Seems like as good a time as any to ramble on for awhile.  2020 is coming to an end so it’s time to recap.  My summer was great - golfing, golfing and more golfing.  For over 20 years I’ve played regularly with the same women and every year we’ve taken a photo.  This year’s is a bit different-

I also worked a bit at Sask Hospital and the end of August I bought a cabin on Maymont Beach which is on Murray Lake.  It’s the most heavenly spot!  I’ve been looking for a place for a few years.  Living in a condo, I don’t have a yard to look after - my garden box on my deck doesn’t keep me busy, nor does the small garden plot I’ve enjoyed for the past four or so years.  I would follow the real estate ads, drive along beaches looking for ‘for sale’ signs and even stop and poke around the odd place but nothing ever felt perfect until this year.  I needed a pretty special place - one on pavement all the way to town so I could ride my motorcycle, a place on a nice beach - not a hill hanger and preferably sand, a cabin cabin - not a house that I have to worry about in the winter - wondering if the heat is still on or if the pipes are frozen, not a fancy place - I want to do some renovations and make it my own and nothing too big or too terribly expensive!  Ha!  Well, while visiting friends/family at Cochin one morning, I learned of this place being for sale.  Jane and I went immediately to have a look and wow!  Walking down the path to the cabin - 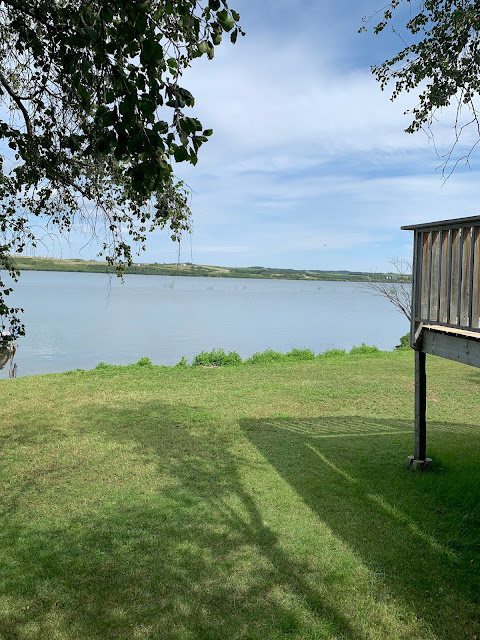 everything just felt right.  The next day I put in an offer and a week later, it was mine!  I took possession August 20 and spent 20 nights there before closing it up for the winter.  I have a long list of renos that will be happening this spring - changing windows and a door, new siding, fascia, soffits and eaves, raising the kitchen corner that is sinking into the sand, replacing the shower with one that allows me to bend over to pick up the soap!, new flooring and paint.  Lionel and I have bought a pontoon boat together so a lift and dock are also required.  The front wooden railing will also be exchanged for glass.  I hope to get everything done this year so from now on I can just sit back and enjoy!  I hope to move there as soon as the water is turned on in May and stay until fall- 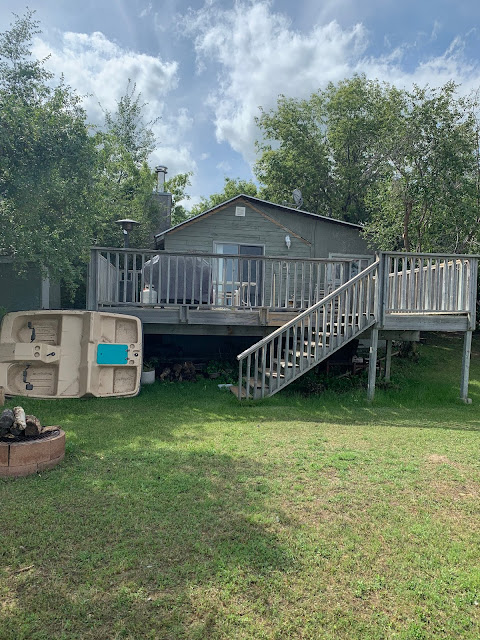 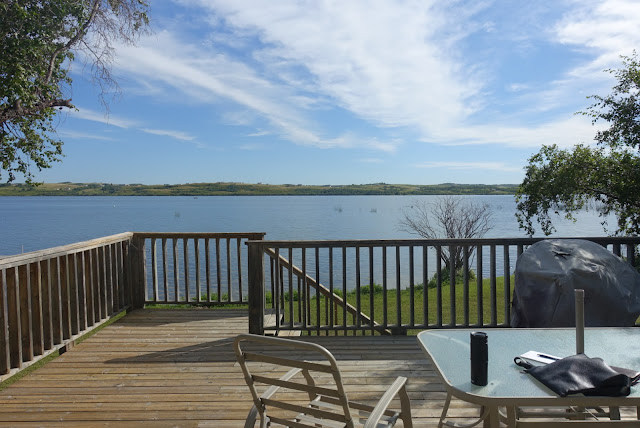 There is a wood burning fireplace, something I will never use, so I removed the grate, screen and doors, painted it and filled it with an electric heat throwing fire that will keep me warm on the cooler nights.  And my couch - a two tone - lime green and cream.  Where on earth would one even find such a thing? 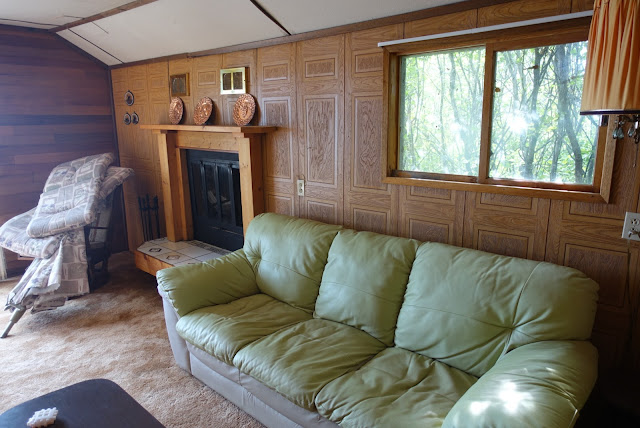 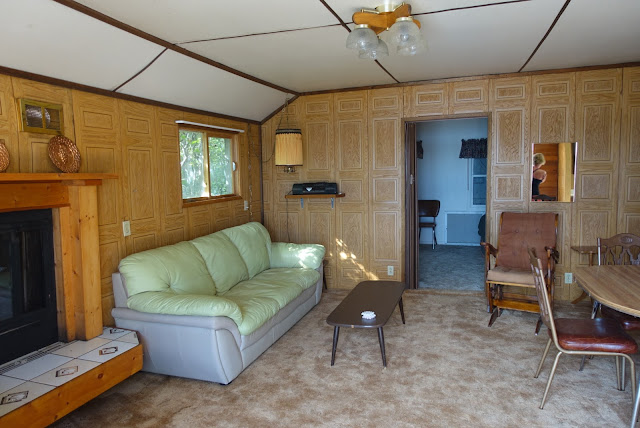 The second bedroom is quite large- 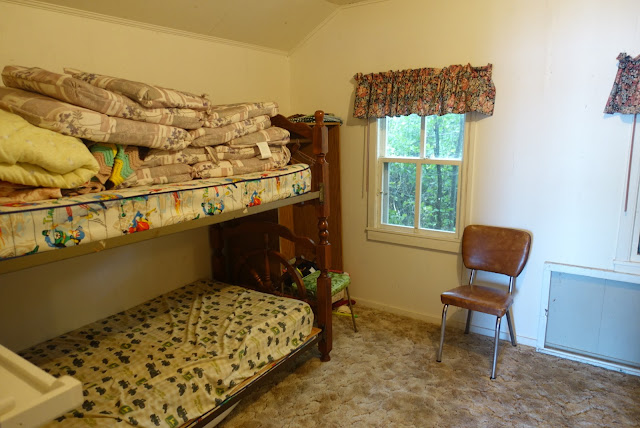 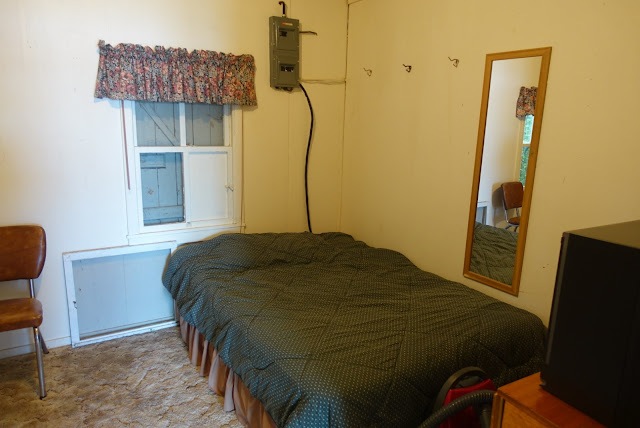 I’m going to get rid of the table and chairs 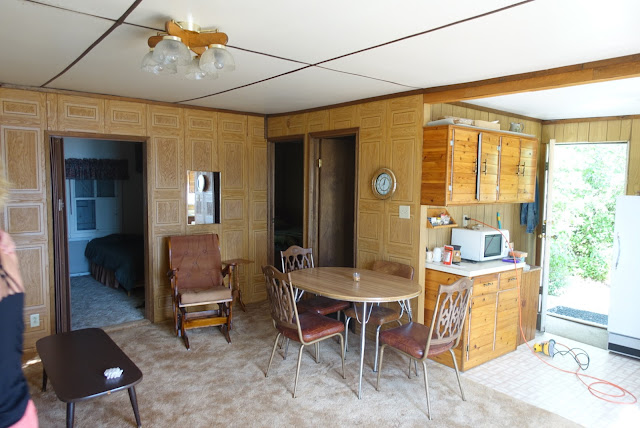 as most meals will be eaten outside.
The shower is too small- 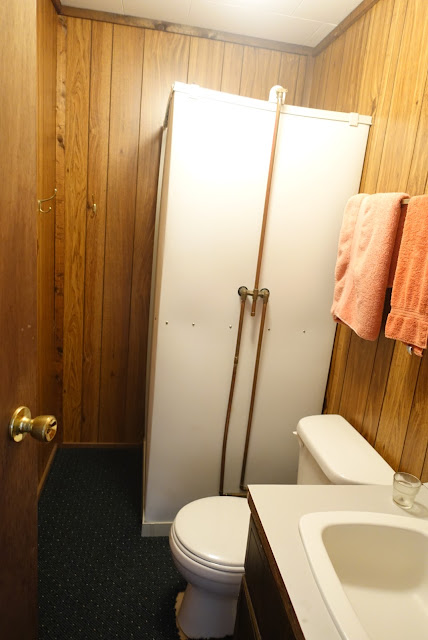 The kitchen is small but adequate- 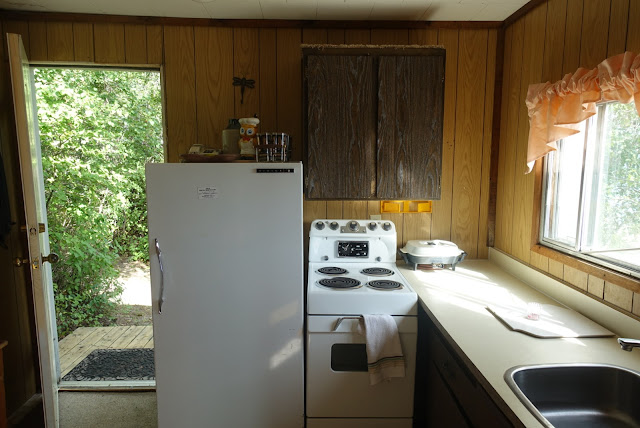 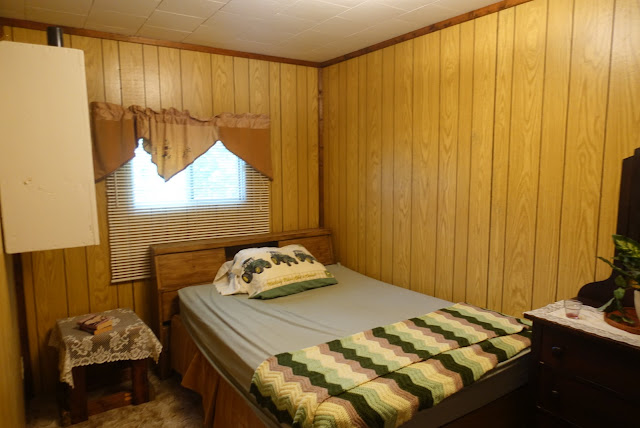 New siding was under the deck.  The previous owners had hired someone to put it on but once he started, he decided he needed more money so they told him to hit the road.  I washed it all and wrapped it well in a tarp so it’s ready to go this spring- 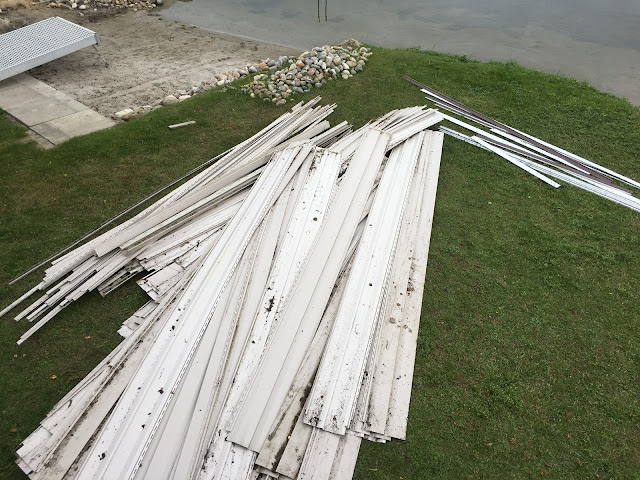 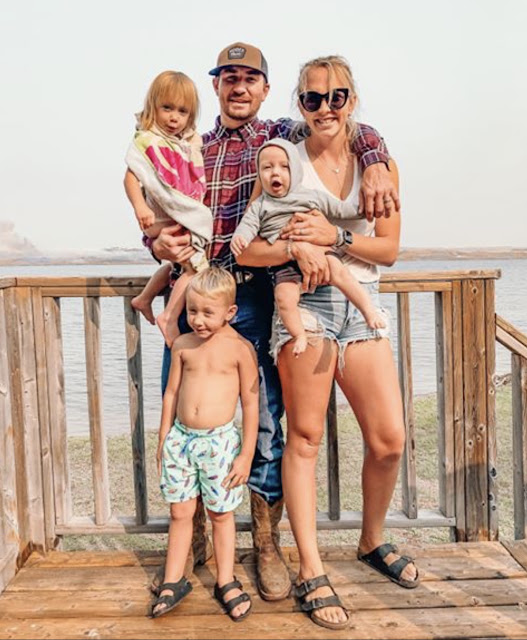 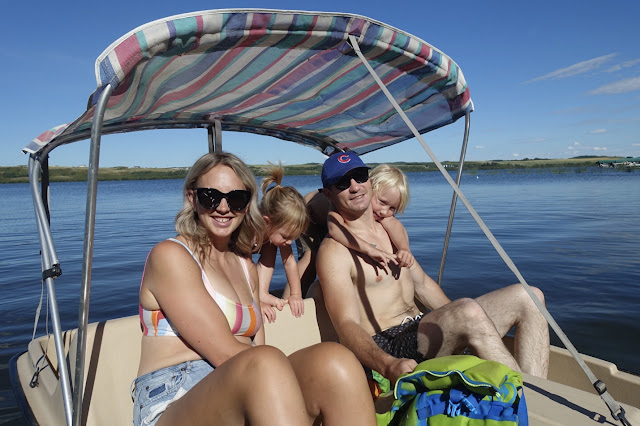 Mom and Dad even came for a visit- 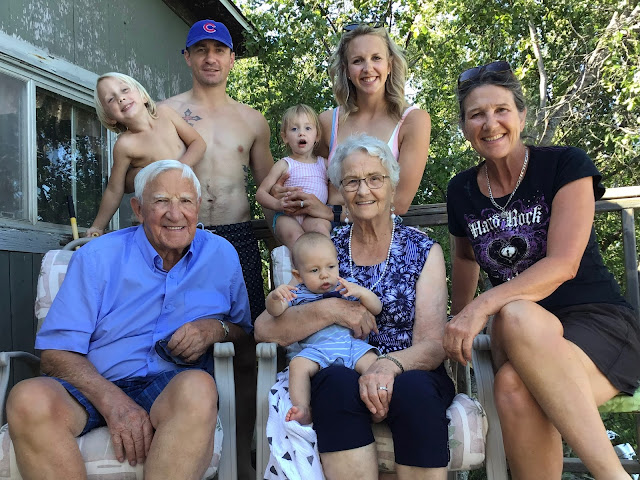 Since golf ended mid October, I’ve been subbing a lot.  It’s something to do and I really enjoy the little kids.  I’ve been to four different schools and each one runs differently because of COVID.  Some schools have normal physed classes in the gym, others are only outside unless it’s -27 or colder.  Some gather outside with their cohorts until the bell rings to start classes, others come in and go directly to their class room.  Some have specific times when students can use the bathrooms while others are allowed to go when they like.  One school division wants subs to not only wear a mask but also a visor!  If you think it’s hard wearing  a mask, throw on a visor and see what that’s like!

I decided that if I was spending the winter at home, I would work as much as possible.  It gives me something to do and the pay is pretty awesome!

Of course, the main reason I stayed home was because of the angels.  Nico is 4.5, Andi 2.5 and Hayes 8 months- 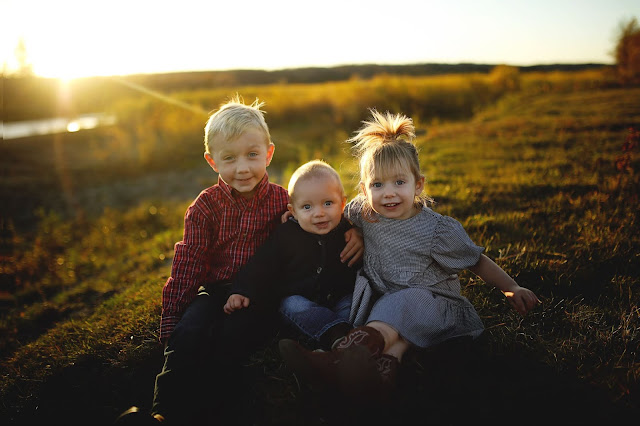 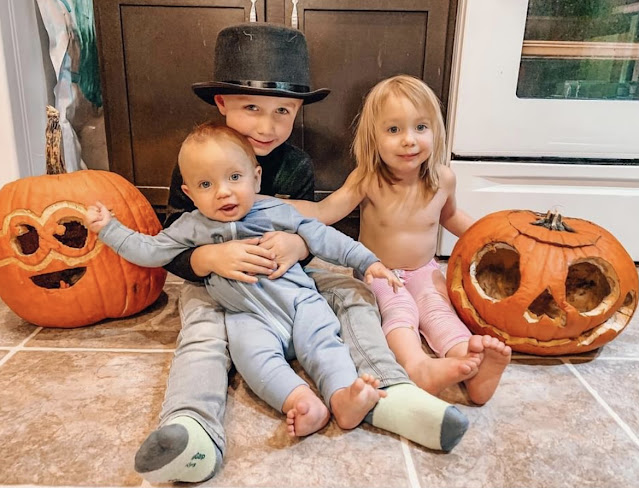 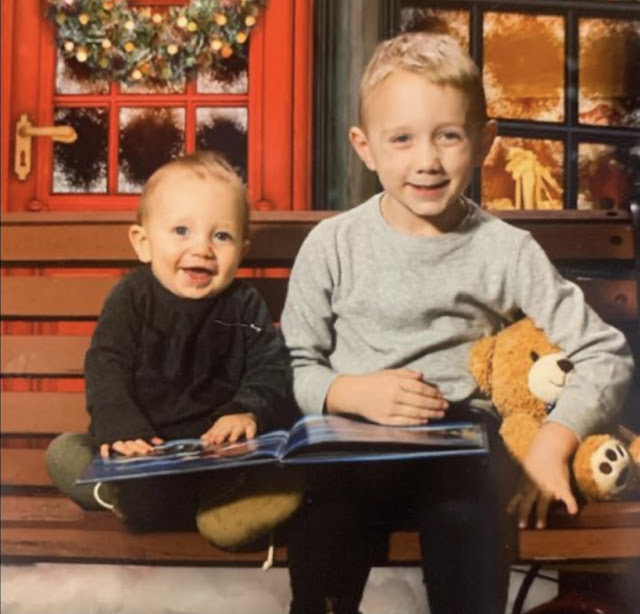 I spend a few nights a month at Jane’s and they come to town once a week so I see them lots.  They sure are growing up fast!