So life, or a form of it, is continuing in spite of Covid.  Saskatchewan has had only one new case the last couple of days and many have recovered.  Moe is talking about slowly re-starting the economy - he’ll let us know the plan next week.  Meanwhile, Easter has come and gone- 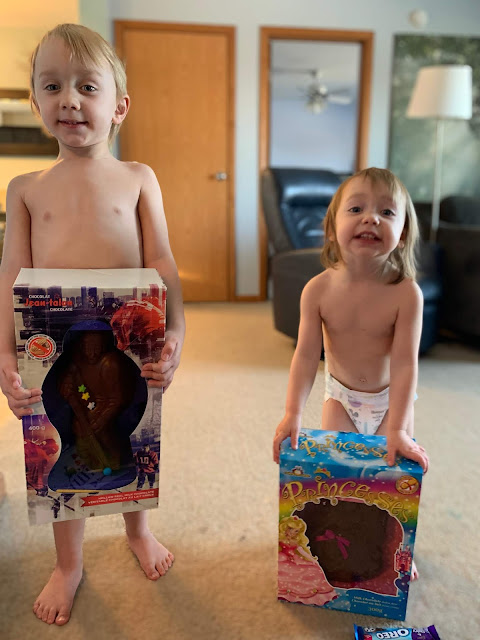 and a former student of mine, Colby Cave, has died.  He was 25 and died of a cyst in his brain.  He played hockey with Boston and Edmonton and was just a wonderful young man - always so friendly. He died in Toronto so the day his family - Mom Jen, Dad Allan and sister Taylor came home, we parked along the highway to show our love.  There were reports of 15 km of vehicles along Highway 16.  Many people wore jerseys and had signs-

Including a fire truck that led the procession- 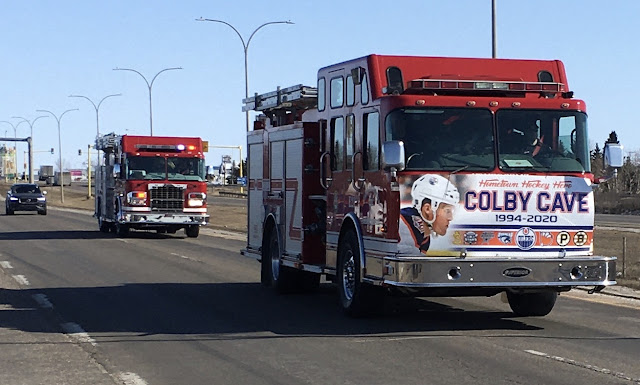 Meanwhile, I’ve been working at Sask Hospital and April 15th, not only did we continue to have our temperature taken but we had to start wearing a mask.  I felt like a handmaid in Margaret Atwood’s book.  It was smothering, itchy and hot.  I’m learning that I don’t handle change very well, which is quite interesting considering the style of travelling I do but once I had my mask on, I instantly hated it and told my boss that I didn’t want to work any more until all this bullshit was over.  He said he’d see what he could do and I think did nothing.  However, as the day disappeared, the mask didn’t seem so bad- 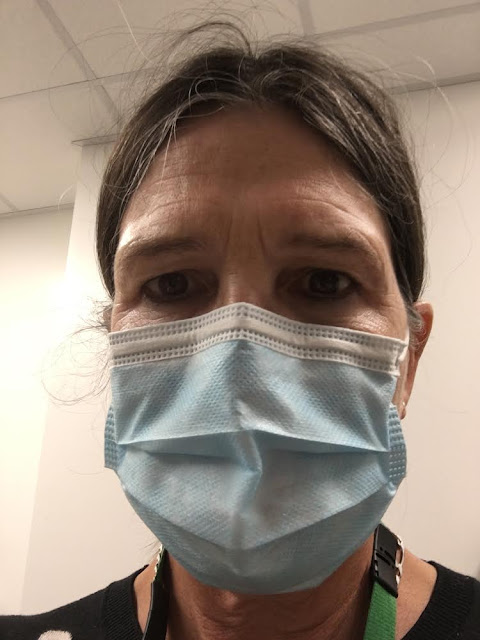 I spent today at Jane’s.  She is going crazy with not being able to even take the kids outside because it’s been so cold and windy and it doesn’t help that she hasn’t been feeling the best.  Today might have been her worst day - nausea and more cramps.  After the kids had a sleep, we went to the ranch and Doctor Nico “helped??” Mitch remove the stitching from a cow who prolapsed, that’s why he’s wearing gloves.  After, we went walking amongst the cows who still have to calve, then side by siding checking on the new calves- 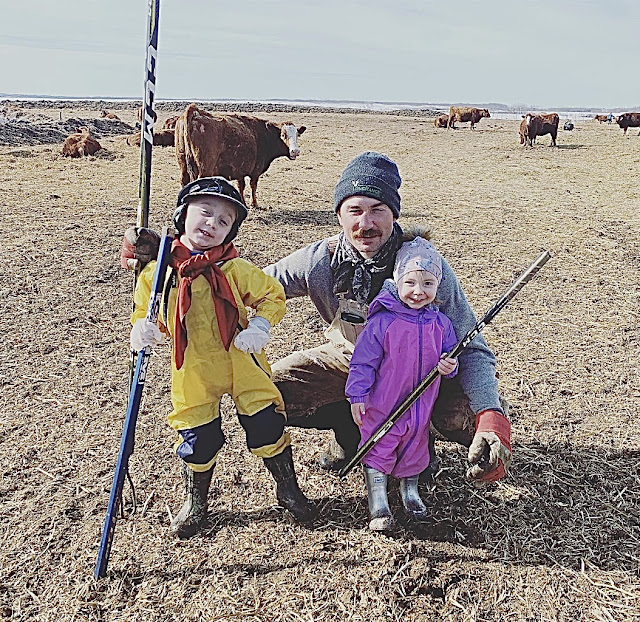 The kids are so funny - each has a walking stick and they love being with their Dad!

So back to the idea of change.  This winter, I was really excited hopping on a bus and moving to a new location but I was often disappointed in my new place.  Once I’d been there a night, it was fine and would end up being perfect - as was the new town or city, but initially I didn’t like it much at all.  The same thing happened this week at work - the first day I walked in and had to fill out a form and have my temperature taken - I was pissed off.  Then again with the mask.  I have to learn to just hold on/hold back my dislike and after a few hours, react.  This seems to be a new reaction to change for me, a weird one actually and I’m wondering why it’s happening.  Is it because I’m getting older and am set in my ways?  Is it because I’m privileged and my life shouldn’t be disrupted?  I’ve always thought I go with the flow and know that I always suggest to others to just give something new some time but it seems that maybe I’m not following my own advice.  Maybe I’ve always been like this and have only become aware.  I’m not sure but I’m not liking my reactions very much.  I guess now that I’ve recognized my issue, I can adapt - at least I hope so!

Looking forward to getting back to some sort of what was.