I wasn't sure how the time change might mess me up but I had a pretty good sleep, eventually getting up about 9:45!  I booked a walking tour at 11 but had to come home and change the battery in my camera and my sock - I only travel with 2 pair but they are merino wool so are good for about a week in between washings - that's the truth!  Unfortunately one has a hole in the heel and it was giving me a blister so now I'm down to 3 socks total.  Wish I'd have known that before I left.  Oh well.  Needless to say, I missed the tour, which just meant I had to wander alone under the clear blue sky and warm sun!  Darn!
My first stop was at a huge Desigual store - 5 floors to be exact.  It's a clothing company based out of Barcelona, Spain and I love their clothes.  I tried on quite a few things but decided it just wasn't worth carrying around something for the next 6 months or so.  I continued walking and eventually ended up at Plaza España which dates back to the 18th century.  The monument, built in 1925, is dedicated to Miguel de Cervantes Saavedra, a Spanish novelist, poet and playwright- 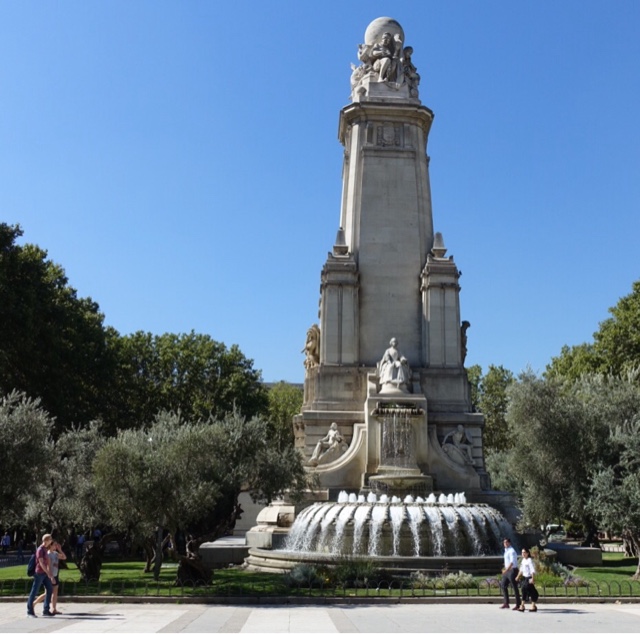 On the other side are sculptures of Don Quixote and Sancho Panza.  Cervantes wrote Don Quixote and the story is about the adventures of a noble hidalgo named Alonso Quixano who reads so many chivalric romances that he loses his sanity and decides to become a knight-errant (caballero andante), reviving chivalry and serving his country under the name Don Quixote de la Mancha. He recruits a simple farmer, Sancho Panza as his squire, who often employs a unique, earthy wit in dealing with Don Quixote's rhetorical orations on antiquated knighthood.  Don Quixote, in the first part of the book, does not see the world for what it is and prefers to imagine that he is living out a knightly story- 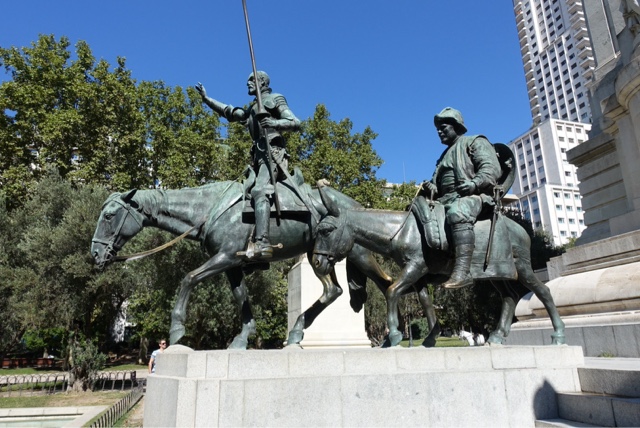 In the distance are the Torre de Madrid and the Edificio España, two of Madrid's tallest buildings- 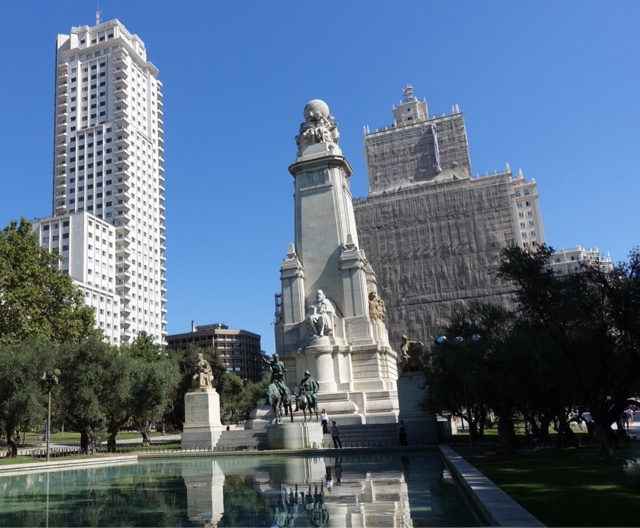 It's wonderful walking along the streets of Madrid.  It's a very modern city with new buildings made to look old.  The architecture is gorgeous- 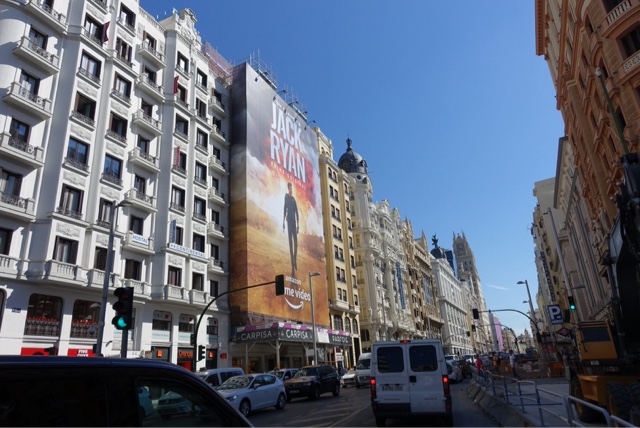 In the Plaza Oriente is a monument to King Philip IV dating from the 17th century.  The Royal Palace is in the background- 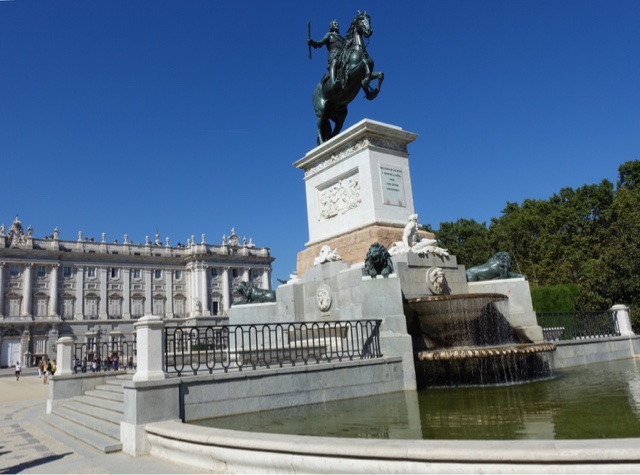 Él Palacio Real is Madrid's largest building and the largest Royal Palace in Western Europe.  It's got nothing on Versailles but.....  There are 3418 rooms but I only saw about 20 which was plenty- 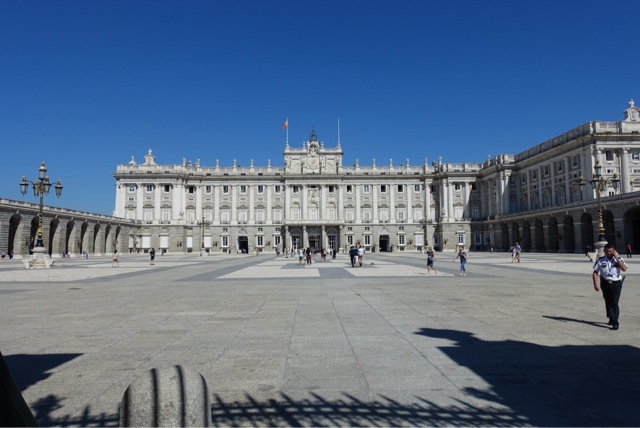 The only pictures allowed were in the main staircase- 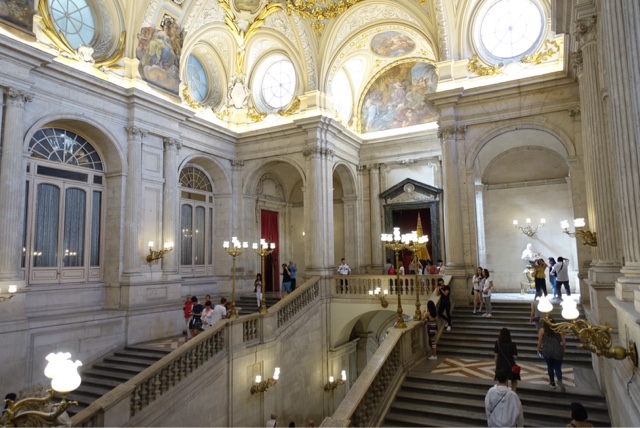 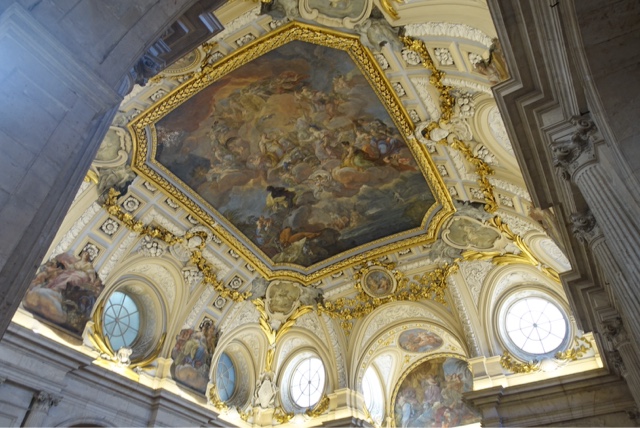 In the Hall of Columns is another fresco by Giaquinto called the Birth of the Sun and the Triumph of  Bacchus.  This is also the room where King Juan Carlos I abdicated in 2014- 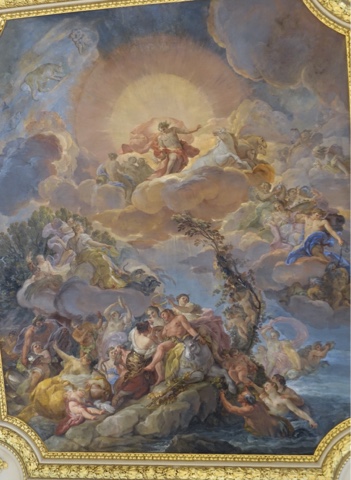 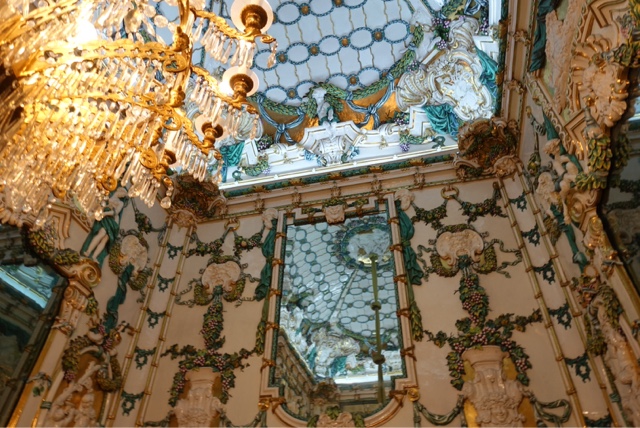 The best part of the visit was in the Royal Armoury where there is some actual armour worn by Charles V.  No pictures were allowed but I snuck a few.  The horse's armour weighed 30 kg and the man's weighed 25 kg.  They had pieces of armour for every part of the body of the man and the horse- 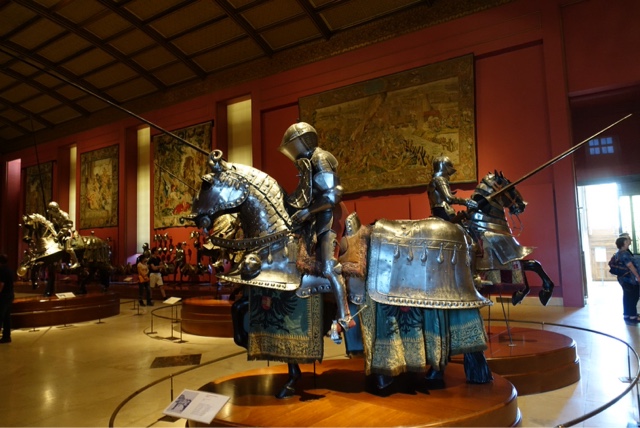 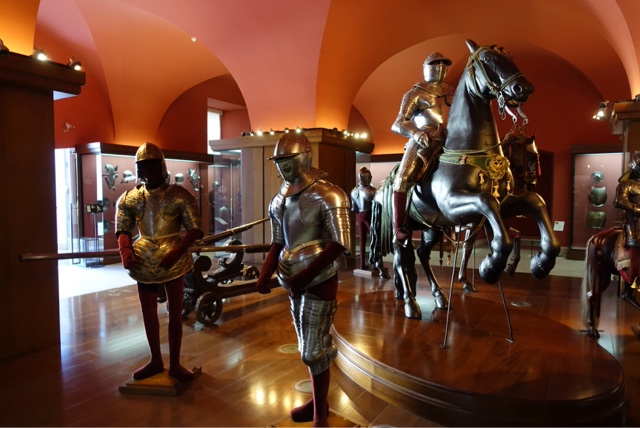 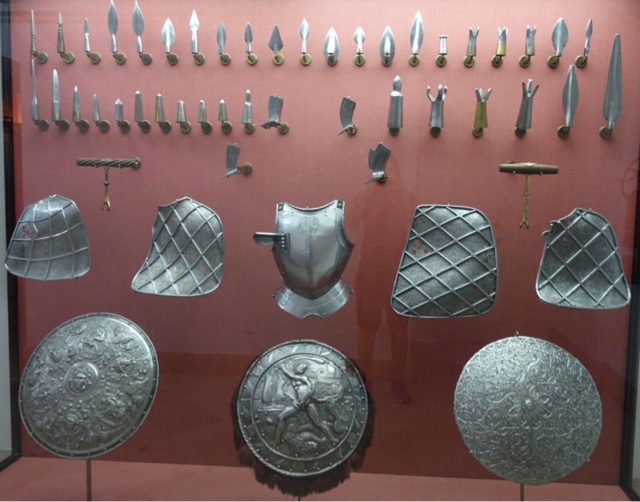 There were even uniforms for the kids- 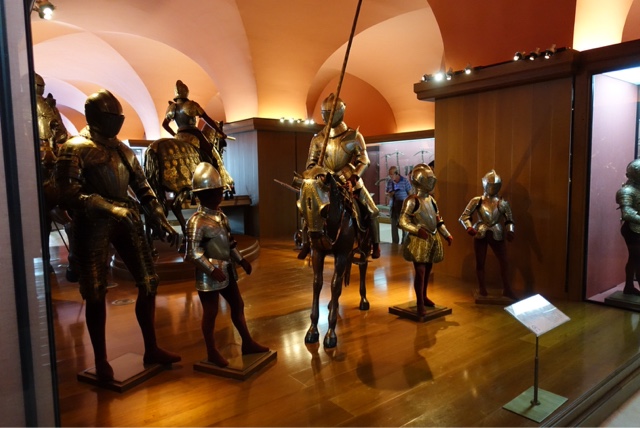 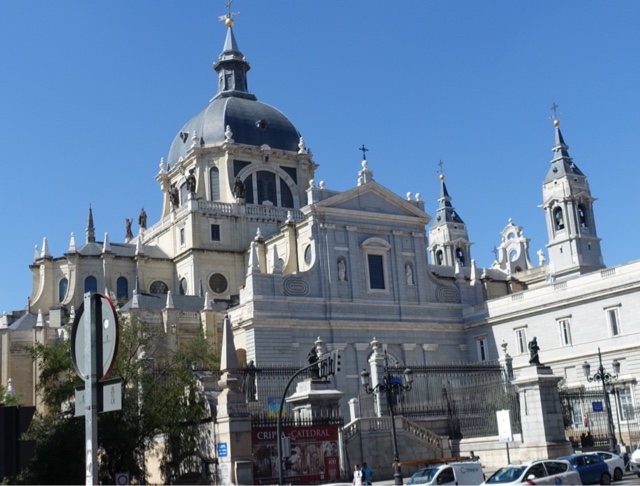 Barrio de la Latina is packed with restaurants.  Eventually I chose a hole in the wall and had él menu de dia which included sangria and gazpacho - cold tomato soup- 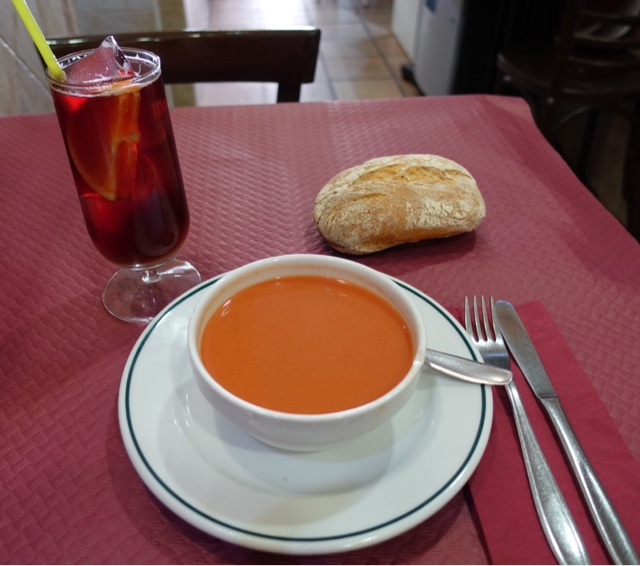 Tomatoes, green peppers, cucumber and onions are added to the gazpacho- 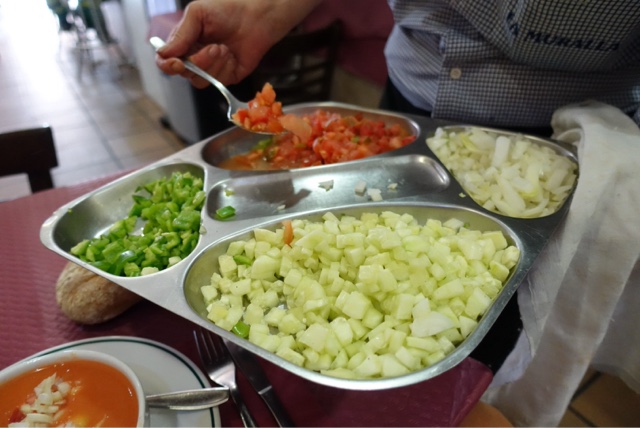 My entrée was pollo asado and frites - why is you never have to specify you want your fries really hot anywhere else but in Canada?  And for dessert - crème brûlée with real whipped cream- 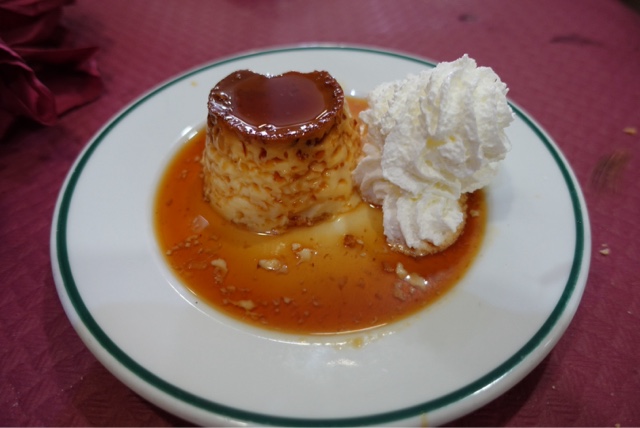 I started out at an outside table but it was really hot and it costs an extra 2 Euro to eat outside so I moved in to the cool comfort of AC.
Continuing to wandering, I came upon Plaza Mayor.  It's a large rectangle, 423 by 308 feet and surrounded by three story residential buildings with 237 balconies facing the square. There are 9 arched entrances on the corners- 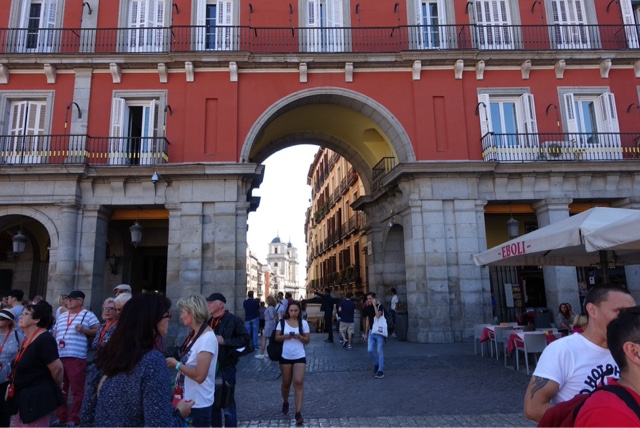 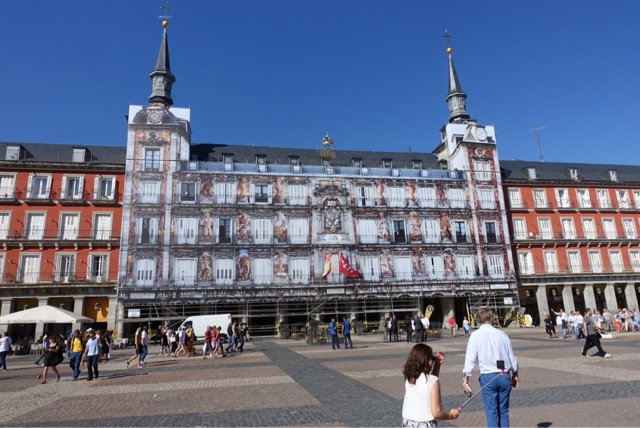 The bronze statue in the middle of the square is King Philip III, created in 1616 by Jean Boulogne- 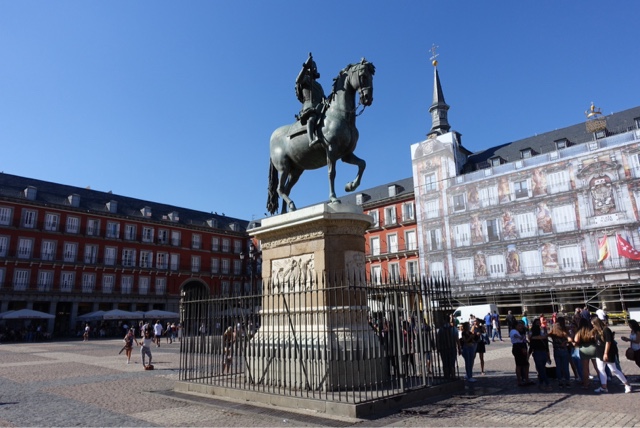 Close to the Plaza is the Mercado San Miguel which is a gastronomic paradise.  Tapas are readily available for 1-2 Euros or $1.50 - $3.00.  I was so full from lunch I didn't try anything but there's always tomorrow.  Here are pickled mussels, marinated herring with mustard and marinated herring with avocado- 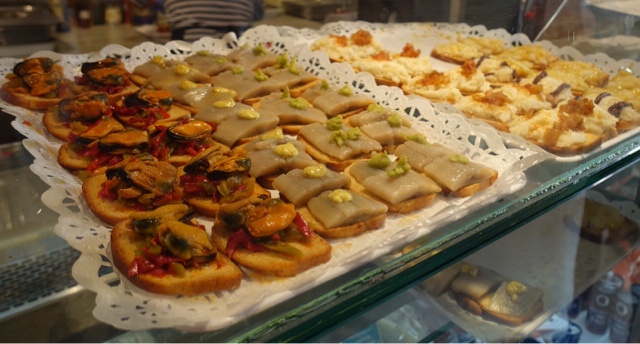 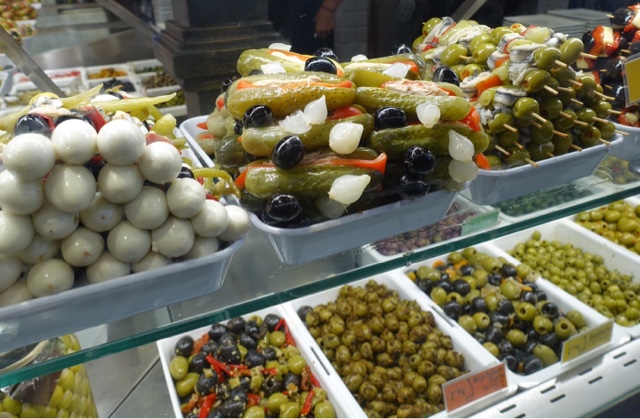 Stuffed peppers with smoked salmon and queso or sausage, as well as stuffed olives- 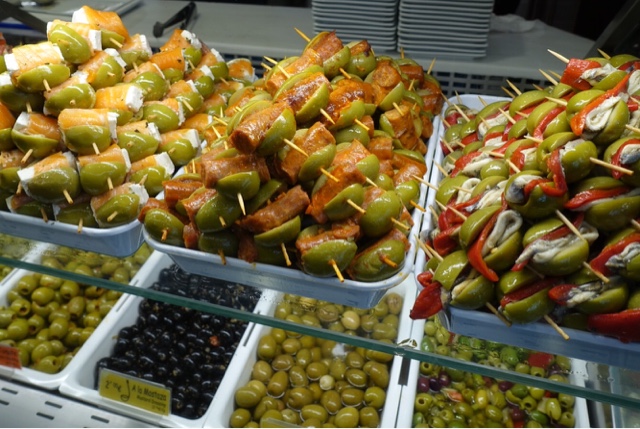 For dessert, there was ice cream and baklava- 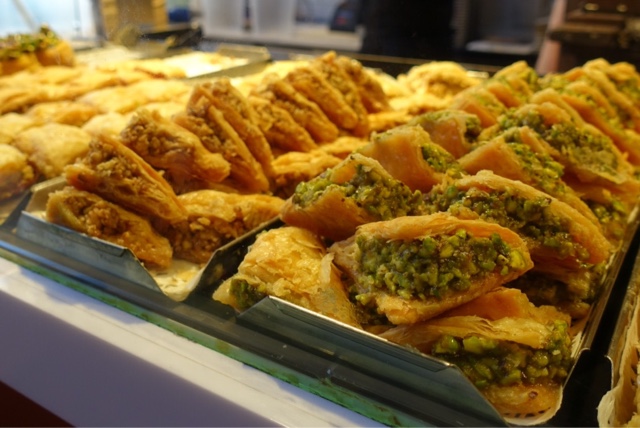 I was getting tired so started heading back to my hostel.  Madrid has many winding, narrow streets- 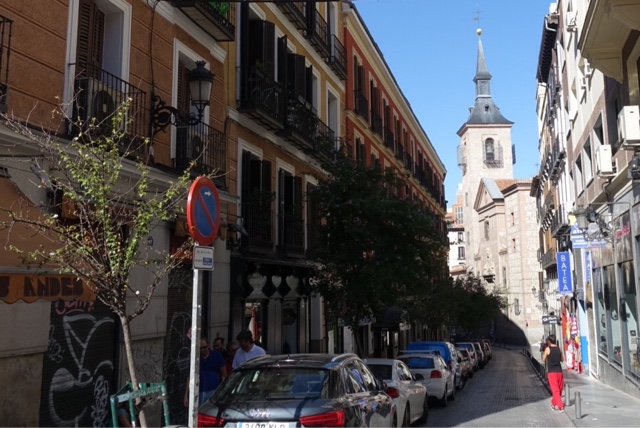 I guess a visit to Madrid isn't complete without a stop at Chocolateria San Gines.  It's been around since 1894 and is open 24 hours/day.  Maybe I'll try it tomorrow- 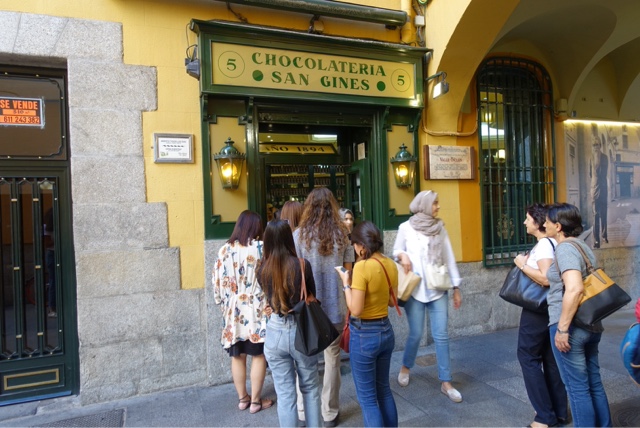 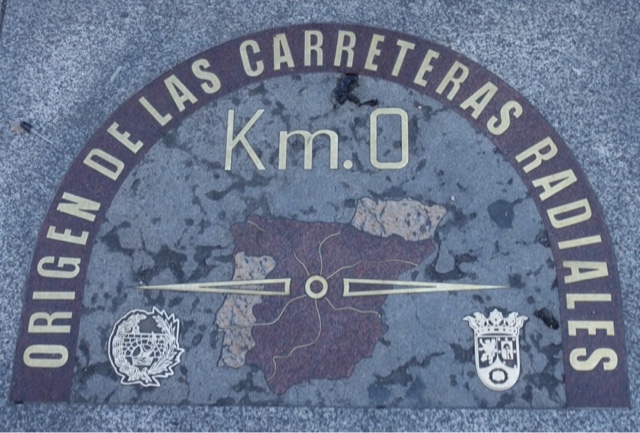 And Él Oso y el Madroño, a 20 ton statue of a bear eating fruit from a tree- 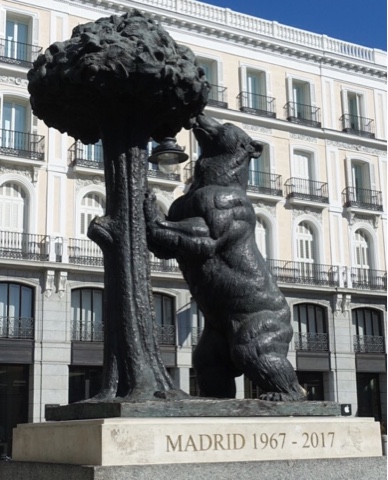 Looking forward to more Madrid tomorrow and a flamenco dance in the evening!
at September 28, 2018