I've had a great summer: the weather was nice, until September which has been unusually cold and wet, the golf course was in great shape, I did a bit of travelling, working, hanging out with friends and biking.  Life is good.
Just about had this one! 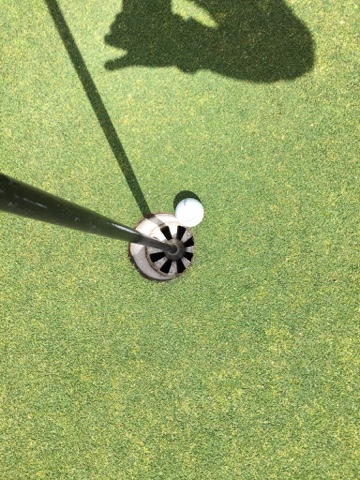 While visiting family in Brooks, Alberta, I made a surprise visit to see Tim Truman, a high school classmate.  We hadn't seen each other in 35 years- 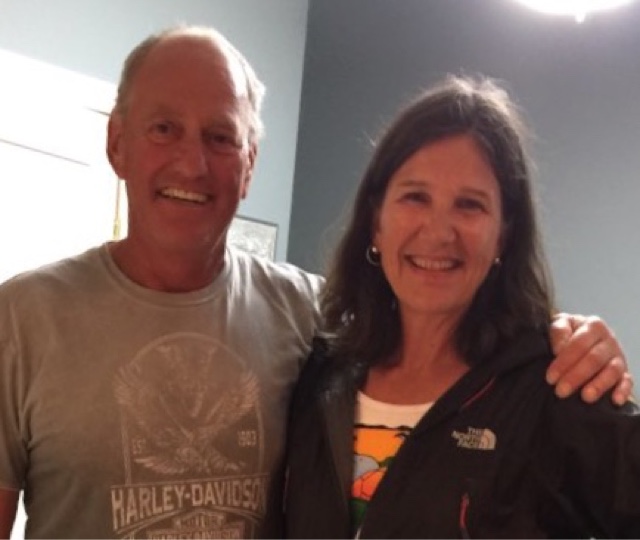 No summer is complete without a visit to Pincher Creek, AB to see my brother Dean and his wife Tammy- 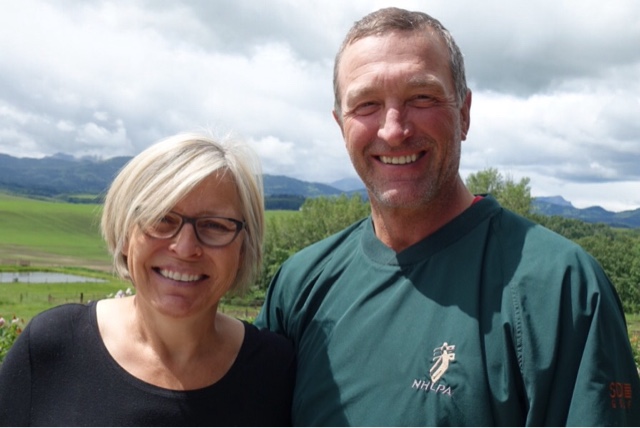 My cousin David and his family are from Ottawa.  They were visiting in Cochrane, AB with my godparents, Norm and Betty Lee.  It was great to see them and other cousins after 15+ years- 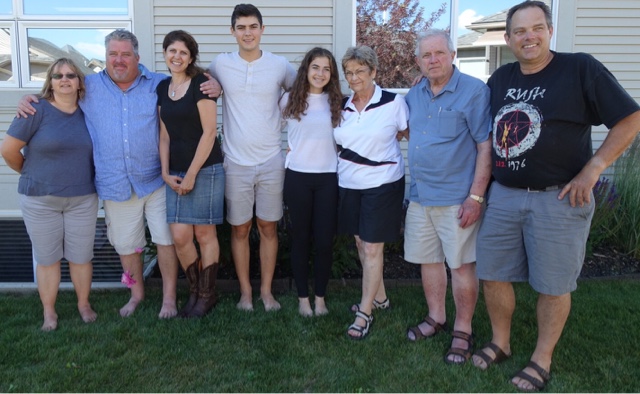 My cousin Gary lives just outside Calgary, AB with his family- 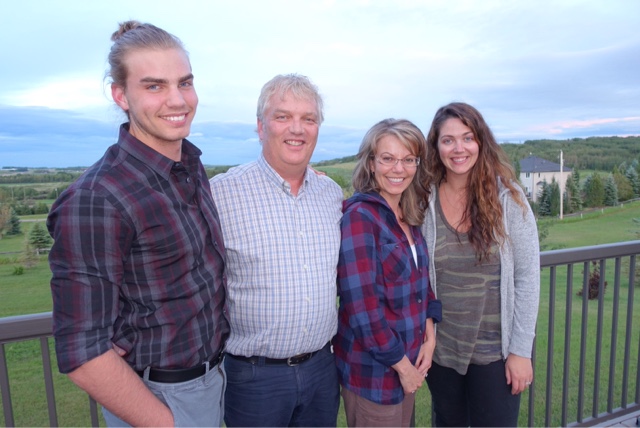 Calgary Stampede is "The Greatest Show on Earth".  If you hugged this Coke machine, a pop would fall out for free- 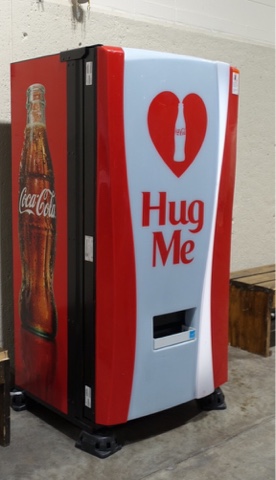 The Stampede also means rodeo.  I had a ringside seat- 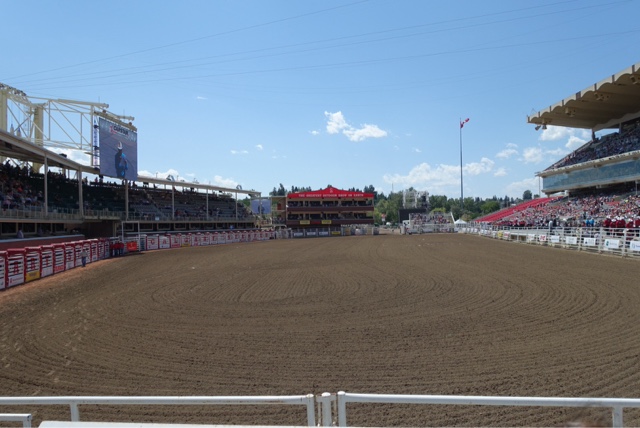 Weird food concoctions are also part of Stampede.  Two cruellers are stuffed with a Reese's peanut butter cup and chocolate, then pressed together like a panini and covered with chocolate sauce and whipped cream.  A weiner, dill pickle and cheese are wrapped in a tortilla and deep fried- 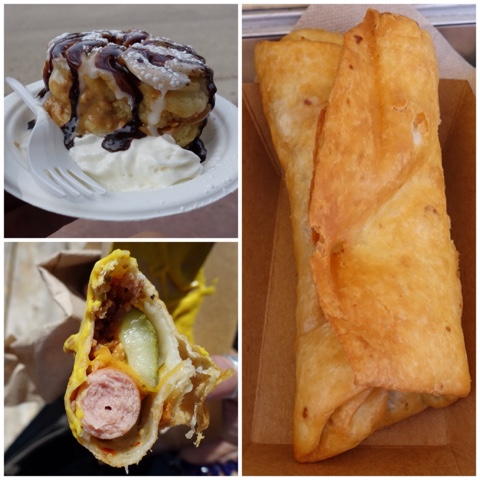 Cookie dough is deep fried and served with chocolate sauce- 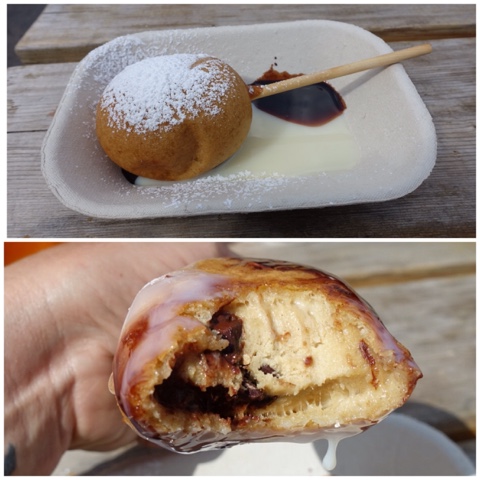 My "Group Therapy" friends and I made a trip to Saskatoon on Gus the Bus.  He's a former city bus that friends have bought to use as a party machine.  We went to ride on "The Prairie Lily", a 120 passenger river boat that cruises the South Saskatchewan- 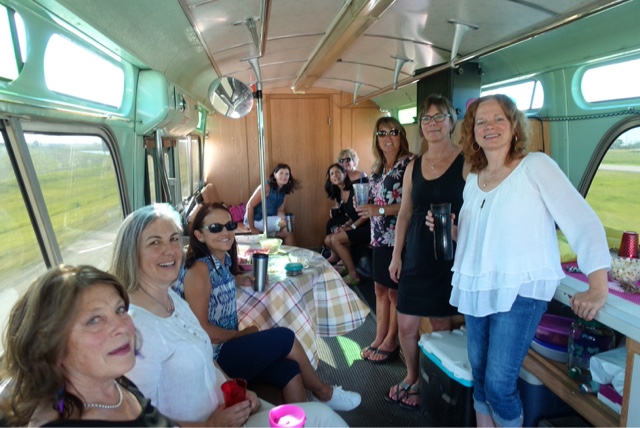 Lynne and I attended a Rider game at Mosaic Stadium in Regina.  Unfortunately the Riders sucked but it was still a lot of fun- 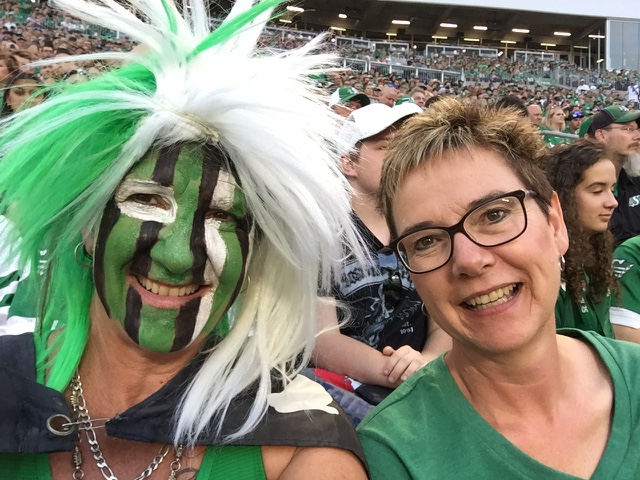 We had quite a few smoky days, thanks to the fires burning in British Colombia.  August 15 was a weird day.  The sky was orange and so dark that street lights came on.  These photos were taken an hour apart, at noon and then at 1 pm- 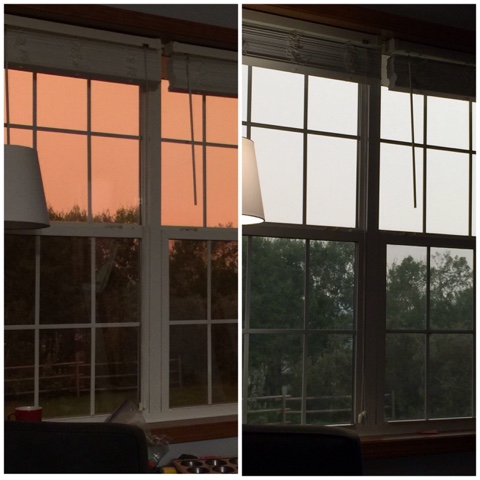 Summer means going to the lake too.  My hockey pool team - "What the Puck?" spent a fun night at Sharon's cabin on the creek at Jackfish Lake- 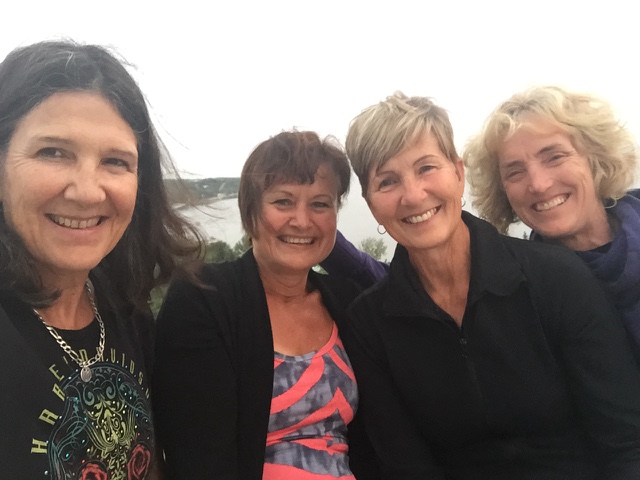 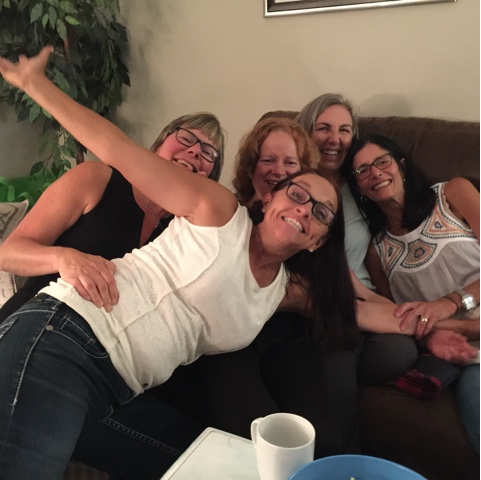 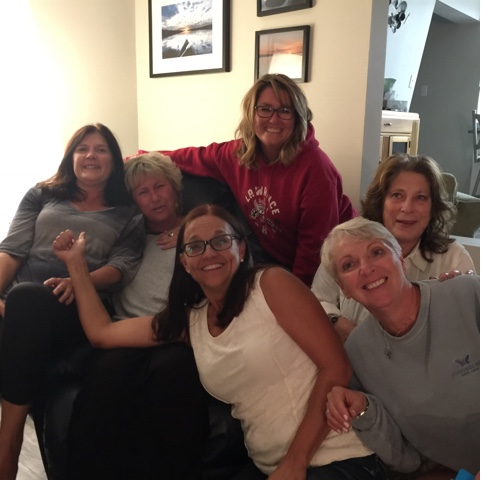 Six of us went to Regina the end of August to watch the LPGA and Canada's own Brooke Henderson, who won- 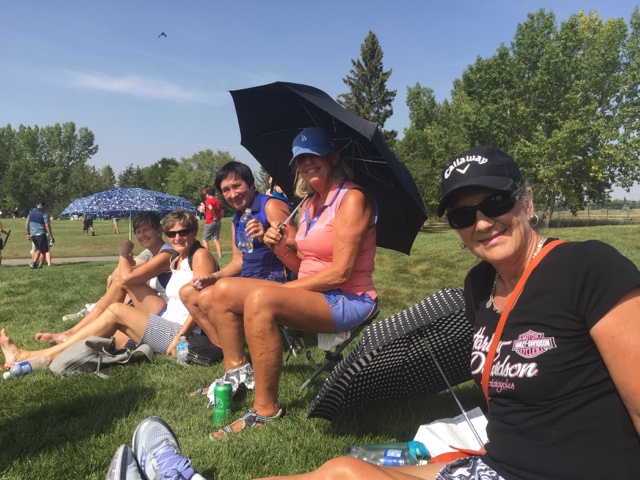 Dorothy surprised me with a visit in August so we went to Edam to see Lucie.  We three graduated from Redvers High School in 1979- 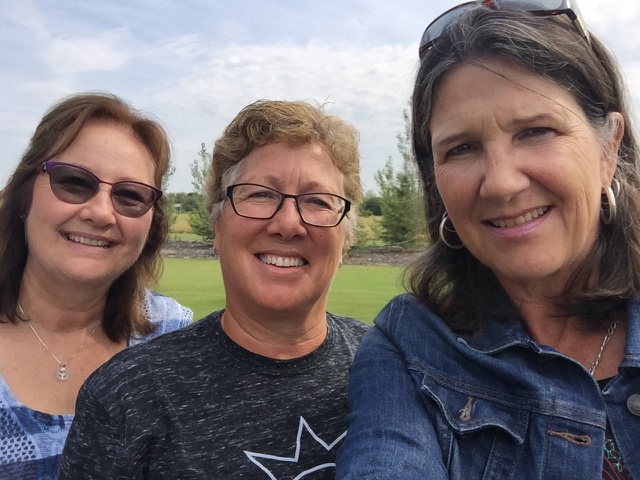 I spent a lot of time with Jane and the kids- 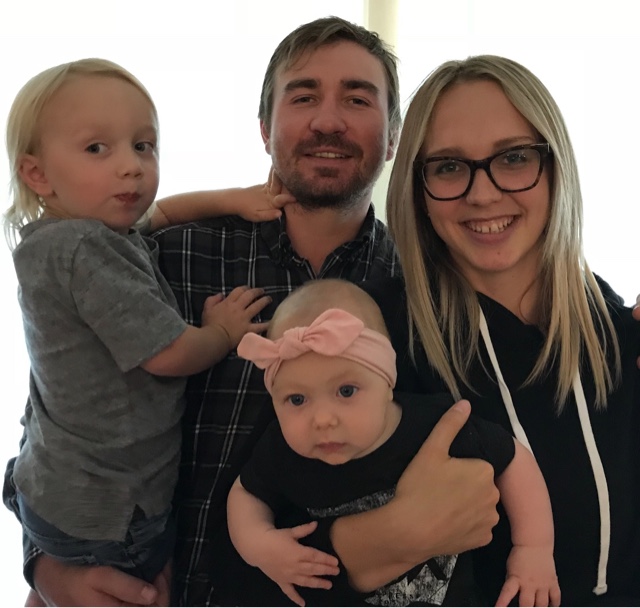 and visiting my parents in Saskatoon- 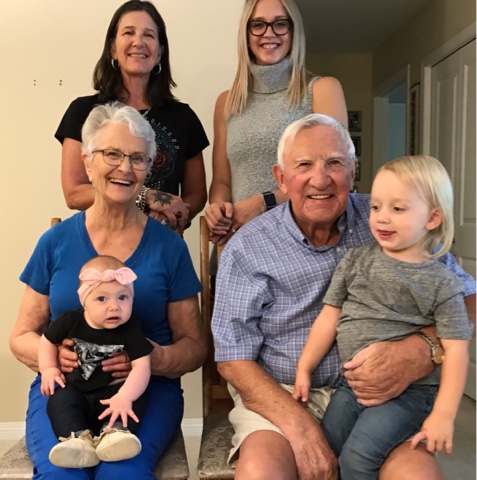 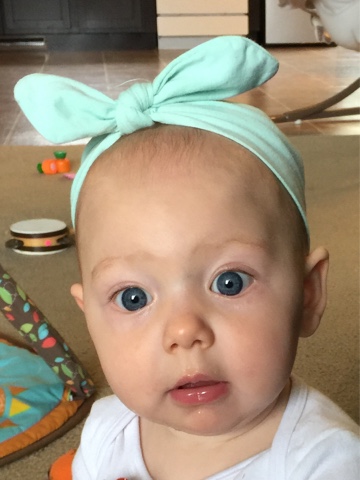 Nico is so much fun and pretty much toilet trained! 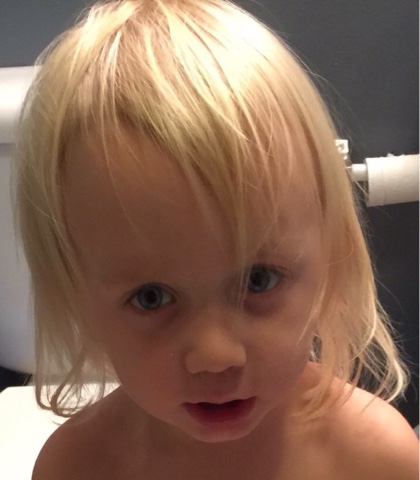 Golf has mostly finished and I didn't play as much as I would have liked.  I worked full time in May and June at my old job.  The woman who replaced me went on maternity leave so I thought I might as well earn some good money.  The first week was crazy, but once I got back into the swing of things, I really enjoyed it.  I also worked a few days at Sask Hospital so work, combined with spending time with Jane and the kids cut into my golf.  That's okay, there's always next year!
Darcy, Cindy, Janet and I have been playing together regularly for close to 20 years.  We take a group picture every fall- 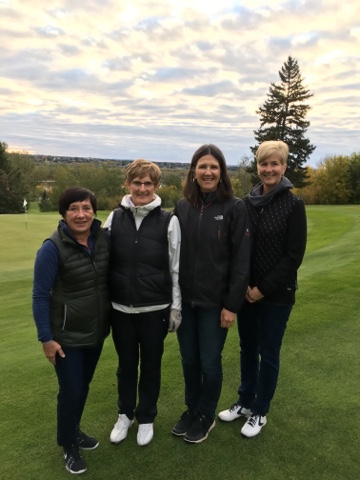 The past 6 months have been awesome and flown by.  Lately I've been busy planning my next trip - I leave September 26 for Spain!  Looking forward to it!
at September 24, 2018