Happy Halloween, although there is no evidence of that celebration here.  It’s Day of the Dead but I was way too occupied doing other things than to get to the Malecon to check it out. Tomorrow.

So this morning, Alberto, from now on known as Liar #1, was waiting outside my hostel, waving to me while I closed my bedroom window.  We had an appointment at 9 to go to Vellas Villas for breakfast and a tour.  At no time did he tell me there would be a presentation but I knew what I was getting into.  This all started at the airport the day I arrived.  However, as I was leaving the Canova Hostel, one of the 2 fine young men who work there told me we had a bit of a predicament.  They had a football - soccer to you and me, team coming today and I had to move out of my room, the room I paid for back in August.  I had a few options: I could sleep on a narrow couch in the “studio” which is an open air living room.  Music blares until at least midnight, so that was not for me.  Second, I could sleep in another makeshift area - no fricking way, or third, I could move next door to Vallarta Boutique Hostel and they would pay for the next 3 nights.  Done deal.  I had my stuff packed in minutes and they even delivered it later in the day because that hostel was closed when we tried at 9 am.

Liar #1 and I caught a cab to the lovely hotel.  Along the way he told me about his family - he has a wife and four kids in Chicago - maybe.  He came to PV to make some money and eventually bring them here- maybe.  He misses them and is often lonely but he hopes it’s worth it- maybe.  Once in the lobby, where they also have a Day of the Dead display- 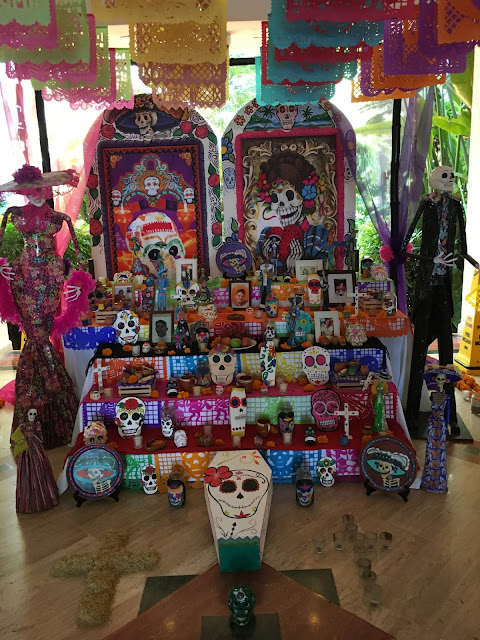 I had to give him my invitation and then fill out another form with my address etc.  He had to see my passport and a credit card.  He reminded me what I had been promised - cab ride home ($15), breakfast and a massage.  I told him Lauretta, another hustler I met yesterday, had told me there should be some money in this for me  He lied, I think and said that no, he was only getting $25 to bring me here.  Whatever.  He’s got a family in Chicago??? and needs the money more than me.  Next we went upstairs, to eat I was hoping, but no, to meet Ignacio, Liar #2, a tall man who is also a psychotherapist in the afternoons.  We talked, well actually, he talked and while filling out another form, asked me a lot of questions including asking me to describe my last 3 vacations.  He sat there with his mouth hanging open.  I think he thought he had a sale and was spending his commission while I told him where I’ve been the last while.  Next I was introduced to his boss - Joe, Liar #3 from St. Louis, MO and then we finally had breakfast. Bacon, bacon and more bacon.  Who knows when I’ll get it again!  After breakfast, I had to fill out another form and then Liar #2 asked me about any questions I had.  I had none. I told him I had no idea what to ask because I didn’t know exactly how this worked so he came up with 8, one being what benefits do teachers get.  This was getting weirder all the time but whatever.  So then, Liar #2 disappeared and Liar #3 was back.  He wanted to show me some of the options on a computer downstairs in the lobby so away we went.  While he prepared the computer, I stared at the wall.  When the site was loaded, in order for me to see, I had to lean across a desk and get close to the screen.  That was odd I thought for a swanky place like this so I thought oh, he knows I’m not buying and we are just jumping through the hoops.  No.  After, we went back upstairs and he said so what do you think?  What do I think?  I think I need more information, like how much does it cost?  Yes, but are you interested?  Yes, it’s an interesting concept but I need more information.  So, using a Sharpie, he drew, upside down and scribbled and talked very quickly.  Now what do you think?  I need time to think about this.  Oh no, were you not told you had to give a yes or no answer.  I’ll give an answer all right.  Fuck off.  No I wasn’t.  Oh.  So he needed my driver’s license to prove I was interested and then came back with prices.  10,000 US for 5 weeks, 1/year in a Vellas Resort in Mexico, then 100 weeks in over 350,000 resorts and hotels around the world and believe it or not, 5 adults can go, during high season - January, for less than $500 US.  That is true.  I saw it on the computer.  I asked if he had this information in a document that I could study and then decide.  No.  I said I needed to think about it.  He said this is a one shot deal.  It’s yes or no.  I said I would like to talk to some people who have done it to get their perspective - he said you will hear good things and bad things.  When I finally said No, he threw himself back in his chair and said rather loudly “ You have got to be kidding me!  I thought for sure based on your past travel history that this would be perfect for you!“  I then explained how I’ve been travelling these past 6 years - in a large truck or on a public bus, where I sleep - in a tent or in a gravel pit or in a shithole hostel.  So, $10,000 quickly dropped to $8000 which quickly dropped to $6000 plus about $1200 in closing costs and that’s when I told him he’d lost me.  I told him that if he could go to $6000 just like that, how was I to believe him that that was as low as he could go.  So, I said thank you and was taken downstairs by a woman who was friendly, to get my gifts.  The gift man forgot to give me my $20 deposit back - sorry about that, and with massage coupon in hand, I headed for the spa to have it done before they phoned and cancelled on me.  It was a deep full body massage, well, not full, full body :) and I don’t think it was a full hour but it was enough.  Then when I was leaving, the boss lady barked at me - wasn’t I leaving a propina?  Okay. 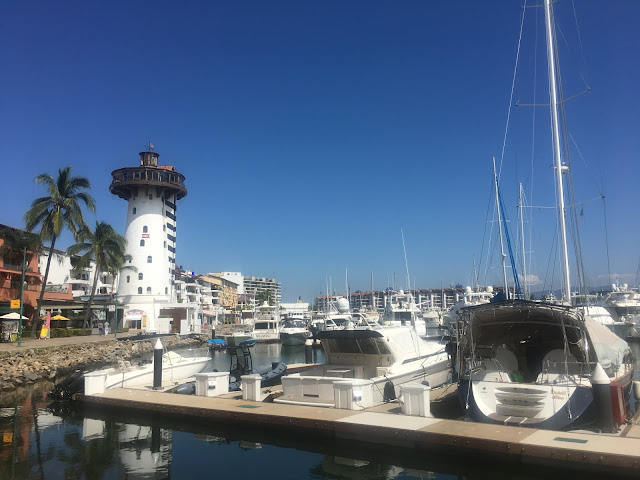 Close to the spa was a place I could have my toes “gelished” for $10 and next to it was a restaurant where I had rez con jugo, complete with pepino, salsa piquante, jalapeños and salsa verde aka fire- 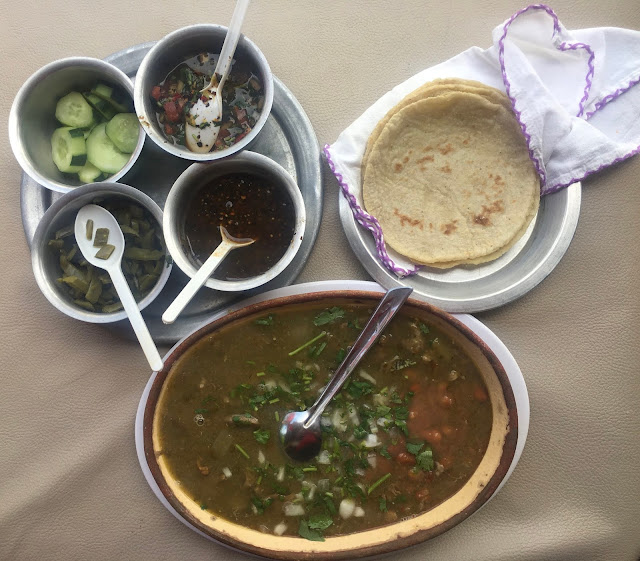 Delicioso!  And no meal is complete without just made tortillas.  From here I ended up walking to the aeropuerto- really not that far away, and took a bus to Nuevo Vallarta to check out where Jane, Nico, Andi and I will be staying January 15-29.  Wow is all I can say.  Grandma’s going to be doing a lot of subbing when she gets home!  The entrance is a roundabout with a pyramid- 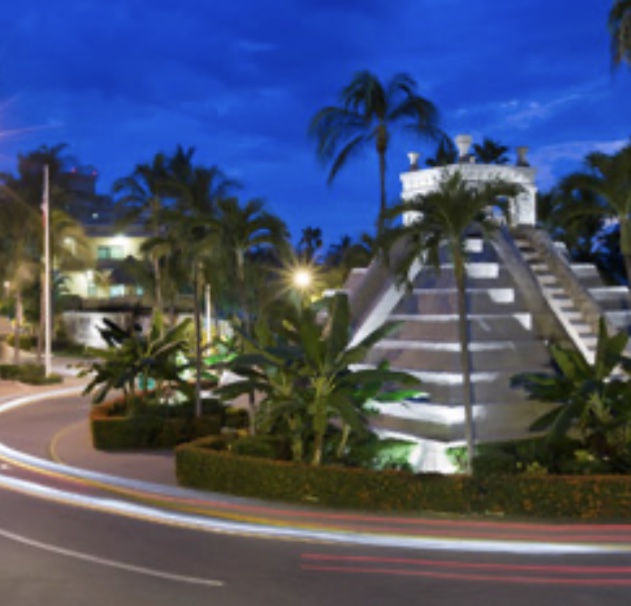 and unfortunately security wouldn’t let me in.  They called the concierge for me who said there were too many people around to let me in and then I spoke to reservations because I made the booking through hotwire.com and they only ask for children aged 2 plus so that excludes Andi.  I didn’t want a room for 3 but for 4 so the woman made a note on my reservation.  Views from google- 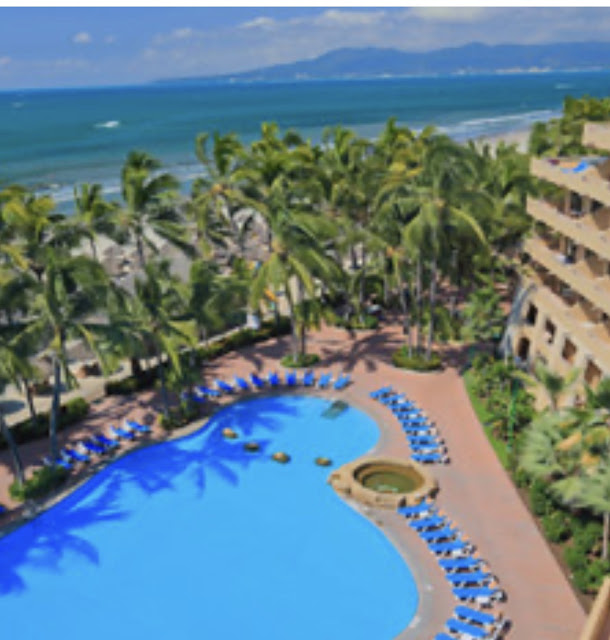 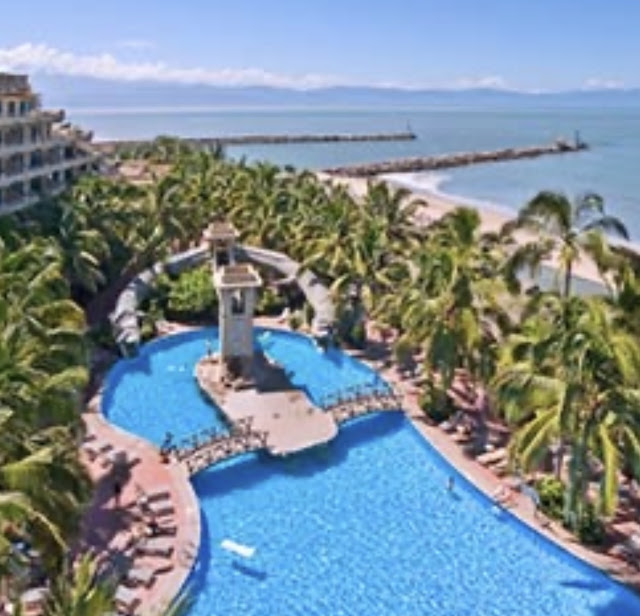 Next door is a mall with a great supermercado where we can buy food.  We’ve rented a condo so we won’t be eating their meals which is fine with me, except I wouldn’t mind a fancy dessert now and then.
It took me an hour to get home and I moved into my new hostel.  Can you believe it - there’s hot water, the toilets flush, the showers work and are clean, you can put toilet paper into the toilet, they have blankets and a beautiful rooftop terrace that looks to the water and a fully stocked kitchen with a fridge. Awesome!  All for the same money too!
Tonight will be early because I’m exhausted.  My room no longer faces the busy street so I’m hoping for an excellent sleep!