I had a much better sleep, thank goodness, and learned this morning that the big group who forced 6 of us out of the pigsty into the palace, left the pigsty last night for another place!  They were disgusted with the showers and toilets so now Canova Hostel is empty!  It’s really too bad because the two very friendly and kind men who rent it have got some tough decisions to make.  Here, I’ve been visiting with a woman from Brisbane who’s been travelling 3.5 months.  She started in L.A but moved to an Air BNB today because she couldn’t stand Canova.  Another woman named Karen is from Montreal and is a gambler.  She spent all day yesterday in the Casino.  I’m not sure if she was there for the opportunity to make money - she says she lost yesterday, or for the free beer!  Another couple from Germany spent the day at the airport trying to sort out their flight to Mexico City today.  Unfortunately they booked with Interjet who is now in financial difficulty and their flight won’t go until the 15th!  They’re not sure what to do.

The owner of Hostel Boutique Vallarta, Carlos, has spent the last few months gutting and redoing his place.  It costs $20 to stay here and that includes breakfast with eggs, but interestingly enough, eggs only cost 17 cents each, yet Canova couldn’t figure that one out.  There’s a gorgeous rooftop terrace- 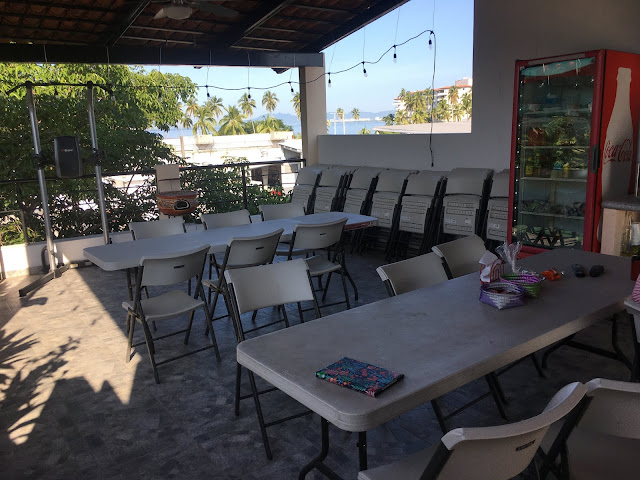 looking towards the ocean- 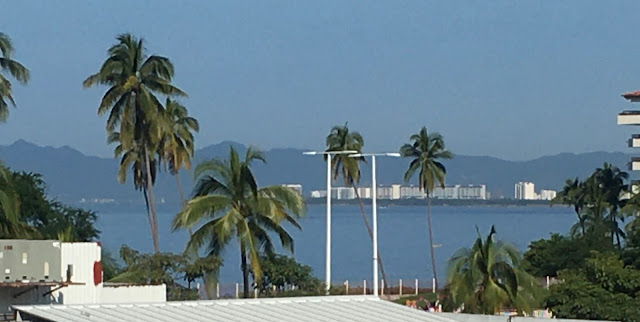 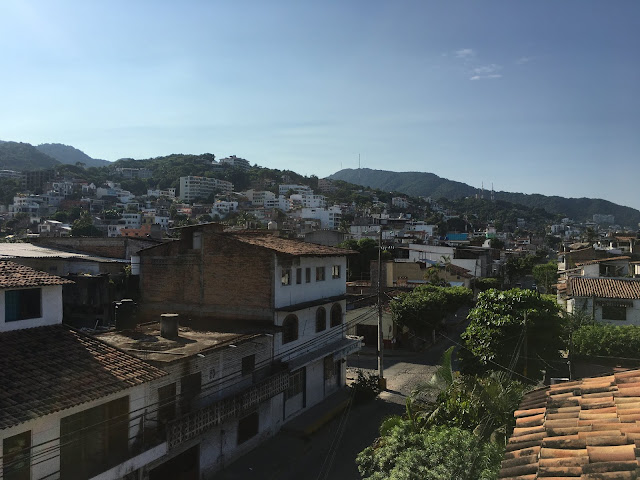 complete with a well stocked kitchen- 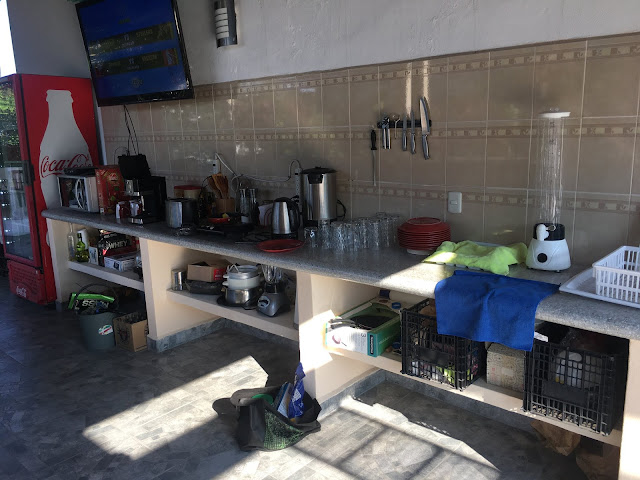 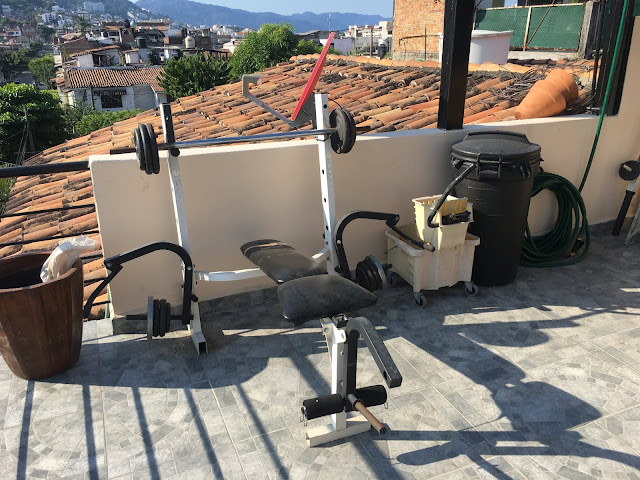 and great bathrooms!  The air conditioning is on from 8 pm to 8 am.  Carlos is a man of many talents- He spent 6 years working in concrete in Toronto before coming home to Guadalajara to look after his ill father.  He’s been to Johannesburg, South Africa hunting antelope and warthog which he has stuffed in his home and where he also has numerous mounted heads on the walls.  He’s currently getting his money from a barium min somewhere in Mexico.

Today, after a leisurely start, I wandered to the cemetery to see the celebration  The outside walls are decorated- 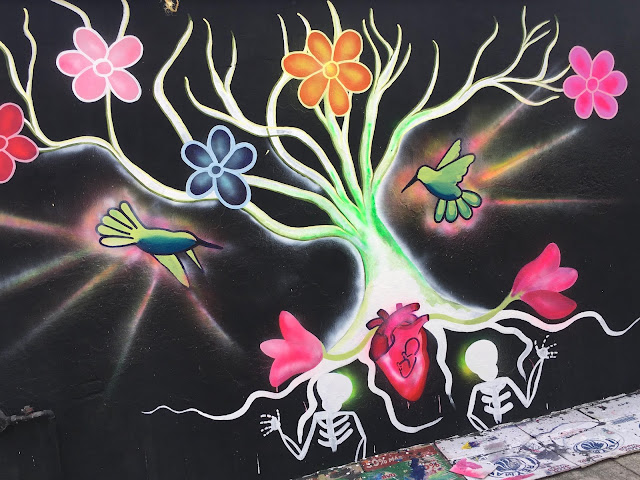 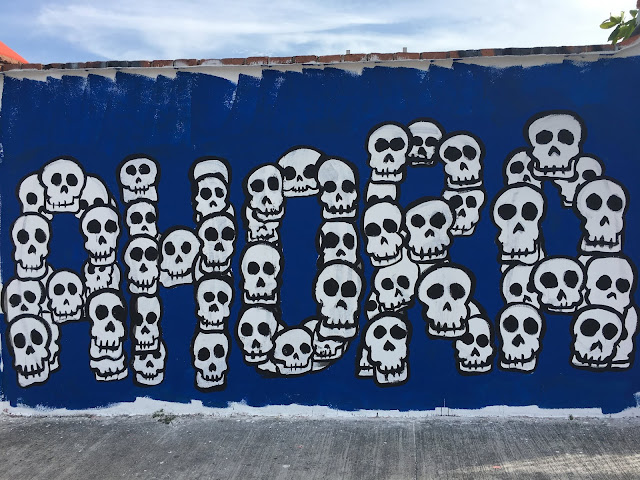 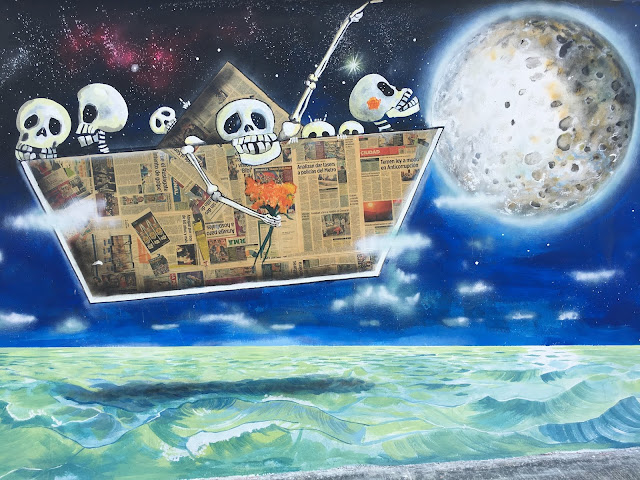 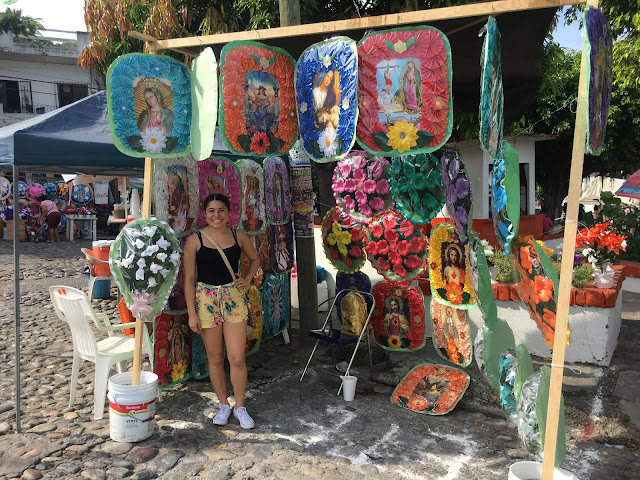 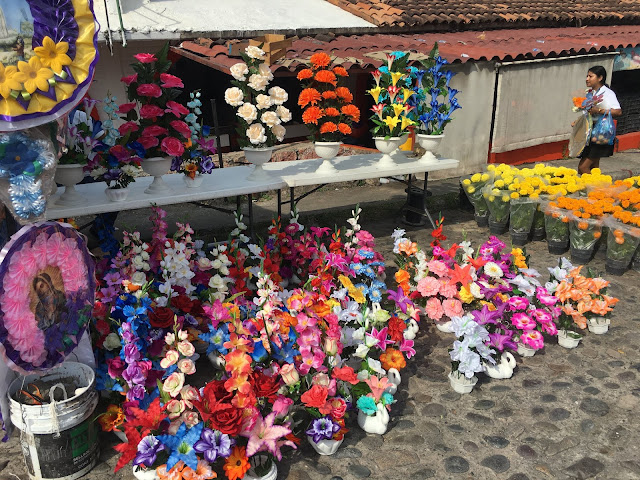 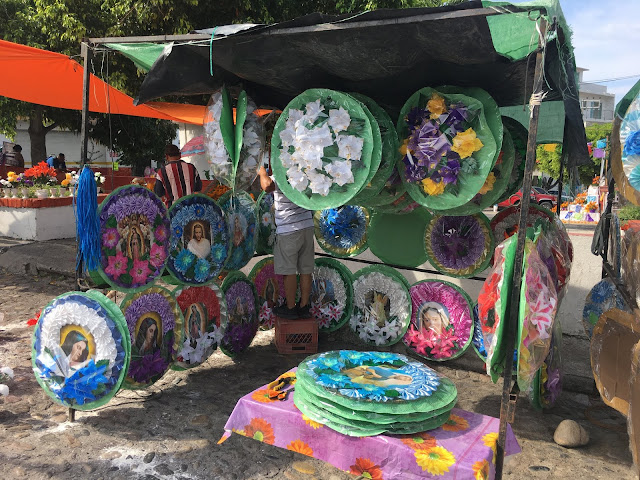 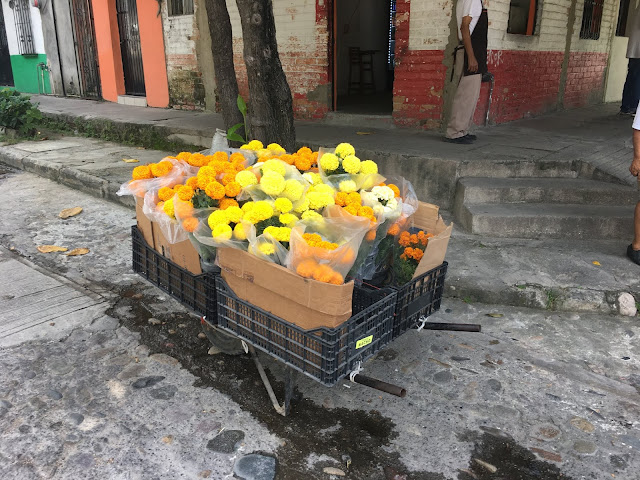 Only a few graves were decorated, apparently the big day is tomorrow- 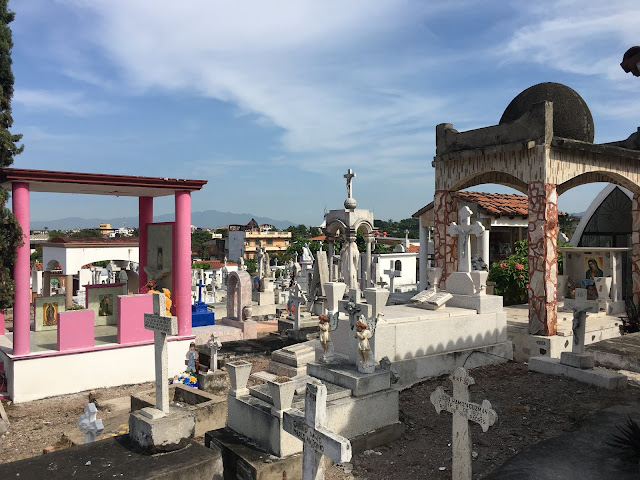 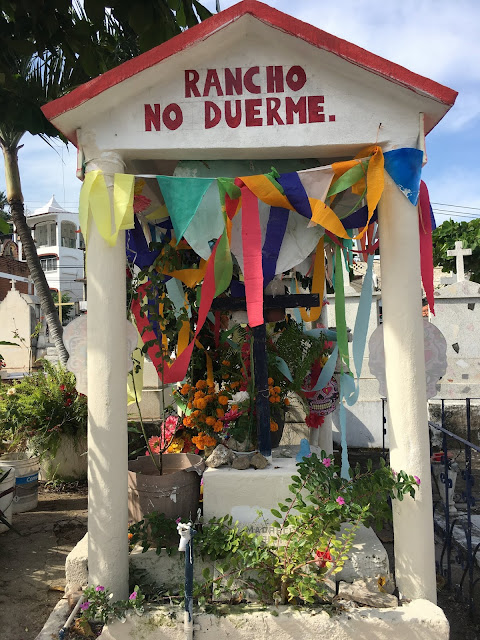 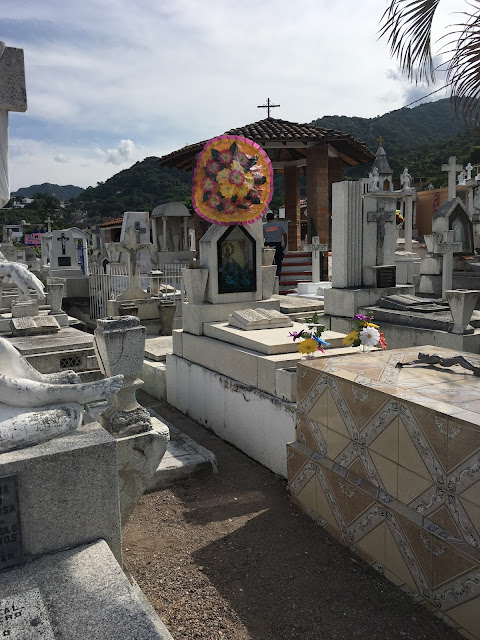 El pan de Muerto is also for sale.   It’s like our Easter bread: yellow from eggs and nice and sweet- 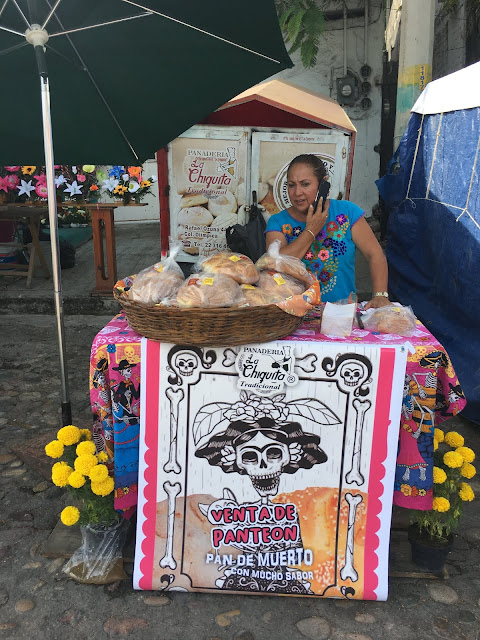 Leaving the cemetery, i headed down another well decorated street- 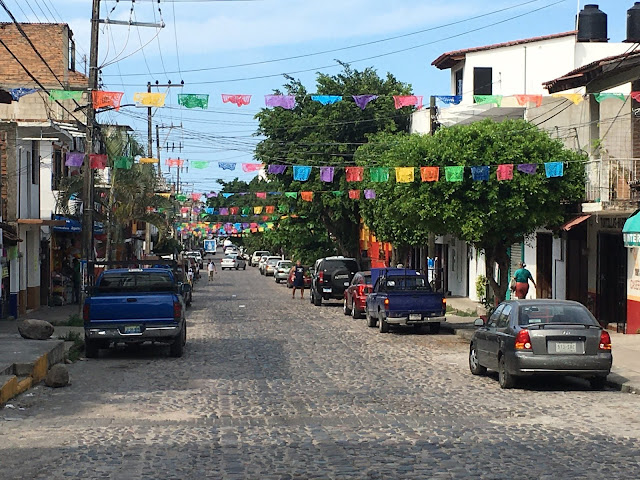 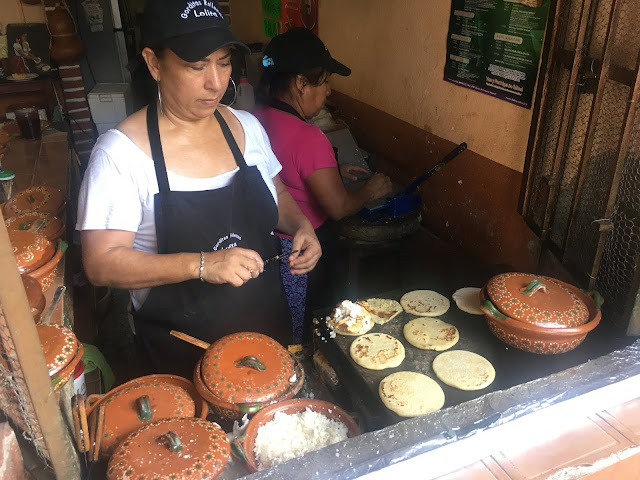 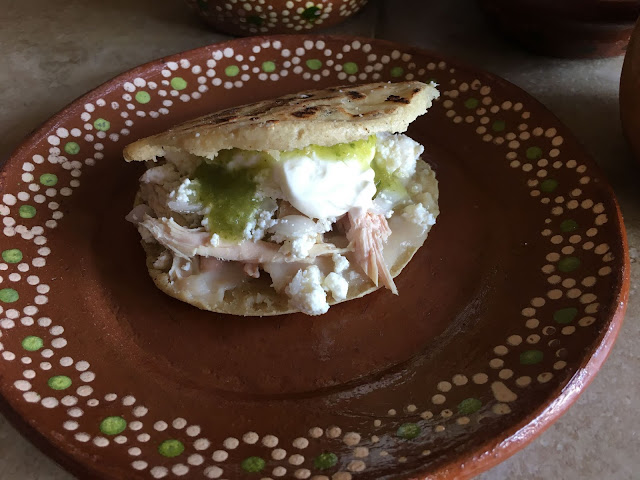 It’s a thicker tortilla stuffed with pollo, queso, creme fraiche and salsa.  So good! Gordo means fat and that’s what I’m going to be, actually fatter, if I keep eating at all these little hole in the walls! 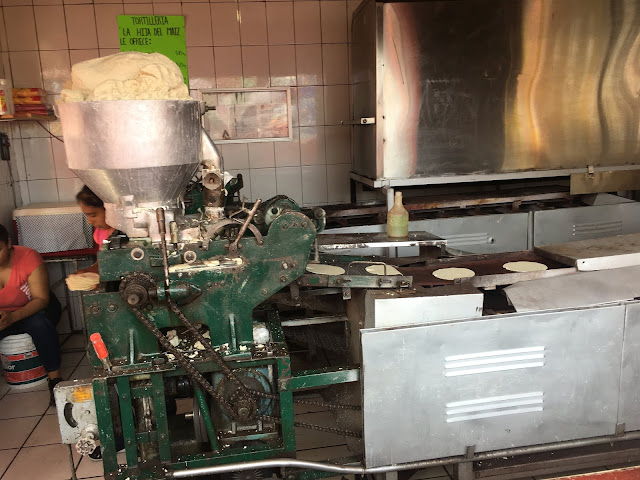 This street was decorated too- 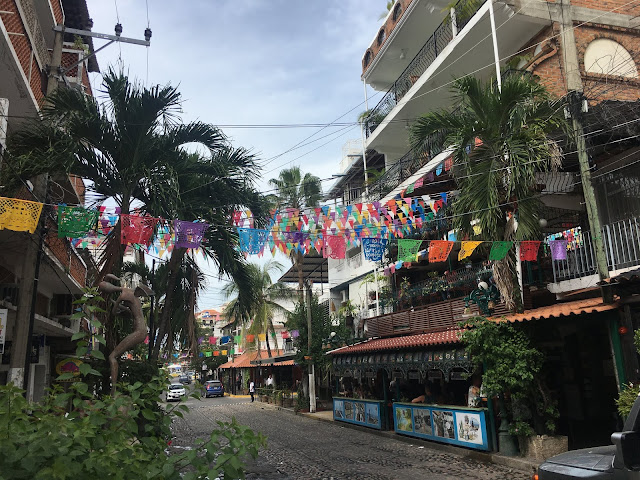 The Malecon had more Catrinas, including one all about inclusion- 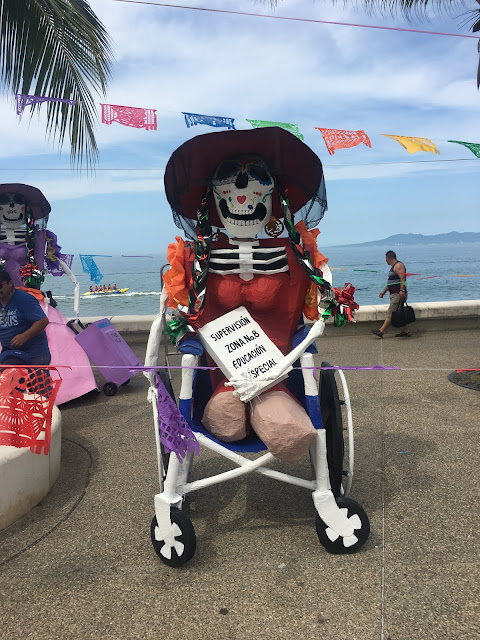 I spent a couple hours enjoying the view, oh ya and Mojitos- 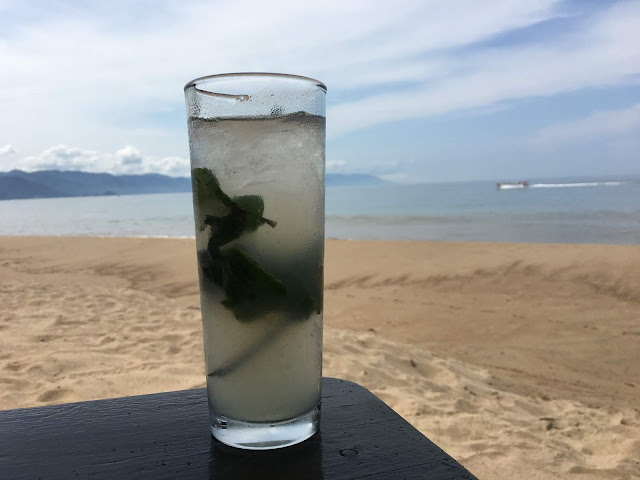 Further along, I came to the Playa los Muertos- 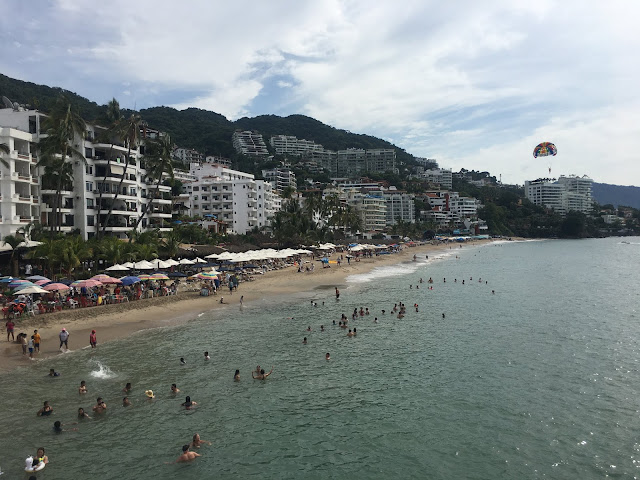 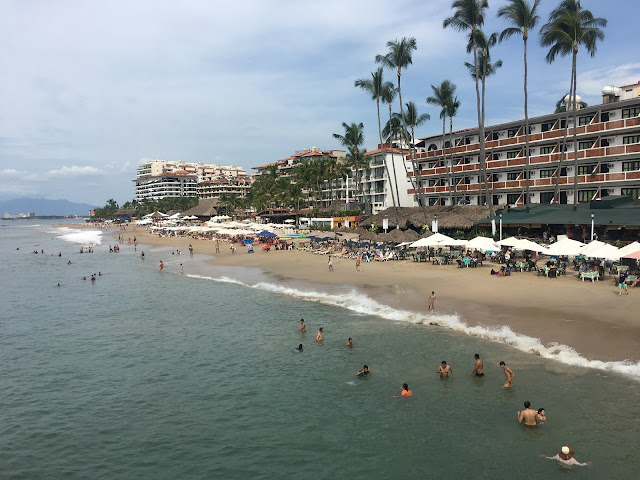 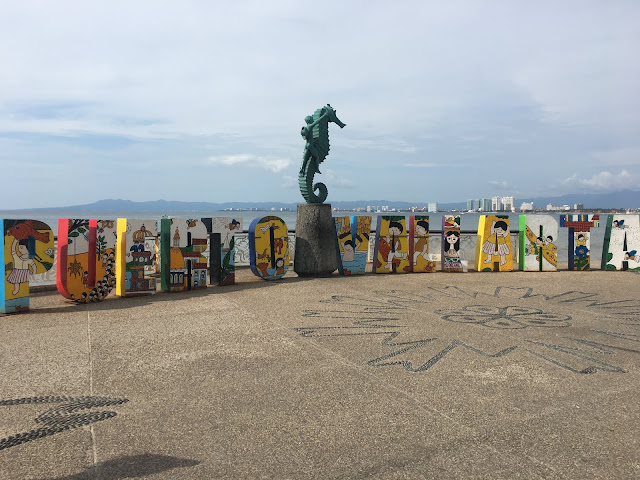 On my way home I stopped for supper at a street stall.  One taco has chorizo, the other cabeza - meat from the head of the cow.  I remember one time I was in Phoenix in a grocery store.  I heard a bunch of screaming so followed the noise to find women filling their shopping carts with Saran wrapped cows heads.  They said that for the $20 cost, they could feed their family for a week.  The meat is very tender and when cooked with Mexican spices, it’s awesome.  They both tasted great and only cost 41 cents each.  Besides the meat, there are onions, cilantro, queso and salsa- 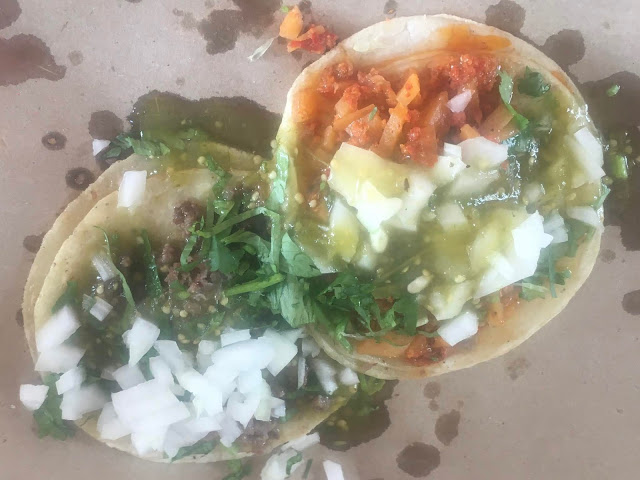 Once back at the hostel, I learned we were all jumping in Carlos’s Ford F-250 and going up the mountain to see the sunset- 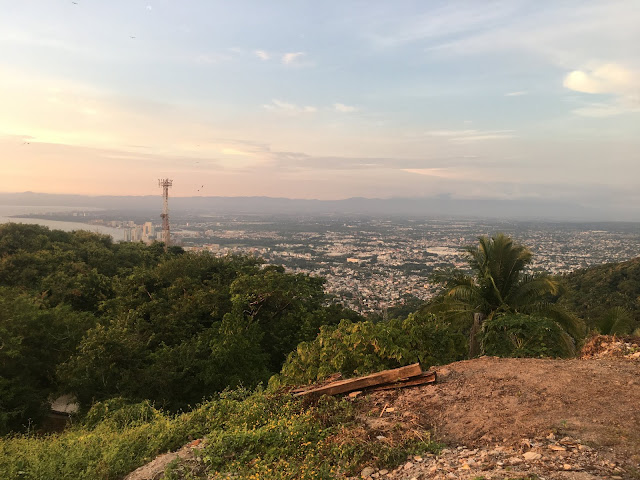 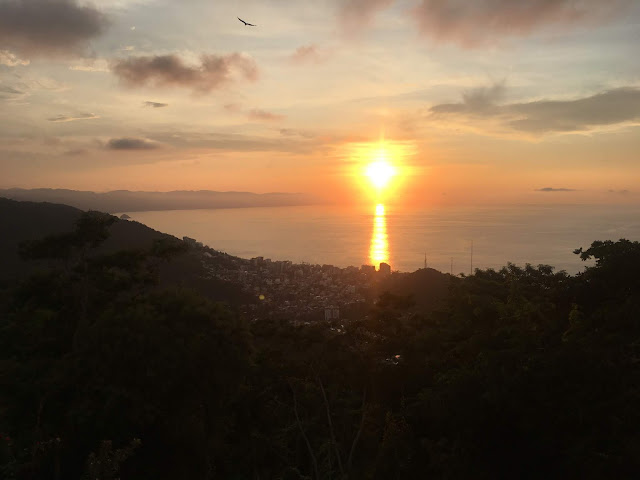 There’s a restaurant at the top but each person has to spend 100 pesos ($6.88) to take pictures.  Carlos got really angry with the waiter and we stomped back to our truck.  Meanwhile, Pedro, a German with us, tried to take some pictures but the waiter stepped in front of him to block his view. It was quite weird especially considering there were only 4 people in the entire restaurant and we might have spent some money there if they’d been politer about it.  Oh well, I got my pictures before all of this started.

Back at the hostel, I made contact with Alan, a friend of friends at home. He’s from Yorkton and spends 6 months here.  Tomorrow he’s got a Scrabble game lined up at 2 while they watch the Rider game in a local bar so that’s where I’ll be too. Go Riders!