While at Gizo, I dove 3 days with divegizo.com for a total of 6 dives.  These include Grand Central Station, the Toa Maru #2 Wreck, Secret Spot, Hellcat, Gap, Manta and One Tree.
Thanks to John Penfold who took these great pictures.  John is also a sailmaker in Sydney, so if you are ever in the market for a new sail or repairs, check him out at JP Sails.
Here I am-

Grand Central Station is where oceanic currents merge with Gizo Islands, so there are lots of fish because there is big current. The coral was  beautiful and there were thousands of fish.  This site has the second highest fish count in the world.  There are over 270 different species that you can see in just one dive!

The Gap is a drift dive.  We went into Gizo lagoon and saw barracuda, reef sharks and tons of schools of fish.  There were huge sea fans

and gorgonians.  I saw a barracuda, a green pipe fish about a meter long, an ugly, ugly crocodile fish,

a Spanish dancer, and a black tipped shark.  At One Tree Island I saw hard and soft corals, huge sea fans, a school of baraccuda about a meter long each!, 2 one meter long grey reef sharks, and a huge parrot fish!

At Secret Spot, I saw a small Manta Ray, an Eagle ray, about a 10 inch pipe fish, and an open green anemone with clown fish enjoying its interior.  This is also where my regulator, stage 1 hose broke at about 10 meters! All of a sudden I heard a loud bubbling noise and could see bubbles behind me. I took a normal breath, then could only get a half breath, then nothing. Luckily I was right beside the dive master and he gave me his secondary mouth piece! We were at the end of our dive, so just waited until I calmed down a bit!!! then we ascended to do our 3 minute stop at 5 meters! The couple I was diving with have over 200 dives each and nothing like that has ever happened to them! It was just a freak thing! I was pretty nervous afterwards, but went in again to see the Hellcat.

It is off the Island of Quomu and very cool because it is in only 10 meters of water and completely intact! It was only discovered in 1986. Unfortunately pilot Richard Moore passed away before that in 1978.

Apparently, the Hellcat left Munda Airfield as an escorting fighter. A Corsair F4U ( also an American plane) shot Moore's plane in the engine, high on the port side. It started smoking and leaking oil so Moore decided to return to Munda. Soon, the engine cut out and landed safely in shallow water, about 100 feet from a reef. Right away, two native canoes showed up and took Moore and his wingman to safety.
The ammunition magazine covers are open. Because the engine cover is missing, you can see the oil tank. There are 2 bullet holes - one behind the cockpit and the other in the tail. (Thanks to the divegizo.com for this information).

The Toa Maru #2 Wreck is one of the most popular diveable WWII shipwrecks in the South Pacific.  It is 450 feet long and lying on its starboard side.

The Americans attacked it so it ran aground.  You can see saki bottles,

a telephone and medical supplies. 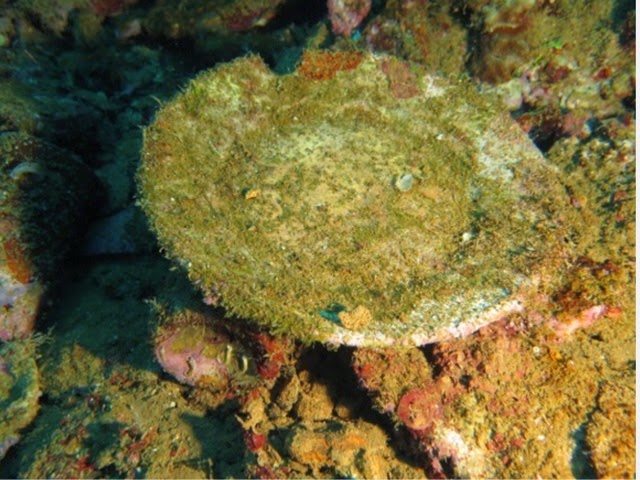 There are a lot of corals growing on the top and you can see the hole that caused the demise of the ship!
At Manta, I saw a turtle and numerous blue starfish, an Eagle Manta, hard dark green coral and I found a writing slate.    The current was pretty strong here and I flew into the wall a couple of times.  I hate doing that because you cause damage to the coral.
Lunch all three days was on deserted islands.  Today we had barbecued snapper, grouper and Trevally-

Then they wrapped the fish up, put it in the fire and covered it with leaves-

It was delicious!
There are lots of islands along the way.  Some seem deserted and others have wood and grass huts-

These hermit crabs are pretty cool.  Here are 4 dragging shells-