What a sleep!  No one moved in our room all night! I woke up on my own at 7!  That’s so rare as often someone starts rattling around sometimes as early as 5:30.  Then, breakfast included cereal and yogurt so I didn’t have to eat bread!  It was a win win kind of morning.

My intention for the day was the same as yesterday -  it’s the journey, not the destination!  I’m trying! 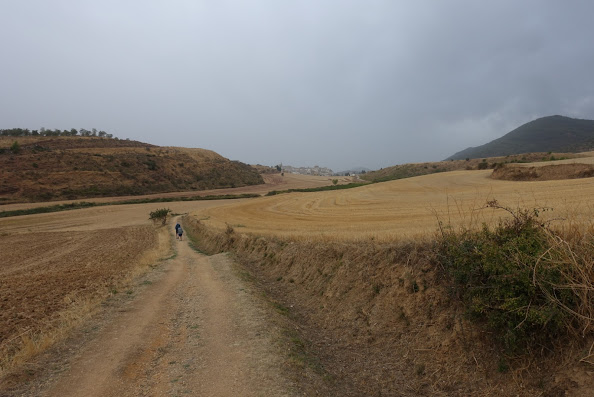 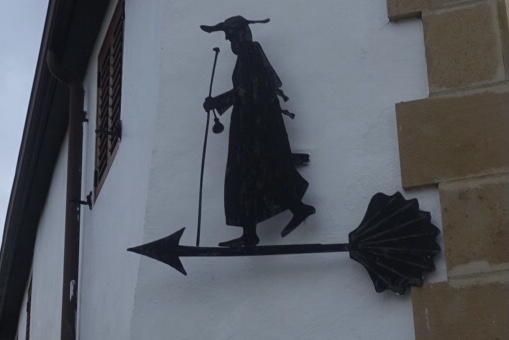 I took an alternate route which according to John Brierly’s camino bible looked shorter.  I walked along a narrow cow path up and down and through some beautiful spots but the couple in red ponchos who were so far behind me as to be out of sight were ahead of me when I got back to the real route.  Note to self…. 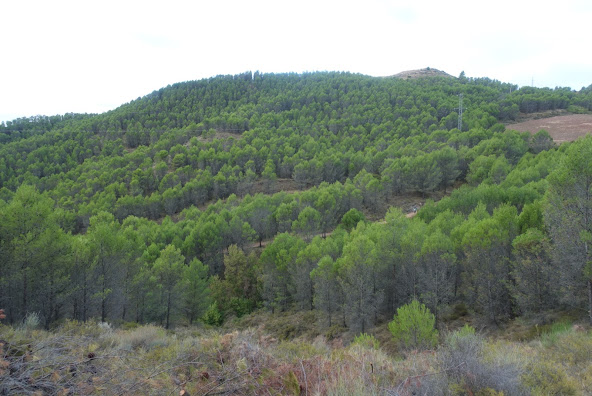 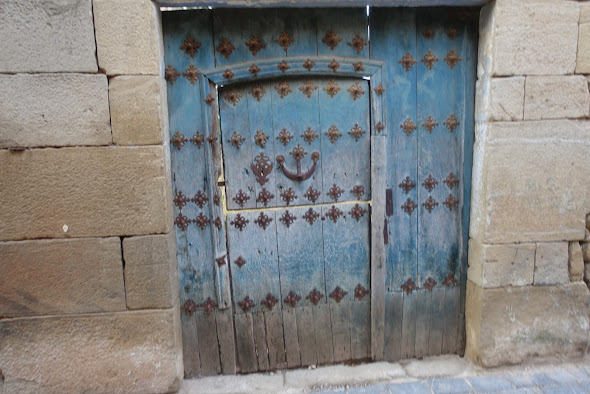 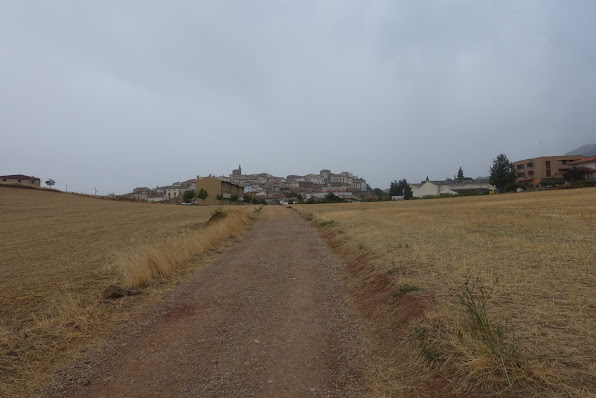 One of the few moments when the sun came out- 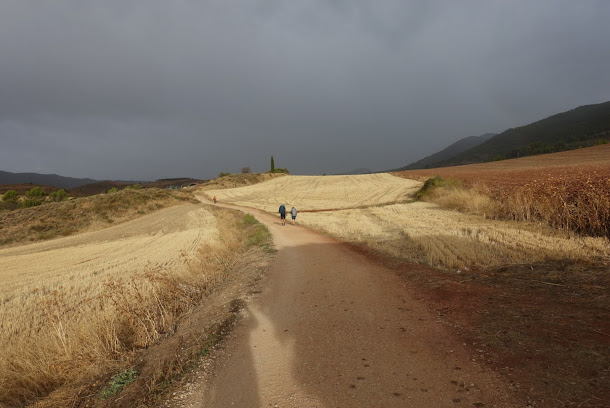 Remnants of a Roman road- 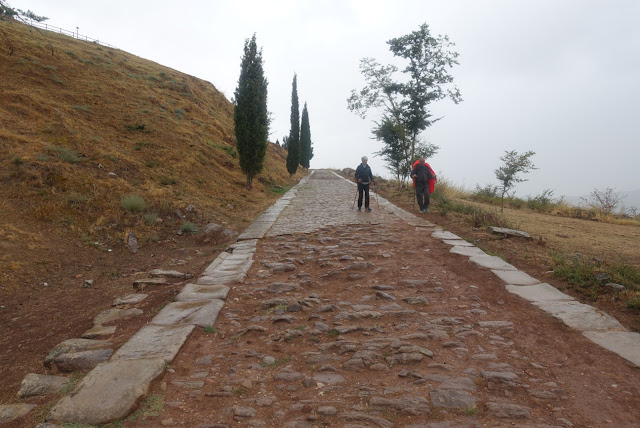 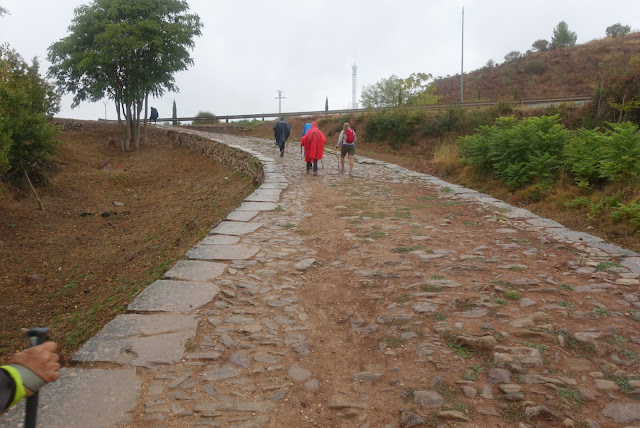 Unfortunately a man from The Netherlands fell on slippery cobblestones - (it was raining off and on most of the walk) and broke his ankle and scraped his face pretty badly.  The ambulance came and took him to Pamplona.  That’s one of my biggest fears.  I’m a stumbler so I am super careful descending the slopes,  making sure I use my poles.  I keep my head down looking where I’m going all the time. I have to remind myself to look up every now and then!

Lunch was a delicious tortilla! They also served gluhwein but I didn’t try it- 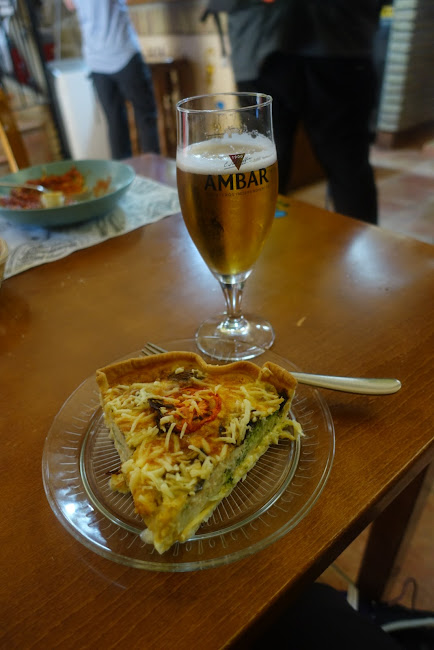 Continuing on - there are inukshuks everywhere- 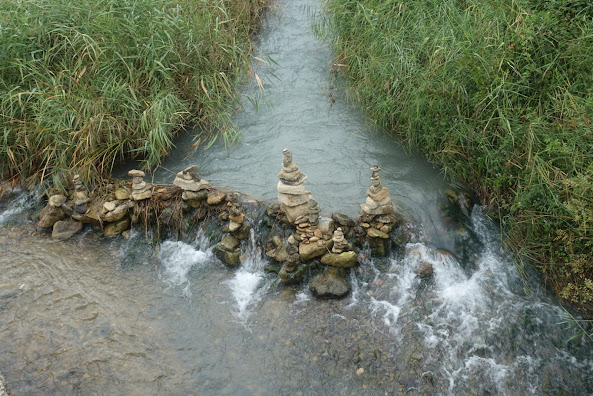 I had to stop a couple of times to put my rain gear on and to add blister bandages.  My little toe on my left foot hurts and so does my right knee.  Hopefully tomorrow both are a little better.  I’ve still got a long way to go! 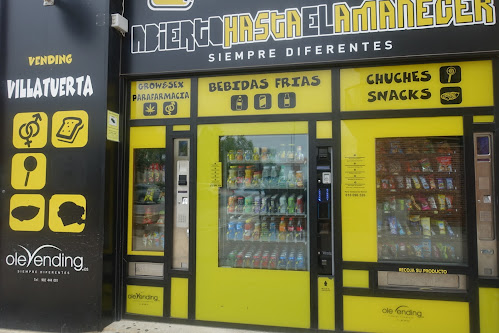 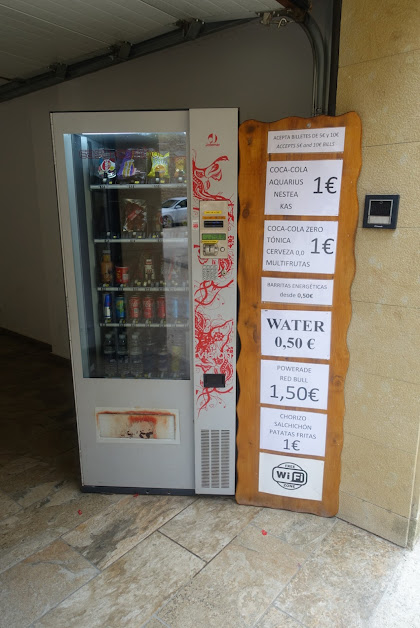 Navarre is well known for its white asparagus- 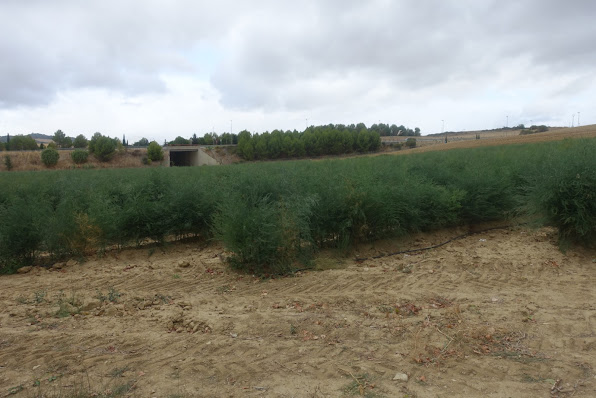 Today didn’t seem as hard as yesterday and finally I arrived in Estella. The Church of the Holy Sepulchre’s Gothic portico was built in 1340.  Saint James and a bishop are on the bottom and the apostles are above- 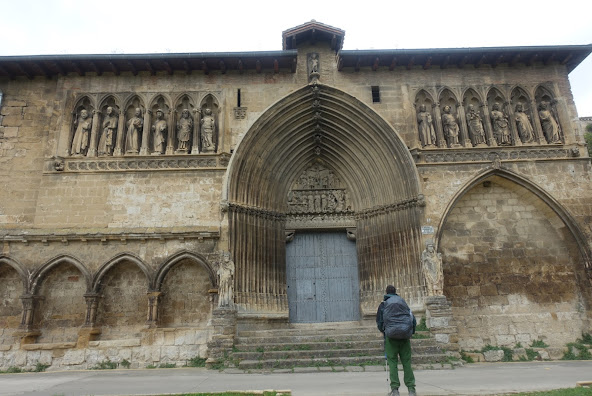 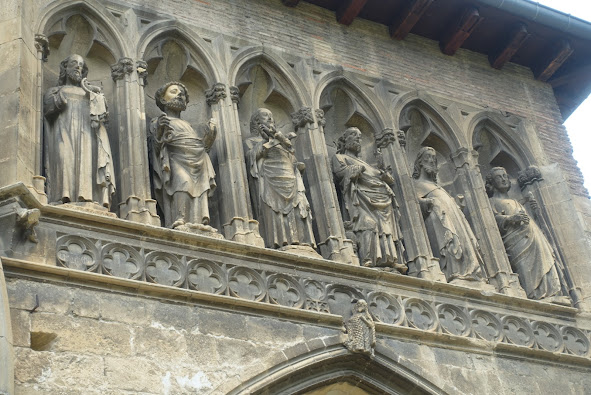 The tympanum is divided into three horizontal sections.  On the top is the crucifixon with Mary and Saint John standing out as well as soldiers and thieves gathered around.  In the middle are the three Marys who visited Jesus’ tomb, his descent into hell and then his apparition in front of Mary Magdalene.  The bottom shows the Last Supper and it’s interesting to note the angle of the table which allows us to see the tableware.  Saint John is leaning on Jesus- 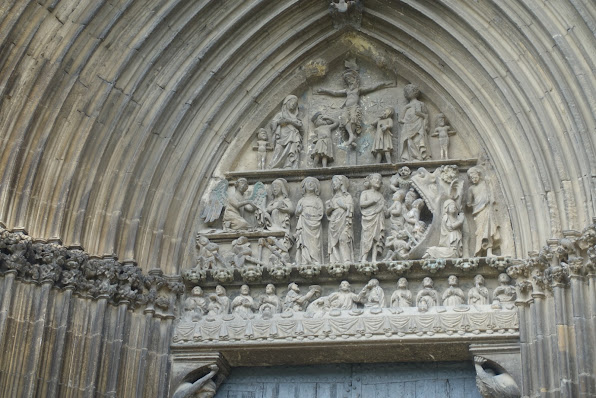 The Prison Bridge was built in The Middle Ages to connect the burgs on either side of the river.  It’s called the Prison Bridge because at one time the city’s prison was next to it.  In 1873 it was blown up during a war and this edition was built in the 1970s (how disappointing) based on the original plans- 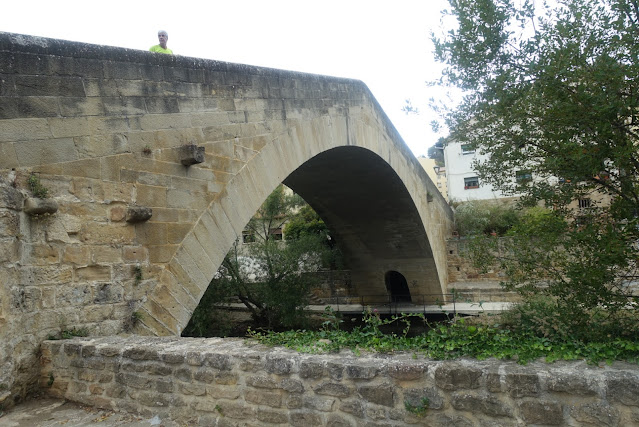 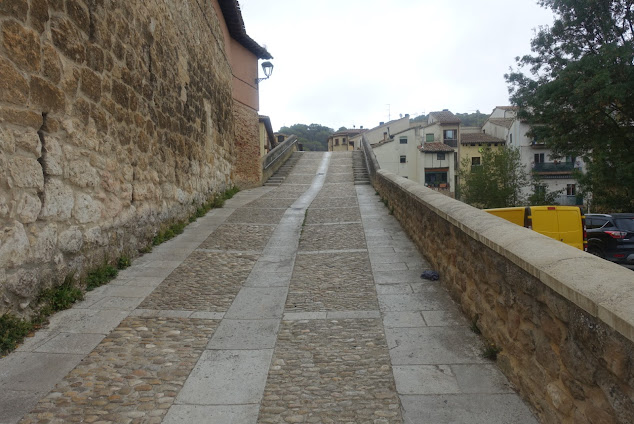 I am in the municipal hostel which was a stupid idea.  It cost 8 Euro ($10.55) but the showers are luke warm and the top bunk is so close to the bottom one that I can’t sit up on my bed.  The problem In choosing a hostel is that when you get to your destination you are usually really tired and you also want to get a bed. It’s not fun to search and search after a long day’s walking. I could make a reservation but I never know for sure how far I’m going to get. I will not do this again as I do need a little bit, well I don’t think I would call it luxury, but a little bit of better than this.  At least they provide blankets which is great for me as I only have a silk liner which is not warm and an airplane blanket.

Supper was a couple of tapas. The smaller one is a potato and cheese croquette. It’s like a Mexifry but very well blended and smooth. The second one is a fish pâté on a slice of bread. It’s a regional speciality- 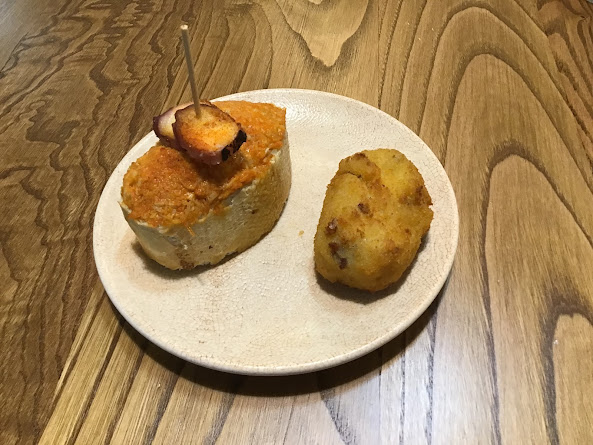 Pet peeve of the day-  people, probably women, who pee wherever and leave their toilet paper!  Come on!  Carry a small ziplock bag and carry it out with you.  Seeing discarded toilet paper along the way and behind bushes is disgusting!

Hoping my feet are better tomorrow!