My flight from Calgary to Paris was 8 1/2 hours long with an eight hour time change. I arrived at CDG (Charles de Gaulle) about 12:30 PM. I had a good seat on the plane and slept a lot; in fact the only time I was awake was when I was woke up to eat.

North Battleford made the cut – 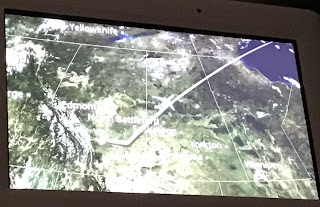 I don’t know the name of the plane I was on but the windows darkened automatically.  Even at 10:30 this morning it was still “dark” out and then all of a sudden it was daylight!  There were no shutters, it just happened automatically. The food was pretty good and I sat beside a couple from Paris who spent the last month touring Alberta, British Columbia and some American states.

The CDG Airport is very comfortable. I have spent the afternoon on a very wide and soft couch. I slept a lot so I’m hoping I won’t feel much jet lag.  We board in about an hour.