Time is flying by!  Only 7 more suppers and 8 more sleeps until I start my way home.  I am looking forward to going home - to see everyone and hug, kiss and play with Nico.  I'm hoping the weather will cooperate so I'm not wishing I was back here a few days after being home!
This past week, I went to the gym for seven sessions and had four days with three hours each of Spanish lessons.  I found a comedor that has consistent pollo asado so that's where I've been having lunch- 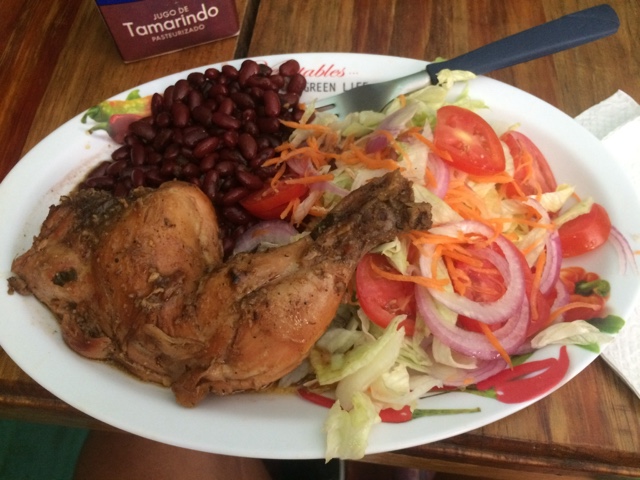 This full plate cost only $4.50.  That's a pretty good deal and it was delicious. As a bonus, I get to watch tv - always La Rosa de la Guadeloupe.
I also tried tamarind juice- 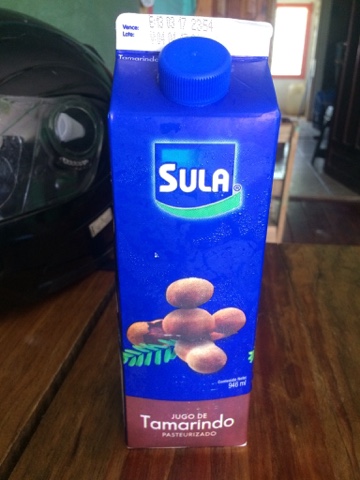 It was good but full of sugar so I won't be trying that again!  I've been drinking Fresca, quite a lot actually, but won't be doing that anymore either.  This afternoon I read the label and the second ingredient is sugar!  It's not sugar free like at home!  Here I thought I was doing so well!
My cooking this week has been chicken curry, lasagna, tacos and big salads.  With the heat- 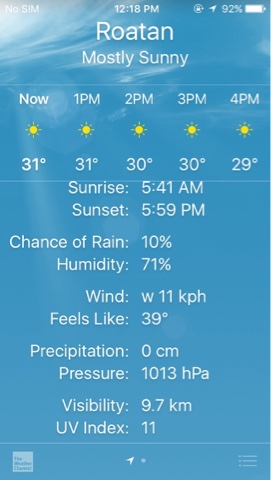 "Feels like 39", no one wants to eat too much.  Sweat pours down my face while I'm in the kitchen; you'd think I'd be getting skinny!
Mercedes or Olga Joy (I'm not sure what her name is - on her email it's Olga Joy and I've heard people call her that on the phone but I call her Mercedes) is my fourth Spanish teacher this trip - 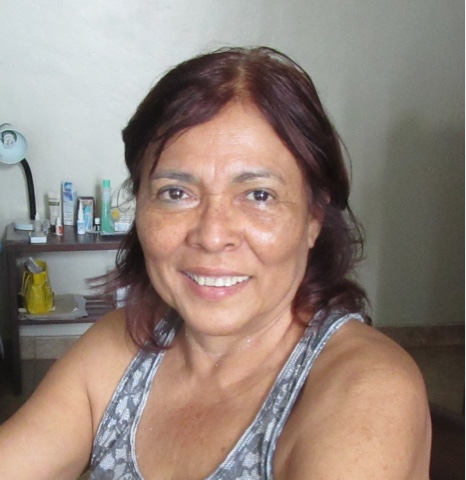 At yesterday's class, it was like a lightbulb came on for me.  She doesn't 'baby' me like my other teachers did.  She speaks the way she would to her friends - mumbling, slurring, dropping letters, using slang and talking two miles a minute.  I've found it quite difficult understanding and following so I often just nod my head, thinking I'm getting the gist, but yesterday I probably understood 95% of what she was saying and when I asked for clarification, when she enunciated the words, I knew what they were too.  Sheny in Antigua, whatshisname in SanPedro and Magdalena in Xela all babied me by speaking very slowly and using vocabulary that they knew I understood.  As a beginner, that was fine and I learned a lot, however, out in the real world, I couldn't understand a thing!  It's also been 'time' for me to move on language wise and there is no way my other teachers could have spoken to me the way Mercedes does.  I'm just very excited and quite proud of how much I've learned and I still have a week to go!  The only difficulty is going to be maintaining it once I'm home.
This next week will be more of the same: gym, Spanish lessons and cooking.  I keep saying I'm going to go diving at least once more, but I'm really not interested and keep avoiding it.  I am going snorkeling tomorrow with Mercedes and Arlene - it's supposed to be excellent out in front of Lawson Rock so we'll see.
at March 31, 2017