We went for a scooter tour before breakfast. We needed gas so filled up and while in the convenience store, a man said hi.  He looked sort of familiar but I didn't think anything of it.  We were buying beer so we were taking awhile when all of a sudden he was there again, with another helmet for Carolyn.  When I picked up the bike, there were only 2 helmets left and hers was too big.  I don't know if he travels with extra helmets or went back to the shop.  Not sure, but that's pretty good service and she now has a good fitting helmet.
There are a few nice homes along quiet streets looking out to the ocean.  Lots have pools in front too but quite a few were vacant.  Just holiday homes I guess- 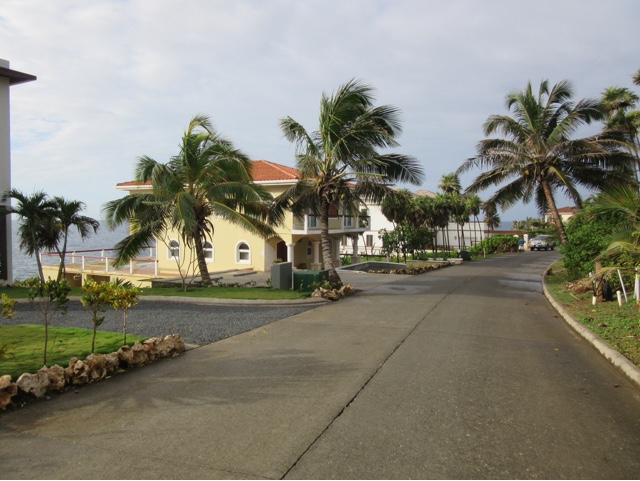 Cruise ships arrive every day, in fact over 13,000 people - gross! could invade on Wednesday!  Today only 2 boats were scheduled but we saw 3.  It makes for a busy island and inflated prices.  This is one we saw today- 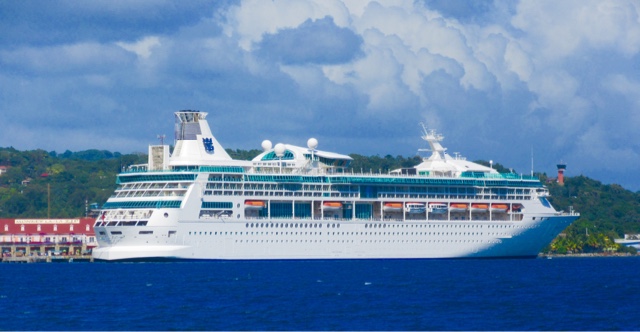 This time we not only found a sign, we found the actual sign company.  This one is going to West Bay which is where we're staying- 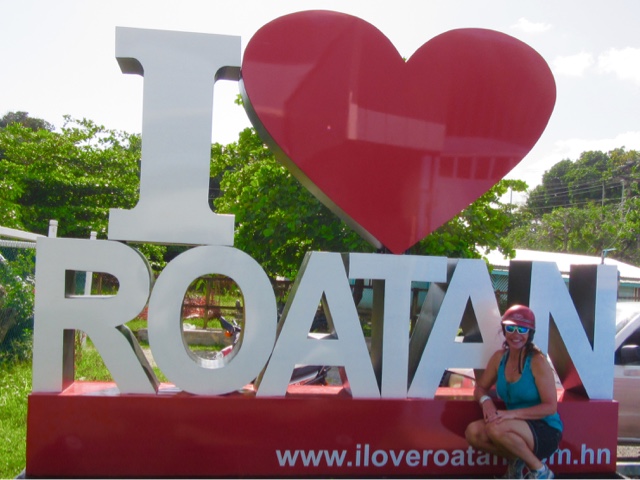 After diving, which was really good: we saw a monster green eel, shrimp, a pretty big grouper that hung out for awhile, as well as lots of smaller colorful life, we scootered part way across the island to Daniel Johnson's monkey and sloth sanctuary.  It took awhile to find it and somehow the man we asked at a gas station beat us there and a woman, Daniel's cousin???, who gave us further directions, phoned to let them know two women on a scooter were coming, so they stayed open for us.  How's that for small town?
There are only 8 species at the sanctuary but all pens are clean and spacious and the animals seem healthy and calm.  Two raccoons, who are not native to the island, were enjoying their day-

Rat type rabbits called Central American agoutis infest Roatan but at least they are good to eat:  apparently they taste better than chicken!! 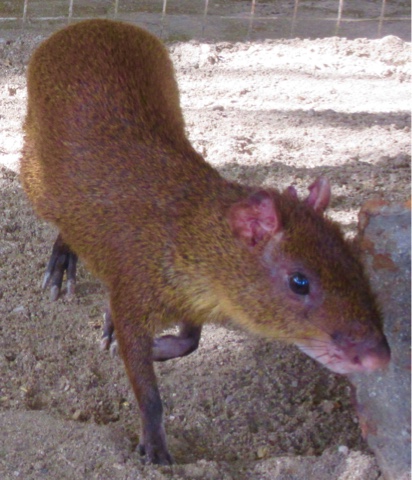 Carolyn let the creepy Capuchin monkies walk all over her- 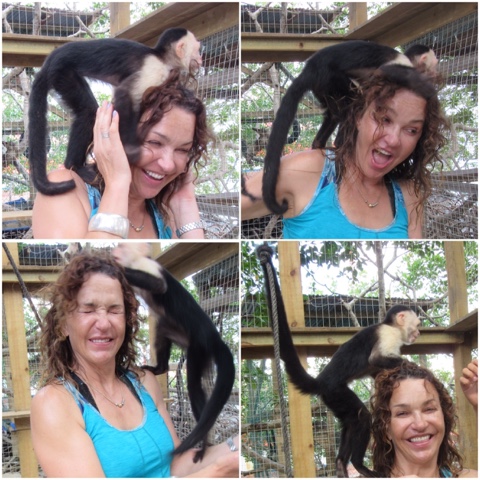 I wouldn't let them anywhere near me!  We weren't allowed in the spider monkey cage- 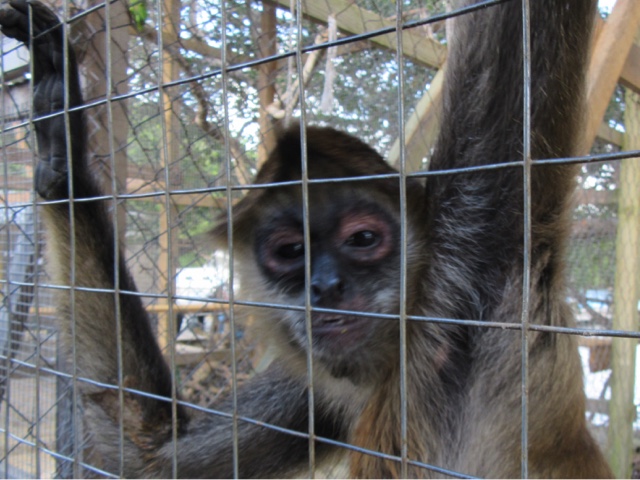 Their claws are nasty- 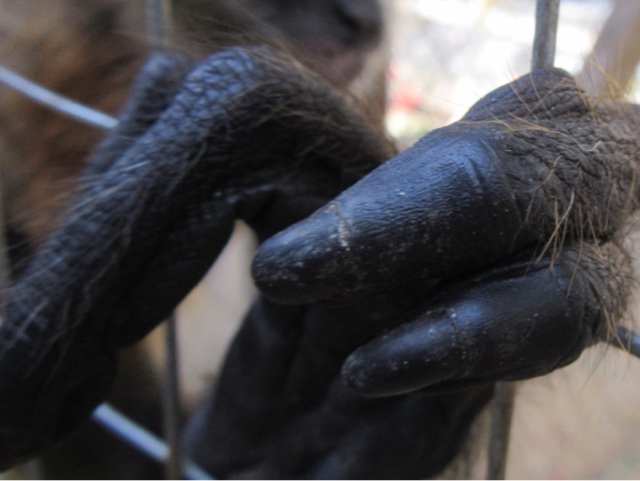 And "Tony" went nuts when a black guy came close to his pen.  Our guide said they don't like blacks for some reason.  I guess they're not color blind!
The Yellow Napped Parrot can be trained to talk, likes fruit and nibbles on sunflower seeds all day- 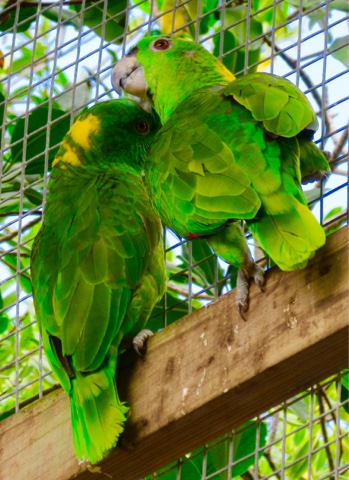 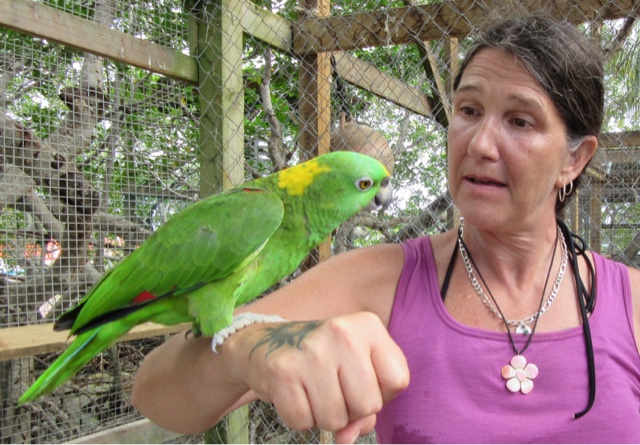 The Scarlet Macaw was supposed to land on my hand but opted for my head instead.  I kept thinking he was going to peck out my eyes- 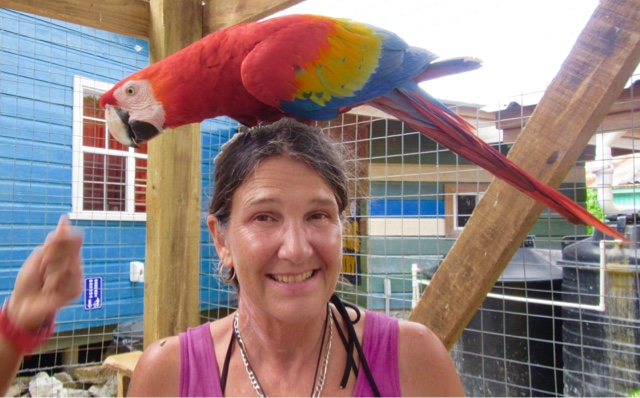 The Military, or Green Macaw did the same thing to Carolyn- 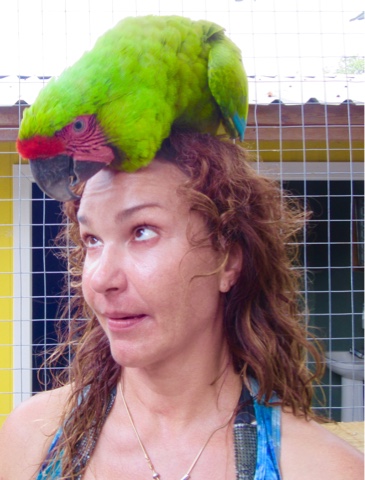 ''
The highlight for me was seeing a sloth.  They move very slowly so their only defence is camouflage- 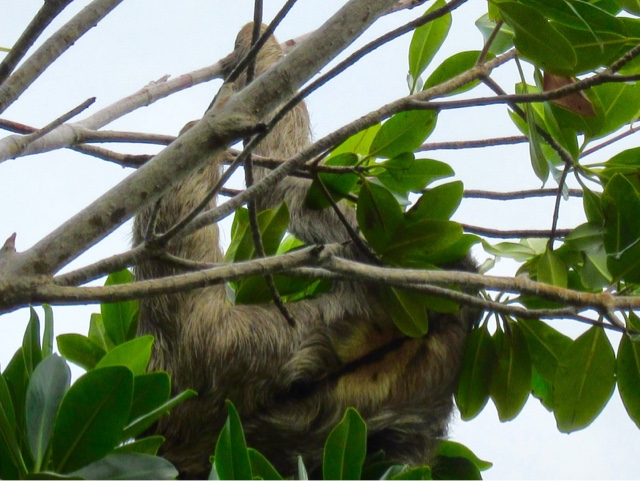 They have this weird stripe down their back.  At first I thought he had had some kind of back surgery- 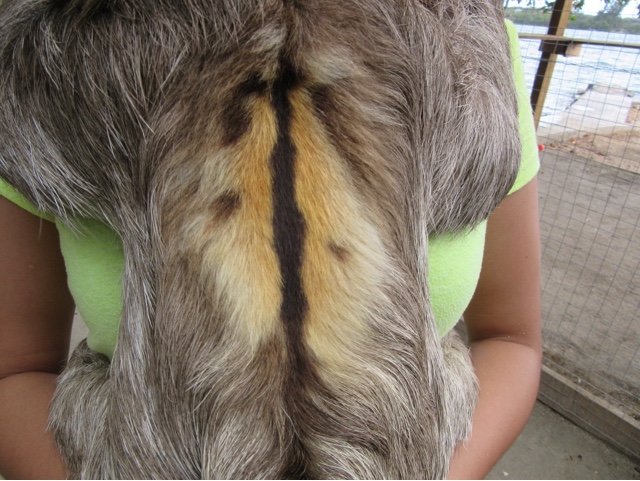 Their claws are very long and they use them for digging- 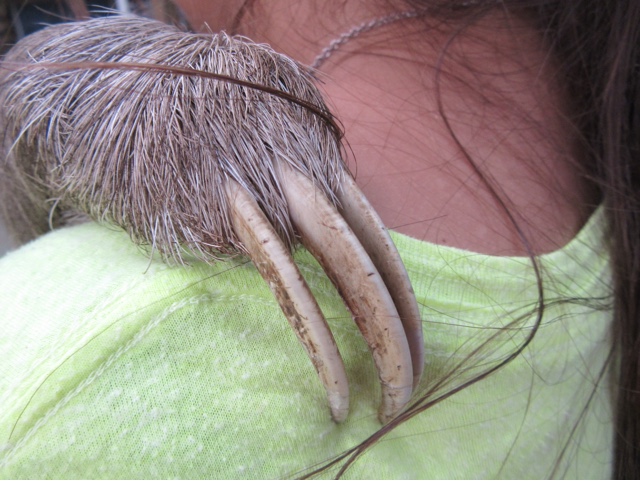 They have a perma grin.  I guess they've figured out that living in this sanctuary on this lovely island, getting plenty of food, water and hugs all day is the life- 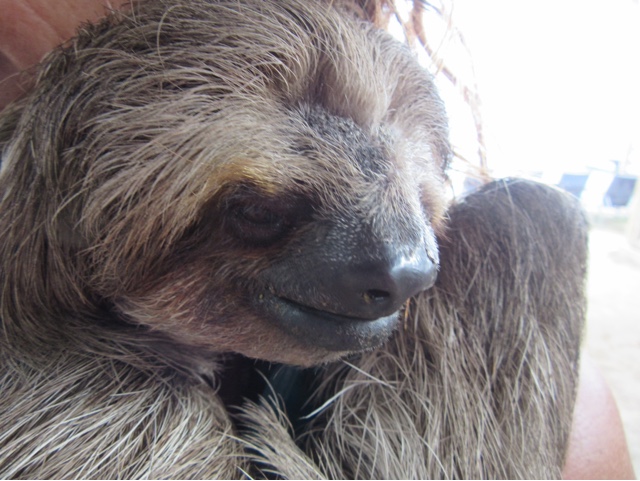 Two people are required to pass a sloth to a third person.  Their arms are held up and the new cuddler slides in underneath so the sloth can put his hands on your shoulders.  You can pet it everywhere except it's head- 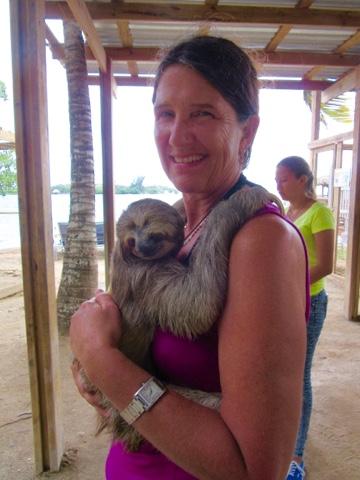 They are cute, kind of- 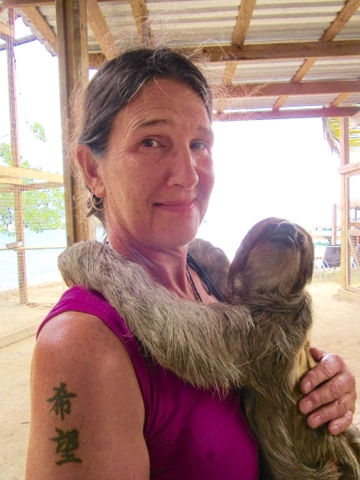 The scooter ride back home was faster and uneventful.  The sky was grey and it had rained in some spots but we made it home dry and safely.  And, wouldn't you know it - Happy Hour - again!
The sun was setting as we sat on the deck guzzling Monkey Lalas! 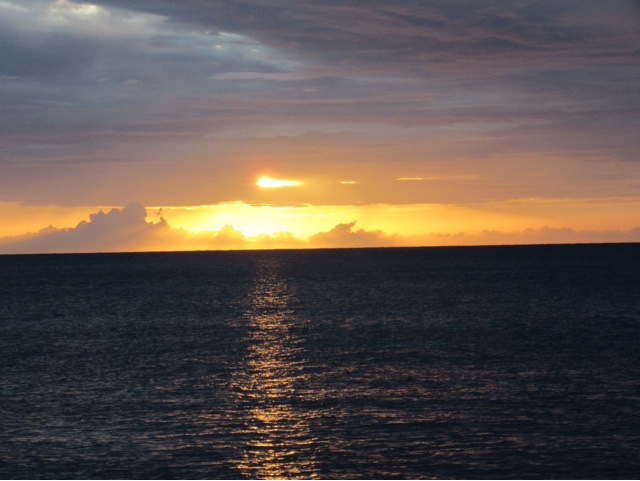