We are so lucky travelling with Madventure.  We have a fridge!  many charging apparatuses!  free weights!  a punching bag!  excellent and plentiful food!  Will has done a great job of putting a fantastic overland company together.  Thanks a lot!

We're in Budapest, Hungary.  Budapest is prononced Buda Pesht.  The west side of the Danube is the city of Buda and it is hilly.  The east side is flat and called Pesht.  The Austrians and Turks ruled the country forever and the borders have changed often too.  Today, Budapest has public baths and coffee, thanks to the Turks and beautiful architecture, thanks to the Austrians.

Hungary lost WW1 and were allies with the Germans in WW2 but controlled by the Russians.  They suffered through communism for 45 years.  In 1956, they revolted against the Soviets.  They lost but things changed to "Happy" Communism.  During Stalin's time, the people could not worship, but during Happy Communism, they could.   The original communist motto was " If you're not with us, you're against us."  During Happy communism it changed to "If you're not against us, you're with us."  Believe it or not, that simple word change gave the Hungarian people a lot more freedom.  Financially, Russia was very involved, but that ended in 1979 when Russia went to war in Afghanistan, taking their money with them.  Communism finally ended in 1989 because maintaining it was too expensive.

The first democratic elections were in 1990.  At this time, annual inflation was 40%.   Today, things are better, but there is a lot of corruption. 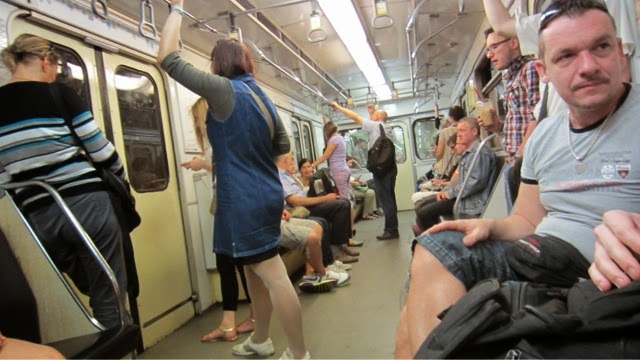 Today I went on two 3 hour walking tours with a company called Free Walking Tours.  The first was of the sights of the city, the second was a communism tour.   Both were excellent!  Here is what I saw!

Matthias Church was built between 1874- 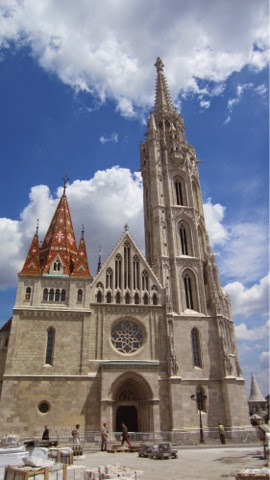 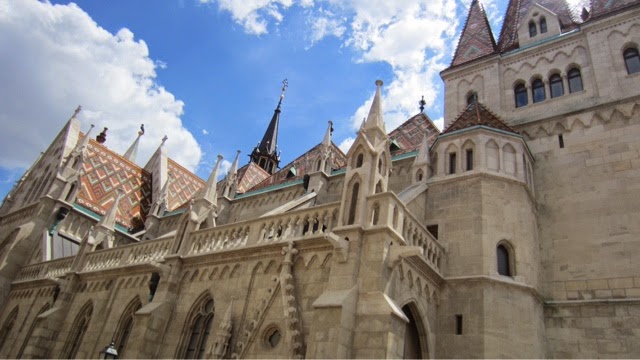 Fishermen's Bastion-  It's found near Matthias Church and Saint Stephen is on the horse.  It was built between 1895 and 1902 in neo-Romanesque style- 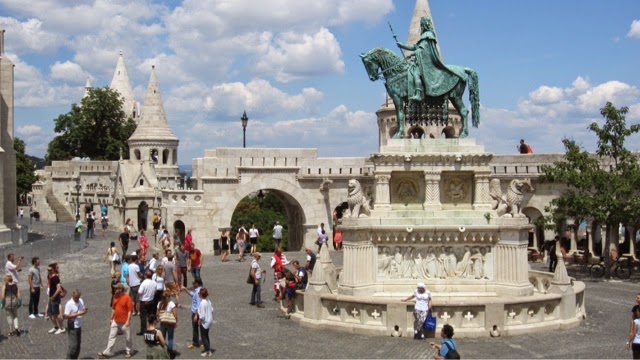 Holy Trinity Column, erected in 1713 is found next to Matthias Church.  The archangel Gabriel is on top- 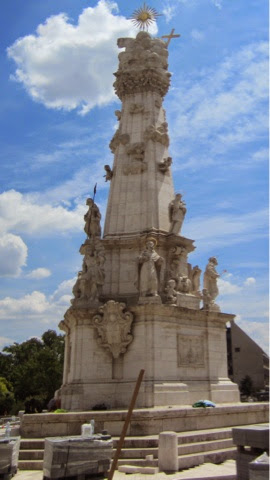 A popular drink is Bull's Blood, which is really just a dry, full bodied red wine from the Szekszard or Eger regions.  I tried Dreher Bak, a strong dark beer with 7.3% alcohol.  It was no Guinness!  Their schnapps include Palinka - known as national firewater, a fruit brandy from 37% to 55.5% alcohol.  It was rank.  Unicum is Hungarian Jag.  It tastes like not sweet cough syrup.

Here I am with a bottle of Bull's Blood- 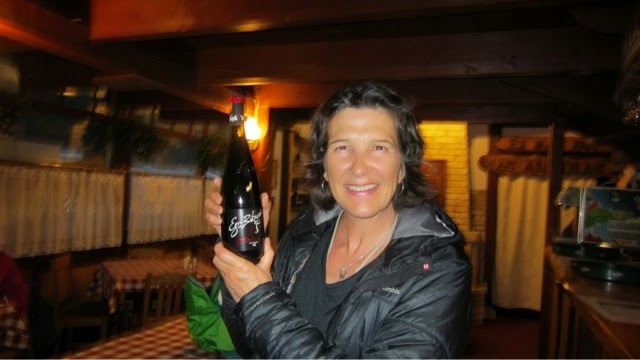 Gulyas is the staple soup, served with excellent bread- 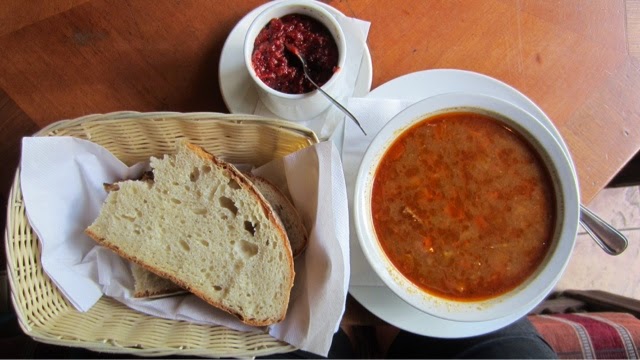 For dessert I had Turo Rudi: cream cheese covered with delicious chocolate.  Of course I couldn't pass up the Jim Beam! 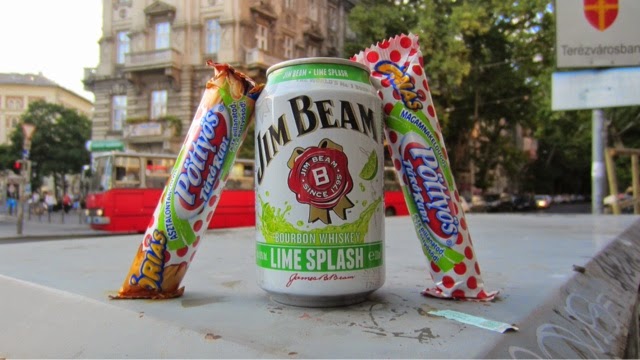 The Chain Bridge spans the Danube to connect the cities of Buda and Pest. It was completed in 1849 and is a suspension bridge.  It reminds me of the Brooklyn Bridge- 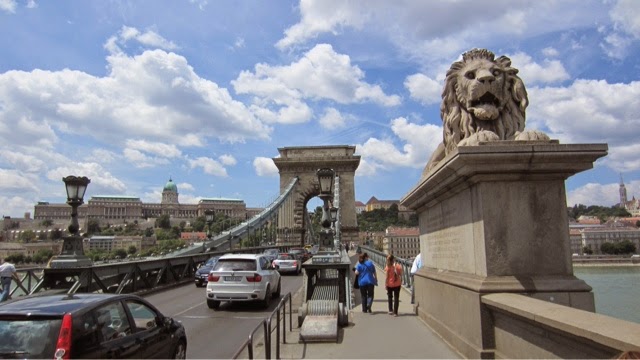 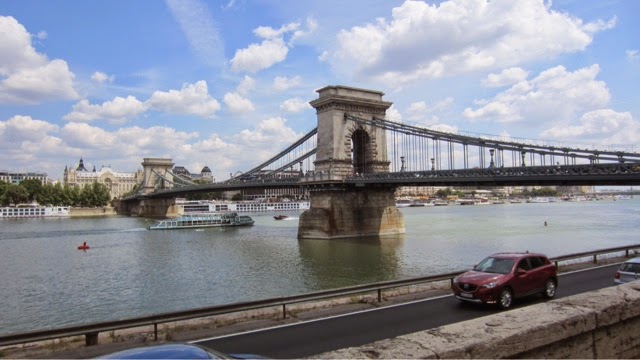 The Parliament building is an example of Neo-Gothic architecture with a bit of Renaissance and Baroque added just for fun.  It's the 3rd largest parliament building in the world with 691 rooms, 20 km of stairs, and is 391 feet high.  Only Brazil and London have larger parliaments.  It was inaugurated in 1896 on the 1000th anniversary of Hungary- 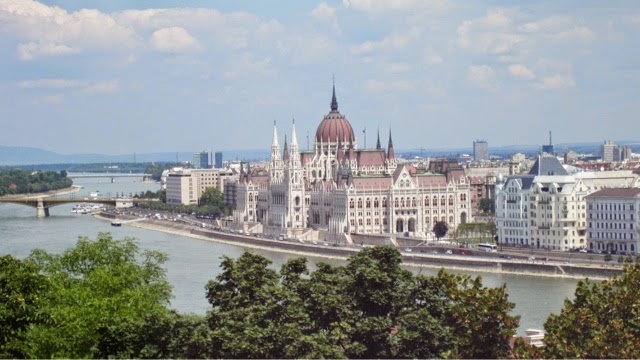 This is the first sculpture put up after the end of communism.  It is a young girl and if one rubs her legs, you'll have good luck- 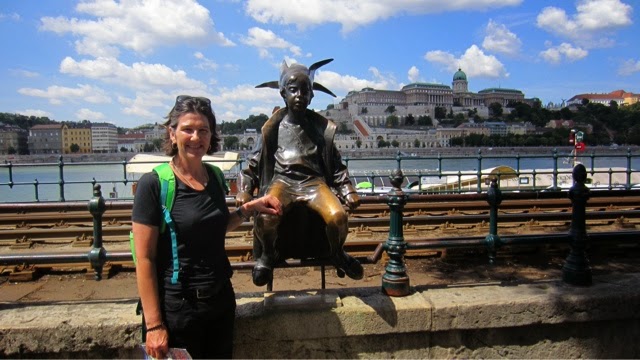 This is a statue of the former police.  Notice the large belly - Hungarians love fried food!  If you rub his belly, you'll eat well while here! 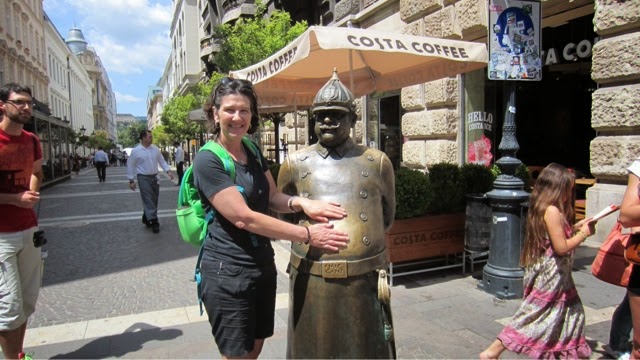 This is the Royal Palace.  The Austrian king never lived here and the building was added on to often.  It is found on the Buda side and today contains museums and the National Library- 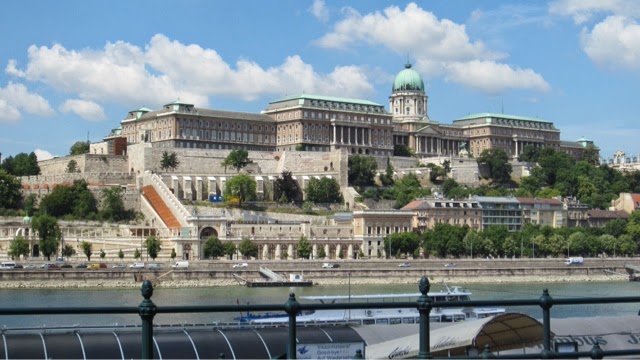 Saint Stephen was the first King of Hungary.  He Christianized the people.  This is St. Stephen's Basilica.  It holds 8500 people and took 50 years to build- 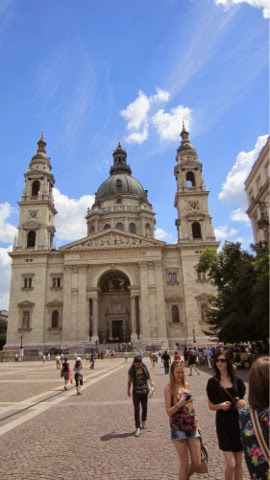 This is an apartment built by the communists.  Notice the air-conditionners on the outside of some of the apartments- 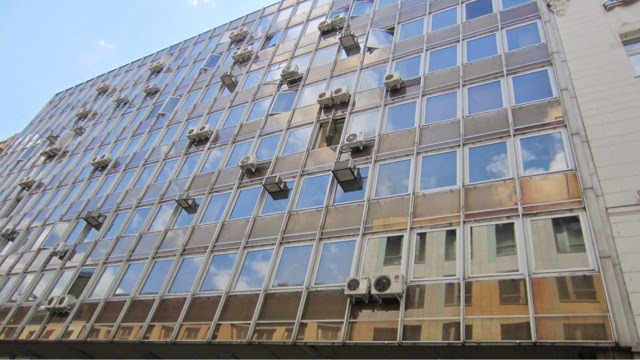 On the left is an example of an apartment building that was shot up during the Revolution in 1956.  To the bottom left of the photo you can see bullet holes.  The building on the right has been renovated- 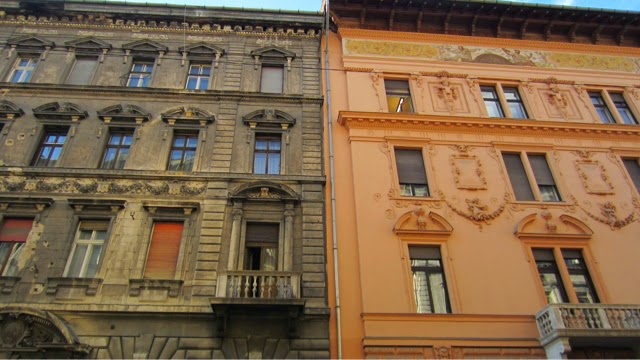 A controversial monument is being erected.  It shows an eagle, representing the Germans, swooping in on the Hungarian Jewish people.  Hungarians are upset because it wasn't the Germans who sent the Hungarian Jews to the concentration camps, it was the Hungarian Nazi's and the Hungarian people themselves.  The people of Hungary want to claim responsibility for their actions, not blame others for their past.   Because of the constant demonstrations and anger, the site is constantly guarded by the police.  In spite of the anger of the people, the monument is still going up. 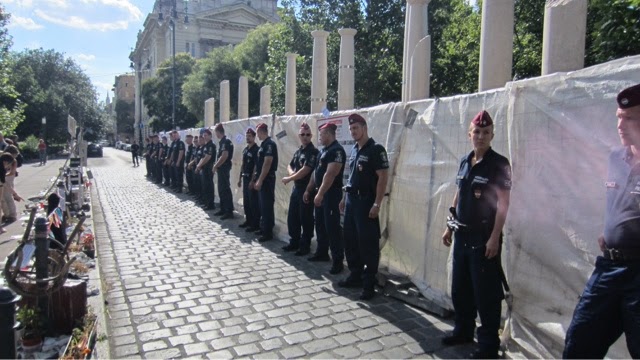 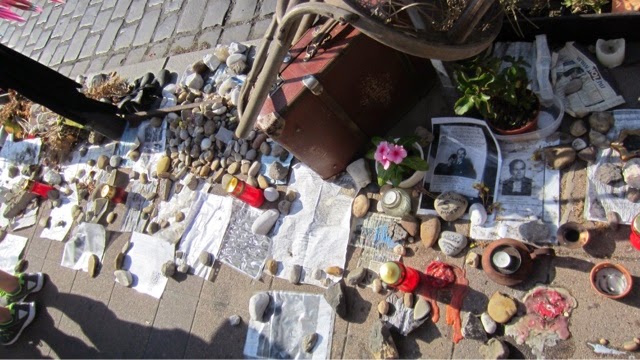 This is a bunker that was recently discovered a few hundred meters from the parliament.  It might have been used during and after the Revolution.  It can hold 1000 people- 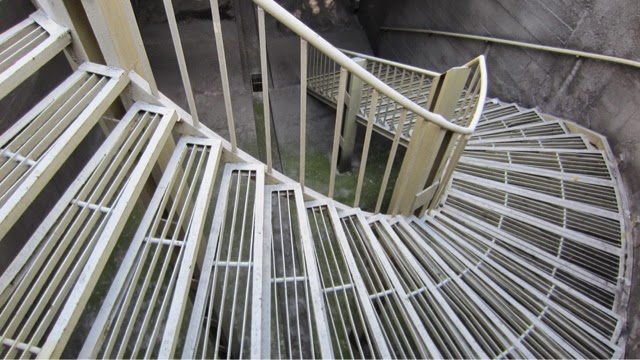 This was the world map shown to Hungarians during communist times.  Notice a few countries are missing! 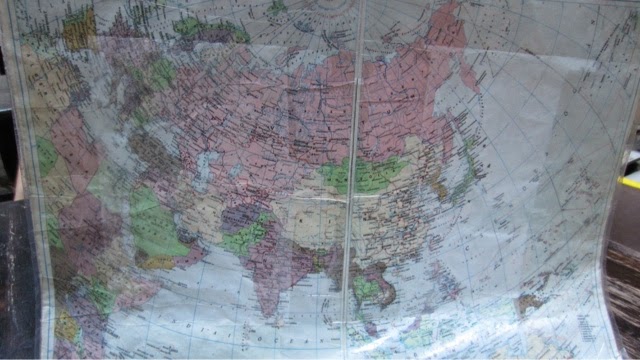 The only monument rememberiing the Soviet Union is next to the American Embassy!  It remains as an honor to all soldiers who lost their lives during the Revolution- 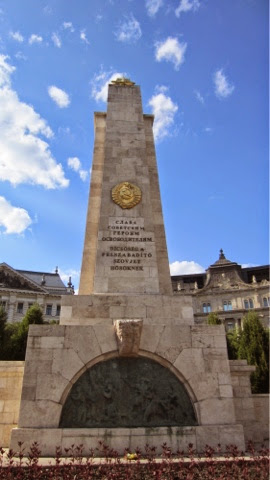 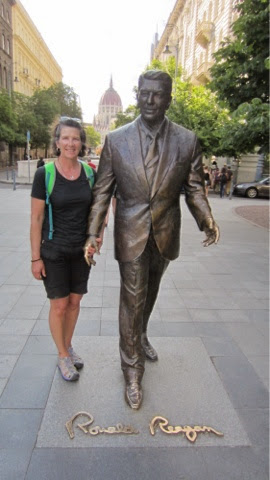 Ruin pubs are located throughout the city in old abandoned buildings.  Nothing is renovated, used furniture is brought in, live bands entertain and people party.  Here is the eclectic decor of the Instant Pub and Club- 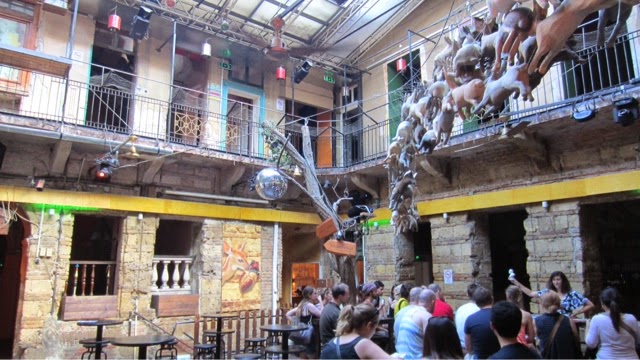 Yes, those are rabbits flying through the air and this owl is suspended from the ceiling- 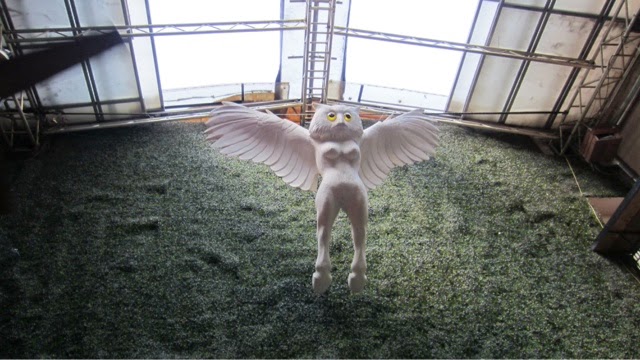 Budapest is a beautiful, culturally diverse city that has witnessed thousands of years of history.  The people are friendly and it is a must see!

So I’ve been home 7 days and have been in isolation - well not really complete isolation because I was with my parents a couple of days and...