Bucharest Romania is an interesting city that is an eclectic mess of unfinished and ignored buildings and gardens, as well as beautiful, but copied examples of Parisien architecture.

2000 years ago, the Romans crossed the Danube in search of gold.  Next came the Habsburgs (Hungarians), Turks and Russians.  In 1877 they declared independence from the Ottomans and Romania was formed.  Following WWII, they endured 43 years of communism until the revolution in 1989.  In 2007, they joined the EU and since, 3 million people have emigrated.

The Romans brought the latin language with them, so rather than speaking cyrillic, like other eastern European countries, their language is slavic, similar to Spanish, Italian, Portuguese and French.

The highlight here is the Palace of Parliament, built by Nicolae Ceausecu between 1984-1989.  (Un) fortunately?? he was executed December 25,1989 and never realized his dream of ranting from this balcony, looking towards the Bulevardul Unirii.  20,000 people were displaced and an entire suburb was destroyed so he could build a longer and wider Champs Elysees (Unirii is 6 m longer!)  and other buildings mimicking the grandeur of Paris.  Bucharest wanted to become a 'better' Paris beginning in the late 1800s.  The largest boom in building was between 1919 and the 1930s, however Ceausecu carried this idea forward- 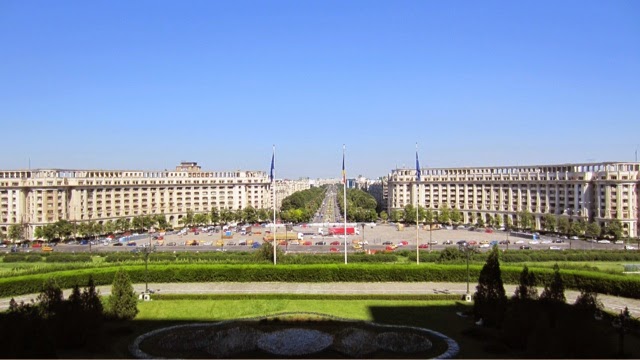 These fountains along Bulevardul Unirii no longer work but I imagine they would be fabulous! 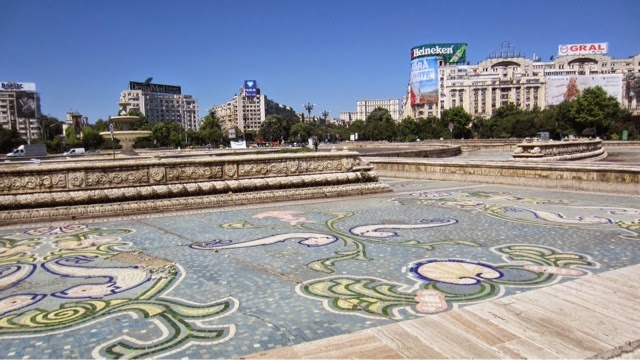 Here is the front view of the Palace of Parliament- 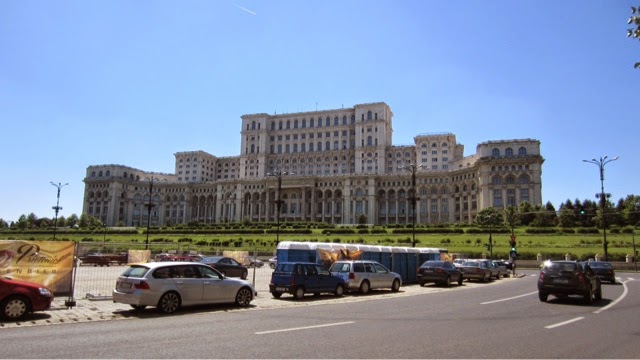 and the side view- 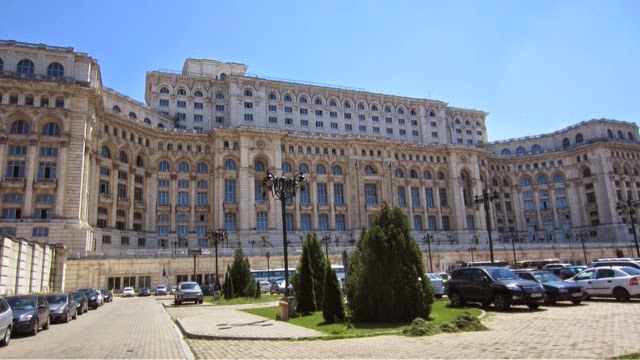 This is the world's second largest administrative building, only behind the Pentagon.  It contains over 1 million cubic meters of marble in 3100 rooms in 12 stories, covering 330,000 m2.  The cost of building it is estimated at 330,000 billion Euros.  A Euro is $1.50 CAN.  20,000 workers slaved away for 5 years but it is only 90% complete.  The largest chandelier weighs 5 tons. There are 66,000 light bulbs in the place!  4000 people work there today but still, thousands of rooms are empty.  It is now used for the Romanian parliament.  It costs $8.50 CAN to enter, but another $10.00 to take pictures inside (which I didn't do).  It has a nuclear bunker in the basement and a private subway to the airport.

This Inn was for caravans travelling along the Silk Road.  Bucharest is the last stop to the west.  It was built in 1808- 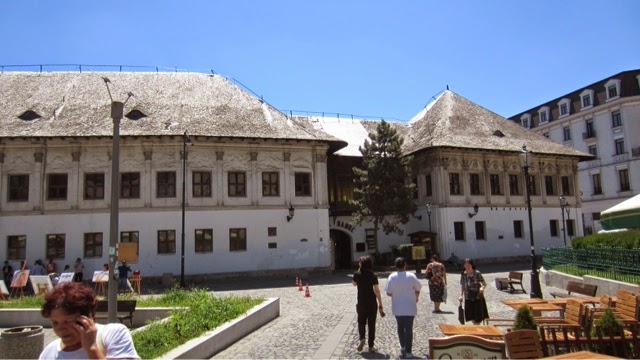 I enjoyed a typical Romanian lunch here of sarmale - meat cabbage rolls and mamaliga which is polenta.   Garnish was a cooked bay leaf and a hot pepper- 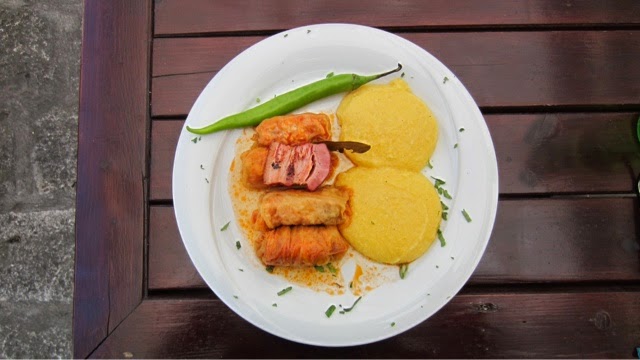 87% of Romania is Eastern Orthodox Christian.  This church, the Stavropoleos,  dates from 1724- 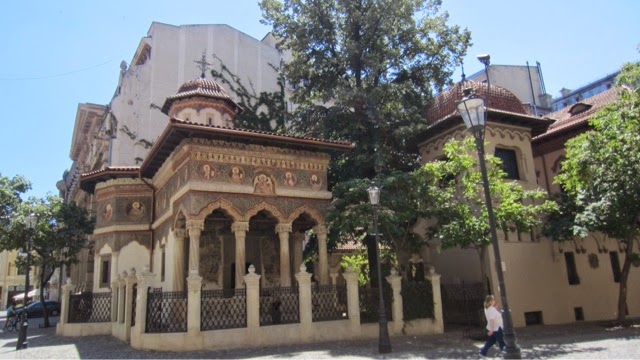 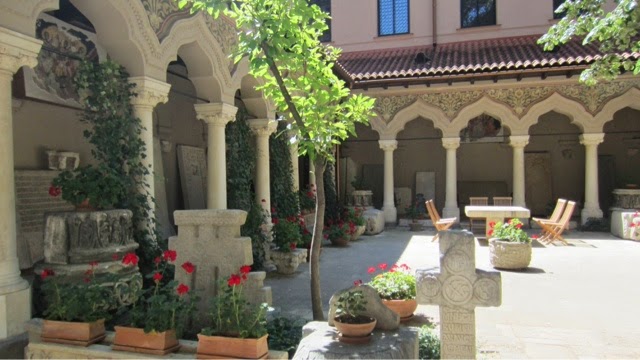 And speaking of demolished churches - the communists destroyed 20 churches because they were 'in the way' of development.  However, six were moved - this one only 50 meters.  Imagine the expense- 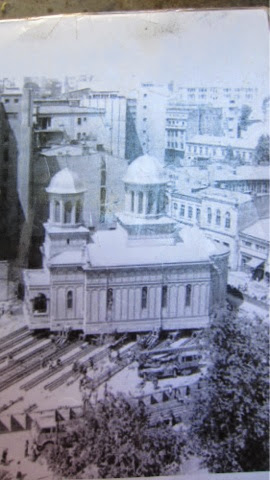 Sometimes rather than moving a church, tall apartments or other buildings were just built in front of it, with the hopes that the people would 'forget' about worshipping. 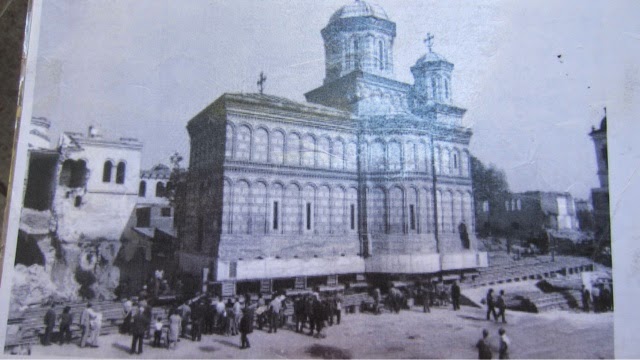 The Romanian Athenaeum was built in 1888 from lottery proceeds.  Today it is used for concerts.  A man was singing opera as I walked by.  It was beautiful- 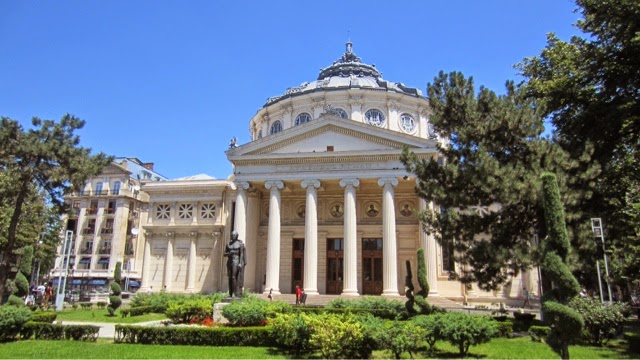 This statue has been voted the 'ugliest' in the city.  It depicts a Roman emperor holding a she-wolf with a snake protruding from her head- 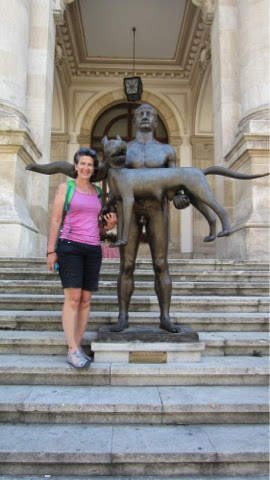 (Yes I do wear pretty much the same thing everyday!)

Romanian independence rallies began in mid December 1989.  The people protested, cut the soviet symbols out of their flag, and loudly sang their national anthem.  Around 100 were killed.  This is Revolution Square.  It is an interesting statue - the white is the rise of democracy going through communism.  It continues with the impaling theme of Vlad Tepes- 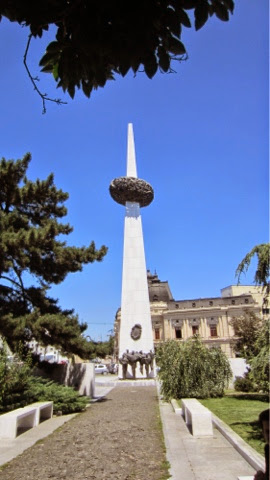 I spent a lovely day here but all good things must come to an end.  We are on our way to Bulgaria tomorrow.....