I spent the morning working on yesterday's blog and then it disappeared again, so decided to go for a walk and see some more sights.  A person could spend many days, months and probably years in this huge place and still not see everything.
My first stop was Iglesia Santo Domingo.  It's a baroque style church built in 1736.  It too is sinking as there are cracks in the big marble floor tiles- 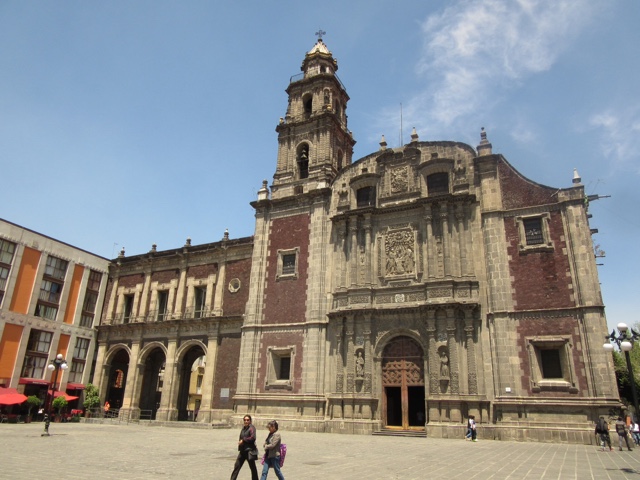 The inside side altars are very ornate- 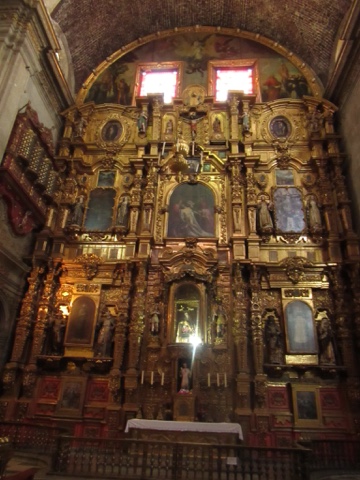 It looks like Jesus or somebody is peering down on all thee sinners.  There are collection boxes everywhere, especially along the prayer rails.  These people who have miserable lives and have been brainwashed with guilt and thoughts that they aren't worthy think if they pay, things just might improve.  WTF I say.  How does that even make sense?  It's kind of an oxymoron isn't it?  An all loving God wants you to pay so life gets better and the more you pay, well maybe, just maybe, things will get better.  But what if they don't?  Pay more?  Some of these people don't have enough money to eat let alone buy their way to heaven.  Okay, stop- 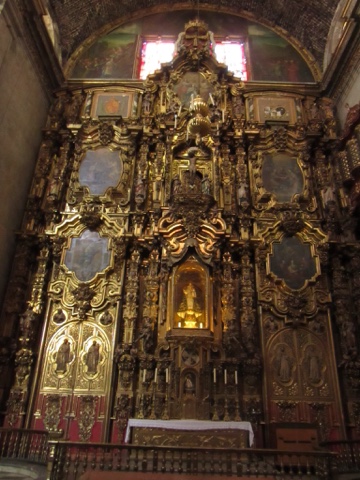 I stopped at a street stall for Tacos al Pastor and talked to the salsa maker for her recipe.  I need green tomatoes: they come wrapped in a leaf and I might be imagining it but I think I've seen them at No Frills.  I  need to fry the green tomatoes, garlic, onion and mora peppers in oil and then blend it with water.  I can't imagine that my salsa will taste anything like what I've eaten here but I'll try- 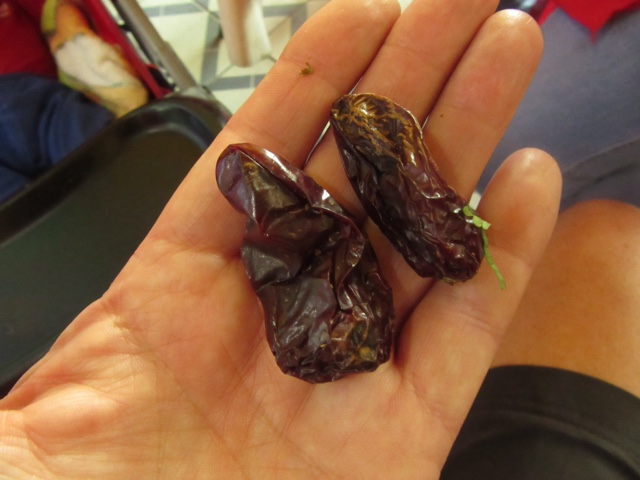 I wanted to get a view from the top of the Torre Latinoamericana so I had to have lunch there or sit at the bar that faced the wall.  Darn.  I haven't had flowers in my salad since I had a great meal at Treenie's- 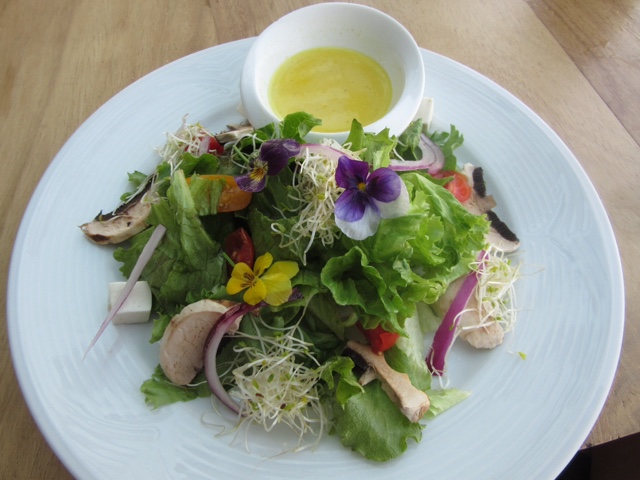 The view is great from 41 stories up. I can almost see 24 million people waving!  Looking west- 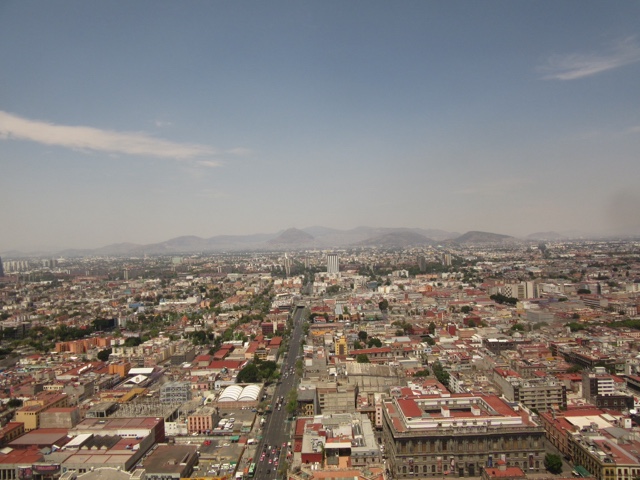 The Zócalo is in the middle where the white tents are set up, showcasing the agriculture, food and culture of the country in an exposition that's been on all week.  The long horizontal grey building behind is Palacio Nacional and the Catedral is to the left- 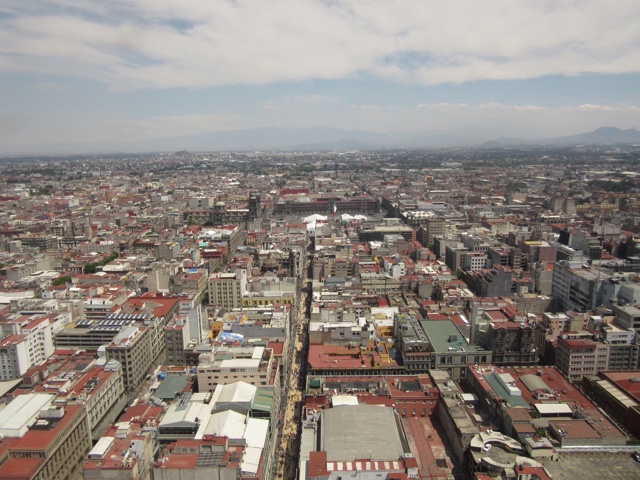 Looking south and to the "modern" city- 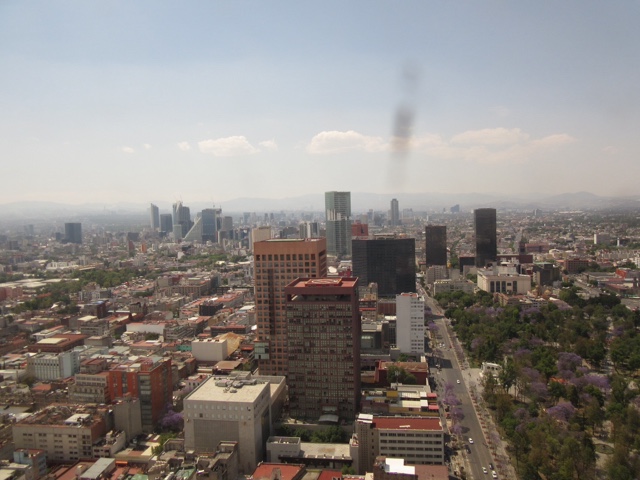 It's a civic holiday so the streets were packed- 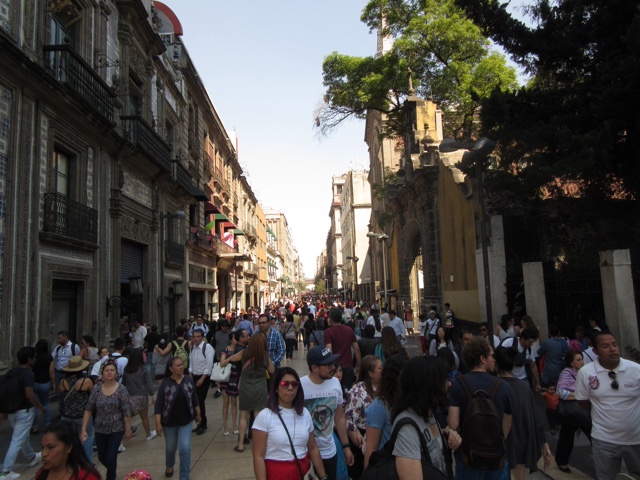 Tomorrow I'm hoping to visit the National Museum of Anthropology before I make my way to the airport for my 4 pm flight.  That is,  I think I'm going home tomorrow.   After I entered my passport information to check in on line, I was told I'd have to have a visa to enter Canada and to please contact the nearest embassy.  Because I got a new passport along the way, it now says it was "issued" in Santiago, but it wasn't really.  It was issued in Ottawa which is why it took 21 working days to get.  So even though it says I'm a Canadian citizen, as soon as I put Chile in as the issuing country, I'm Chilean!  Crazy!  I called WestJet and Jamie was dumbfounded by my problem.  30 minutes later and after resetting my account it still didn't work but she assured me I'd be okay at the checkin desk!  We'll see!
at March 19, 2018