I had another great day in warm sunshine!  I wanted to go to the village of San Juan Chamula, but I didn't think a tour was required.  It's pretty easy to catch a collectivo - no chicken buses here, and for $1.20 go.  So, this meant I had to walk up the hill towards the market.  My first stop was the dilapidated Iglesia de Santo Domingo.  It is in bad need of restoring but is still open to the public- 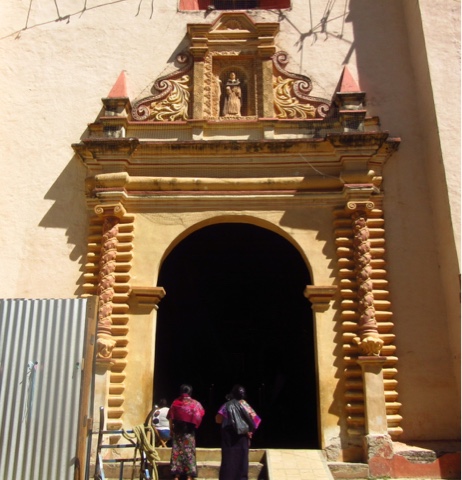 Inside, people were praying around numerous candles and Jesus is laid out - all for Lent- 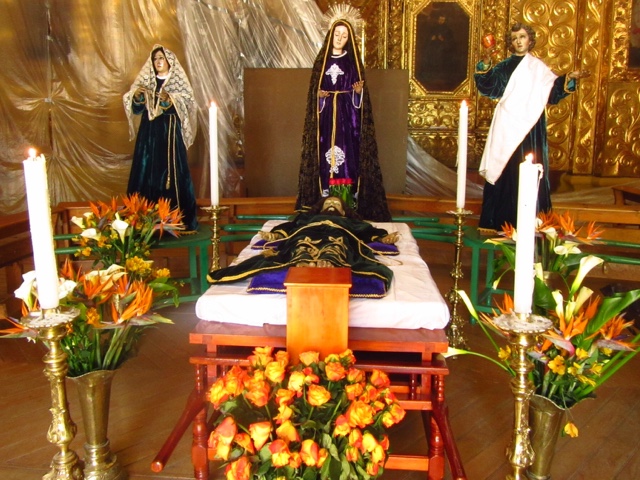 The church is surrounded by market stalls, in fact if you're too busy looking at the souvenirs, you could miss the church entirely.  Raw black wool from sheep is available because women use it to make skirts and men use it in tunics- 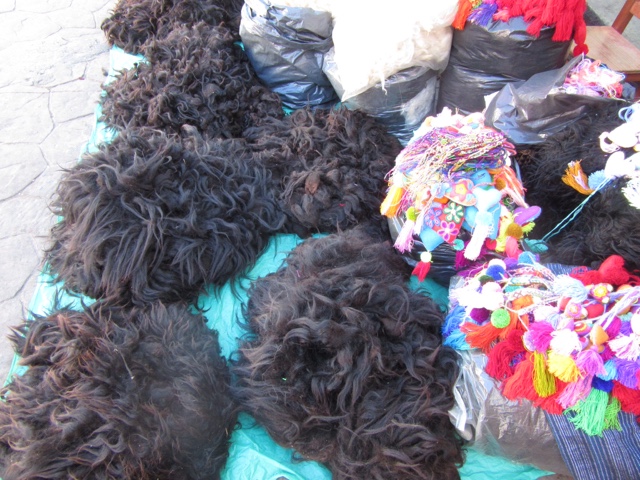 The main market was packed with vendors and shoppers.  This woman knows what she's having for supper- 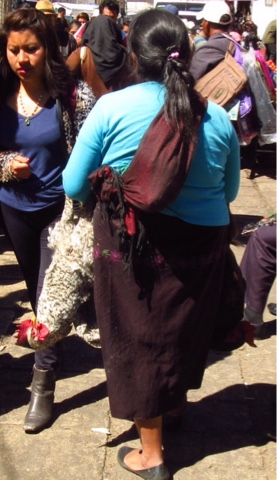 I finally found a collectivo and headed to San Juan Chamula which is a small village 7 km north of San Cristobal de las Casas.  It's known for its church.  There's a large square that was pretty empty.  Not a market day I guess- 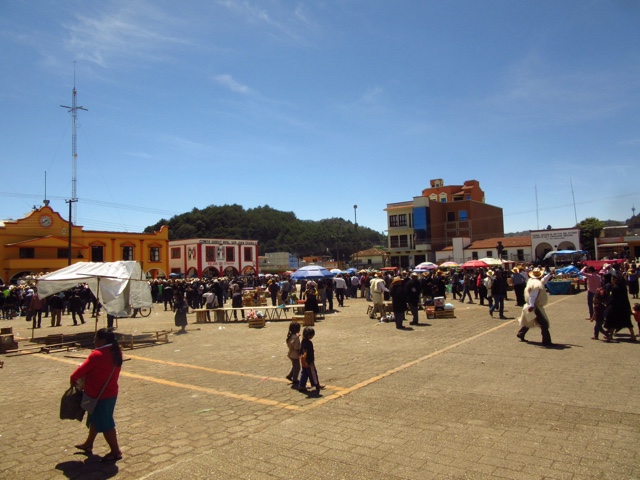 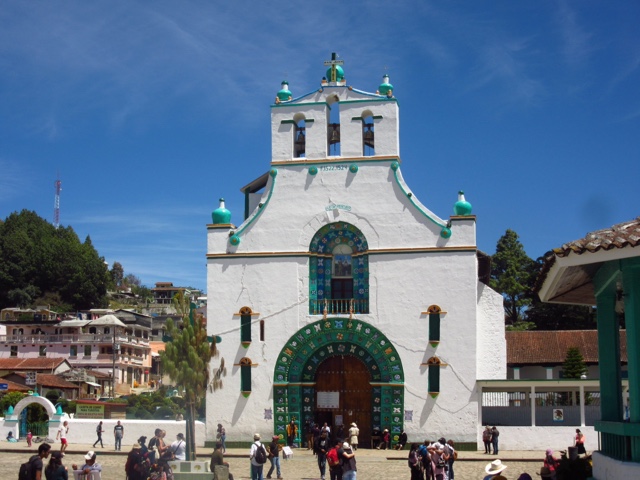 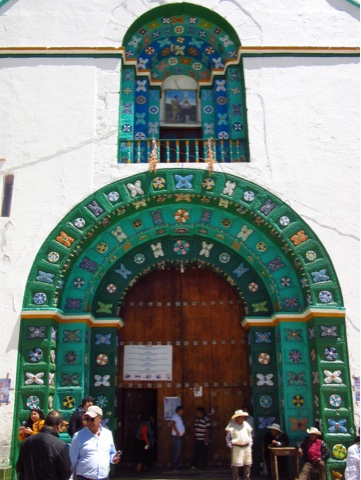 No pictures are allowed inside because it is a very sacred space.  Not that other churches aren't but I've never been in a church like this before.  There is grass spread all over the floor and if there is one candle lit there are 500.  People are sitting on the floor in front of different saints saying different prayers, depending on what they need.  Unfortunately I didn't see a shaman at work or a chicken sacrificed- 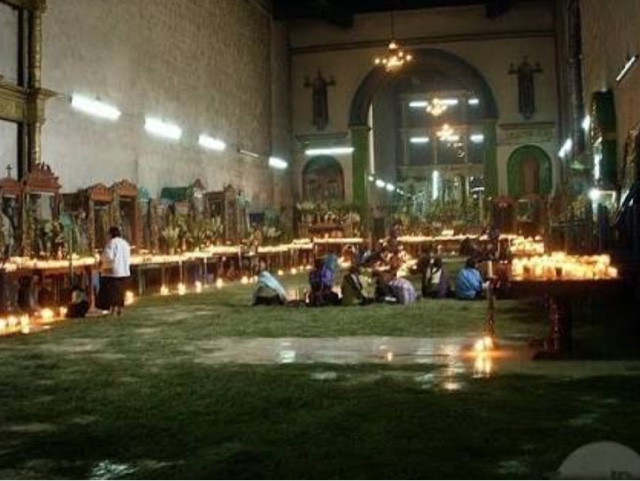 Photo courtesy of tripwow.tripadvisor.com
When I left the church, the bells were ringing.  They are not automated: the three men were going crazy- 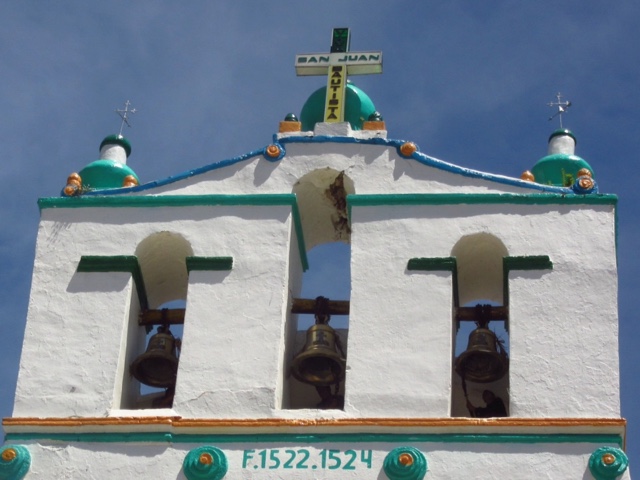 In the square, there was a bingo in process.  The men wearing white wool tunics were on the stage and according to a man in the audience, they are the 'big guys', meaning they are the important political men in the village- 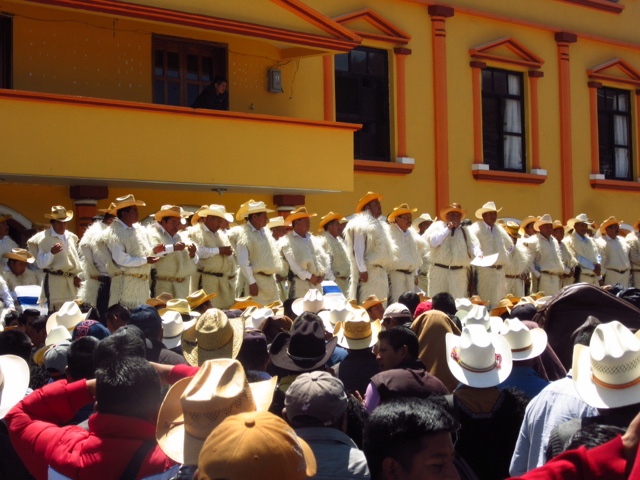 The men in black are the 'little guys', less important.  The man I talked to was hoping his number "109" would be called so he'd win some money.  I did see some winners with t-shirts- 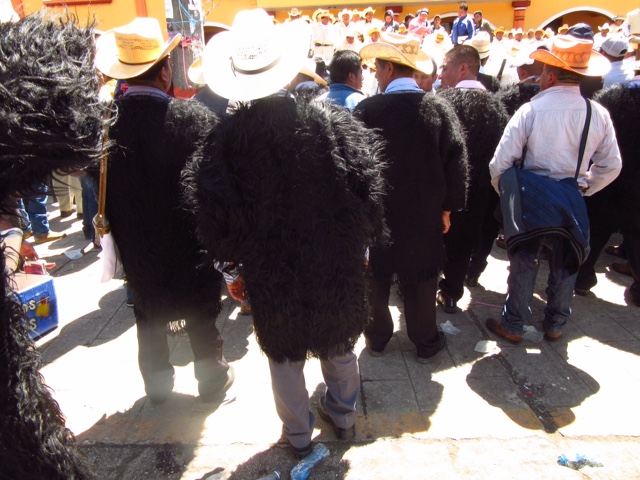 San Juan Chamula is also known for its gourds- 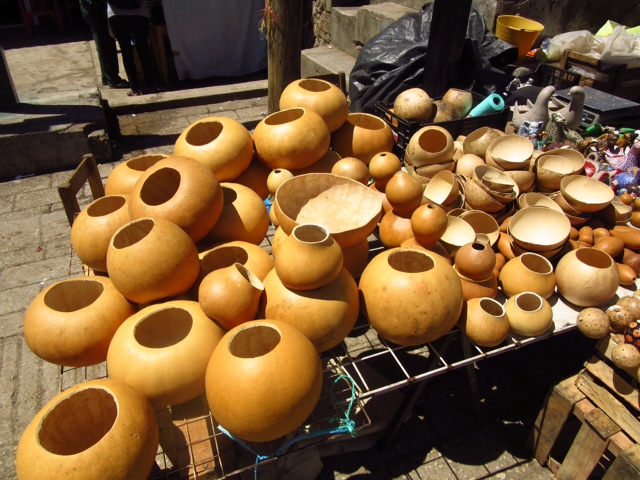 They also were selling chicharrón which is deep fried pig fat- 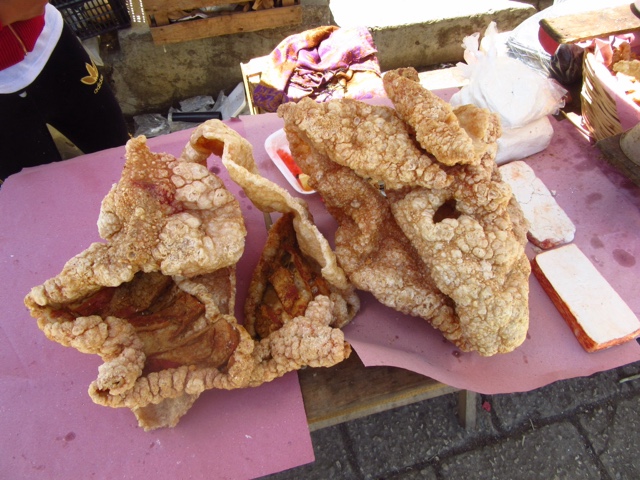 Once back in San Cristobal, I visited the Museo de la Medicina Maya.  Tzotzil and Tzeltal traditions are explained.  There are five specific areas of practice including the pulse reader, the mountaintop prayer healer, the midwife, the bone healer and the herbalist.
The pulse reader feels the patient's pulse with three fingers.  They check to see if the illness comes from fright, envy, bad spirits or nature.  Once the cause of the problem is diagnosed, healing is done using products from nature.  While feeling the pulse, the pulse healer hears a voice explaining what's affecting the patient.
The midwife knows which herbs need to be used for reproductive ailments, before and after birth.
The mountaintop prayer healer prays on a specific sacred and spiritual hill.  He uses candles, incense and basil.  He prays when there's a crisis in his community, for the harvest, for rain, to heal a family conflict or illness.  He's summoned by the spirits to bring health to the community.
The bone healer works witih breaks, joints, sprains, inflammation, swelling and bone pain.  For treatments, massage, whistling, blowing and praying are used.  Blowing chases the bad spirits away and whistling frightens them.  He also uses herbs, incense and candles.
The herbalist knows how to ask the permission of the plants to cut them to use for healing.  Most plants should be cut in the morning when they have the most energy and essence.  The healer must pray before he goes looking for plants and ask for forgiveness for cutting them.  He knows which part of the plant to use, how to prepare it, what it cures and how to store it.
All of these healers have a 'don' - a force of nature and/or power from the gods.  The 'don' is received in a dream and usually hereditary, meaning if a parent or grandparent was a healer, there's a good chance that someone in the next generation will be a healer as well.
There are 4 healers kneeling in front of a bush, facing a mural.  When I first walked into this room, I thought they were real people so I didn't take a picture.  I didn't want to stare at them too long but walked around them a couple of times watching for movement.  One of the women seemed to be watching me.  Finally I walked into the next room where another woman was on display but I could easily tell she wasn't real.  This meant that the 4 weren't real either so back I went to take a picture.  I had a good laugh over that one.  The mural represents the village and Mother Earth.  There is a foetus in the lake representing the birth that comes from Mother Earth.  For the Indigenous, the Earth is the highest diety and the goddess of the harvest. She causes good and bad.  The Indigenous also believe that all things have souls.  When we die, we return to Mother Earth as a favor to her for feeding us throughout our lifetime- 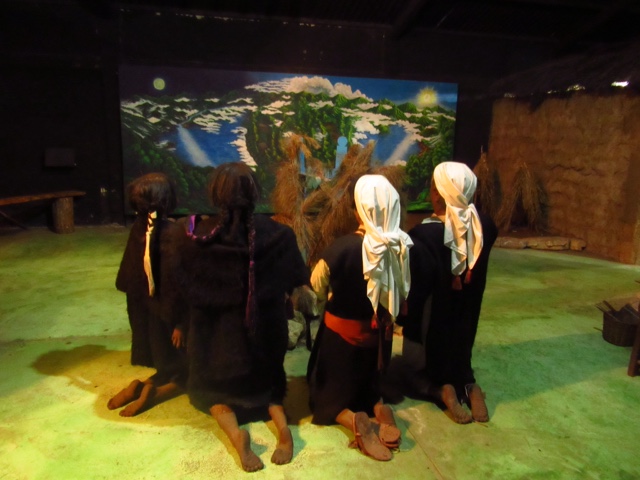 The colors of candles are significant:
White is for Mother Earth, God and purity.
Pink or blue is to cure illness, for one's partner or so a business succeeds.
Yellow and orange get rid of bad energy, negativity or envy.
Green is used to get rid of illness.
Purple is used to accompany other candles.
Red returns negative energy to its owner.
Gold brings happiness and is used with white candles.
Beef tallow is used to get rid of and dominate over evil.
A certain number and sizes of candles must be burned when asking for certain things.  For instance, if you want to ask for a longer and better life, or ask that you do not become ill or that you are content living in your family and community, you must burn thirteen 50 cent white candles.  Or if you want to prevent and cure illnesses such as seizures, diarrhea, vomiting, anxiety, fever, headaches etc, you must burn 13 small white candles, the ones that sell three for 10 cents, 13 small yellow candles, 13 small red candles and 13 small gold candles.  I am not making this up- 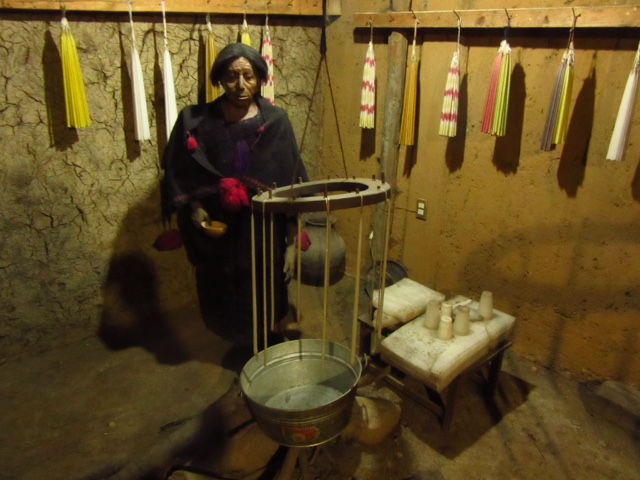 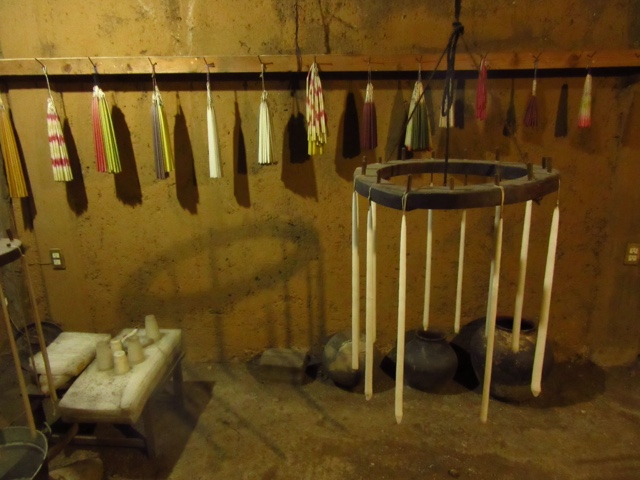 Birthing takes place in the woman's home.  The husband sits in a chair supporting his wife's arms and torso.  The midwife presses the woman's belly downward from behind- 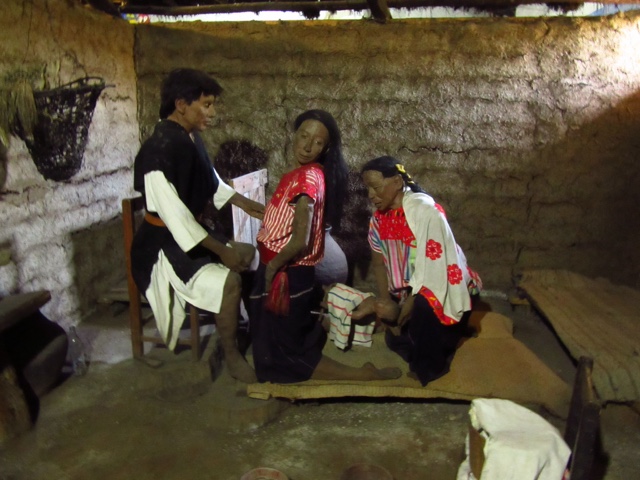 At the museum there is also a sanctuary.  I couldn't take pictures because a healer was in there with a client.  When I first went in, the healer was speaking to the client and the next time I went in, he was kneeling on some grass that was spread on the floor in front of a lot of lit white candles.  He was praying, talking a mile a minute.
One of the many cleansing methods is the patient sits, stands or kneels in front of many candles of the required color for the problem.  The candles are on the ground in front.  The healer prays to make contact with the spirits and saints.  The prayer is said in a loud voice.  The healer inhales deeply and exhales with the prayer.  Basil or pine needles are passed over the client's body from head to toe.  Sometimes a chicken is passed over when it's a physical illness.  The healer spits posh, a liquor, over the patient, in front, behind and on all sides to scare away bad spirits and bad winds and to purify the person.
Other aids used to help in healing include incense and flowers which are foods for the gods.  Pine branches are placed on the altar and each branch represents a person for whom prayers are said.  The cross is the goddess that guards the home, the altars, the springs and ceremonial hills. Blowing posh brings contentment, strength and removes bad spirits.  Today pop is used to cleanse the ill person.  It's offered to the gods and sprayed amongst the candles to chase away evil spirits.  It is a new addition to the healing because it's easier to get than posh and makes a person burp.  Burping releases evil.
There is also a pharmacy where you can purchase dried herbs and other tinctures at reasonable costs- 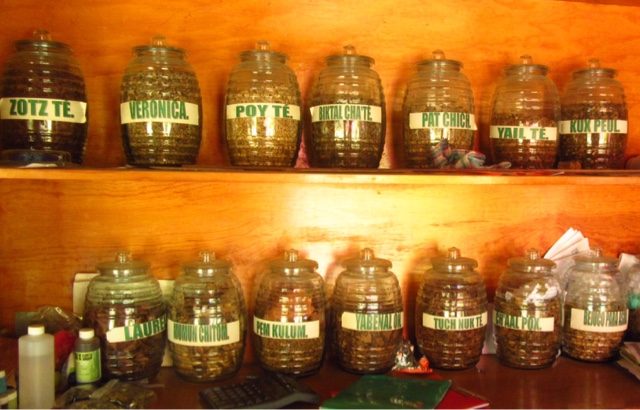 Walking back to the Centro Historico, I passed the market again.  I just can't get enough of the colors, sights, sounds and smells.  Well, sometimes the smells aren't that nice but..... 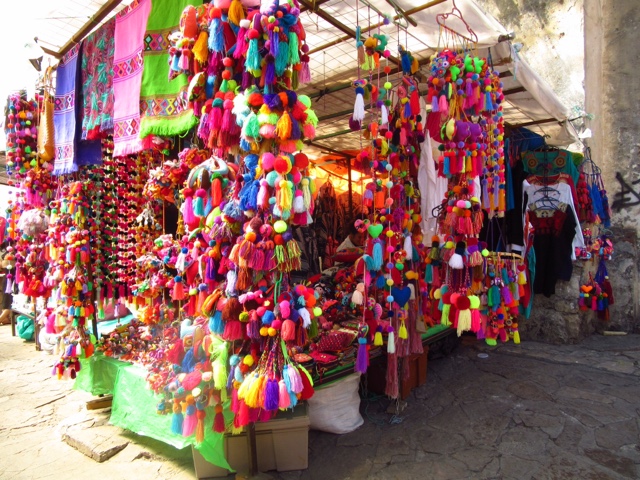 Antigua doesn't have all the colorful buildings- 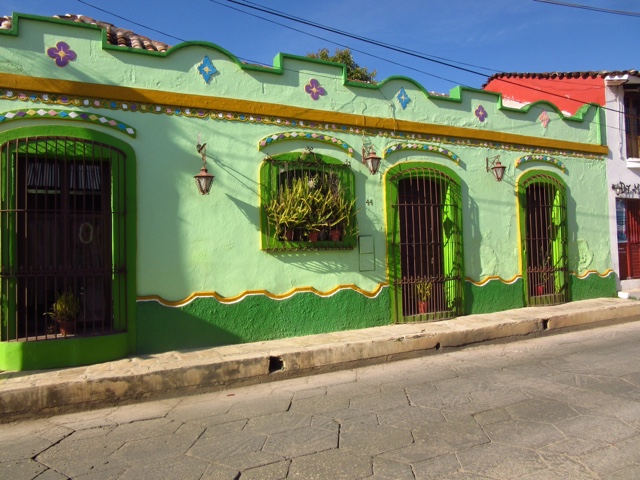 The Iglesia de Guadeloupe is high on a hill- 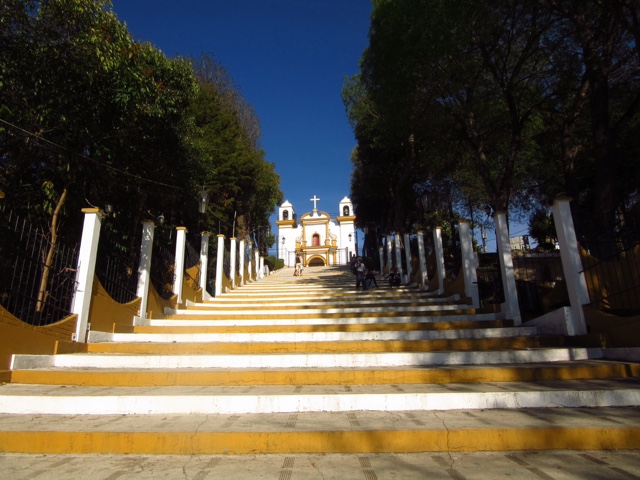 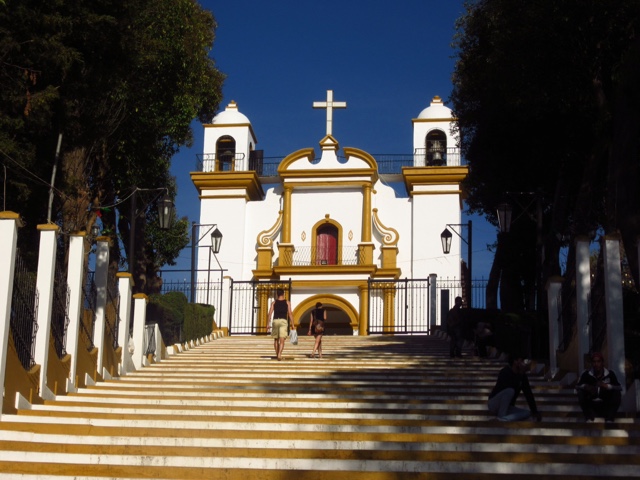 and there's a great view- 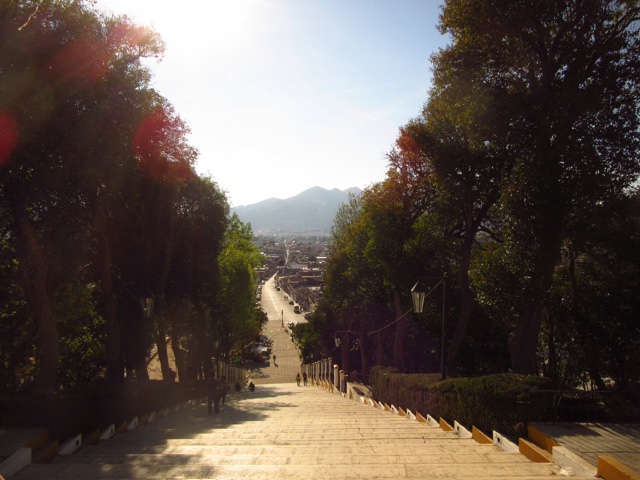 Inside, Black Jesus hangs on a cross- 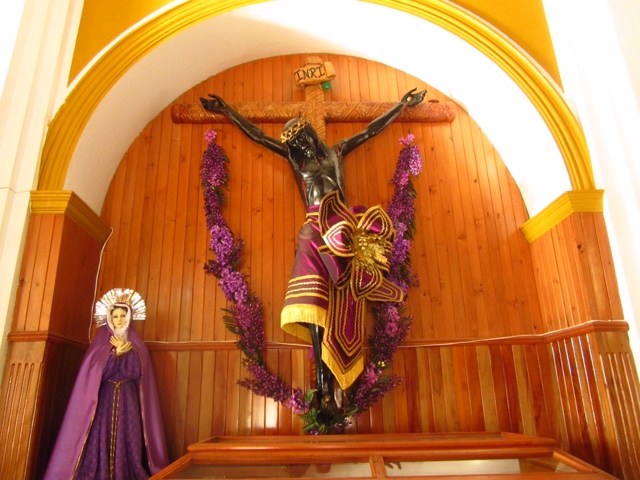 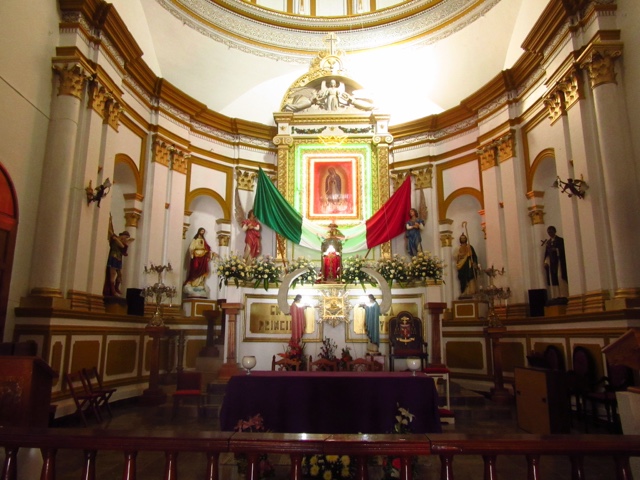 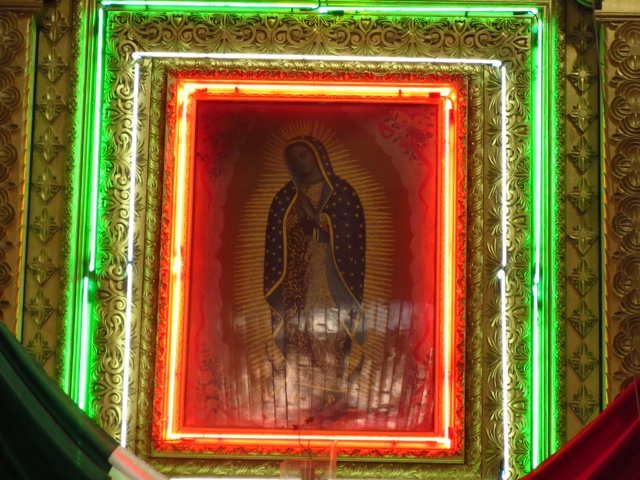 Later, I was enjoying a glass of wine at the Wine Bar when a loud, loud siren went off.  It continued on for quite awhile.  I thought nothing of it but when I went back to my hostel, the owner asked me if I'd felt the earthquake.  The siren warns of an earthquake but it goes off after the earthquake has happened so it's not that effective.
While enjoying people watching and the nice warm day, a young man set up an electric keyboard across the street and started to play.  His girlfriend, or a woman with him, held out a hat, with the hopes of collecting money.  After a few songs, she walked around to the tables with her hat.  I ignored her.  Soon after, 2 young men and a young woman sat down at the table right in front of me.  One of the men started playing the guitar and singing.  He could play all right but his voice - it was flat and not so nice.  He obviously thought he was the next Bruce Springsteen because he sang and sang and sang, louder and more annoyingly all the time.  The woman was allowed to sing one song and she was really good.  I wouldn't have minded listening to her.  Soon, the second man grabbed the guitar and he could really play and thank goodness sing better than the first man.  As I was sitting there, I got more and more perturbed.  I didn't ask them to come and play for me and no they didn't pass the hat but I also didn't really enjoy the loudness.  If I'd have been trying to have a conversation with someone, it would have been impossible.  I kept thinking: I wonder what people would think if I sat down at a table and immediately turned my phone on to play my loud music.  What makes people think they have the right to play and sing in a crowd like that?  They weren't singing to us, they were just enjoying themselves.  Nice for them but I wasn't enjoying them.  The self centeredness, boldness and disregard for others was quite annoying.  I moved to a few tables away until I finished my wine, then left.
I went back to the hostel to get my stuff, hopped in a collectivo that went right by and made my way to the bus depot.  The beautiful first class coach left at 8 for an 11+ hour trip to Oaxaca.  I'm hoping I can sleep okay!
at March 06, 2018