It seemed like I was up before I even went to bed - 2:30 came pretty early!  I arrived at the bus terminal in plenty of time and then wouldn't you know it, the bus was late by 40 minutes- 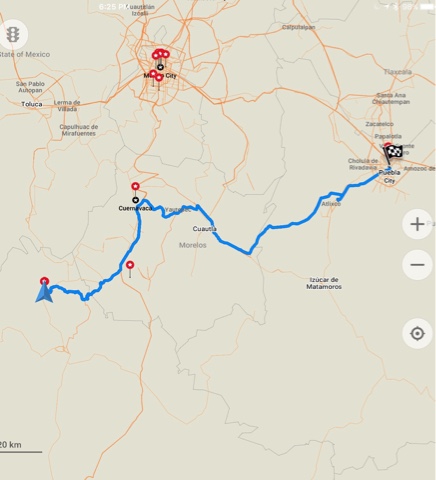 I slept in the bus until the sun came up and woke to the smell of peach juice.  The nimrods behind me spilled their juice and didn't bother to tell me so my backpack and blanket got wet and smelly.
Along the way- 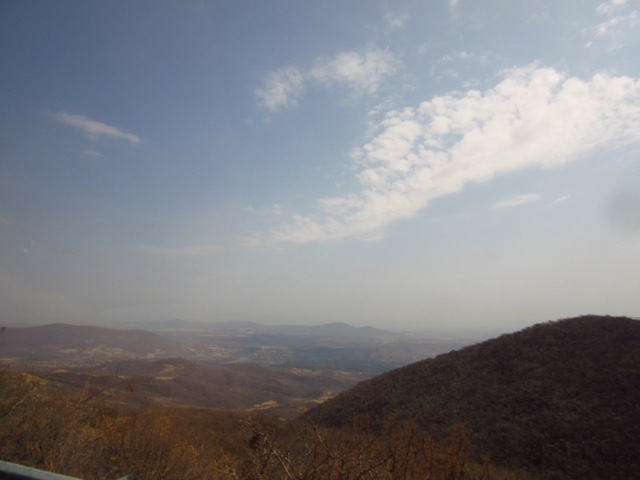 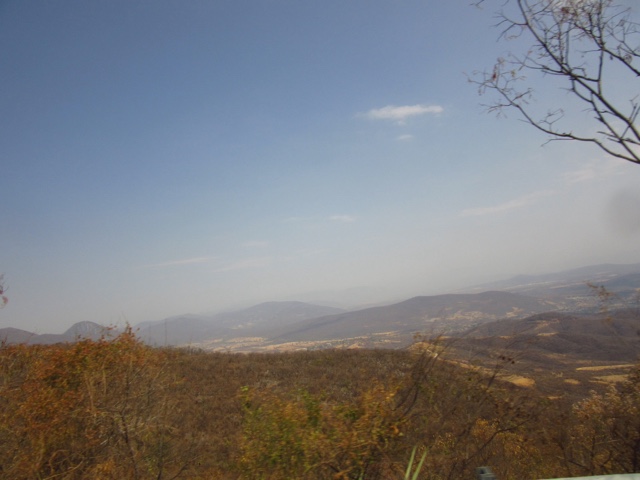 Towns are not only set in the valley but climb up the hills.  Very little is of adobe anymore, it's all cement block- 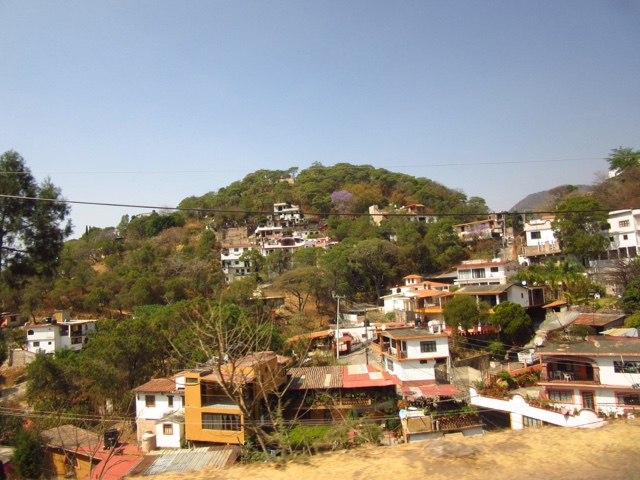 Taxco is set on a hill and all the buildings are painted white.  It's gorgeous and reminds me of Italy- 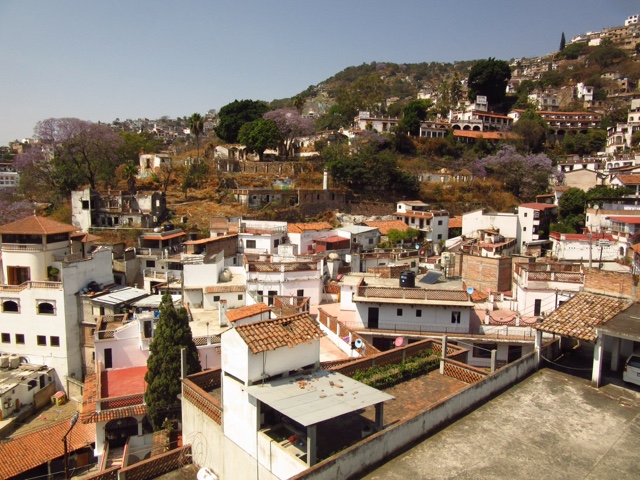 The Aztecs dominated Taxco from 1440 until the Spaniards arrived in 1529.  In 1531, the first Spanish mine in North America was established.  The Spanish were looking for tin but only found small bits until 1534 when they discovered tons of silver.  Of course the silver was quickly depleted and it wasn't until 1743 that more silver was discovered.  Apparently, Don Jose de la Borda was riding his horse and it stumbled, moving a stone and exposing a vein of silver.  He became really wealthy and the Templo de Santa Prisca is his gift to the city.  It was constructed between 1751 and 1758- 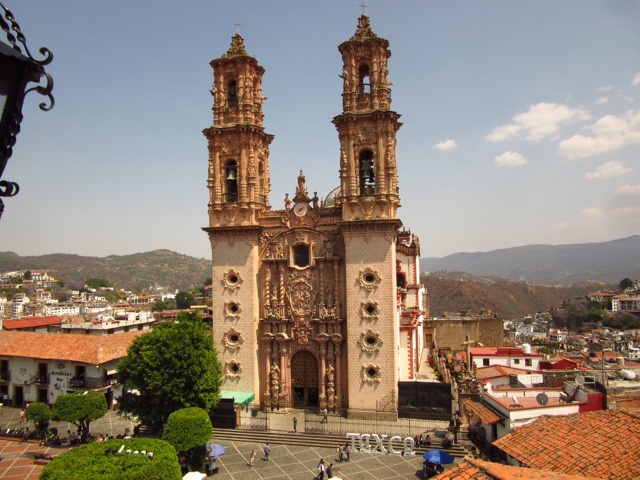 Inside, the baroque architecture is sooo gaudy- 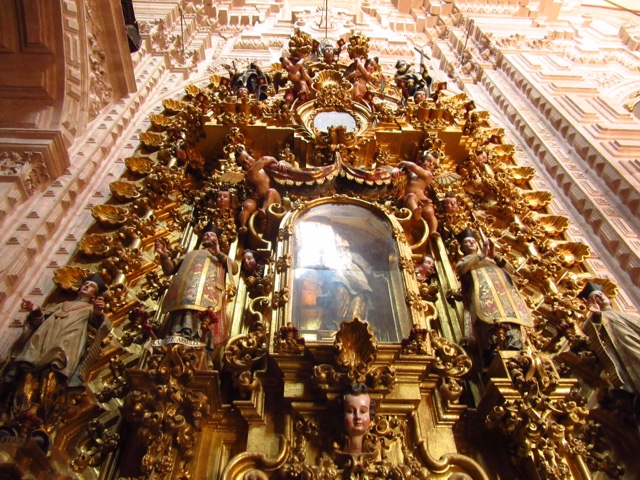 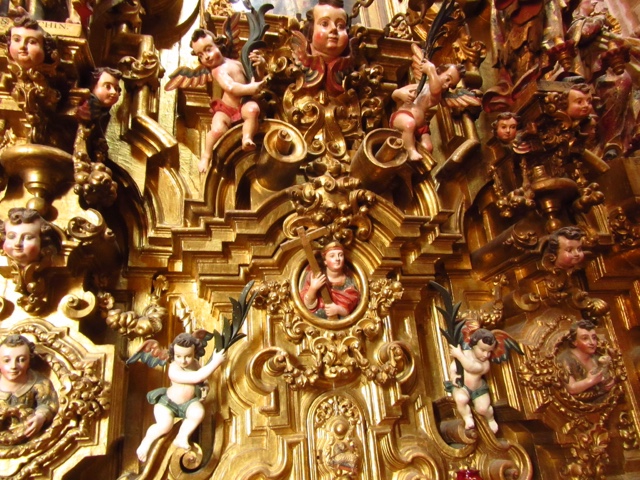 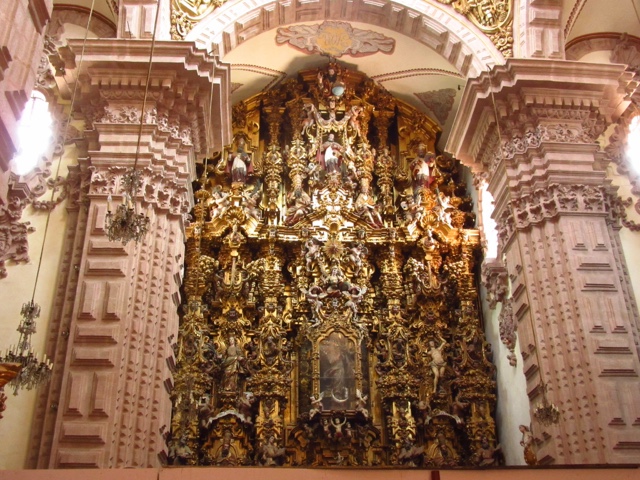 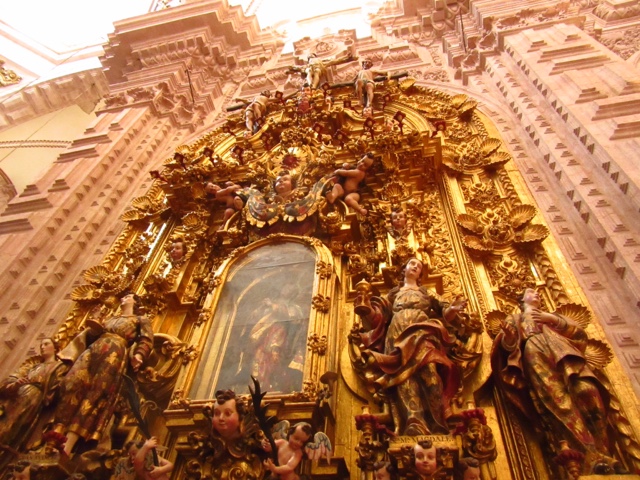 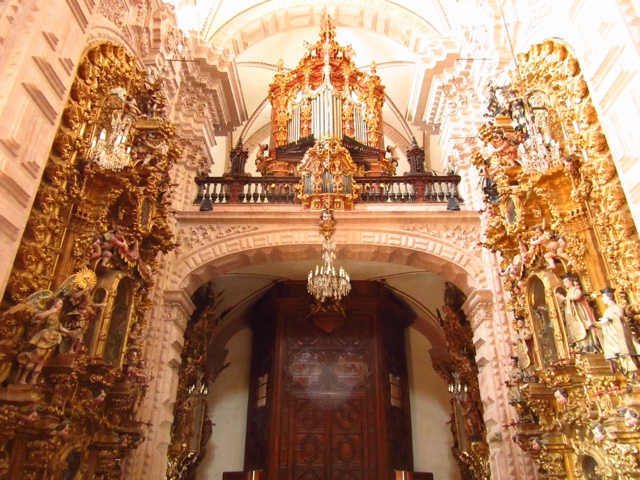 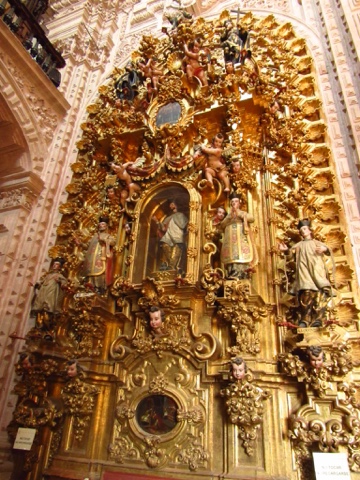 The walls are angels and cherubs- 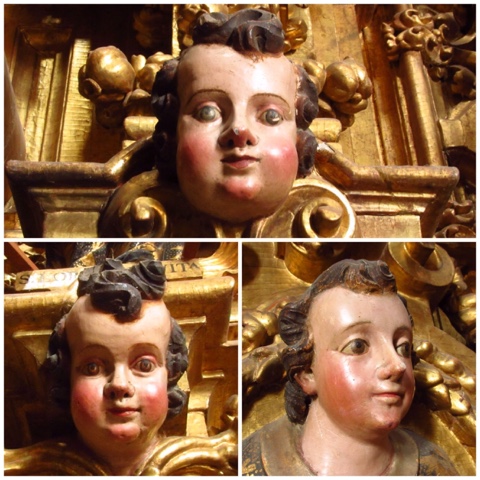 Lunch was conejo (rabbit) with peppers, chilis and garlic.  It does not taste like chicken even though it is a white meat.  It was tougher and denser- 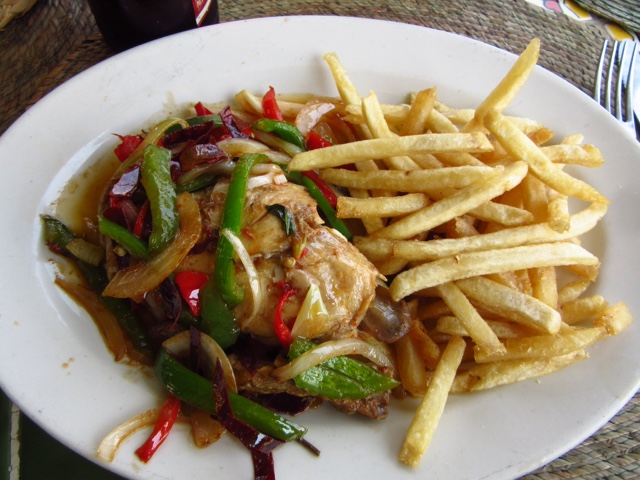 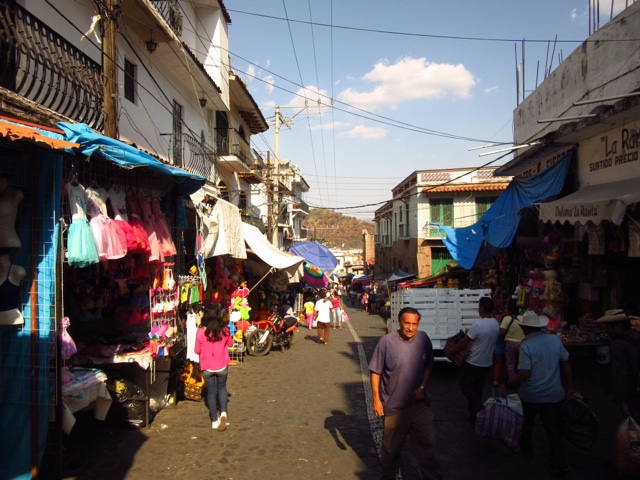 not only of normal everyday goods- 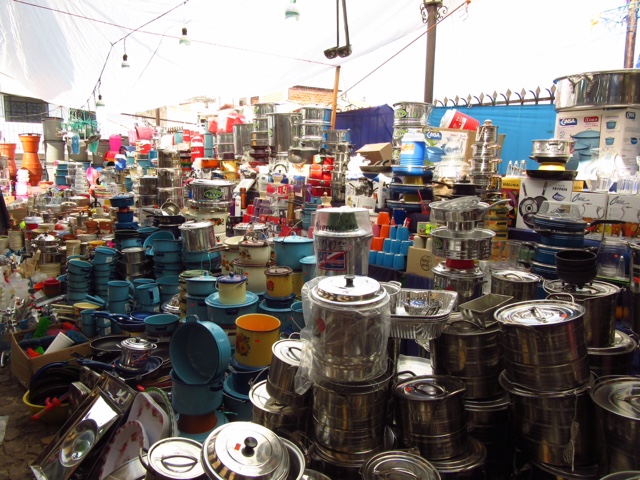 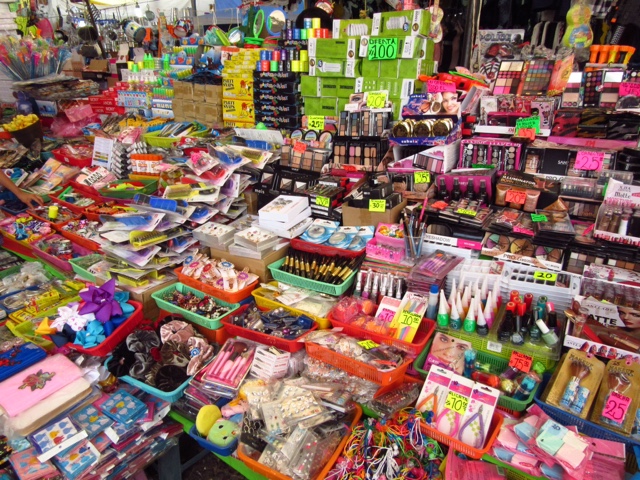 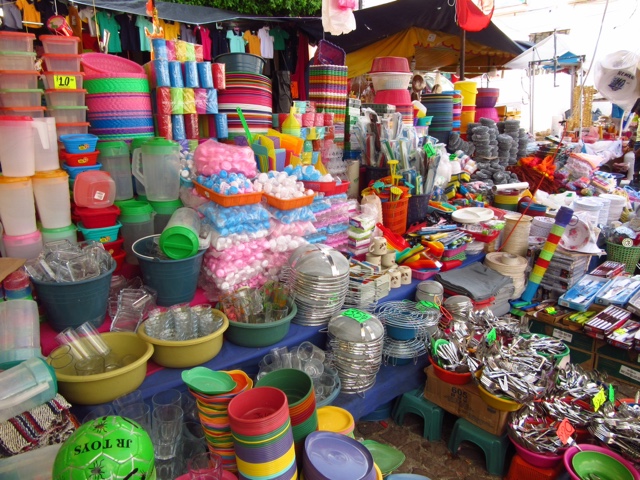 but silver is for sale everywhere and I love silver!  For me it's like I died and went to heaven!  I've bought a bracelet, a chain, a pendant and earrings!
There is a huge police presence here - to keep the tourists safe they say- 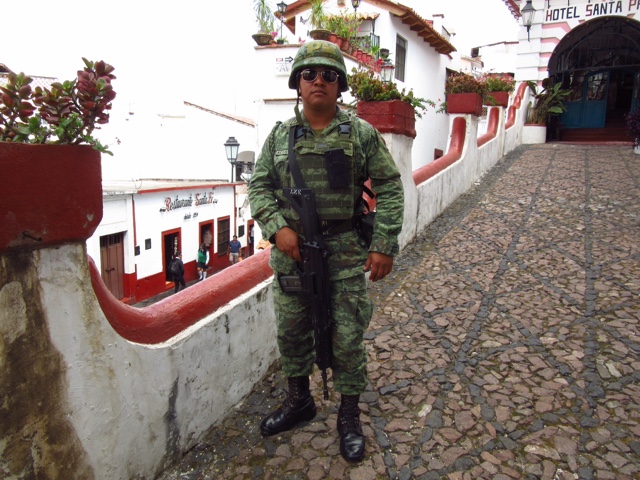 As I was people watching, a loud bell, the kind one room schools used to have, was being clanged in the street.  It was the garbage truck announcing its arrival.  Soon the nearby businesses were taking their bins to the truck and did it stink!  The guy on top of the mound was sorting and emptied the large black plastic bags and gave them back to the owner- 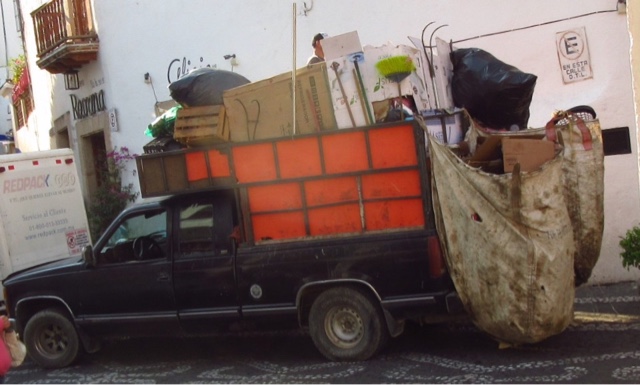 I'm in a great hotel with a lovely courtyard garden.  It's quiet so I'm looking forward to a long sleep.  Tomorrow I'm going to take a collectivo to nearby caves.  I have to get away from all these sliver stores!
at March 12, 2018