On my way to the Museo Nacional de Antropologia, I passed the restaurant where I would eat lunch.  The worker was getting the 'el  pastor' ready to cook.  Pork is seasoned and put on a vertical spit while flames come out of the heater on the right to roast the meat- 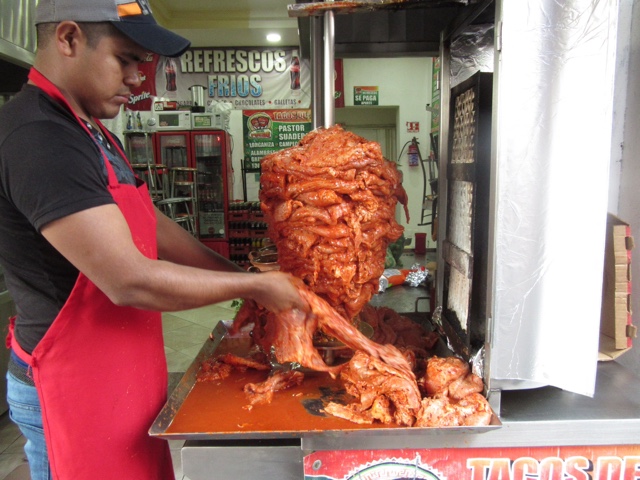 I took the metro and some stations were packed.  I let a train leave without me because I didn't want to be a sardine and found the next train to be just as busy.  I got in anyway and at the next stop, they just pushed and pushed to get out.  It was like a mini stampede!  And, this was in an all women's car.  I wondered why they separated women and children from the men.  It was also funny because I was by far the tallest person in the train and all I could see was a sea of black heads.
The Museo Nacional de Antropologia is gigantic and very well organized. There is always a travelling exhibition and today it was about flowers and their importance in all parts of Mexican life.
Xochicalca is from the Templo of Xochiquetzal dating from 650 - 900 A.D.  He/She is the Precious Flower goddess and is related to the mythology of the people who lived on the Chinampas, the floating gardens- 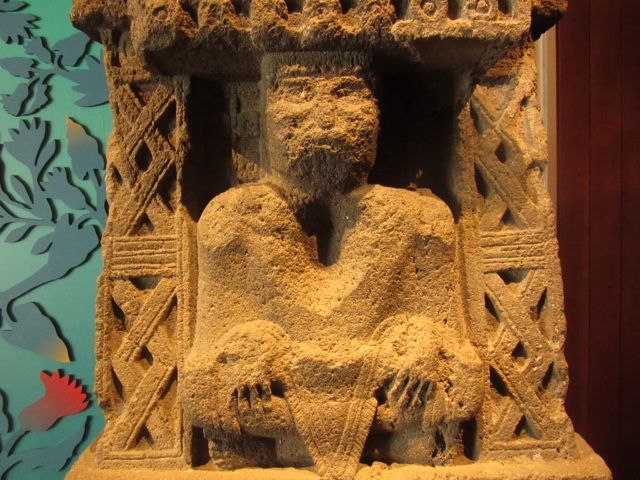 All ancient Mesoamerican cultures used flowers to name deities, in rituals and for sacrifices.  Flowers were as precious as jade beads and quetzal feathers.  They are found on everything- 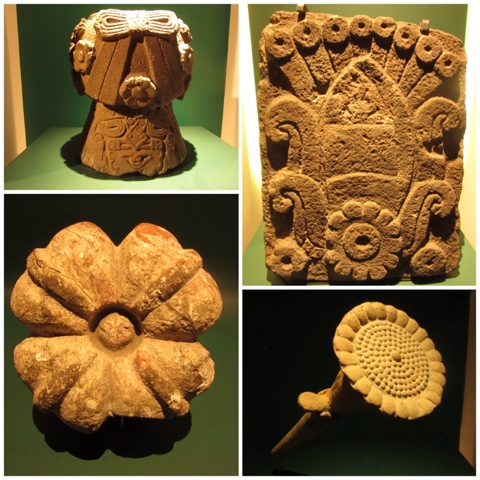 In this 17th century choir book, the flowers around the "J" stand for abundance and the 4 flowers round the "V" represent cypress and Jesus on the cross showing the duality of life and death- 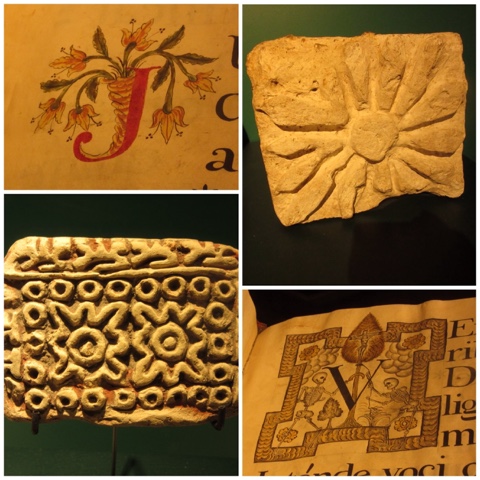 The man's genitals have been mutilated to bleed him.  He comes from Monte Alban - 300-500 AD.  His blood will nourish the earth- 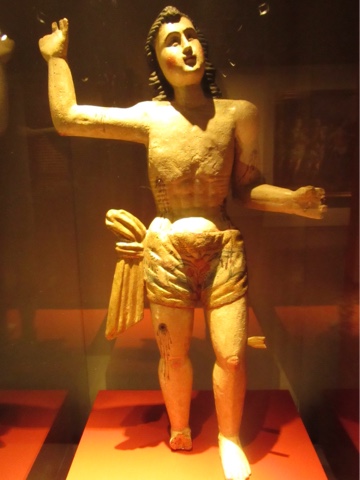 They painted a flower where his genitals were- 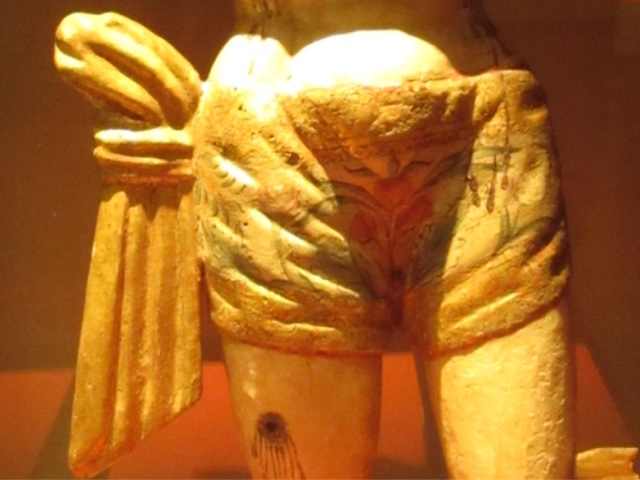 This lamp was really cool.  The light shade is made from paper and the cut outs reflect onto the walls.  The walls were just green and red but the light shade creates the pattern- 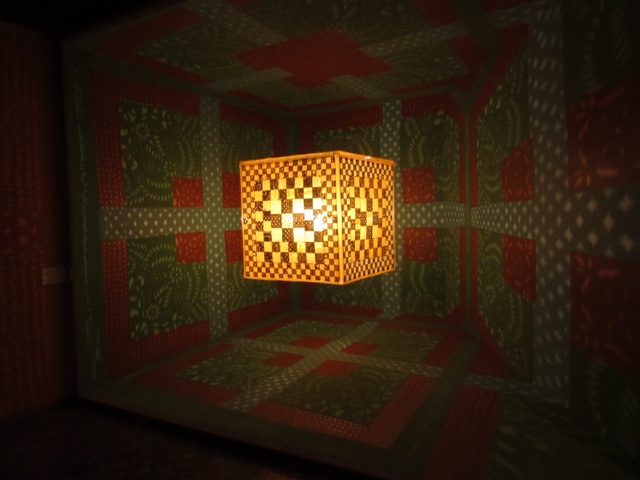 My Grandma Madsen always grew dahlias and everytime I see one, I think of her- 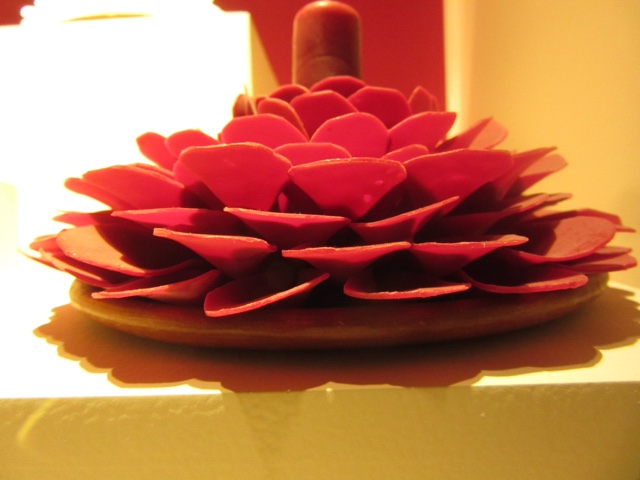 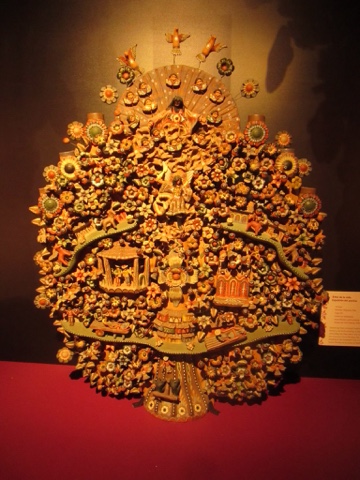 Besides the changing exhibition, there are 12 main halls dedicated to pre-Hispanic Mexico.  Upper level rooms show how the groups live today.  I only visited the main floor salas and that took 2 hours even though I quickly walked through most rooms.
The rooms start with an Introducion a la Antropologia which explains what anthropology is all about.  When I was studying my arts degree, I took an anthropology class so I already had a pretty good understanding.
I think I've seen this person before- 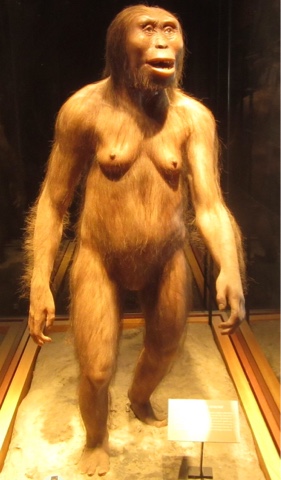 The second room was Poblamiento de América, explaining how the earliest settlers got to the Americas and how they survived and prospered in their new land.  Next was Preclásico en el Atiplano Central, focusing on the pre-classic period which is from 2300 BC - 100 AD, showing how the nomads, who were hunters and gatherers became farmers.  The Teotihuacán room presents information from the Americas first great state with the Sun and Moon Templos and showed what the buildings would have looked like painted.  The paintings illustrate religious beliefs, mythology and rituals- 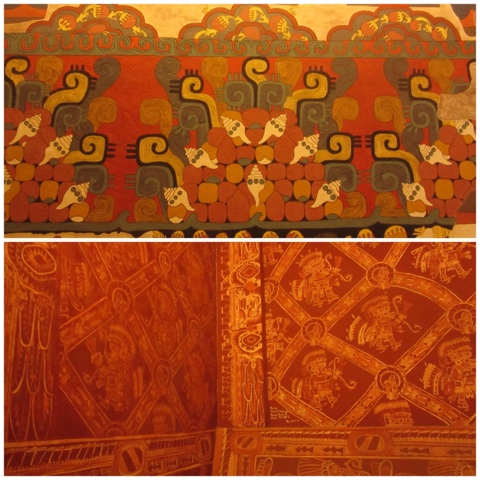 Next was Los Toltecas y su Epoca which presented cultures from 650 - 1250 AD.  Another room features the Mexica, or Aztecs.
The sun stone was found under the Zócalo in 1790 and is an Aztec calendar.  In the centre is the face of Xiuhtecuhtli who is emerging from Earth Hole holding a pair of human hearts.  His tongue is a knife and he's surrounded by four suns- 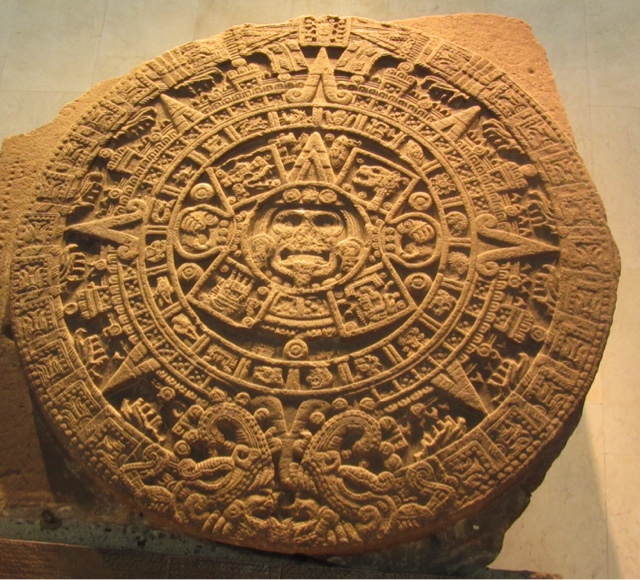 The next room talked about the cultures of Oaxaca including the Mextecs and Zapotecs.  All of these rooms were familiar to me because I've visited these areas.  The next room was about the Culturas de la Costa el Golfo where I haven't been so I walked quickly through.
This gigantic head, weighing 20 tonnes, was found in Vera Cruz, and it dates from 1200-600 BC- 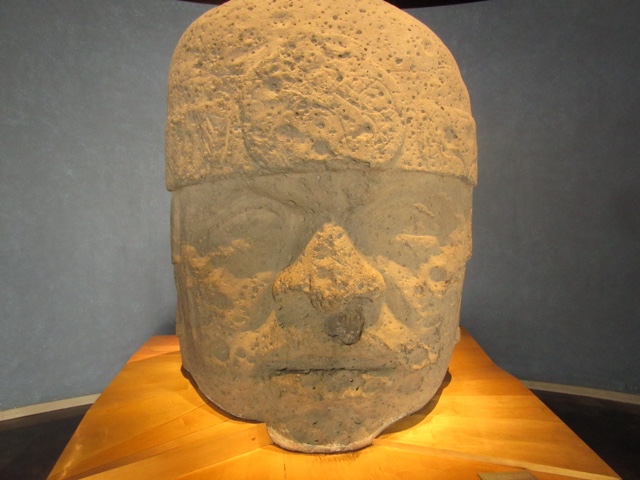 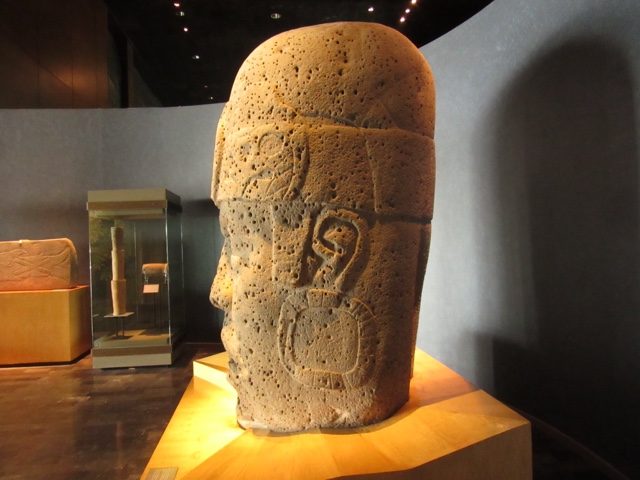 The next room was about the Maya, who lived/live in south eastern Mexico, Guatemala, Belize and parts of Honduras.  A full size replica of King Pakal's tomb from Palenque is on display.  It was found in 1952- 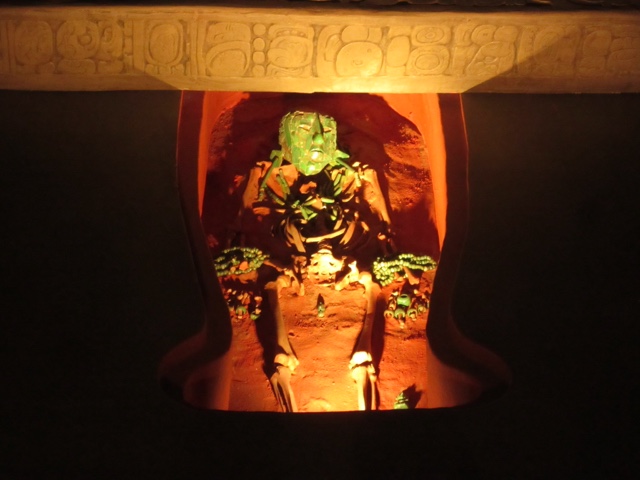 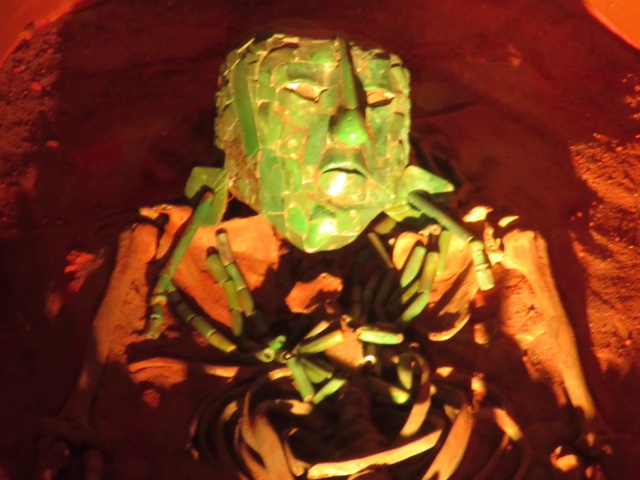 The two remaining rooms were about the north and the west so I breezed through them too.
All the ancient Mexican civilizations played ball in the same way.  They used a rubber ball and had to contact it with their elbows, hips or knees.  A goal was scored when the ball went through this fairly small hole- 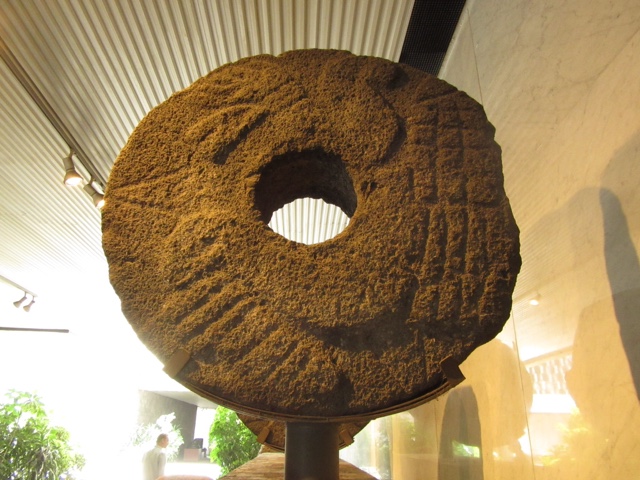 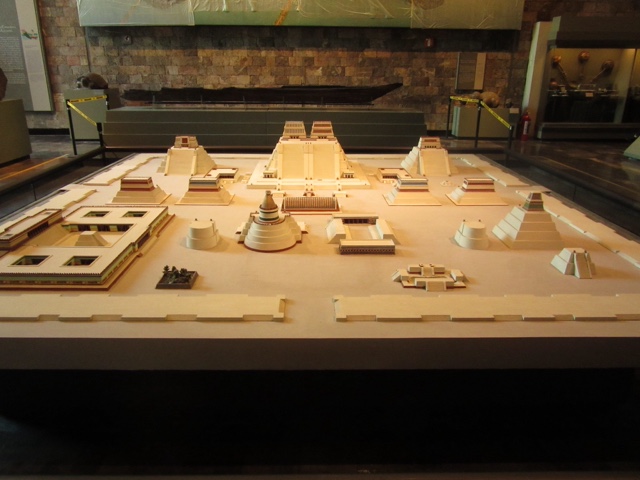 The Bat God mask was found in Monte Alban and is one of the best ever found in all of Mexico.  It's made of 25 pieces of  jade yet the eyes and teeth are seashells. It's the god Piquete Zina.  Three slate plates hang down from the chin and it dates from 100 BC to 100 AD. 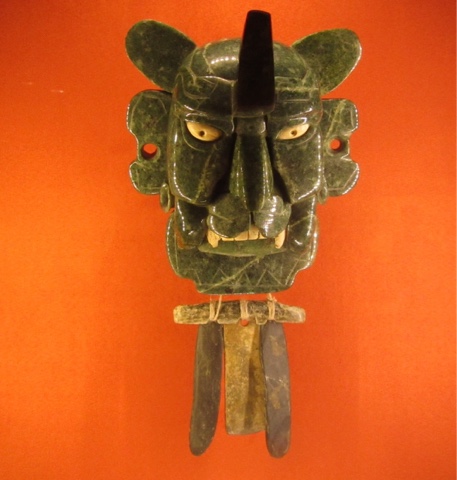 These faces come from Veracruz and have some comic elements- 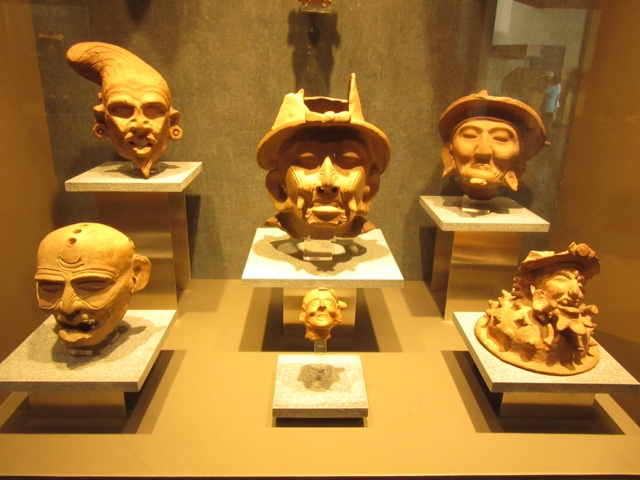 The God of water was found in Puebla in 951 AD- 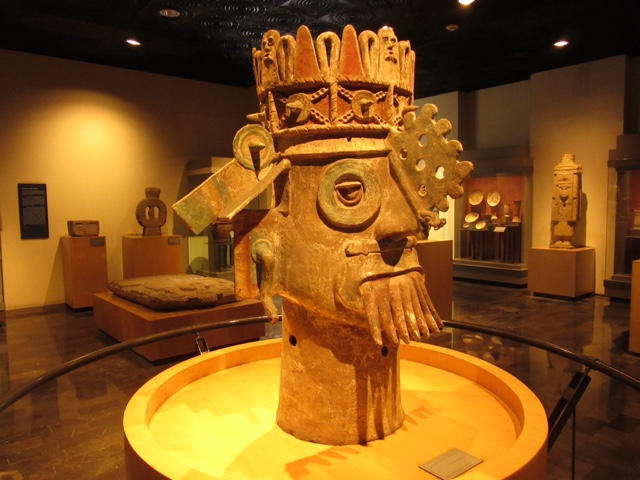 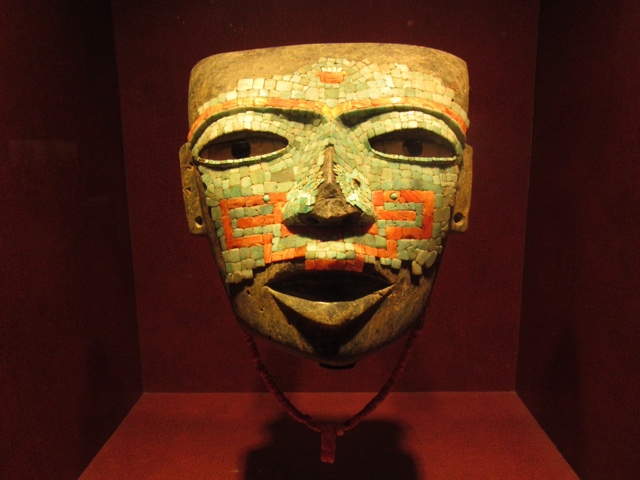 The museum is gigantic, filled with far too much to see in one day.  If I lived here, I would visit one or two rooms/visit.  I found a lot of the displays repetitive: lots of stellaes, funeral urns, masks, pots, jewelry and architectural details.  It is well worth visiting and next time I'm here, I'll visit the second floor!
The metro was much calmer on my return and the tacos el pastor were ready and delicious, especially with a bottle of mango juice- 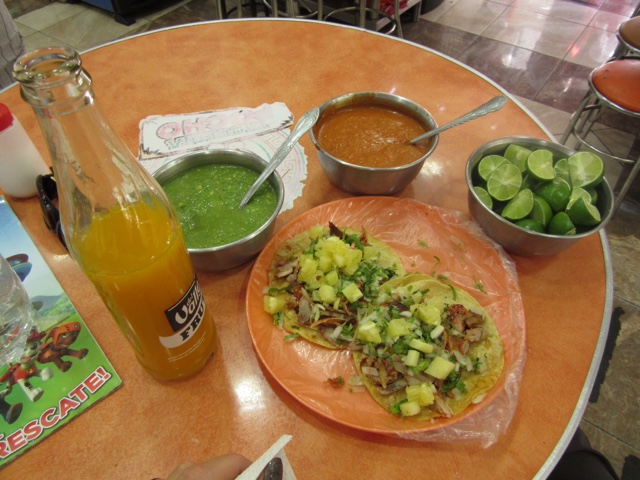 I caught a local bus  to the airport and had difficulty at check in because of my passport.  As soon as the WestJet website learned it was issued in Chile, I was thought to be Chilean and Chileans need a visa to visit Canada.  The woman trying to check me in went to her supervisor a couple of times and finally he came and clicked the right buttons so I could get my boarding pass.  We boarded our flight on time but the fuel truck ran out of fuel and took forever to come back.  We left 1h35 minutes late and so I missed my connecting flight to Saskatoon.  Luckily it was not a weather related incident so WJ paid for a hotel in Calgary and I am booked on an early flight to Saskatoon in the morning.  At least I'm not going home in a wheelchair like last year.  I thought about that a lot today and made sure I was extra careful going down all the stairs in the metro and crossing the streets. I want to go home healthy this time!  Adios Mexico!  I'll be back!
at March 21, 2018