Well the day didn't start out so well.  My shuttle was supposed to pick me up around 8 am, and I knew we had to be at a gas station along the highway by 8:45 to meet the van coming from Antigua.  I was ready plenty early and waiting, waiting, waiting.  Finally at 8:20, I used the receptionist's phone and called a number that thank goodness I had been smart enough to ask for at the travel agency when I bought my ticket.  "Hector" said he would call me back.  He did, and I was told "paciencia, paciencia". At 10 to 9, a van picked me up and just the 2 of us raced to the gas station.  There were 2 vans, one appeared to be overflowing so luckily I got in the second one and got the front seat with the driver.  He drove like a maniac and the highway was not good.  There were many potholes so he drove a lot in the left lane and slithered like a snake, a very fast snake, left, right, left, right.  It was impossible to sleep because we were being flung from one side to the next for 4 hours.  Along the way- 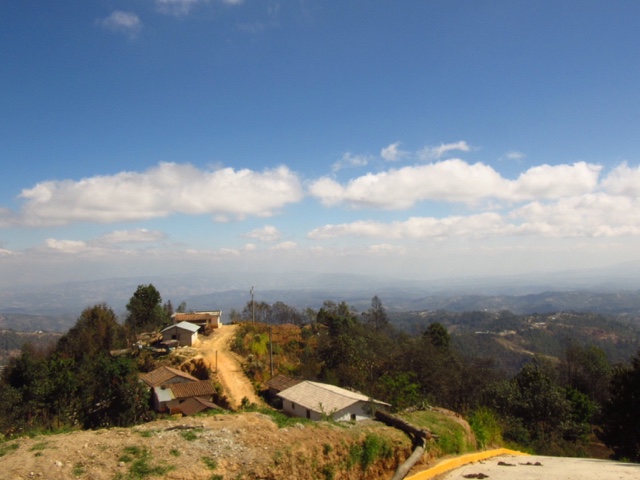 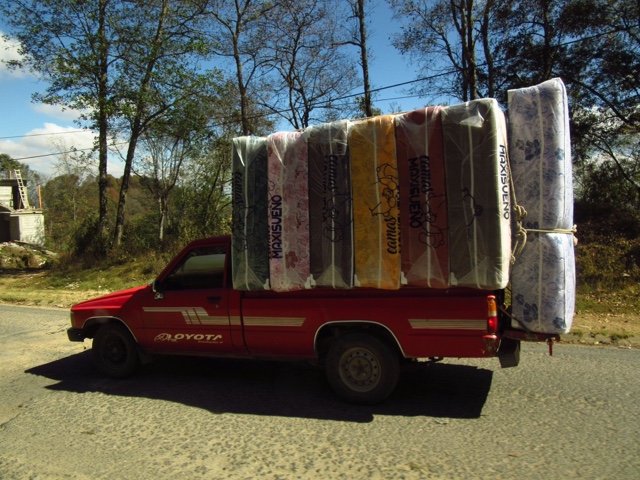 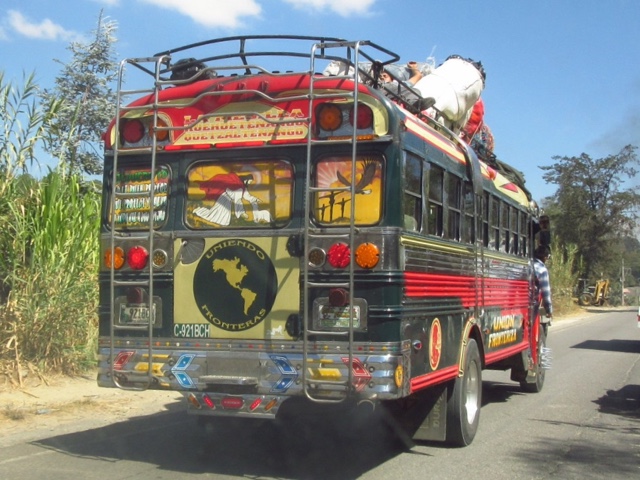 Coffee is grown in the highlands and has been picked, dried and sorted- 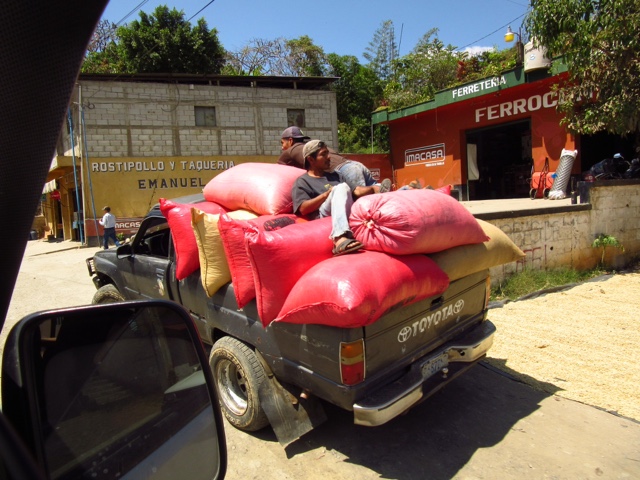 The border was really simple.  There wasn't a line, you just pushed toward the counter and one man took a few passports at a time that were processed and then he handed them back.  I stood there 5 minutes max.  Outside about 50 people were milling around.  Some were heading to Guatemala in the 2 shuttles we had just arrived in and the other half were going to San Cristobal.  I asked where I was supposed to go and I got a funny look.  Finally my driver pointed to a man so I talked with him. He told me to get in the van that was going to Guatemala.  Wrong.  So I spoke with another man and he just shook his head.  Pretty soon, the people that had been in my shuttle were walking away with another man and he told me no.  By this time, I was really wondering what was going on but there was no way I was going to be left at the border!  There was a lot of conversation between the drivers and a lot of head shaking.  I heard numbers: 15, 17 but wasn't sure how many seats there were in the vans or what kinds of vehicles they even were.  Eventually a man said "Vamos" and away we went.  It turns out there was plenty of room yet he still wasn't very friendly to me.
Mexico was instantly different:  we drove 3 hours on an excellent highway.  Homes are cement and painted nicely.  It is obviously a much richer country- 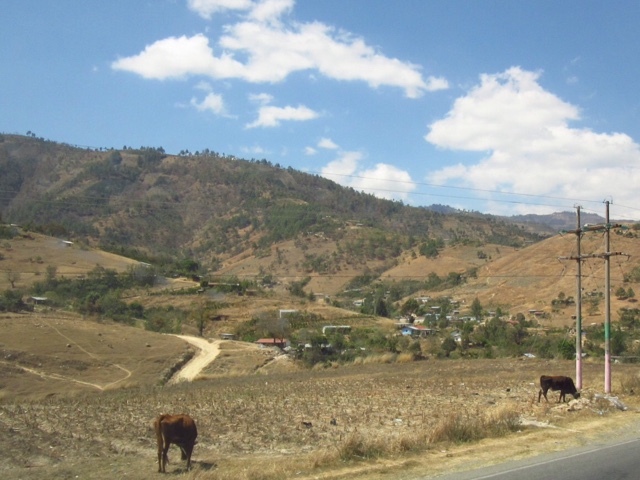 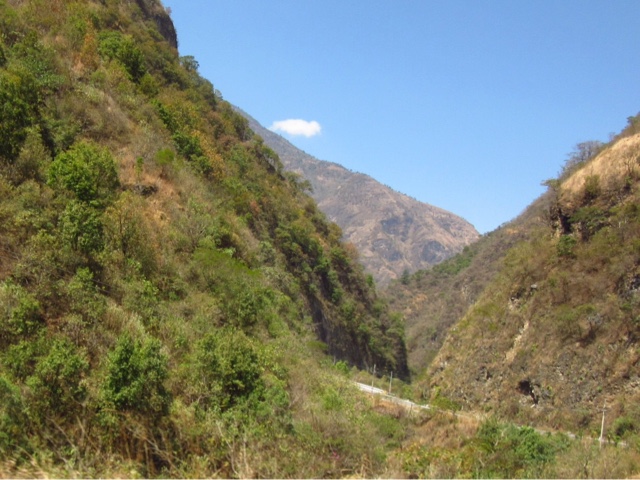 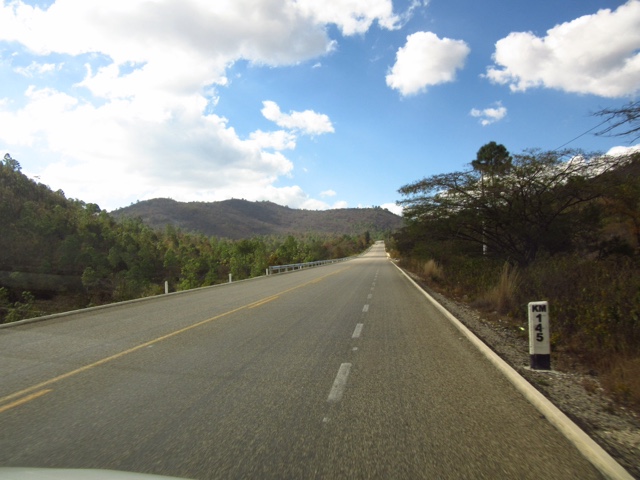 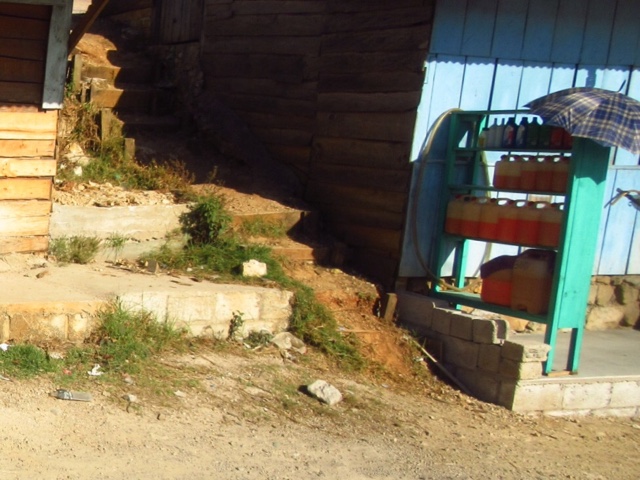 Many small towns seem to have something they're 'famous" for.  This one makes wooden toys- 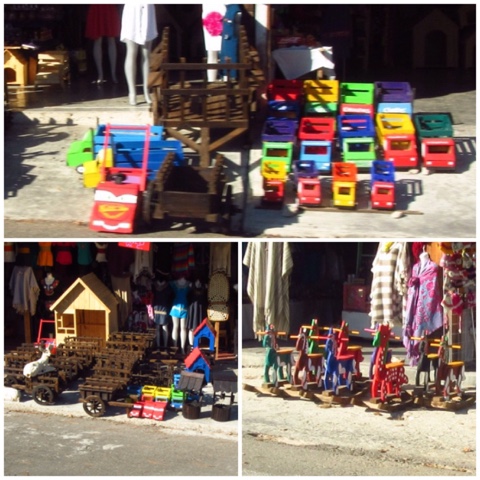 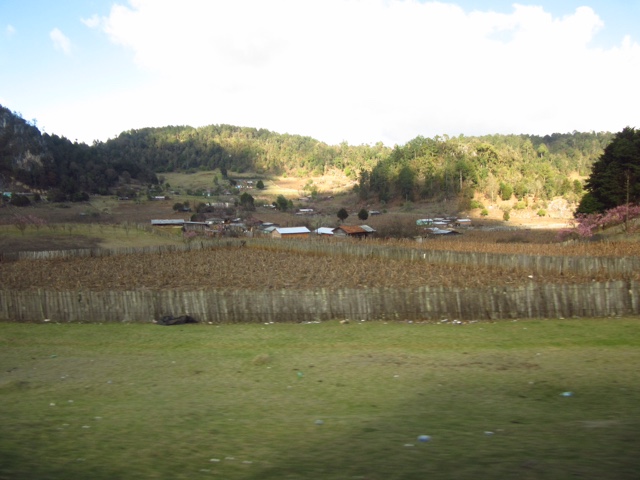 This village doesn't look so well off- 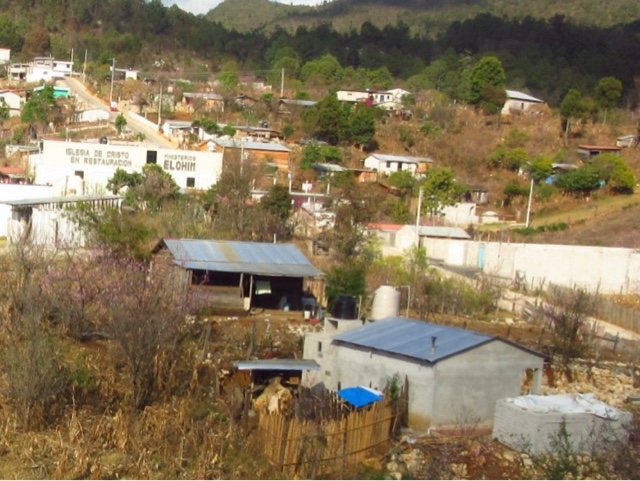 When we bought our shuttle tickets, we'd all been told it was door to door service.  Well, not with this asshole.  He pulled over in Parque Central, told us to take our garbage with us and stood beside the van while we unloaded it.  Luckily for me, my hostel was only 3 blocks away so the walk was okay.  My first room was just off the lobby, so noisy and it didn't have a window that opened.  When I came back from supper, which was a bife chorizo in an Argentinian Parilla, my bathroom floor was wet.  The sink was leaking so I asked for a new room and ended up upstairs with a king sized bed!
Supper was okay but unfortunately there was way too much marbelling in my steak - ooo, gobs of fat!  I had to send it back to be cooked a bit more because here, apparently rare means rare.  A man who had been on my shuttle to the border came in and sat down by himself so I invited him to eat with me.  He was happy to see me because everyone knew I had been left behind at the border while the others moved into Mexico.  He said he'd asked the driver what was happening as apparently I'd been forgotten this morning by my company.  It was lucky I called because 'Hector' was able to make arrangements with another shuttle company to take me.  No one wanted to because they think they won't get paid and they are probably right!  Anyway, my new friend is from Costa Rica but living in Antigua, carving Jade.  Every 90 days he has to leave Guatemala for Costa Rica, Belize or Mexico.  Guatemala, Honduras, El Salvador and Nicaragua work together as one and tourists can only stay for 90 days.  Then they have to go to an embassy to get a visa extension or leave for 48 hours.  Even though he has a family in Costa Rica, it's too expensive to go there every 3 months.  He said that a cauliflower costs $6 US and one avocado is $2 US.  He is working on his citizenship papers and then his wife and 2 kids will automatically be Guatemalans too.  It's only 3 years ago that he discovered he had a talent for carving.  Before that, he had a fumigating business.  He was wearing this $4000 US necklace that he's sold and delivering tomorrow- 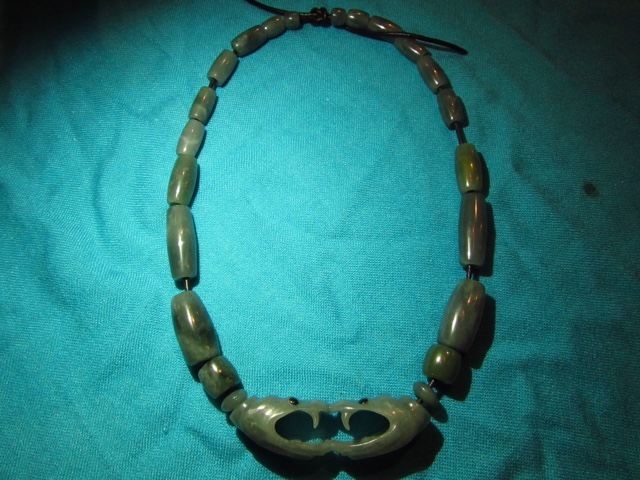 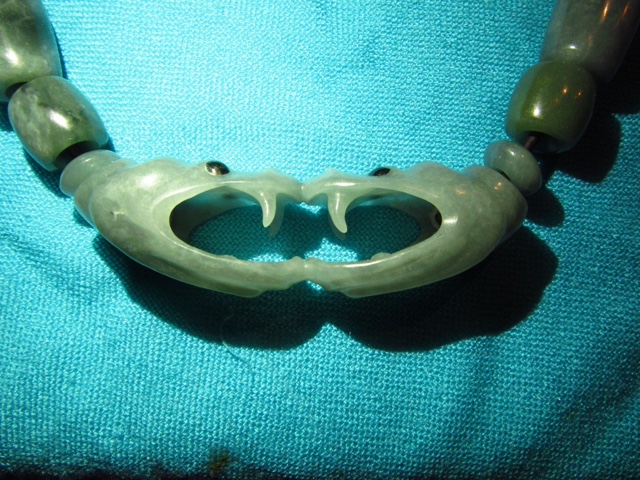 A large head he sculpted sold for $40,000 US and a 10 inch ballerina sold for $8000.  He has a workshop in Antigua where he teaches carving 3 days/week and the other 2 days he does his own carving.  Since discovering he's an artist, he's carved 283 objects and no two are alike.  He can't believe this talent he's so recently discovered.
I checked out a few tour agencies to get prices for my adventures in this part of Mexico.  I'm looking forward to exploring San Cristobal Las Casas tomorrow.
at March 02, 2018