The steps outside the Ethnological Museum represent the years of Mussolini's domination.  The Italians occupied Ethiopia from 1936-1941.  On top is the Lion of Judah, symbolizing the Ethiopian monarchy- 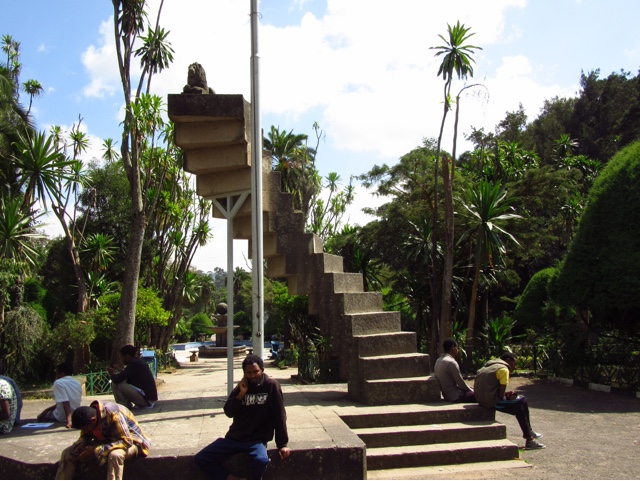 The museum contains exhibits from the various Ethiopian tribes.  It was the palace of Haile Selassie, who was crowned emperor in 1930.  The mirror of his dresser in his bedroom has a couple of bullet holes in it from the coup d'état in 1960- 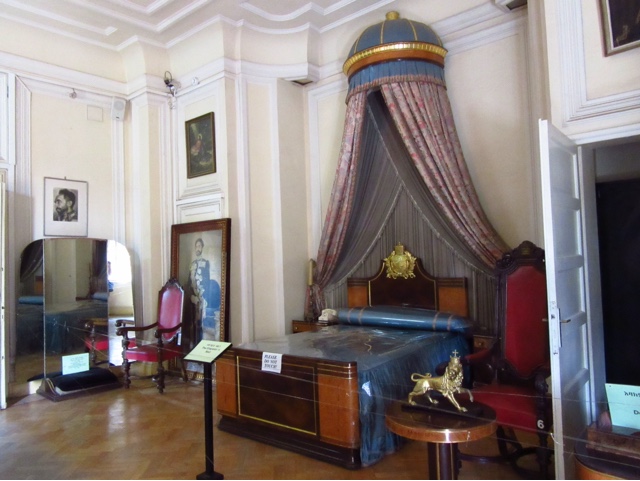 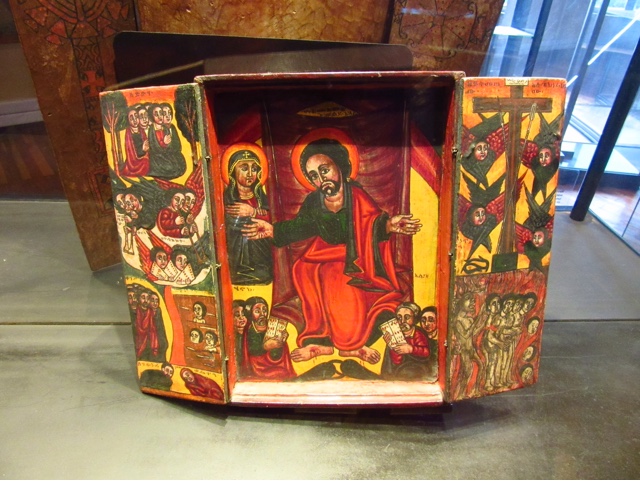 The Virgin and Child from the same era- 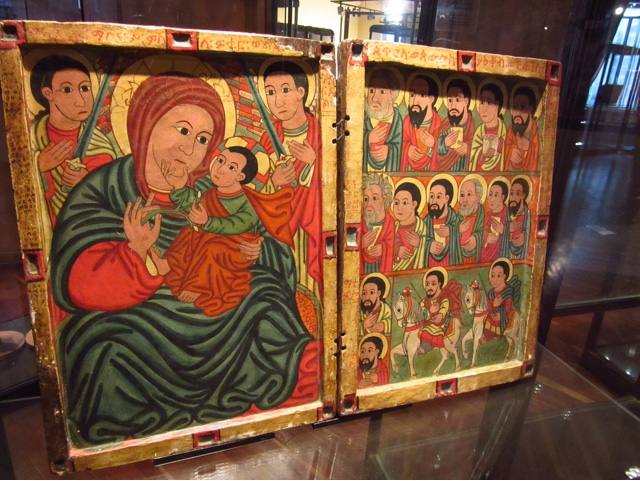 On February 19, 1937, several thousand Ethiopians were killed in retaliation for grenades thrown at
Viceroy Graziani.  The monument is called Yekatit 12 (February 19)- 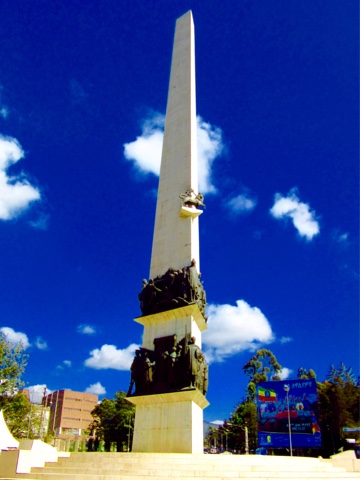 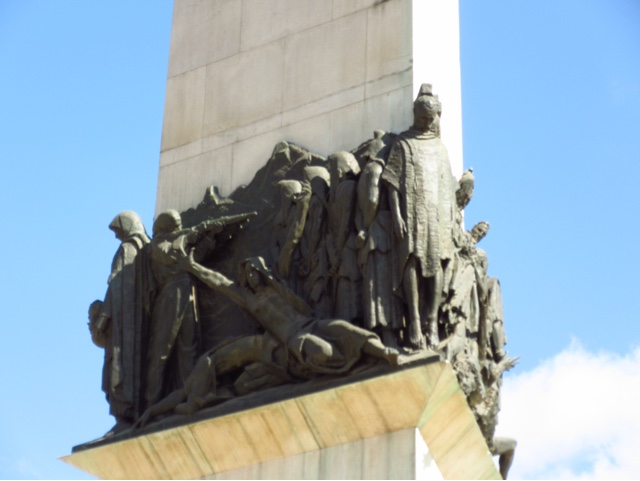 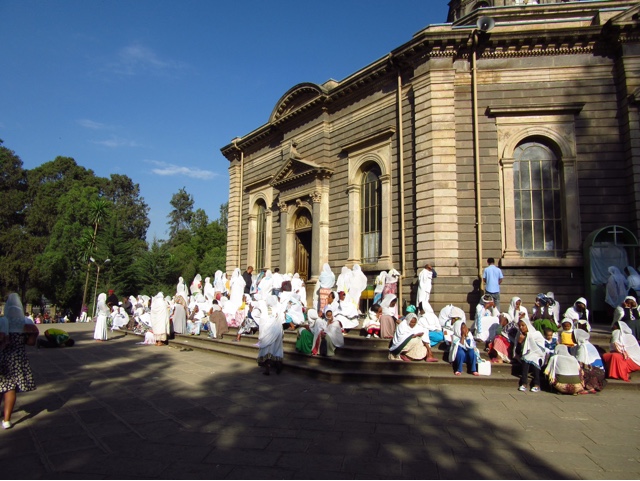 and was commissioned by Emperor Menelik II to commemorate his defeat of the Italians in 1896.  St. George is the patron saint of Ethiopia. Today was Sunday, so there were a lot of women praying.
Inside, the walls of the Holy of Holies, the center and most important part of the church, are covered in paintings, some by Afewerk Tekle- 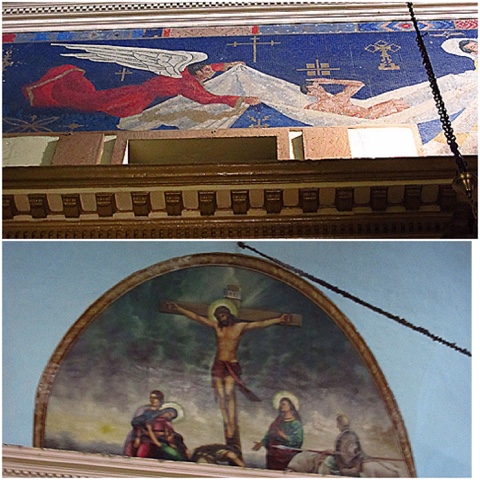 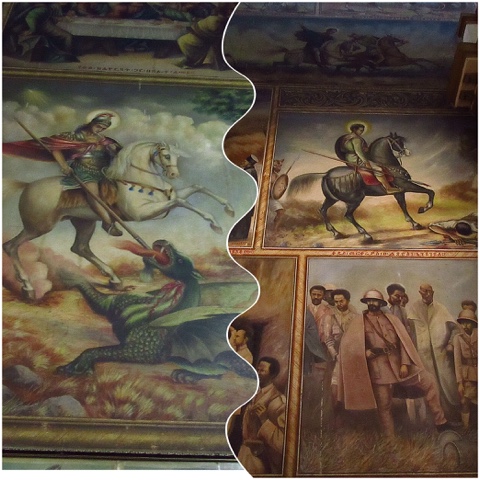 The Red Terror (1974-1991) Martyrs Memorial Museum remembers the defeat of Haile Selassie and the terror of Ethiopian life during Mengistu's Derg (communist) regime which began December  20,1974.  Land, banks, factories and businesses were nationalized.  Few were successful.  Mengistu declared the EPRP (Ethiopian People's Revolutionary Party), the opposition, the enemy of the state and he threw a bottle filled with red liquid, symbolizing blood, in front of a crowd- 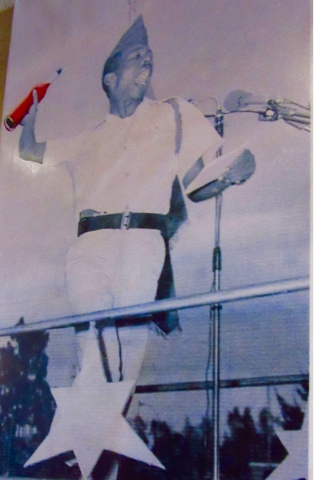 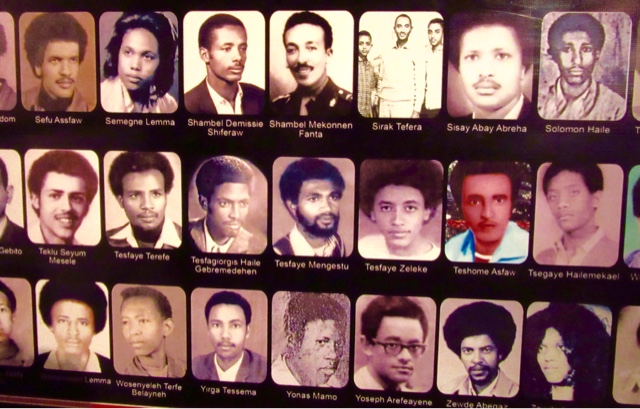 There are cases filled with ribs- 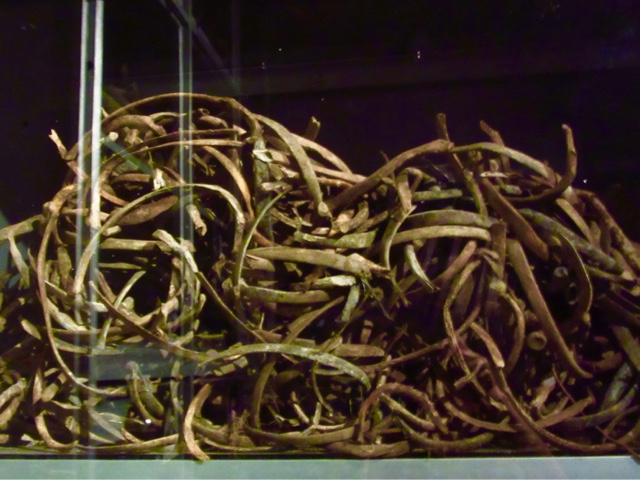 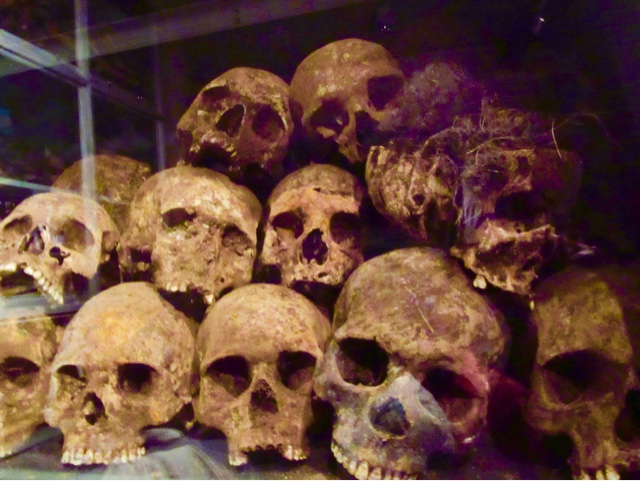 from 725 mass graves.
Methods of torture included scrubbing the body with rough pieces of wood, pulling out fingernails and toenails, stretching nipples and genitals, inserting foreign objects into sex organs, drowning in hot oil, standing on hot iron plates, and hanging from the knees for a long period of time- 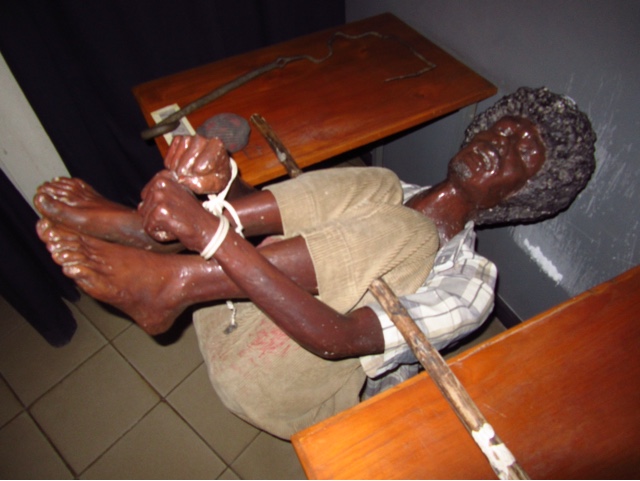 Door to door searches occurred.  We were a bit nervous when two men came to our bush camp the other night with rifles.  Imagine living through this- 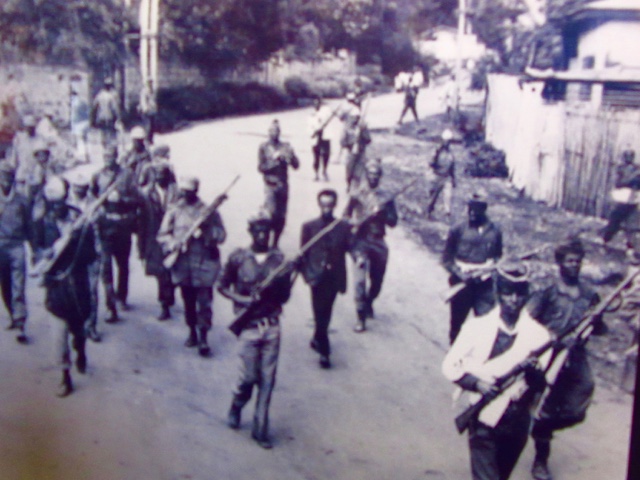 There's a huge red star on top and a golden hammer and sickle on the bottom.
The National Museum was amazing!  The cranium of a ugandox - a buffalo ancestor dates between 3.26 and 3.22 million years ago (Ma).  How is that even possible? 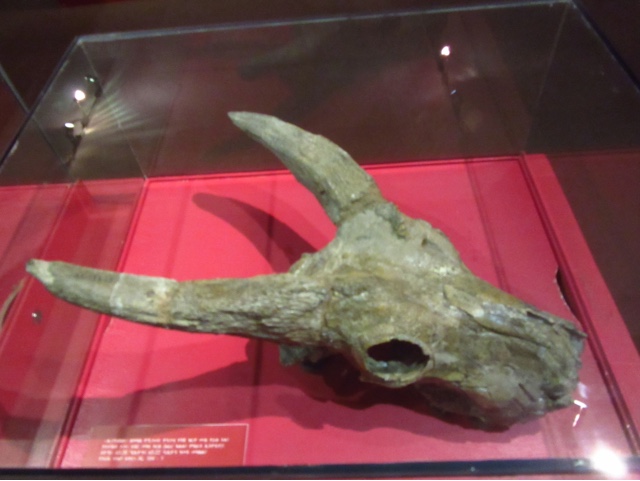 The extinct elephant relative, the Deinotherium, dates from 3.42-2.94 Ma- 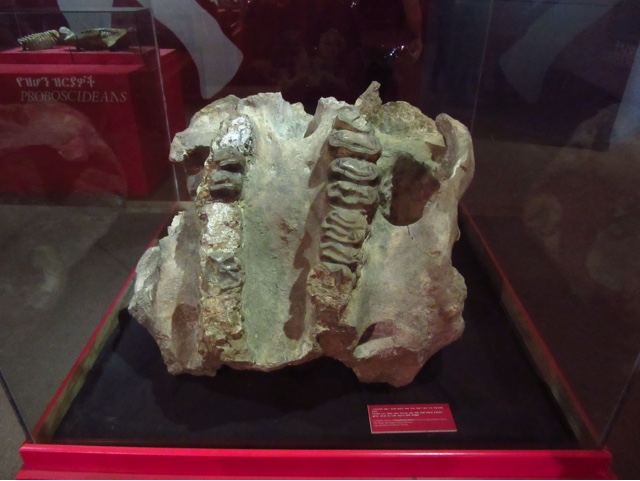 My long lost cousin Lucy!  She was discovered in 1974 and was 105 cm tall.  She belongs to the Australopithecus Afarensis from 3.2 Ma- 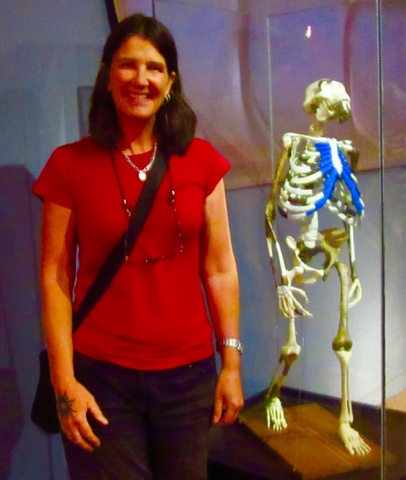 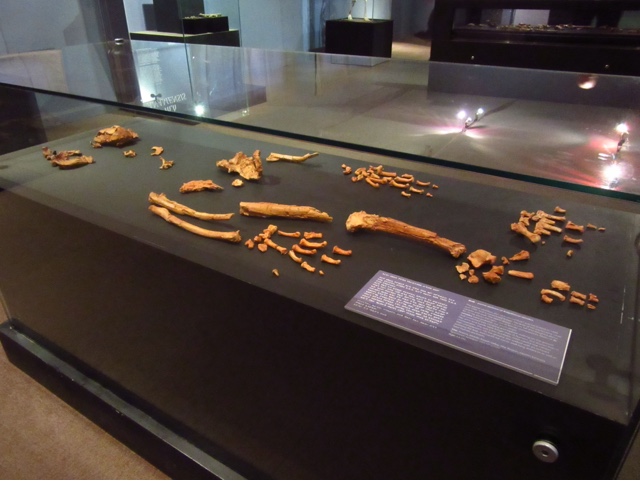 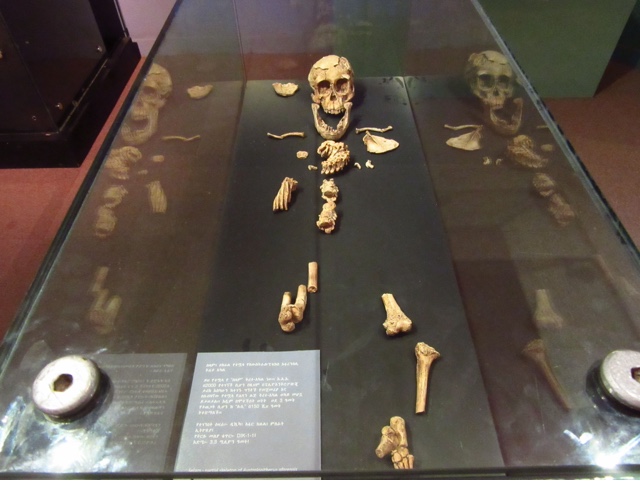 Homo sapiens originated  in Africa 200,000 years ago.  This skull has a high and domed forehead, a discontinuous brow ridge, a large and tall face as well as a distinct chin- 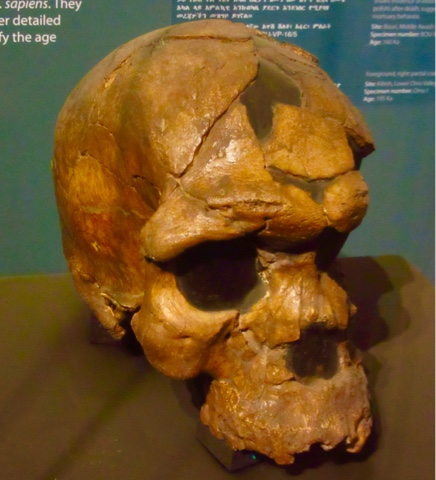 Other exhibits include African Heritage, painted by Afewerk Tekle in 1967- 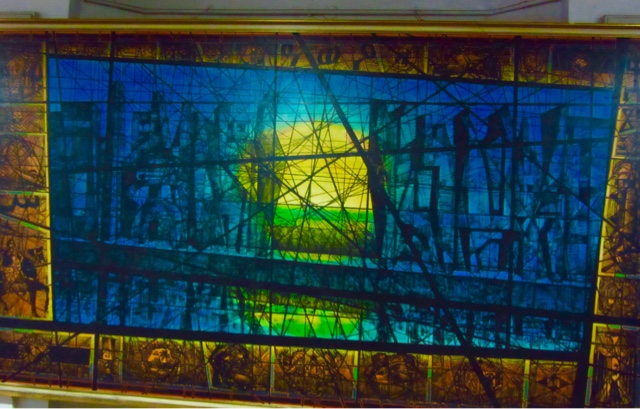 Today was huge.   I'm looking forward to visiting the Merkato tomorrow, apparently the largest in all of Africa!
at December 06, 2015