Lalibela is known for its 13 Orthodox rock churches carved  out of the earth, dating back to the 12th and 13th centuries.   Apparently they were created in 23 years!  Hard to believe, but not if you know that real men worked on them during the day and at night, a celestial crew carried on!  Lalibella is the "new Jerusalem".  A pilgrimage to far away Jerusalem was out of the question so a second one was created here.  Most of the churches have three parts- the front is the Holiest of Holies  where the priest does his thing, the second part is the nave for communion and the third part is for chanting.
The Bet Medhane Alem (House of the Savior of the World) is the largest rock-hewn church in the world.  There are 34 columns on the exterior and the window designs show Aksum as well as Greek influence- 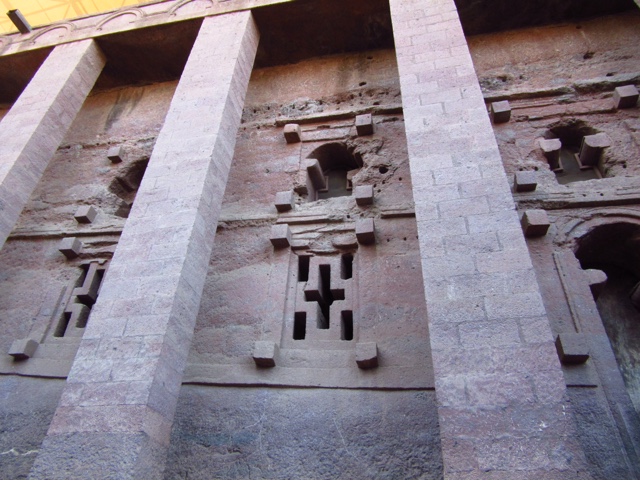 The three tombs of Abraham, Isaac and Jacob are inside- 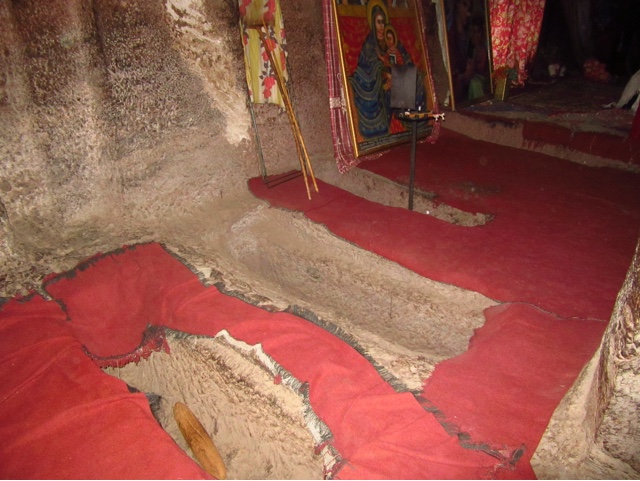 The top three windows in Bet Maryam (Virgin Mary) represent the Holy Trinity while the next row of three, below the cross, are for Jesus and the two sinners who were all crucified together.  The bottom left window is for the criminal who went to hell and the bottom right window has a window above it representing the sinner who made it to heaven after repenting for his sins- 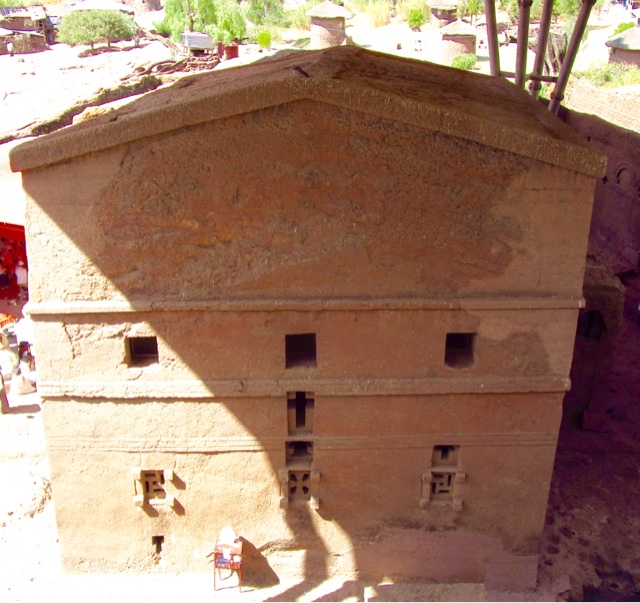 Carvings on the pillars and ceiling- 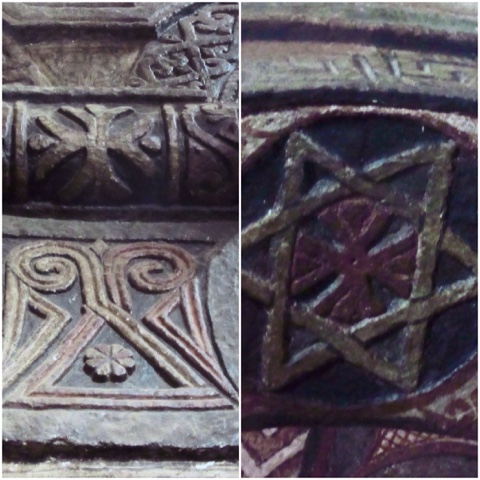 Bet Golgotha is the only church I couldn't enter because women aren't allowed.  There are 12 carved Apostles in the niches in the walls- 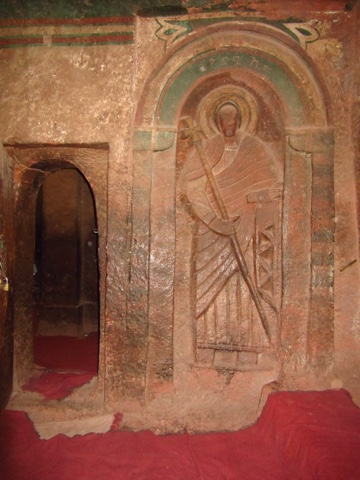 The symbolic tomb of Adam and Eve- 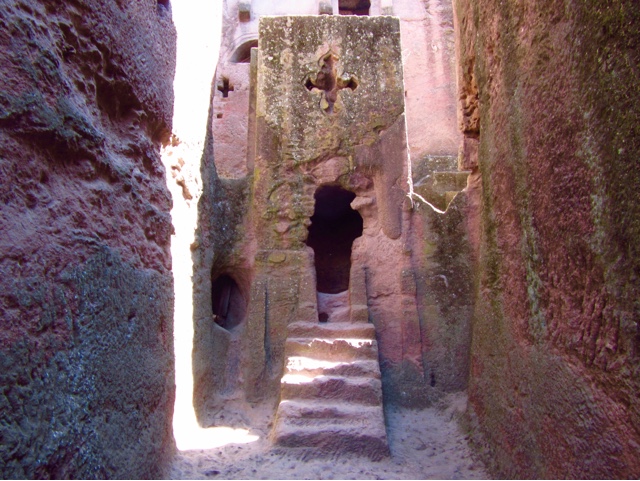 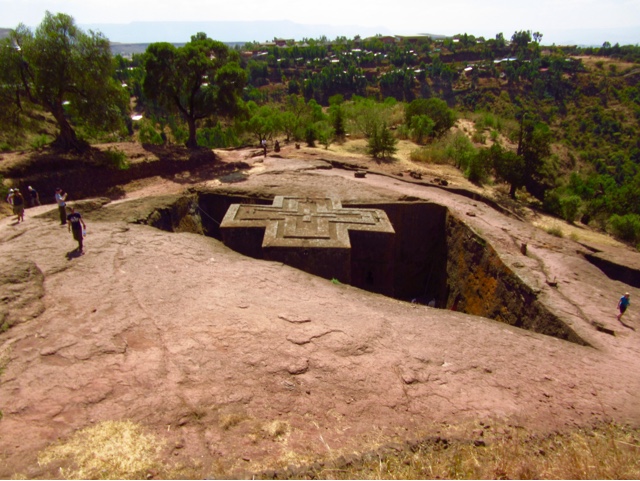 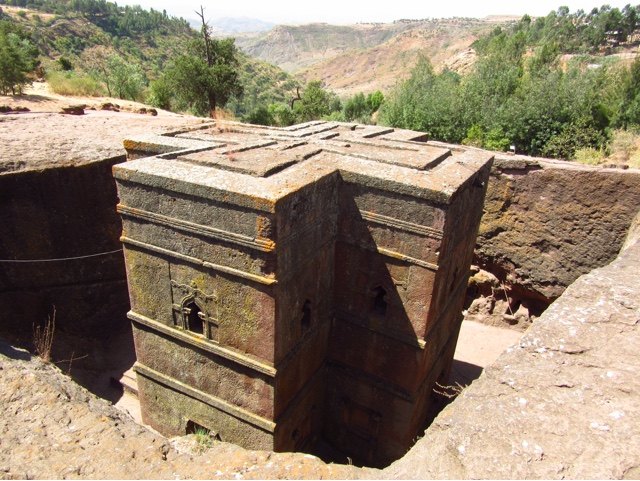 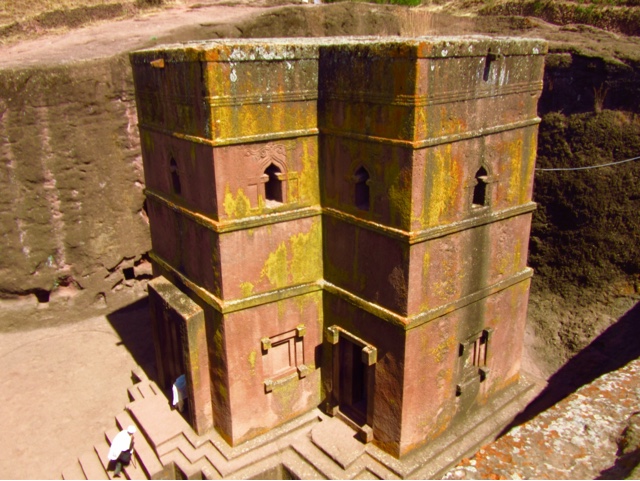 Papyrus is grown for worshippers to wear around their heads, mimicking the crown of thorns Jesus wore- 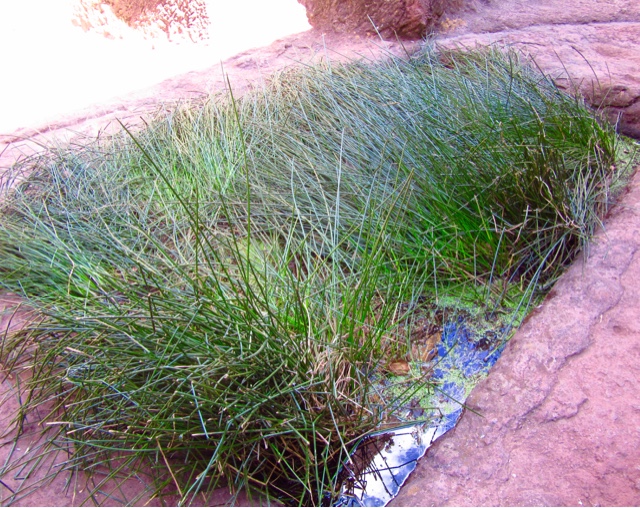 can only be accessed via tunnels and trenches- 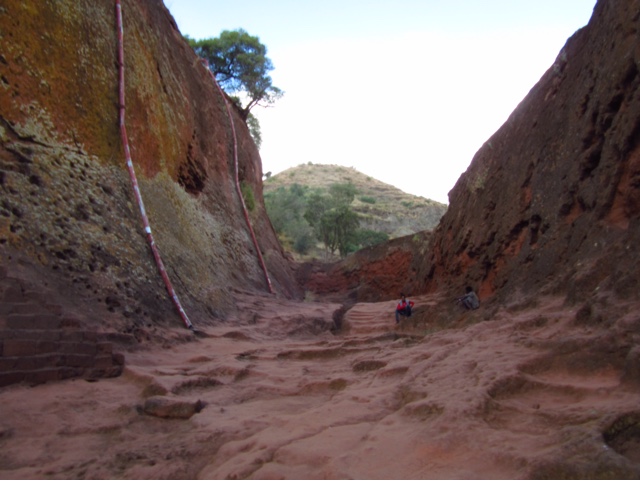 The Three Wise Men, from the 15th century, are a frescoe- 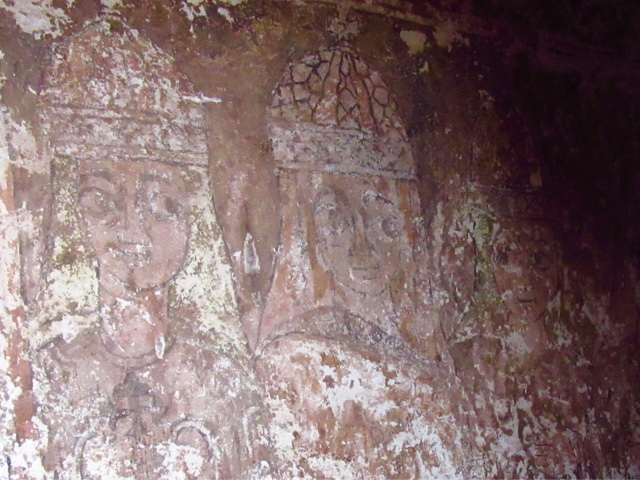 My favorite was the Petra of Africa - Bet Abba Libanos.  It's hypogeous - only the roof and floor are attached to the strata.  Legend says that King Lalibela's wife built it in one single night- 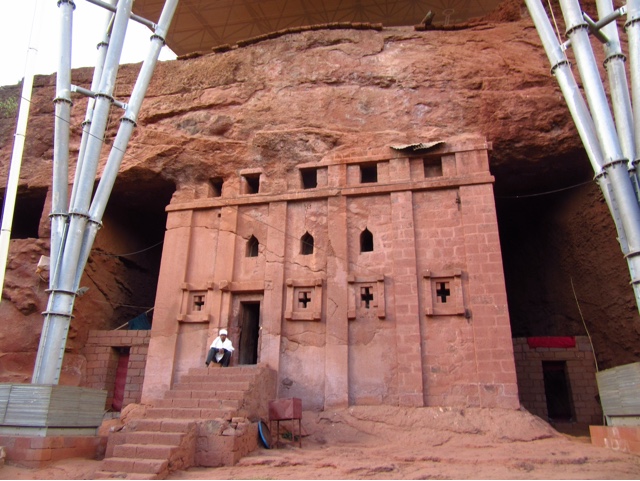 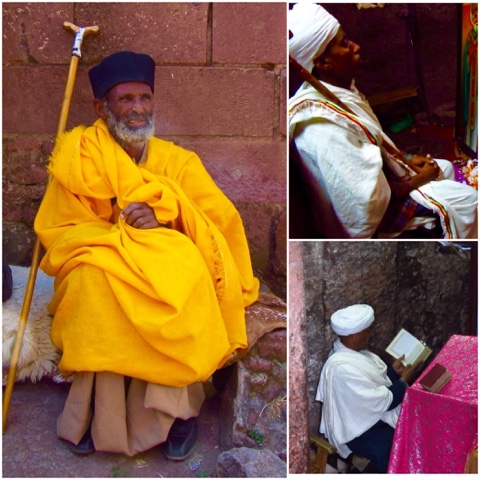 Today was St. Mary's Day so there was a big celebration with lots of drumming, chanting and singing- 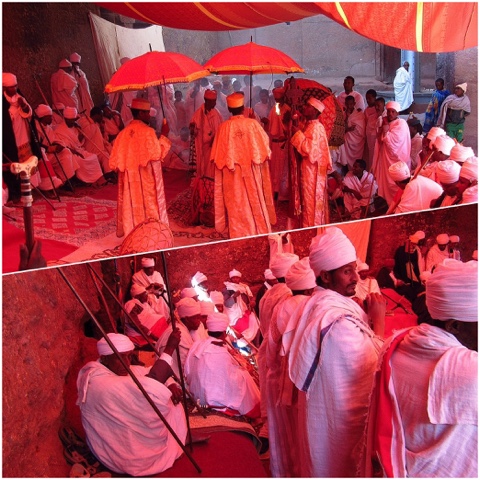 The church area is now a world heritage site.  Three years ago numerous residents were moved from their homes to modern places with power and even running water.  They used to live in homes like this where the main floor housed the kitchen and the animals - donkeys, goats, sheep, and the top floor was the bedroom.  Typically a family of 5 lived here- 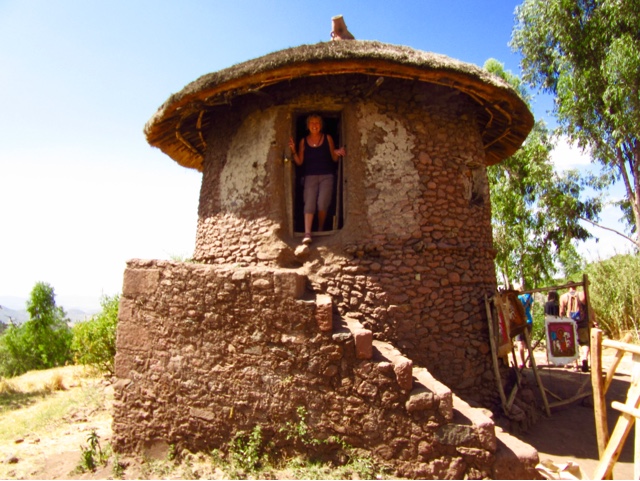 Paintings are done on goat skin- 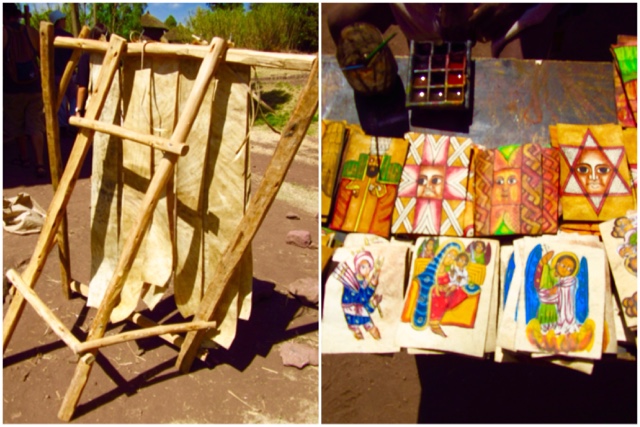 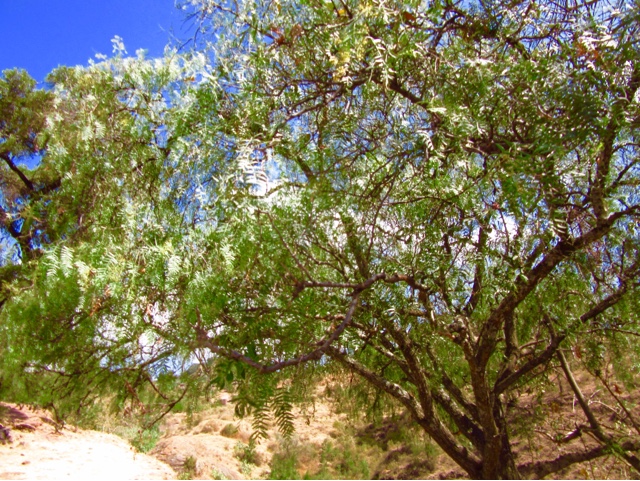 Huge poinsettias grow around our hotel- 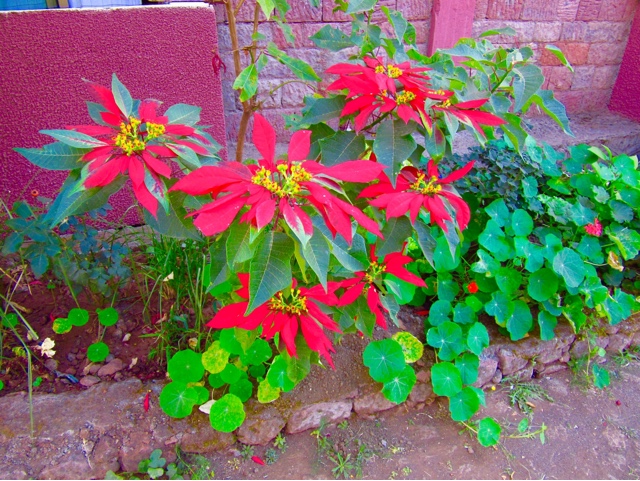 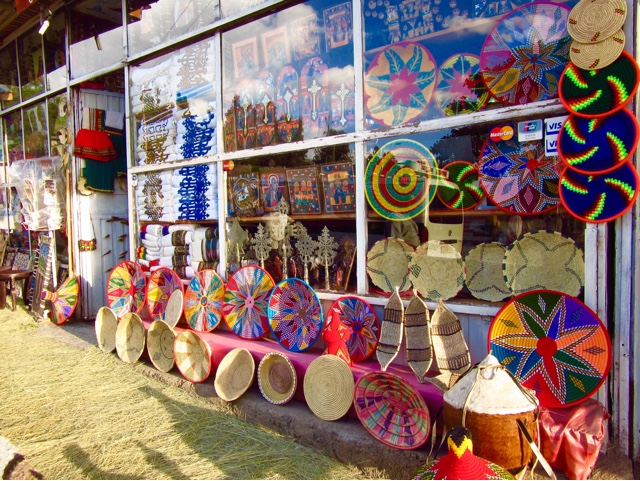 and filled with masks and cross carvings- 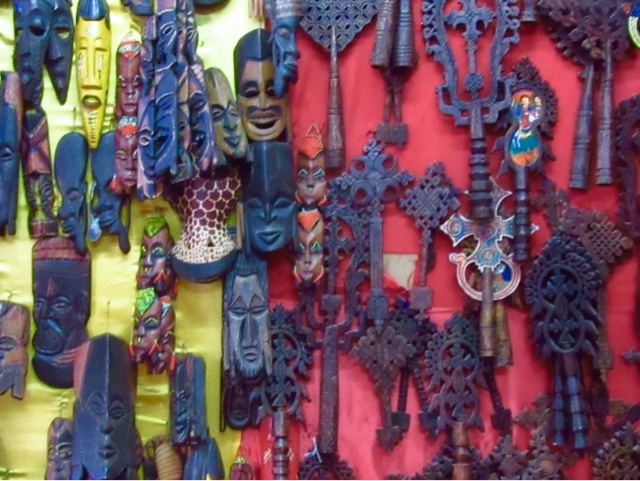 Lalibella is a magical place.  It's the first time I've seen such devotion of Christians. Something missing though was the abundance of offerings - no money boxes or flowers or candles were burning.  It is hard to believe these huge buildings could have been carved out of solid rock.
Tomorrow it's a long drive to Bahir Dar.
at December 01, 2015