Happy Birthday to my Mom!  She's 78 today!
16  distinct  tribes live in the Omo Valley.  Approximately 350  Hamer people live in the village of Dambyta.  Their homes are made of Cordoafrican wood because termites won't destroy it.  Some of these homes are 80+ years old- 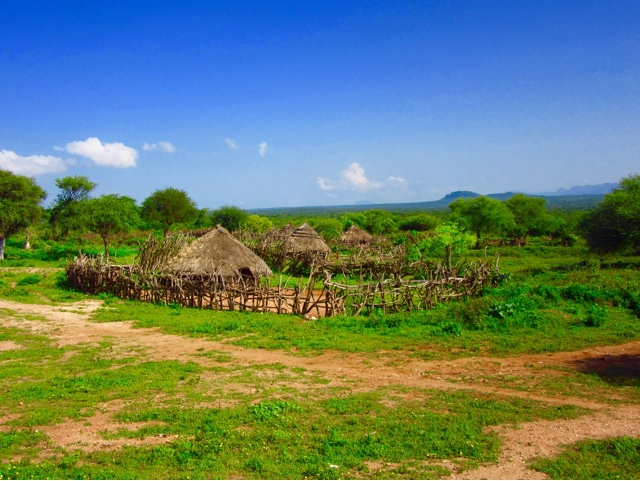 We were invited inside for coffee.  One of the chief's wives is preparing it- 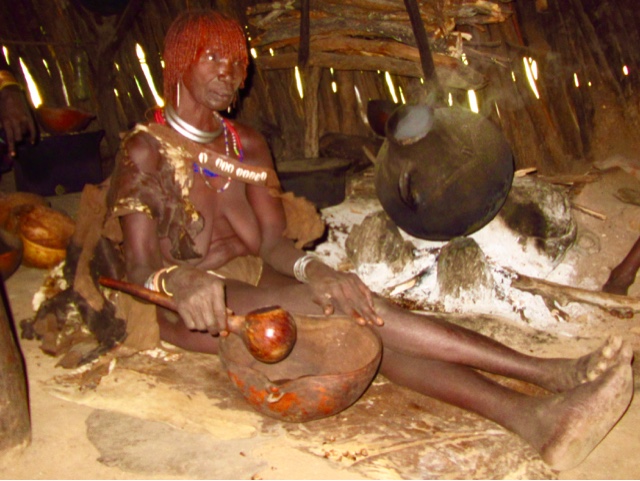 I didn't taste it but apparently it was more like tea.  It was made from the husk of the bean.  Numerous gourds used as cups were passed around- 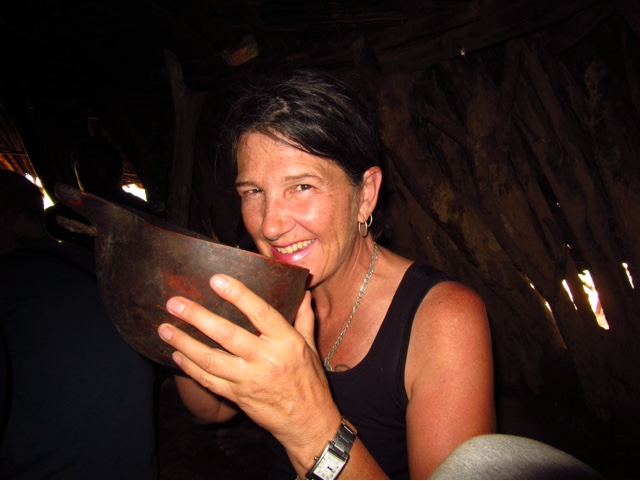 Sorghum is their lifeline.  It's ground on a stone- 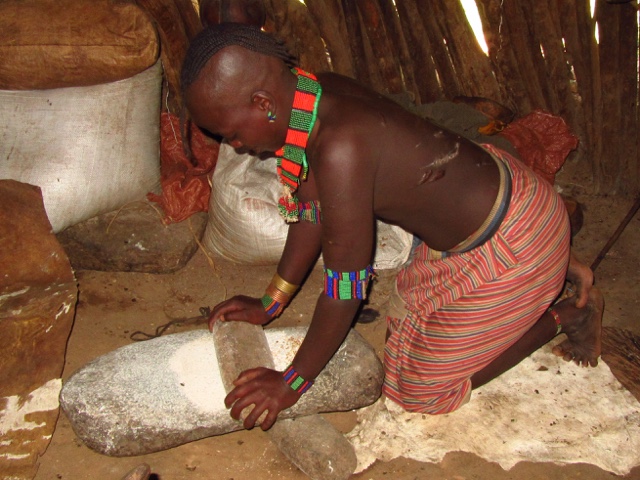 and used to make Balasha bread- 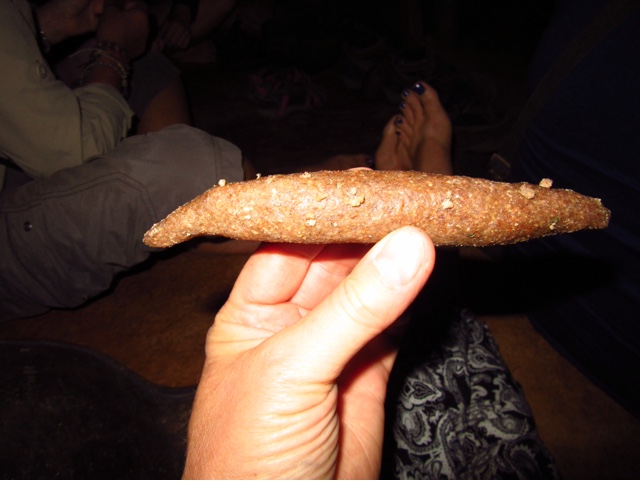 that tasted really good - heavy and grainy.  They eat meat for special occasions, maybe twice a month and never cattle because they are used for the dowry.  40-50 cows are given to the woman's family. They also drink milk and animal blood and make cheese.  No vegetables!  They are thin and their teeth are nice, at least the ones they still have.  They remove teeth so they can spit!
The chief and one of his wives- 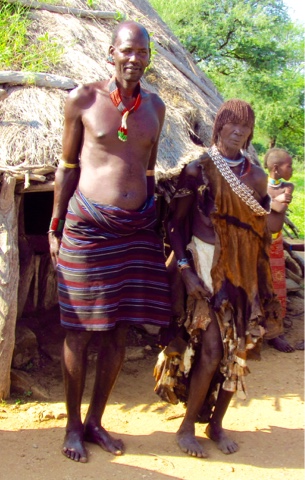 posed outside the hut where 12 of them live.  Notice his black and red necklace, typical of the Hamar tribe.  The woman is wearing a shell necklace and skin clothing.
The two copper rings around her neck mean she is not his first wife, but second or maybe even third or fourth- 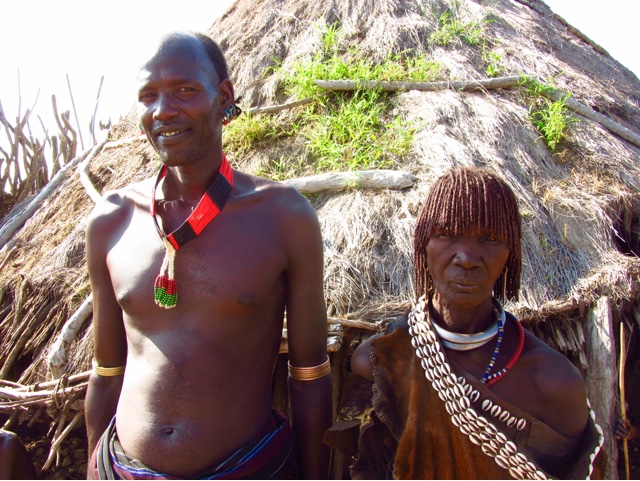 These two young women are not married because their breasts aren't covered.  Notice the scars on  the  woman on the left- 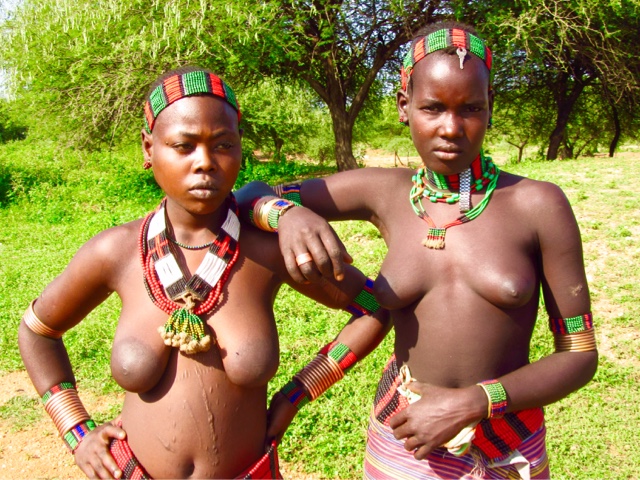 Another wife with numerous children, not necessarily her's.  One woman told us she has 10- 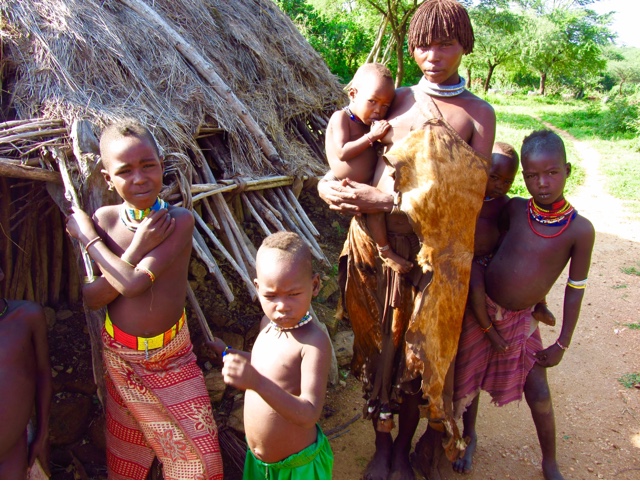 Clay and butter are used in hair decoration.  Notice the child nursing- 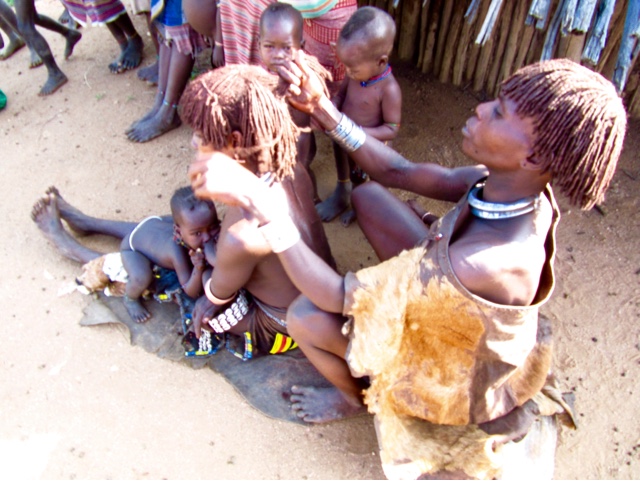 Women ask to be whipped at bull jumping ceremonies to support their male kin who must run across 20+ bulls at least three times to prove his manhood so he can get married, own cattle and have children.  This scar is particularly nasty- 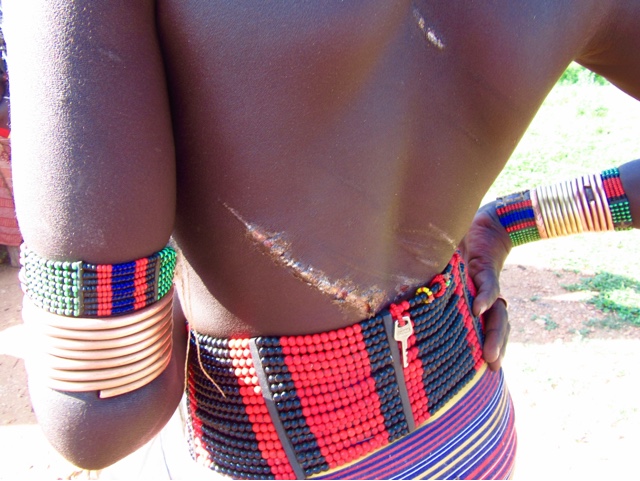 The women are in charge of the home, crops and yards while the men look after  the cattle and the children tend the goats- 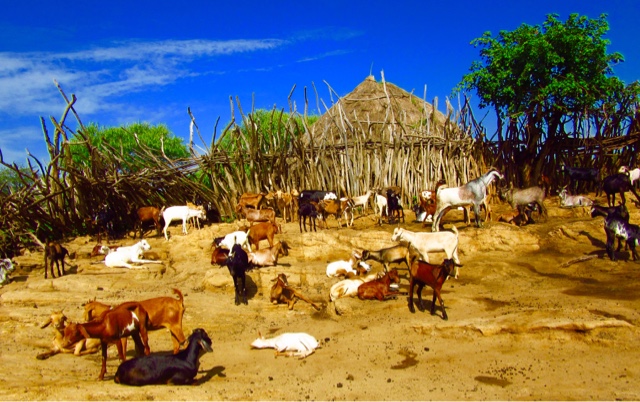 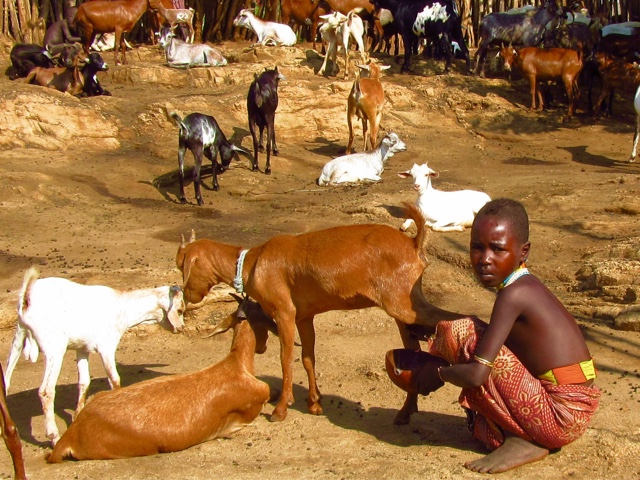 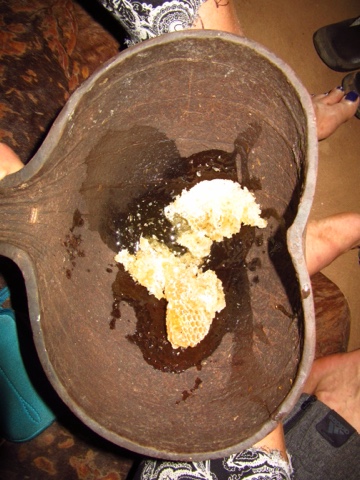 wax and all!
We ran into these two again- 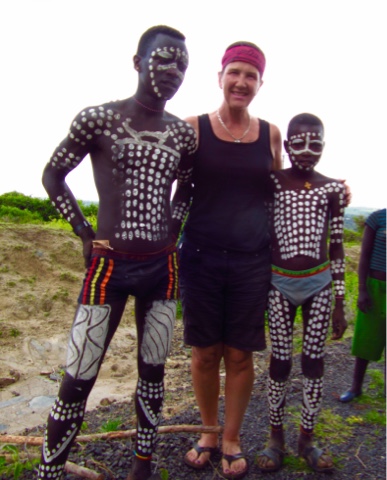 Our next stop was at a market at Komhoyal where the Hamar and Banna tribes meet weekly.  It's a courting place, where young teenagers look for a spouse- 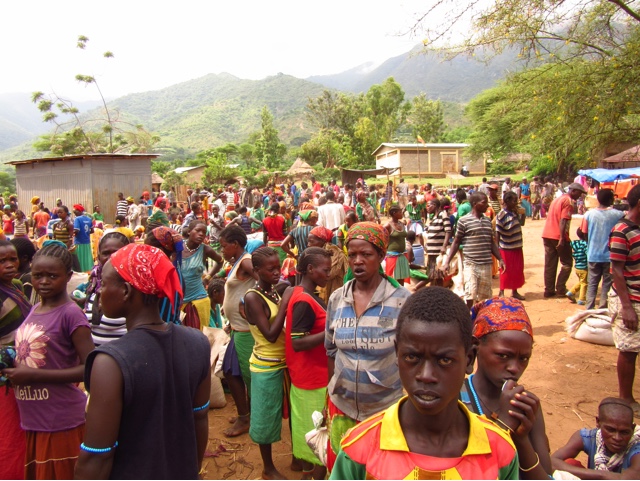 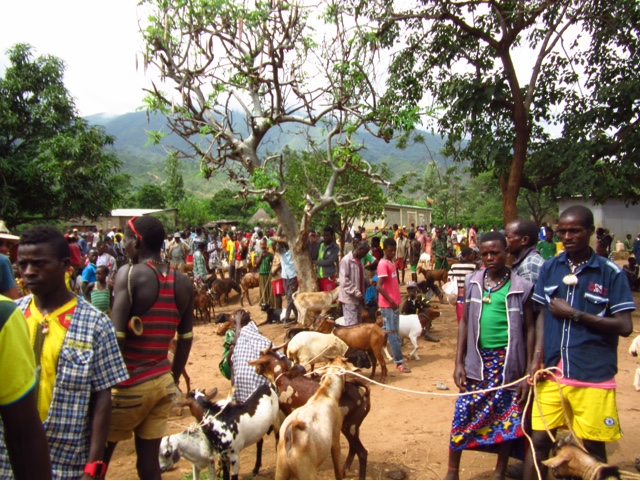 and household items are available- 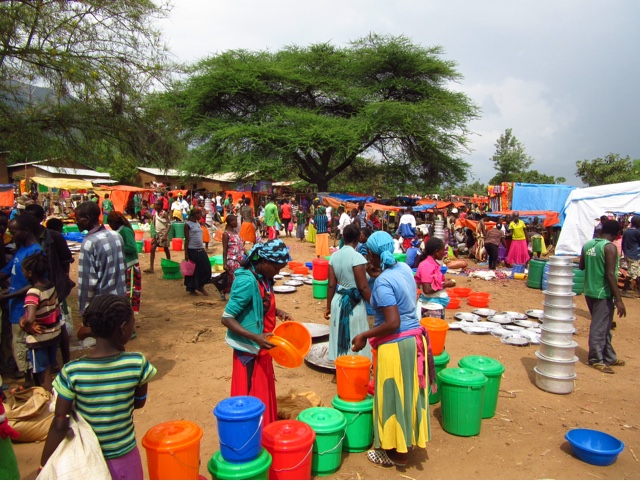 Honey is also for sale- 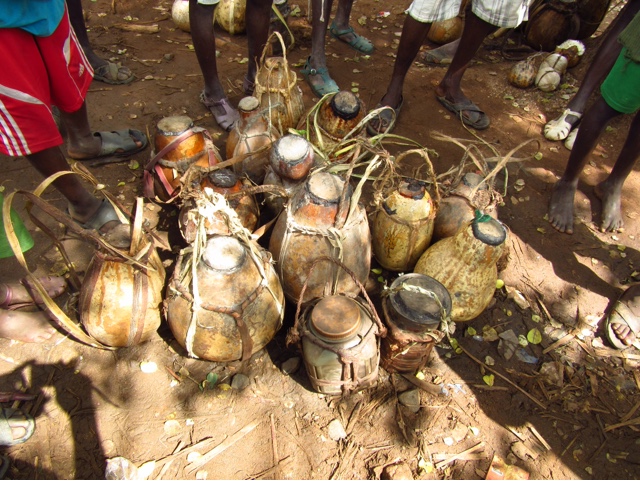 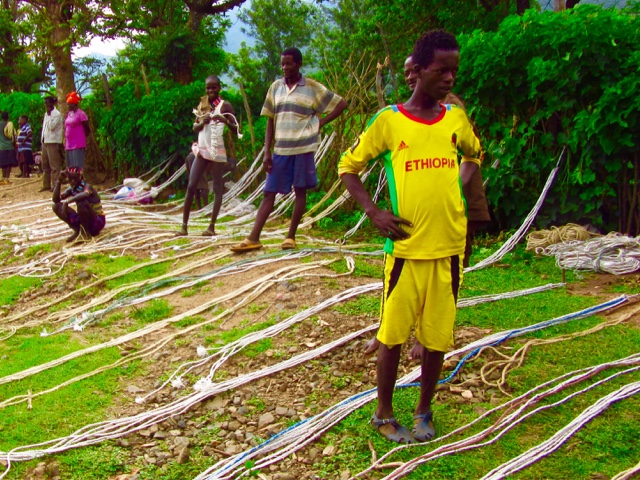 We were the main attraction.  Mick is showing  the kids pictures of themselves- 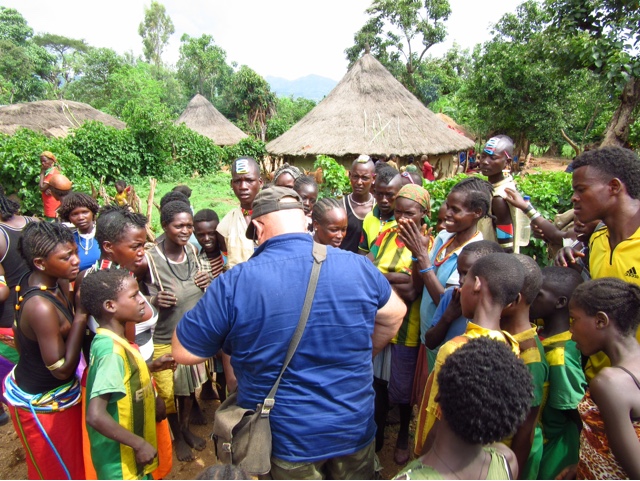 Dave and Emilia are surveying the situation- 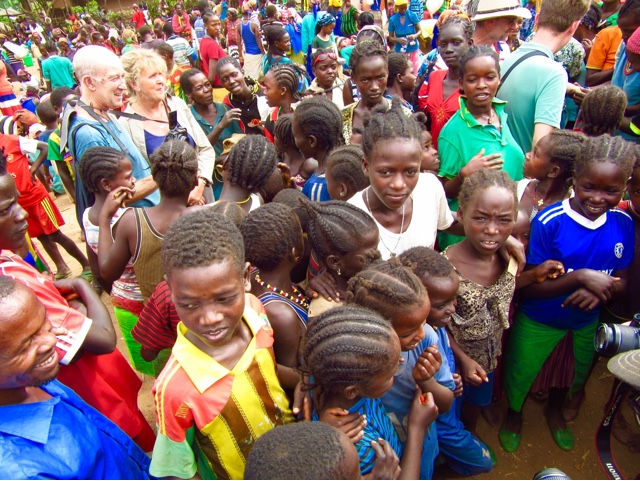 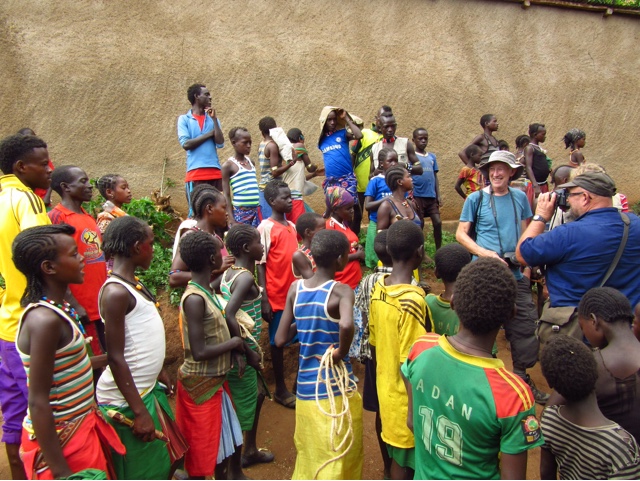 Tattooing is popular with the Malle tribe.  One woman had striped tattooed gums to match the lines on her face!  They were very interested in my tattoos.  They touched them constantly and made all kinds of faces! 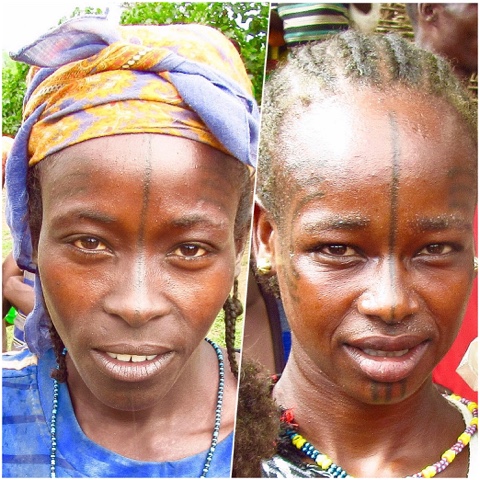 Barrettes are used to attract girls- 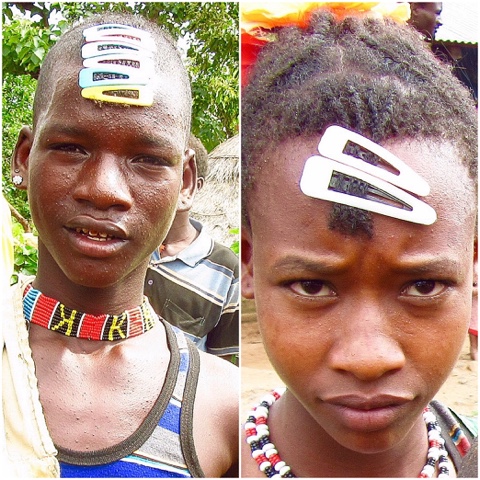 Beadwork and necklaces also differ, depending on the tribe- 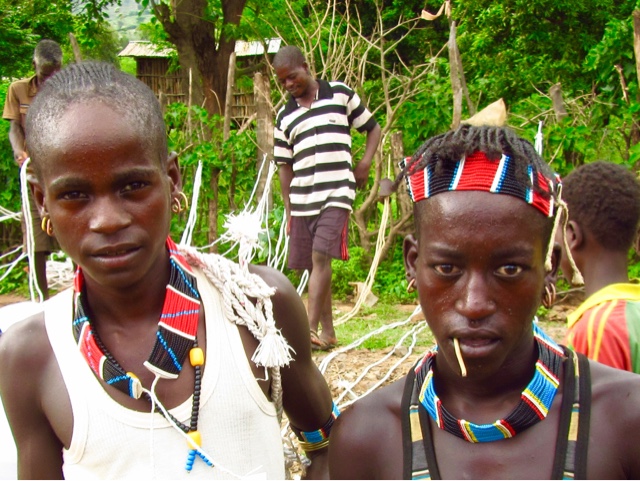 It was a great day and I'm looking forward to the Mursi tribe tomorrow!
at December 16, 2015