I spent a couple of hours at my favorite place in Antigua- on the balcony just outside my windows at my homestay.  I love sitting in the sun, looking at the 3 volcanos while the sun sets.  Tonight was also even more special because finally- 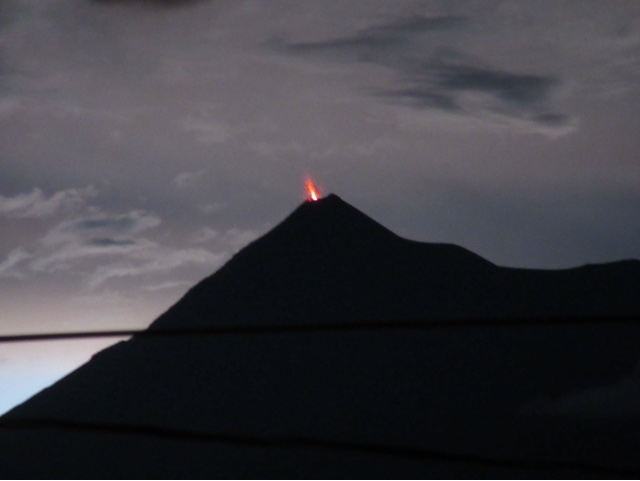 Everytime Fuego rumbles, I look to see if there is anything more than just smoke and this afternoon there was!
I have to clarify something.  While telling Sheny about my trip to Chichi, she looked at me in horror when I told her about my visit to- 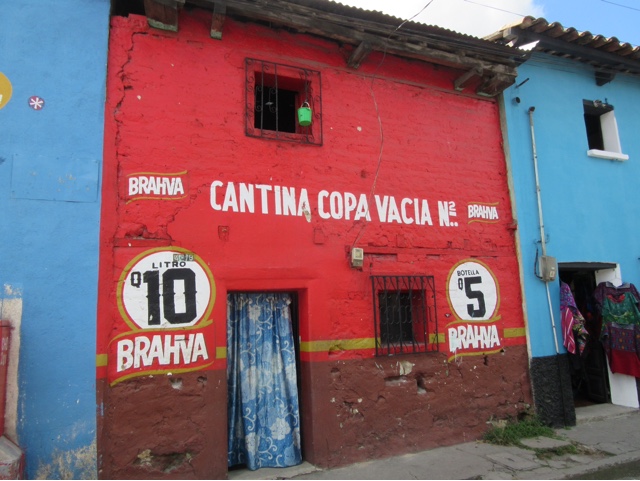 This house of prostitution!  There are 3 very bold and tell tale signs what this establishment truly is.  First, it's red!  That means prostitution.  Second, it not only has a cloth curtain at the door, that curtain is blue.  That means prostitution.  Third, it's a cantina.  Not a cantina-restaurant, just a cantina.  That means prostitution.  I walked in looking for a cheap beer because in the fancy hotel across the street, they were charging too much.  A lone woman was working behind the bar, playing on her phone.  She served me, told me she lived upstairs and a while later, a family came in.  They were her bosses.  I never saw anyone else there - Sheny said there would have been girls upstairs.  A few men put their heads in the door, but I mustn't have been good for business because none came in.  How crazy is that????
During class today, Sheny and I went to the Centro Cultural Azotea.  I rode behind her on her scooter, without a helmet.  That was so fun and reminded me how I miss my bike and how little I actually rode it this summer.  I'll ride it more next summer, I promise!
A music museum, a coffee museum and plantation as well as beautiful gardens are found here.
Various Maya instruments include a tortoise shell and antler.  The antler is tapped on the shell to make music- 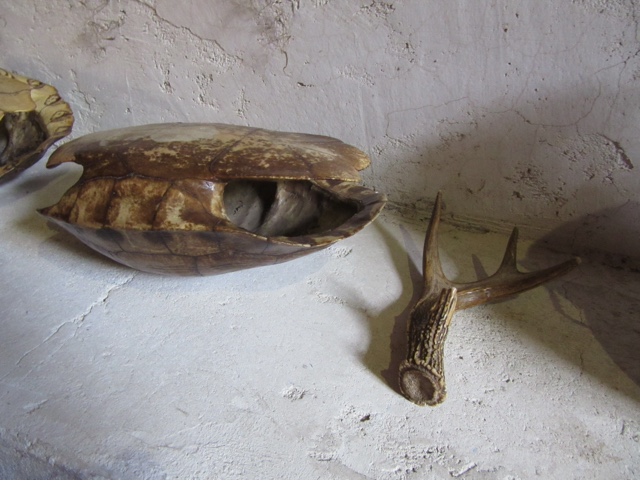 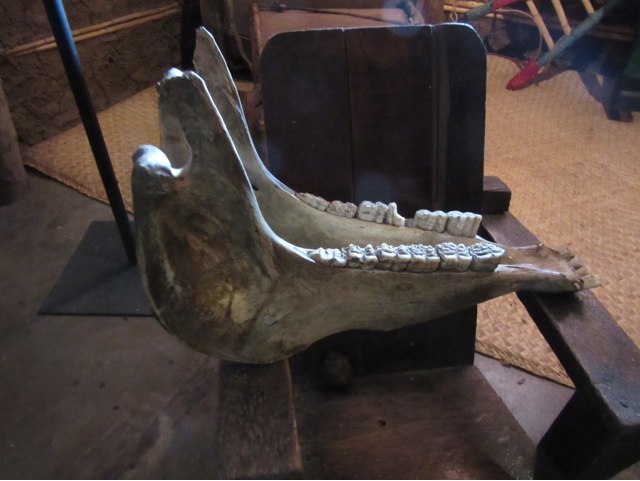 The tun is a wooden box made from Hormigo wood.  It has slits forming the letter 'H' and makes 3
distinct notes.  It's played with a rubber mallet- 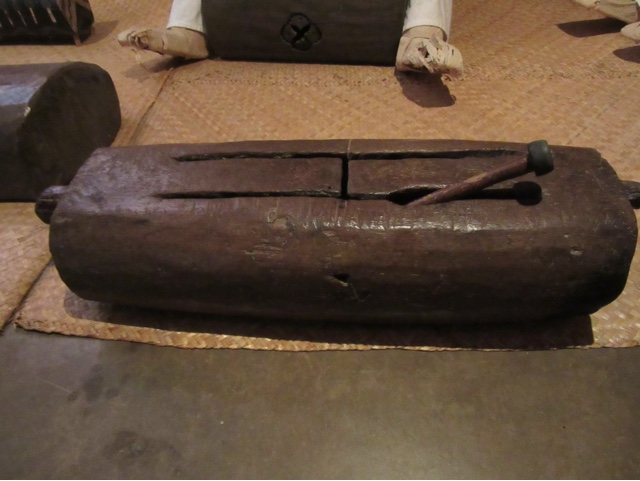 The xylophone, or marimba's keys, have tuned resonators below each key made from gourds with beeswax on the base and pig intestine skin covering the opening.  This material is a sound modifier which causes vibrating and buzzing when a key is struck- 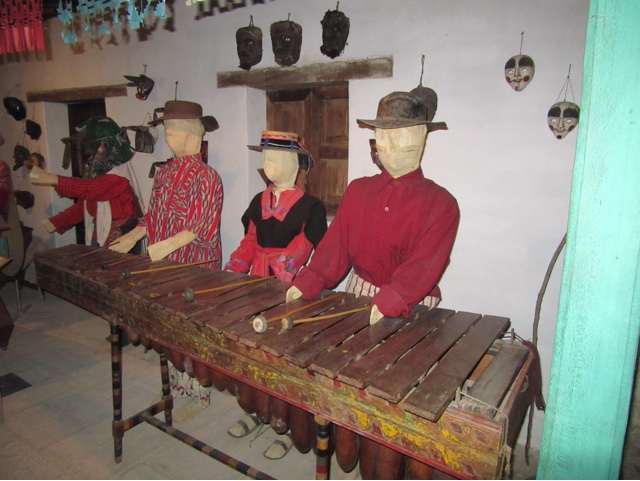 Maximon, or San Simon is a folk saint worshiped by Maya people.  He is NOT approved by the Catholic Church!  He's a cult and said to be a form of the pre-Columbian Maya God Mam.  Legend has it that one day while the men from the village were at work in the fields, Maximon slept with all their wives.  The men were so angry they cut off his arms and legs, but somehow he became a god.  Worshipers offer money, liquor, cigars and cigarettes to gain his favor in health, good crops and marriage counselling.  He's a bully and a sinner - his like of alcohol and cigarettes is perhaps his appeal.  He's not a saint but someone humans can relate to- 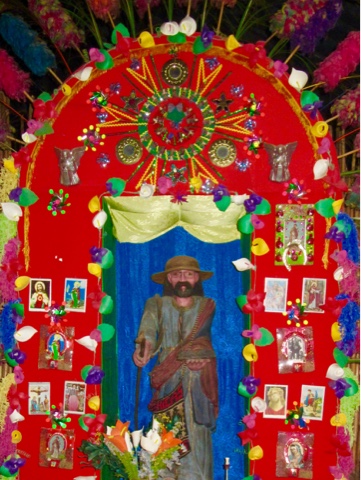 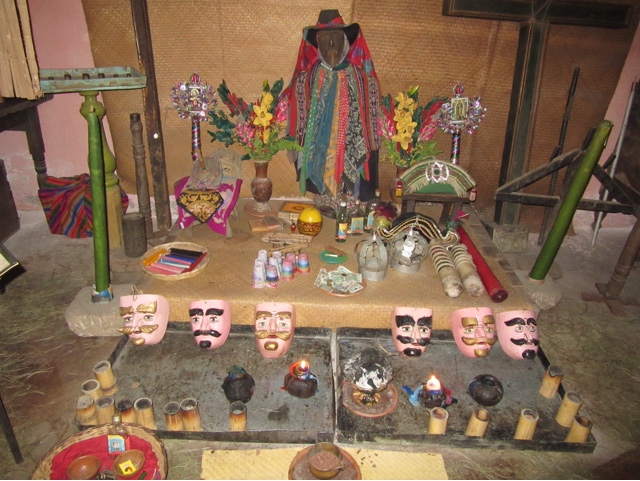 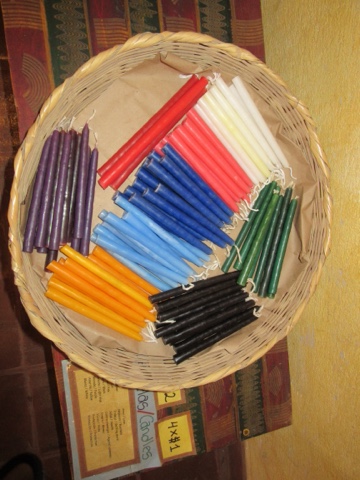 The coffee part of the cultural Center is also very interesting.  Did you know:
-  Legend says a goat herd in the Abyssinian highlands noticed his goats getting agitated
after eating the berry of a certain tree.  After trying the berries himself, he gave some to a
monk who found them useful to keep his audience awake during his sermons!
- In 1550 in Istanbul, the first coffee houses opened for drinking of 'quahwa' which
stimulates discussion and political criticism.  Because of this, the sultan banned coffee
so it was introduced to world markets.
-  In Medieval Europe, the main foods were bread and beer.  Breakfast was soup made
of beer.  A family consumed three litres of beer every day.
- In 1650, coffee houses opened in England.  They were called "Penny Universities"
because it cost one penny to enter.
- In 1683, after the Turks lost in Vienna, they left bags of coffee behind.  The Viennese
thought it was camel fodder, but a Viennese spy, who had spent time in Istanbul,
recognized it and opened Vienna's first coffee house.
-  In 1696, the first coffee house in Paris, Cafe Procope, opened and is still serving
fine coffee today.
-  In 1689, coffee was introduced in New York and in 1720 in Venice.
-  Powdered coffee was introduced by Nescafe in 1938.
-  In 1971 the first Starbucks opened.
-  Coffee is grown in a belt from 25 degrees latitude south to 25 degrees north around
the equator.
-  Robust coffee is planted in tropical areas with frequent rains so there are several
harvests/year.
-  Arabica coffee is planted in sub-tropical regions with a defined wet/dry season and
there's only 1 harvest.
-  Coffee grown in Guatemala is grown under the shade of trees, producing a much
better quality than that grown in full sun.
-  One coffee tree produces 6.5 pounds of coffee cherries, which leads to 1.5
pounds of coffee once the outer (red skin) is removed, which leads to 1.25 pounds of
green coffee, which gives 1 pound of roasted coffee, which makes 32 cups.
World coffee production by country- 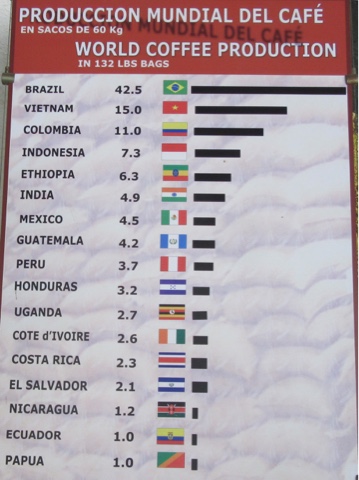 Of course, besides the picking which is done by hand, the farms are completely
mechanized.  In the 'Old Days', the parchment was removed using a mortar and pestle- 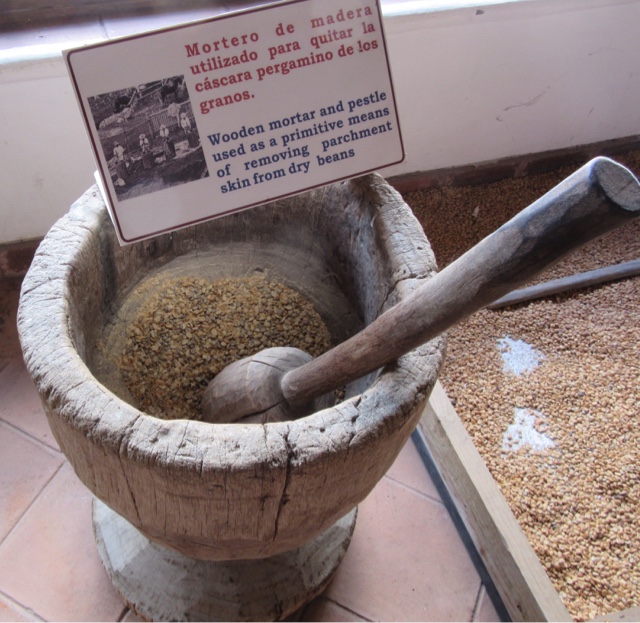 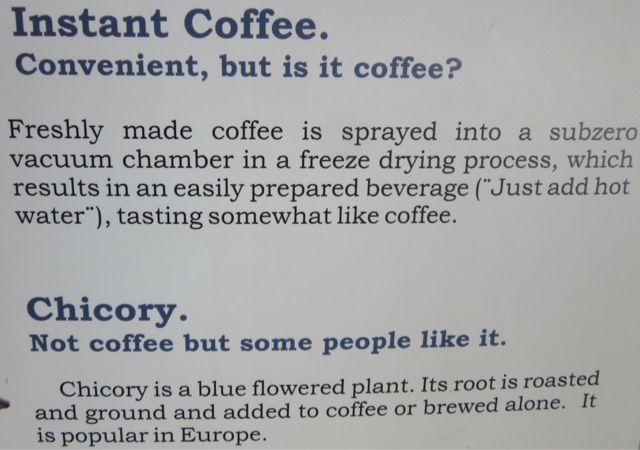 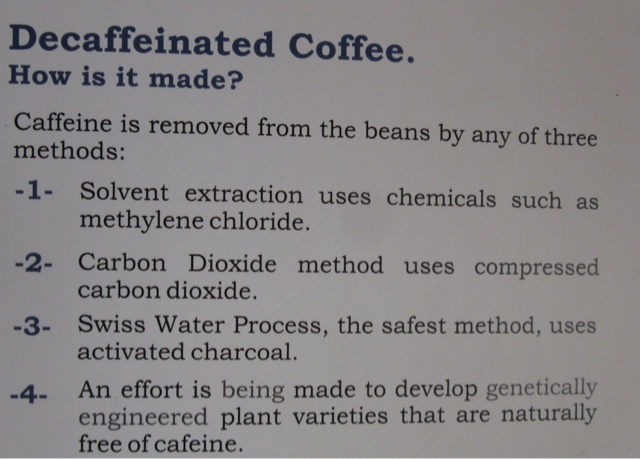 There are numerous coffee pots on display.  The pot on the right is the one my parents
used and one morning while Dad was making breakfast, as he took the pot off the
burner, the bottom fell off and scalded his foot.  He spent a few days in the hospital- 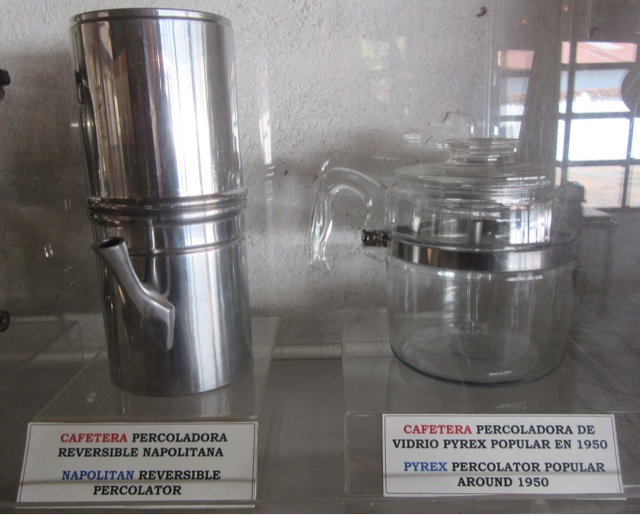 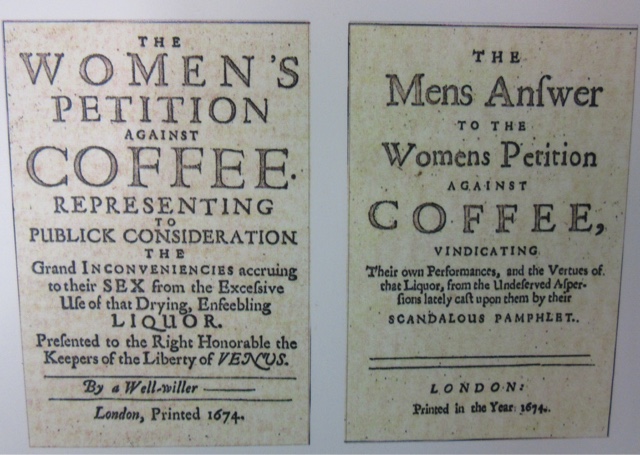 Coffee consumption is down in the U.S- 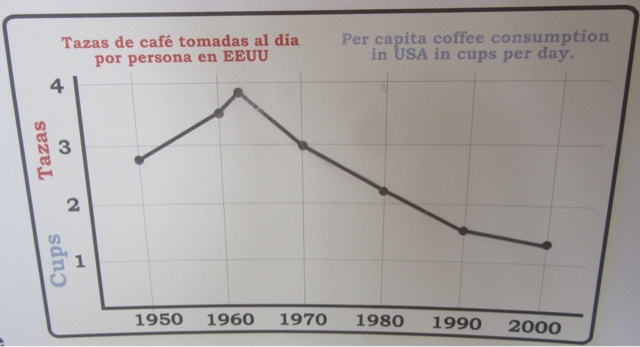 Thanks to the fear of this nasty drug- 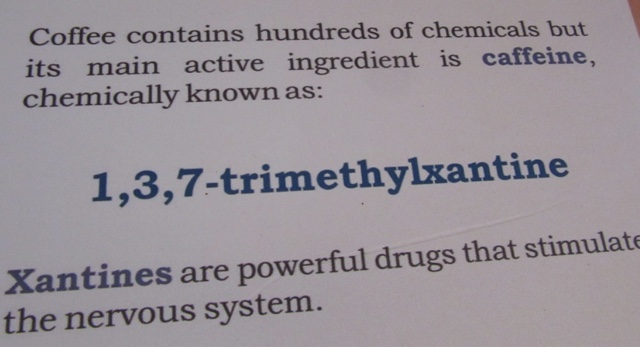 However, it's soft drinks that have replaced coffee in America, yet.... 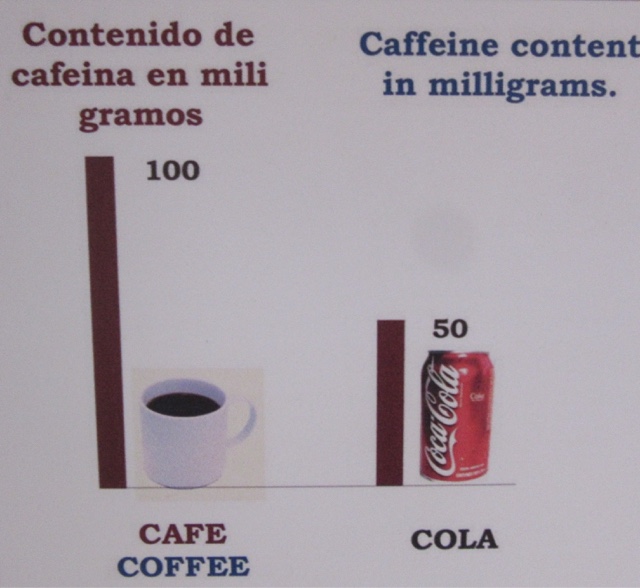 Oh well.  I love the stuff and have so enjoyed learning more about it, as you
may have gathered!
The gardens at Azotea are filled with lots of the plants we can buy at Walmart
but I've never seen a flowering Jade.  It's a vine and the flowers hang down- 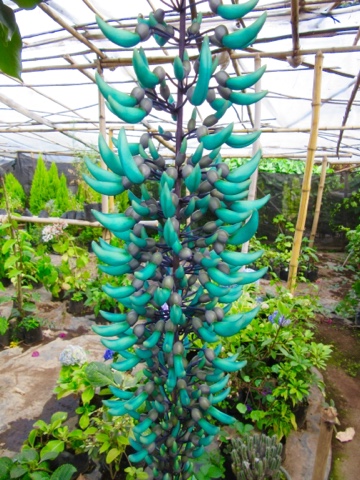 Also, in the coffee fields, beans are planted to add nitrogen to the soil- 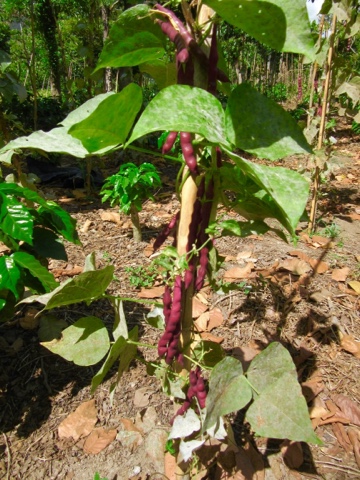 Tomorrow is my last day en la escuela because Friday, we are going to San Cristobal
for a great view.  Should be fun!