I love Saturdays!  Even though I'm 'on a holiday', I still have had to get up during the week to go to school.  Today, nada!  So after coffee and reading the Star Phoenix, Maria and I went to el mercado.
She is choosing potatoes- 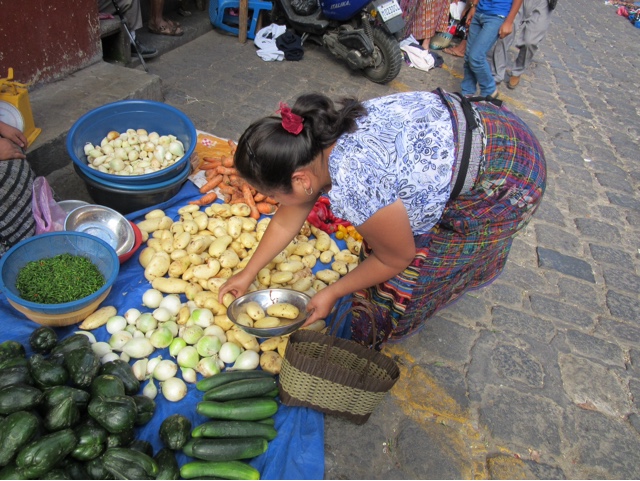 And tomatoes that cost 54 cents/pound. Once selected, they are weighed- 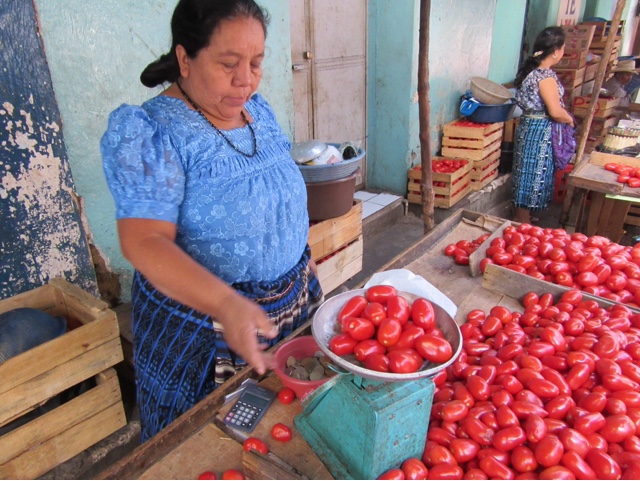 And then dumped into Maria's shopping bag- 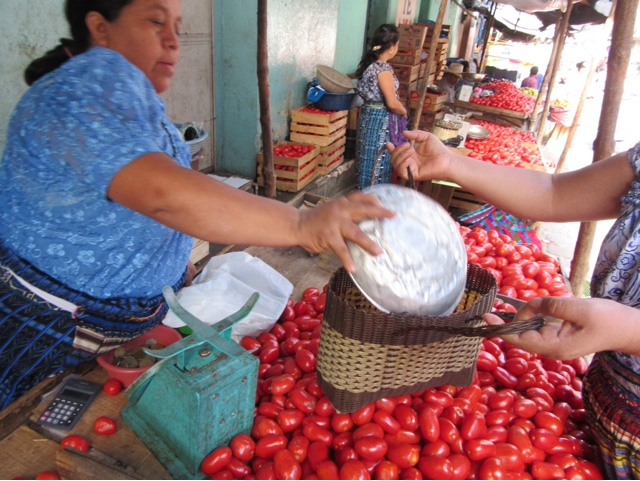 The Maya women wear traditional dress all the time.  It's a multi colored wrapped skirt with a matching blousa called a huipil- 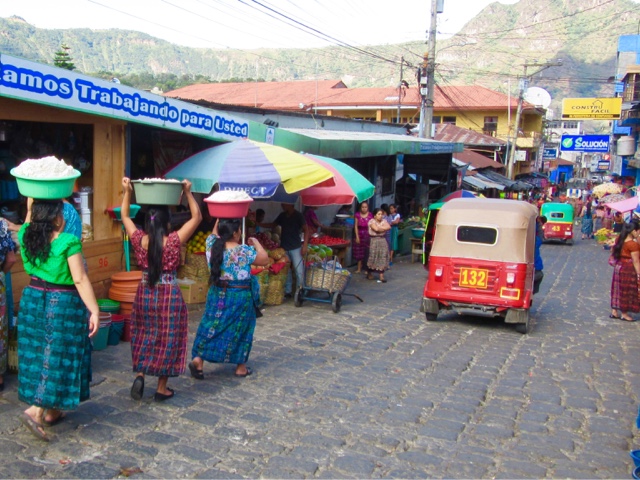 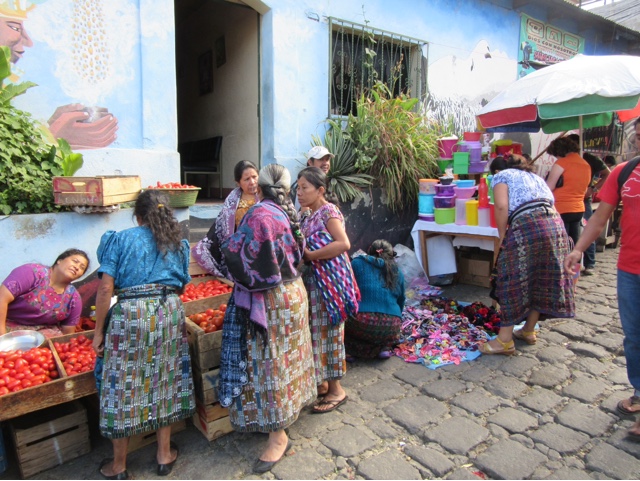 Carne is a treat.  Pollo is chopped- 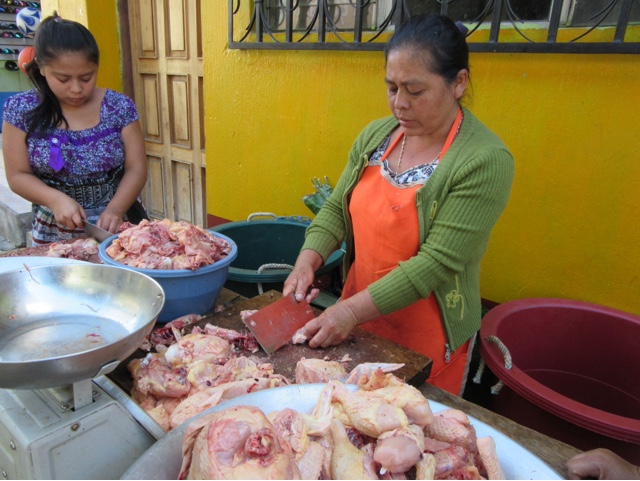 Weighed, then wrapped in a large leaf.  This chicken breast cost $4.50- 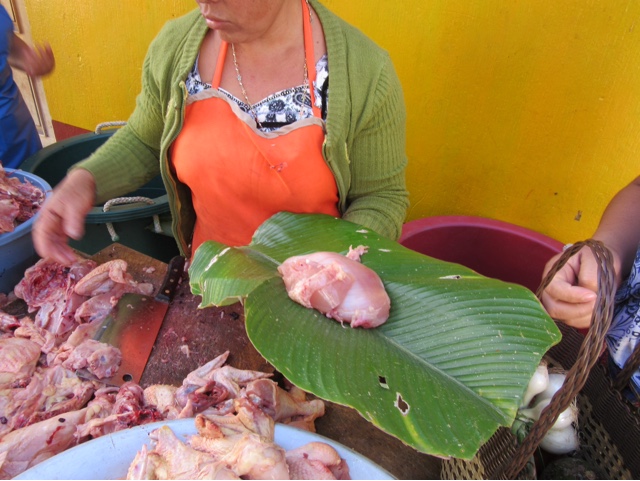 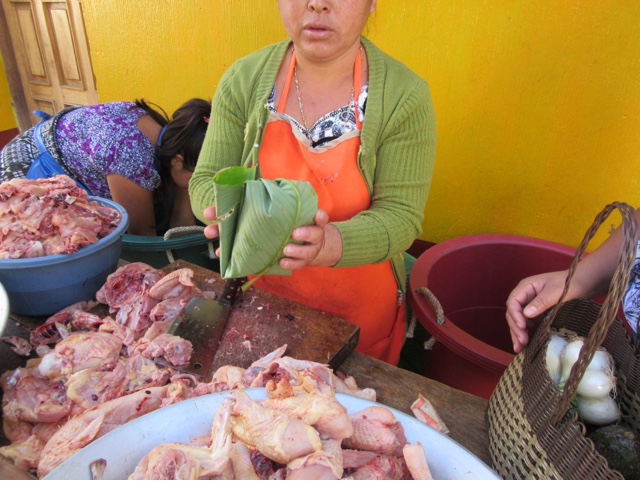 It's plopped into the grocery bag, on top of the tomatoes, cebolla and mint- 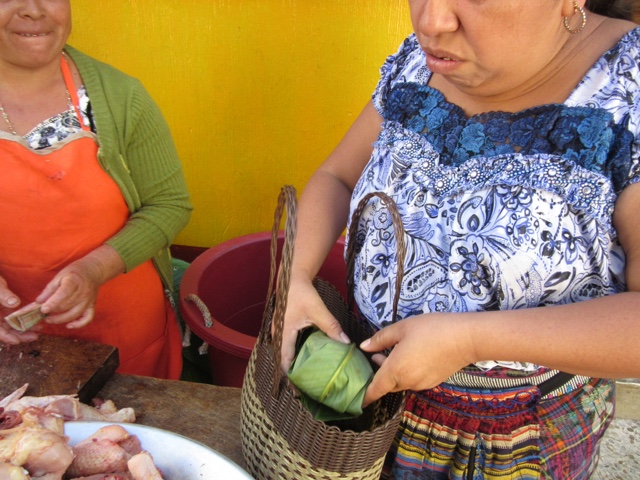 I bought a large piña for $1.80.  Not bad!  2 large and deliciously ripe avocado cost 36 cents.  30 large eggs cost $4.86. That's pretty expensive and I'm not sure why.
San Pedro, the Saint for whom this pueblo is named, stands in front of the only iglesia catholica in town- 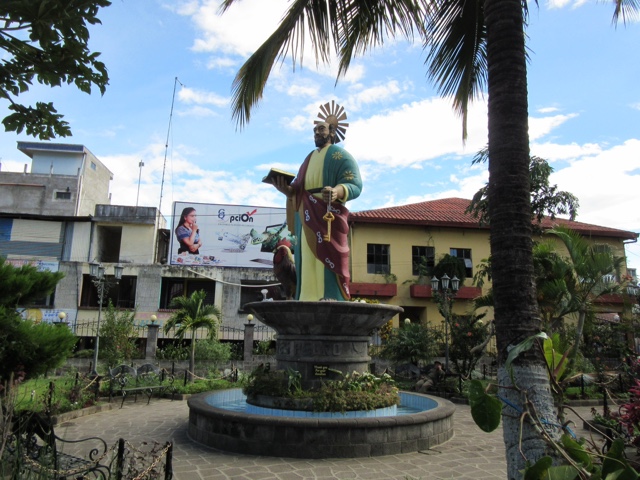 After a great lunch of guacamole and tomato/onion/mint/lemon ensalada, it was time to get ready for the boda!  I wore a traditional Maya outfit- 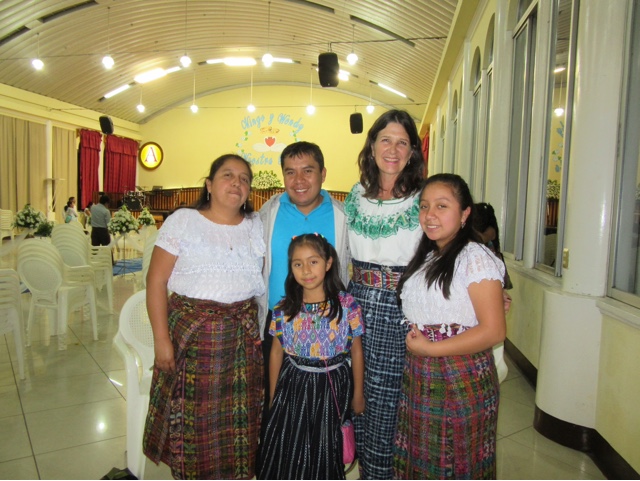 and was really looking forward to the wedding- something exotic to eat, maybe some Ron, a little dancing...
Upon entering the church, I was given a ribbon to wear that said Nuestre bodo:  Domingo and Wendy- 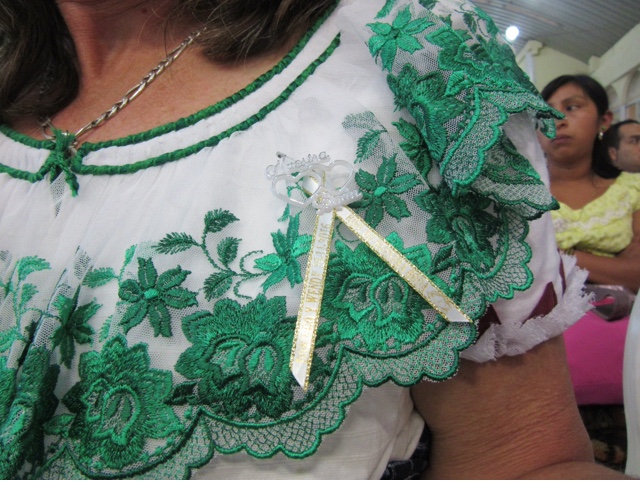 The ceremony was at the Baptist church- 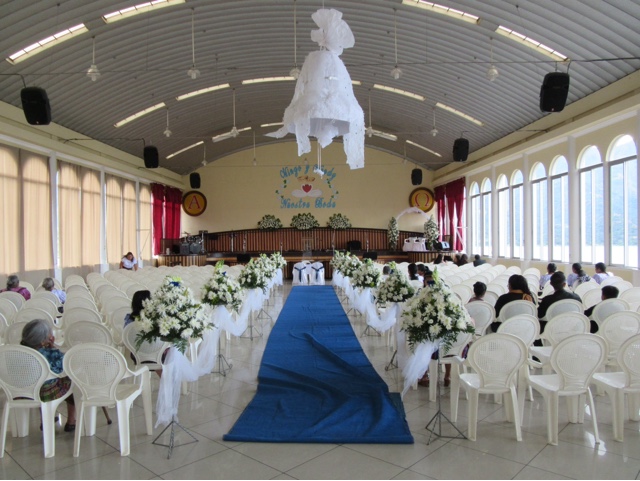 There were a lot of beautiful flowers and the bell hanging from the ceiling is a gift from the groom's parents.  It is filled with rice and beans but is not broken open like a piñata.
The front of the church was very fancy.  There were large white bouquets of fresh flowers- 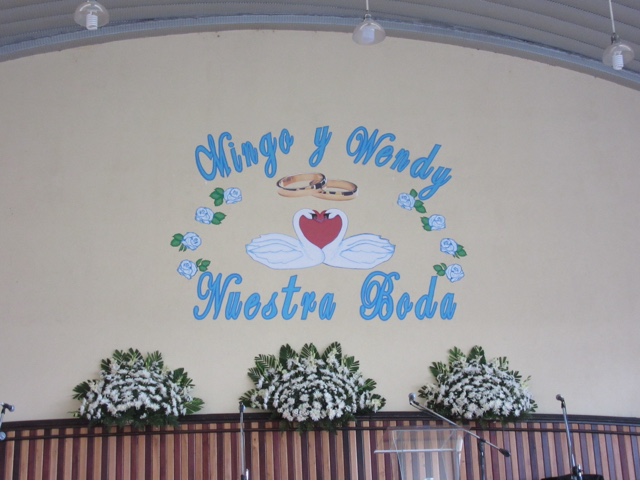 There were 8 attendants - each.  They formed an arch with gladiolus along the aisle and were individually introduced to much applause- 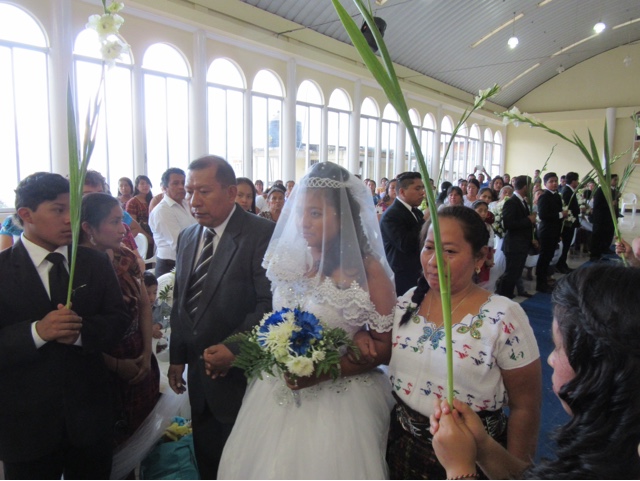 Eventually, the bride entered.  Neither her parents nor the groom's looked very happy but I think that's a Guatemalan thing.
The first 45 minutes of the ceremony was the civil part.  Wendy and Mingo sat in chairs for this long, legal part- 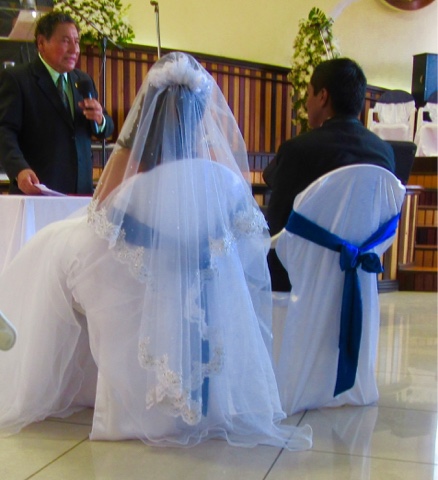 There was a lot of singing.  Maria and a friend started- 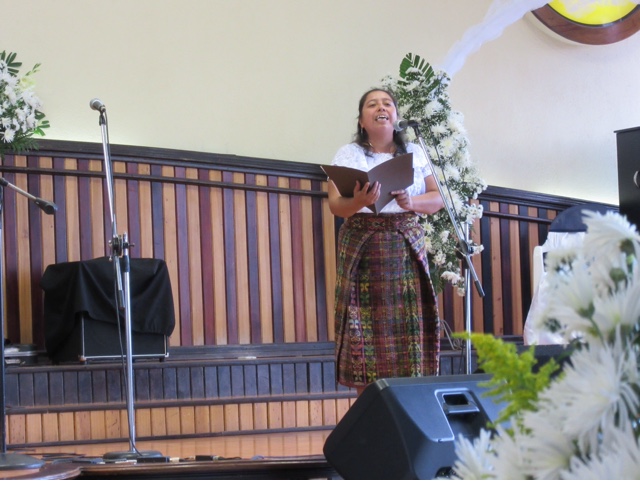 Once the couple moved up onto the stage- 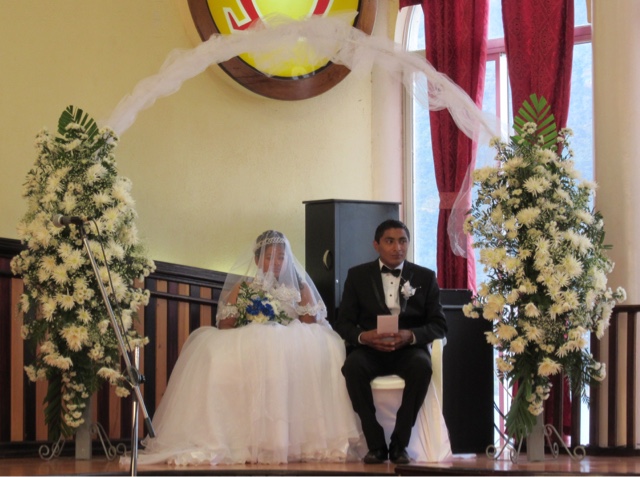 A procession of women came by bearing gifts- 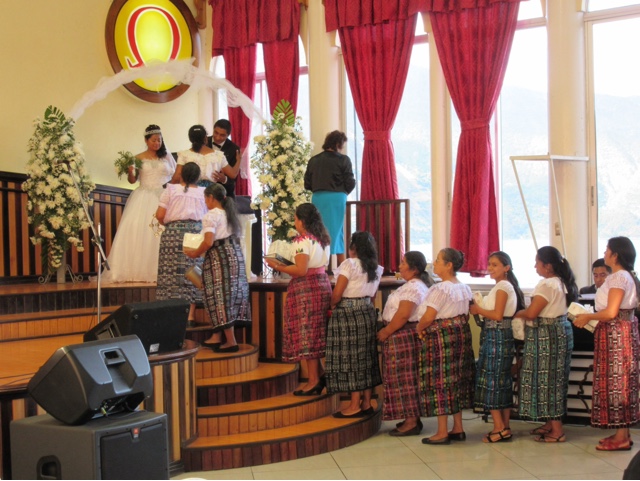 And then they sang- 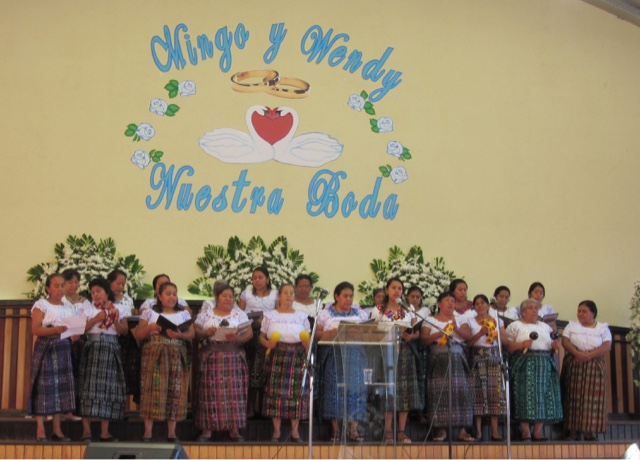 The minister yelled for about 20 minutes, then the couple, with their parents, prayed- 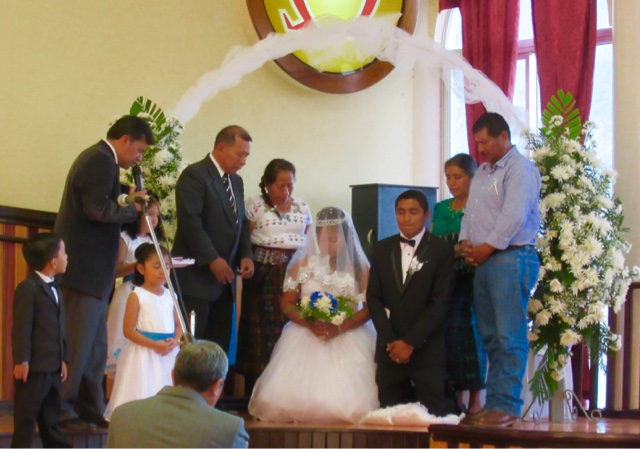 Next, a group of men sang-

followed by a group of teenagers.  Apparently, it is not a requirement to have a good voice and be able to hold a tune.  The backup music is loud; whether it be recorded or live: an accordion, guitar, drums, tambourines, maracas or piano.  It's hard to hear the singing over the music but I know why :)
There were a few more speeches, then the rings were exchanged and the part everyone was waiting for- 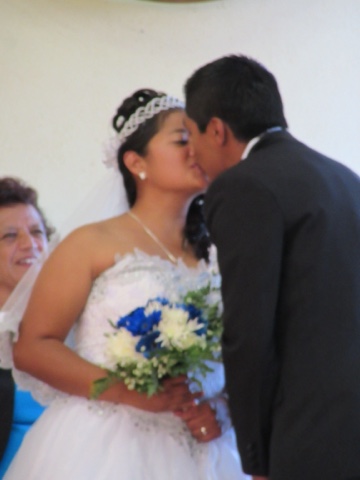 Afterwards, we went downstairs for a small comida- 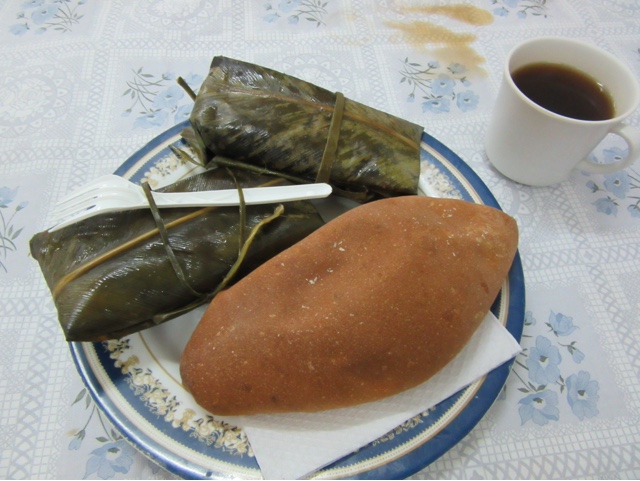 We each only ate one tamale so Maria put the extras in her purse.  The super large dry buns were also packed up.  The coffee had pre-added sugar - that's the way they serve it at my house too.
The cakes were nicely decorated- 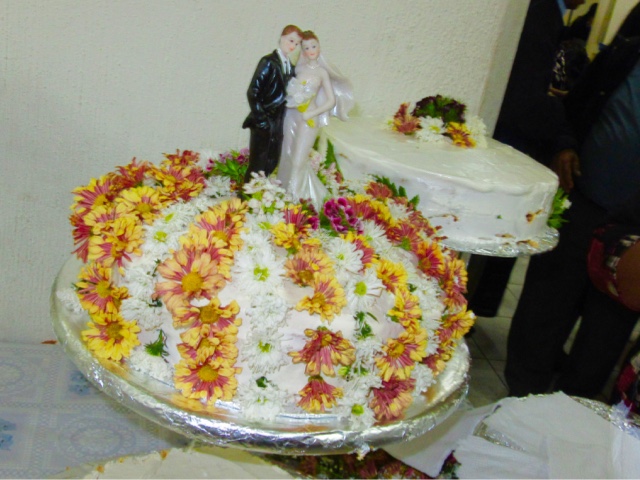 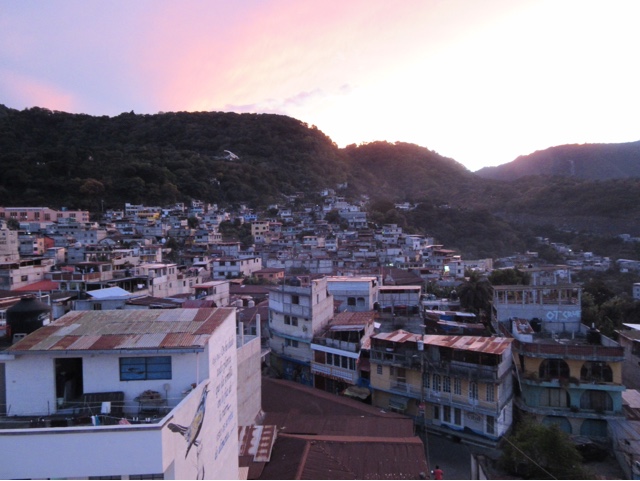 We got home about 7pm.  The ceremony was about 2.5 hours, then the visiting and eating was another 1.5 hours.  The wedding wasn't what I hoped, but it was how they do it here and I was lucky to have been invited!  Tomorrow I'm going to Panajachel, another pueblo on the lake.  They are supposed to have the best market in Guatemala. I think I've heard that before!
at November 26, 2016