Walking to school this morning was so nice because Christmas music was blasting in the streets.  So many of the songs are familiar, just the lyrics are in Spanish of course.  Today has been a better day.  Is it because the sun is shining?  Is it because I went to Santiago so wasn't bored to death?
Rather than go in a lancha both ways, I took a chicken bus there.  It cost 10 Q - $1.79.  The first third of the way was great - new pavement and the bus was just ripping.  Then, the second third was rough gravel and I honestly could have walked faster than the bus.  The last third was back to pavement.
Santiago is a lovely town on the laguna- 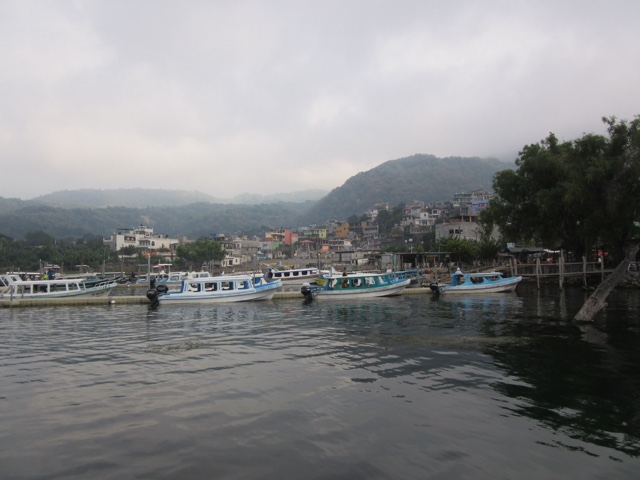 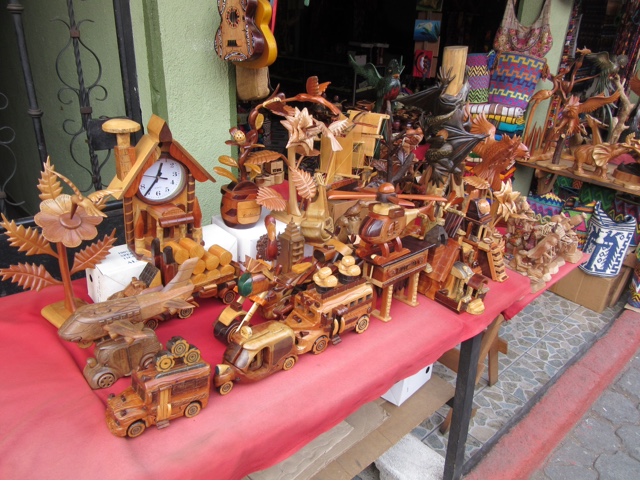 and now because Navidad is approaching- 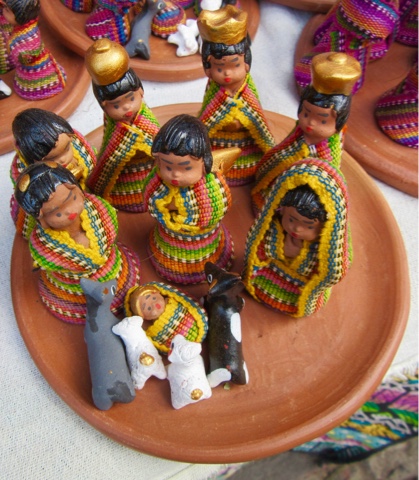 nativity scenes.  But who buys this stuff?  And when there are numerous shops in a row, all selling the same???
The Saint James the Apostle Church was built in 1547 by Franciscan friars who came to settle and convert the Tzutuhil - Maya indigenous people, who had lived in the area since 900 BC.  The church has been devastated numerous times by earthquakes but today is repaired and decorated for advent- 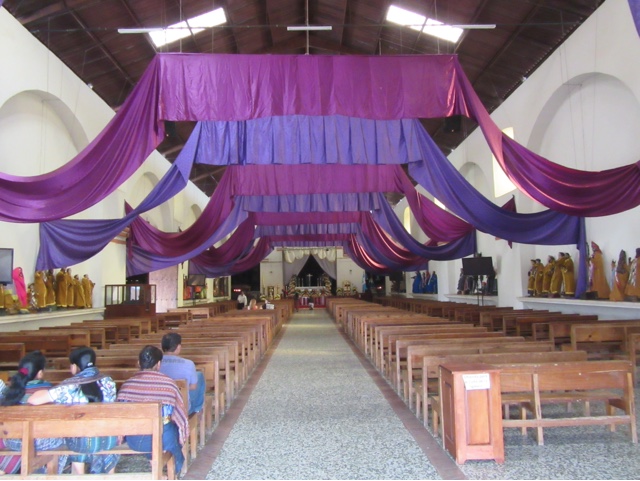 The sides are lined with statues- 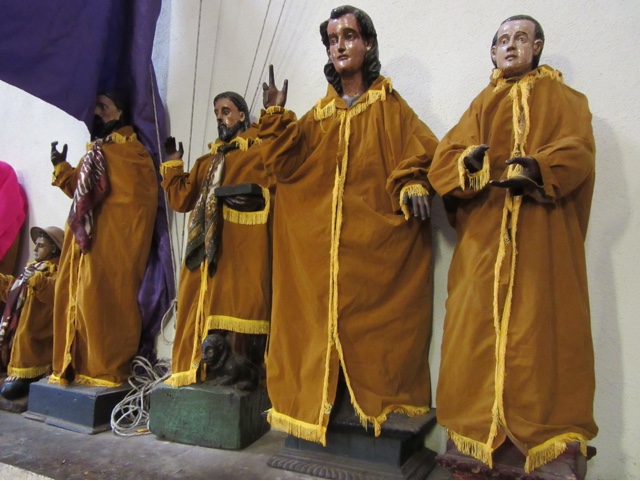 And as usual, there are many fresh flowers at the altar- 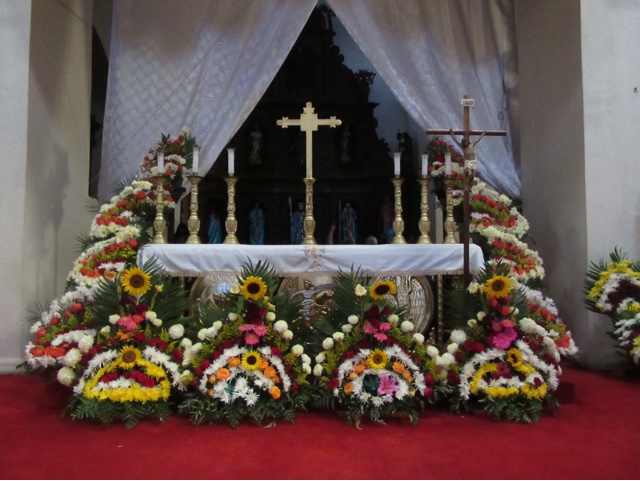 There were about a dozen wedding banns- 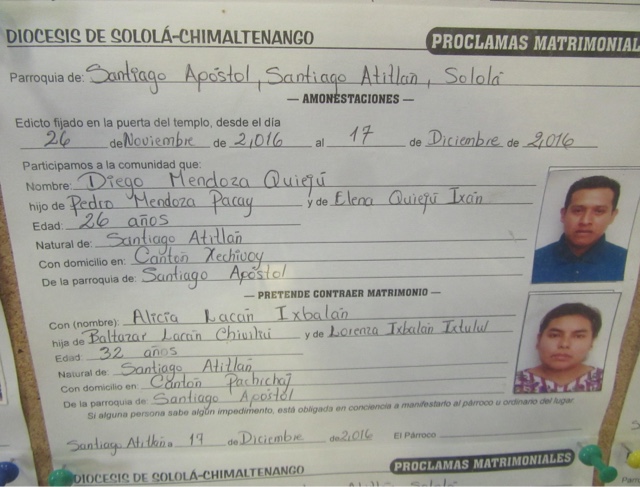 Besides visiting the local iglesia, one of the main reasons to come to Santiago is to see Maximón, the drunken, devilish Maya God.  I just had to ask around town where to find him.  "Ariba!"  "Ariba,  entonces giras izquierda."  So I did- 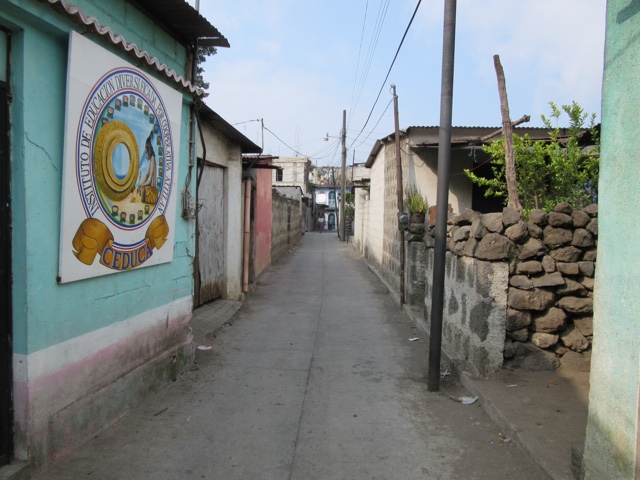 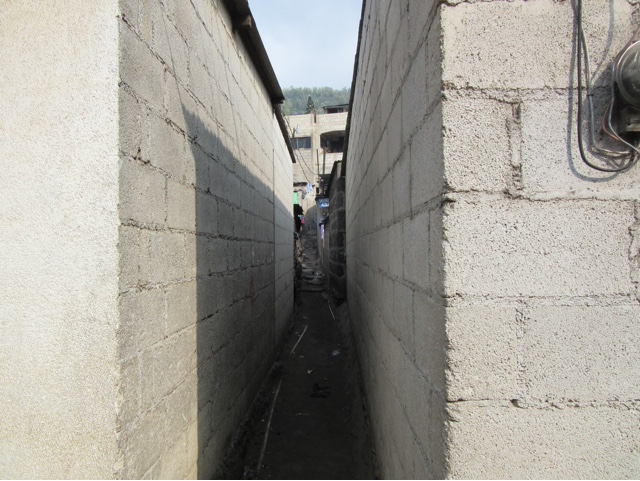 You can't be serious? 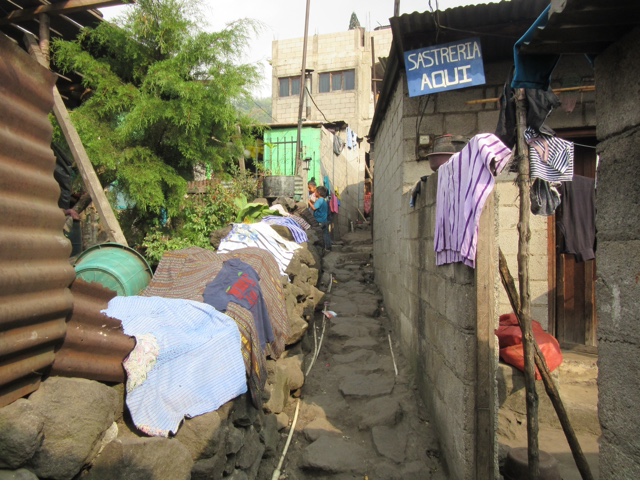 Yup!
A family was already visiting.  They brought eggs, baskets of fruit and vegetables and boxes of who knows what and set them in front of Maximón while they prayed, spread incense everywhere and crossed themselves.  I thought that was kind of weird.  Once they were finished, they left with all their goods and I had him to myself- 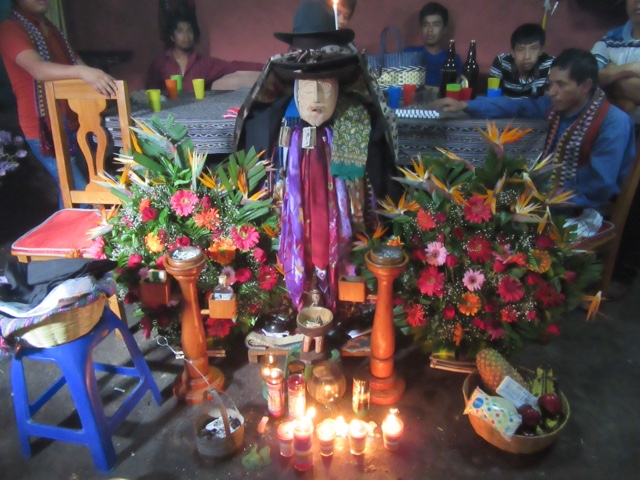 People bring offerings of cigarettes and beer.  The boys and men in the background were just sitting around the table, drinking beer.  It costs 2Q (36 cents) to visit and 10Q ($1.79) to take pictures.
Santa Cruz- 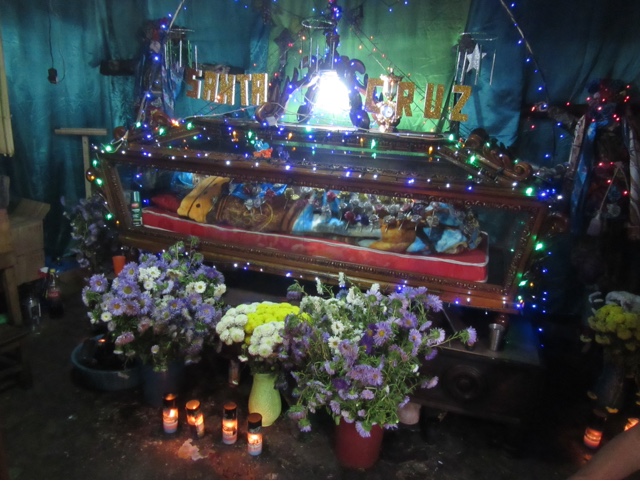 And Saint Nicolas are also here- 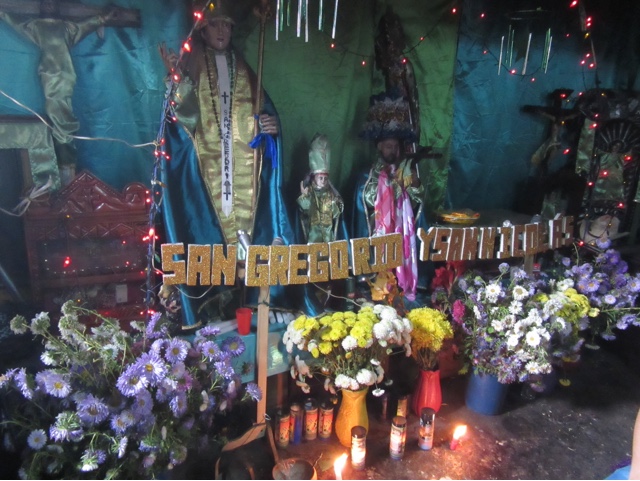 Outside, they sell candles for offerings- 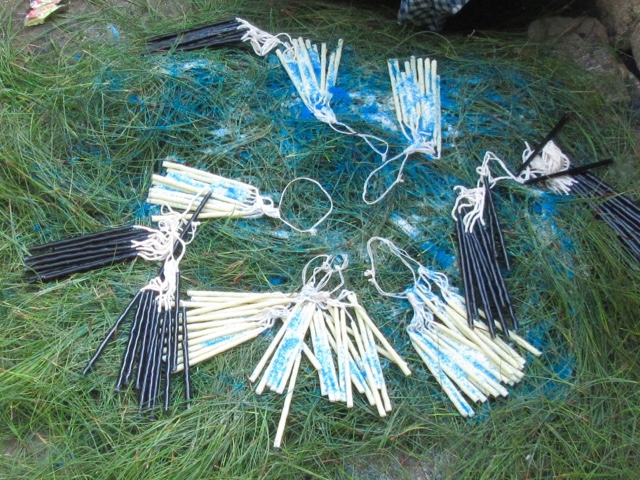 Black candles are associated with Jupiter and Saturday.  They are burned to confuse a doubter, an enemy, or a betrayer and to get rid of a bad neighbor!
Maximón (Ma-she-mon) is known as Satan, a relic of the pre-colonial Maya religion or a Catholic Saint.  He wears a black suit, sports a sombrero and has a moustache.  He either smokes a cigarette, pipe or cigar and is surrounded by rum or Quetzalteca (local alcohol), candles and all kinds of other offerings.
Here in Santiago is where Maximón began.  He's looked after by a group of men who take turns moving and welcoming him into their homes for a year at a time.  He's a leftover of a past religion but revered by many Catholics.  Like today, there were other saints present, however the church thinks prayers to Maximón are witchcraft but he has evolved so Mayas can be Catholics but keep their traditional ceremonies and medicines.  People pray to Maximón when they want something material or nasty and can pray while drinking and smoking!
Very interesting!  It made me think about people who see Christianity, Islam and/or Buddhism as quackery.  Religions are just cults, made by humans to meet some need - real or imagined.  How is Maximón truly any different than another religion?
Back in San Pedro, while walking home from the lancha, women were washing clothes- 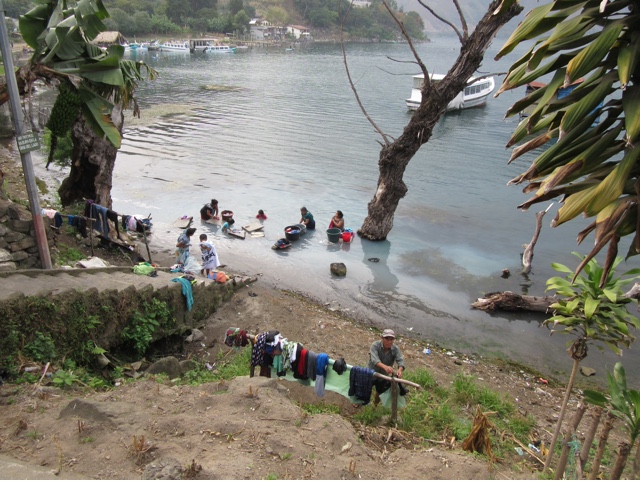 My family does their washing on a large concrete slab inside the house.  Only cold water is available and each item is hand scrubbed, hand wrung and hung to dry on the second floor.  They don't own a vacuum - raw concrete floors are swept often and washed with a pail and scrub brush.  Maria has more than a full time job just doing household chores!
I've booked my shuttle to Xela and will be leaving San Pedro Saturday morning at 8:30.  I'm looking forward to seeing someplace new.
at November 30, 2016