We were to have an 8 am start but Ric misplaced his phone.  He searched his seat, his luggage, people called him and then he went back to the hotel to use their wifi and his computer to use “find my iphone”.  It was showing it was on the bus!  I checked his seat, flipped down the tray and voilà!  I can’t imagine losing my phone, but I have - Murder Beach in Africa.

Our first stop was The Emirates National Auto Museum.  There was a huge Jeep parked outside which is the largest motorized car in the world.  It’s a Willy Jeep in the scale of 4:1-

And a few odd things outside-

This car is drivable-

We stopped at a mosque to fill our water jugs.  That’s one of the downfalls of not having our truck.  We don’t have an 800 litre water tank.  If we want to shower while bush camping we have to have our own water which is ok because there’s lots of room and we can refill at mosques too.

Along the way- sand, sand and more sand-

The speed limit has increased-

We are bush camping at Moreeb Dune which is close to Liwa Oasis and in the Empty Quarter Desert.  It has  a 50° slipface and is 300m high.  It’s popular fro drag races and there were some bikes and quads ripping up the hill.  It’s one of the highest sandhills in the world- 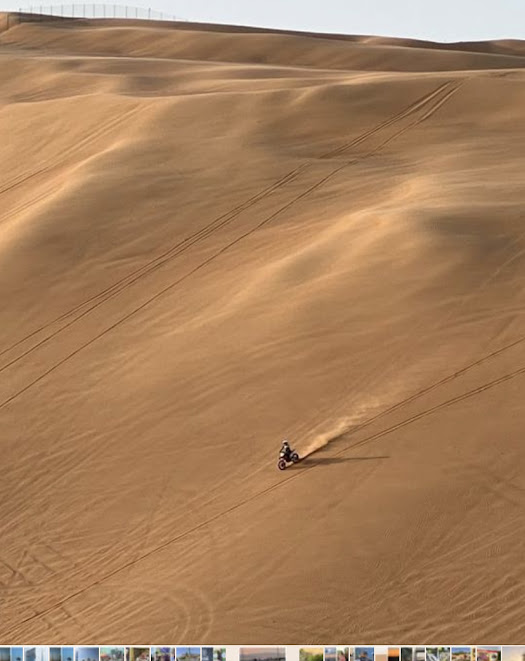 We had our first bush camp supper - spaghetti and meat sauce with the meat being water buffalo.  The texture and flavour were different but very good.  Tomorrow we are going to Dhafeer Fort and we will camp close to Al Ain.  Even though we are bush camping by this gigantic dune, there are showers and toilets! I have bought a big jug of water to do my own showering but that was not required ! Bonus!