We camped right beside the Kow Ata Underground Lake so we were ready for a swim in the morning.  We descended 65 meters to a sulphurous subterranean world where the water is naturally heated to 36 degrees- 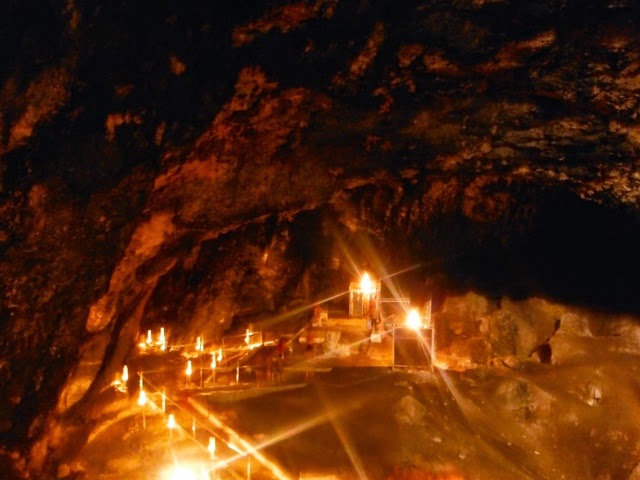 This is the funny entrance message.  What is a sober king? 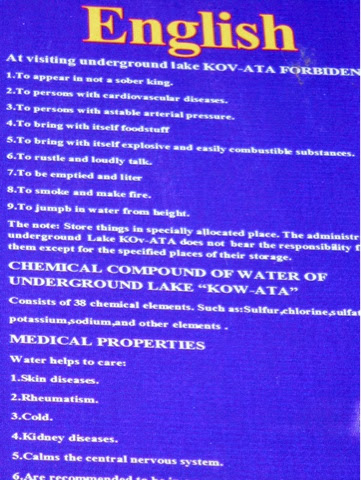 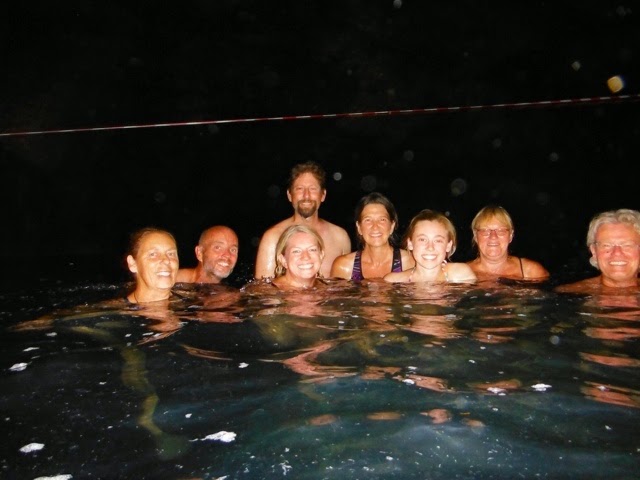 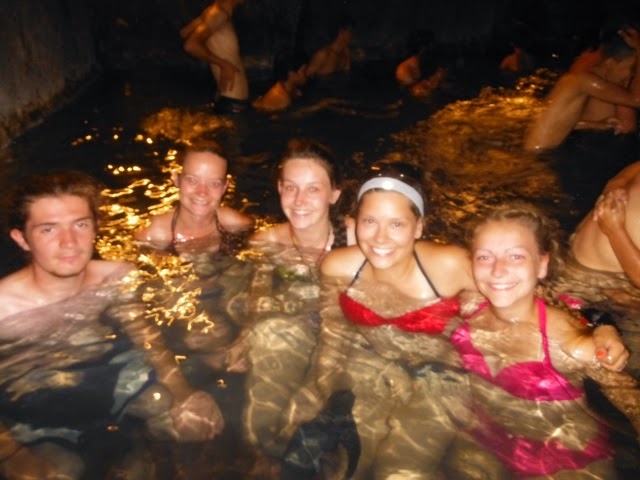 On our way to Ashgabat, we stopped at the mausoleum of President Niyazov who had some crazy ideas!  He renamed the months of the week after his children!  People were to call him Turkmenbashi which means 'leader of the Turkmen'.  He erected gold statues of himself and had posters plastered everywhere.  His slogan was " People, Nation, Me".

This is the exterior of his mausoleum.  Pictures are not allowed inside.  He is buried along with his father (ceremoniously because he was killed during WWII), his mother and two siblings who were killed in the earthquake of 1948.  Everything is white marble, with gold, green and black accents.  The interior of the dome is a beautiful white/blue- 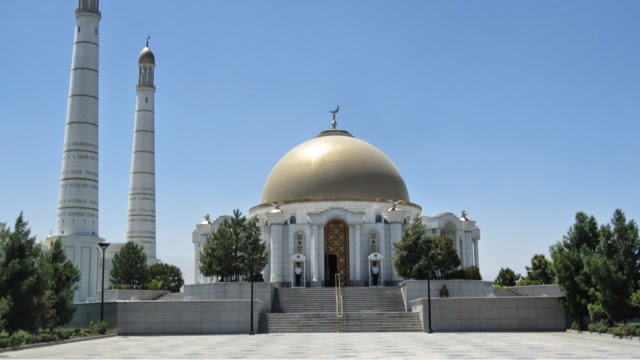 Next to the mausoleum is the Turkmenbashi Ruhy Mosque, the largest in Central Asia, accommodating 10,000 worshippers.  The minarets are 91 meters tall to commemorate 1991- the year of Independence.  Inside, it measures 100 meters long.  The dome is 50 meters across and 51 meters high.  The carpet was hand-woven by 160 women over 2 years.  It weighs 1.2 tonnes.  There are individual prayer stalls woven in the carpet, as well as the eight point star, representing the eight gates of paradise in the Islam religion.  There are 8 doors and the final gate points to Mecca.  There are 48 windows in the dome, to represent 1948, the earthquake.  400 vehicles can park underground. 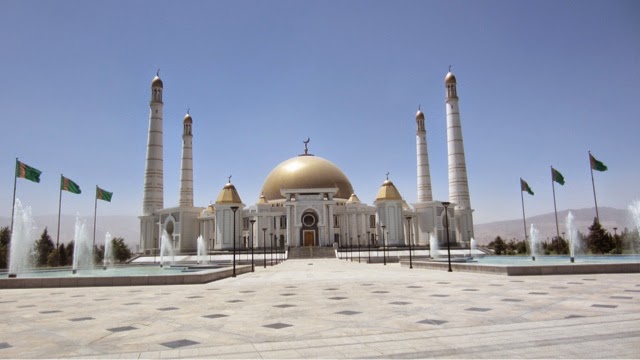 The people are Suni Muslims but anyone is free to start a new religious sect if they have 500,000 names on a petition!

Ashgabat was levelled in an earthquake on October 6, 1948.  It was rebuilt in Soviet style, but with President Niyazov and oil and gas revenues, today it resembles a mix of Las Vegas and Pyongyang (the capital of N Korea) with fountains everywhere- 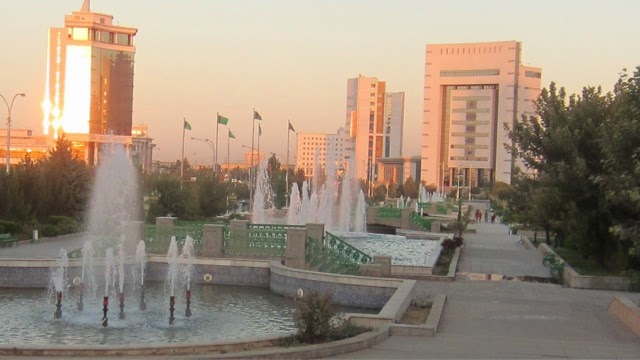 Many of the buildings are empty, guarded by police if it's a government building and pictures are not allowed.  Most are made of marble, at least the exterior- 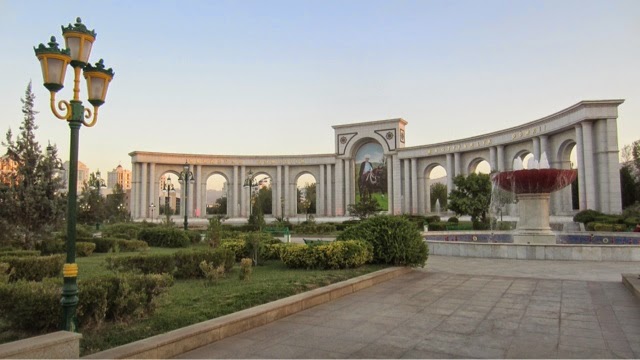 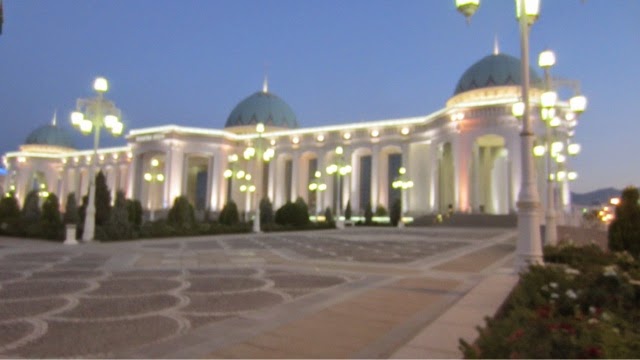 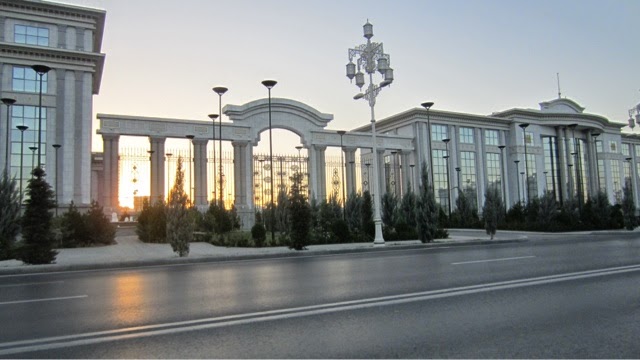 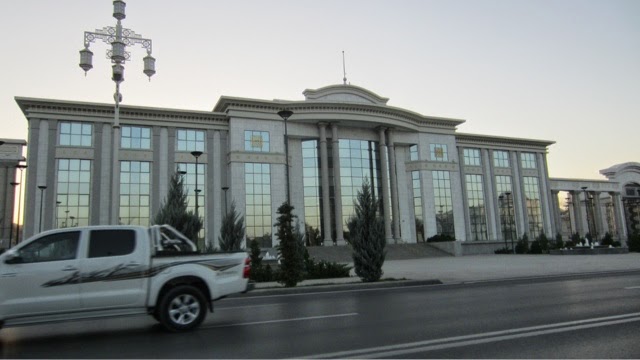 This is what they call an Americano!  To be fair, they did bring a pitcher of hot water to add to the shot- 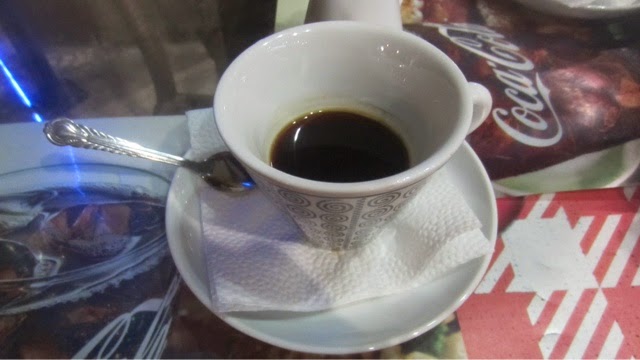 We went to the Sofitel Hotel for free wifi.  It's a very fancy place and one could live in the bathrooms.  For instance, the toilet seat is connected to the toilet!  This picture is in the lobby, looking up at the rooms- 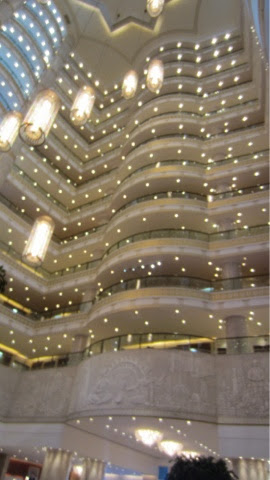 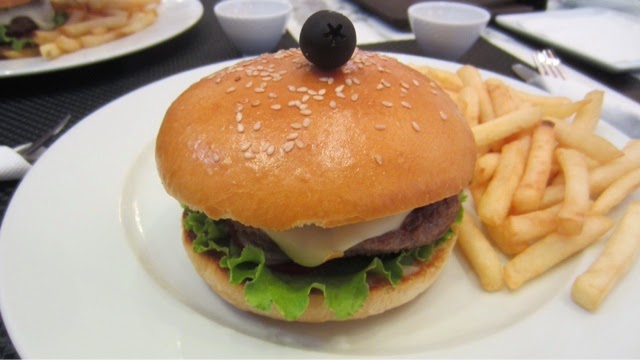 This is a typical boulevard- colored lights and water flowing.  There is only one thing missing - people! 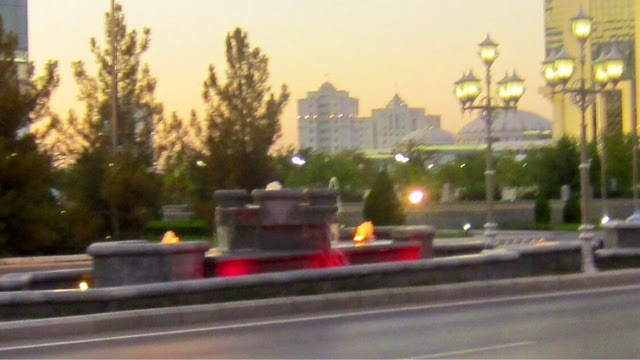 Even the under-street walkways are made of marble- 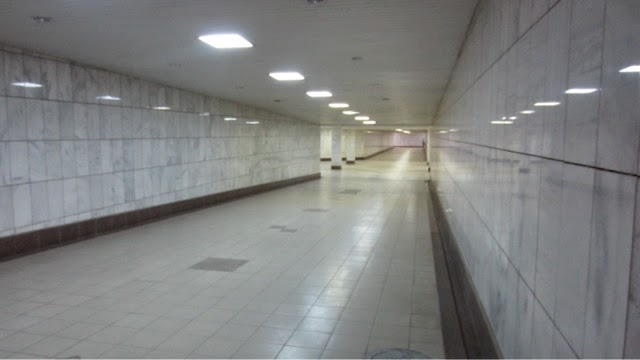 As we were walking around, we came to a few police 'road blocks'.  No one was allowed to walk or drive down the particular street.  Traffic stopped and the city was extremely quiet.  So weird.  Even in our hotel, there were 2 or 3 women working on every floor, watching.  There's an apartment in one of the rooms where they live.

Ashgabat is such a strange city- huge beautiful buildings, police everywhere controlling everything and few people walking about.  All of the women wear long beautiful dresses, often with a scarf/turban headpiece.  They were also quite thin.