Sunday, the kitchen is closed at my house - Marta deserves a day off!  I walked downtown, looking for a restaurant full of Guatemalans because that way you know that it's good food and it's cheap.  I passed numerous restaurants with high prices, made especially for tourists but I knew there had to be what I was looking for somewhere- la comida tipica.  I finally asked a server if desayunos was served in the mercado.  No, he said, only almuerzo.  Liar!  I walked to the market and there were numerous places I could eat breakfast.  Chorizo sausage costs 66 cents.  Two scrambled eggs - 66 cents.  Why would one eat anywhere else?  I had this fancy looking fruit, yogurt, honey and granola bowl for $3.  I'm not sure where the yogurt or granola were but oh well- 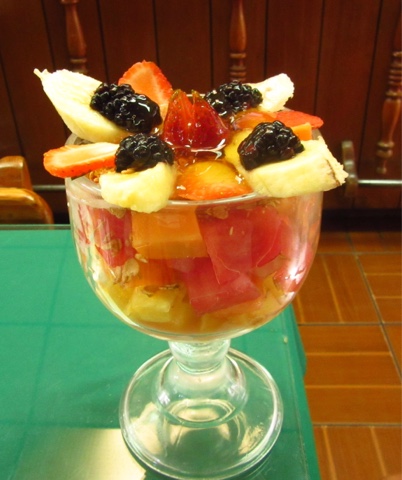 After breakfast I wandered around the mercado and bought 5 DVDs, obviously pirated because they cost 86 cents each.  They're all Oscar contenders except for Nacho Libre which is supposed to be a funny one about Mexico.  Each tienda put the dvd into a player to show me the film on a tv screen and to make sure they spoke English.  After my shopping spree, I headed to Filadelfia Coffee Finca on a chicken bus to buy some 'good' coffee.  I toured there last year and bought coffee so I'm hoping it's the same.  Fuego was up to his old tricks- By the time I got back, it was lunch and I was back in the mercado.  On the top left is ground pork in a patty, the bottom left is torta de carne - basically a hamburger patty and my favorite is on the right - chile rellenos - ground pork mixed with spices rolled into a ball and fried.  So good!  I also had pico de gallo- 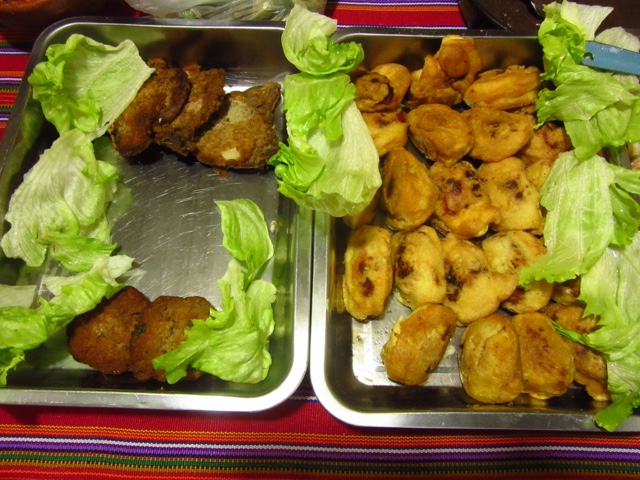 I had my fingernails shellacked and walked home, only to find the beginning of a Lent Procession in the street in front of my home.  During the next 5 Sundays of Lent, different neighbouring villages will walk to and around Antigua to commemorate the death of Jesus.  These three fellows were the leaders- 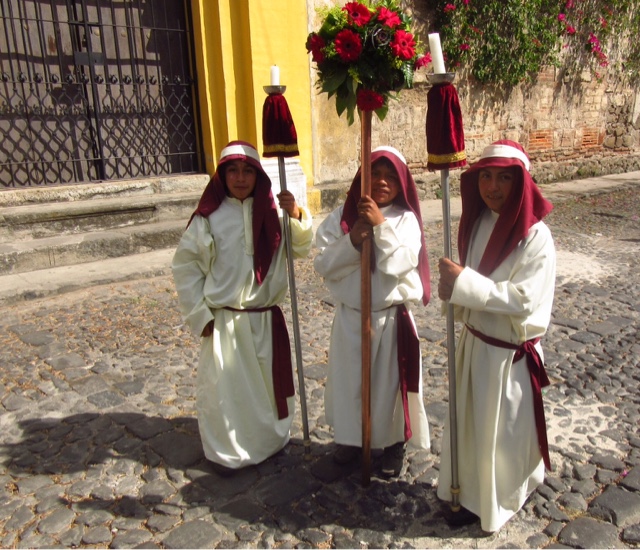 There are numerous alfombra - carpets of flowers on the road to praise Jesus.  The procession walks right through them- 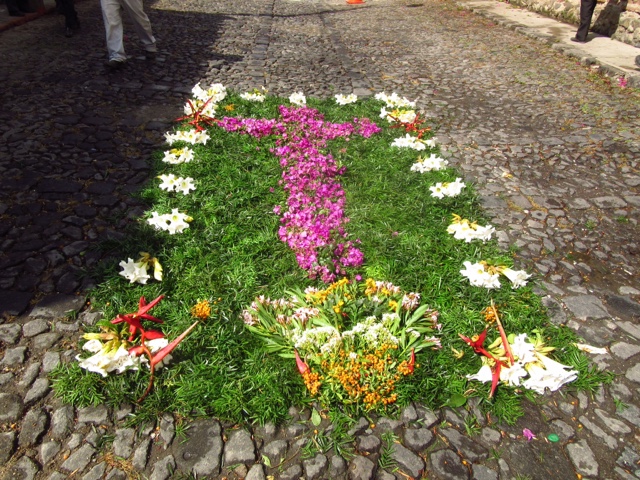 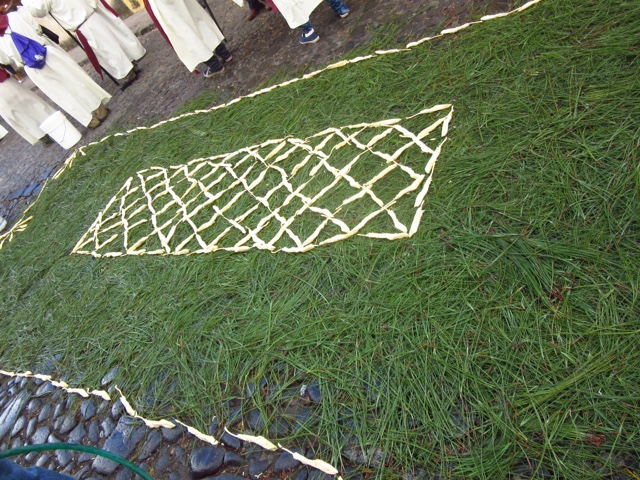 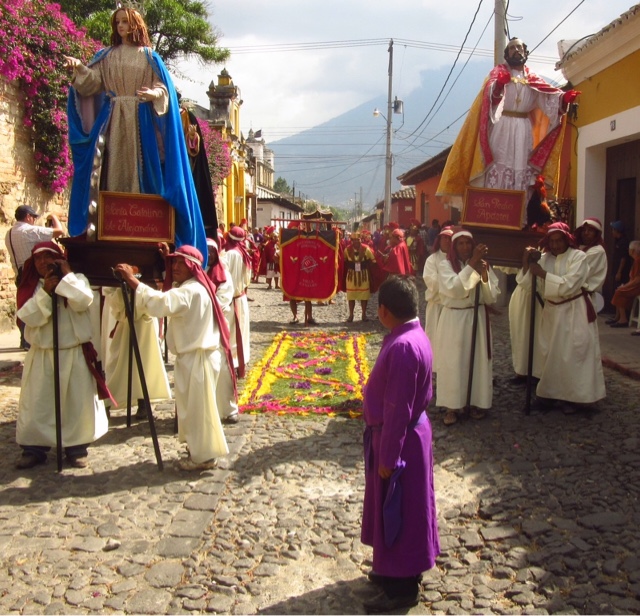 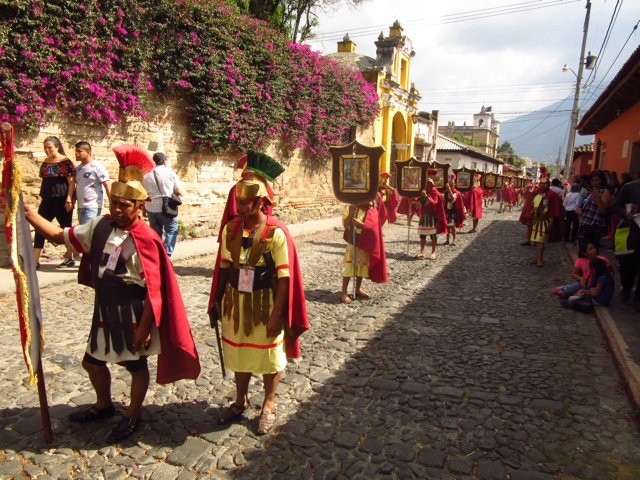 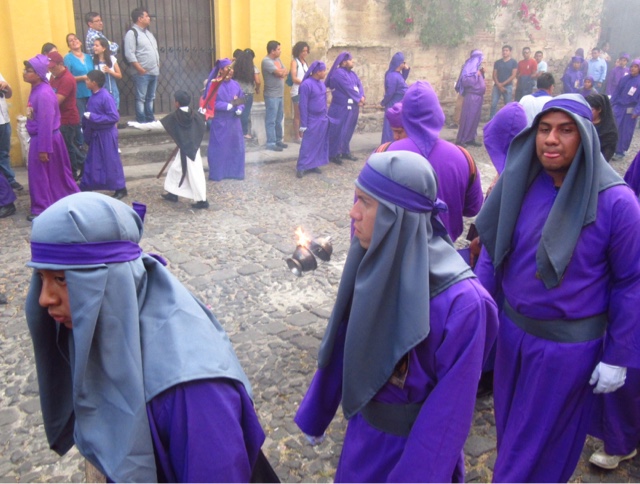 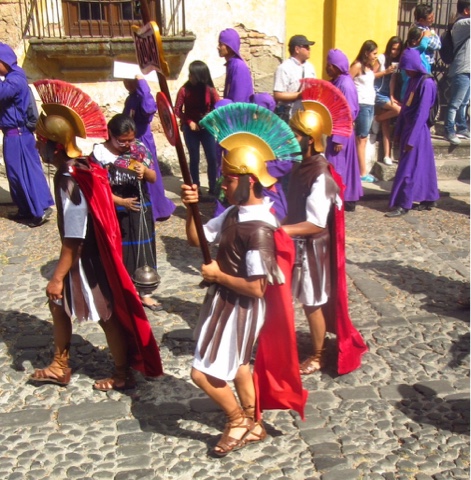 Men carry the float of Jesus- 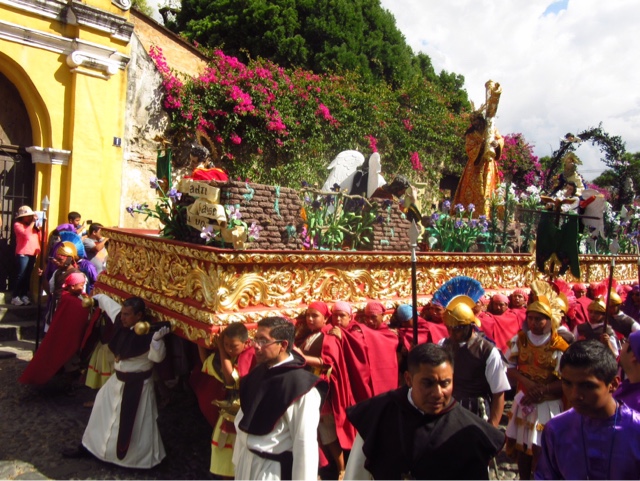 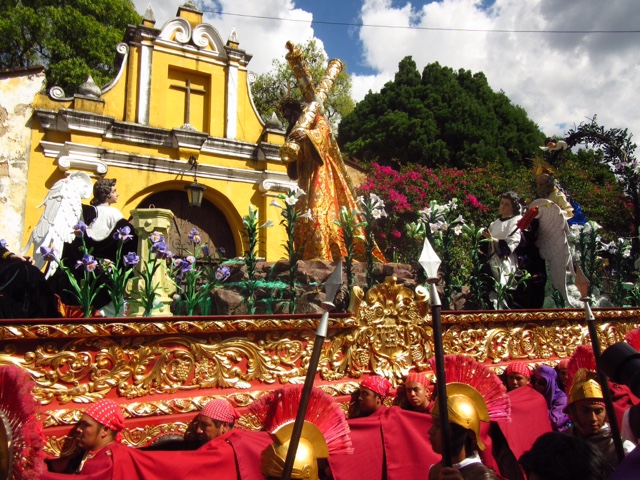 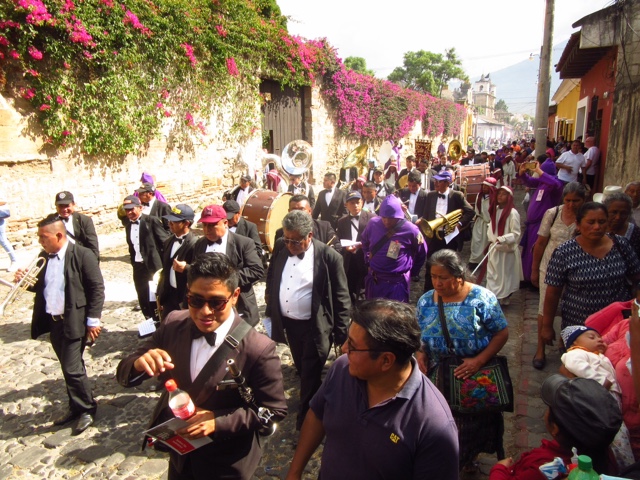 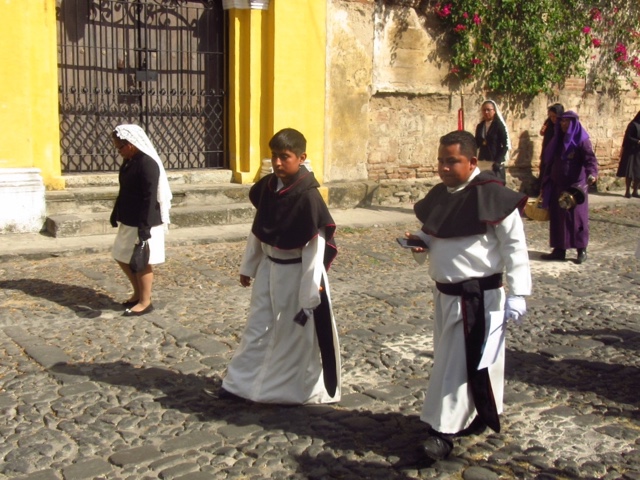 This little guy is getting into it early.  He's carrying his own andas of Jesus- 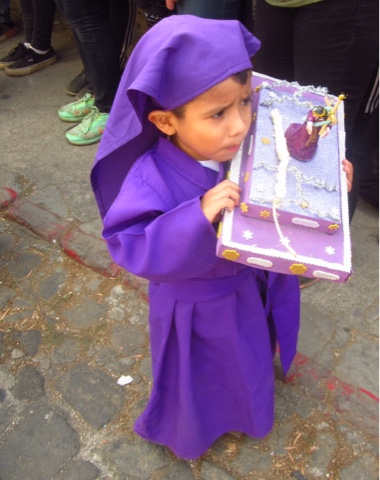 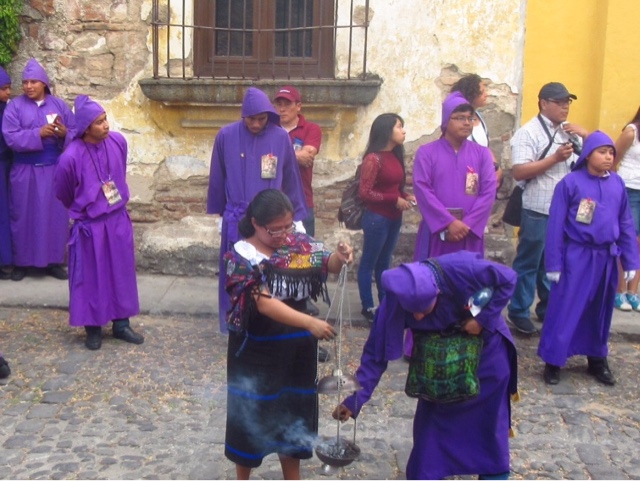 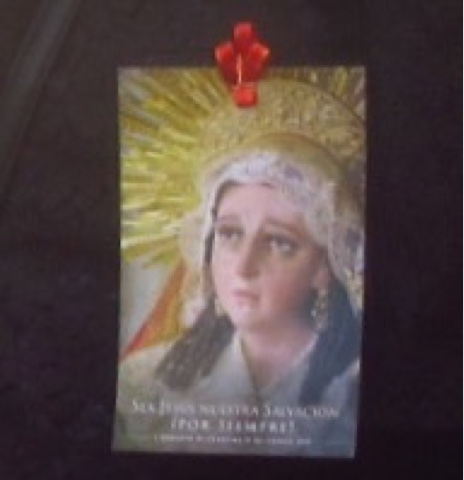 Women carry the andas of Maria- 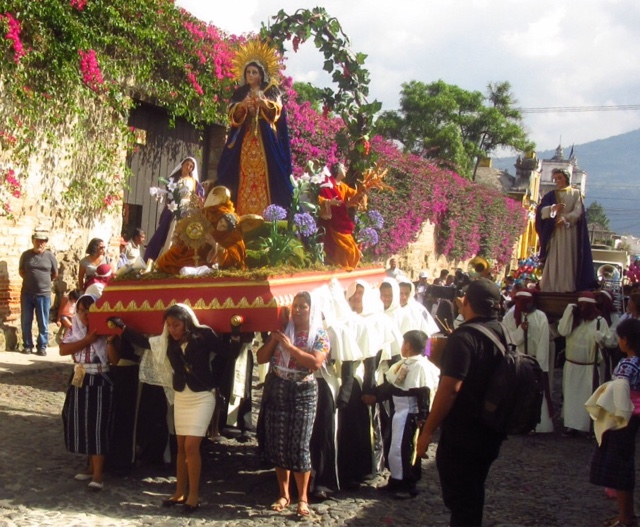 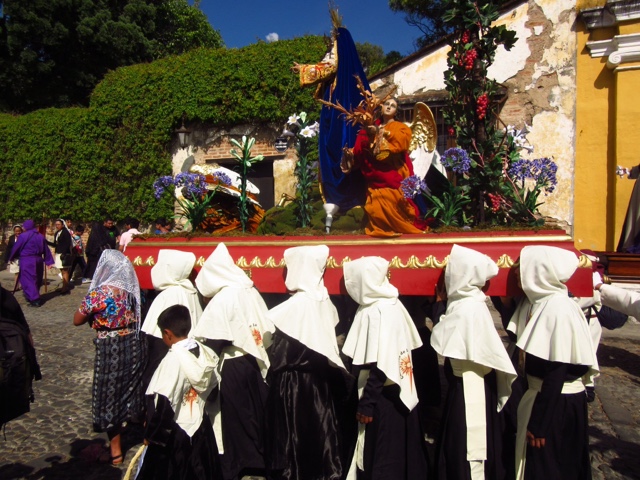 Following Maria is San Juan and Magdalena.  They always accompany her- 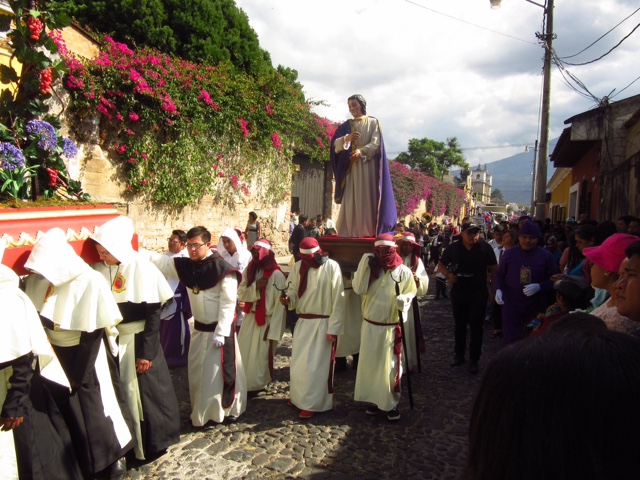 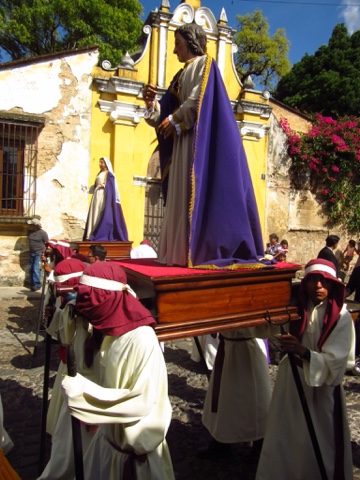 The last part of the procession - (it's not a parade), is another band, again playing slow and mournful musica- Quite a few members of Marta's family were here from the ciudad and Antigua to watch the procession from right in front of her house.  Marta loves to cook and entertain.  I am very lucky!
At 5:30, I met 12 English speaking ex-pats at 6e Avenida and 6e Calle.  We went to a restaurant for supper and even though I ordered a stuffed pepper, I got a chile rellenos.  It cost 4 times as much as the one I had at noon and tasted 10 times worse!  Anyway........    Walking home, the procession was just on its way out of town!  What a long afternoon for them!
I had a great weekend.  I'm not used to having to do things like school and work.  It's kind of crimping my style but it's back to the grind tomorrow!
at February 18, 2018