Air conditionning - I love you!
Our first objective for the day was to get to Cocacobana Beach and pick up our tickets for the Sambodromo tonight.  Leaving our hotel, there was a celebration in the street- 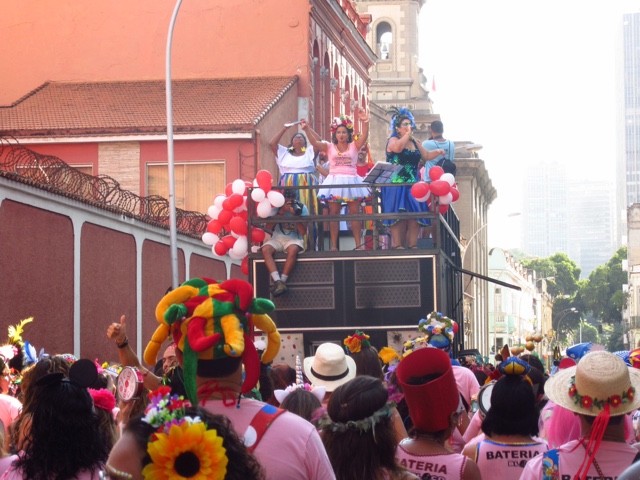 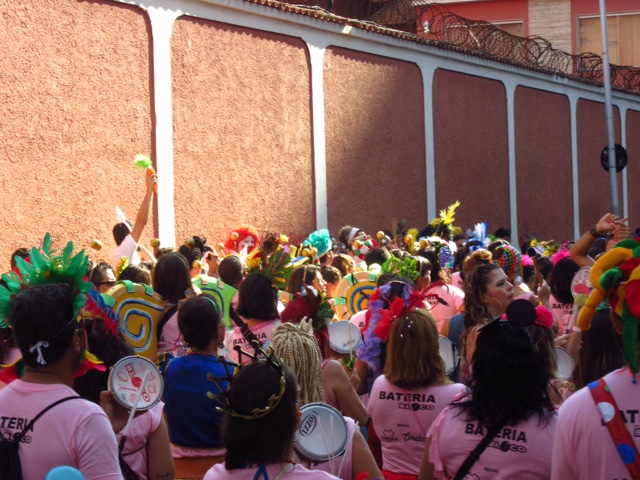 The music is very local - lots of drumming and singing, of course in Portuguese so I don't have a clue what they're saying.  People dance a bit, yell, sing along, but everybody drinks.
We walked to the metro, which is only about 4 blocks away, and what mayhem.  We tried to go in a couple of times, only to be pushed and shoved back out.  We were squished amongst crazy carnavalers, coolers filled with beer and costumes. A few times I truly thought I was going to be trampled!  Some said the metro was closed, others pointed in different directions for the entrance.  Wiebke moved to 'freedom' before me and we got separated, so I went alone on the bus to Cocacobana to get the tickets.  My pickup time was 11:40 and I got there just in time, but that didn't mean anything.  I still spent an hour there.  Very few buses were going to Cocacobana and the one I 'snuck' on had the back door open and two guys with coolers standing on the bottom step.  I stood on the second step and held on for dear life.  I don't think it's normal for the back door to remain open because we had a lot of people looking at us, smiling and yelling.  The faces of the people riding in the bus by the front door were smeared against the glass, that's how packed in they were!  The young men close to me were obnoxious, even though I can't understand Portuguese.  They hollered at every girl and then laughed their heads off!  We dropped numerous people off along the way but never picked anyone up.  I think we were overloaded the whole way to the beach.  Eventually I found the hotel and got the tickets then headed to the beach.  The streets were packed with young people - 2 million people street party and I think I ran into most of them.  Carnival started last night and will run for four days, ending Tuesday night at midnight when Ash Wednesday starts.  It's 4 days for entrepreneurs as it seems like everybody sets up an umbrella and pushes coolers around in shopping carts, selling beer, water and food- 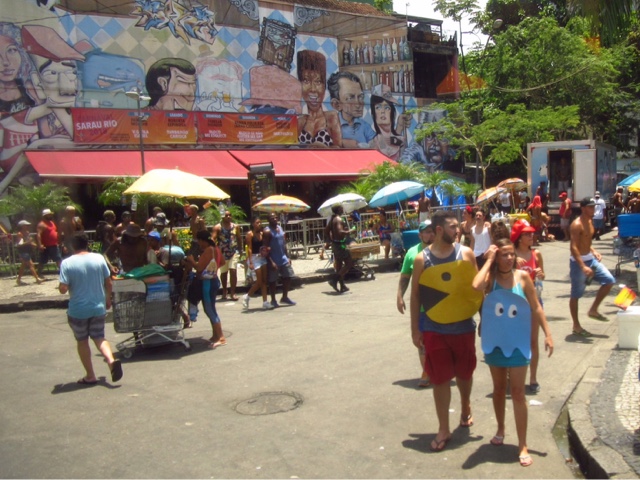 Carnival is like a Rider game, only times that by 2 million and I'm not joking.  Many are in costumes and love to get their picture taken- 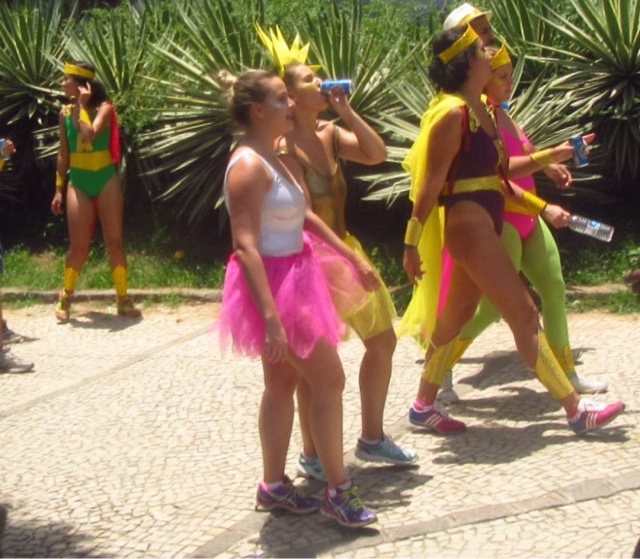 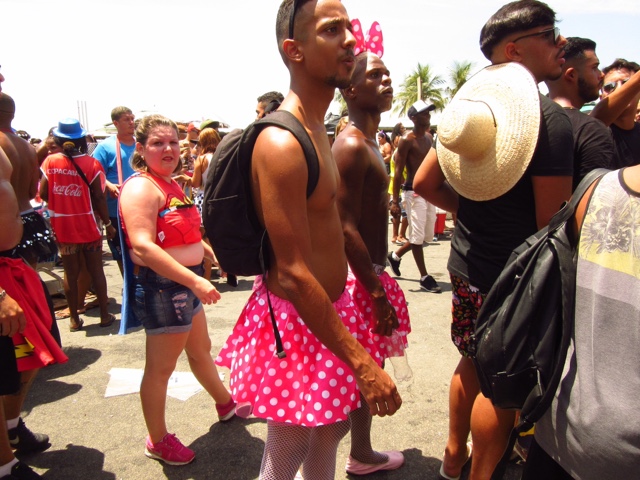 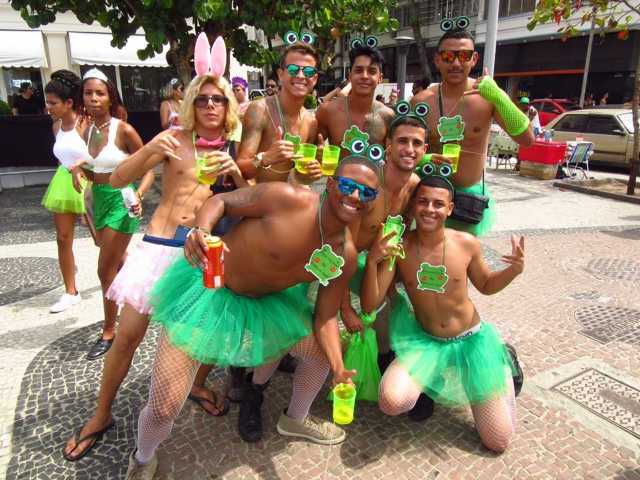 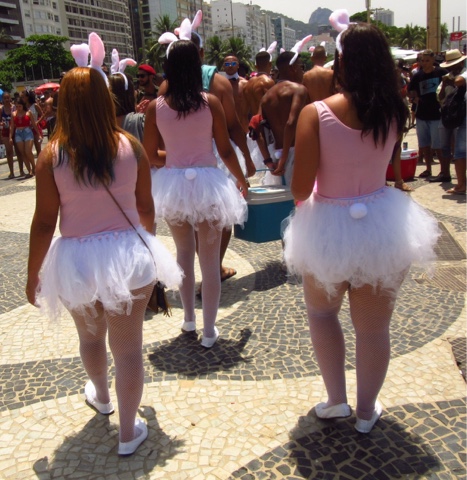 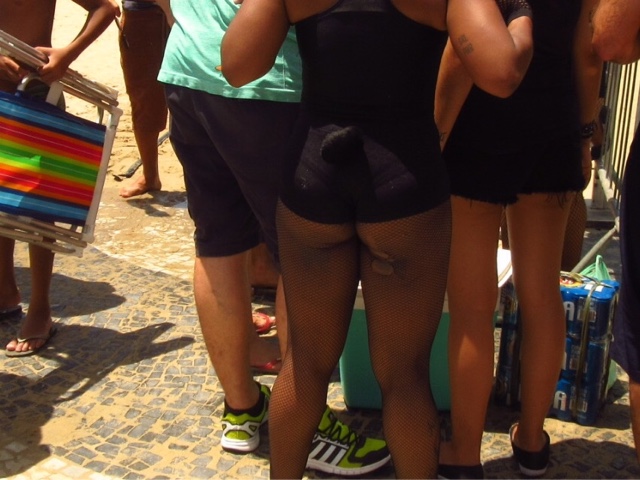 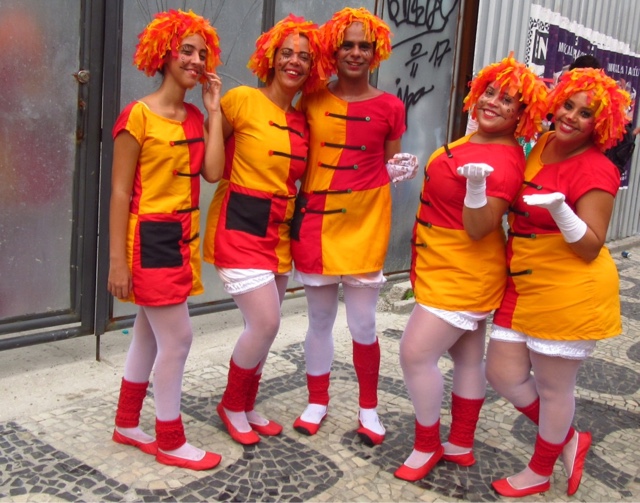 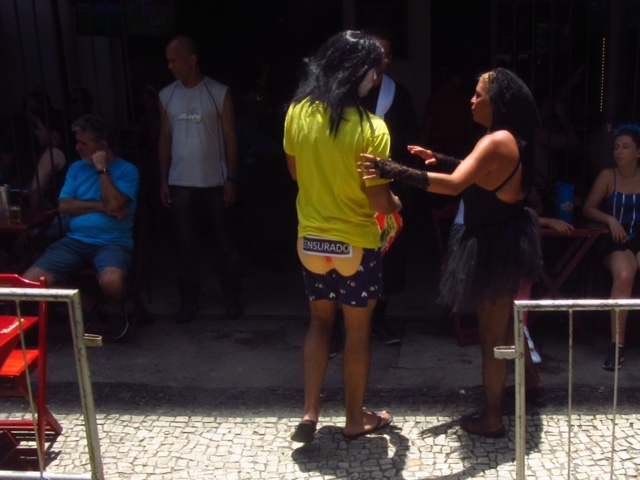 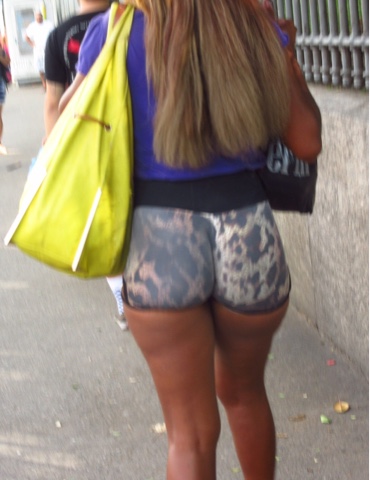 I haven't seen any women topless but their shorts are short and tight!
Cocacobana Beach is beautiful and in a way, I wish we were staying there, at least a night or two.  It is civilized after where we were this morning- 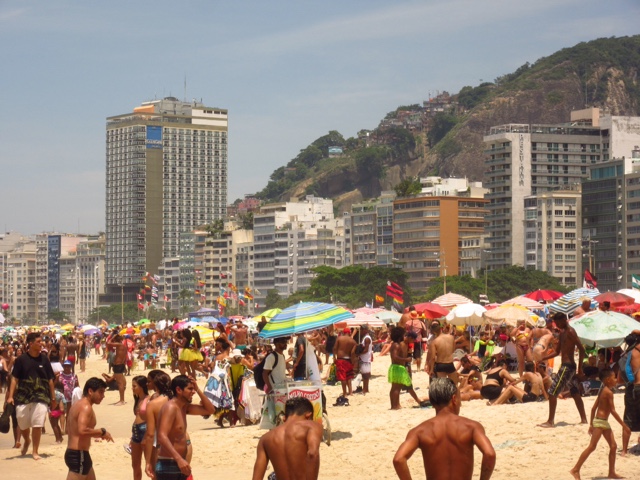 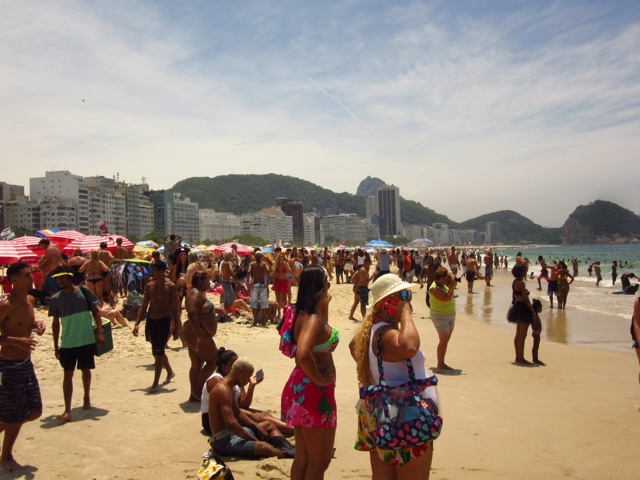 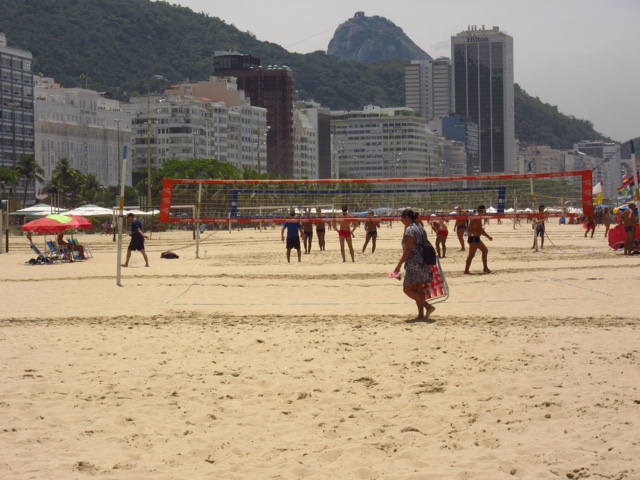 One thing I cannot believe they do is create paths to get from the street to the beach AND THE PEOPLE STAY ON THEM!!  The beach is also super clean - the people must respect it- 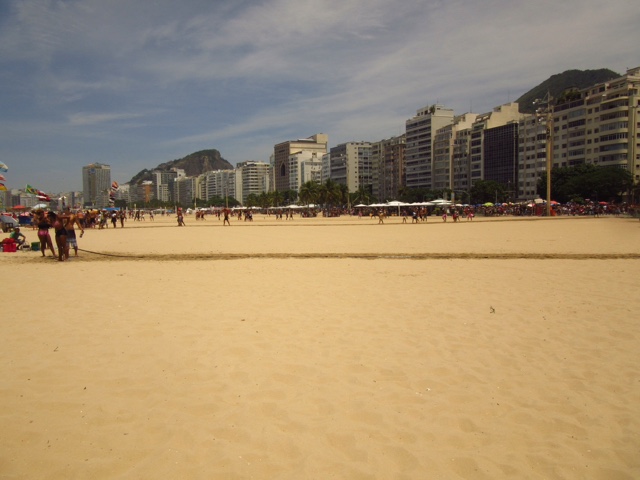 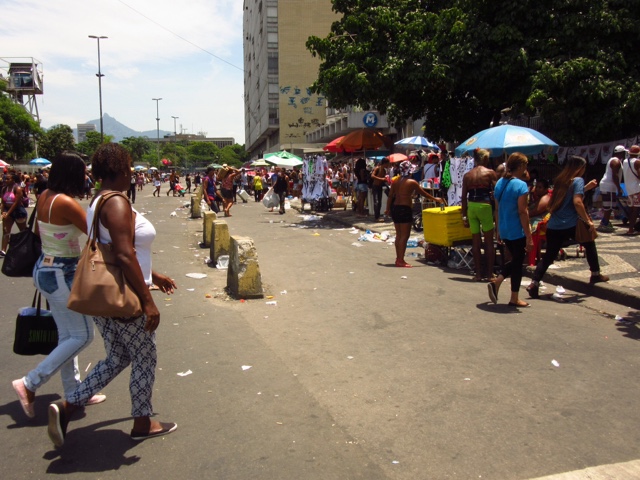 where they are selling all kinds of costume paraphernalia- 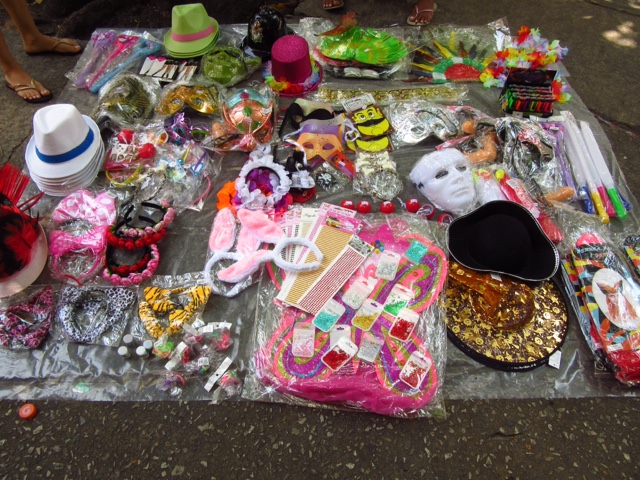 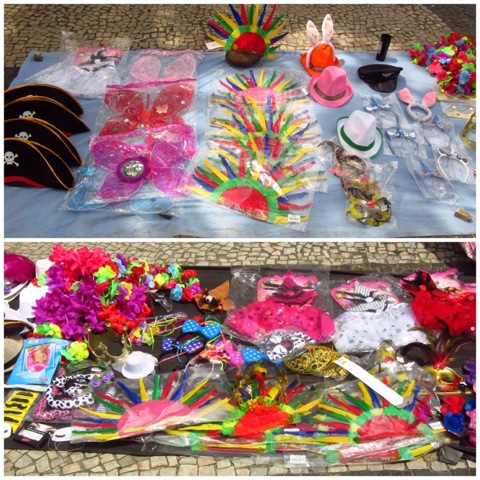 I caught the bus home and it was pretty much empty.  Along the way I saw the Arcos de Lapa.  The aqueduct dates back to the mid 1700s and were used to carry water from the Carioca River to downtown Rio.  The 42 arches are 64 meters high- 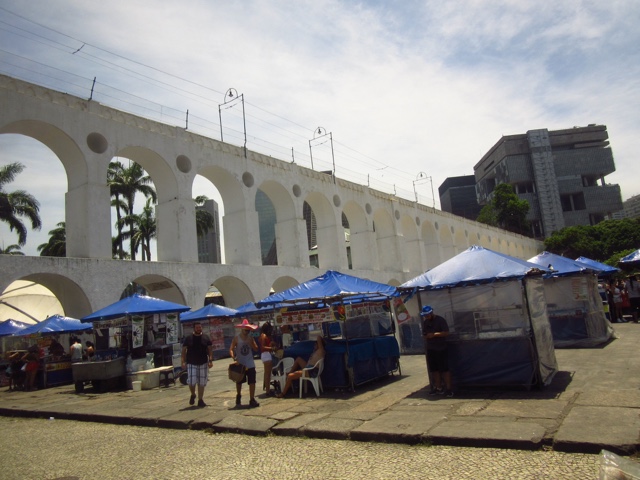 Back near our hotel, floats are lined up in the street- 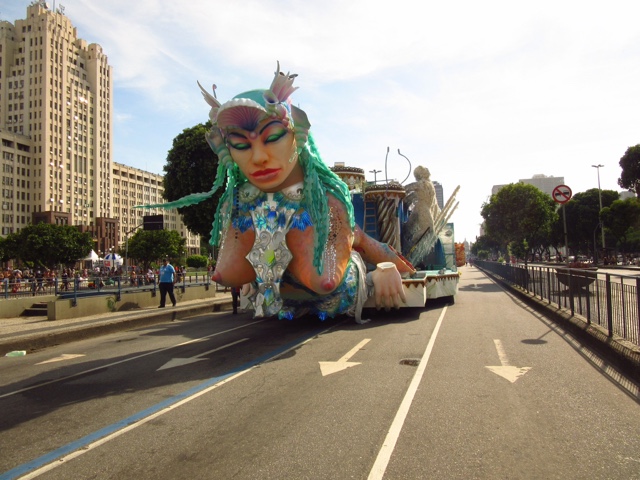 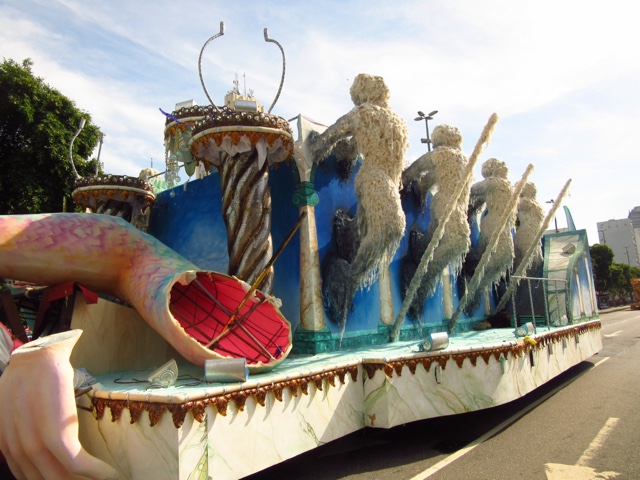 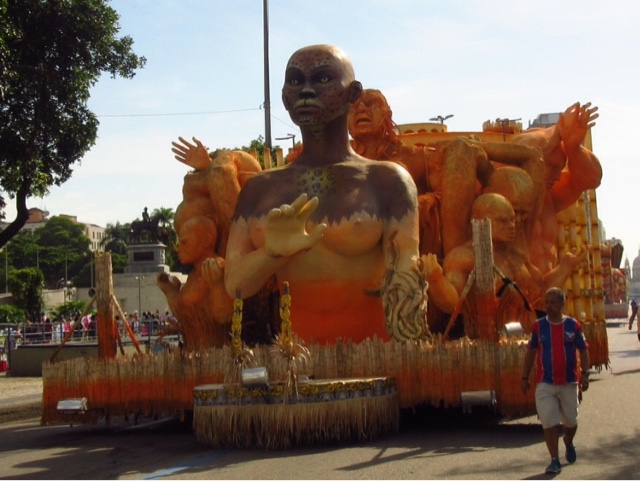 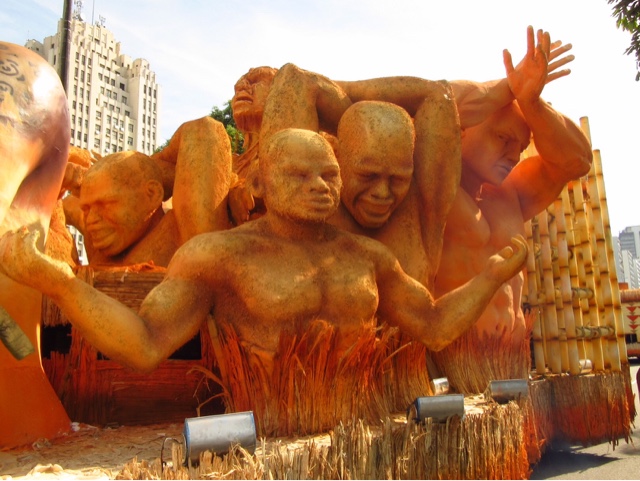 although no one seems to know when or where the parade is.  I hope they're heading to the Sambodrome which by the way starts at 10 pm and finishes around 4 or 5 am.  I am really glad we're staying so close because we can just walk home.  I can't imagine the metro and buses at that time of night and if they are even running.
After a short rest, we went for supper.  This man danced for us- 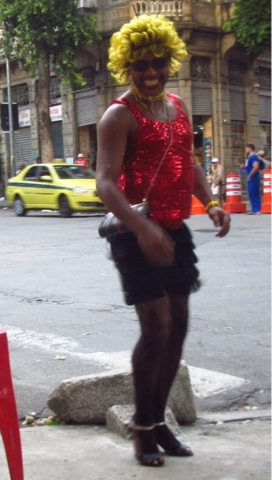 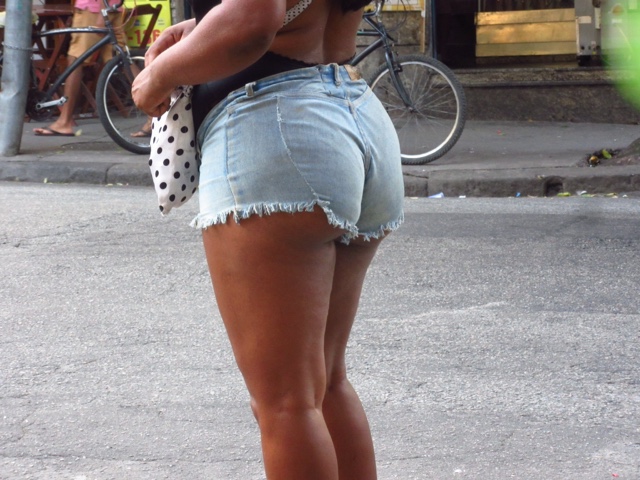 Garbage is everywhere and is picked up often.  For a pile like this, they throw down a tarp and throw the garbage onto it, then throw it in the truck.  How gross is that? 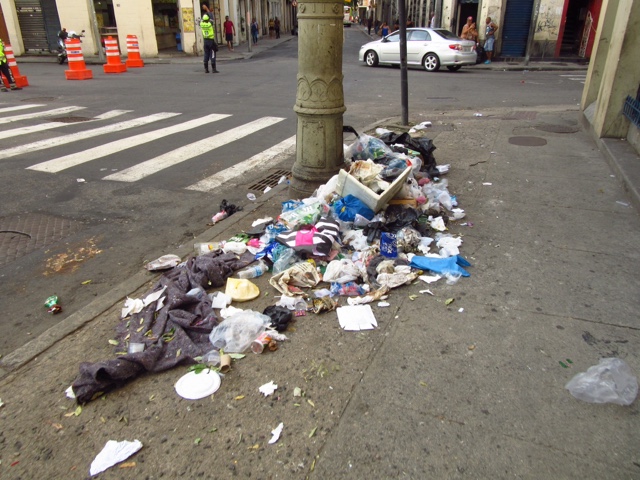 We left for the Sambodrome around 8, even though the show didn't start until 10.  I'm looking forward to the night!
at February 10, 2018