After a short sleep, we were on a city tour.  In 1502, Portuguese explorer Gonçalo Coelho entered a huge bay, thinking it was a river - hence the name "Rio".  He must have been here in January too. Portuguese settlement was gradual but by the 17th century, Rio was Brazil's third most important settlement after Salvador da Bahia and Recife-Olinda.  Many African slaves arrived and the sugar plantations thrived.  In the 18th century, it was the gold mines that drove the economy.  In 1807, Napoleon Bonaparte was about to invade Portugal so the prince regent and 15,000 others came here and liked it so much he named it the capital of the U.K. of Portugal and ruled from here.  In the 19th century, the population exploded with Europeans and ex-slaves.  Rio's golden age was from 1920-1950 as it was viewed as an exotic tourist destination.  In the 1960s, as the favellas (slums) grew, the city lost its romantic image as crime and violence increased.  In the last 10 years, thanks to the World Cup in 2014 and the Olympics in 2016, it's been revitalized.  Now, some favellas even have sewer, running water and a police presence!  The metro system expanded and new museums and cultural spaces were created.  I like it but it is a bit of a shithole, at least where we're staying.  Garbage is everywhere as are the homeless; sleeping on the sidewalks and in the parks near their huge and stuffed garbage bags.  Cocacobana however is beautiful with modern hotels and many shops and services.  Of course, it's more expensive but if I return, that's where I'll stay.
Our first stop was at Cocacobana Beach which looked much different from yesterday.  No one was there!  Also, people got tired of following the paths onto the beach and the whole beach was footprints!  While we waited for other group members to show up, I visited the fruit and vegetable market and did the veggies ever look fresh- 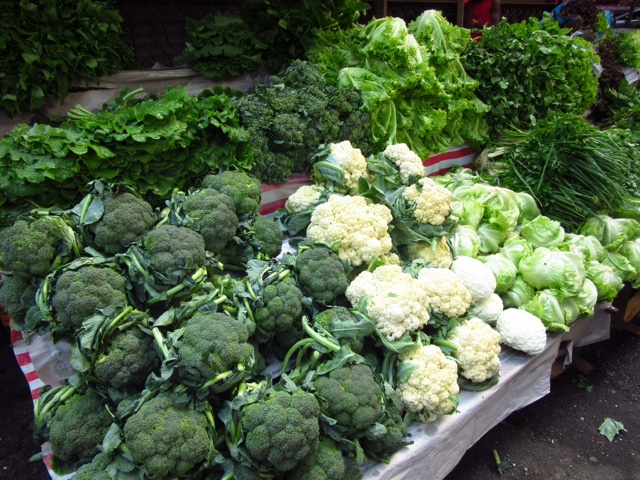 There were all kinds of chilis for sale- 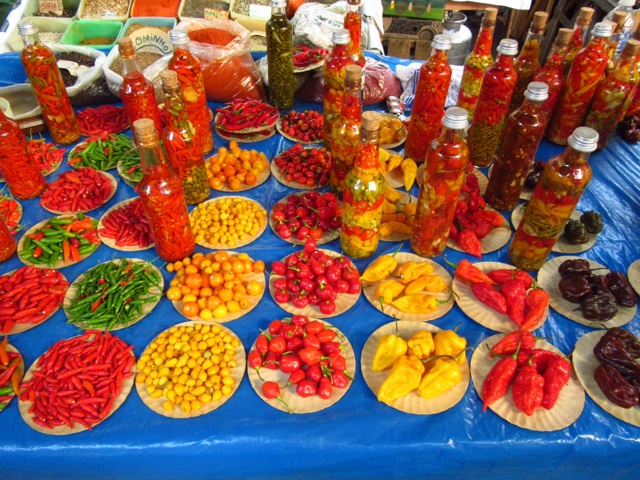 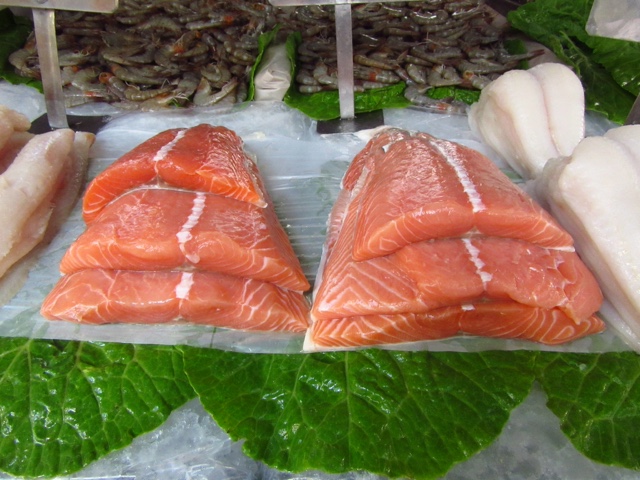 Parque da Tijuca is home to Cristo Redentor.  The statue was built to hide an antennae and today is one of the main tourist attractions of the city.  It was started in 1922 and finished in 1931.  It's 38 meters high and weighs 1145 tons.  It's a 29 meter spread from hand to hand- 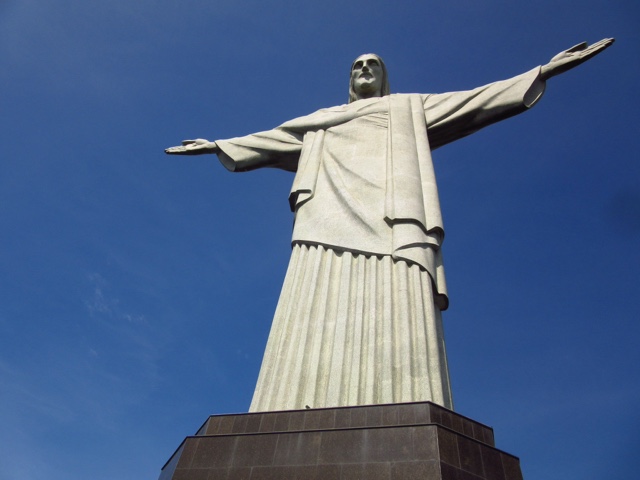 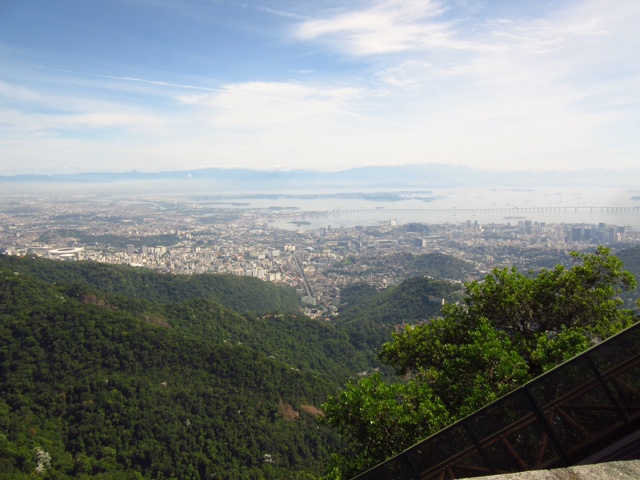 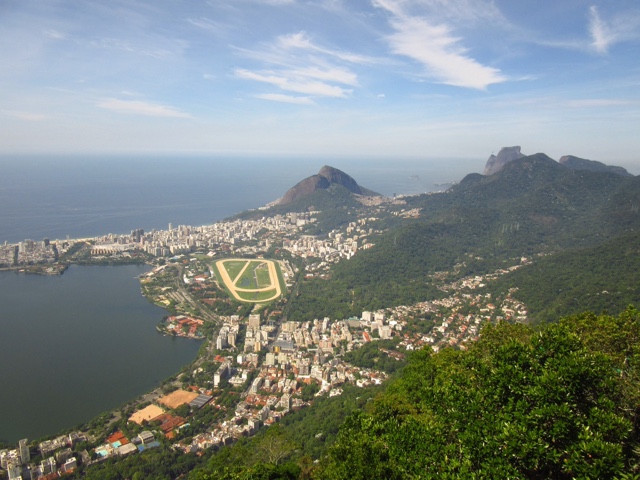 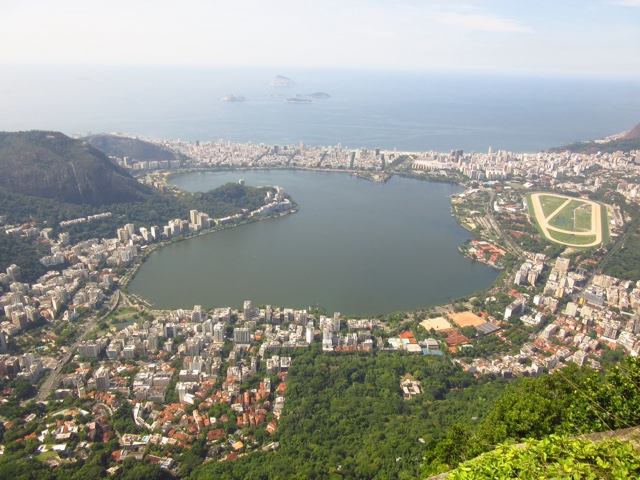 Santa Teresa is a barrio set on a hill overlooking the city.  The streets are cobbled and there is no rhyme or reason to their layout because they were getaway lanes used by the slaves to escape.  It's the place to be apparently.  The Bonde is the last streetcar in the city and adds to the Bohemianism of the district- 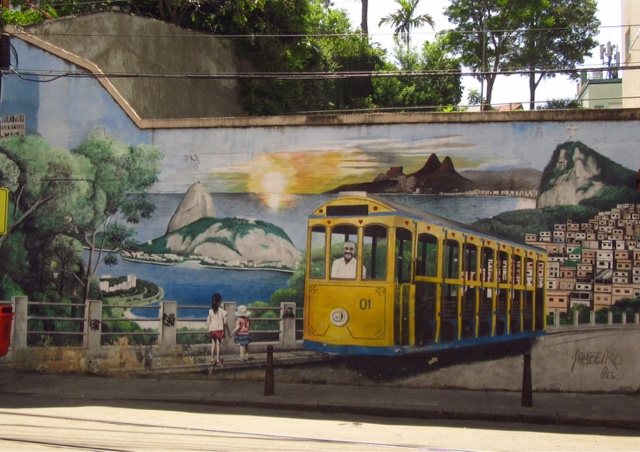 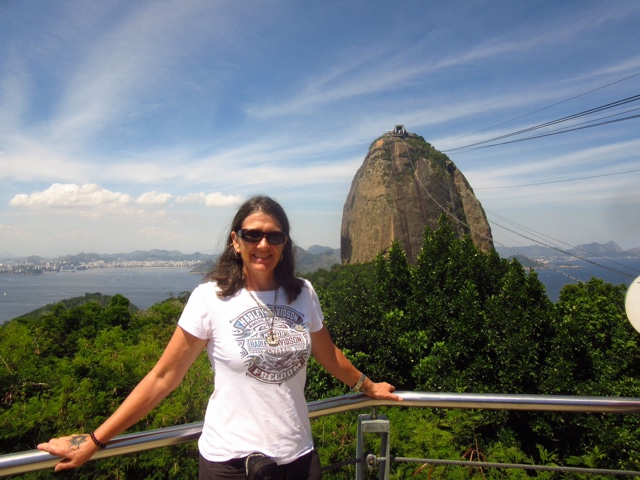 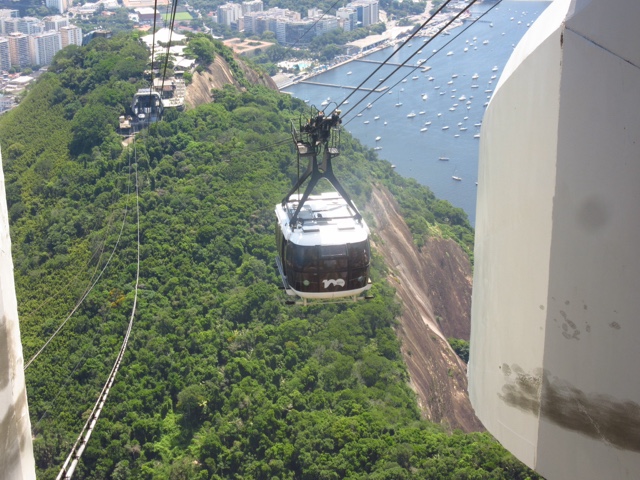 They hold 65 people and take 3 minutes to go 795 meters, travelling at 36 km/h.
The views are awesome:  Flamengo Beach- 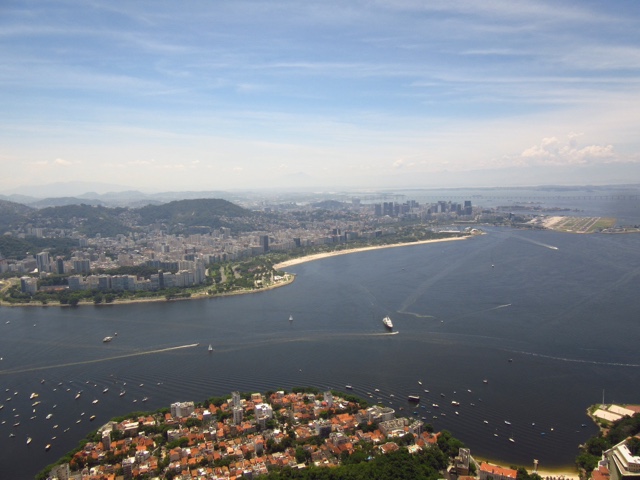 where there were quite a few sunbathers- 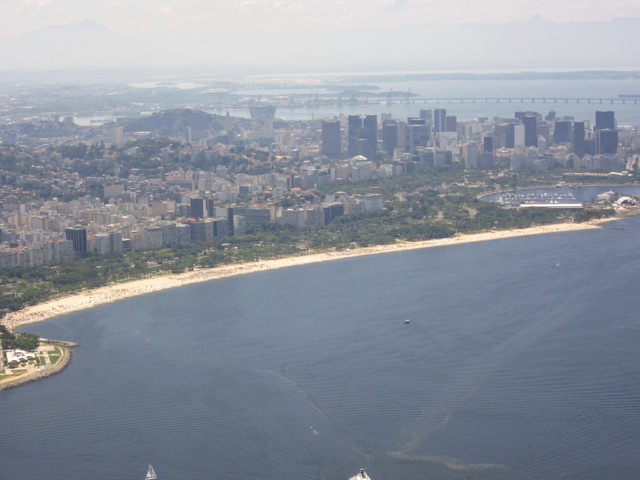 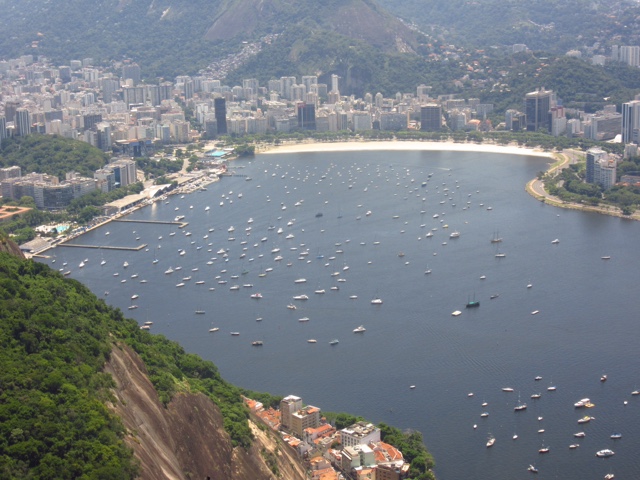 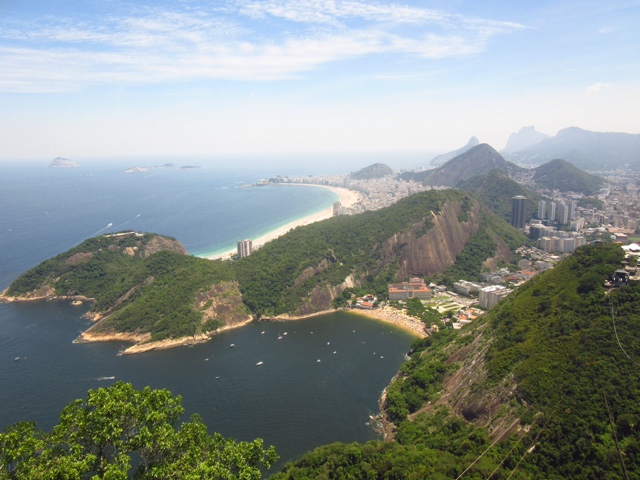 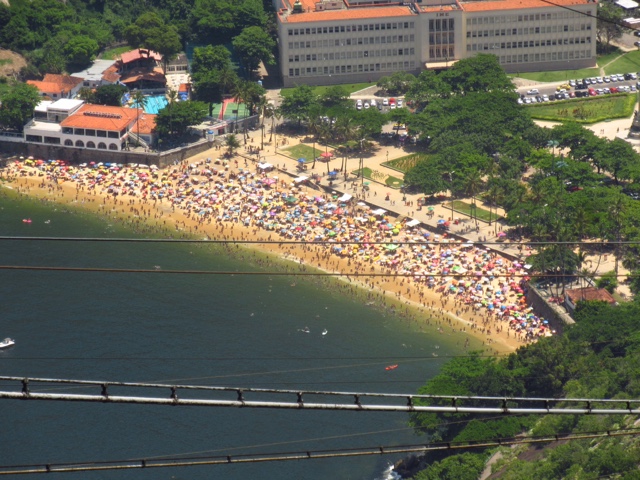 From here we went to see the Catedral Metropolitana but it's closed during Carnival.  There are 4 stained glass windows that stretch 60 meters to the ceiling.  It took 12 years to build and was inaugurated in 1976- 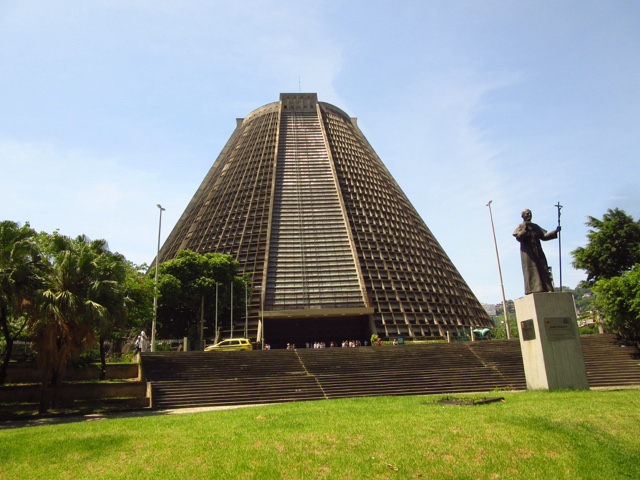 Escadaria Selaron was built by Jorge Selaron, a Chilean artist.  In 1990 he started covering the 215 steps in blue, green and yellow - the colors of Brazil's flag.  It's a work in progress- 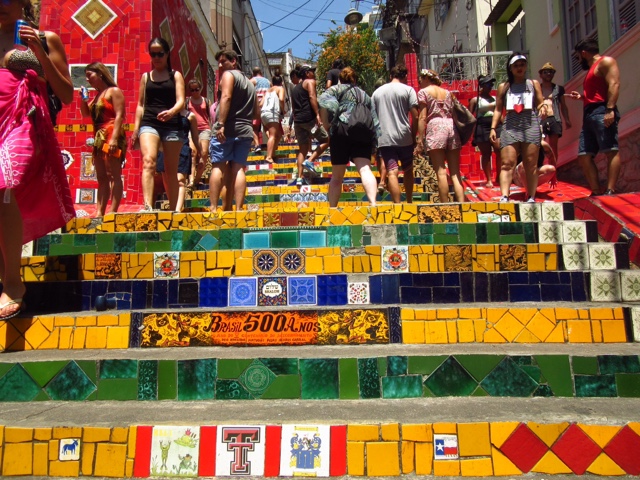 Later he started adding more colors.  It's a huge tourist attraction too - 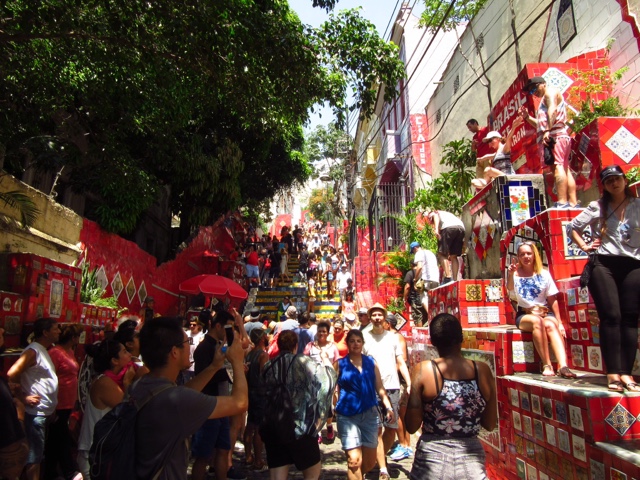 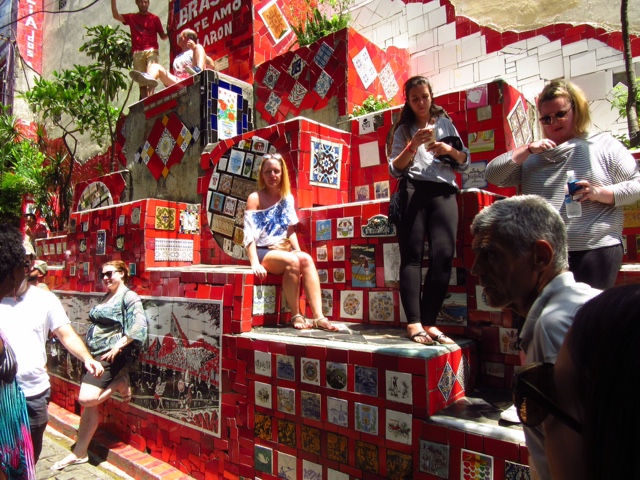 Of course there are drink and food stands nearby.  I had a Caipirinha for $2 and it must have had 3 ounces of cachaça in it- 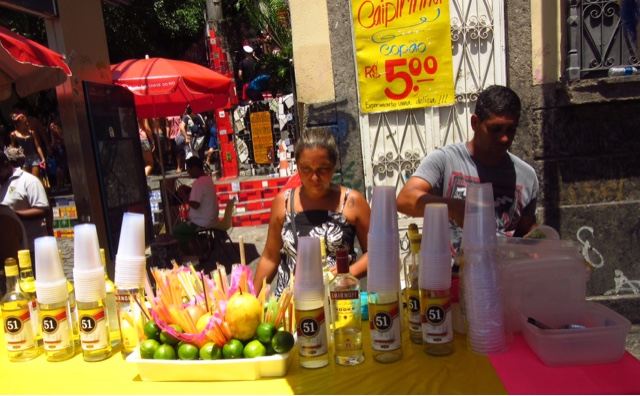 There's wall art nearby too.  There are a jumble of people's names displayed on the world map and it is in this area that Snoop Dogg shot the video "Beautiful"- 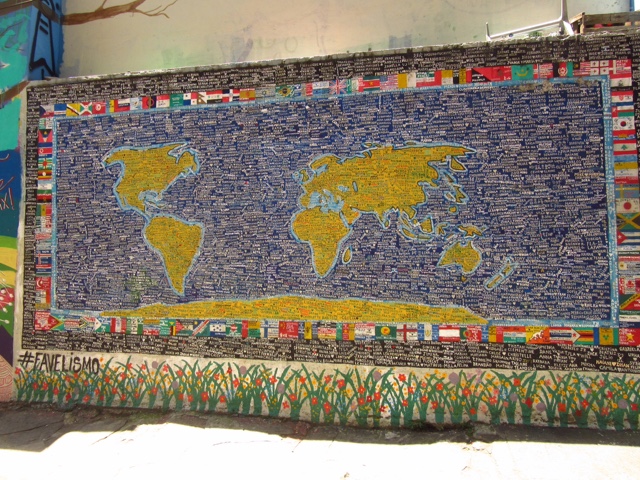 I love their household mail boxes.  There's a place for the newspaper and another for the letters.  It's often found on the gate along the sidewalk at the entrance to the home- 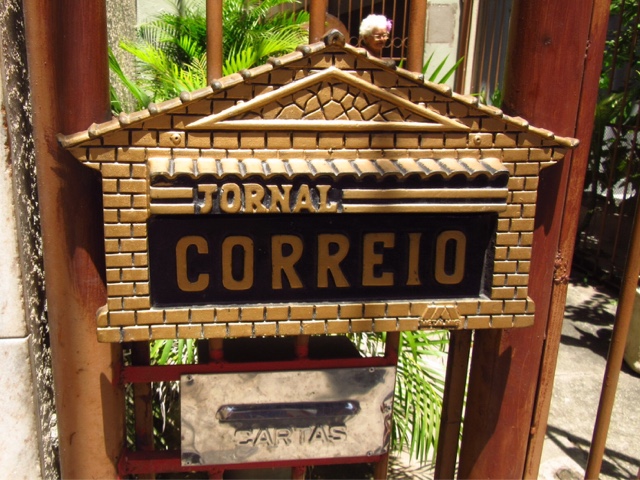 We got back to the hotel in time for a late lunch and ate at our favorite spot on the corner where there is great people watching.  We had an early night and aren't sure what we're going to do tomorrow.  Wiebke flies home at 6 pm.
at February 11, 2018