We had an almost dry night and were on the road early.  Unfortunately, the roads hadn't improved over night- 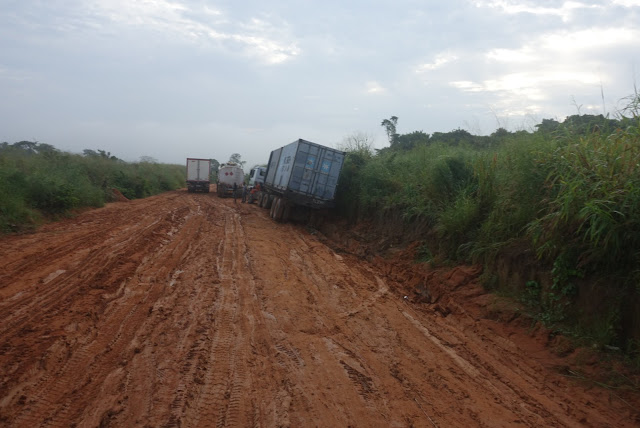 But we were luckier than some-

These boys were selling a Rock Python that they were holding with a fishhook through its throat.  It was still alive.  Will was feeling badly afterwards that he hadn't bought it and set it free but it would
have been caught again.  That's the thing here; there is no wildlife. It's all been eaten-

The sides of the road are either swamps or solid grass-

Villages in DRC are typical:  sometimes homes are made of wood but usually mud bricks, all with tin roofs.  Coal or peat is available for sale to burn -

Areas that need to be protected from animals, such as wells, are fenced-

Carrying on, the roads didn't improve-

I would not like to be here in rainy season but most people, if they have any form of transportation, use a motorcycle and with that, they weave all over following a narrow track.  Most people don't travel away from their village, but if they do they walk or take public transport-

The scenery continues to be jungle with nothing domestically planted.  Come on you people!  Get a garden growing-

Vehicles are loaded to the max-

Vehicles that wreck or break down are left, where ever, forever.  This truck was in the middle of the highway and has been here for what looks like ages.  Everyone just drives around it-

Arriving at Boma, we had our first sighting of the mighty Congo River-

We drove in to Boma, in search of a hotel that also allows camping.  Carrefour statues can be so weird-

After a couple of stops, we were led to Le Couvent des Soeurs where we could camp and they had 3 hot, stuffy rooms.  Next door was a cripple's hospital which is amazing when you remember where we are, and they had 3 rooms too, but as our negotiations progressed, it turned out they also had rooms with AC so I snagged one of them.  A few of us went to a Lebanese restaurant but it was less than average.  Oh well.  I thought I'd already learned the lesson that I shouldn't eat Western in Africa.