Today is Jane's shower and stagette.  Even though I can't be there, I'm thinking about her - lots! 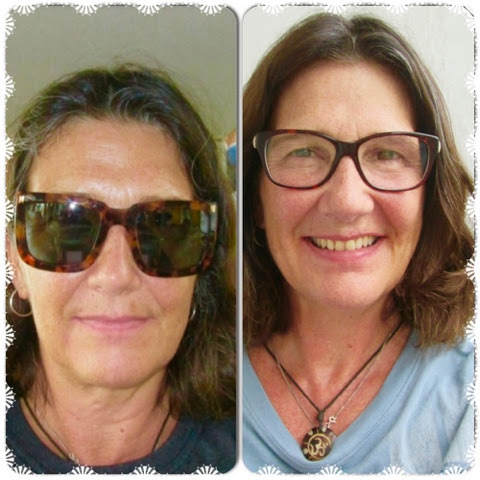 a new bracelet which "they say" is 925 silver but I've been told that before and very soon my who knows what it's made of bracelet was a yellowy brown looking mess!

and new shoes.  However, and there often seems to be a "however", I don't have the shoes!  I stopped into a shop around 7 last night, picked out two pair and was promised to have them by 10 last night.  She traced the outline of my feet on paper, measured across the instep and toes etc.  Well, she did show up at the hotel, but both pair needed adjustments.  The black flats were about one inch too big! and the straps on the sandals were too long.  So, she promised to return by 7 this morning as the bus was leaving at 7:30.  No show!  To make matters worse, I left the card to the store in the basket of the bicycle I rented last night and she kept the copies of the visa transaction.  I'm a bit worried.  However, while I was modelling the shoes last night in the hotel lobby, 2 Italian women came along and she gave them the address to her shop, so the hotel staff is going to check with them.  I've left my forwarding information with the hotel so I'm hoping the shoes will turn up at my Hue hotel and that they'll fit like a glove, a very comfortable glove!  :(

We haven't had the truck since Thailand - it's not allowed in these countries so we're on public transport.  This bus also has sleeper seats.  The 4 hour trip to Hue cost $7.50!  You can see a black box in front of the door- 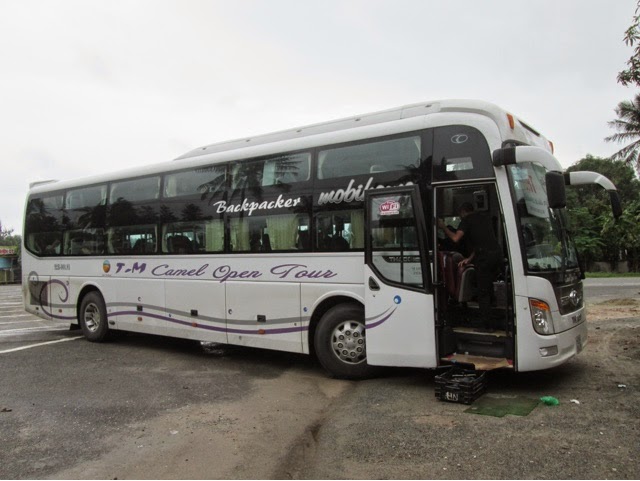 It's full of flip flops- 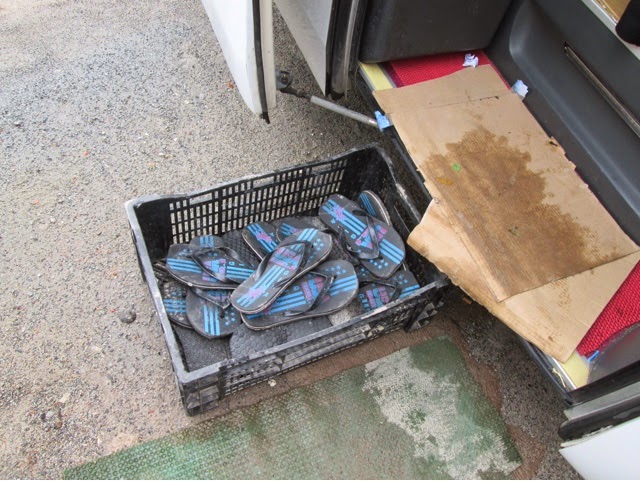 When you enter the bus, you have to remove your shoes and place them in a bag.  At our toilet stop, we weren't allowed to put on our own shoes but had to use those belonging to the bus!  Very strange!

It poured hard most of today so it was a good time to take advantage of an afternoon nap!

The Citadel is the main attraction in Hue.  It was built between 1804 and 1833 as the home of the royal family.   The Nguyen Dynasty ended here August 30, 1945 when Emperor Bao Dai abdicated to Ho Chi Minh.

The flag pole is 37m tall and the tallest in Vietnam- 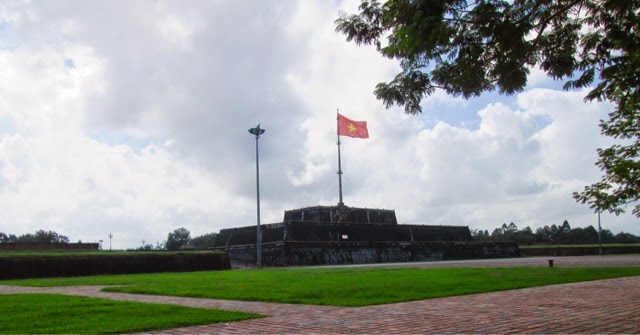 The Ngo Mon Gate faces the Flag Tower.  It's under construction, like many buildings inside because 128 were destroyed in the American war.  Only 20 remain, but they are busy restoring the site to its original beauty- 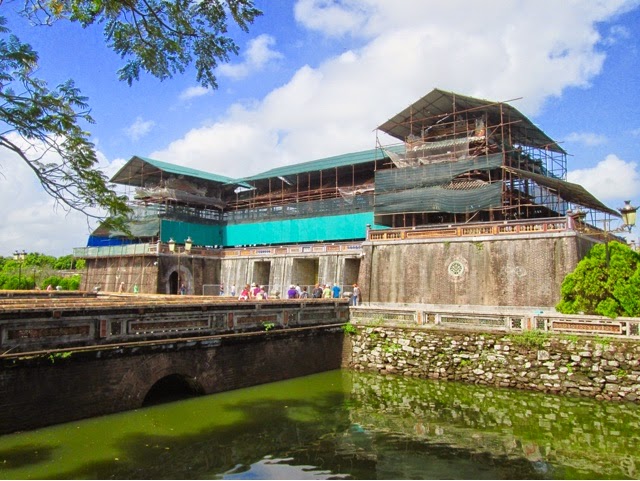 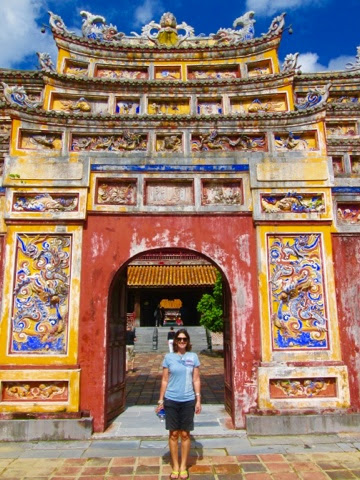 It was built between 1821 and 1822 as a memorial for the Nguyen emperors.  It was 13 meters high so no other buildngs could be taller- 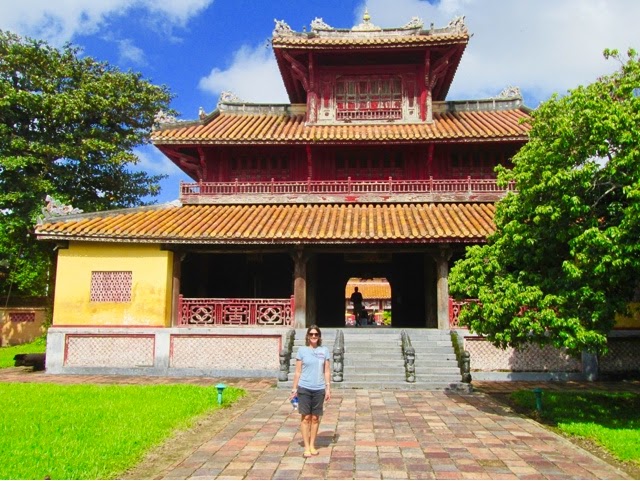 Musicians played five instruments, the oboe and drum being the most important, during the occupation of the palace.  Today they give concerts throughout the day- 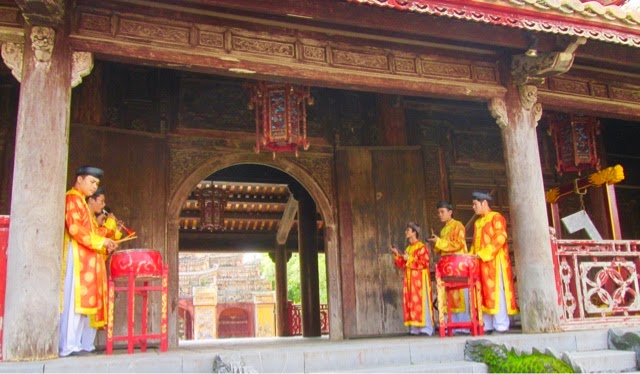 in the Royal Concert Hall- 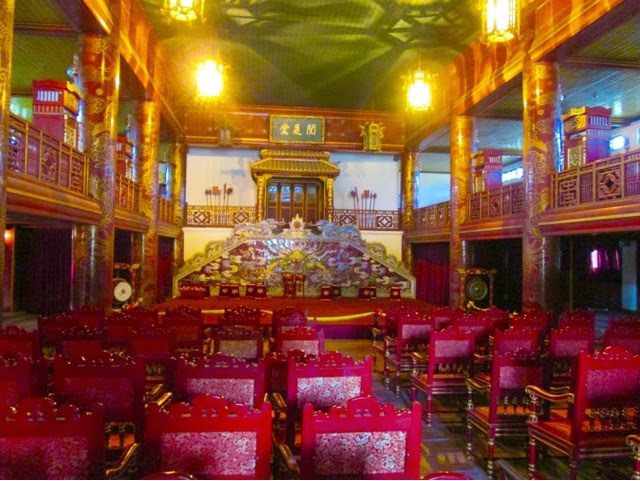 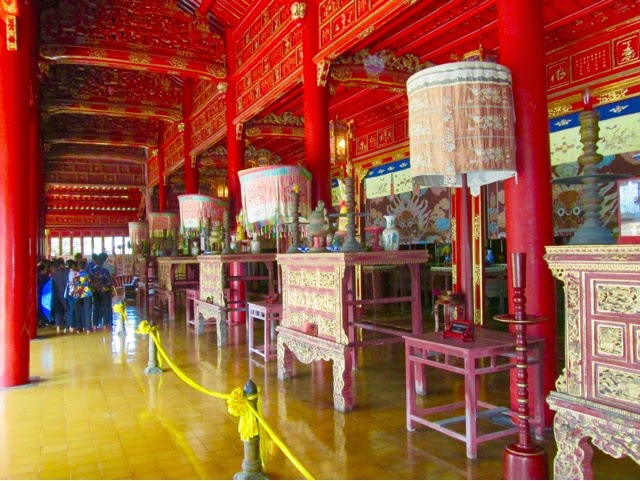 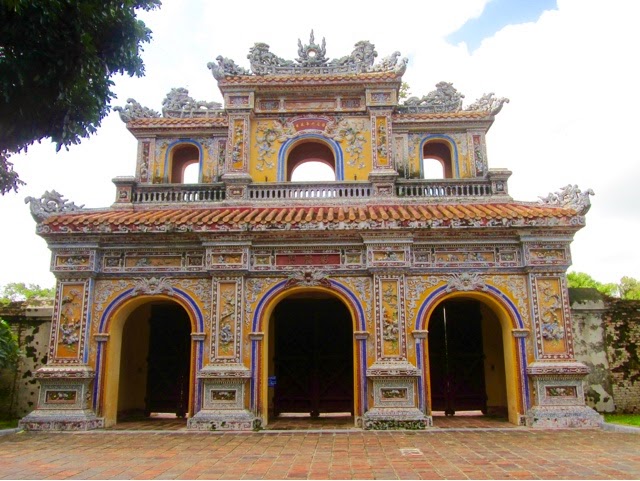 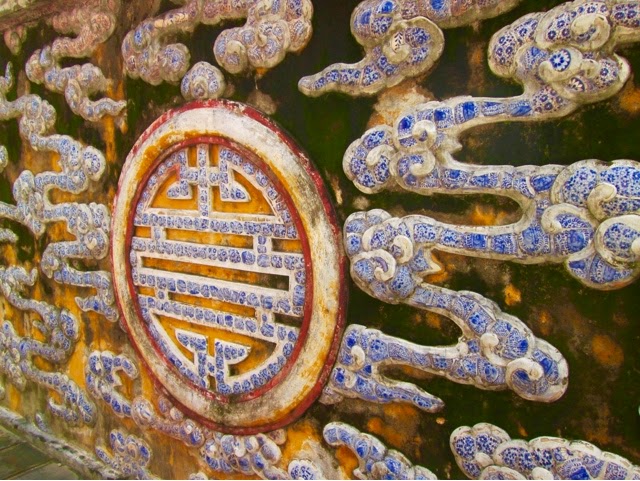 There are often dragons at the entrances to buildings.  They are associated with water and yin energy. 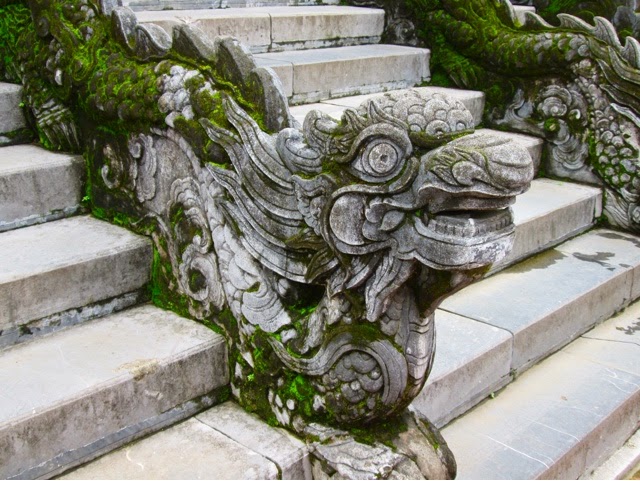 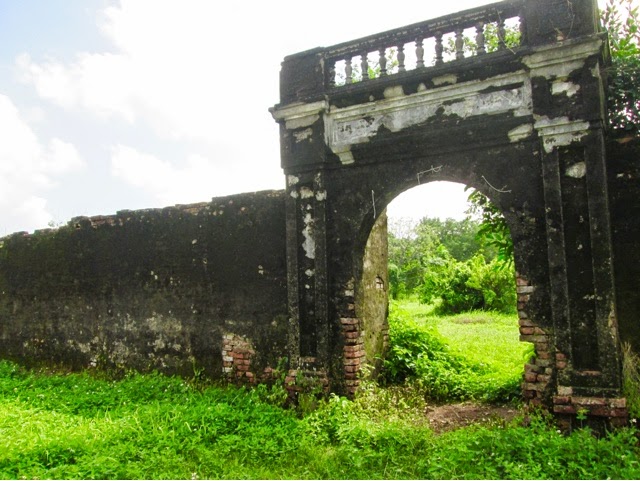 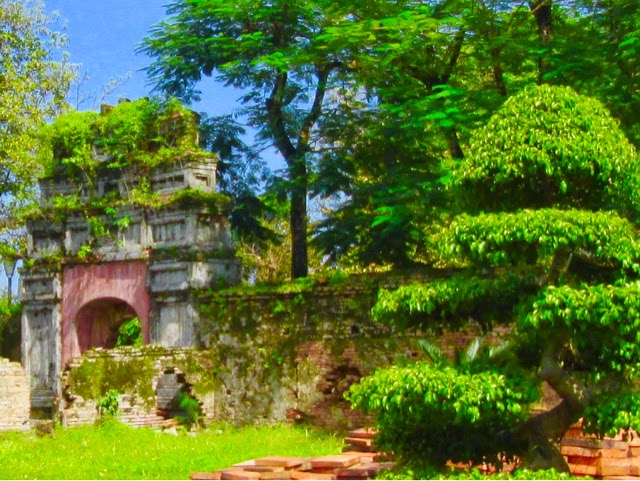 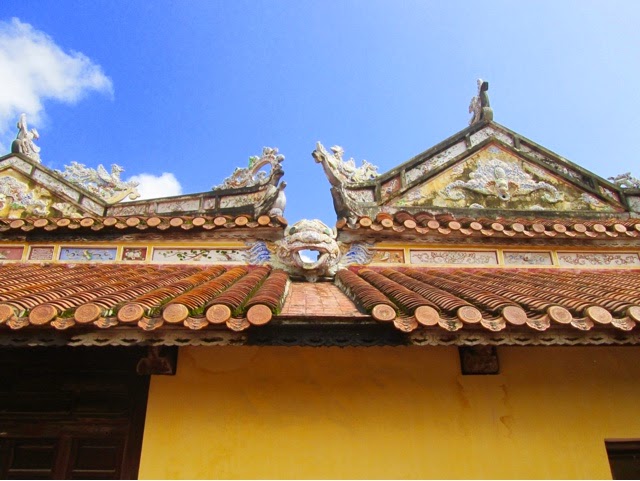 The Dien Tho Palace was built in 1804 as the residence for the Queen Mothers. 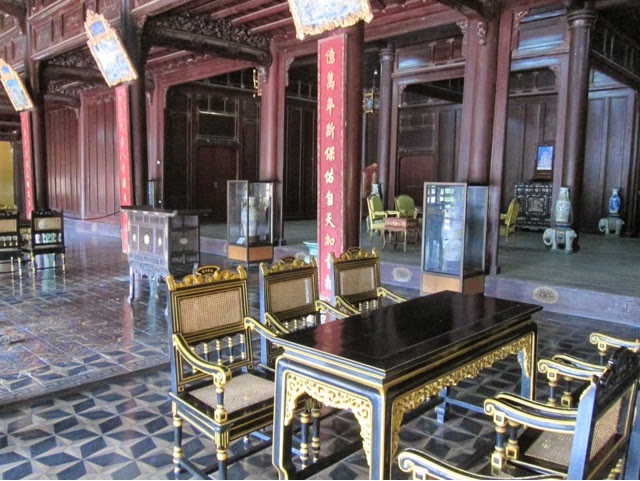 The Ta Tra building was used as a guest hall for those waiting to visit the Queen Mother. 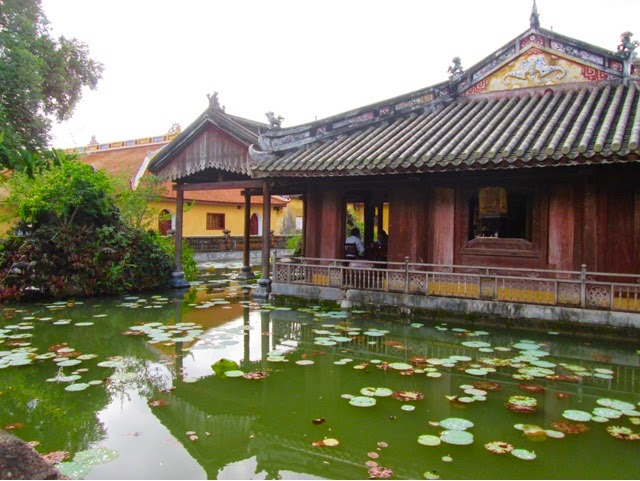 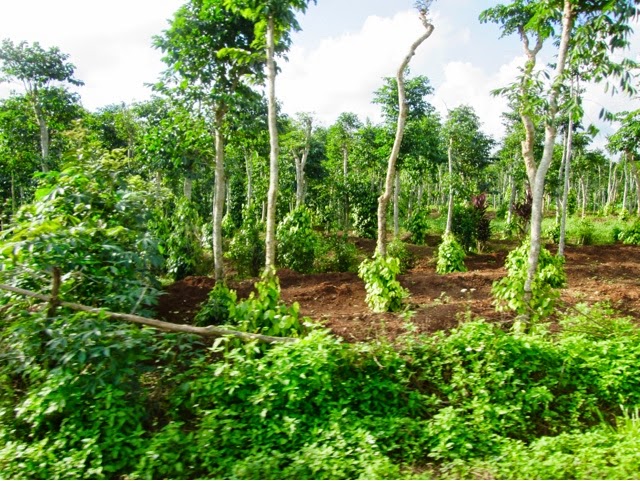 Along the way, we stopped at the Vinh Moc tunnels. 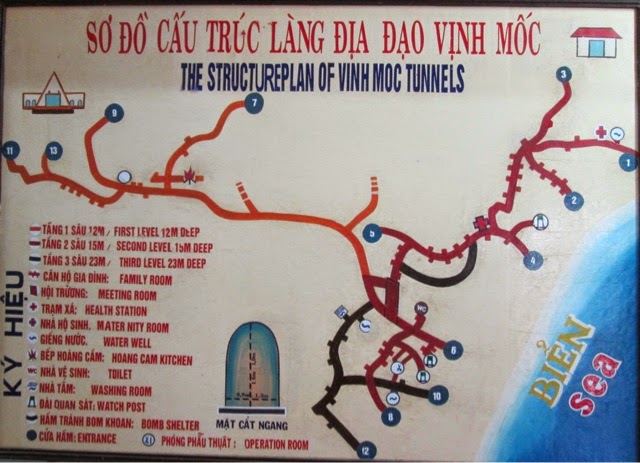 They were dug close to the DMZ (demilitarized zone) which is on the 17th parallel, on the north side, between North and South Vietnam.  They were used to shelter civilians from the continual bombing in this particular area.  The Americans thought the people of Vinh Moc were giving food and guns to the North Vietnamese.  This interfered with the bombing of Hanoi.  The U.S. also thought they were smuggling Viet Cong troops into the south, via the tunnels.  First, the villagers moved their village 10 meters underground, then 30.  They started in 1966 and used the tunnels until 1972. 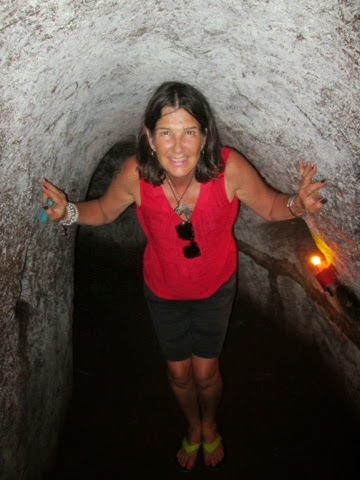 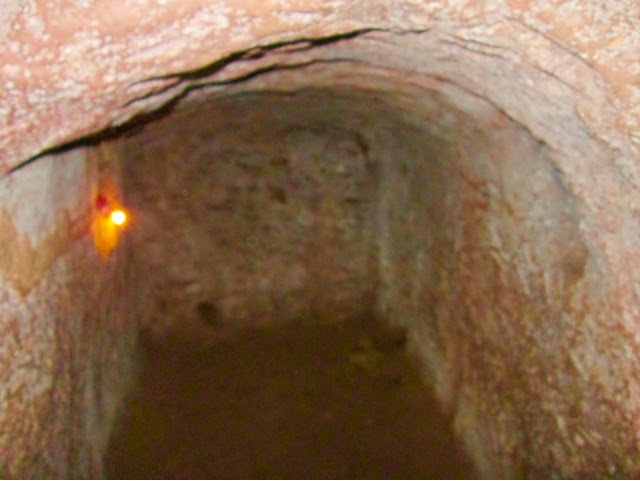 17 children were born inside- 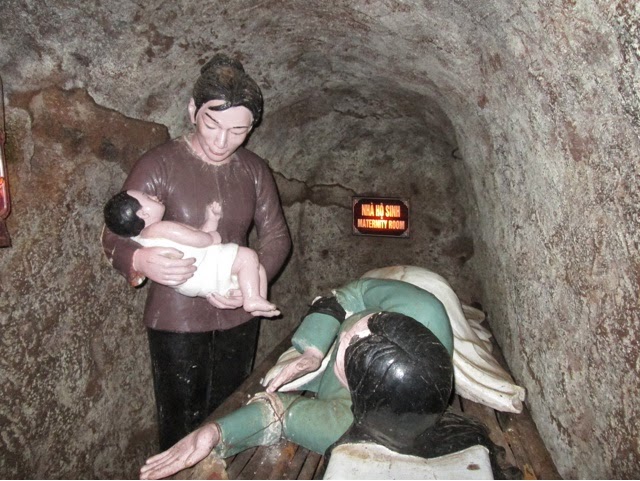