Copan Ruinas is where Maya people lived between A.D. 400-800 in what is now Honduras.  The most extensive hieroglyphic writings and elaborate sculptures in the Maya world are found here.
It's also where macaws from Macaw Mountain are released into the wild to hopefully reproduce successfully- 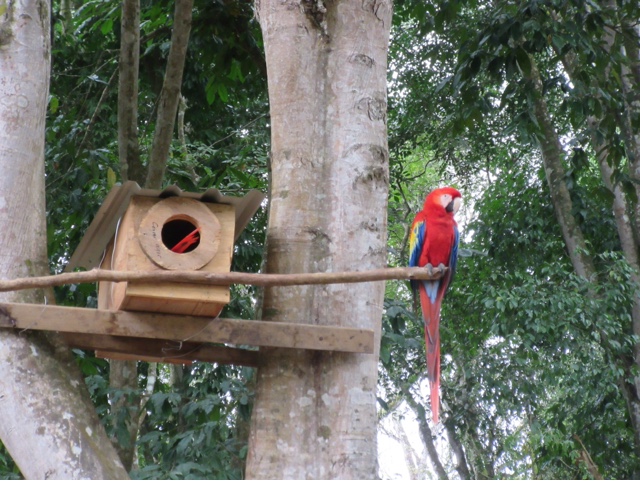 The site isn't very large and can easily be explored in an hour. 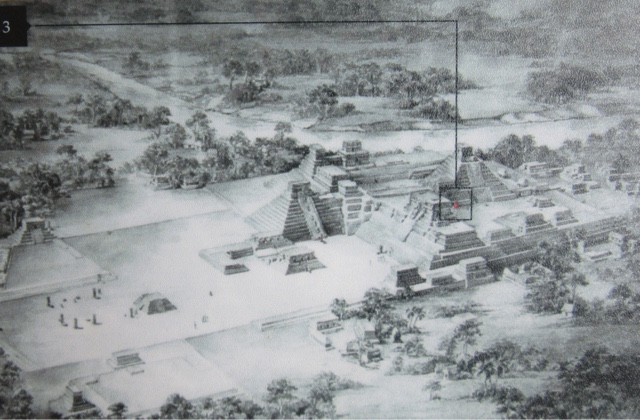 The Grand Plaza was a meeting place for up to 6000 people.  It was paved in white limestone- 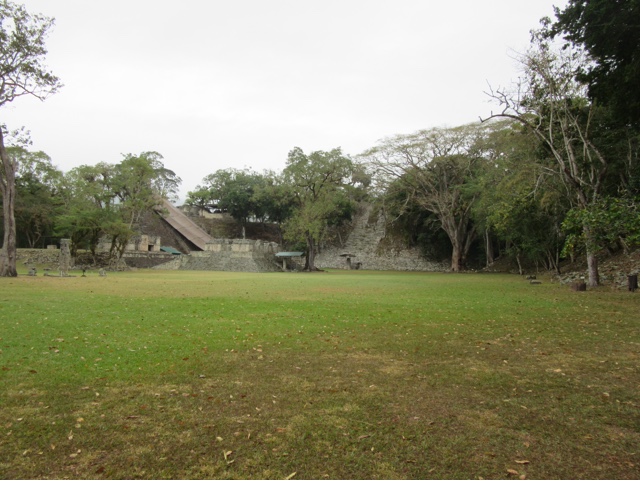 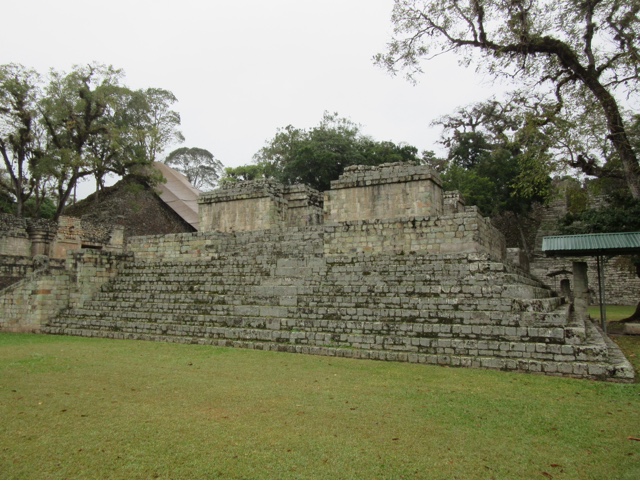 Stela A from the Grand Plaza was dedicated in 731 A.D. and portrays the 13th ruler (of 16), Waxaklajun Ubaah K'awiil.  He's carrying a two headed snake bar that is symbolically giving birth to sun deities- 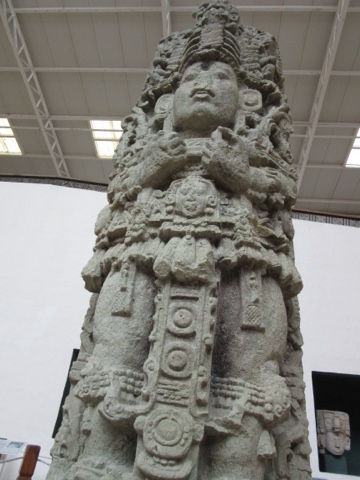 -
In the headdress is a woven mat design with four snakes in the corners.  It represents his central position in relation to the sun and the four directions- 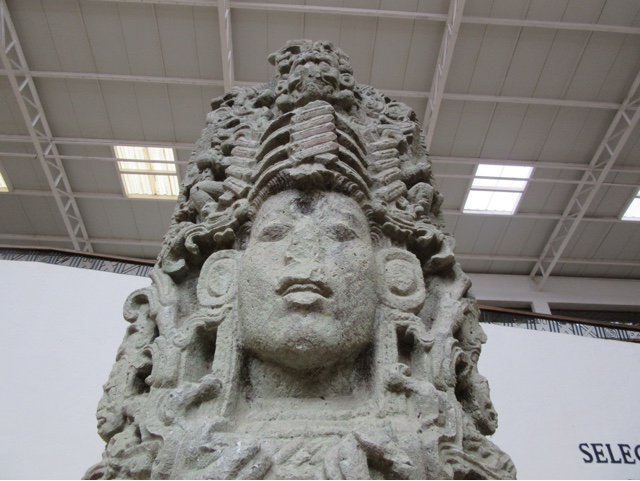 There are very few original pieces on the grounds.  Most of the originals are in the museum on the same site.  I loved the museum! 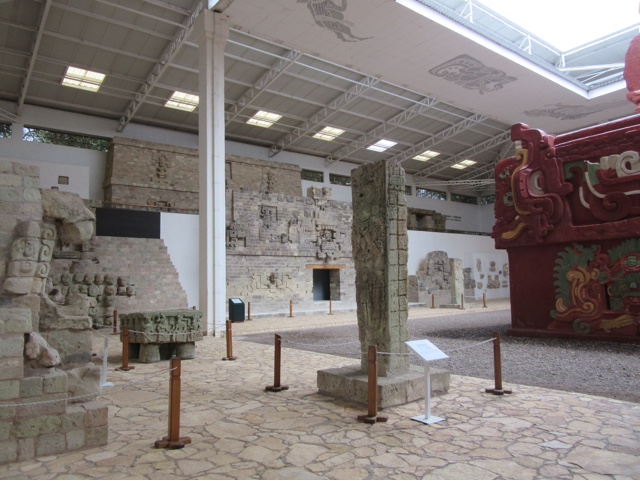 A stela is a large stone shaft usually carved on all four sides.  They show portraits of different rulers and the hieroglyphics explain the historical events during the life of the ruler.  Usually the inscription of the stela starts with the date the monument was dedicated.
Stela P shows the 11th ruler K'ahk ' Uti ' Chan who reigned from 578-628 A.D.  He is wearing royal clothes- 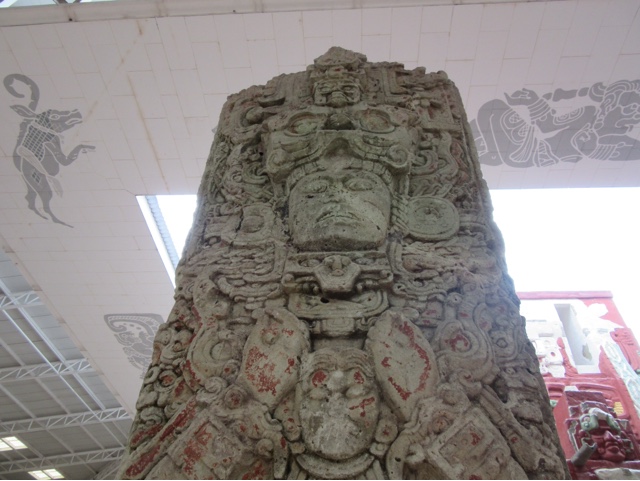 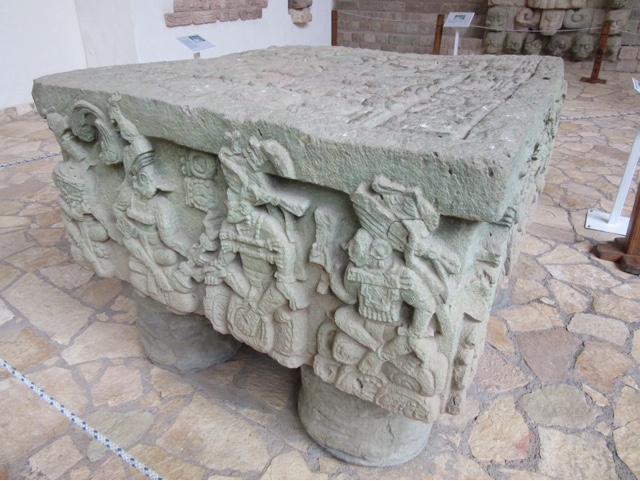 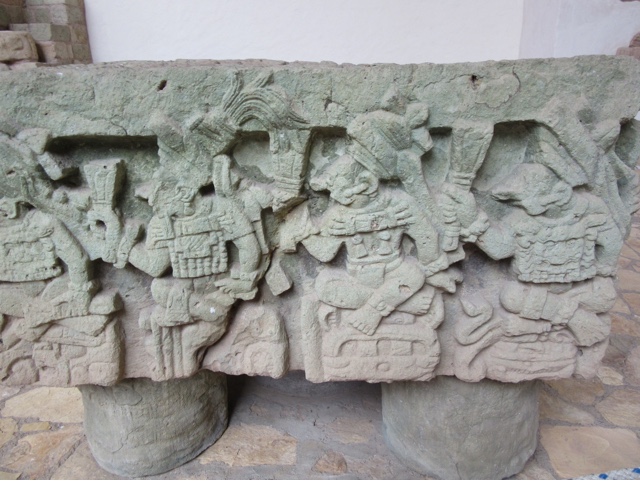 The Hieroglyphic Stairway has 8th century inscriptions and is the longest writing in ancient America, explaining 4 centuries of Copan dynasty.  It was rediscovered and excavated at the end of the 19th century but only the bottom 15 steps were found in their original position.  The rest were reconstructed in 1937-1940.  In the 1970s, people were no longer allowed to walk on the stairs where there are more than 2000 hieroglyphics on 63 steps- 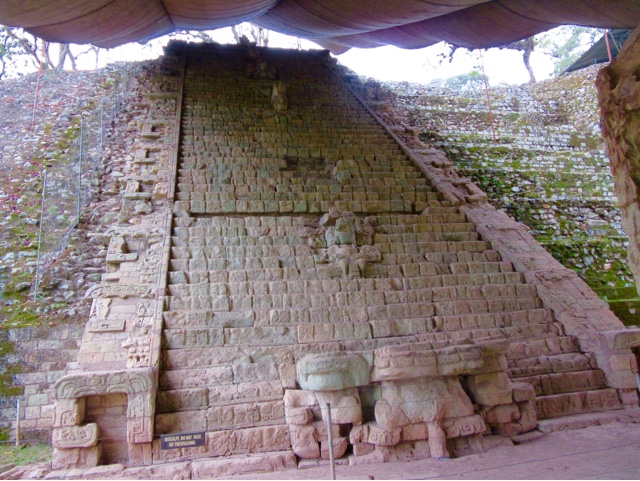 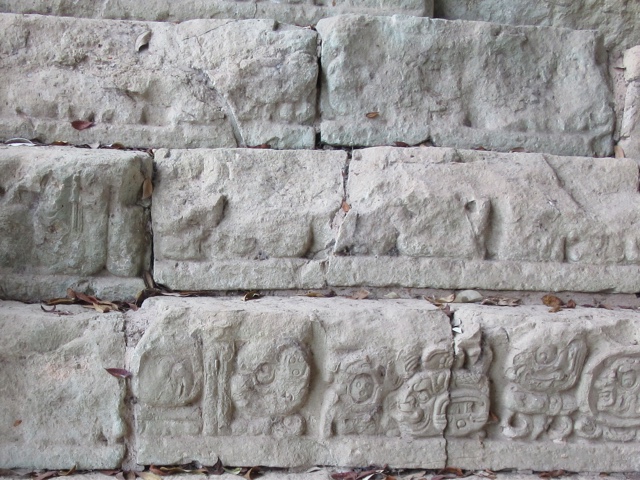 The cornerstone for Copan has the earliest hieroglyphic inscription known at the site.  It was found under the Hieroglyphic Stairway in 1993.  There are 2 seated rulers on opposite halves.  The ruler on the left is the first ruler in the dynasty - K'inich Yax K' uk ' Mo.  The ruler on the right is his son, who became the second ruler- 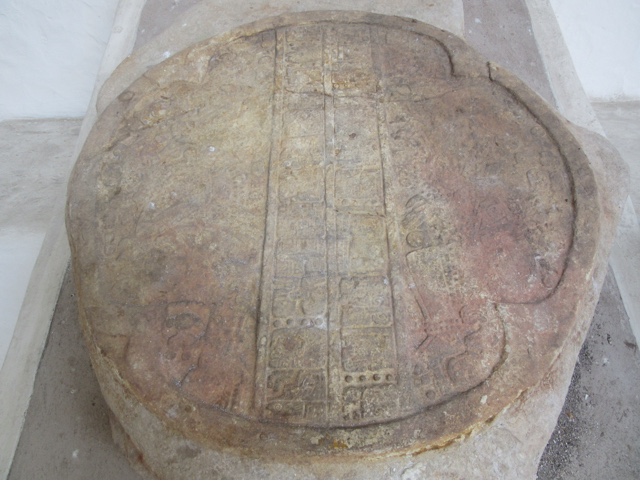 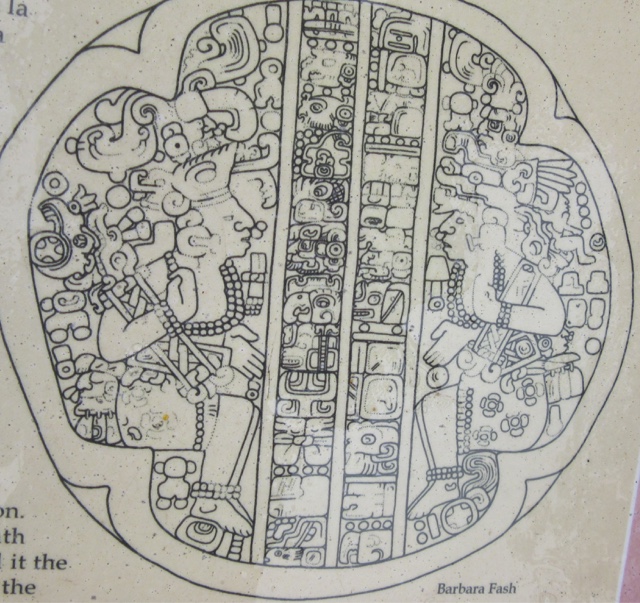 The view from the top of Temple 11 as imagined- 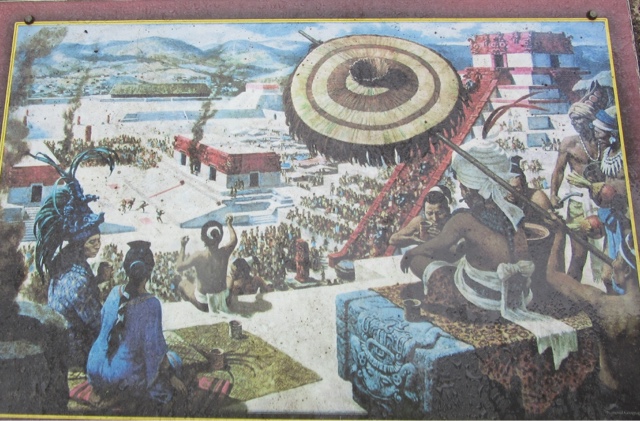 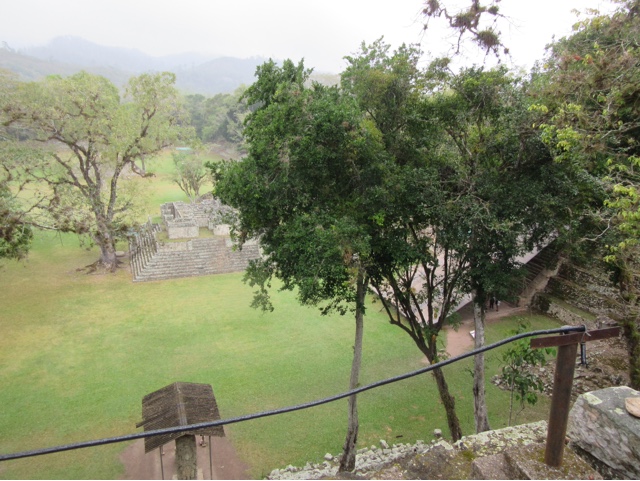 The Toothless Old Man of Copan is the head of one of two giant Pawahtuuns from either end of Temple 11.  They once held a mosaic crocodile that stretched across the temple facade.  The headdress is a knotted water lily, a symbol of fertility- 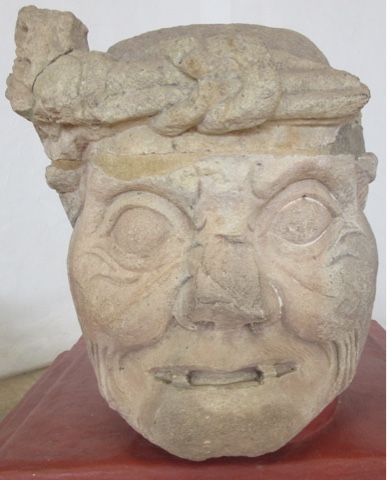 A collection of heads found in various places at the site- 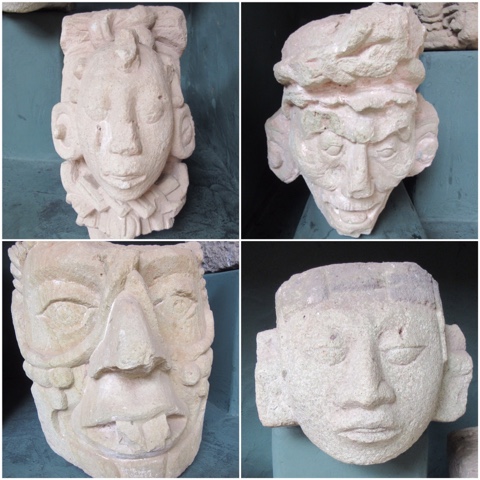 One of the earliest full round sculptures was discovered in 1990 in a tunnel.  Red pigment covered the body and this meant he was a creation from the watery "other world".  The head was purposefully removed to destroy the figure's supernatural powers- 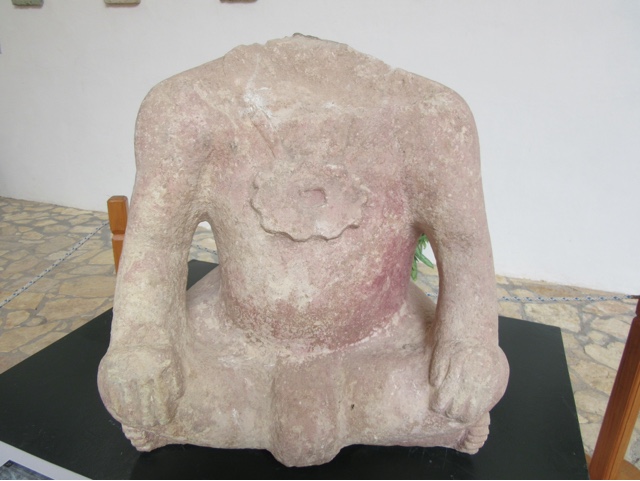 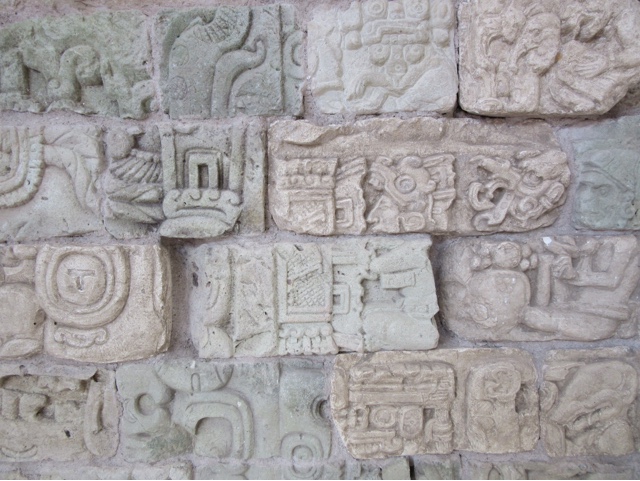 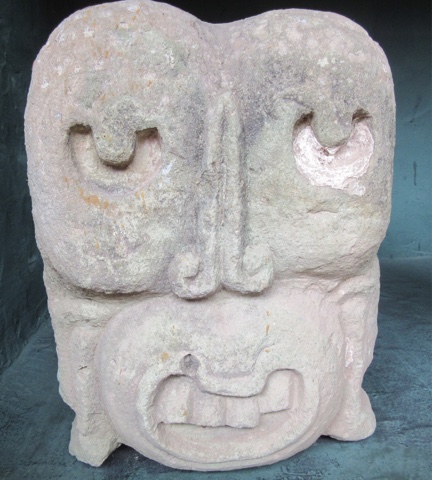 The view from the top- 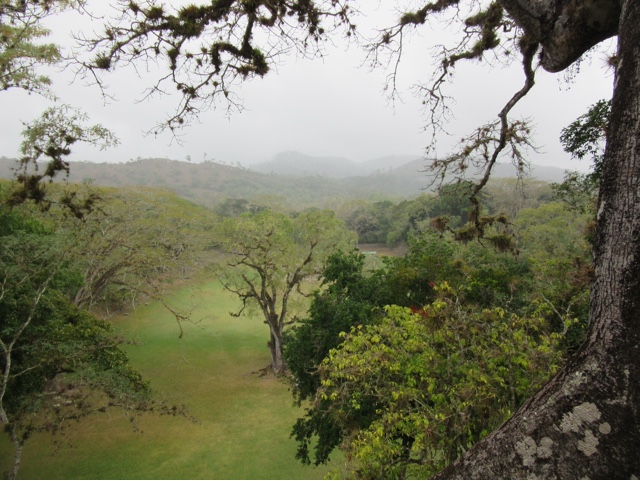 The Maya only lived here 400 years.  Perhaps they ran out of resources, depleted the fertility of the land, became diseased or fought amongst themselves.  It's not clear why the site was abandonned.
I enjoyed my visit here more than Tikal and Caracol but I think I've seen enough ruins for awhile, maybe for the rest of my life!
Good news for tomorrow!  I don't have to take 4 chicken buses to San Salvador leaving at 6:45 am! Rather than spend 11+ hours riding collectivos, I'm going in a modern van - direct and not leaving until noon.  It costs $40 US, rather than $25, but is going to be sooo worth it!
at February 05, 2017