I was awake at 4 and at the bus station by 5:30.  One bus left for Copan Ruinas at 6 and a directo left at 8.  I thought rather than sit at the station for 2 hours, I may as well get on the 6 o'clock bus.  It just about drove me crazy!  I only had to change buses once but the stopping and starting and hollering was non stop.  There are 2 workers: the driver and the hustler.  The hustler hollers out the side door trying to drum up customers.  He gets up on the roof to strap down luggage, moves people around inside, collects money and helps people in and out.  No wonder they are so skinny!
Finally in Copan Ruinas, I found my hotel, or at least what I thought was my hotel.  I'm staying in a brand new place, certainly not what I booked!  There are two hotels with the same name and the manager said it's no problem where I am so I'm not going to complain!  I have my own bathroom again!
Lunch was at a steak place.  My hors d'oeuvre was interesting!  One slice of toasted baguette- 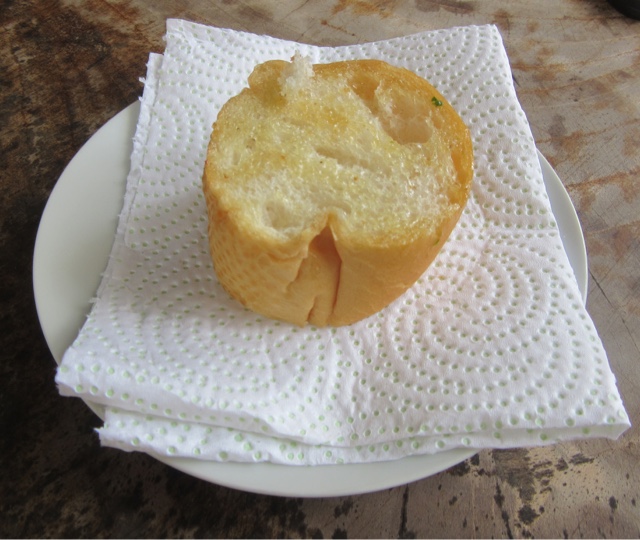 I paid $19.54 for a huge filet that was unfortunately too tough for me but probably would have been perfect for most meat lovers.  They didn't ask me how I wanted it cooked -medium rare must be standard in Honduras- 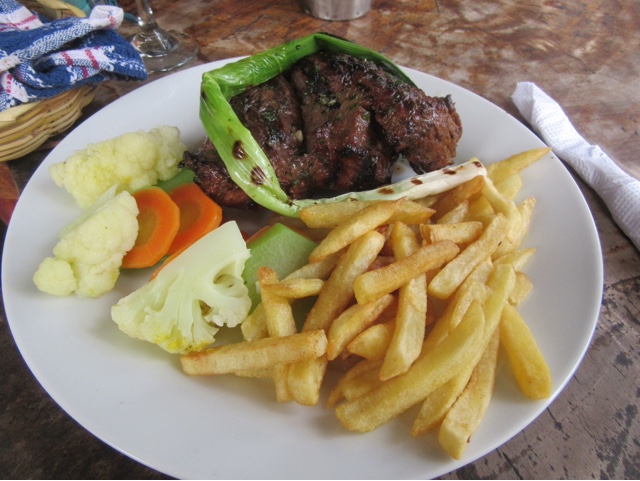 Copan Ruinas and this area of Honduras is cowboy country.  Most men wear cowboy hats and pointy boots and there are lots of cattle and horses around.  I wouldn't want to use this saddle though- 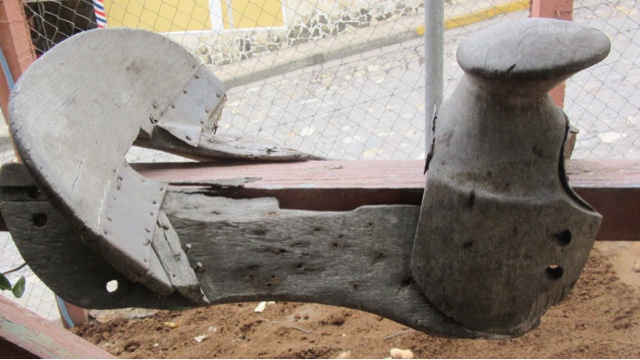 I'm saving the Ruinas for tomorrow so visited Macaw Mountain this afternoon.  It's a rehabilitation sanctuary for birds native to this area.  Presently they have about 260 birds, 80% are injured or recuperating from idiots who didn't know how to look after them and decided to give them up rather than kill them and 20% have been born here.  The goal is to someday release them back into the wild but it's a long process.  They have 26-30 species.  All birds pull their feathers out when they are stressed so a lot that they get are naked, at least from the neck down!
The White Fronted Amazon can say 8-20 words but they are only repeated.  They really don't know what they're saying- 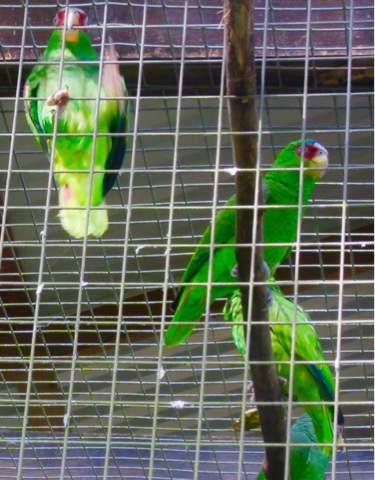 Scarlet Macaws are monogamous so when one dies, they no longer reproduce.  They too imitate 5-30 words and are highly endangered.  Males and females look identical and their sex can only be determined by DNA but of course they know what they are!  They live to be 70-90 years old!  It takes 3 months to incubate their eggs and a baby grows 10% of an adult's size/day!  They usually only incubate one or two eggs, even though they might lay 4-6. Babies #1 and #2 are released after a year but it takes 6 years to get a Baby #3 healthy enough to release.  Eggs are usually laid 2 days apart so they also hatch 2 days apart.  By the time Baby #2 is born, Baby #1 is 20% the size of an adult.  By the time Baby #3 is born, Baby #1 is half the size of an adult and requires a lot of food and room in the nest- 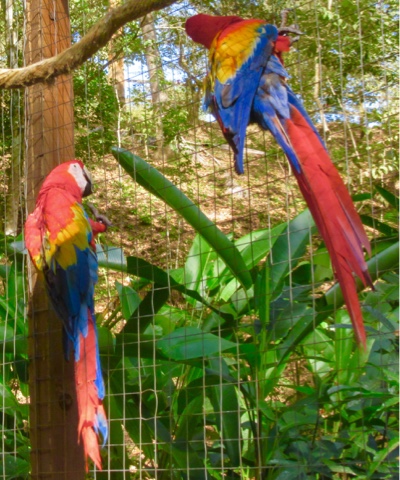 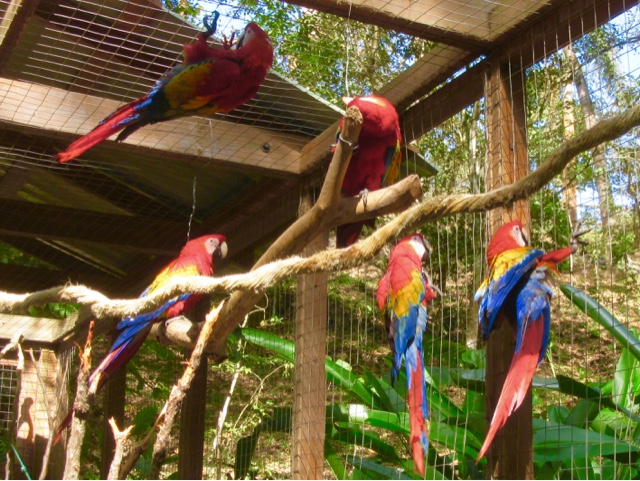 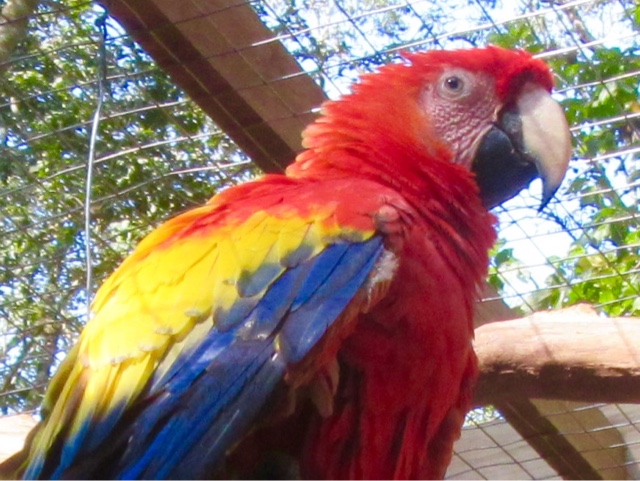 The Green Macaw, like all macaws, should only eat fruit.  Bird seed gives them cholesterol problems and causes other health issues- 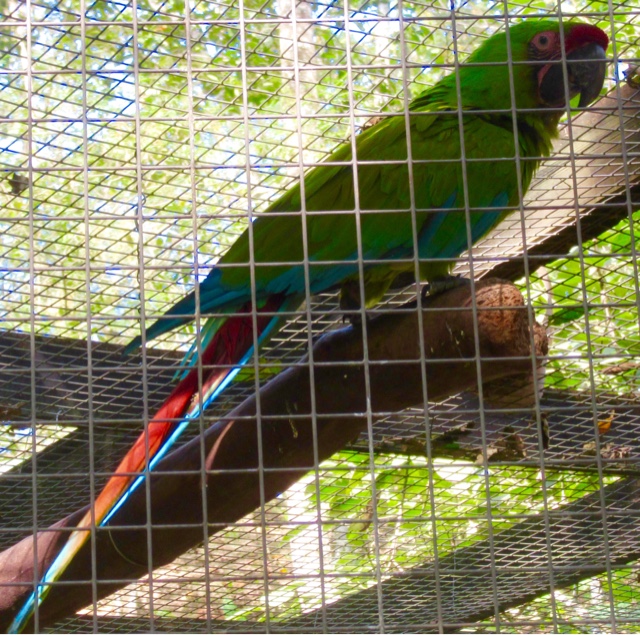 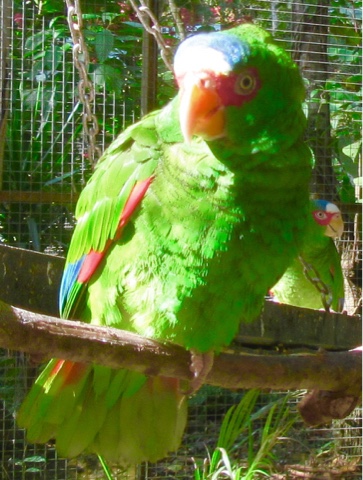 The King Vulture has a wingspan of 1.94 m and weighs up to 14 kg.  They are solitary carnivores- 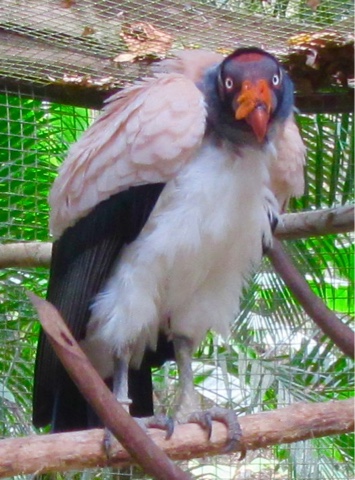 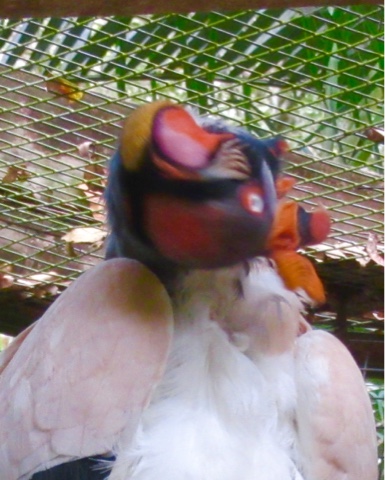 The Orange Fronted Parakeet is 9 inches long and weighs 2.8 ounces- 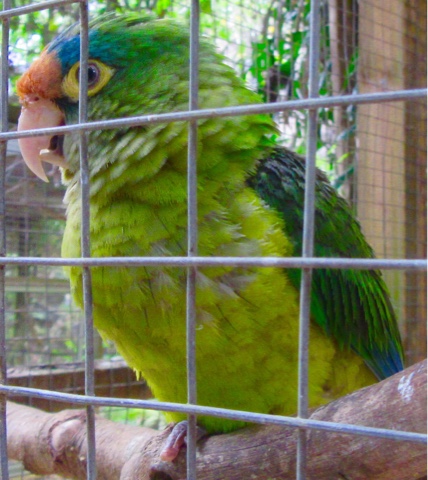 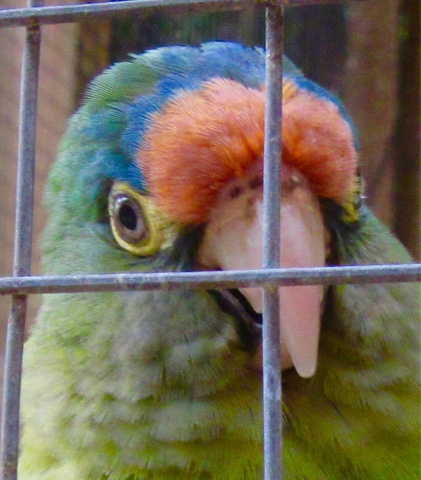 My favorite, the Keel Billed Toucan is found throughout Central America and into South America.  They eat mainly fruit but will also eat eggs and smaller reptiles.  They are endangered because people like to collect their beaks- 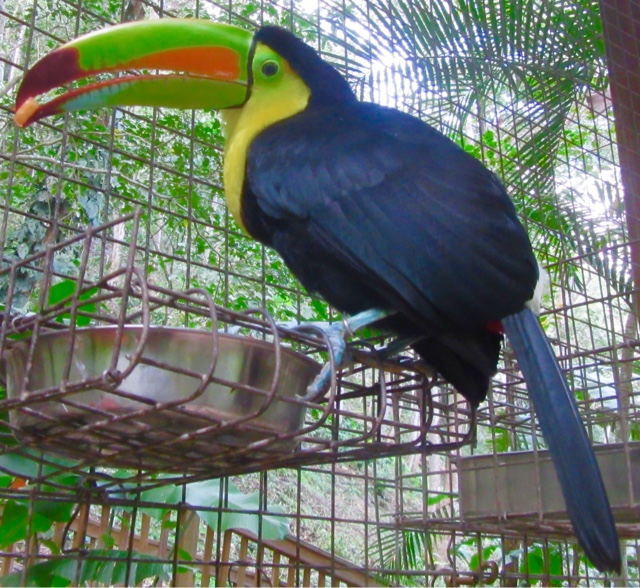 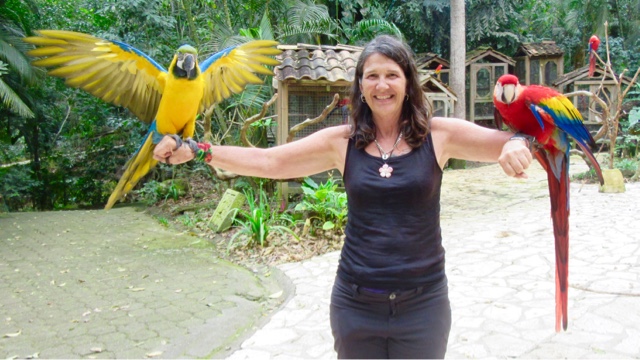 She or he, who knows!! wouldn't let me hold her/him- 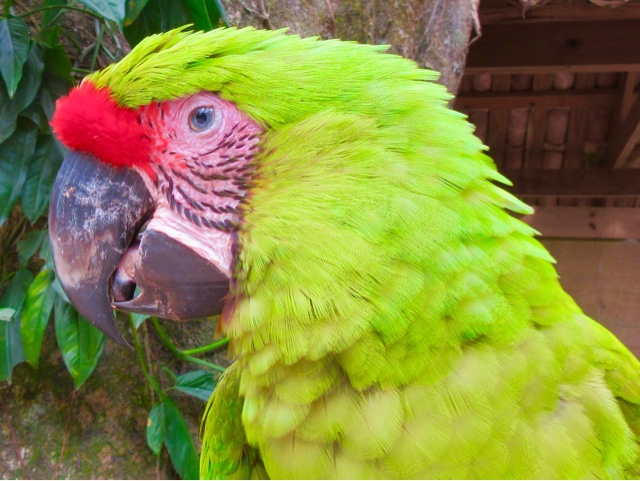 After Macaw Mountain, I visited the local market.  The fruits and vegetables are so bountiful after Belize- 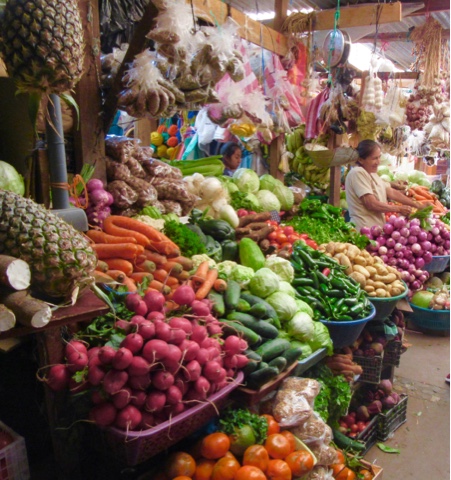 The radishes are bigger than golf balls- 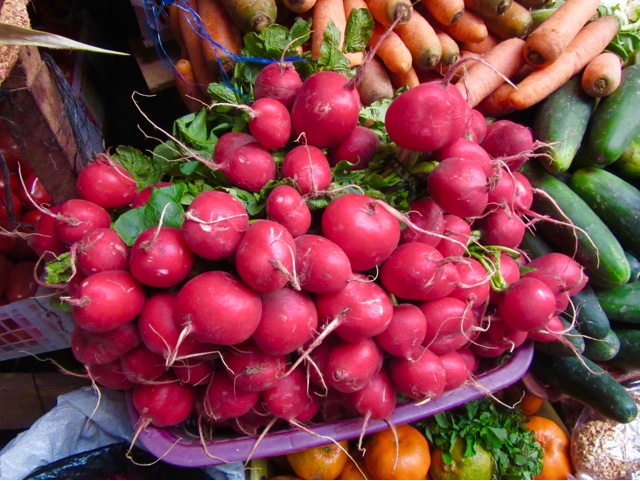 The streets of Copan Ruinas remind me of Antigua Guatemala- 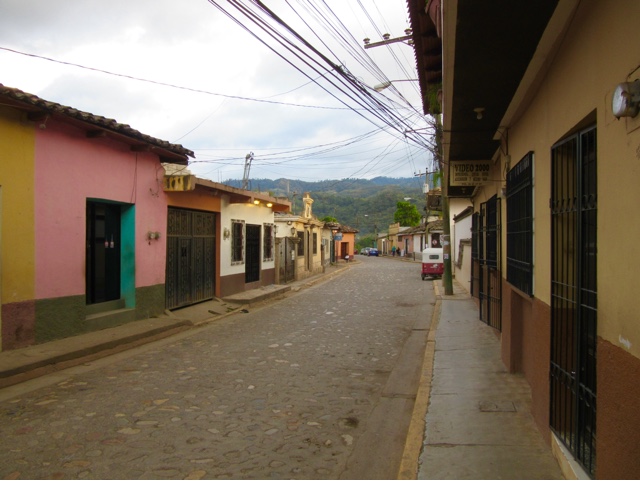 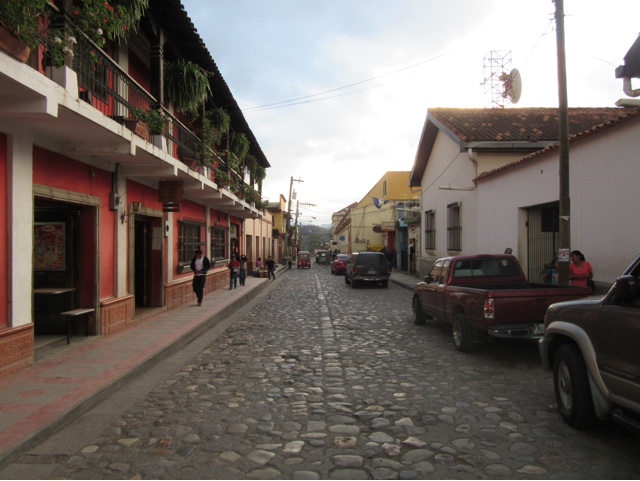 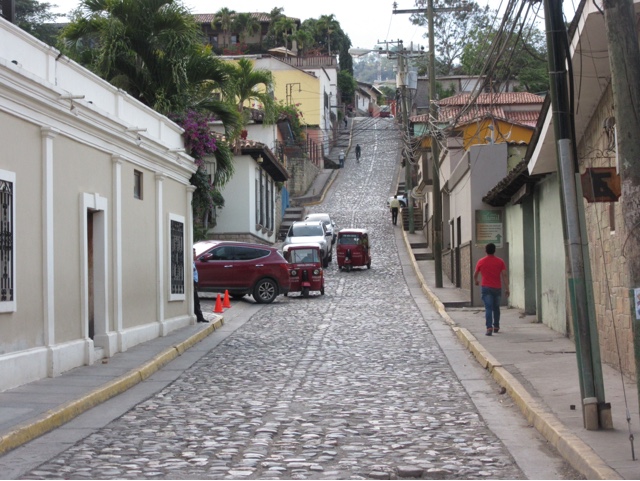 I am looking forward to visiting the ruins tomorrow!
at February 04, 2017