My journey to Antarctica started out as only a thought, that while I was in this part of the world, I may as well go.  The end of October, I looked at a few websites and noticed there were a couple cruises available on January 7, when we were 'supposed' to be arriving in Ushuaia.  The next day, I checked the website again and there was only one cruise listed!  I immediately emailed Quark, the company, to inquire more seriously and to say I would like to share in a triple room, which is cheaper.  I was told there was only one spot available, and it was a single cabin.  So, I took it.  As life unfolds if we let it, later that afternoon, I got an email from my financial advisor asking for permission to sell some stocks and wouldn't you know it, that amount was only $250 less than the cruise!  So, I was on my way to Antarctica.
I never really anticipate anything.  I find it a waste of time - too much energy is burned trying to imagine something that hasn't happened.  I also don't look at pictures or read much about the places I'll see.  Yes, I read about what there is to do in a place, but not all the details.  I like it that way because then everything is a surprise.  When I was in Jordan and we were going to Petra, I had no idea what I was about to see.  Everyone on the tour was so surprised at that, but it was true and absolutely amazing when I saw the treasury for the first time!
So, I left Ushuaia not having a clue what I might come across.  Yes, I expected ice, snow, water, penguins and probably seals, but that was about it.
Our journey took us to many places: 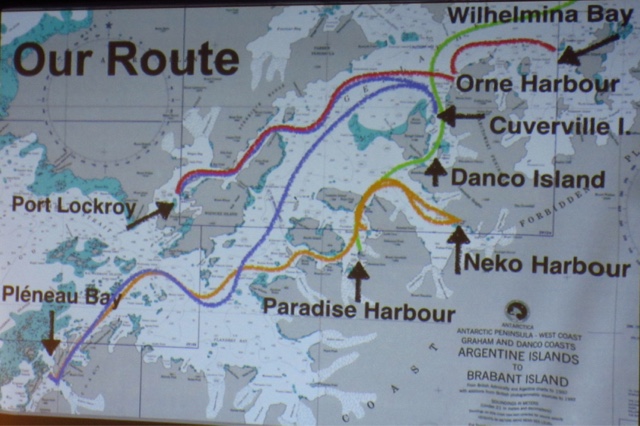 Life in numbers:
187 guests, 5 elephant seals, 2 leopard seals, 65 Polar Plungers, 29 Type B Orcas, 65+ crab eater seals, 6 birthdays - 7 if you include Nico's, highest altitude 186 meters, 13 lectures, 8100 Gentoo penguins, 1610 nautical miles sailed, 6 recap meetings, 30+ humpbacks, 8 cruisings, 3 continental landings, youngest traveller was 15 and the oldest was 89, 60 campers, 16 kayakers, 146 metric tons of diesel burned, 246 bottles of wine drunk, South 65 degrees 6 minutes south, 85 kilograms of meat grilled for our BBQ, 1 Adelie penguin, 1500 Chinstrap penguins and $4700 raised at the charity auction!
Antarctica is a land of water, ice, snow, penguins, sea birds, icebergs, seals, penguins, more ice and snow, sunshine, penguins, wind and absolute beauty.
It was wonderful to climb to a peak and sit and look out at the bay, the mountains, the icebergs, the ice.... All of it.
It's a beautiful place in our world and I am very lucky to have had the chance to see it!
at January 17, 2018