Whaler's Bay is the first bay inside Port Foster as you pass through Neptune's Bellows at Deception Island.  Jean-Baptiste Charcot, a French explorer, named it because of the whaling activities here in the 1900s.  The site is flat with a cinder beach that runs 330 feet before meeting a steep caldera wall. 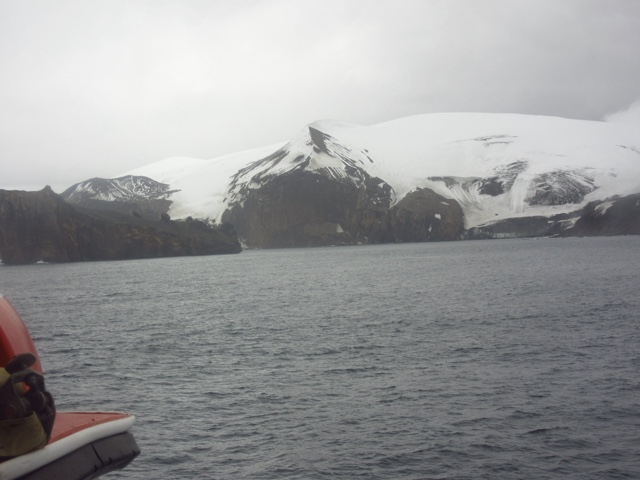 We've been divided into 4 groups.  2 groups go zodiacing first for 1.5 hours while the other 2 groups explore the land.  Then, we switch.  The first 2 groups to leave in the morning, are the second 2 groups to leave in the afternoon.  We get 3 hours/visit off the ship and we hope to do 2 visits/day.  Quark has a lot of zodiacs and 10 people plus a guide travel on each.  There is lots of room and opportunity to take millions of photos- 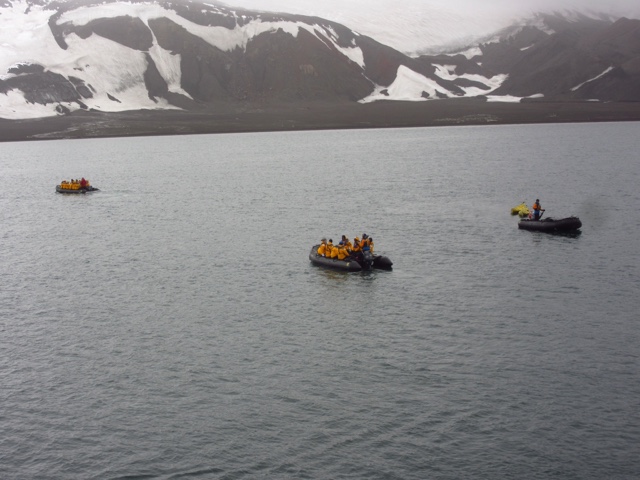 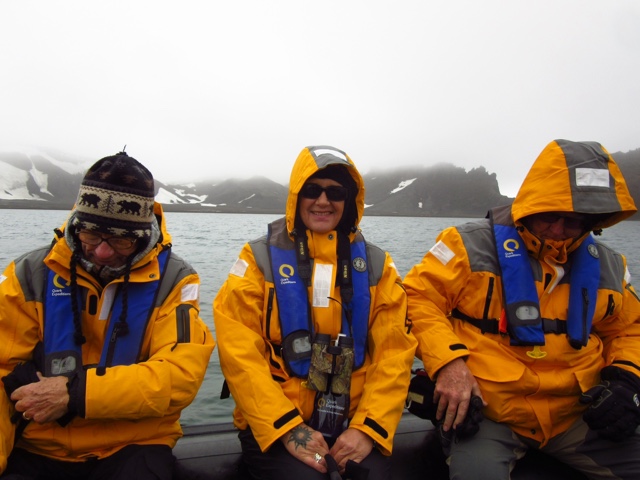 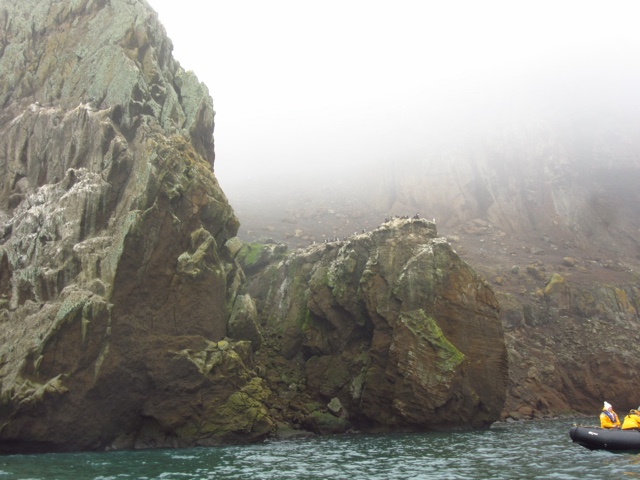 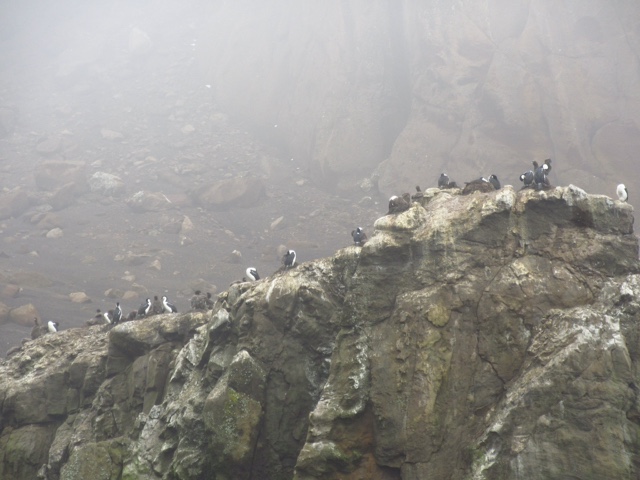 Further along we came across the stern of the Southern Hunter, a whaling boat, foundered on Raven Rock in 1956- 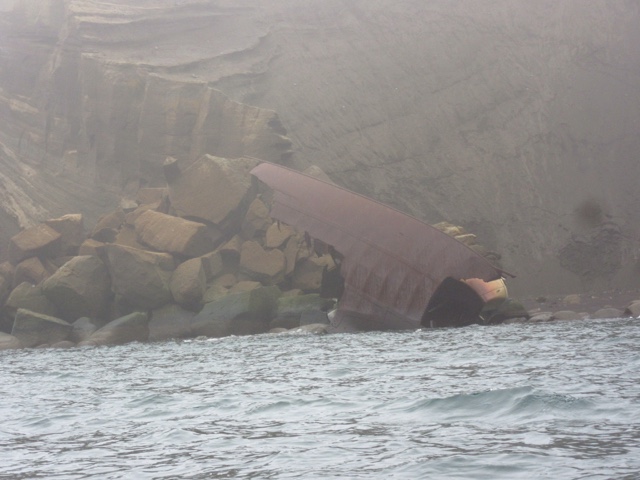 One of the largest colonies of Chinstrap penguins is found at Deception Island.  There are at least 70, 000 pairs- 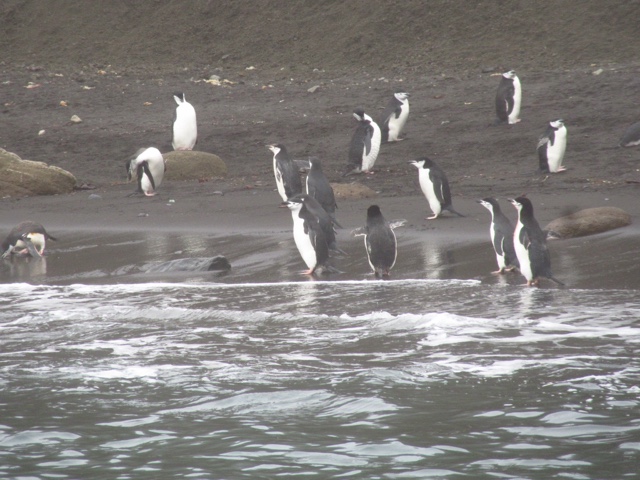 We drove around to the other side of the island to see Neptune's Window.  Once on the island, there wasn't any point in climbing it because it was too misty to see anything- 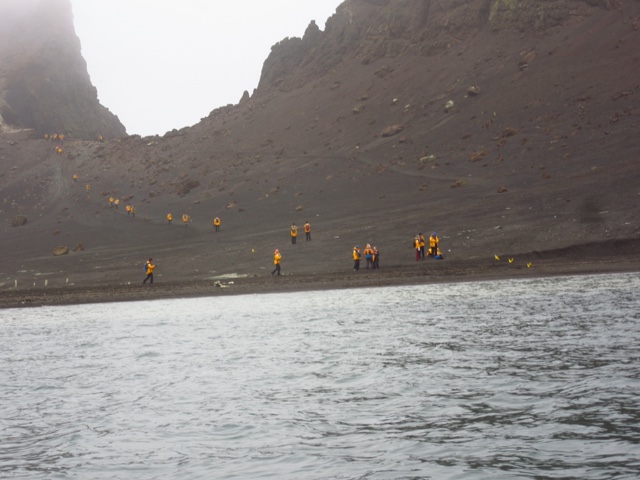 The buildings on Deception Island are the remains of the Norwegian Aktieselskabet Hektor whaling station and a British Antarctic Survey base which was evacuated in 1967 during a volcanic eruption.  Up to 40,000 whales were slaughtered in this bay annually.  The British taxed each whale killed so eventually the companies built ships on which they could slaughter out at sea so they no longer had to pay taxes.  Boats would fill the shore and at first, they only took the blubber.  40% of a whale's blubber is in the meat and bones but initially, they left the rotting carcasses on the shore.  Eventually they figured out how to process the whole animal- 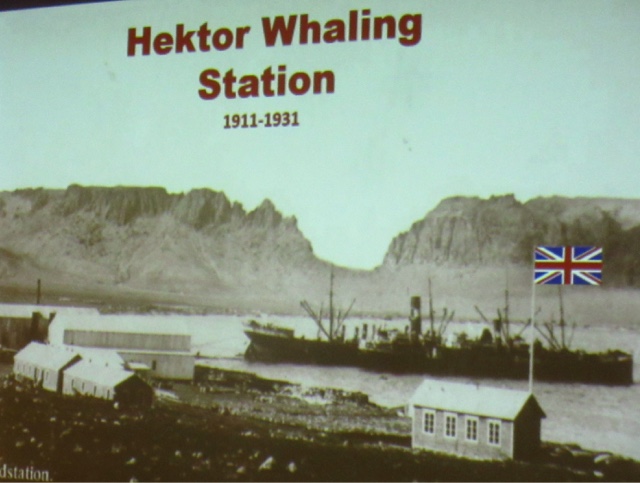 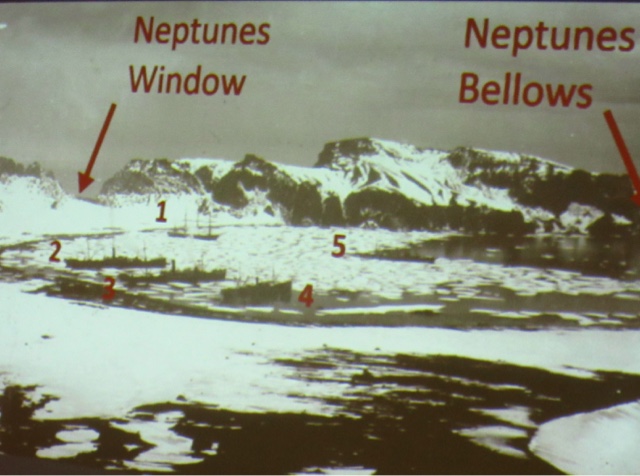 We watched a video showing whales being sliced open.  A traveller took the footage in 1949.  The whale has been sliced open and the blubber is being pulled into the ship- 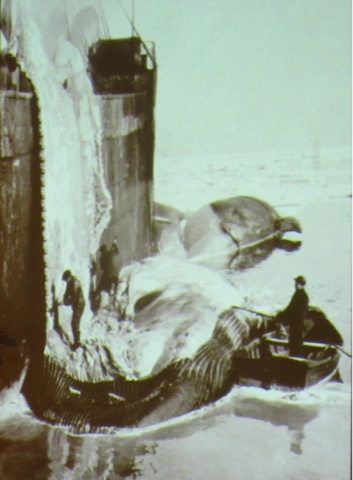 Big tanks were used to store the whale oil.  When the Germans were here during WWII, they used a tank as a decoy to lure Allied ships, so the British punctured the tanks so they couldn't be used like that- 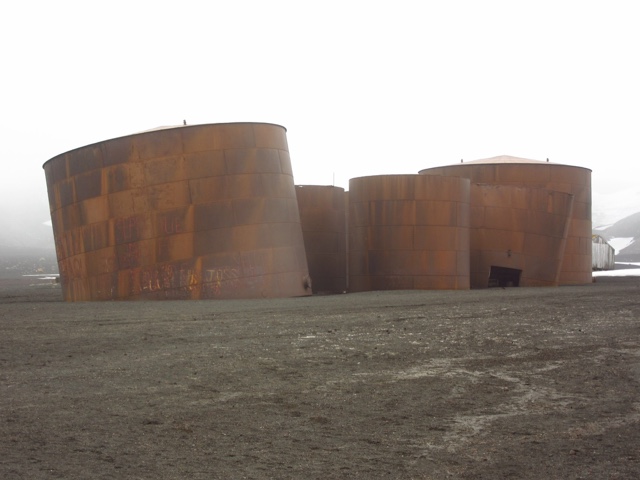 The processing plants are huge- 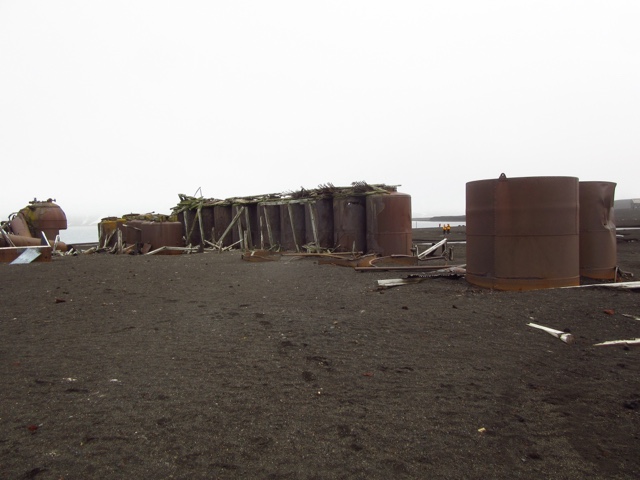 And now the home to a parent Kelp gull who is feeding her/his juveniles.  They put their beaks right into their mouth to grab food- 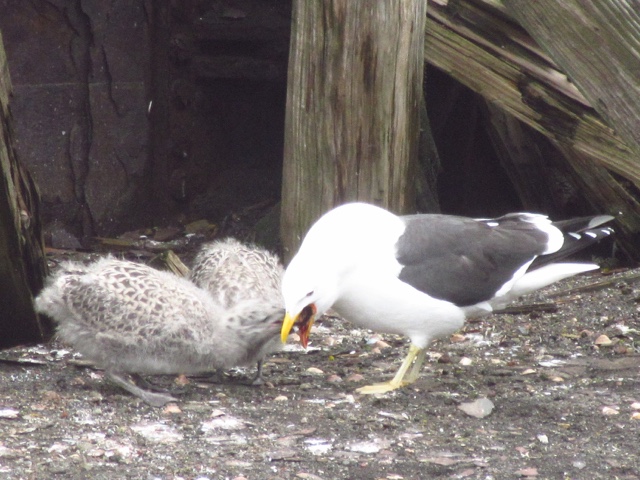 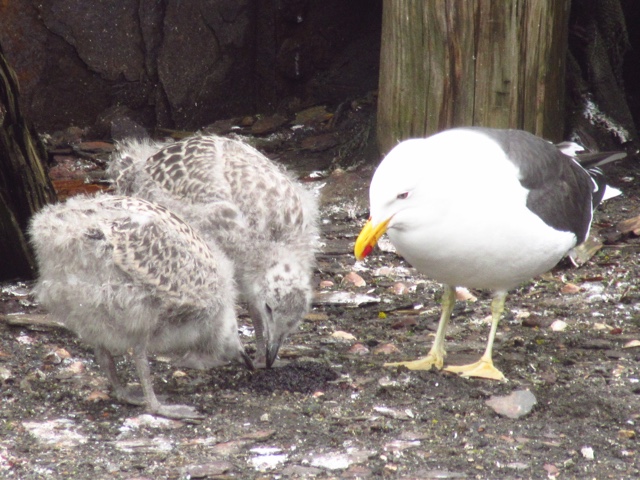 The residence of the whalers- 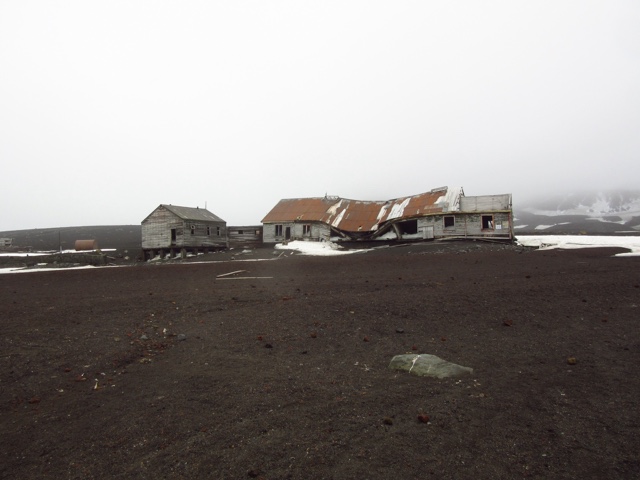 Whales were killed with harpoons and pulled into the bay, then winched up onto shore to be processed.  This chain would have been part of the winch system- 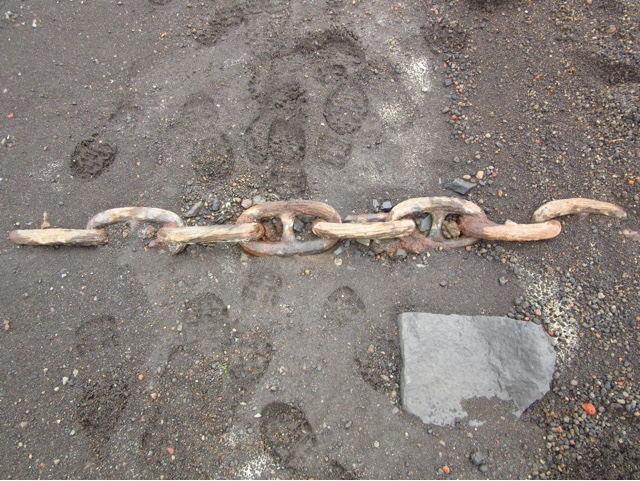 There are a few whale bones remaining- 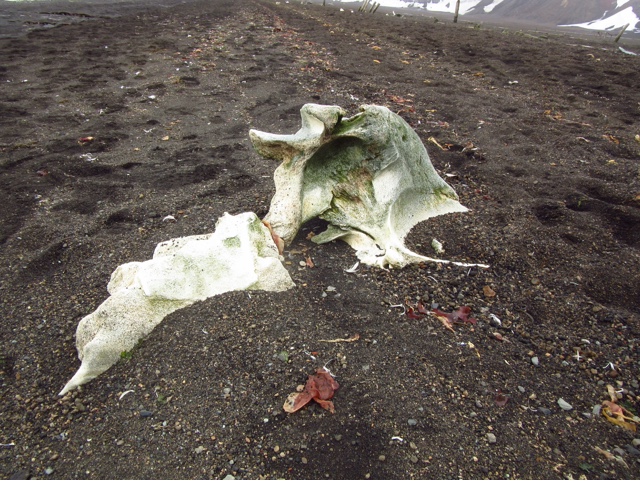 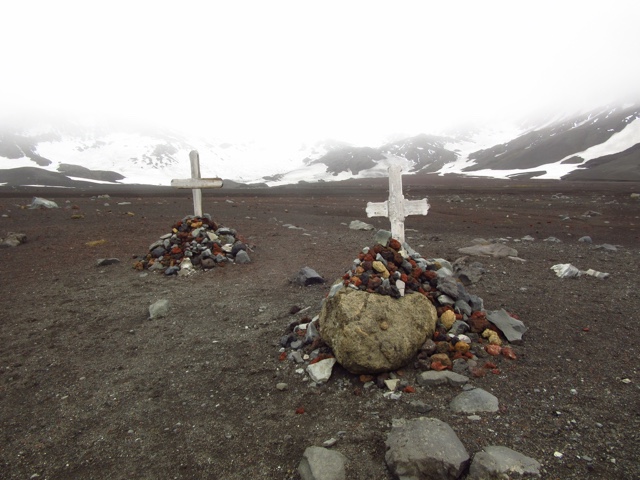 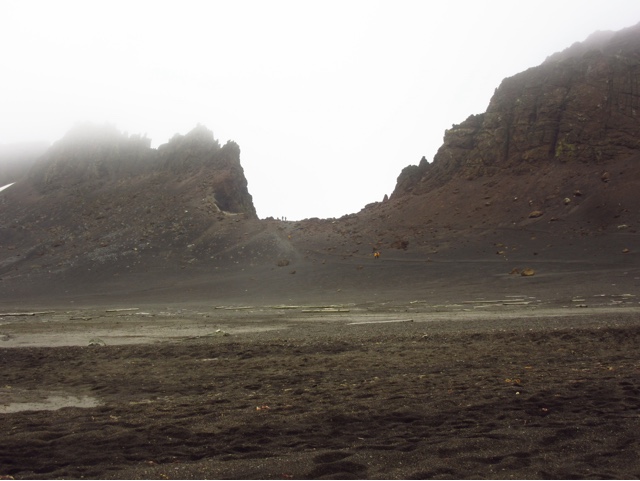 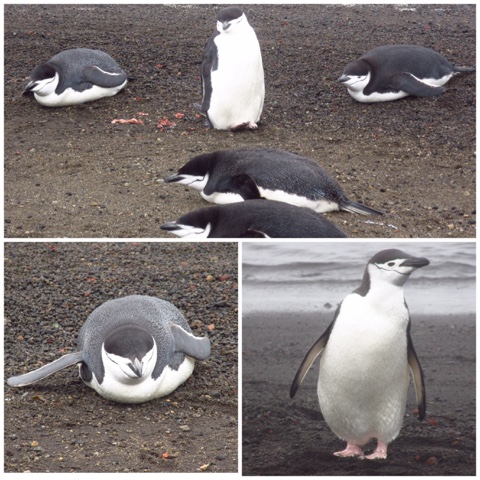 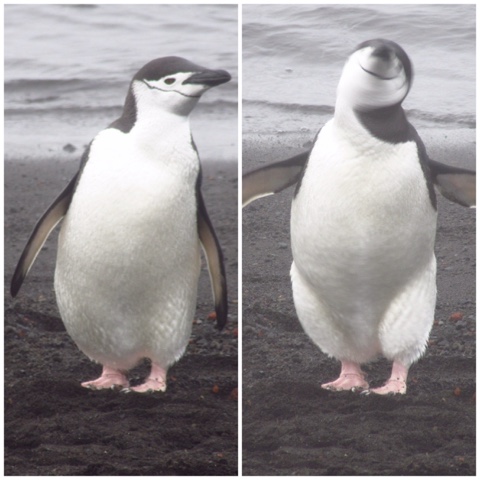 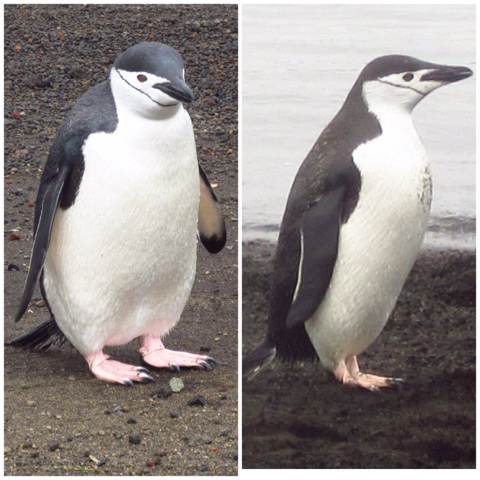 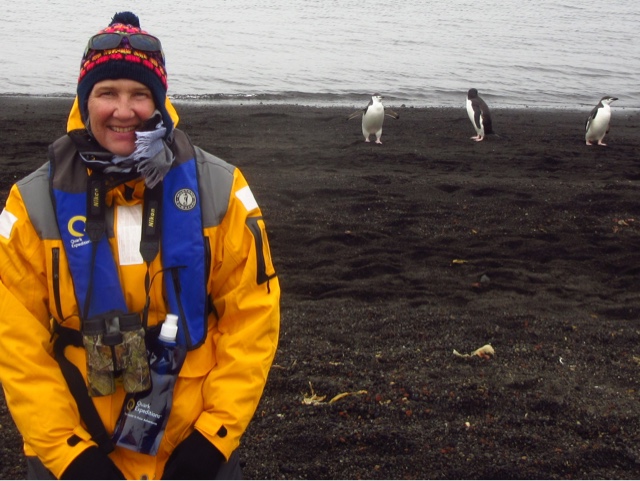 We were lucky to see a Leopard Seal.  They are predators that feed on penguins.  When they catch a penguin, they hold it in their mouth and shake it until it's turned inside out, so the meat is on the outside.  The seal will only eat the breast meat! 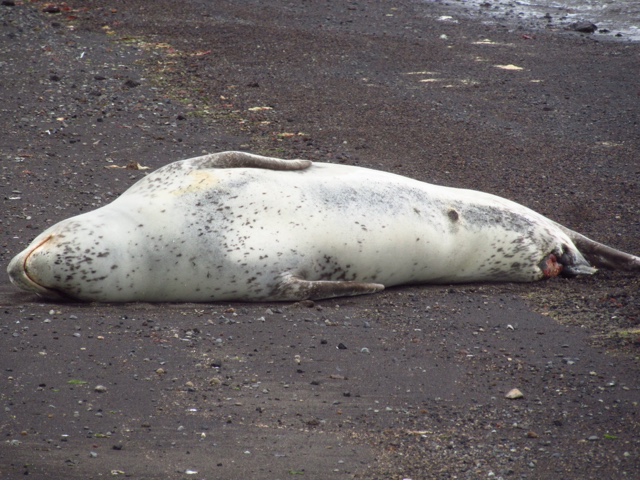 I was a bit chilly today and have on all my clothes so I hope it doesn't get any colder.  Supper was good again - pork tenderloin and pavlova, which was invented by the Kiwis after Anna Pavlova, a Russian ballerina visited New Zealand.  It is however, the national dessert of Australia.  National dessert? 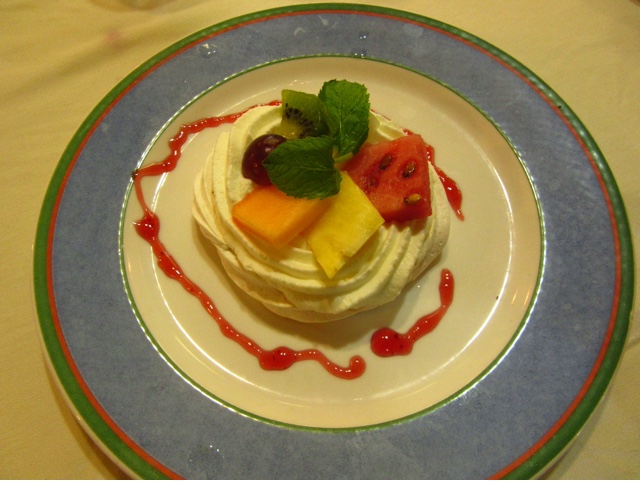 Tomorrow we're hopefully visiting Danco Island and Paradise Harbour but everything depends on the weather!