Wow!  October 17, 2018.  I thought the day would never come.   Today, POT is legal in Canada!  So Unbelievable! and so AWESOME!!  Happy toking everyone!
I left Porto in a light drizzle and drove southeast to Coimbra. There was little traffic on the beautifully surfaced highway, I guess it can stay like that when the weather doesn't fluctuate like it does at home.  The air was smoky, in some parts as smoky as it was in The Battlefords this summer.  It took 1.5 hours to get to Coimbra even though it was only 100 km because once I left the highway, I was on a roller coaster of a road!  MapsMe performed perfectly again and parking was a breeze.
I'm staying in another seminary, mostly by myself I think.  It's very quiet, clean and beautifully simple- 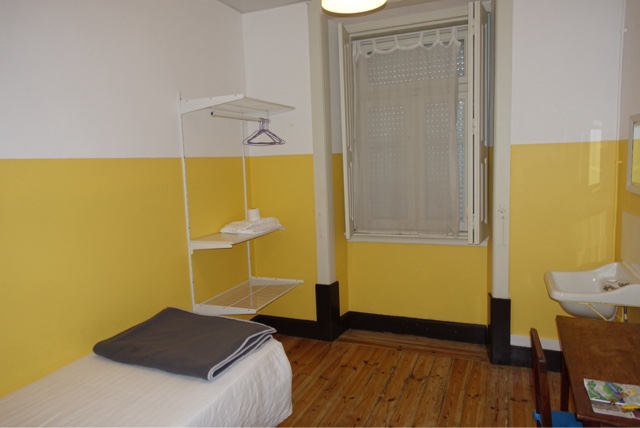 I  keep trying to imagine what it would have been like to live here as a seminary student:  if they had to be silent, where they worshipped, where they ate, their clothing etc.  Today it is advertised as student accommodation for the university but there are none here which is fine with me.  Hopefully I'll have a great sleep.  And that's the thing.  This cost a little more but a perfect sleep should be guaranteed.  A dorm room costs a little less but if there are yip yos in the room like last night who come in at 2 am and clump around in their boots, slam their locker doors and talk out loud, it makes for a long night short on sleep.  So, here's hoping.
Coimbra is known for its university which was established in Lisbon in 1290 but eventually moved here permanently in 1537.  This makes it the oldest university in continuous operation in the world.  There are over 23,000 students and 1500 staff.  The entrance, Porta Férrea, or Iron Gate, was built in the 17th century and the female figure of wisdom can be seen on both sides- 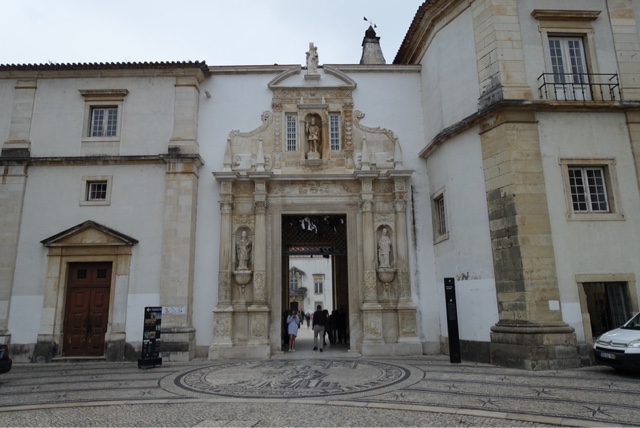 The tiling is also nice- 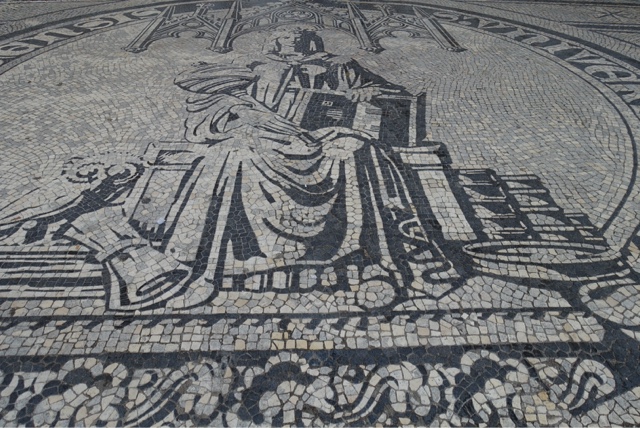 However, before it became a university, King Alfonso Henriques chose it as his residence in 1131, making it the Royal Palace of Alcáçova.
The bell tower, (1728-1733) is presently closed because of the storm that passed through on Saturday and Sunday- 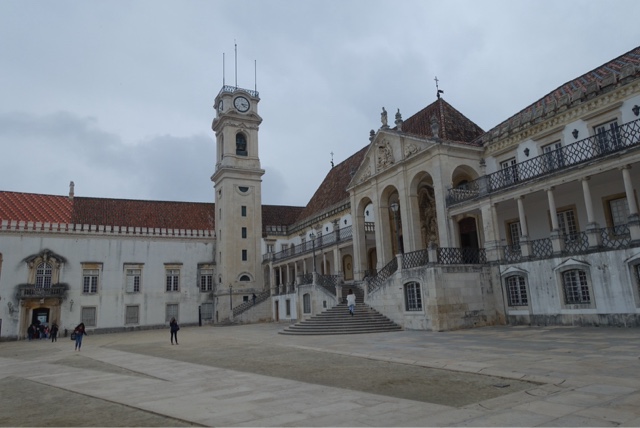 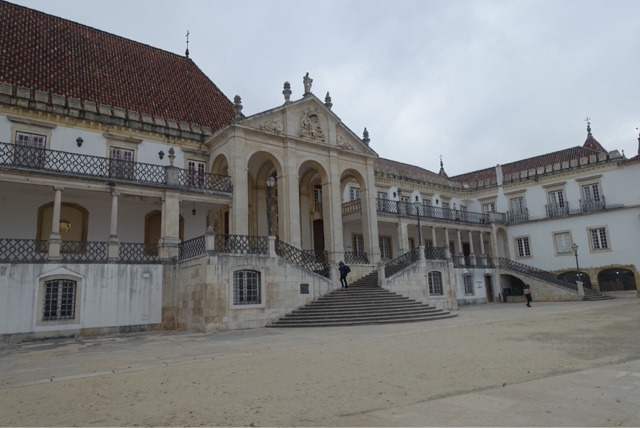 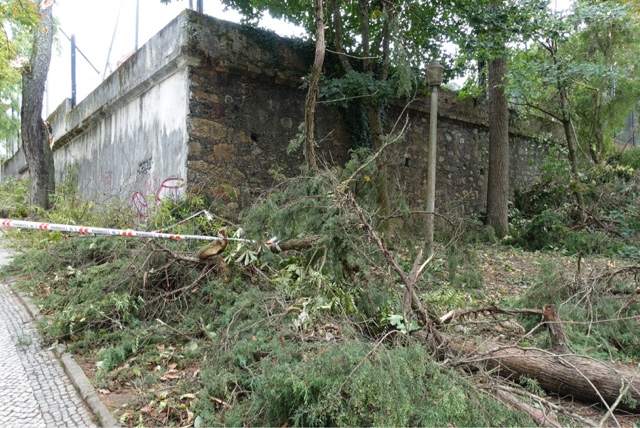 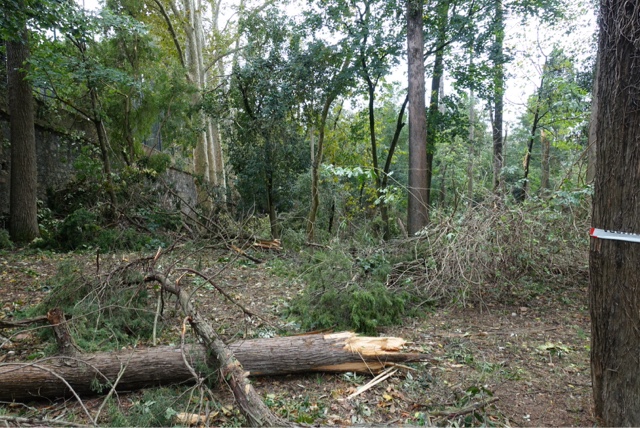 Once inside is the Sala dos Capelos from 1655, which was the throne room but today is where the university holds most of its official ceremonies.  PhD oral exams are done here- 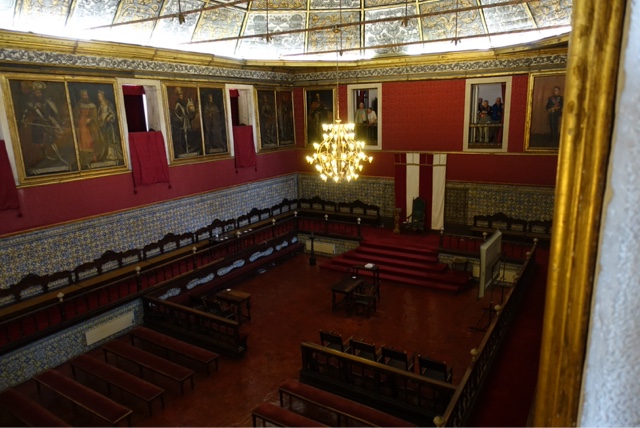 The ceiling panels are made from wood- 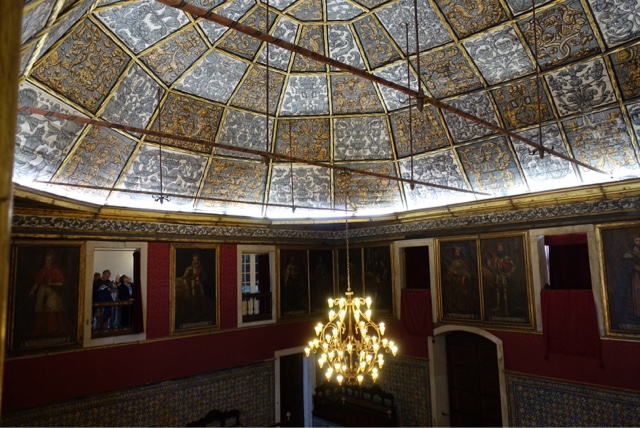 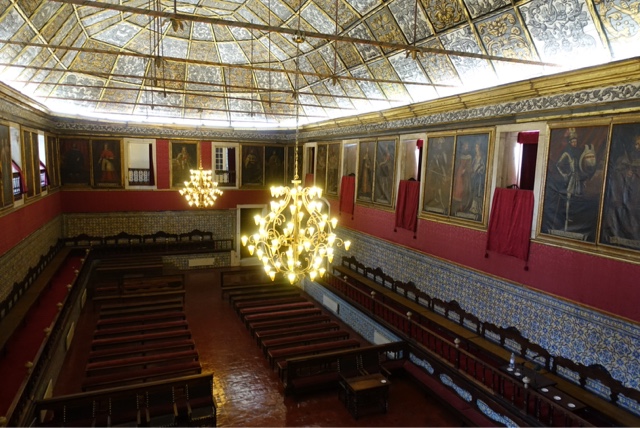 The private examination room was where, in the beginning, the king slept.  The ceiling shows the different colleges at the time:  theology, law, medicine and cannons- 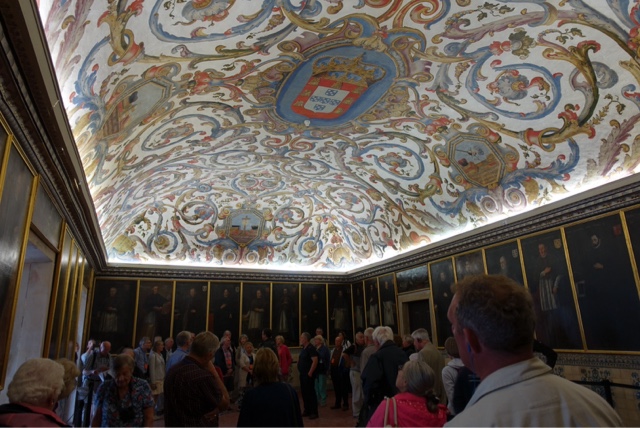 Portraits of influential rectors adorn the walls.  Rectors are clerics who function as administrative leaders in the church- 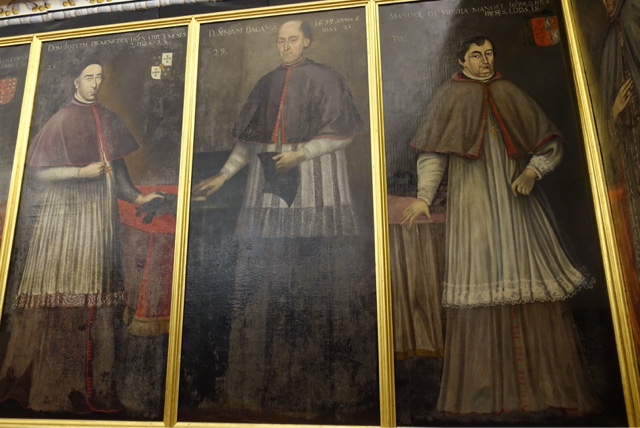 Next door is Sao Miguel Chapel, built between 1517 and 1522.  The entrance is in Manuelino style, so called because it was commissioned by King Manuel- 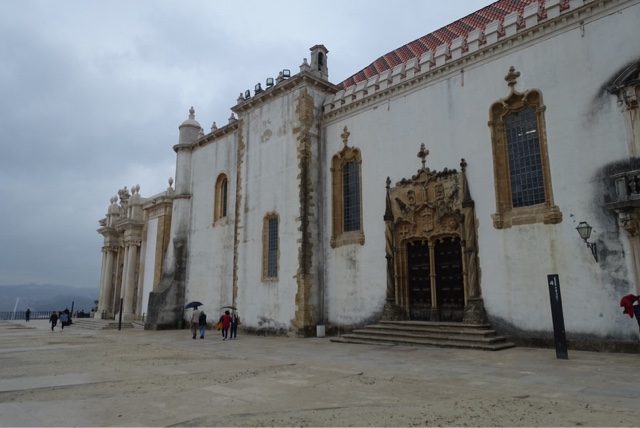 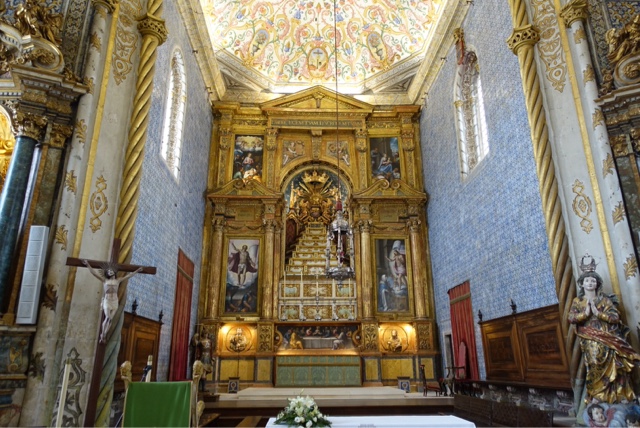 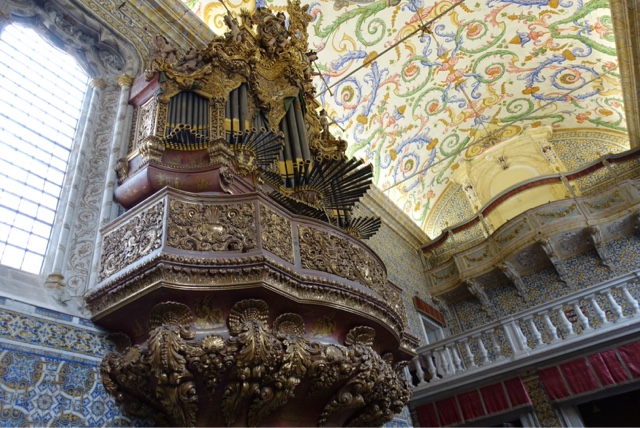 The pipes come out horizontally- 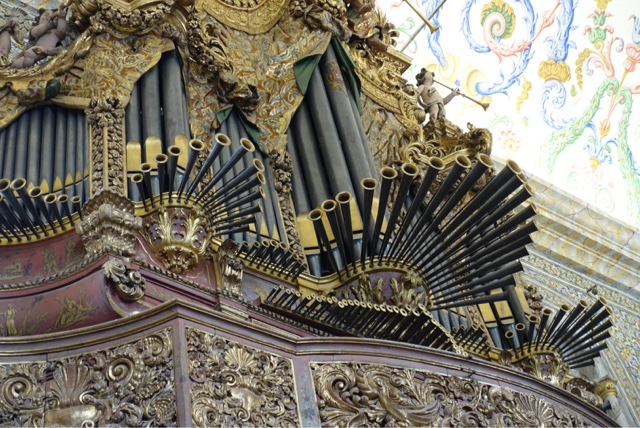 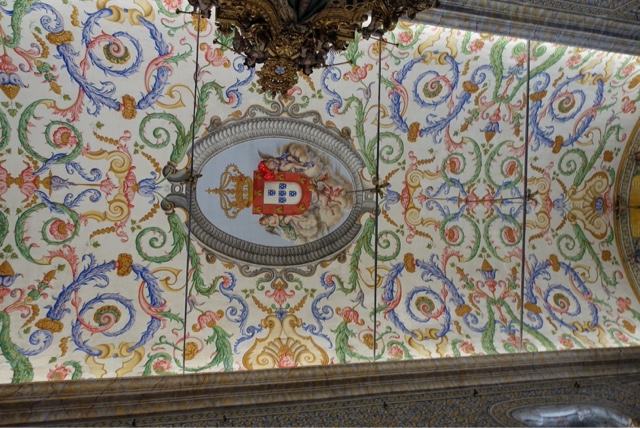 The highlight of the visit was to the Biblioteca Joanine which was built in 1717 and is gorgeous.  No pictures were allowed so I've borrowed some, thanks to the Universidad de Coimbra website.  There are three rooms with 72 shelves on two floors- 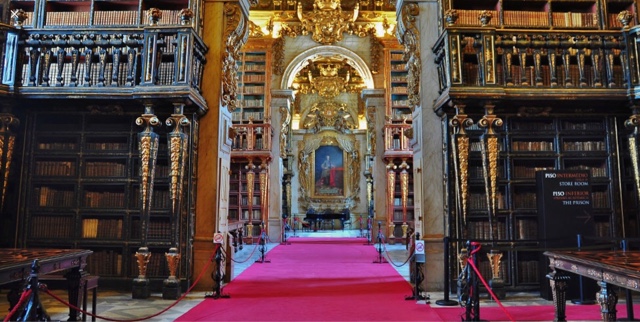 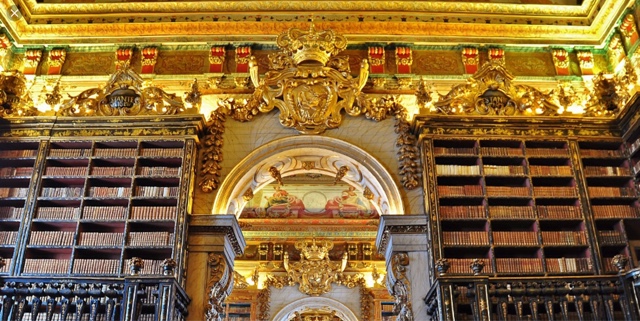 It is a gaudy, ornate place, suited to the rich snobs who would have studied here in the beginning. I can just see them hovering over a book with their wigs and smelly long cloaks!  Thanks also to the blog of dos alunos at Wordpress.com- 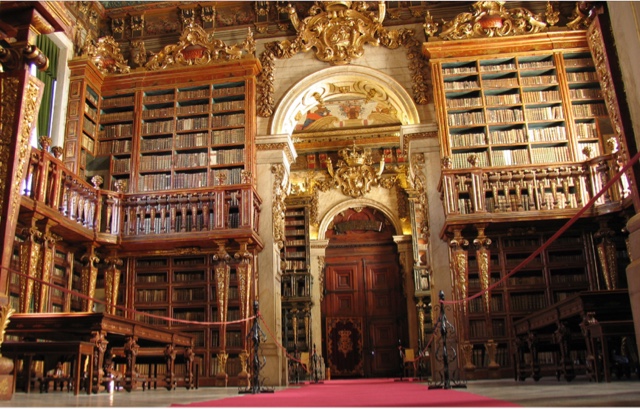 After my visit to the university, I wandered through the old town and found the Igreja de Sé Velha but I refused to pay the $3.75 entrance fee.  How different can a church be and why are they charging is my question.  It's a church!- 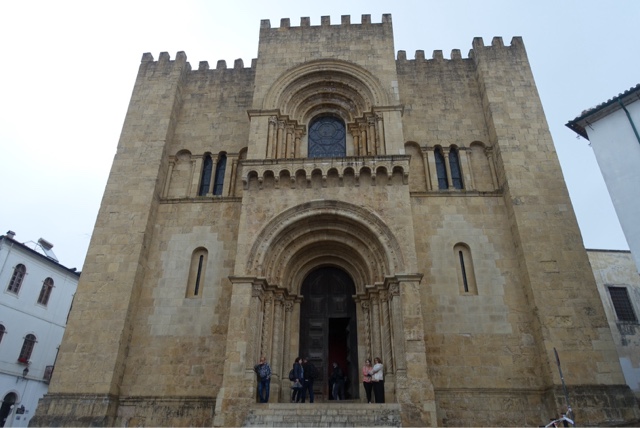 I was looking for a fado concert because apparently it started in Coimbra.  Fado is a melancholic love song style of music with mandolin- 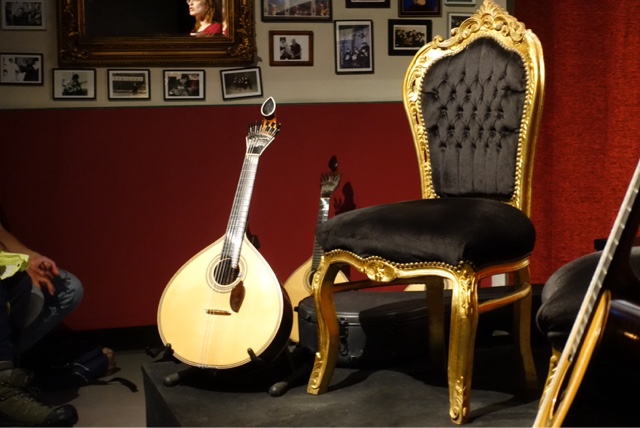 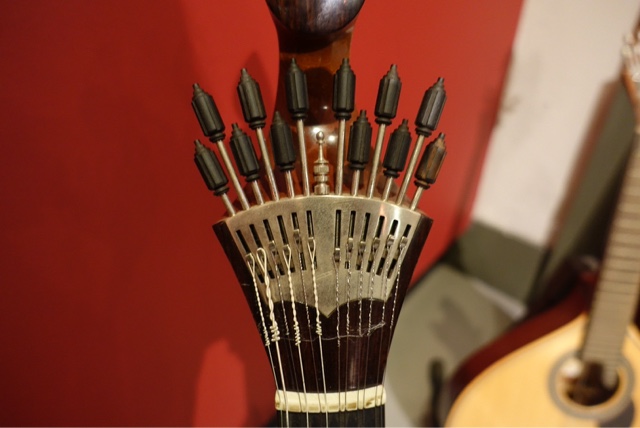 and guitar picking.  Men used to sing songs to women they hoped to date and people would gather in the street to listen.  When the song ended, the audience wouldn't clap to show their appreciation but make a sound as if they were clearing their throat.  I wish I could understand Portuguese but all the same it was beautiful- 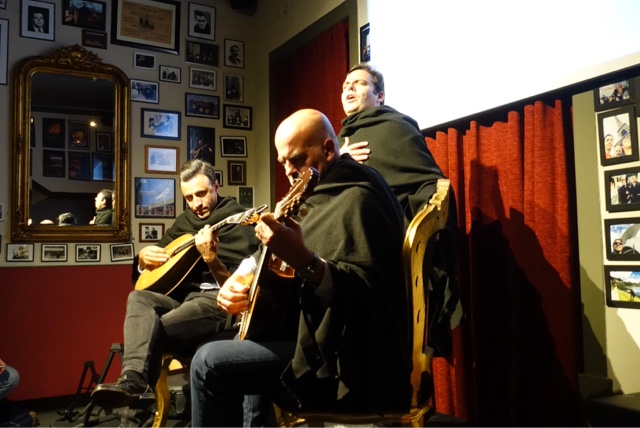 The room was small and decorated with many photos.  It reminded me of Preservation Hall in New Orleans- 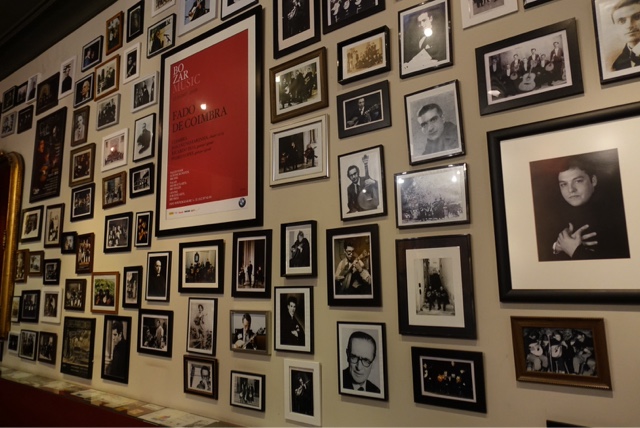 I had a good day in spite of the off and on drizzle and am looking forward to tomorrow.  I'm going to Nazaré which is on the coast and apparently has the biggest waves in the world!
at October 18, 2018