Well last night was interesting!  My balcony faces the street and about 9 pm, I heard an American woman talking outside, saying that this was where she was staying, obviously to a taxi driver.  I knew another person or people were checking in, so I went down to the front door to open it because there is no staff here at Varanda's Rooms.  When you arrive, you're supposed to call and they rush right over with the key.  Well, they thought I was the owner so the cabbie left and Thesalonika or "T", came in.  She tried to call the number, ignoring the two zeroes at the front of it, so it didn't work.  I tried to call too and it had worked for me in the afternoon, but my phone is no longer in service - I need to buy more minutes.  So, we didn't know what to do.  There was no email address on the booking.com website so.....  It was already weird because my bedroom is on the second floor and I was instructed to use the bathroom in the basement, even though there is one right beside my room.  The cleaner returned yesterday afternoon and rushed in to lock the bathroom door by my room, making sure I wouldn't use it.  I tried my key in the lock and guess what?  It opened the door!  Not only did it open that door, but with T, we opened every door in this house, all 10 of them.  There were only 2 rooms ready for a guest - one called "Bar" which has a wooden bar in it which was pretty weird and another with a double bed which is what she had paid for.  There is also a 3 Euro charge by the owners if you arrive after 8 pm.  What a crock.  Anyway, I went back to my room and T got settled.  I don't know if she was able to contact the host or not but all of a sudden there was a commotion and a man had arrived.  He was very friendly and happy.  It turns out that his wife is the boss and she was on the phone talking to him, very loudly, but unfortunately in Portuguese so I don't know what was said.  He and she were both appalled that my key worked in all the doors and that we had settled T in ourselves, and she was apparently in the wrong room.  He left happily but did not give T a key.  Anyway, we went to bed and it was a quiet night.  This morning, we heard banging and watched as a woman left.  I guess she was in the apartment that we found on the main floor but she must have come home late because neither of us heard her enter.  Then, the cleaner who let me in yesterday arrived and told T she had until noon to get out.  T had planned to spend an extra night but that apparently was not possible.  When T said she wanted to stay another night, the cleaner just stared at her.  T said she understood that someone else was supposed to be coming today and to stay in T's room but besides the "Bar" room, it was the only one ready for guests.  The cleaner then lied, saying that every room in the house was ready for guests!  The house is now closing when I leave tomorrow but I guess it's pretty normal that places - hotels and restaurants close November 1 because it is the winter season.  The cleaner left but did not come back to clean my room or make my bed or pick up the registration paper like she said she was going to.  The house has also been removed from booking.com so we're not sure if it will be possible to leave the shitty review they so deserve.  We were able to easily find T a different place down by the water.  So, tonight I am all alone in this big huge house, at least for now!
Today was my last day in Portugal.  Tavira is a nice looking town, with an inner walled city and Rio Séqua running through it- 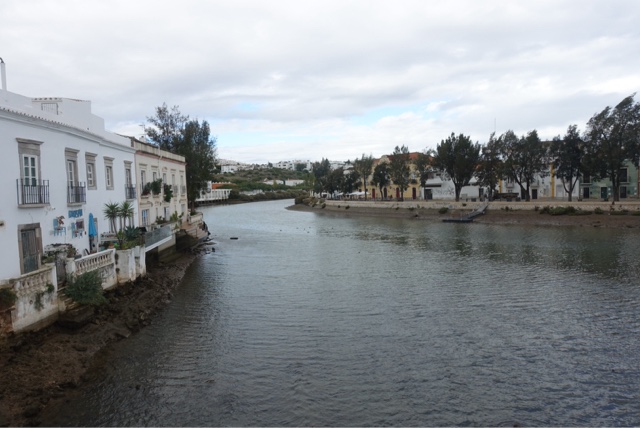 Of course, people come here for the beach- 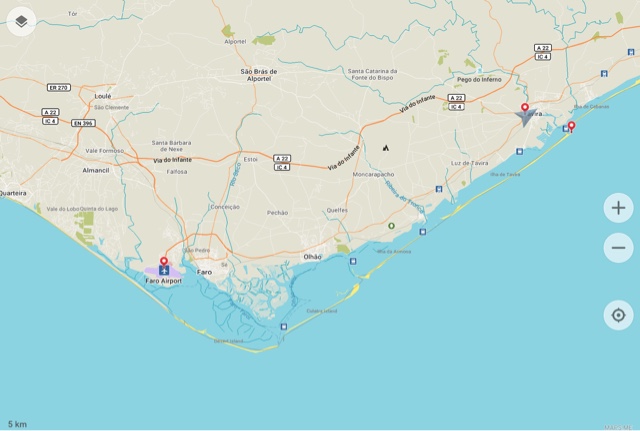 It's a natural breakwater that is about 40 km long.  You can walk from Tavira, on the far right, all the way to Faro, on the left, on a very narrow strip of sand (the yellow on the map) that at this time of year is pretty much deserted- 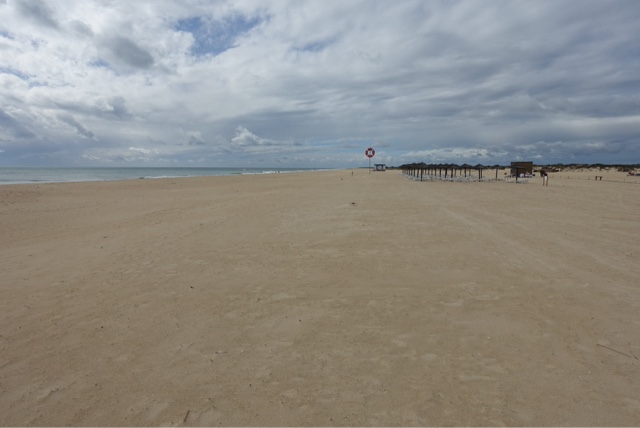 There are chaise longue ready for next year I guess.  The wind was blowing and it was cold so there were no sunbathers- 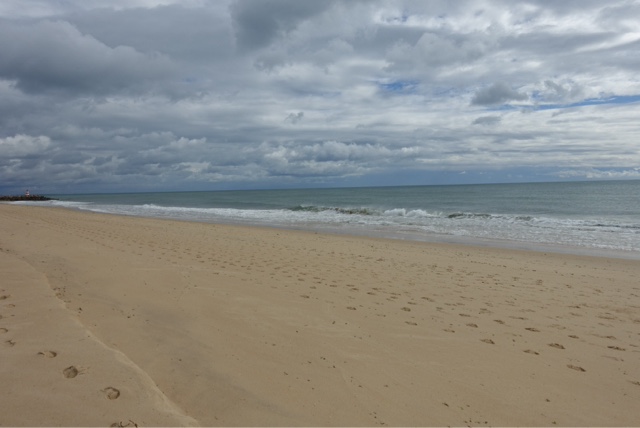 They've made a couple of fish out of mainly recycled materials- 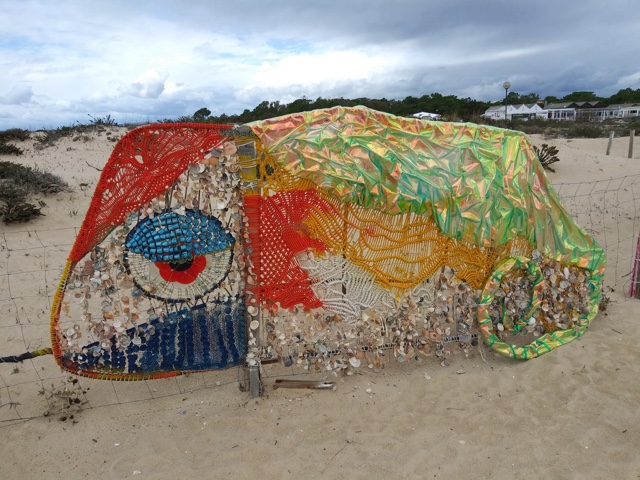 This one is made of wool, plastic and string and the blue eye is empty creamers- 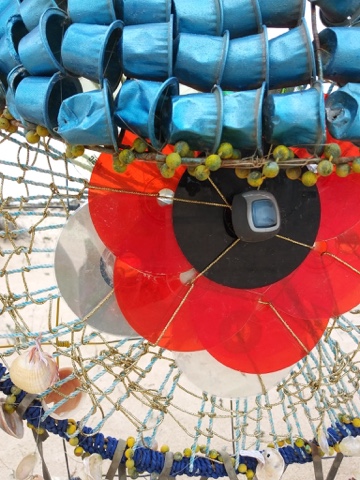 The second fish is made of string, wool and used CDs- 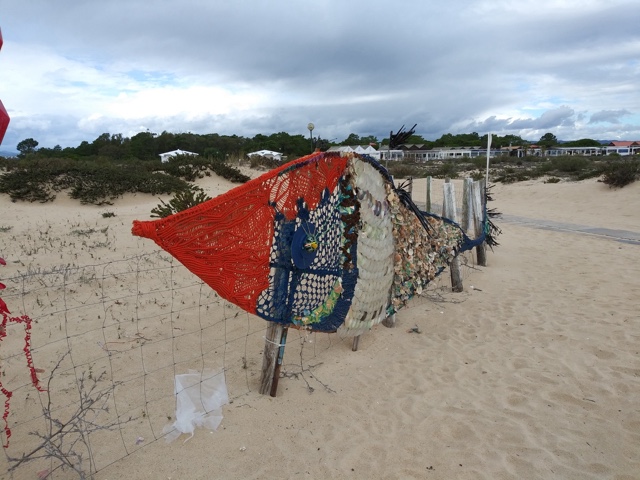 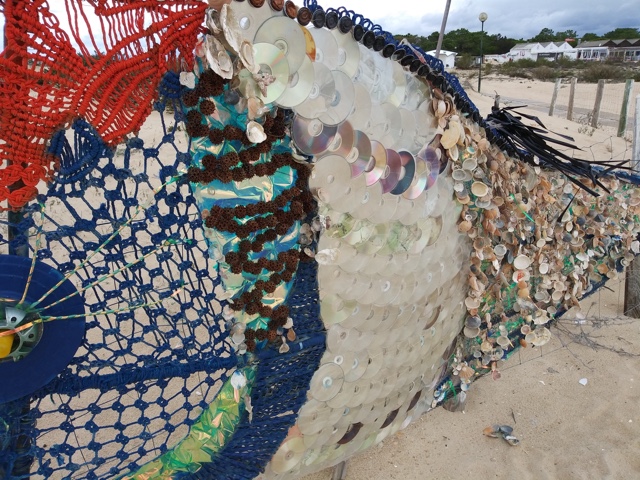 There were only 2 restaurants open and I had tuna.  It was the worst tuna I've ever had- 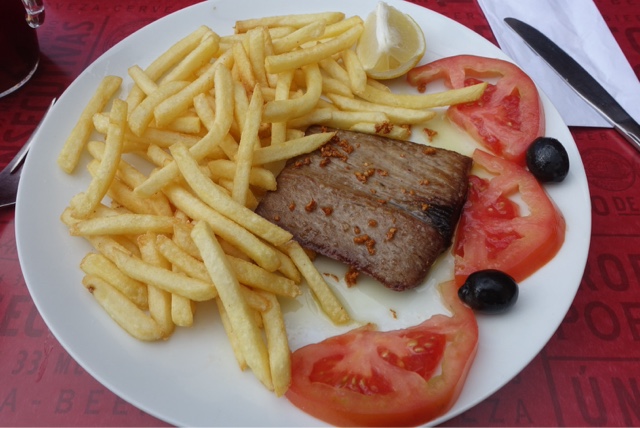 It was about half an inch thick and the garlic on top was burned.  Oh well, the sangria was good :)
I caught the ferry back to town and wandered.  There's lots of tile covered buildings here too- 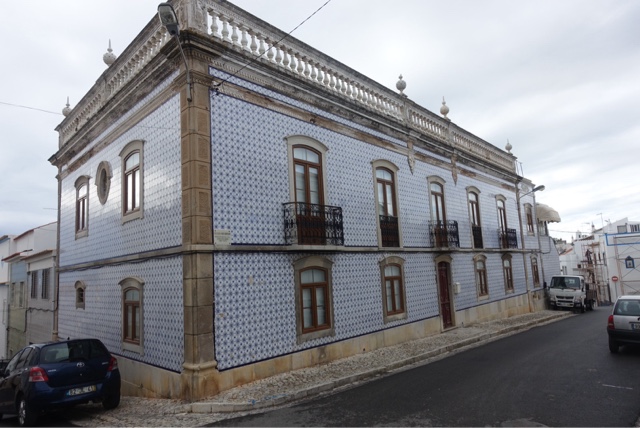 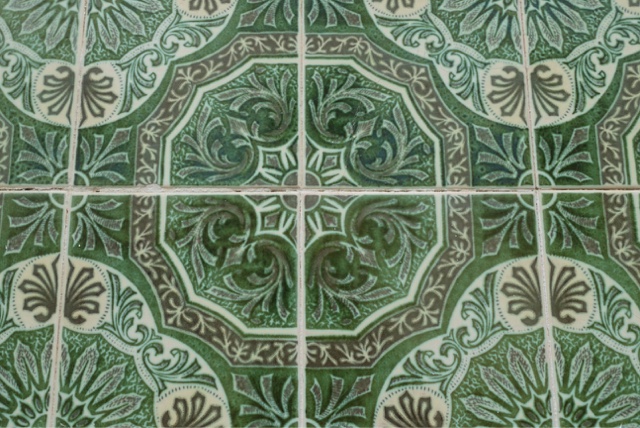 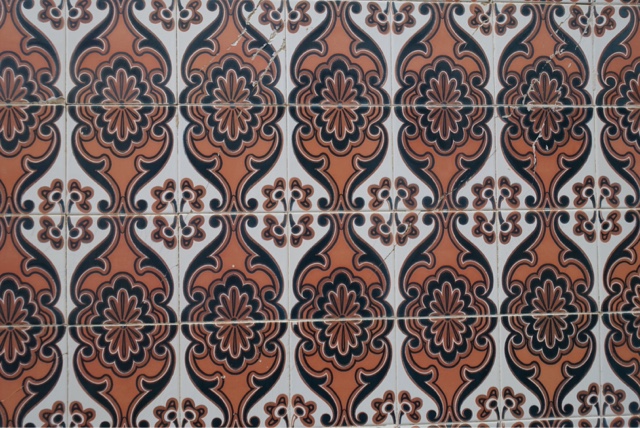 Tomorrow, I'm leaving early to drop my car off at the Faro Airport before I catch the bus at 10:30 to Sevilla.  Peace out Portugal!
P.S.  Andi loves her Dad! 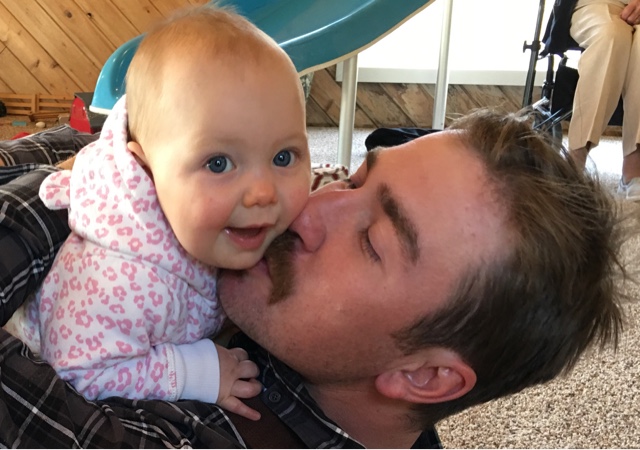