We were in a very quiet camping spot near the river so the breeze was cool all night.  Such a relief!  The village is so rustic - no power, no running water and no toilets but they do have a solar panel or two because a huge yard light comes on for a couple hours at night and some have radios that they play at full volume.  There are about 375 inhabitants and many many children.  The homes are made of adobe with thatched roofs- 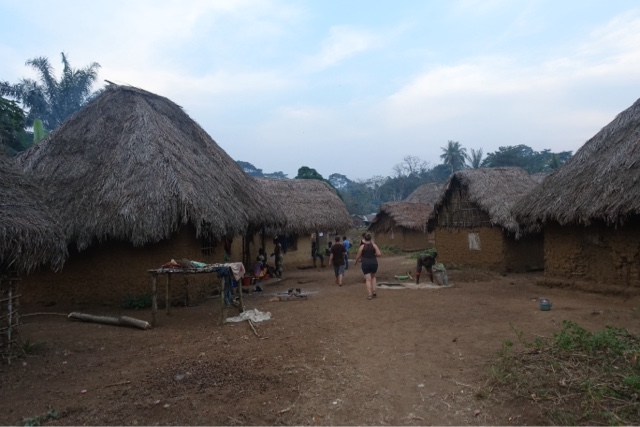 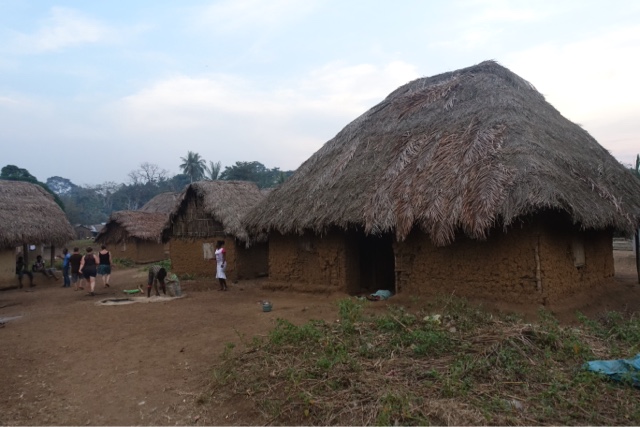 Chickens run wild, pecking all over the place.  The well is chained shut because it's muddy but they do have a good supply of water once it settles.  They cook on wood but I'm not sure what they eat:  I've seen large beans drying in the sun as well as chilis but other than that, not much.  They do have a small store that offered candy and toothpaste!  I wonder what they think when they see us.  And I wonder how often they leave their village because there are no cars, just a few motorcycles and the 22 km to the nearest town is a very bumpy trail.  They speak Mende and my favorite word is a mmmmmm sound which means something like yes they agree.
Last night driving in, the largest leaf spring snapped on the driver's side so that was the job of the day.  First, the truck was jacked up- 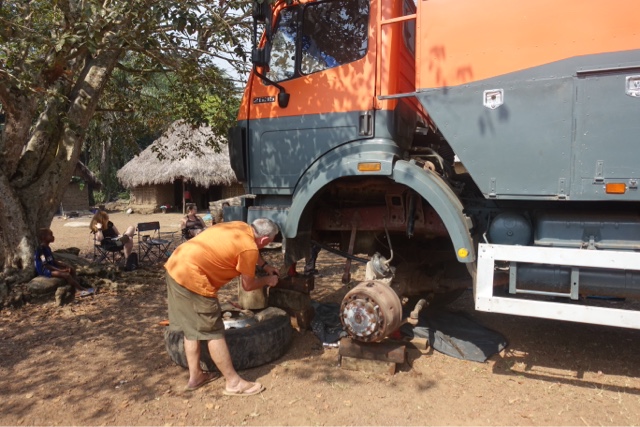 And then the springs were removed and the top one replaced.  It was a dirty, long job- 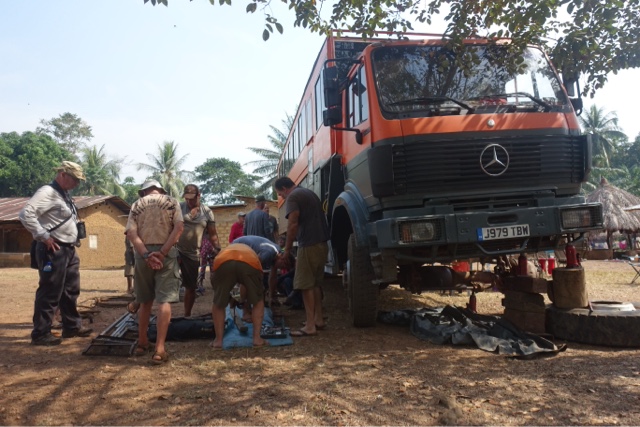 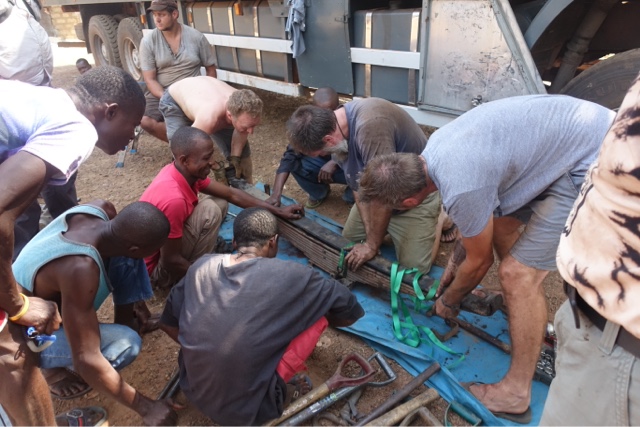 Ryan's job was to guard the tools.   Kids were everywhere and seemed honest, except for one who had his hand in more than one pocket.  Luckily we had a bit of relief when the kids were in school but school hours weren't long enough!  They were crawling all over us, wanting to be picked up, sitting in our chairs - just being kids I guess.  One woman offered us her 5 month old daughter.  She was her sixth and last she said!   Their school uniforms are some sort of green- 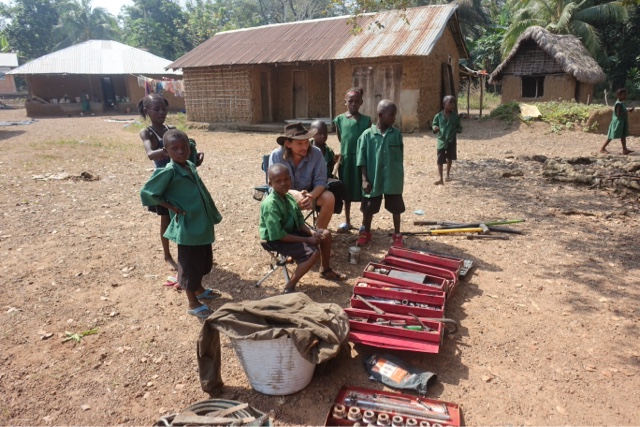 Later in the afternoon I went on a boat trip in the Moa River with Tiwai Island on the right hand side.  It's only 12 square kilometers and is rainforest, some of the last in West Africa- 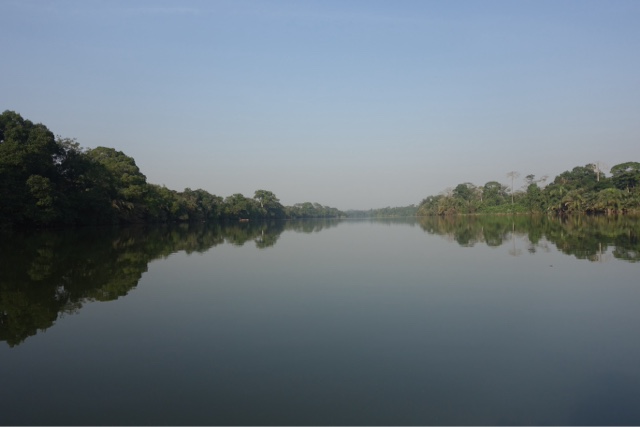 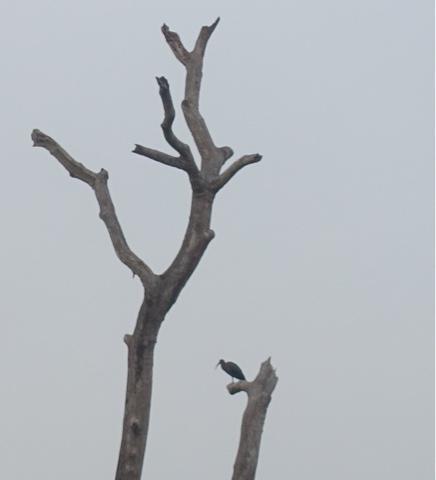 We stopped at an island- 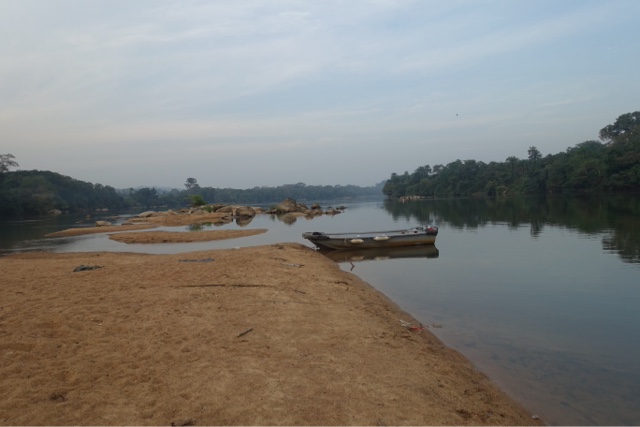 and also met some men who had captured baby alligators that they were going to move to a different place, or so they said- 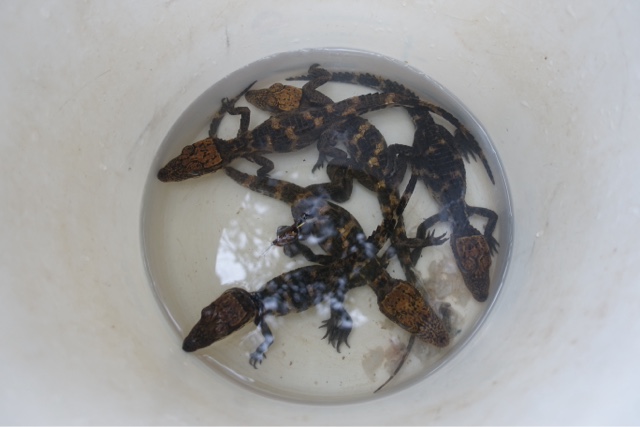 Some went on a night walk to see Pygmy hippos but instead saw a green mambo that slowly slithered across the path.
I still haven't received a copy of the receipt my two "friends" in Freetown were to have sent once they paid the 50,000 Leones to the bank to pay for my police report!  I am not holding my breath!
Tomorrow, we have an 8 am start as we hopefully get into Liberia and to Monrovia.  Martin and JohnCarlo fly out Friday so we hope to get them there in time.  Looking forward to moving on!
at January 13, 2019