I was in bed by eleven last night so missed all the kissing.  Darn.  This morning 15 of us went to the Chimpanzee Reserve.  All I can say is that I hope my entrance fee of $20 will be used for something worthwhile.

Along the way: Waterloo was mental as always- 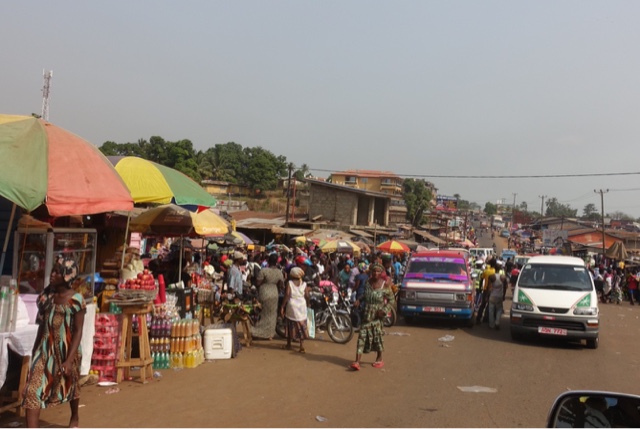 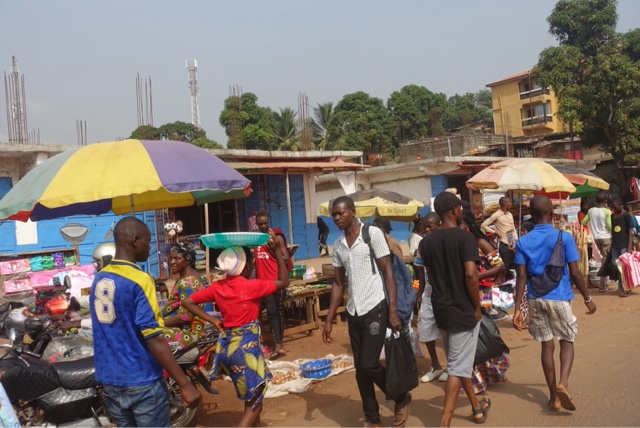 Their "chicken buses' aren't as nice as Guatemala's but they're okay- 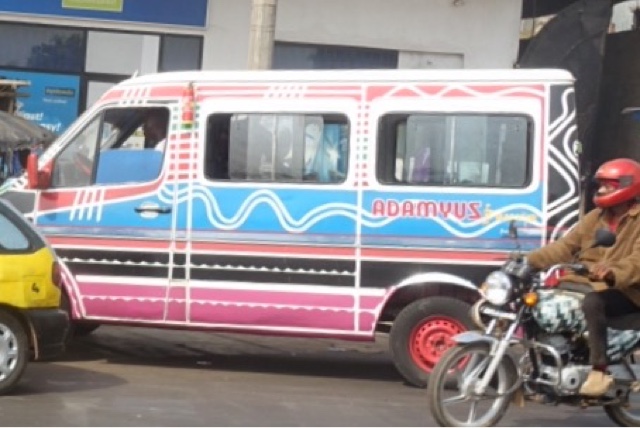 Mini buses break down everywhere and that's where they get fixed: even in the middle of the busy road- 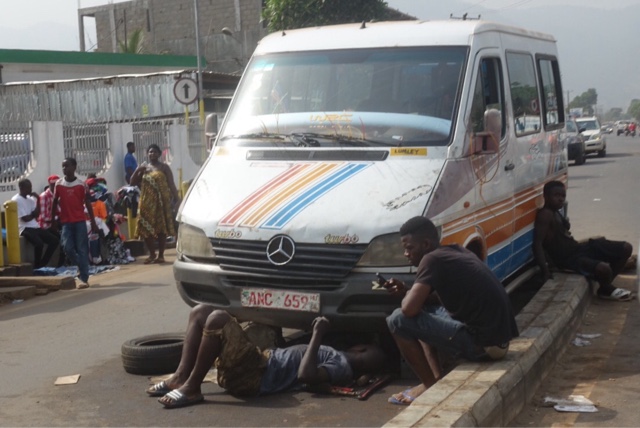 At the Chimpanzee Reserve, they have examples of poaching material:  shell casings and fish nets that are used as snares-- 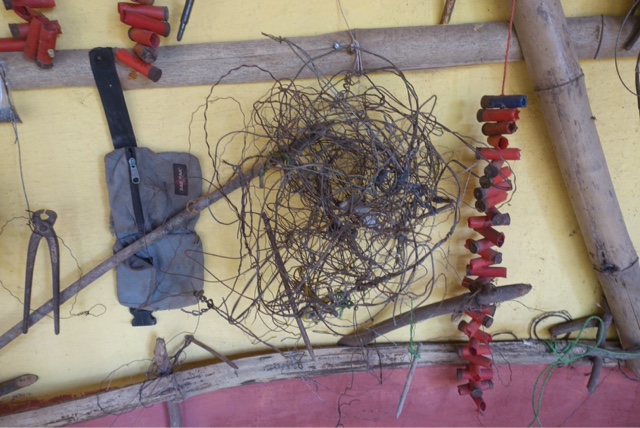 There were lots of masks for sale in the gift shop- 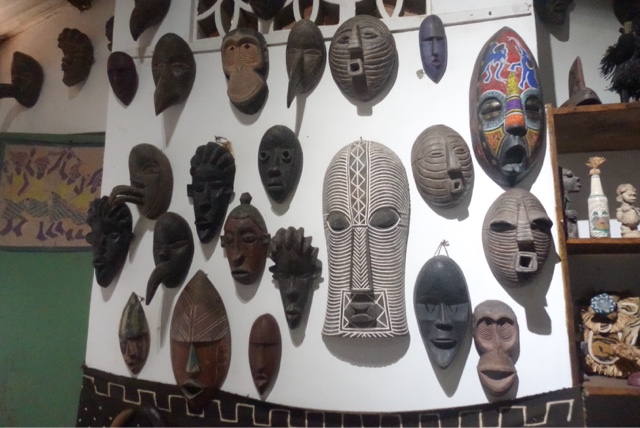 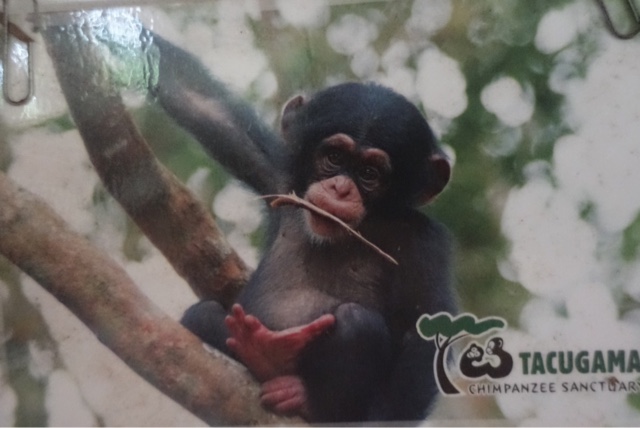 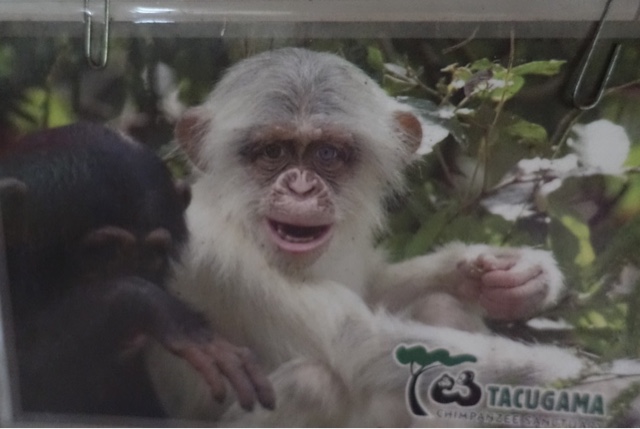 The actual 'sighting' of the chimps was lame- 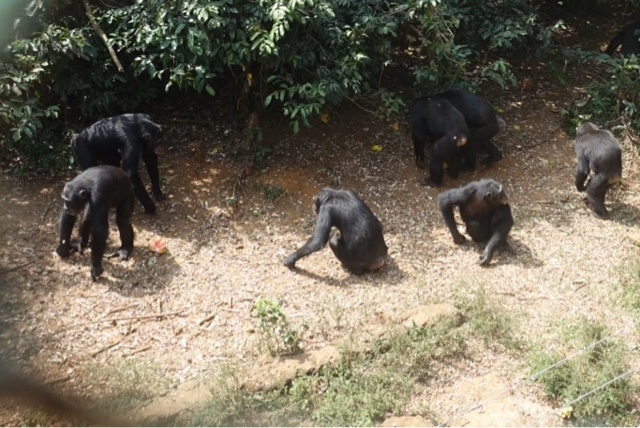 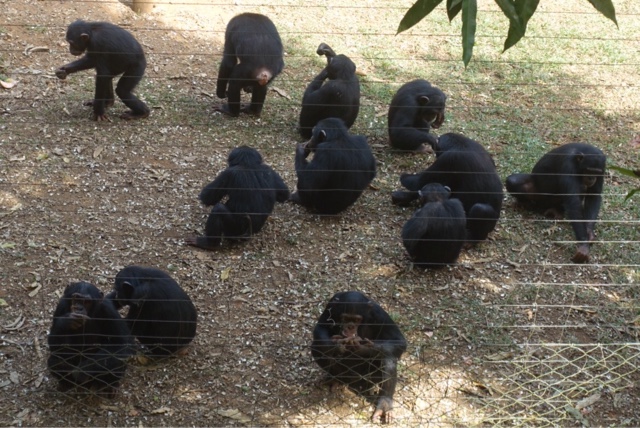 One funny fellow drank water out of a pond using a large leaf as a cup and this fellow did all kinds of tricks.  He played witih the tire tube, jumped up and down on it, then hid his eyes, clapped, and spun around.  He reminded me of my grandson Nico - doing tricks for applause- 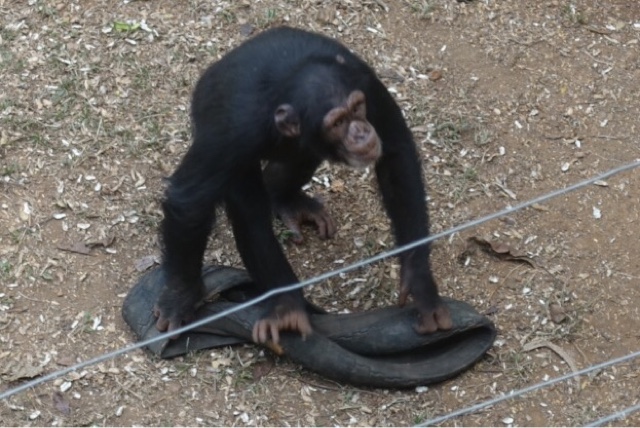 Eight months after mating, females give birth to one baby.  Twins are rare - only one in 400 - 500 births.  From three to six months, the baby travels on its mother's back.  At three or four years of age, it stops drinking milk and starts to eat solid food.  At eight years, it's an adolescent but still stays with its mother.  At thirteen, a female chimp will breed and they may leave their group for another.  Chimps are in their prime between twenty and thirty years.  Females will have a baby every five years.

Chimps have different facial expressions, depending on what they're thinking- 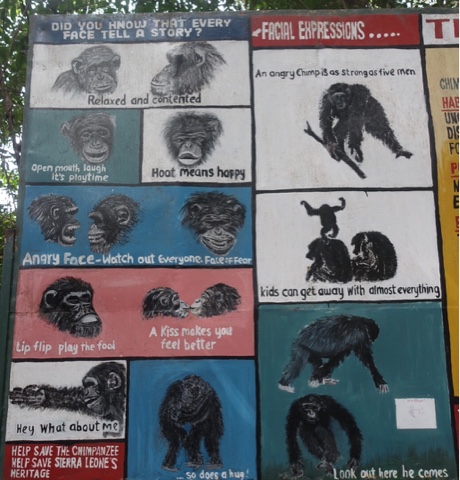 There is a quarantine area where newly received chimps stay for 90 days until their health is evaluated and they become accustomed to a new diet and different housing.   They are vaccinated for tetanus, polio and other human diseases because they are genetically similar to us at 98.6%!  Education seems to be key to their protection.  If the center can teach kids that harbouring chimps is wrong, they can get the kids to squeal on their parents and then they can do their rescue work.  There are only about 5500 chimps left in Sierra Leone.  Deforestation, building and poaching for food is what is wiping out the animals.

The area around Freetown is very hilly and smoky from the burning plastic.  It stinks- 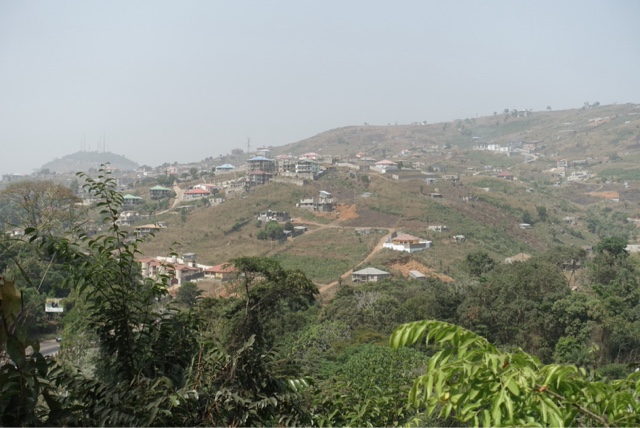 Driving home: few women have their natural Afro hairstyle.  They wear wigs or have straight hair braided in.  These women were wig shopping- 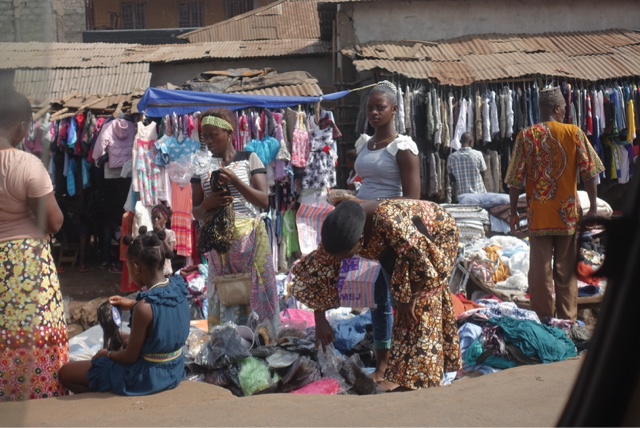 This is quite the hairstyle- 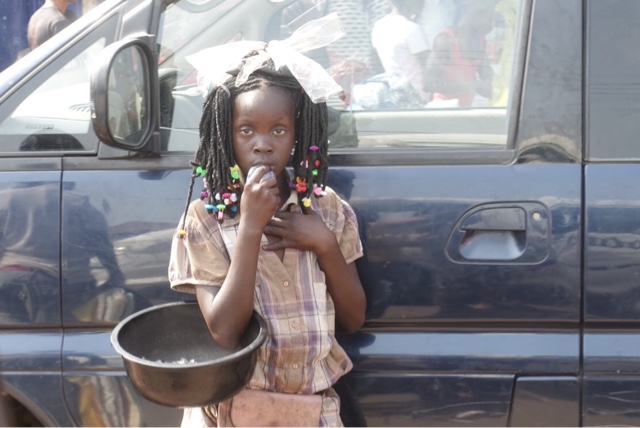 Back in our room, we lose power about 6:30 am.  We have a ceiling fan that keeps us cool enough during the night.  I love the wiring- 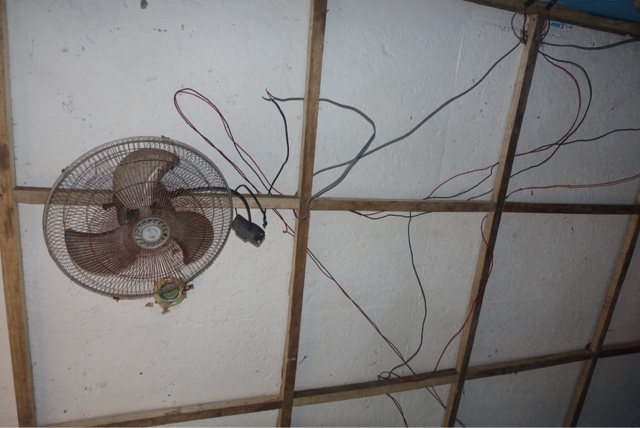 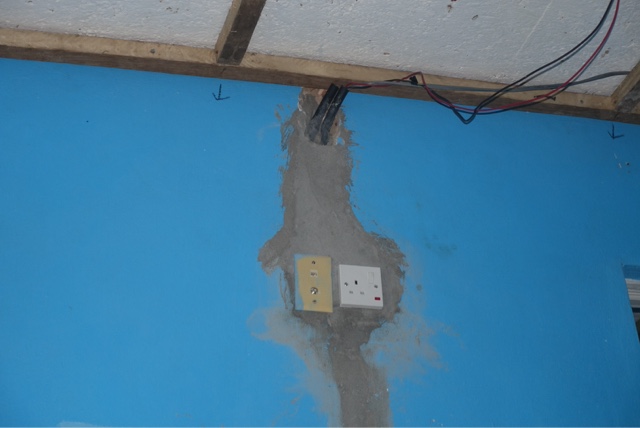 When we got back from Freetown, the beach and our camping area were packed.  There were hundreds enjoying New Year's Day.  Music was blaring and people were swimming.  Tall Brian, Short Brian, Norm, Terry and Don bought supper consisting of shrimp, lobster and fish!  It was delicious and very generous on their part.  As the night wore on, we were all sitting in a circle.  I noticed a young man standing very close behind our group to my left.  That's pretty normal for Africa because they are very curious about us: what we're eating and/or what we are doing.  I told him to go away but soon he was to my right, motioning that he wanted food.  I told him we didn't have any left and glanced toward the kitchen tables and in a flash, he grabbed my cell phone that was on my lap!  I yelled out and soon the chase was on but it was dark and he was very fast and very black.  Terry said he was within 3 meters of him but then he dipped down a sand dune towards some rocks and disappeared.  As I was walking along the beach among the crowd searching, a man approached me and asked what was wrong.  I must have looked upset.  I told him and he took my hand and we walked back to our camp.  He said he was the Sierra Leone ambassador in Moscow, just home for the holidays.  He talked to the manager at our site for at least 15 minutes.  I'm not sure what he said but the manager hung his head the whole time and nodded.  I was very wound up and in shock really.  I hope they can't crack into my phone with the password and I've also visited the iCloud site and once my phone is connected to wifi, everything will be erased.  According to a local woman, we should have been yelling Teef!  Teef! instead of Stop! STop!  99% of the people are good and they would have joined in the chase.

During supper, Leanne was busy preparing fake flights and hotel reservations for the 15 or so who need their Nigerian visa.  Tomorrow, someone will take the USB to Freetown and get everything printed so Thursday morning they'll all go in to the Nigerian embassy to submit their documents, hoping the  visa will be granted that day because of the extra $78 they'll pay!  Such a bullshit ripoff!.  Luckily, I already have mine so I don't have to fight the crowds, nor breath the pollution!