I decided this morning that I need to change my attitude. If I’m going to be in India for the next six weeks I don’t want it to be six weeks from hell and so if I look at everything positively maybe it will be OK.

I left the hostel before seven because I was up at 4:30 thanks to dogs that were barking so loudly I thought they were under my bed but I had had enough sleep anyway.  While waiting at the metro, I started visiting with Vicki who spoke perfect English because as he explained, his father is a diplomat and they have lived in numerous places worldwide- London, Bangkok, Jo-berg and now back to Delhi.  His father has applied to work at the Indian embassy in Ottawa and Vicki plans to follow him if he gets that posting. He knew all about the visa dispute between India and Canada.  I  was going to the airport and he got off two stops before me so we visited for about an hour.  I thought - See!  Positive thinking is working! I got to the airport, got checked in and then had an hour and a half before boarding. I know that’s too much but I had absolutely no anxiety this morning,  so I’ve got my flight issues figured out.

The flight was late but that was OK. I realize that there is more to India than city, but the smog and smell remains- 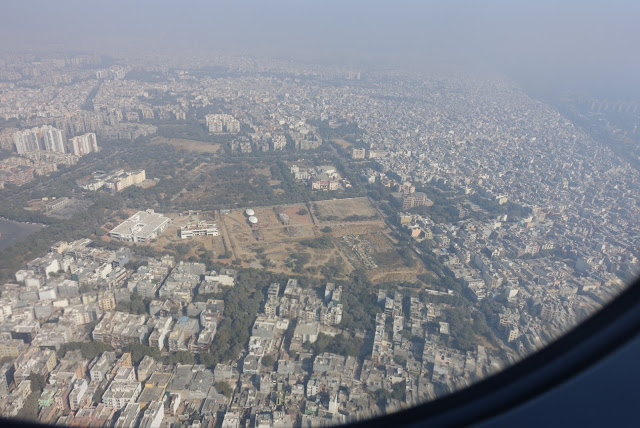 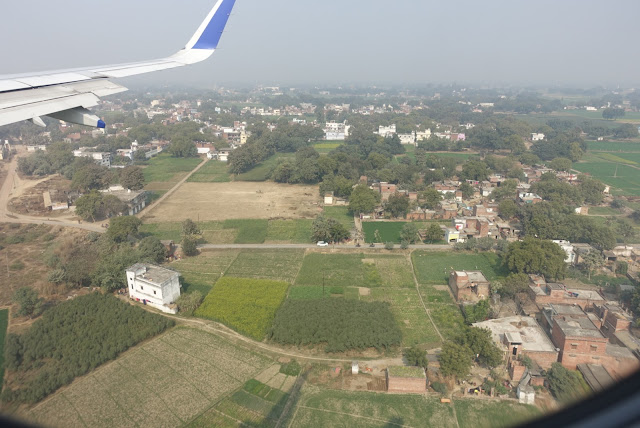 At the airport in Varanasi they have a taxi service where you know what you pay and so away we went. It took about an hour and 20 minutes to get to my hostel for only $14.  The traffic was insane- 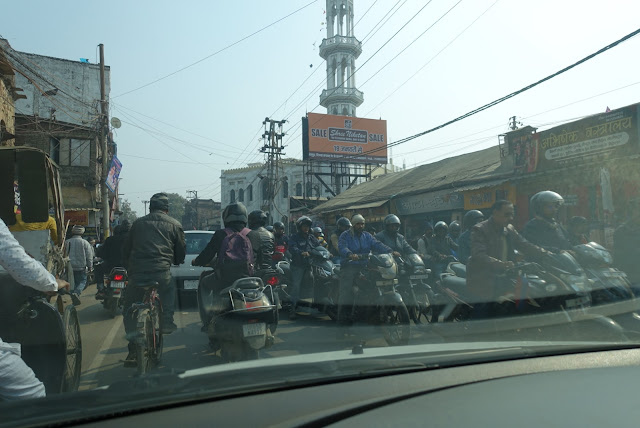 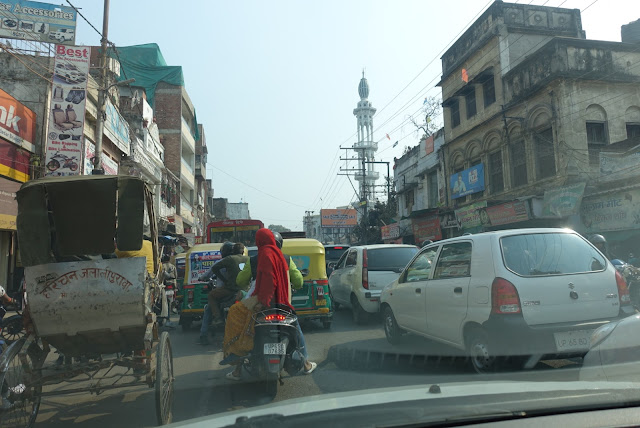 and a young boy and his sister were trying to sell pens to the traffic.  They were the same age as my grandchildren and what a difference in lives they have.  We are so lucky! 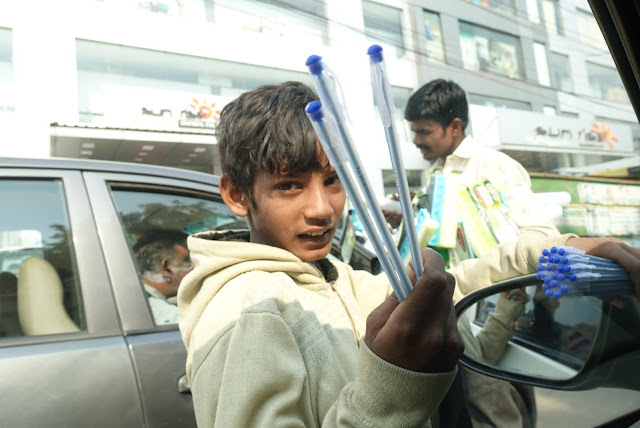 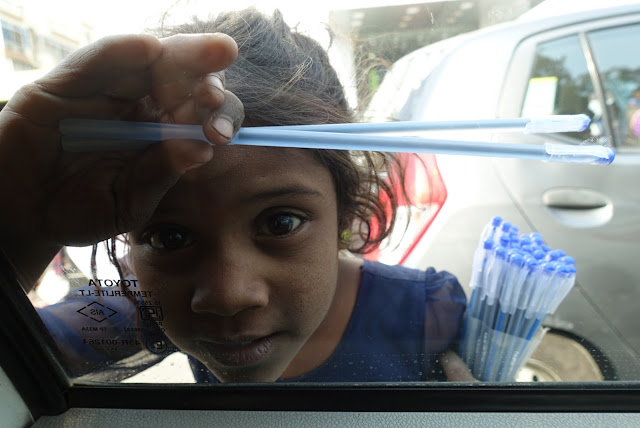 Thankfully my driver never honked his horn once and  I only saw one accident which wasn’t serious- a scooter didn’t  stop in time so he hit the bumper on the back of a van. There were no injuries or damage.

Once settled, and by the way my room is great- 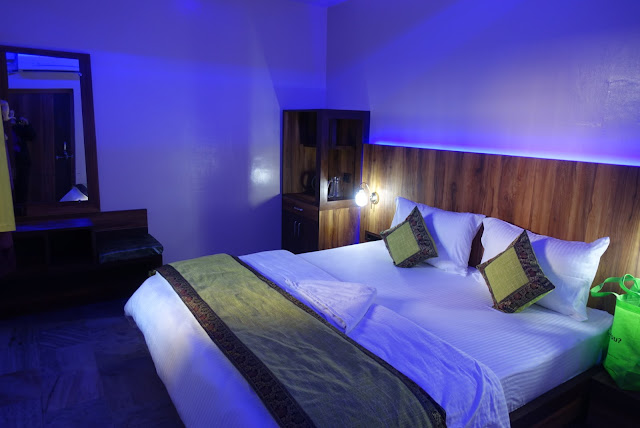 I went for lunch to a place recommended by the hostel which was 15 minutes walk away and absolutely nothing special.  I talked to a tuktuk driver who ended up giving me a ride for free and I hope I see him tomorrow when I move hotels. I want him to give me a ride to the Ganga.  The view from the tuktuk- 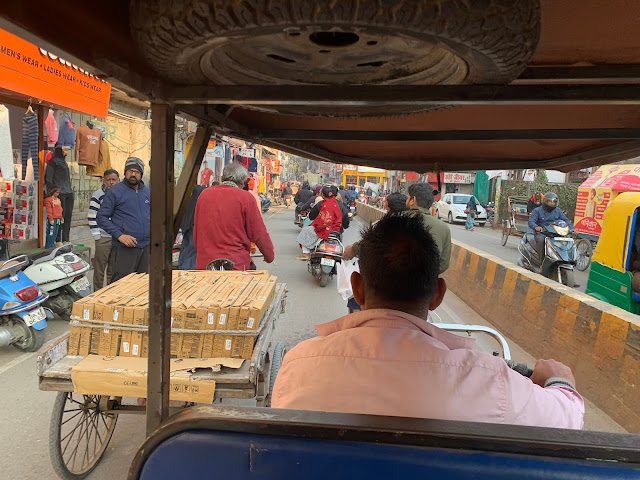 I had dal which is lentil stew, sabji- a vegetable stew with sweet potatoes, white potatoes and carrots, achar which is relish, roti - flat bread and chatni which is chutney - mint and cilantro.  It was mediocre and I was afraid to eat the spice because I don’t want to be sick again but so far so good.  My favourite part was the fennel seeds and sugar that came with the bill.  You spoon a mixture into your hand and pop it in your mouth- 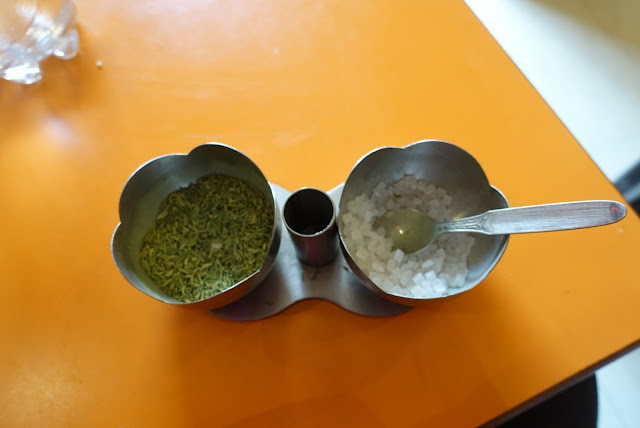 The traffic is unreal so I decided I can’t survive India alone. I looked for a liquor store on Google Maps and lo and behold there was one practically beside the restaurant. I walked up and down the street a while looking for it and finally ask someone. No wonder I couldn’t find it – 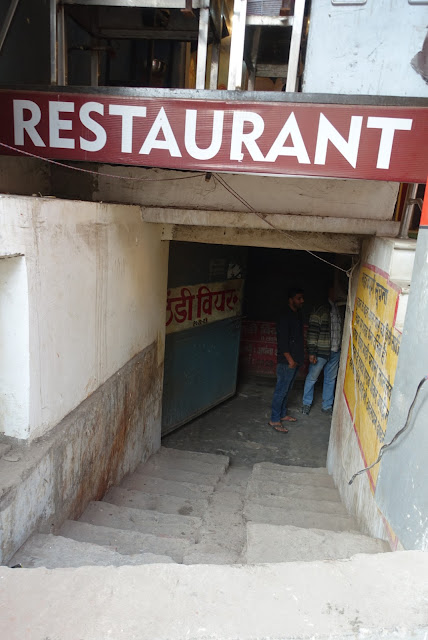 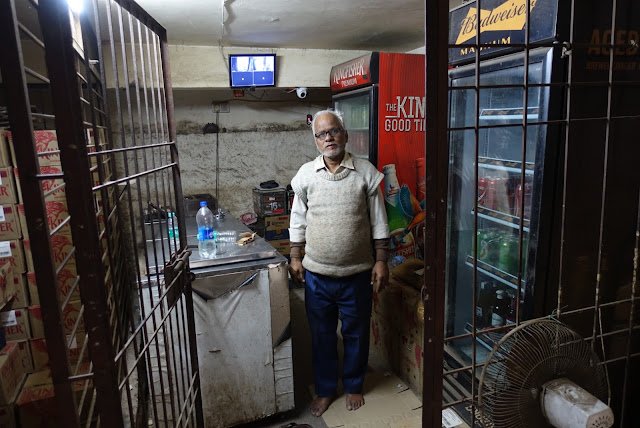 With beer in hand I decided to walk down to the Dashashwamedh Ghat where every evening there’s a ceremony at 6 pm.  I am moving to a hostel on the river tomorrow so I will see the ceremony then. There were already a lot of people gathered by 4:30 – 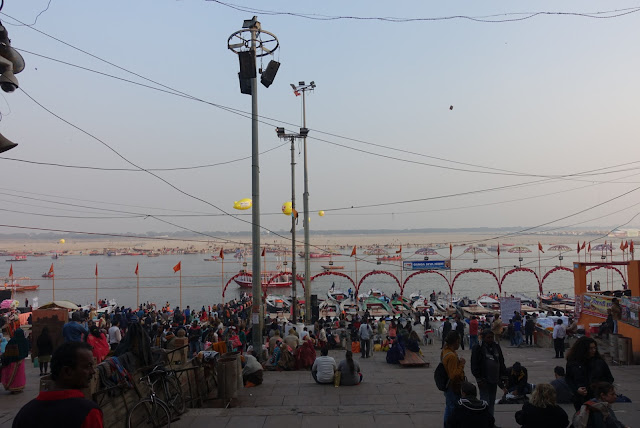 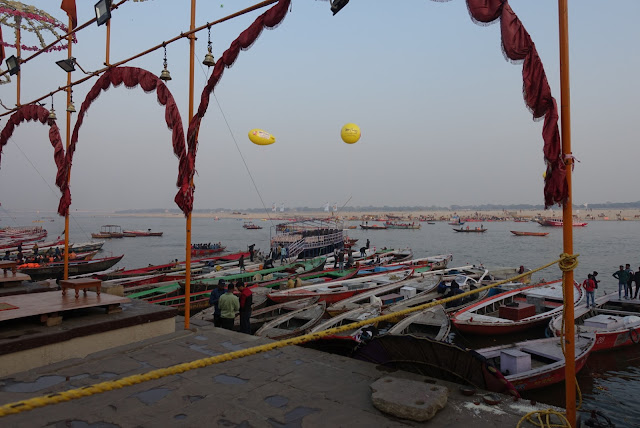 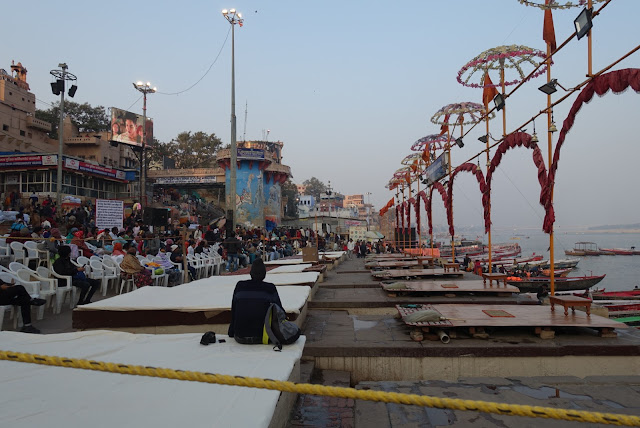 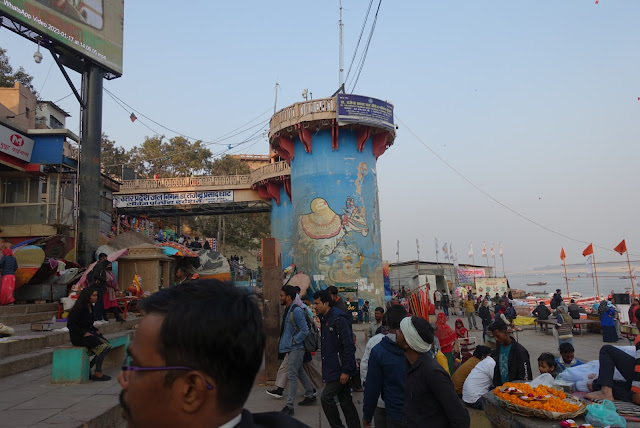 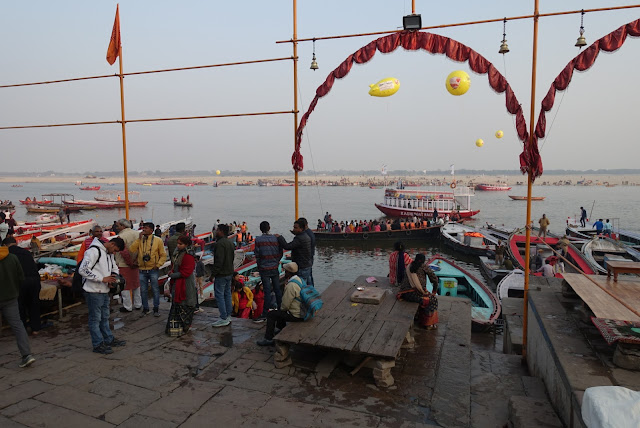 A nearby Hindi temple- 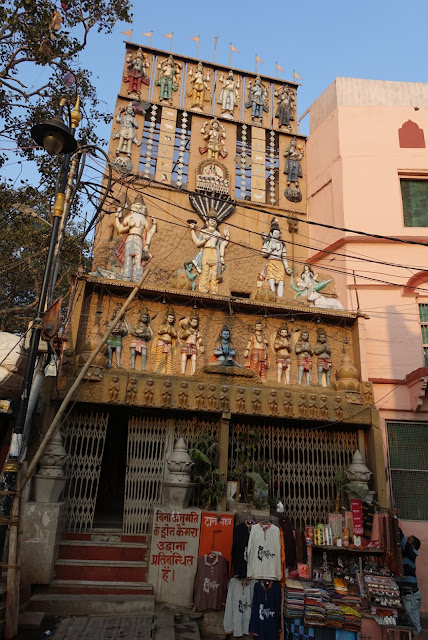 and paraphernalia.  The problem is few speak English for me to ask them questions- 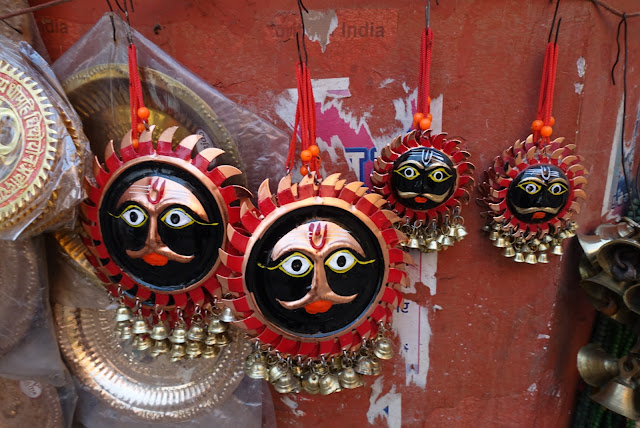 Again I saw many cows walking abandoned on the street and learned that they are neglected and left to run wild because there is a national ban on slaughtering cows and once a cow is no longer productive there is no point in feeding it so it is allowed to wander. There are 5 million cows running loose and many die from eating plastic- 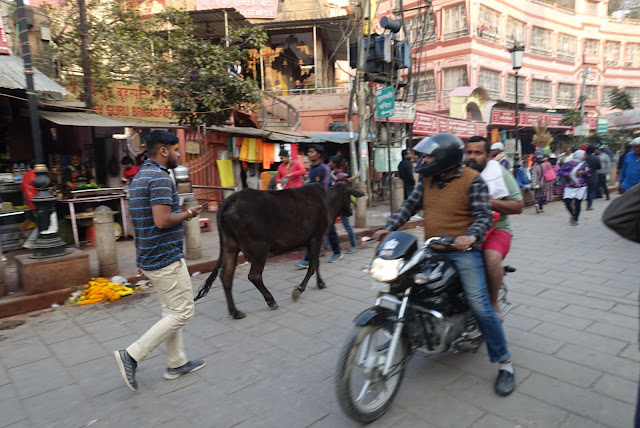 They even have a monument to cows- 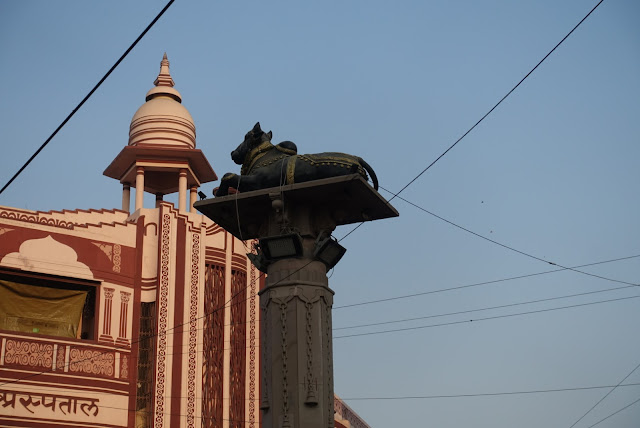 Walking along I met a lot of people.  I walk towards the traffic but am pretty sure I’m going to get hit by a motorcycle before I’m out of here- 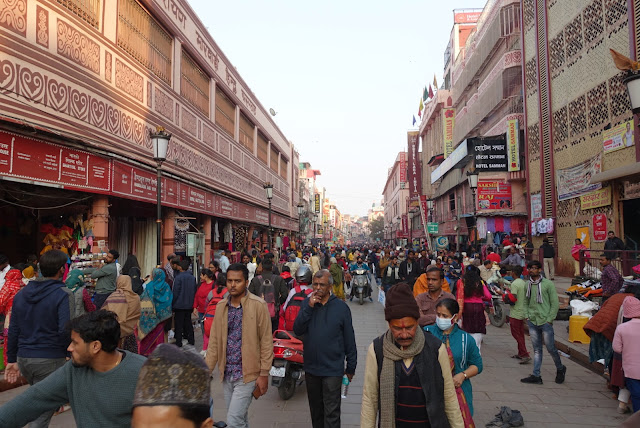 They were wearing orange and had painted foreheads.  Red dots are called bindi or pottu.   They’re made from a paste- 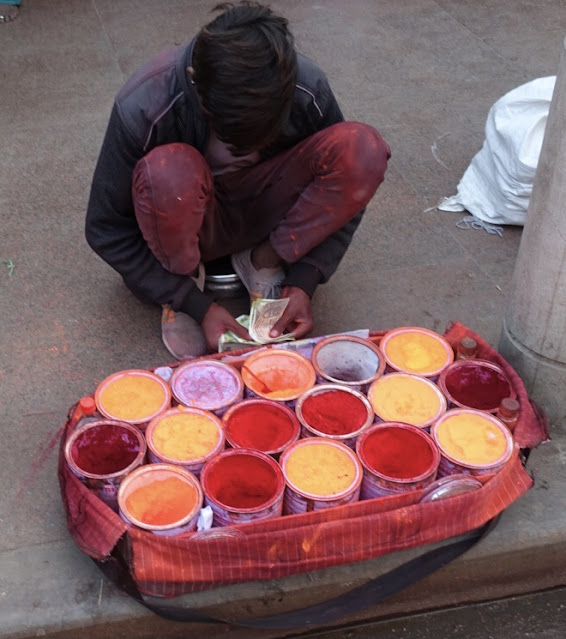 called kumkum which is made of turmeric powder.  The yellow turmeric is mixed with lime juice so it turns bright red.  Followers of Lord Shiva are the Savi sect and they mark their foreheads with 3 horizontal lines because many Hindus believe people have a third eye which sees spiritual truths.  It’s located on the forehead between the eyes- 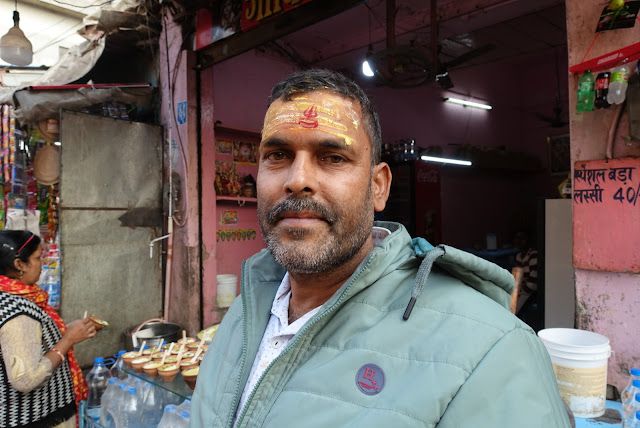 Not sure what’s going on here- 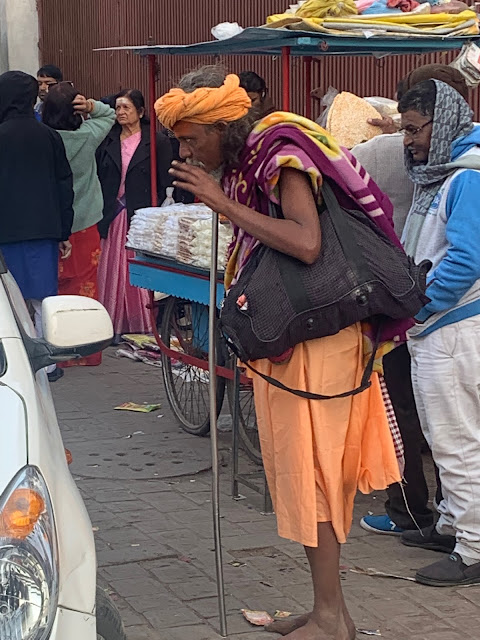 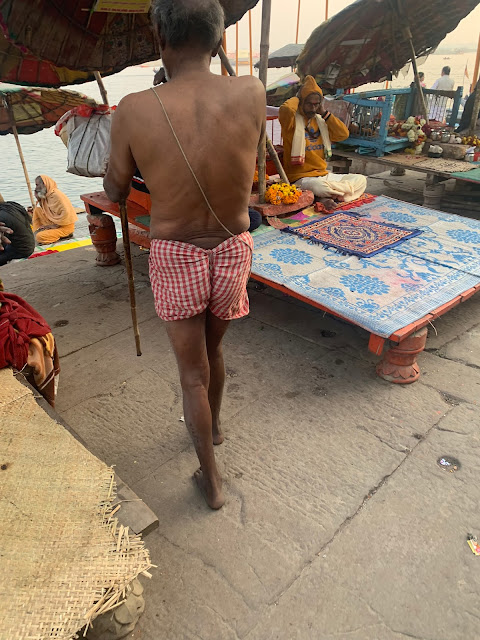 A decorated car for a wedding- 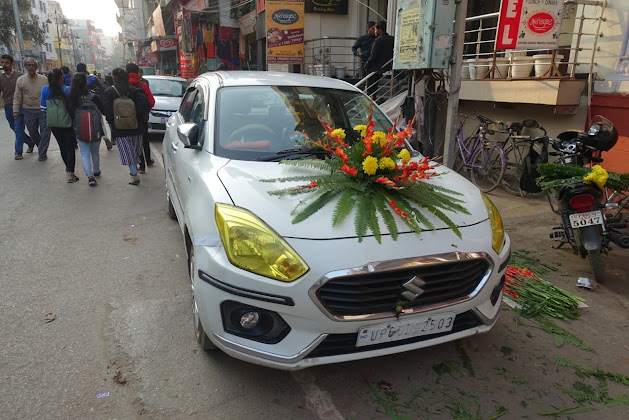 I’m hoping for a great sleep and in the morning I will move to my new hostel.  Varanasi is a very spiritual city but for me it’s hard to get into that with such constant noise. Maybe tomorrow will be better.