Happy 34th birthday to my favourite son-in-law Mitch! I hope you have a good day without me! are well marked but there are so many cars that there are suspended ceiling signs showing where your car will stop so you’re in the right spot at the right time to board.  Often the train stops only for a minute and you have to really hurry to get on so you better be standing where you need to be.  I had been sitting for a long time when all of a sudden people started moving down the platform to the right. I got up and had a look and there was the train!  If other people hadn’t noticed and started moving, I would still be sitting there waiting for it to show up!

It was the same type of car as the last train and soon we were on our way. It’s getting a bit sandy in places but there’s still a lot of farming – 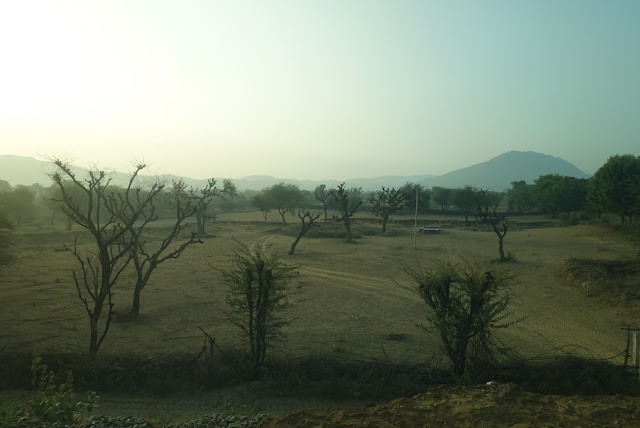 I visited with a woman from Jaipur who grew up in Jodhpur.  She’s going to a wedding today.  Then Chauchan sat at our table and started talking about his ashram and all of the services he provides as well as showing me some of the paintings he was trying to sell. I couldn’t understand half of what he said and I couldn’t hear the other half so I just nodded and said oh yeah oh yeah. He had me re-write an English recommendation he got from a client in 1983. He was carrying a 2 inch stack of reviews, many being 40+ years old. I think he was a quack. However he wasn’t that dumb because he scoped out the kids on the train and in no time had sold two paintings to them for 20 pounds each. I would’ve given him about 1 pound each but he was very smooth and they fell in love with the artwork.

Once in Jodhpur, getting to the Dylan Restaurant and Guest House was easy and I think it’s going to be okay.  The owner loves Bob Dylan, hence the name.  He has another guesthouse in Jaisalmer that’s called Bob’s.  There’s a beautiful rooftop lounge- 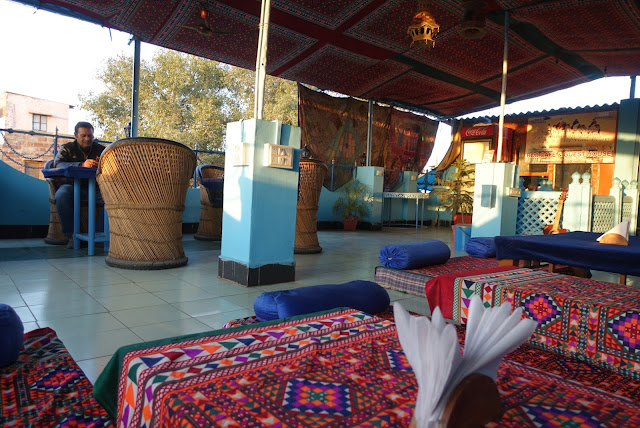 with very comfortable beds.  The view is nice too- 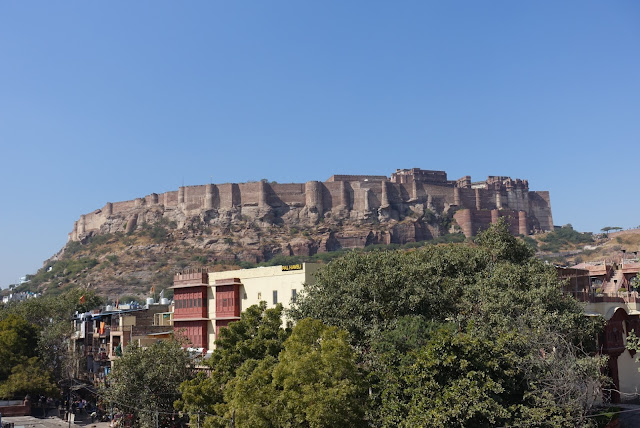 of Mehrangah Fort which I plan to visit tomorrow.

I walked to the Clock Tower- 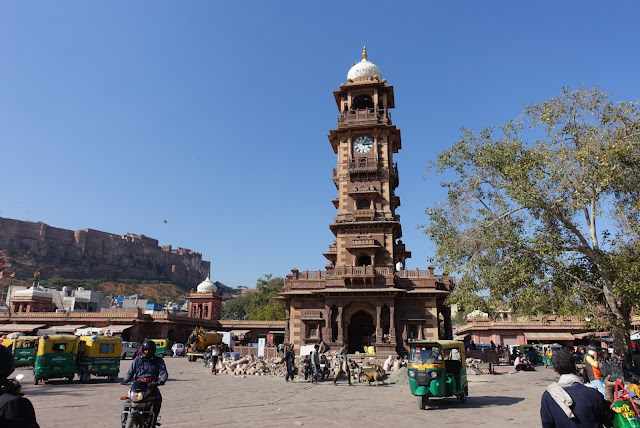 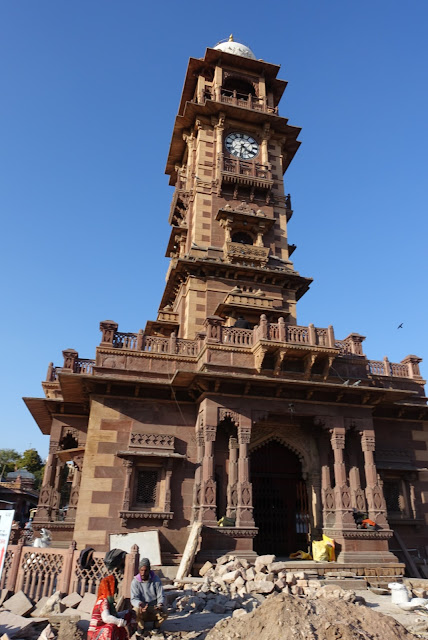 which is in Samar Market- 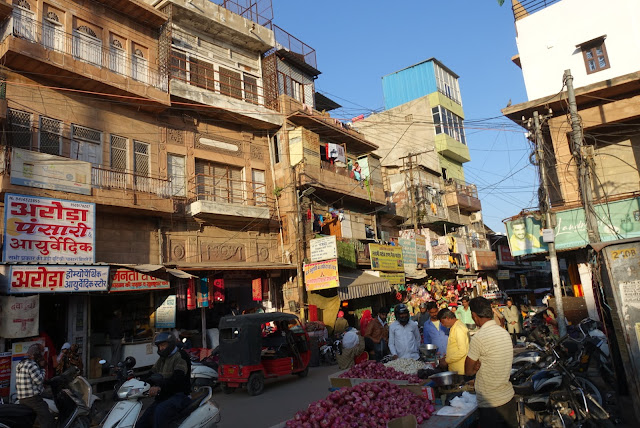 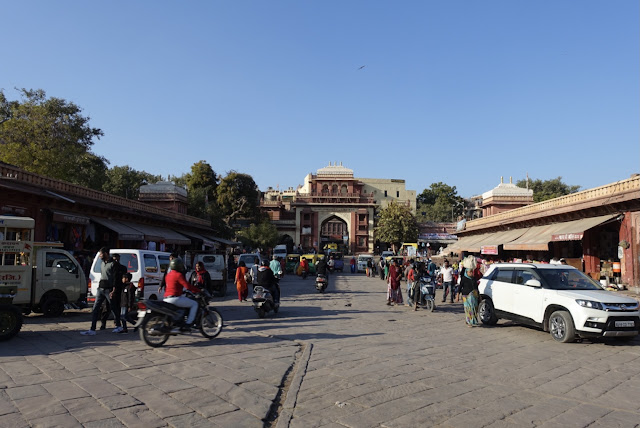 to a very small old town filled with shops.  Indians are as commercial as North Americans - they smother the shops, but thankfully this place is WITHOUT the constant hassle.

He’s maybe not so typical- 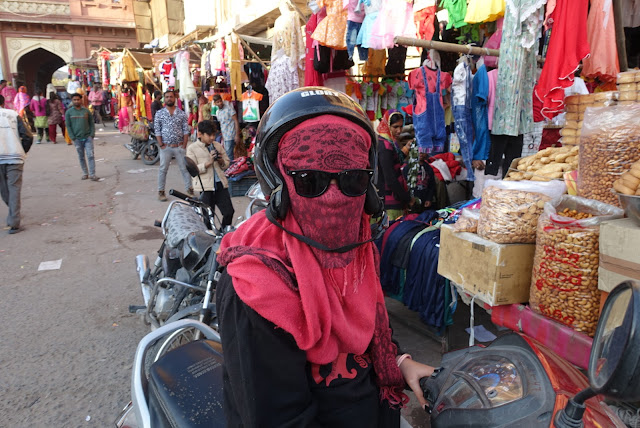 This guest house doesn’t take credit cards and I need to pay for my yoga course with cash so I’ve been looking for an ATM that will accept my card.  I found one! so now should have enough money to last until the end of the trip.

I visited a spice shop where the proprietor is a woman! So rare! She said her father started the shop 45 years ago and when he died, he had seven daughters so each one now has a franchise. There’s even been a documentary produced about their shop- 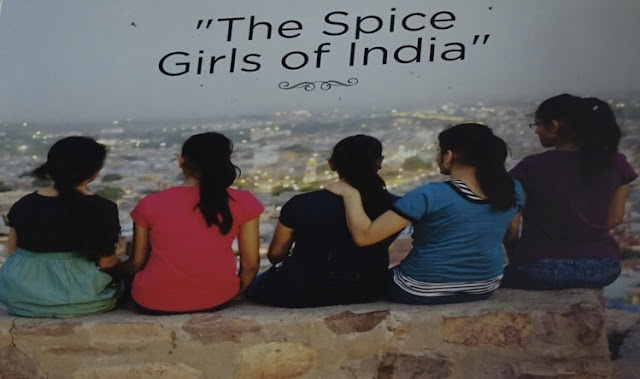 A couple from Slovenia came in ready to buy quite a few spices so I sat and learned about them, smelled them and tasted them. Green pepper is the mildest and white pepper is the hottest but doesn’t have an odour.  I don’t have any room in my backpack to bring any home which is unfortunate – 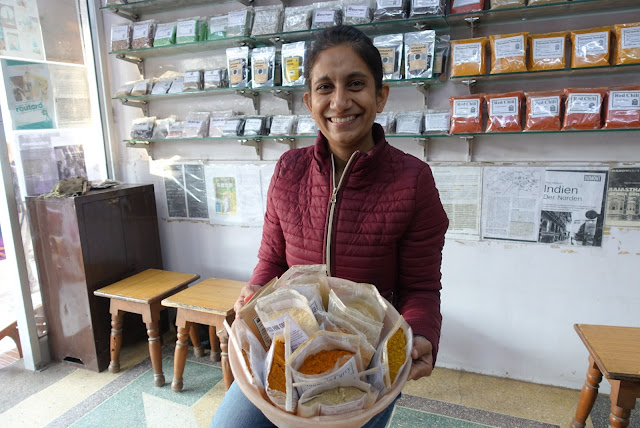 I came back to the hostel and enjoyed the rooftop sunset.  There’s a bit of chaos below- 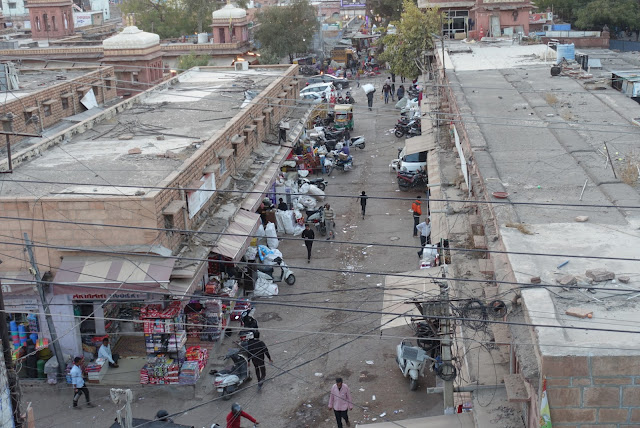