I had to check out by 11 and my bus didn’t  leave until 6:35 pm so there was no rush to go to the Rockefeller Archaeological Museum and to walk through Old Jerusalem one last time.

The streets were really empty.  This is strange because there’s never a day off anymore at home- 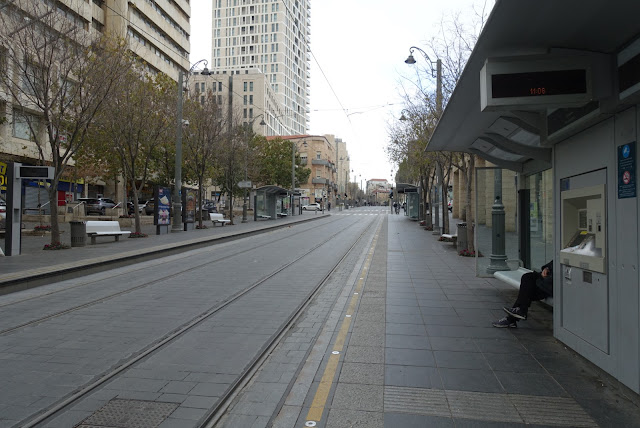 The museum is excellent.  The larger items are explained and there are many show cases full of smaller objects- lots of pottery, jewelry, flints and other tools.

In 1457 BC the Egyptian pharaoh Thutmose III defeated the Canaanites at the Battle of Megiddo which is the earliest documented battle in history.  Following their victory, the Egyptians ruled the area for 350 years.

The statue of Rameses III is made from local basalt and is life sized.  It was found at Beth Shean and dates from (1185-1153 BC)- 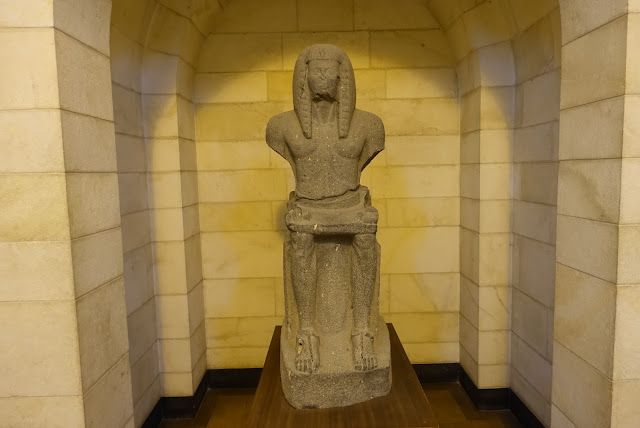 This stela commemorates the victory of Seti I (1294-1279 BC) against towns around Beth Shean.  The hieroglyphic script explains the battle.  The upper part of the stela shows the king wearing a wig with a circlet.  There’s a uraeus - a royal cobra, rising up from it.  He’s offering incense and wine to the falcon headed sun god Re-Horakhty which is portrayed with the sun disc above his head- 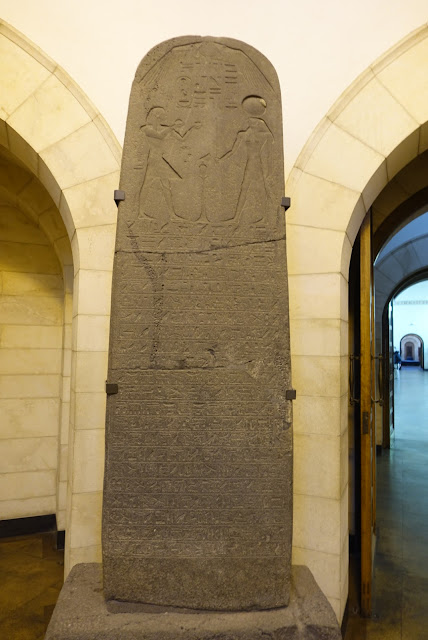 There’s a fresco sun dial dating from more than 6000 years ago.  Because the pigments were embedded in the wet plaster, we can still see the colours.  The Chalcolithic period  was a society of farmers, shepherds and copper masters- 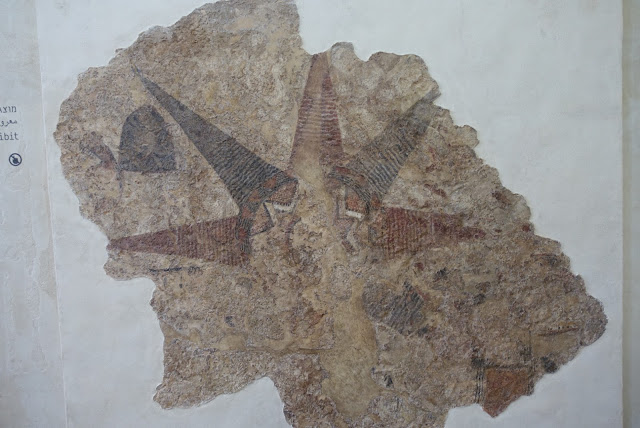 This skeleton of a man was found in Skhul Cave and is from the Middle Palaeolithic Period about 100,000 years ago.  It’s a 40-50 year old Homo Sapien.  Neanderthals also lived during this time and both groups were the first to bury their dead.  This skeleton had a flint end scraper in his hands- 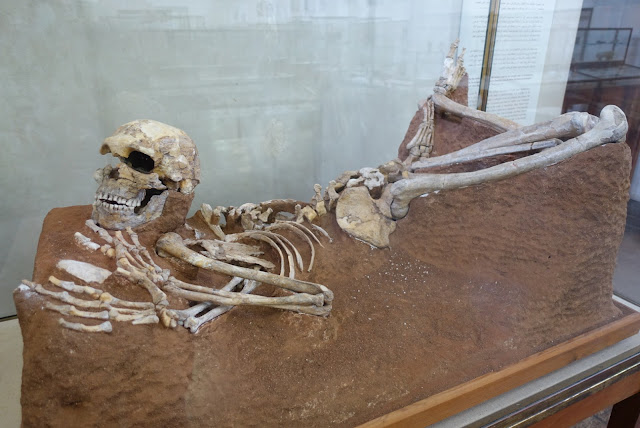 There is a great display of carved wooden doors from the El Aqsa mosque which is one of two mosques on the Temple Mount.  They date from 705-714 AD- 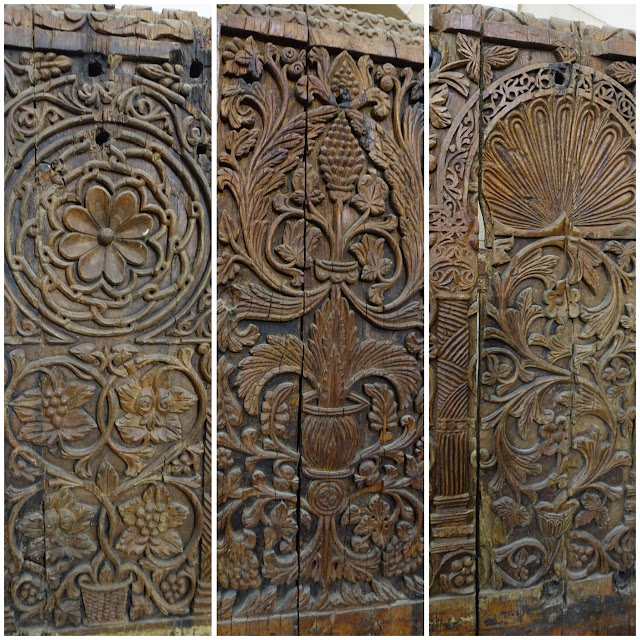 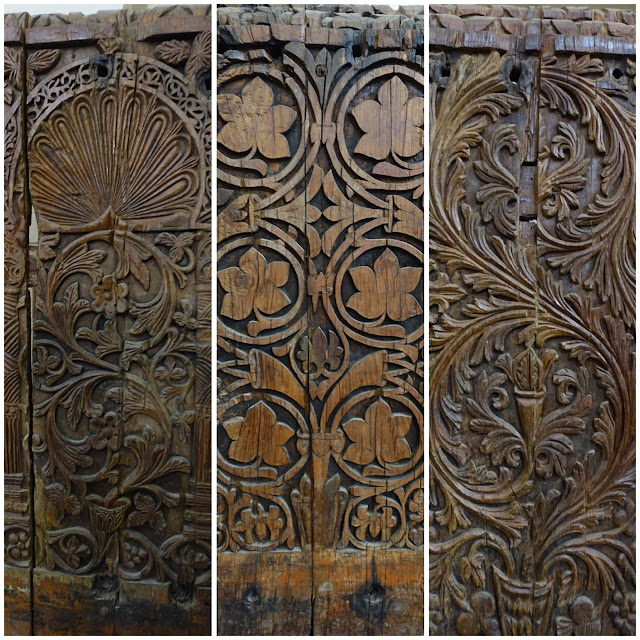 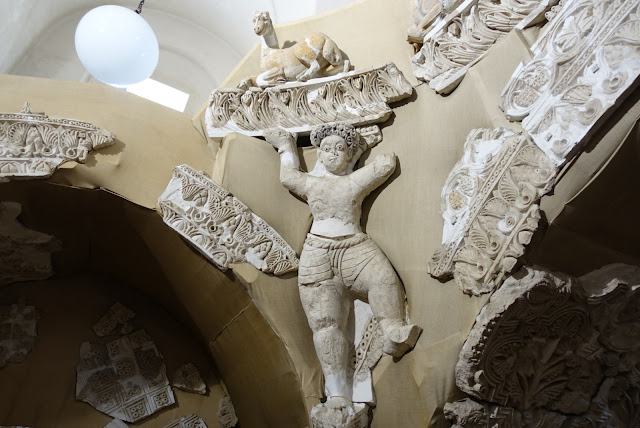 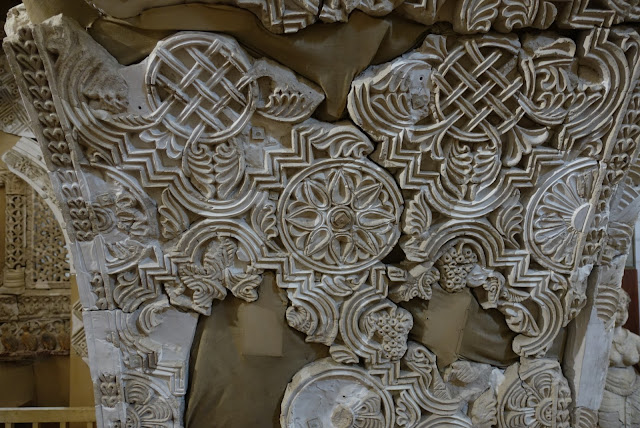 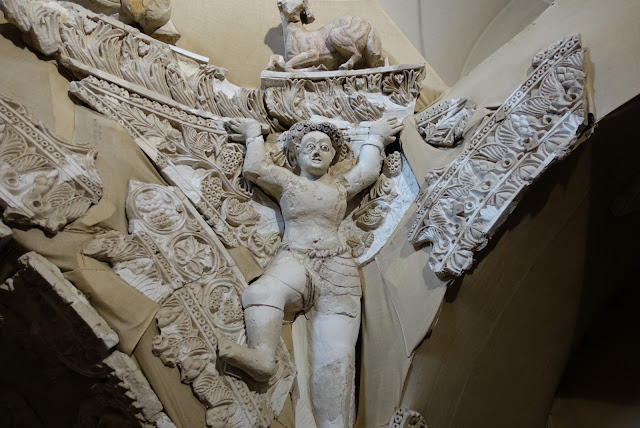 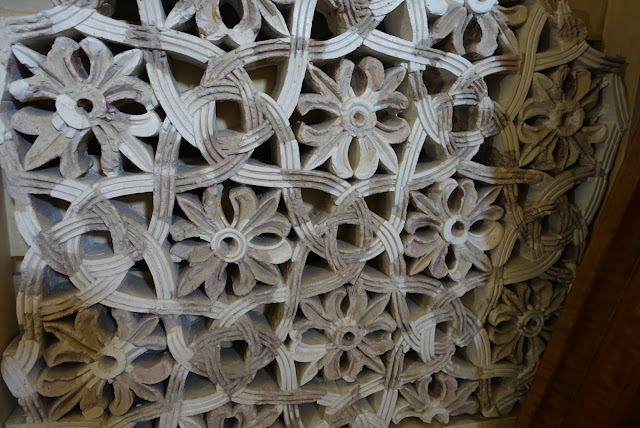 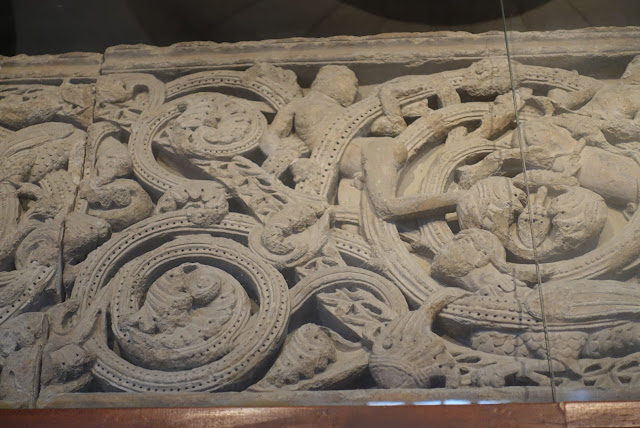 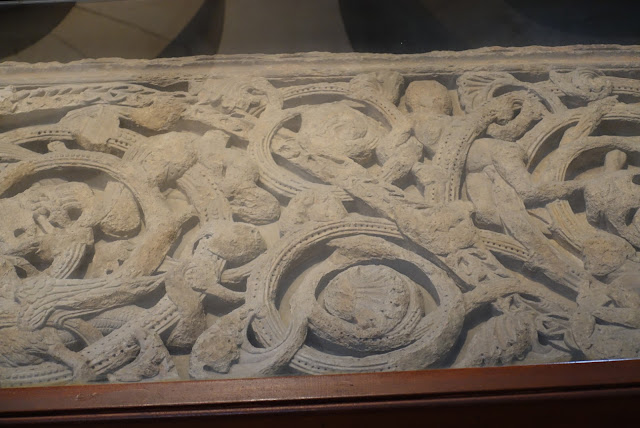 Is this a crib board? 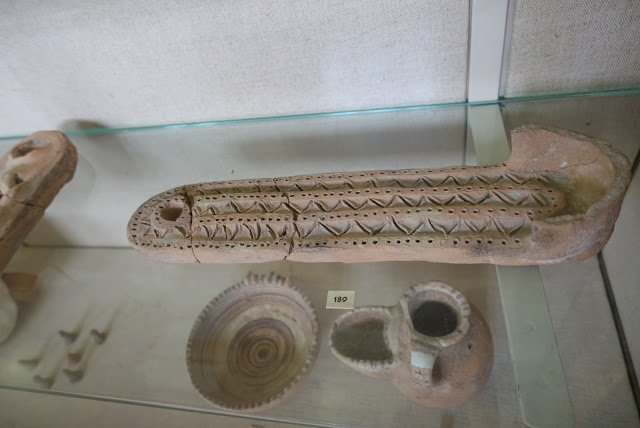 This tomb is an exact reconstruction with all original objects of one found at Jericho in 1954 by the British archaeologist who says there is no archaeological evidence that Joshua built a wall in Jericho.  Anyway… here is a man buried about 1600 BC.  Pieces of wood furniture are still preserved because gases from very deep volcanic strata seeped into the cave killing any bacteria that might have been in there which would have caused decay and led to decomposition.
Piles of bones have been pushed to the side to make room for the next corpse.  They think it was first used before 2000 BC.  The man is lying on mud bricks and a woman and child are behind his head on the right.  There are animal skulls and bones in a bowl on the right which would have been food offerings.  On the left is a wooden table with a stool or couch nearby- 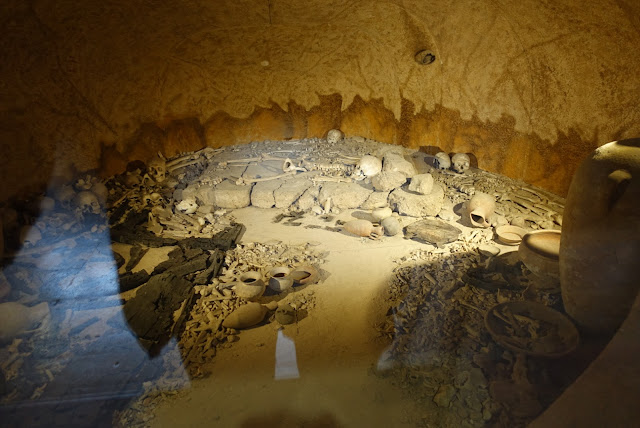 While looking at all of this I couldn’t help but think of a former student, Brandon Horrell. After Grade 12, his plan was to go to the University of Calgary and become an archaeologist. I wonder if he did and if so where he is working and what magnificent things he has discovered.
The museum is across the street from Old Town- 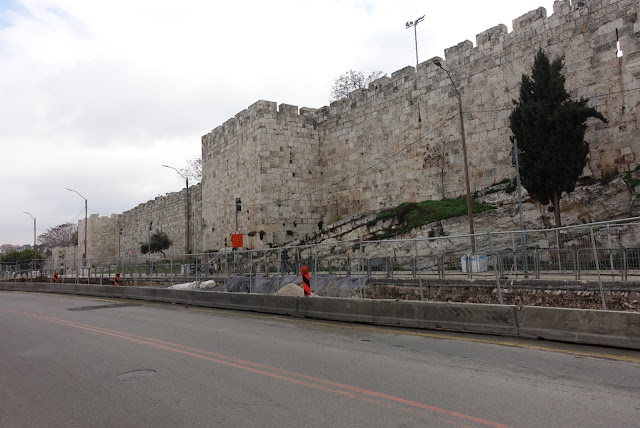 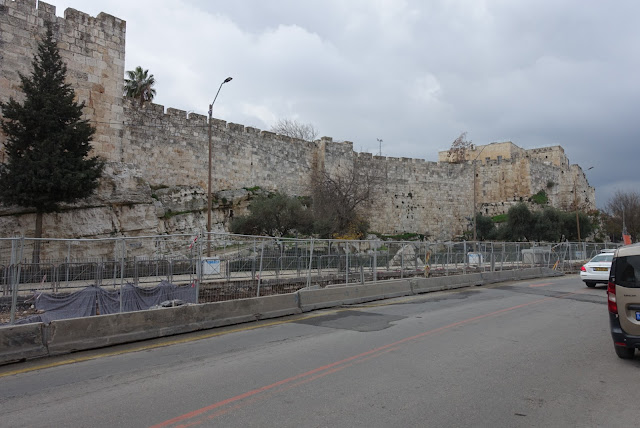 I walked through the Old Town one last time.  It looks a little different today- 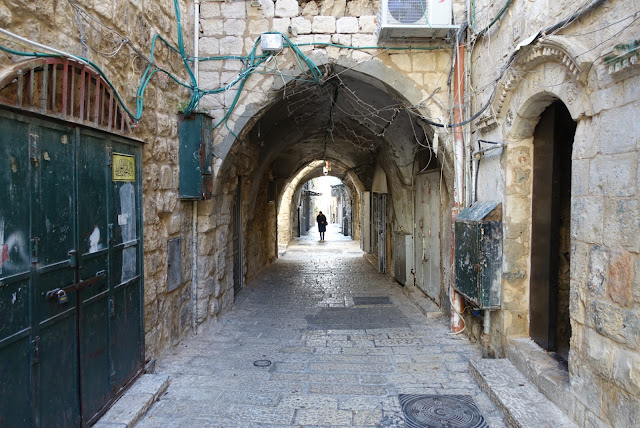 What a cool mountain of spice- 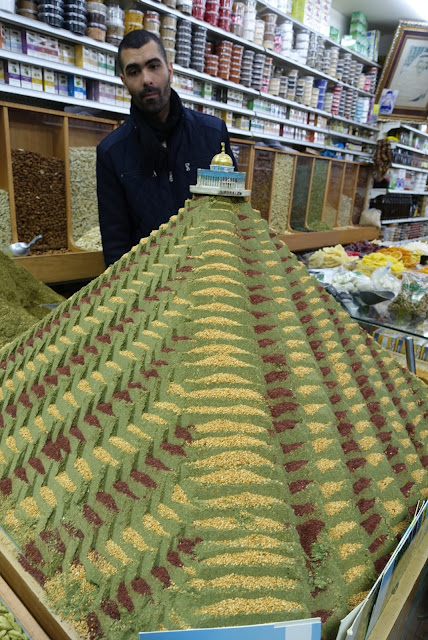 I wanted to make one final stop at the Western Wall. I knew where I was going but a very friendly man stopped me and said it was closed until 3 PM. I didn’t believe him and I knew where I was going so I told him I wasn’t interested in a tour as I knew he wanted to be my guide. He got very angry and yelled at me and hollered “you are garbage!”  He wanted a few shekels for his time spent with me which was unsolicited and about 30 seconds.  I was angry and wanted to go back after him but I carried on.
Of course the wall was not closed so I sat down on the women’s side in front of it.  There, I wrote a prayer, rolled it up and placed it between cracks in the wall. It was a very spiritual experience!
On my way back to the hostel, I got a few sneak shots of some Ultra Orthodox men- 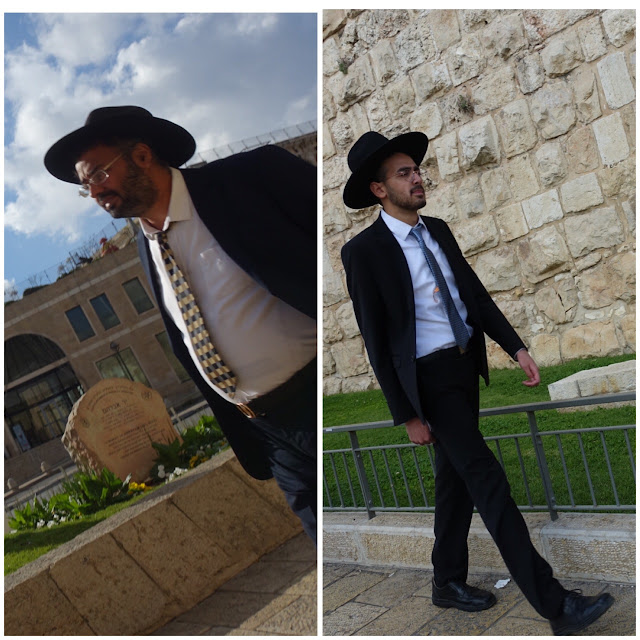 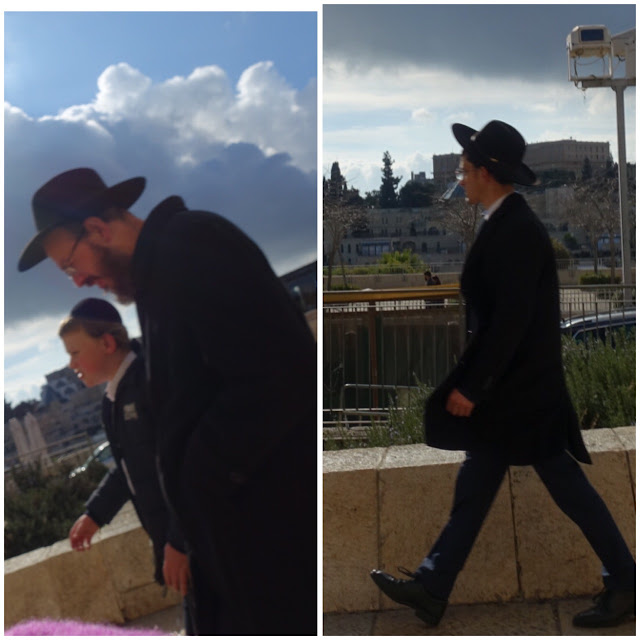 I left the hostel at 5 pm and walked to the main bus station or what I thought was the bus station.  I had been there before, when we went to Hebron.  A Russian woman and I were the only ones in the huge concourse and everything was closed.  I thought that by 6 o’clock it would open up but there wasn’t a soul around. Finally I went up the stairs and crossed the street into the building I should’ve been in all along. It was buzzing with people. Then I was in a panic because my bus left at 6:35 and I had to make sure I had enough money on my transport card and find the bathroom before the two hour bus trip.
The trip was quick and if I hadn’t been watching on my map app I would’ve missed the stop.  I asked the bus driver if we were at Nazareth Central Station and he said yes as he was pulling away! I told him I wanted to get off but my backpack was under the bus.  He yelled at me to hurry up and get off and he was able to open the doors for the undercarriage from inside the bus. I barely had my backpack out of the storage and he took off.
I’m at the Fauzi Abraham Hostel in Nazareth and it’s very different from the one in Jerusalem even though they are related.  It’s a big old house and very cool.  I’ll take some pictures tomorrow in the daylight.  So far there are only 2 of us in the room so that’s a bonus!
I’m looking forward to exploring Nazareth tomorrow.