There were 5 of us in the room - 3 young American medical students who are doing a month long internship in Nazareth and planning to stay at the hostel.  That would gross me out.  Everyone I talked to loved Fauziazur, I think because it’s an old building with such great architecture but it’s cold, the bathrooms are small and cold and the kitchen is poorly stocked.  Two nights was long enough there for me.

I walked to the bus stop and got on with the nicest driver I’ve met since being in Israel.  He was so helpful and not in a rush.  He waited until the older people were sitting before he took off.  He had a friend on and when he wasn’t talking to me, he was talking to his friend.  What a contrast to the yip yo I had getting to Nazareth.  If he could have, I think he’d have pushed me off at my stop to get me off faster. 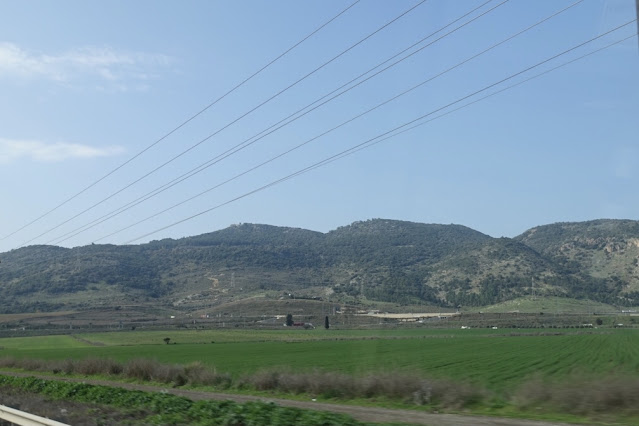 Then he told me a legend about the mountain but I couldn’t understand most of what he said.  I just agreed with him.
It took 2.5 hours to get to downtown Tel Aviv which is a very modern city; very different from Jerusalem and Nazareth.  Not that they don’t have their modern parts, but this is like Toronto or Calgary with tall glass skyscrapers, bike lanes, traffic and parks.  My kind bus driver dropped me off where he shouldn’t have but close to the hostel which I think used to be a hospital - it’s huge- 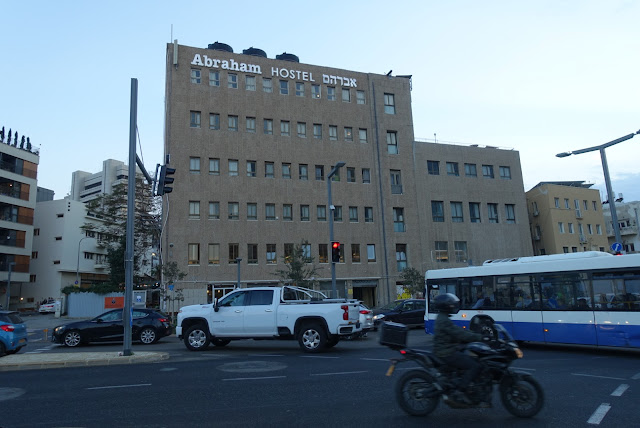 I’m in a 4 bed mixed room and scored a bottom bunk.  It’s not cheap, costing about $55 for a bed- in a hostel!  I do not like sleeping in dorms with men because sometimes they snore but they are respectful, and generally try to be quiet.  I’m here for 4 nights.
After getting settled I had a $25 hamburger - this place is nuts and they don’t have a high minimum wage; I’m not sure how they manage.  I went for a walk and found the market which is typical, then just wandered.  There is a jewelry store next to a bakery next to a bridal store next to a restaurant next to a shop under renovation next to a coffee shop next to a book store- 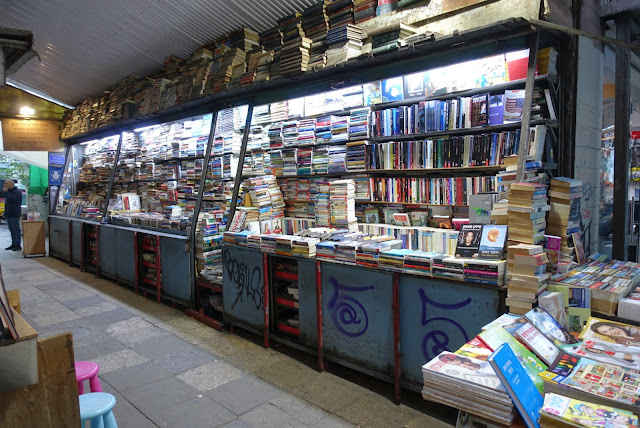 and on and on and on.  There are people and cars everywhere too.
With an account and the app, you can rent an electric scooter.  If I knew where I was going I might try it- 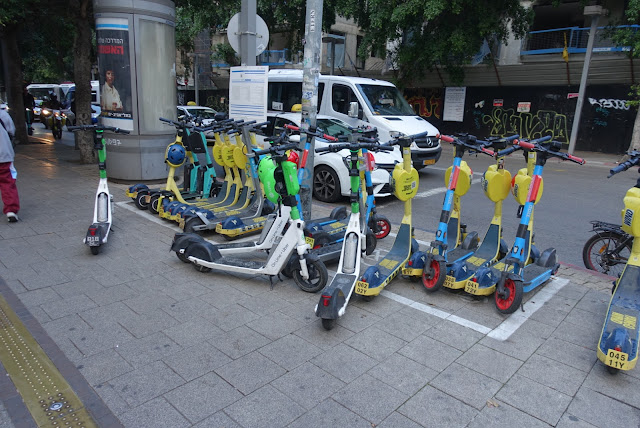 Tomorrow I’m going on a tour to a Kibbutz, Caesarea which is a national park with archaeological ruins and a fisherman village.  It’s warmed up because Tel Aviv is on the Mediterranean.  Maybe I’ll be able  to wear my shorts again.  I’ve been cold for 2 weeks!
at January 09, 2023