I went on a Jaffa tour which is the oldest part of Tel Aviv.  It’s the ancient port and known for biblical stories such as Saint Peter and the mythological story of Andromeda and Perseus.  Jaffa oranges also used to be a big part of the economy.  The guide was a Canadian who talked very fast and told a bunch of “stories”.  As hard as I try, I can’t remember most of what he said.  The tour was 2 hours and we were at his friend’s restaurant for a “break” for at least 20 minutes.  It easily could have been a 1 hour tour but whatever.

Jaffa has been conquered at least 22 times by the Egyptians, Phoenicians, Babylonians, Philistines, Assyrians, Maccabean, Seleucids, Persians, Greeks, Romans, Crusaders, Mongols, Mamluks, Ottomans, French, British and just before the state of Israel was declared in 1948, by Zionist militia.  Just imagine! 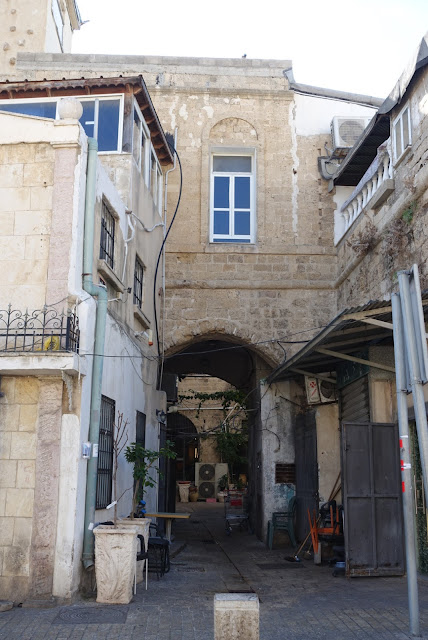 but there is no old town here.
Across the street are nice water taps belonging to Mahmoudiya Mosque which is the largest in Jaffa.  The present mosque was built during the Ottoman period in 1812.  The decorated fountain has Arab inscriptions- 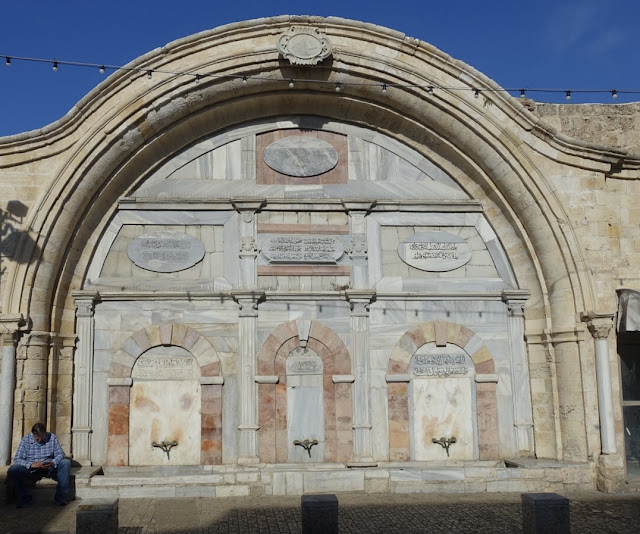 Jaffa used to be about 9 minutes ahead of Jerusalem but as train transportation and Greenwich time was developed, clocks to keep everyone on track were required.  Seven such clocks were built in Palestine during the Ottoman reign- 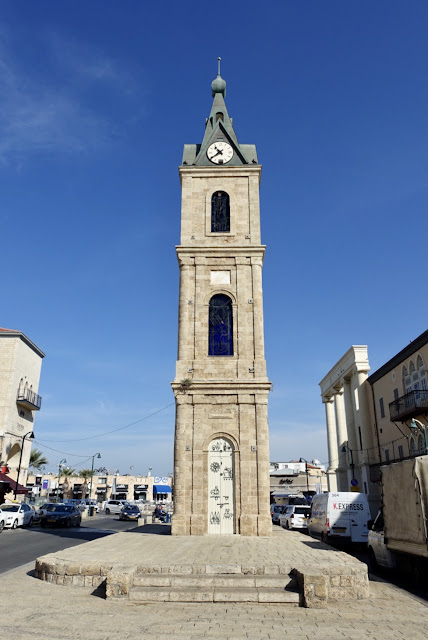 Napoleon captured Jaffa in the Siege of Jaffa in 1799.  He ransacked it and killed not only locals but also thousands of Muslim soldiers who had surrendered and were imprisoned by the French- 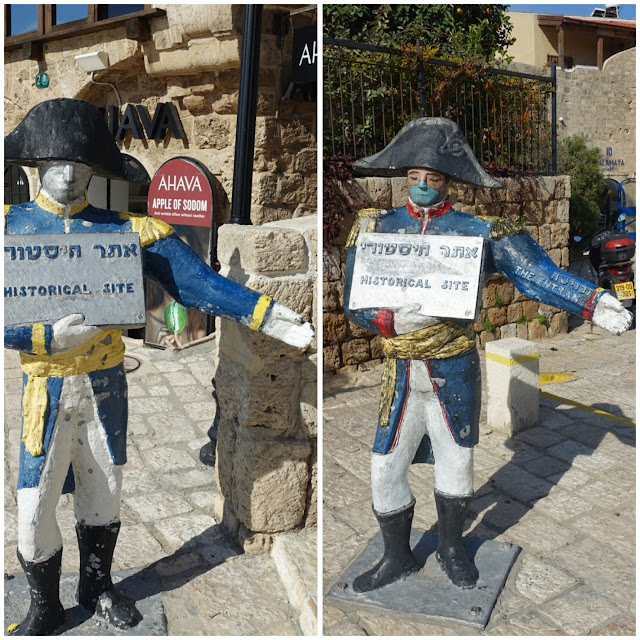 Greek mythology talks about the king of Jaffa who was Cepheus.  His daughter Andromeda was beautiful and Cassiopeia, his wife, boasted that she and Andromeda were more beautiful than the mermaids.  This made the mermaids angry so they complained to Poseidon, god of the sea to punish them. Poseidon agreed and sent huge waves and a sea monster to destroy Jaffa.  King Cepheus decided to sacrifice Andromeda to the monster to please Poseidon so she was tied to the rocks- 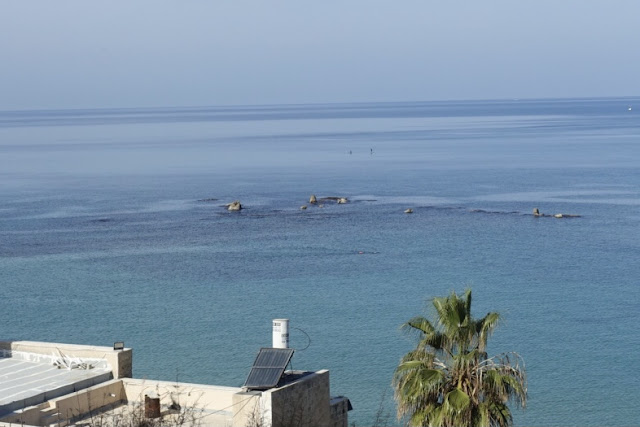 Perseus, son of Zeus who was chief of the gods, happened to see Andromeda and fell in love with her.   Cepheus said Perseus could marry her if he rescued her.  Perseus chopped off the head of the monster and it fell into the water and became the famous sea rocks of Jaffa.

Saint Peter’s Church, rebuilt for the last time in 1909, is so named because according to Acts 9:36-43, Saint Peter raised Tabitha, one of Jesus’ disciples, from the dead-

Today the church offers masses in English, Polish, Spanish and Hebrew.  Traditionally, Christian churches face towards Jerusalem but Saint Peter’s Church faces Rome.
The port is a port.  The most interesting part is getting down to the water- 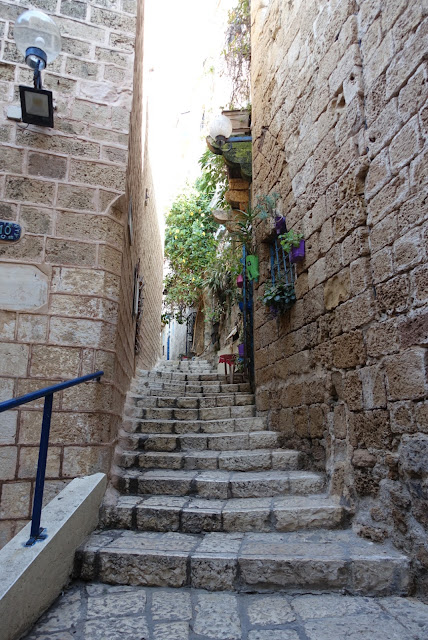 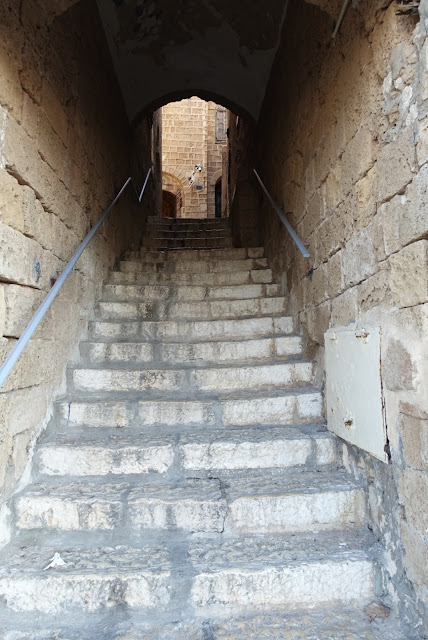 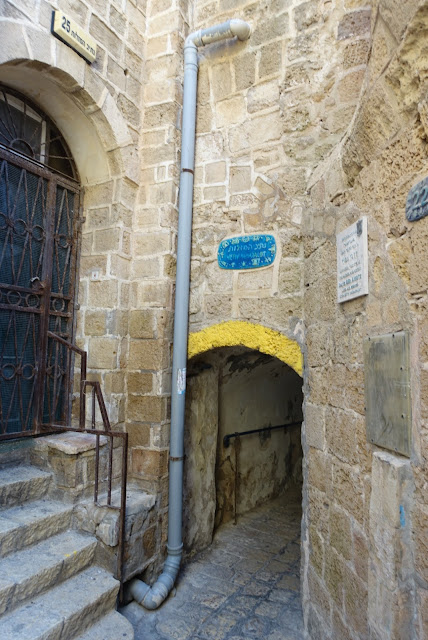 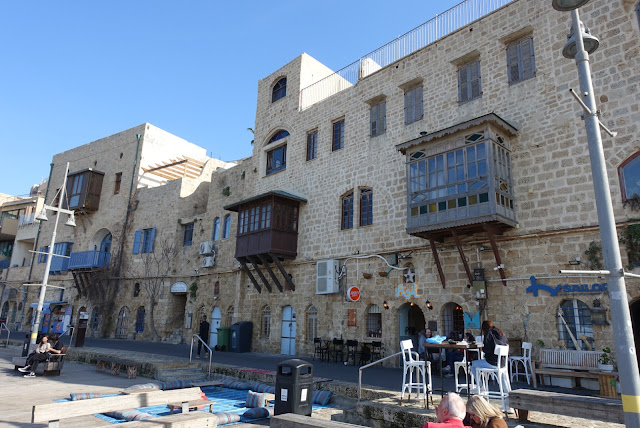 The beaches and skyline are lovely- 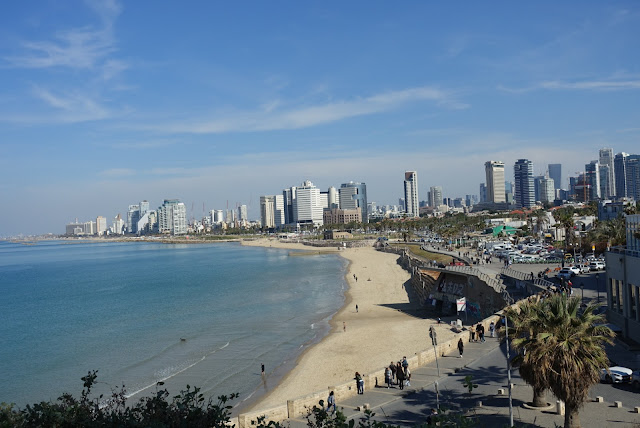 Archaeology excavations have discovered an Egyptian fort from the time of Ramses II from 1400 B.C.- 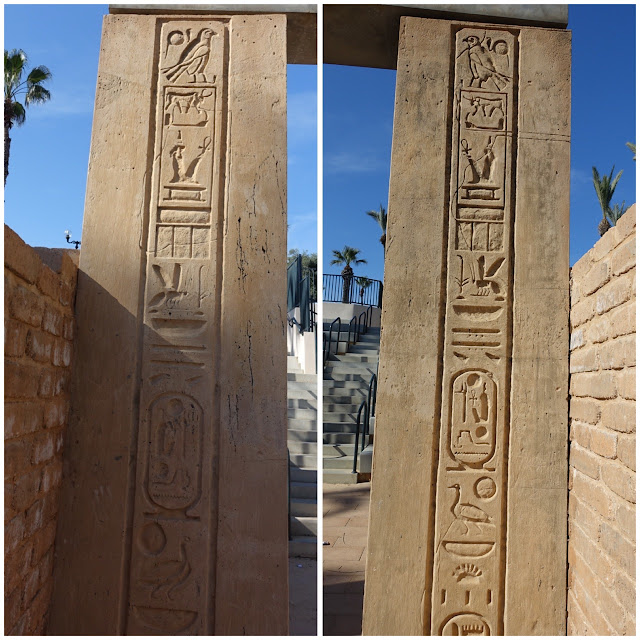 Jaffa oranges no longer exist here but artist Ran Morin created Orange Suspendu in 1993.  It’s  a full sized orange tree hung by wires and nourished with a drip system.  It represents the juxtaposition of man and nature.  Growing oranges  helped with the rebirth of Israel thanks to irrigation.  Unfortunately the oranges available now are from Brazil or Spain- 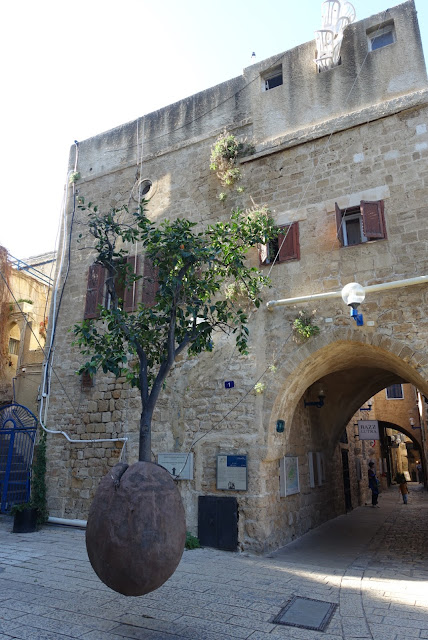 Walking home I passed through the flea market- 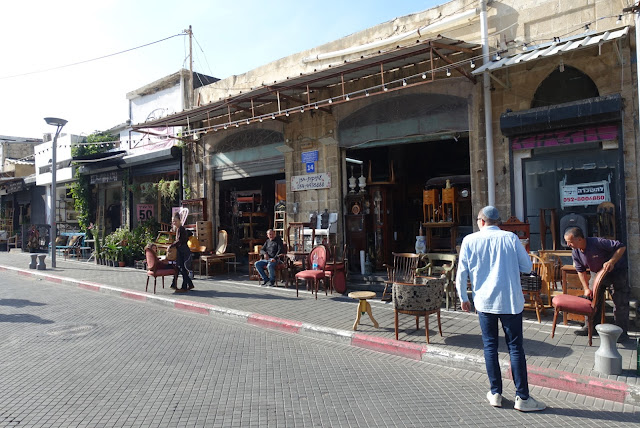 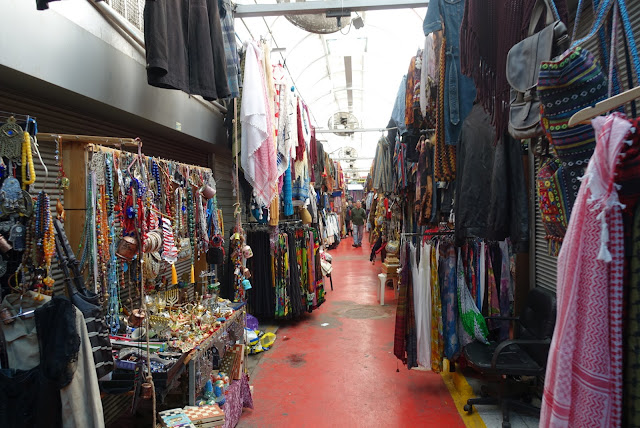 My graffiti tour has been canceled for tomorrow so I’ll do my own tour.  There’s a lot of great work around- 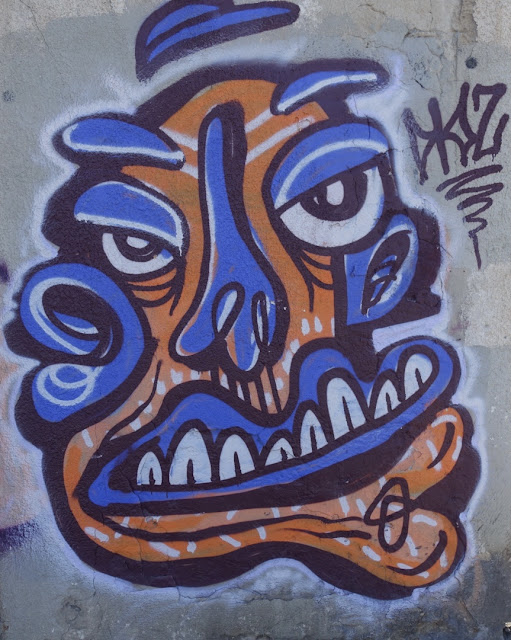 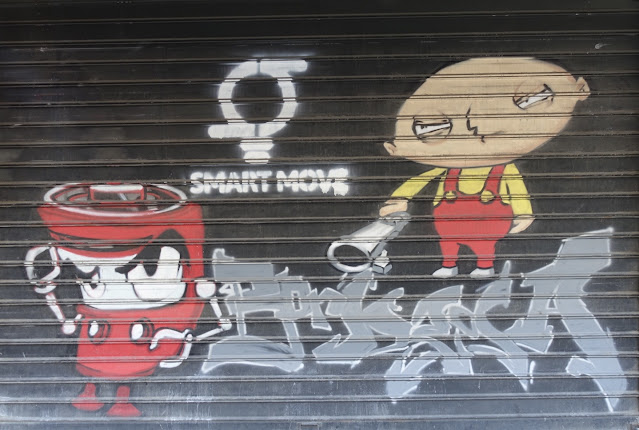 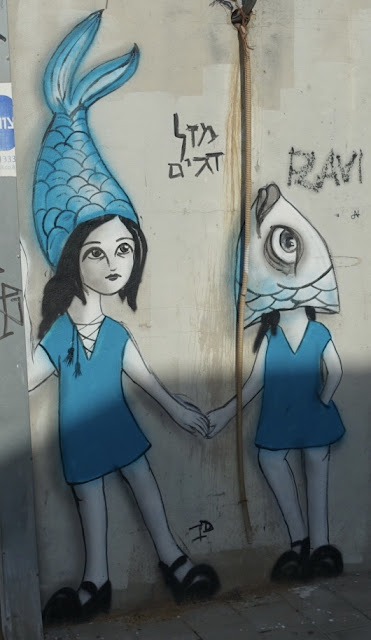 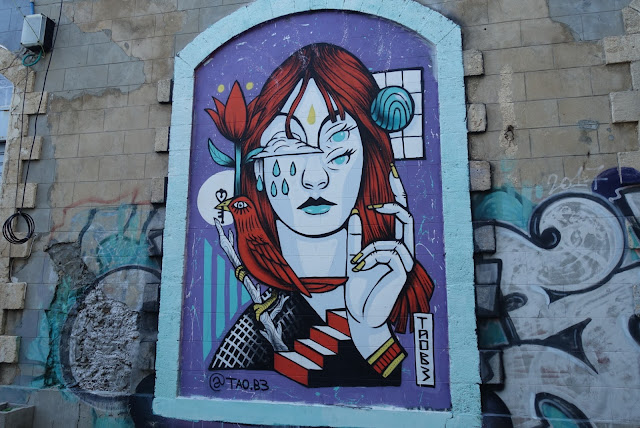 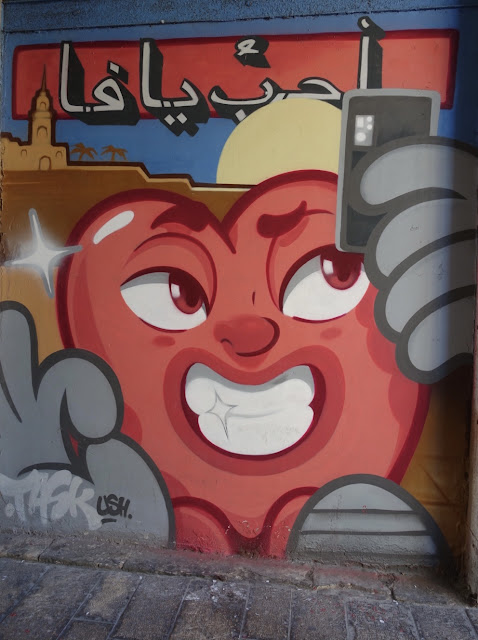 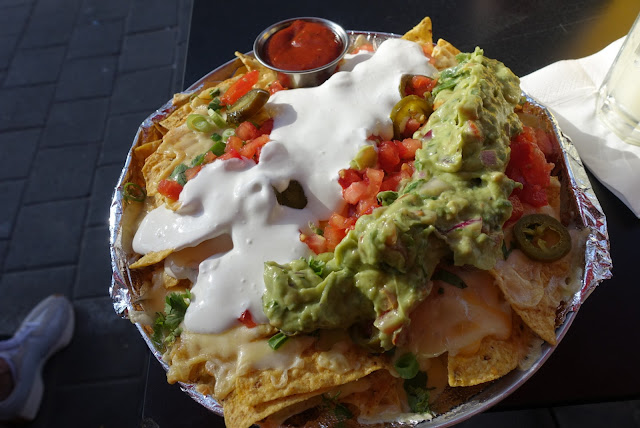 All four beds are now full in my room.  Evgeni from Saint Petersburg arrived at 4 this morning and Ryan from California got here at 5 this afternoon.  Paul snores but Evgeni doesn’t so hopefully Ryan doesn’t either.  Only 2 more nights in a group setting then I’ll be in hotels until I go home.  Southeast Asia is so cheap.  I learned today that Tel Aviv is the third most expensive city in the world after Singapore and New York.  I believe it!