I think I’m into it now.  I had another great day!

I was down at the river by 6 am - I could hear music and had also heard different ceremonies happened early in the morning.  Not sure what might have been going on haughty as it was a little hard to see- 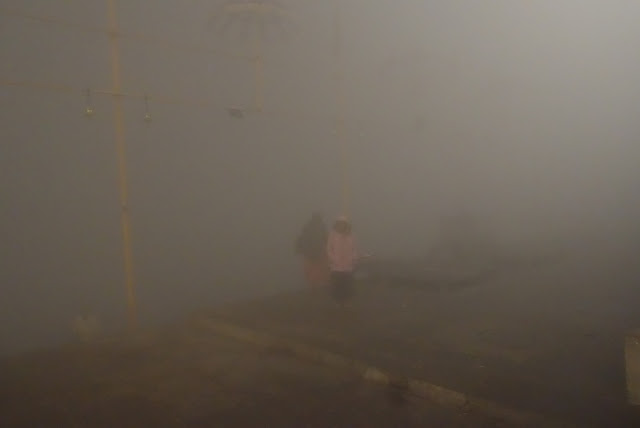 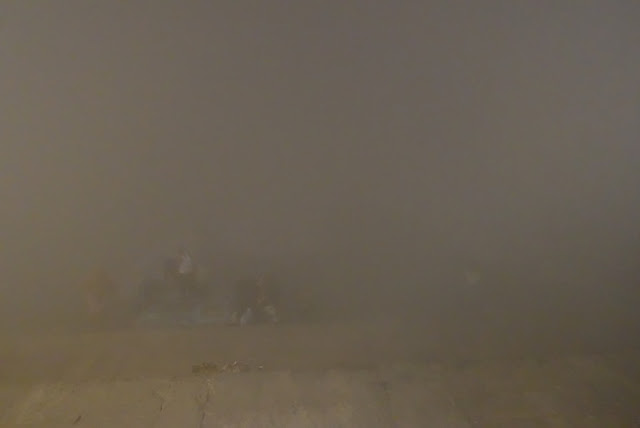 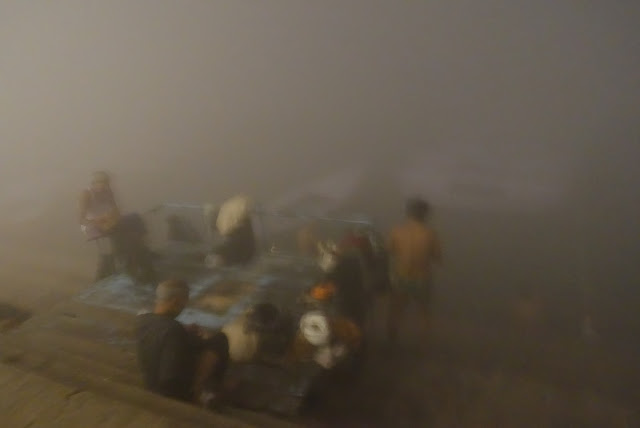 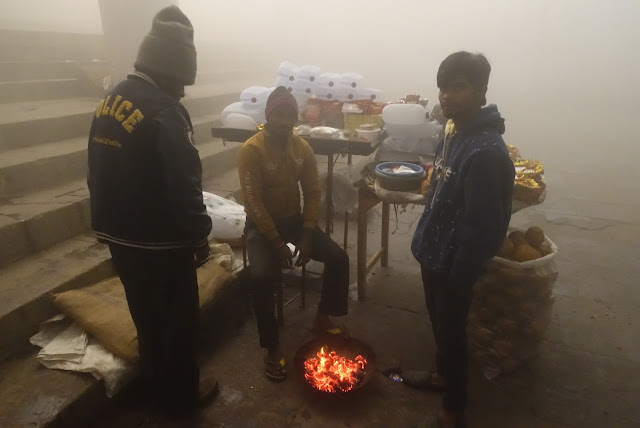 My hair was damp when I went back to bed!

I stayed in my room until the 11:00 checkout.  I booked my flight to Rishikesh and the rest of my lodging in India.  I’m glad I didn’t book any more buses because boarding this one, I learned that those who paid at the depot, (well, it’s not a depot, it’s a rubby gas station with a dozen buses parked around it) just pay the driver.  I paid 1300 rupees and they paid 800.  The website doesn’t need to make that much! 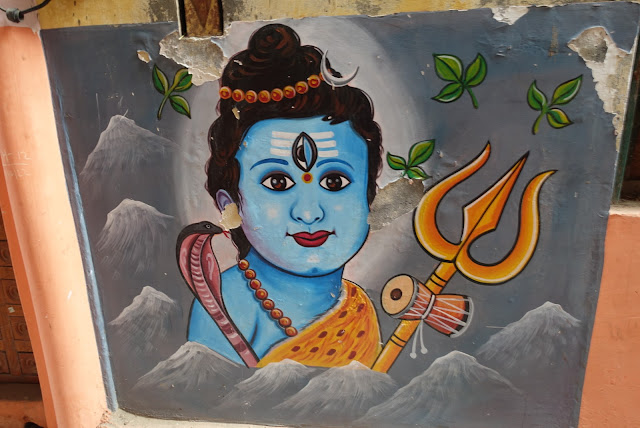 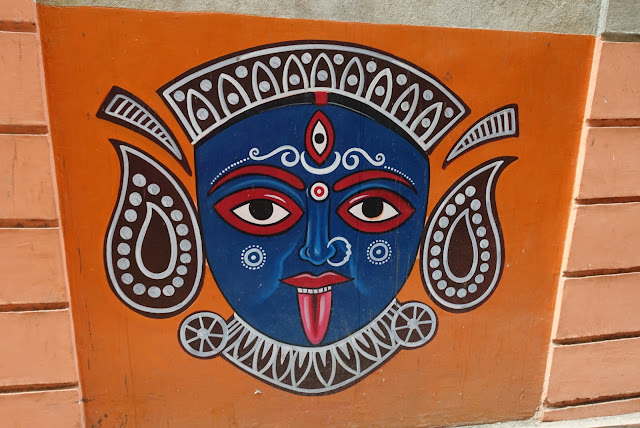 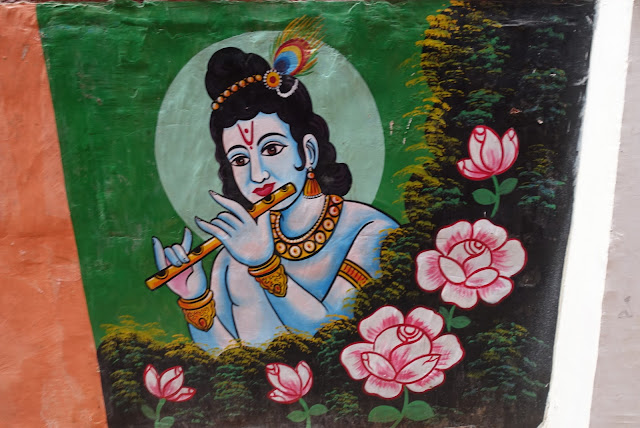 There are altars everywhere- 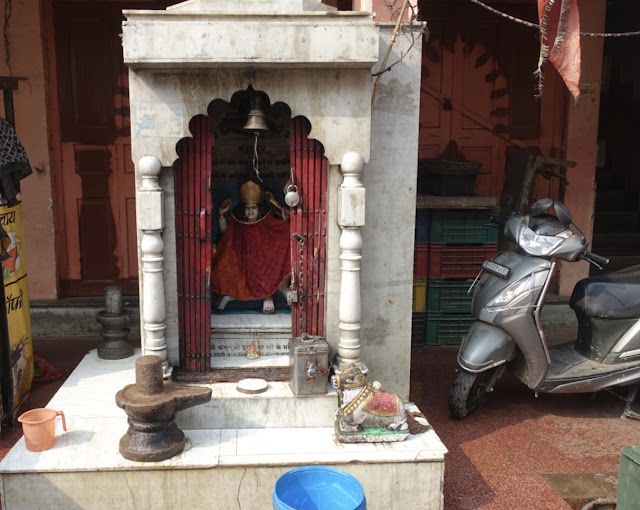 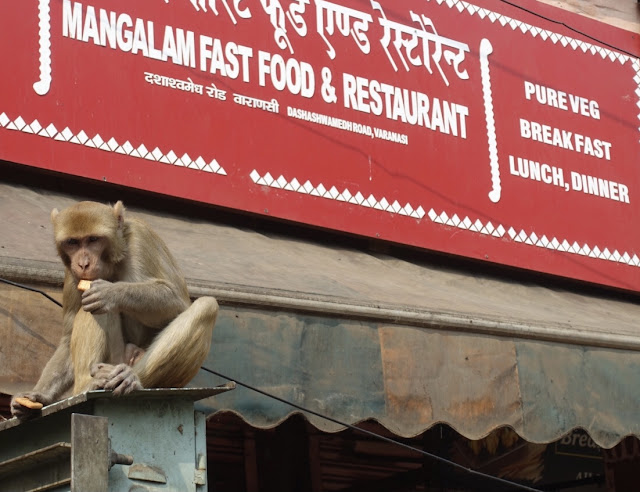 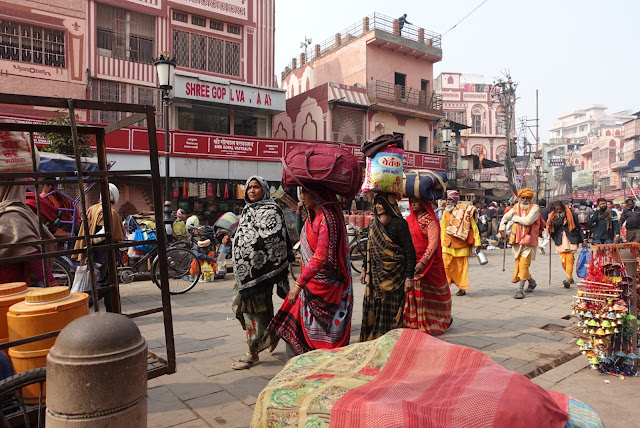 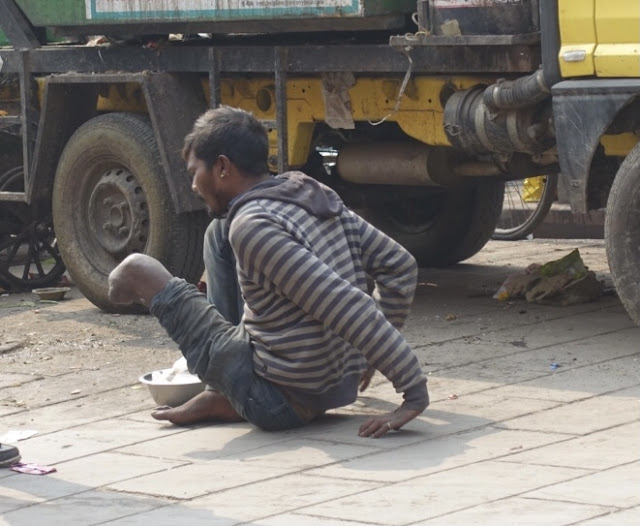 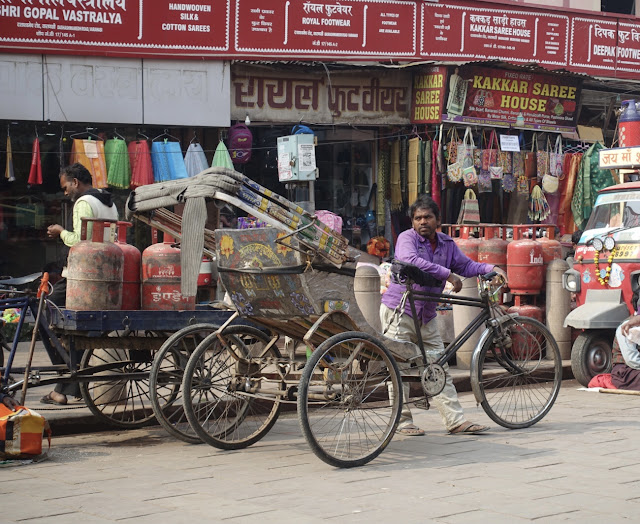 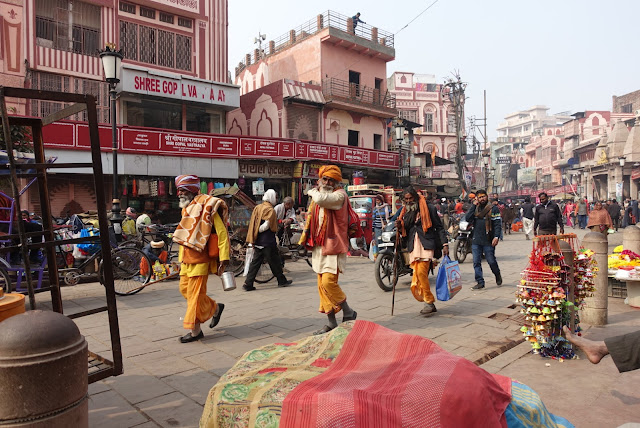 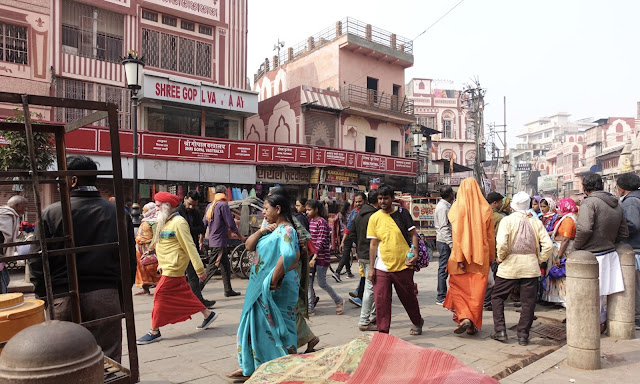 A procession of some kind went by with drums and singing- 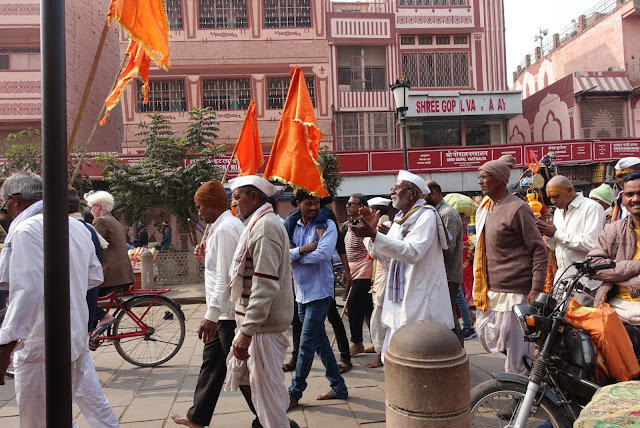 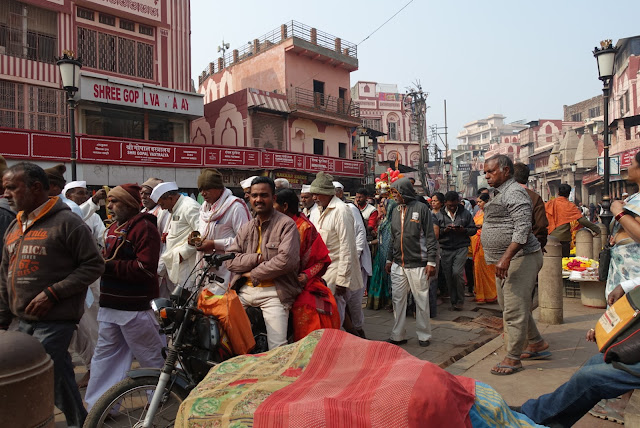 My “egg roll man” wasn’t at his booth,  apparently he only starts work at 6 pm so I went to a restaurant with a view- 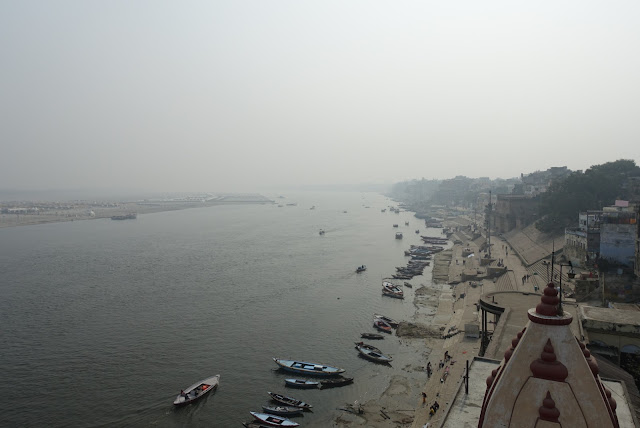 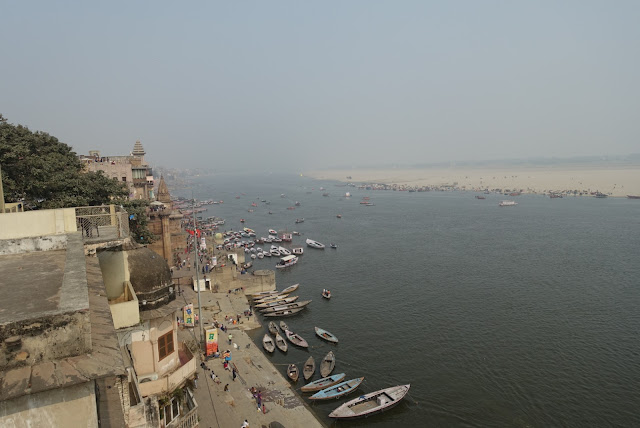 and had some mediocre dahl but a good sweet lassi.

At 4 pm, the assistant manager walked with me to find a tuktuk driver and we argued about price.  Grudgingly he agreed to what they told me at the hostel it should cost and away we went.  According to what I had marked on maps, he stopped too soon and told me to get out.  We were looking for this address-  Chandpur Morena G T Road, Near Sardar Petrol Pump!  WTF!  He pointed that it was around the corner.  Of course the locals got involved and said I was in the right place but that he should take me there!  He did and when I gave him the money, he was quite disgusted and snatched it out of my hand and took off.

I found my bus- 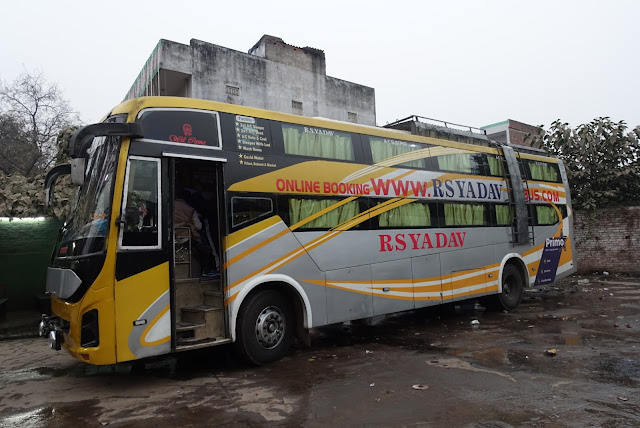 and waited.  I was plenty early- which was fine - no anxiety!  I’m going to get over that completely before this trip is over!  I met 2 young women from Norway and a 33 year old man from South Dakota who got stuck in India during Covid and is now engaged to an Indian and will stay here forever!  Hey Zeus Chris Toe!  Anyway…. 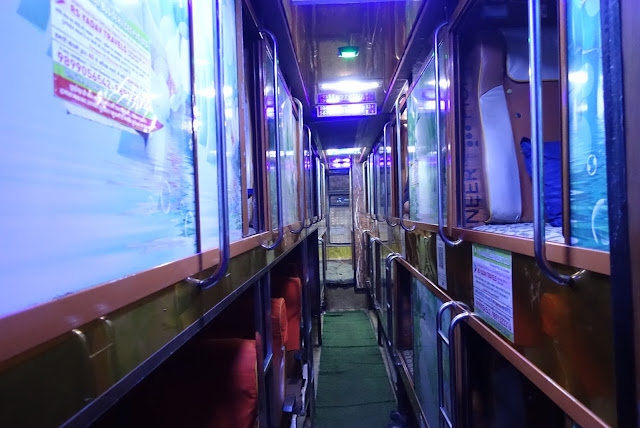 My “room” looking towards my feet- 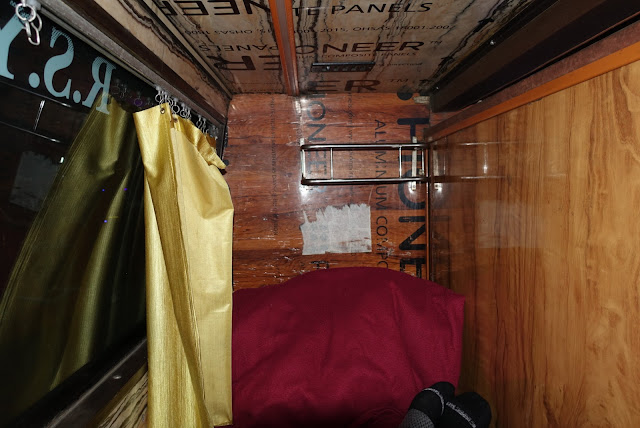 I have a big window, a light and plug in and a door slides on the aisle side to completely enclose me- 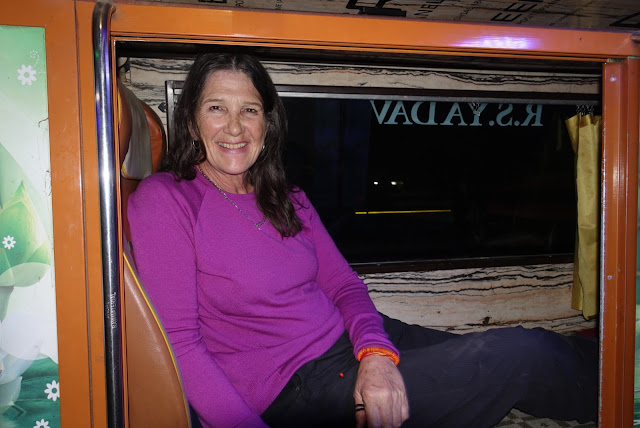 There’s a bathroom next to the driver with a urinal, small sink and squatting block toilet for we women.  There’s a 1000 rupee fine for doing anything more than urinating because it has no where to go.  Hope no one has to really go!

We were 15 minutes late leaving so that gets us to Agra around 5:15.  The Norwegians and I are are going to try and get off as we pass close to our hotels, probably an hour earlier.  We will see how that goes.

Not sure how much sleep I’m going to get but it’s going to be interesting!