I had another good day.  And, in spite of the bus and all it’s possible issues, I had a good sleep.  Two Norwegian girls and I were dropped off in the middle of nowhere on the highway but there was a tuktuk driver ready to take us to our hotels for $5 each and all things considered, we had no option.  I didn’t have a  booking for last night, the 20th, but was checked in by 5:30 for the 21st.  They’re obviously not busy!  I slept until 9 and had breakfast- this is an Indian omelette with bread - all fried together- 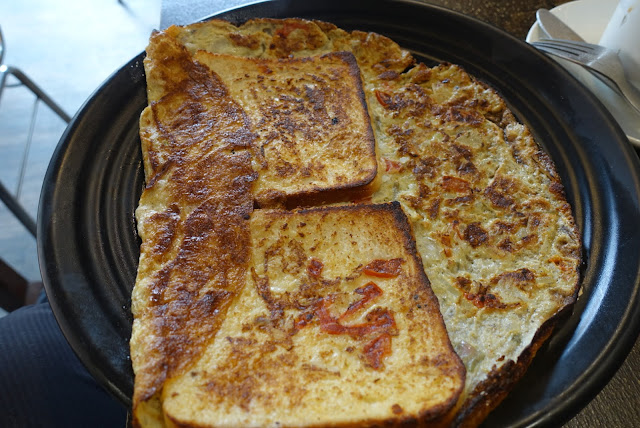 If only it worked- 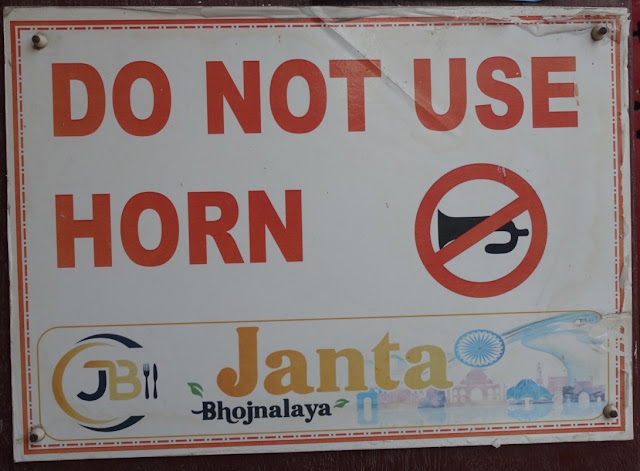 I went exploring and had an orange juice- 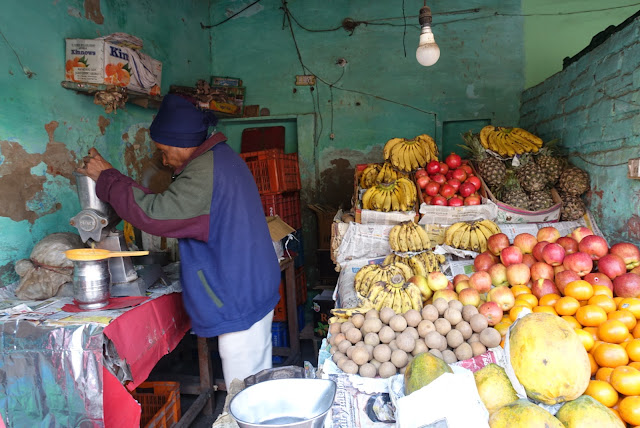 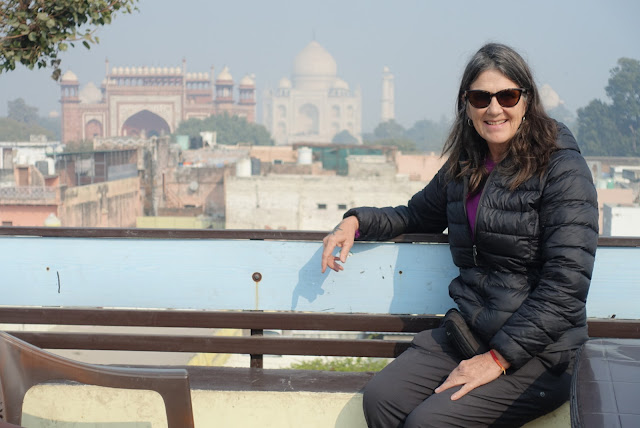 and offered beer and hash at 9:30 a.m.  I declined but do wonder about India’s drug laws.  According to the waiter there is no problem with small quantities but can you imagine an Indian prison?  Frick no!
I carried on.  That’s quite a load- 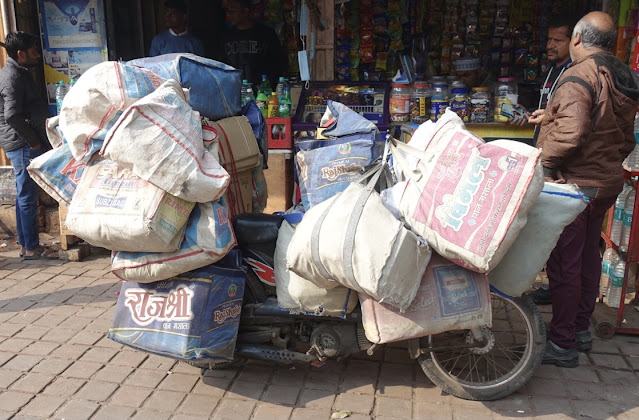 Basically there is nothing to do here but see the Taj Mahal. I walked around part of the complex and came to the Yamuna River- 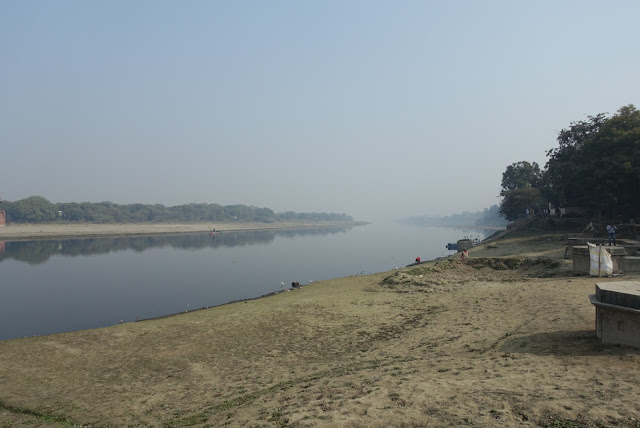 and the back of the Taj- 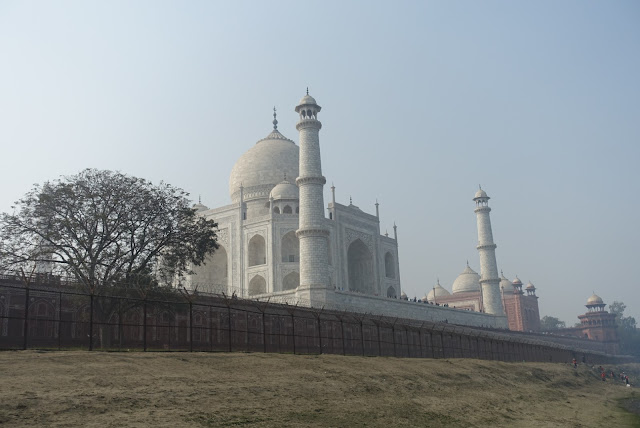 I decided I may as well visit today because it was sunny so I bought my ticket online and away I went.  First you walk through the main gate- 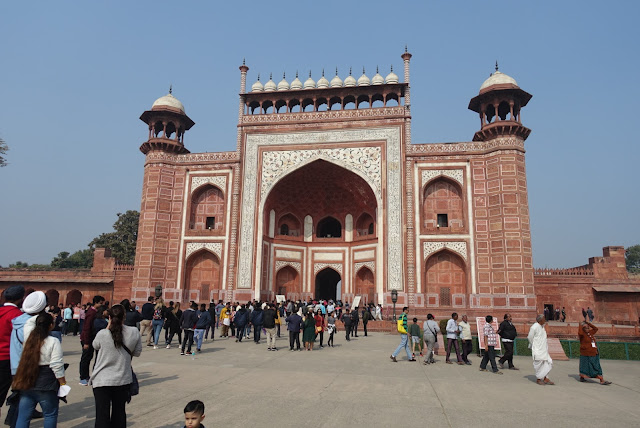 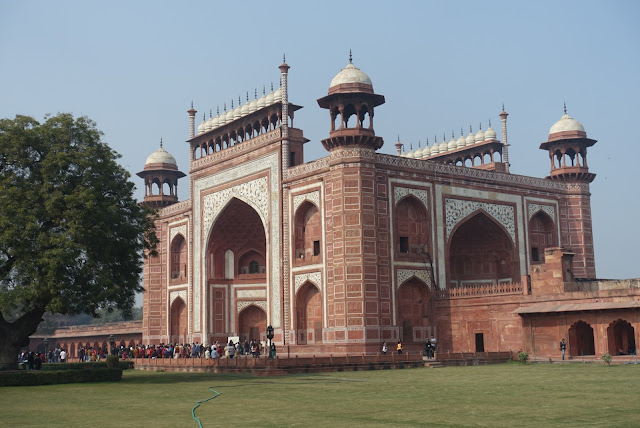 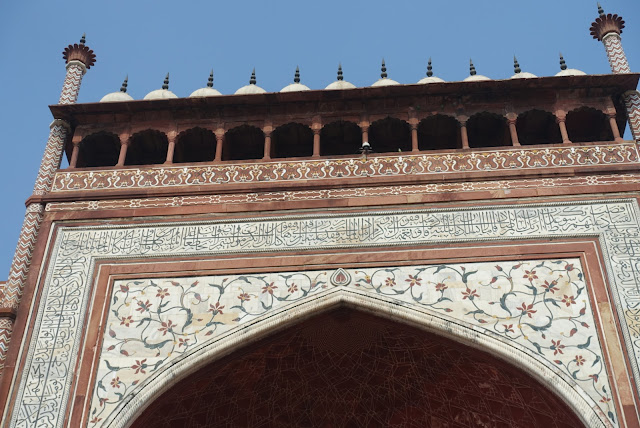 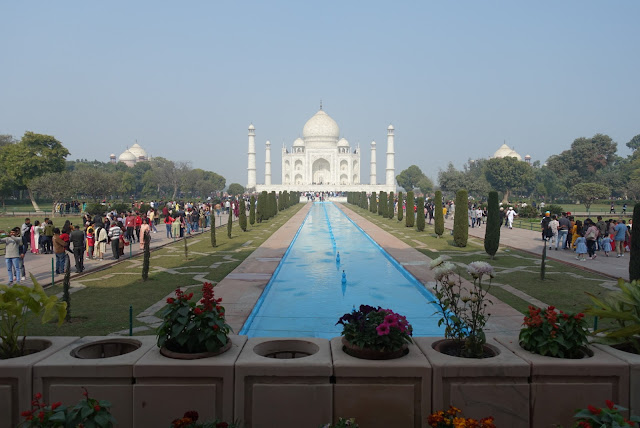 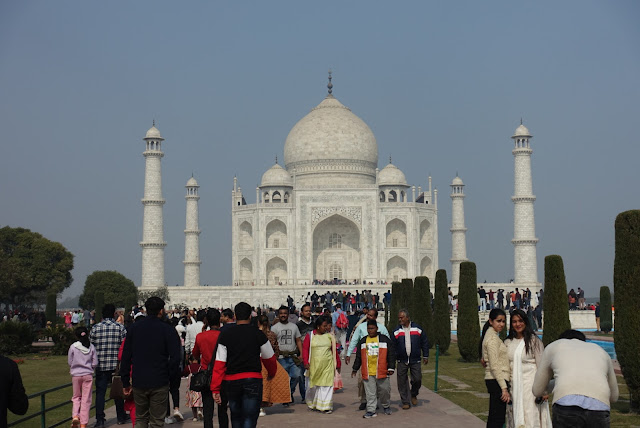 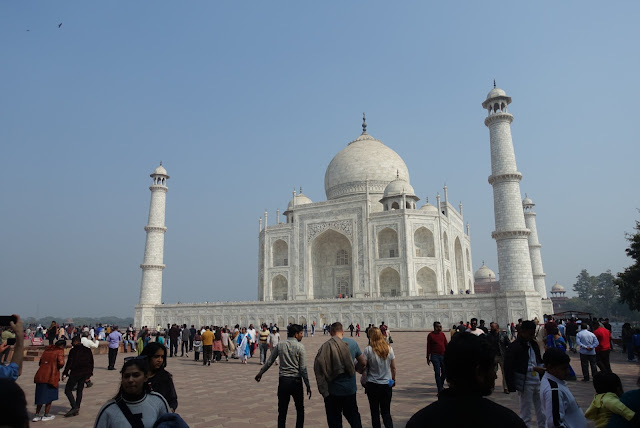 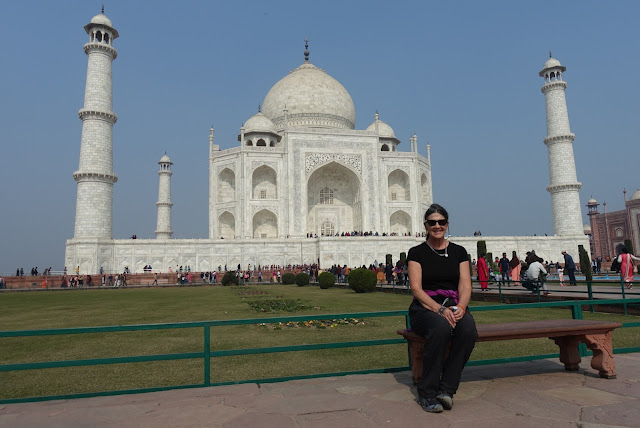 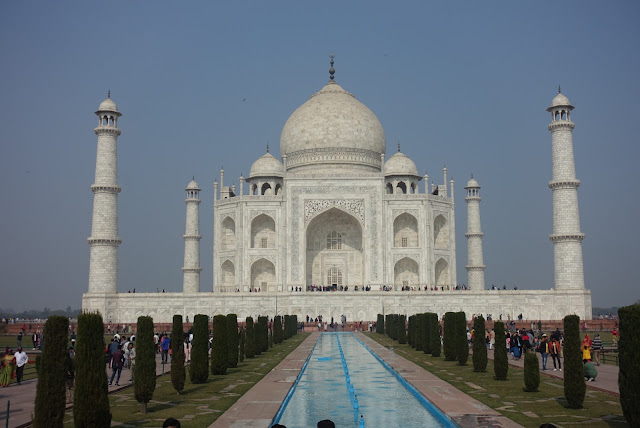 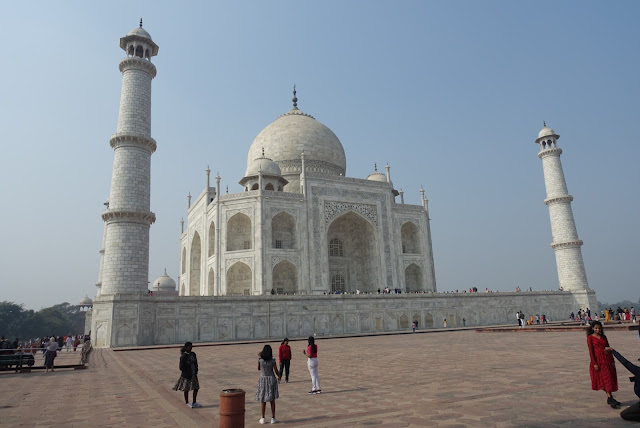 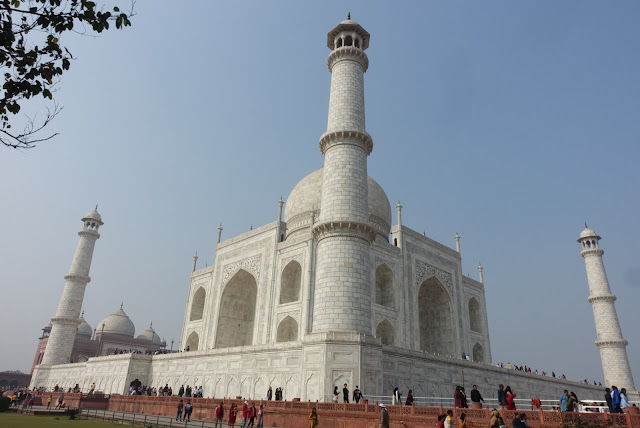 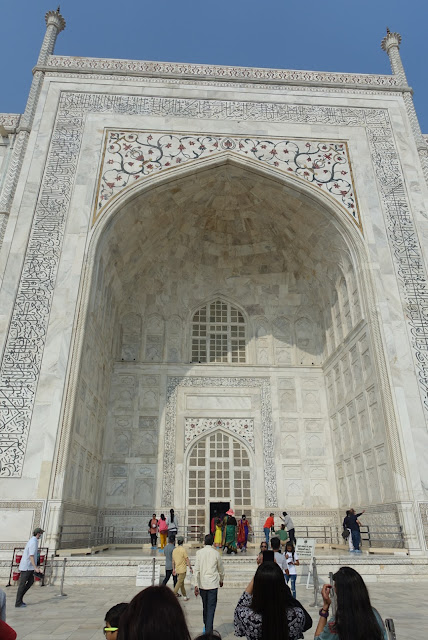 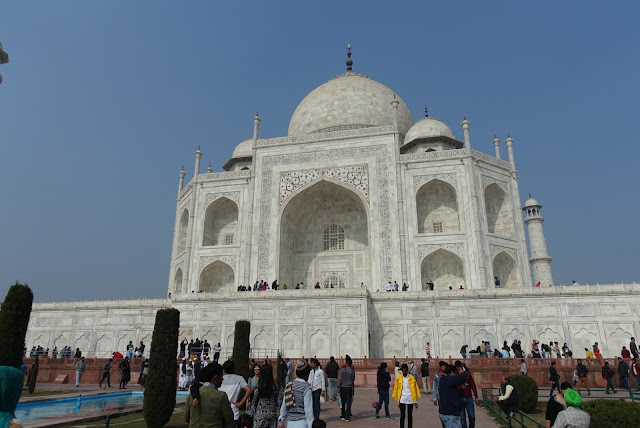 There are identical mosques on either side- 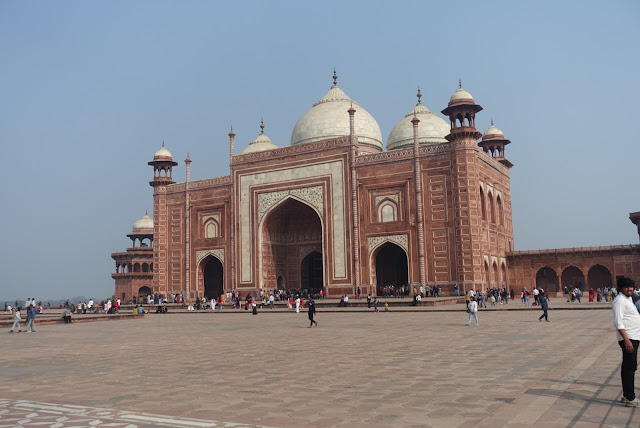 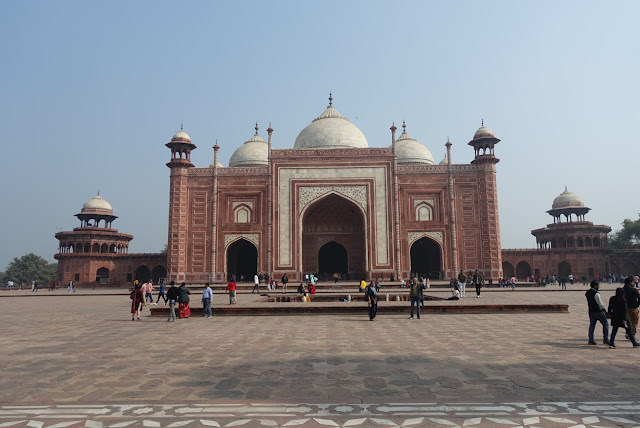 You need a separate ticket to visit the mausoleum but no pictures are allowed.  There, you walk around the two tombs which are hidden by a high, marble carved wall. Taj Mahal was built by the Mughal Emperor Shah Jahan to commemorate his “favourite” wife Empress Mumtaz Mahal.  He married her in 1612 and she died in 1631 at the birth of her 14th child.  Up until reading that, I was quite impressed with the love story of these two but 14th child?  Asshole! He  died in 1666 and is buried beside her.  It cost about 40 million rupees - $662,000 way back then and took 22,000 people 22 years to build.  I wonder what his other wives thought.
The marble is carved on the walls- 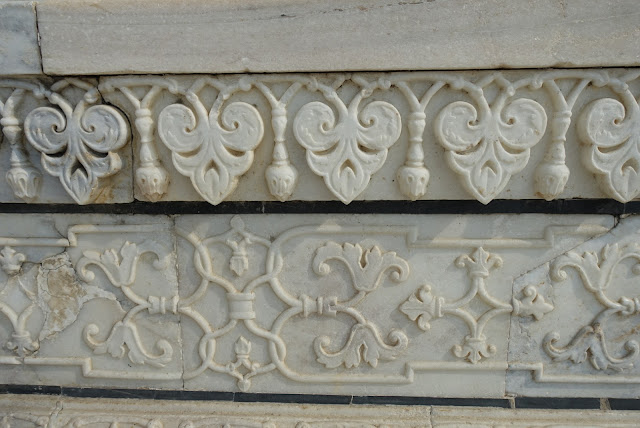 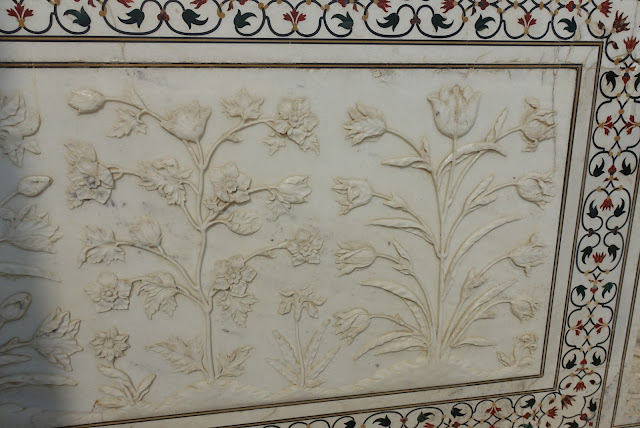 and there are mosaics- 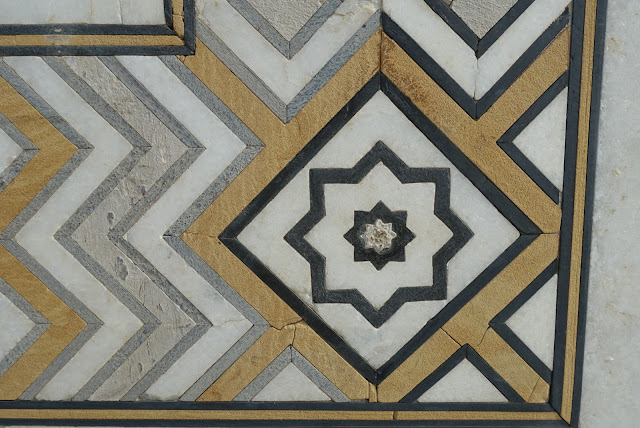 Indians are selfie crazy but I only had to pose once today.  These women looked nice in their sarees- 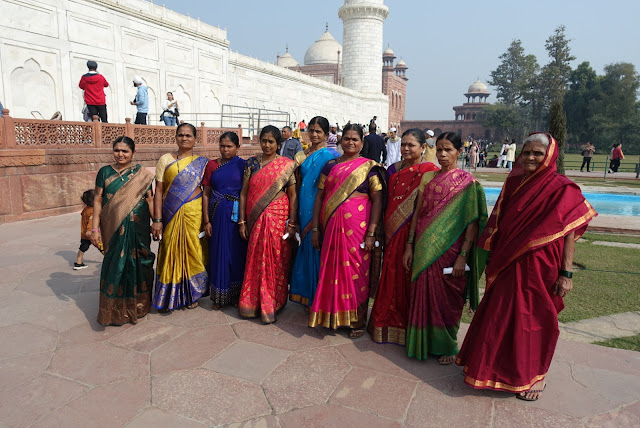 Looking from Taj back to the main gate- 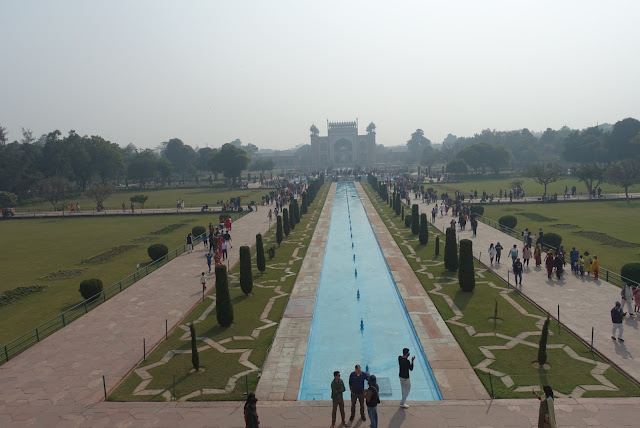 I enjoyed my visit.  Walking home I passed a very fancy on the street urinal.  There are always men taking a pee.  Not one for women though!  They really stink too- 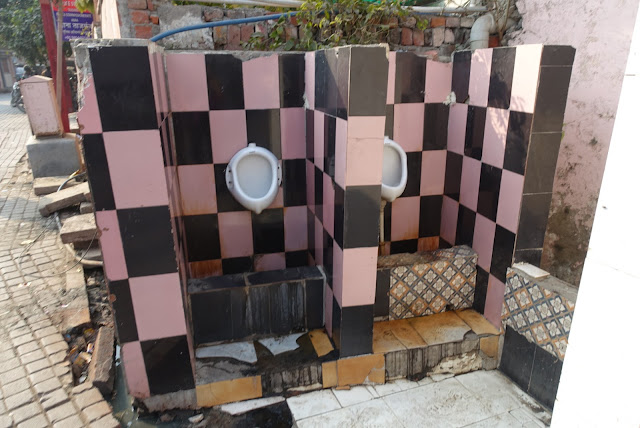 Tomorrow I’ll catch a bus or train around 3 pm for Jaipur but I may visit the Agra Fort in the morning.  Moving on!