Ignorant in Jerusalem and Epiphany, January 6, 2023 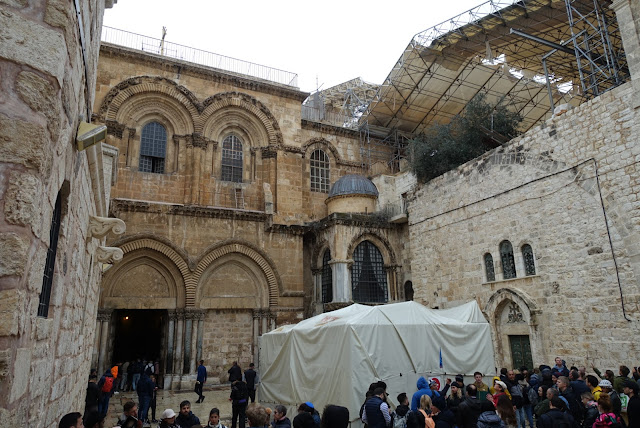 early to avoid the lines didn’t happen because I didn’t leave the hostel until 10!  That didn’t cause a problem though because the line was only about 20 minutes- 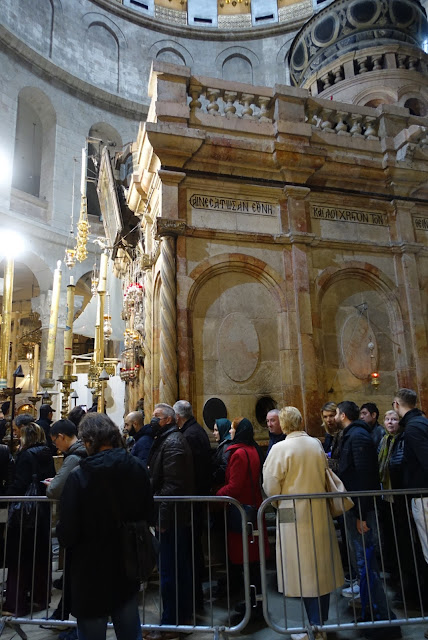 The entrance to the tomb is quite magnificent.  It’s a 19th century shrine called the Aedicule- 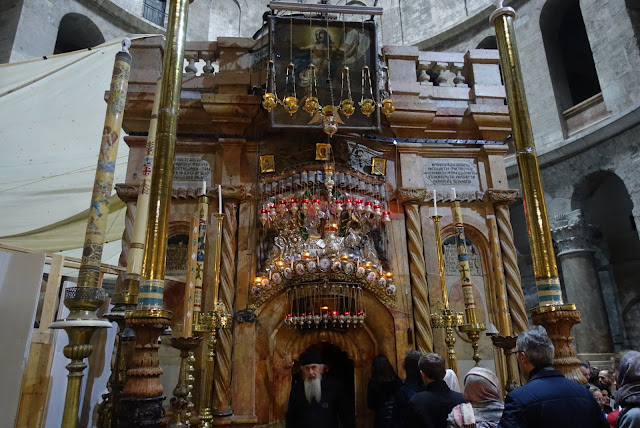 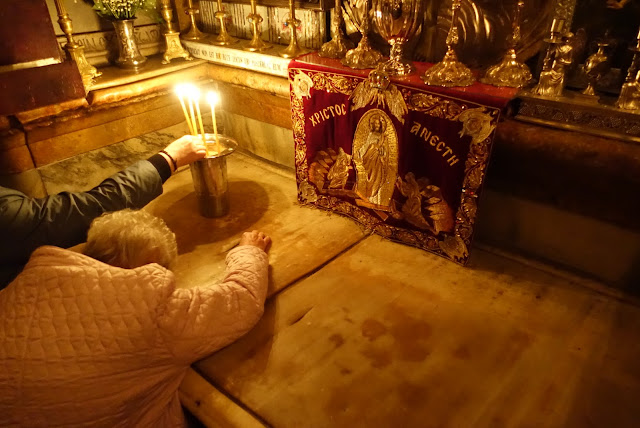 The other end of the tomb- 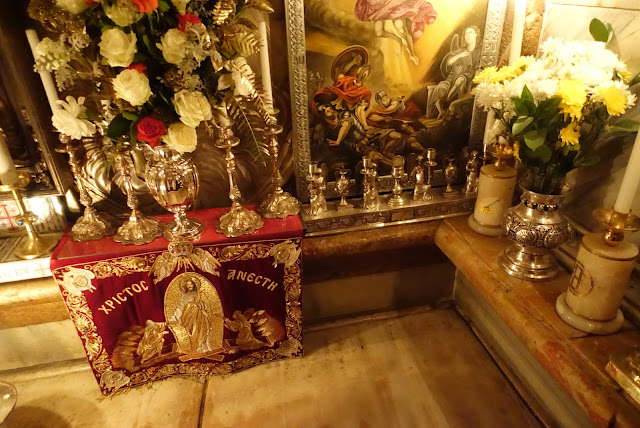 You don’t get much time in there; maybe a minute and then someone is chasing you out.  For the few minutes I could see the entrance, four or five people just walked in without waiting in line. Such thoughtful people, sort of missing the whole point. 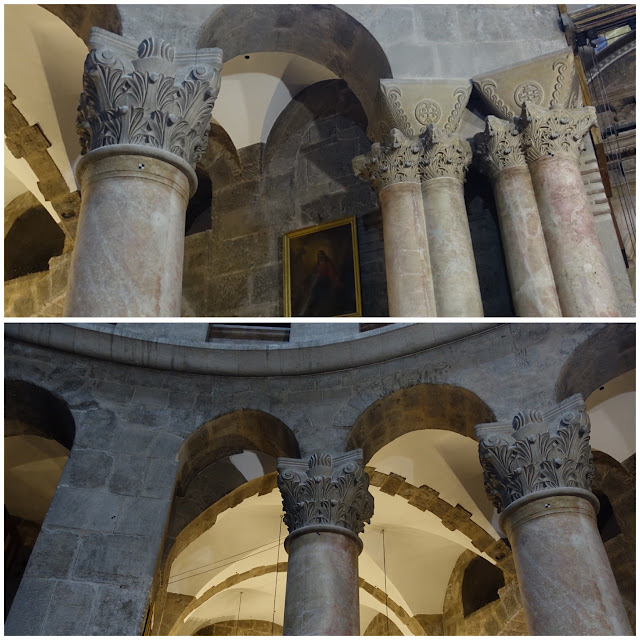 The Stone of the Anointing is where tradition says Jesus’ body was prepared for burial but the present stone was added in the 1810 reconstruction.  That doesn’t stop people from honouring it- 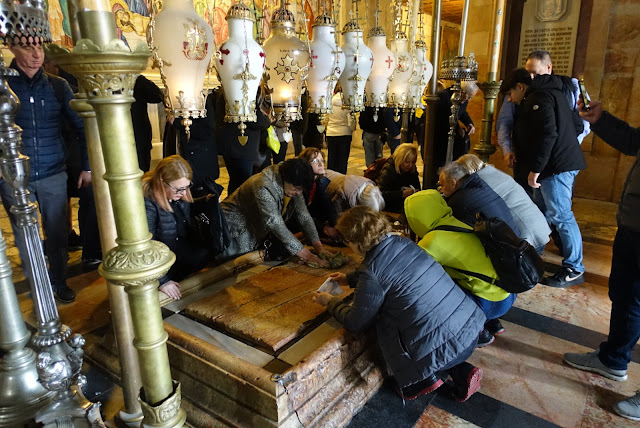 I bought a candle- 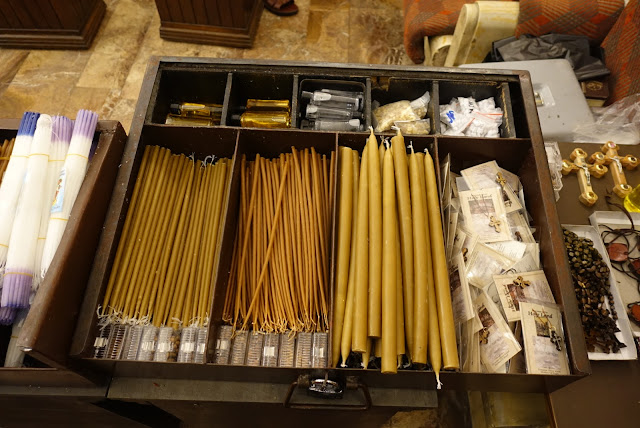 lit it, thought about Uncle Nico, prayed, cried a little, then left it burning- 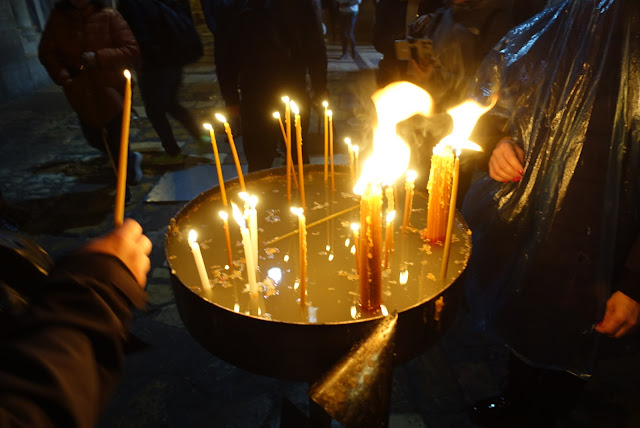 I wandered around and saw The Rock of Calvary which is where the Crucifixion is believed to have occurred.  The rock is on display on the main floor- 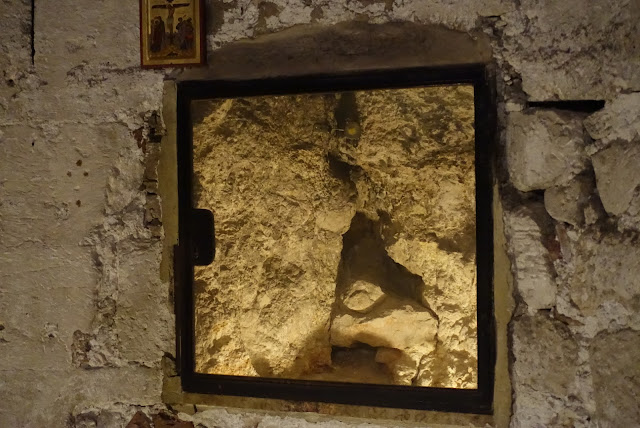 but it’s on the above floor where you kneel and pray at it.

The Ethiopian chapel is interesting.  How on earth they got a spot I’ll never know- 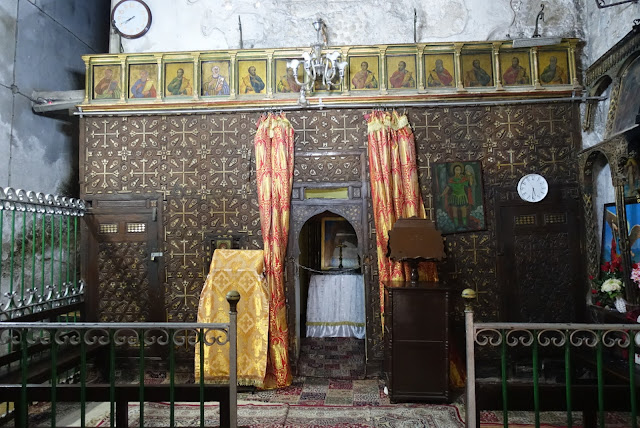 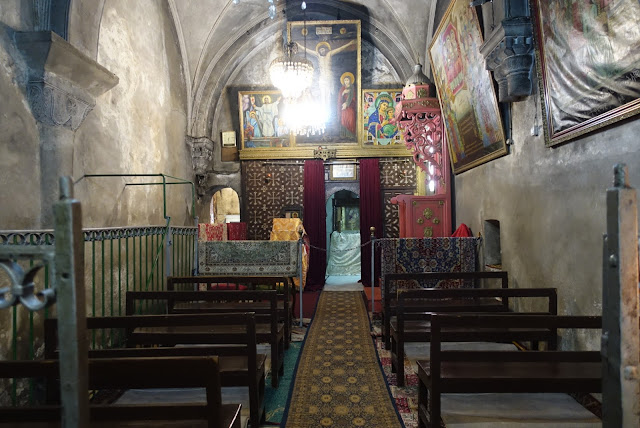 I was able to enter the Greek Orthodox Chapel- 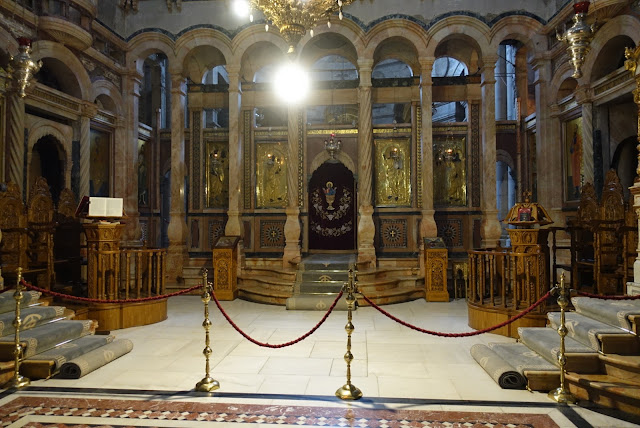 and see the Jerusalem throne and the Antioch throne.  Antioch is modern day Antakya, Turkey- 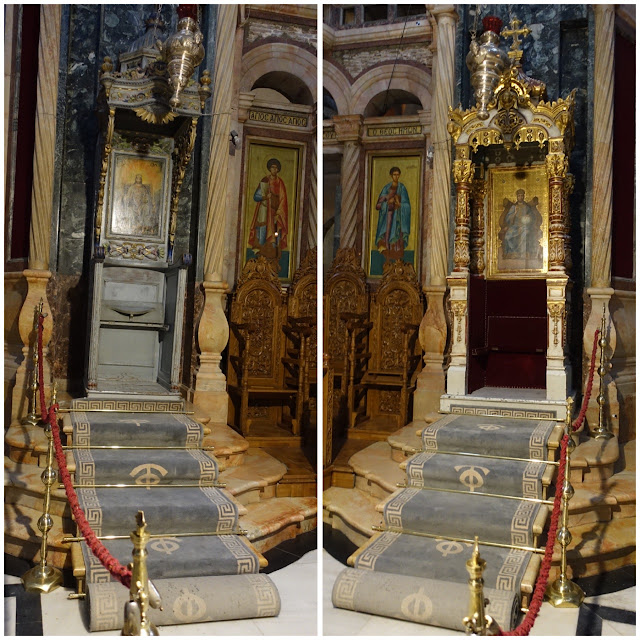 Yesterday during the tour, a service was happening in the Lutheran church as we walked by so I thought I’d stop in today only to find-

Somebody else missing the point.

My next stop was at The Garden Tomb which was discovered in 1867 and some think it’s the site of the burial and resurrection of Jesus and the tomb has been dated to the 8th -7th centuries B.C.  They did reuse tombs but the Bible says Jesus was buried in a new tomb (Matthew 27:57-60 and John 19:41).  The trough and cistern date from the time of the Crusaders which was in the 12th -13th centuries.  They don’t claim to be “the” place but they’re still open! 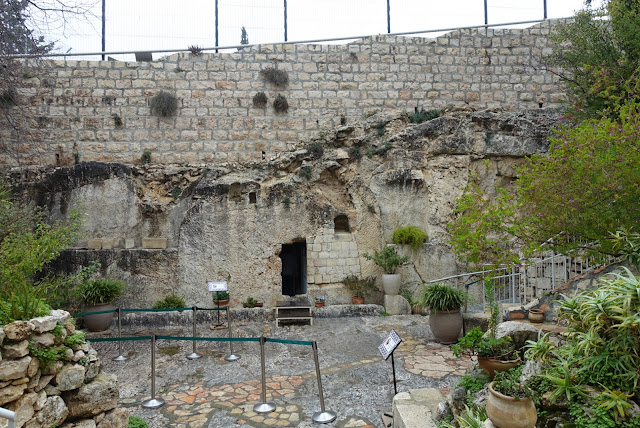 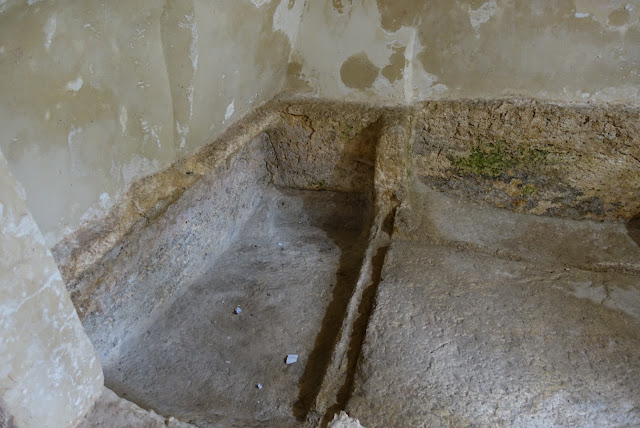 There are Bible verses scattered all over the garden-

The area outside is a nice and peaceful garden- 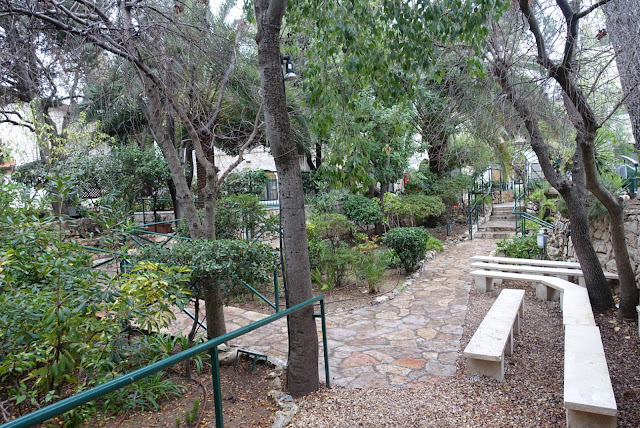 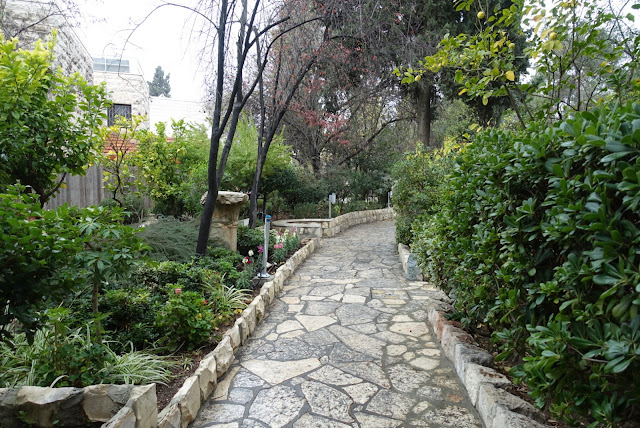 with lots of sitting areas- 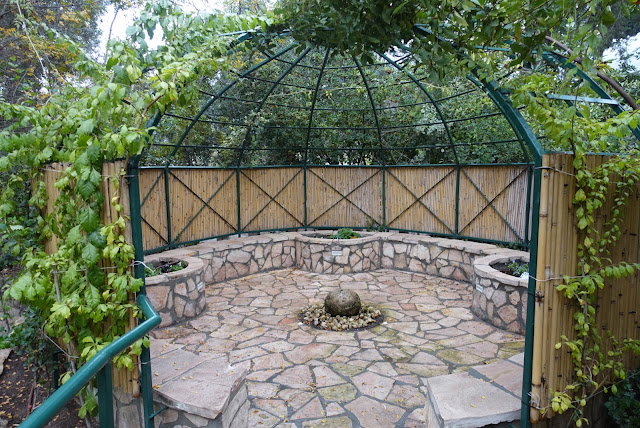 and a wine press- 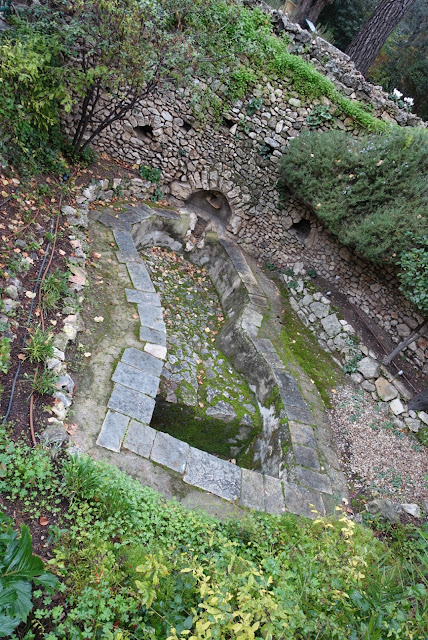 There’s also Skull Rock which is mentioned in the Bible, Luke 23:33 “And when they came to the place that is called The Skull, there they crucified him, and the criminals, one on his right and one on his left”- 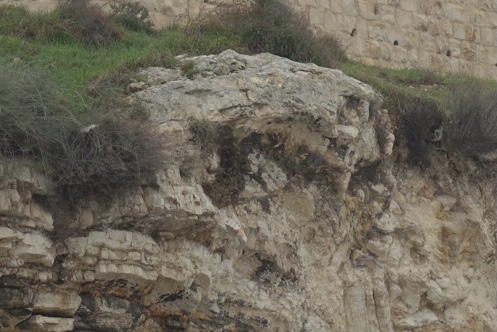 From here I walked to the Rockefeller Archaeological Museum but it was closed!  One can check the internet for information like opening hours but more than half the time that information isn’t accurate.  So that was the first blip to my day.

I walked home through the Old City.  Call to prayer had just finished and what a never ending crowd!  I walked into it for at least 10 minutes- 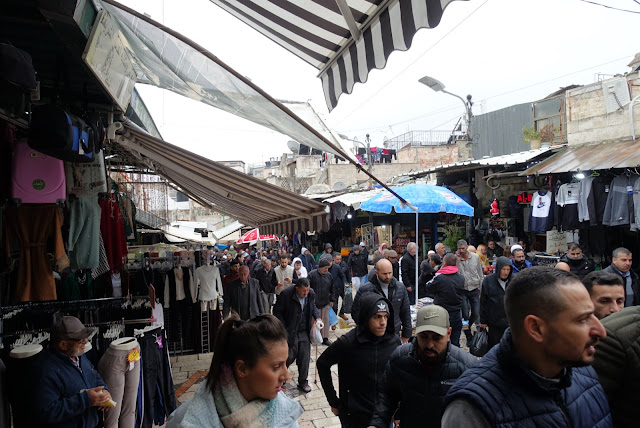 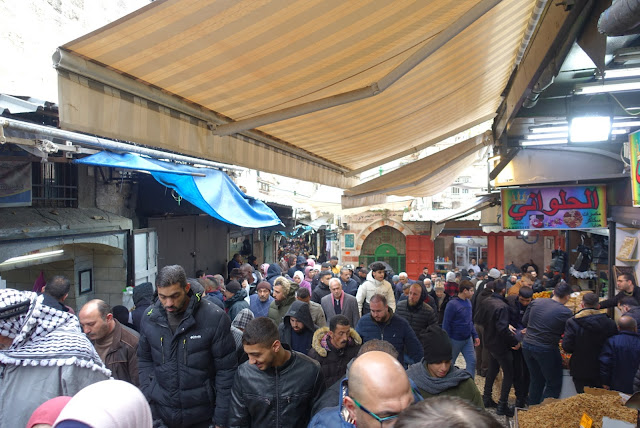 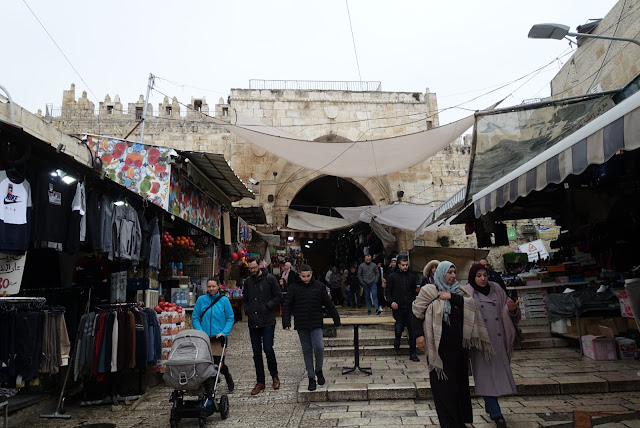 To close their shops to attend, they just throw a stick across the entrance and cover the goods- 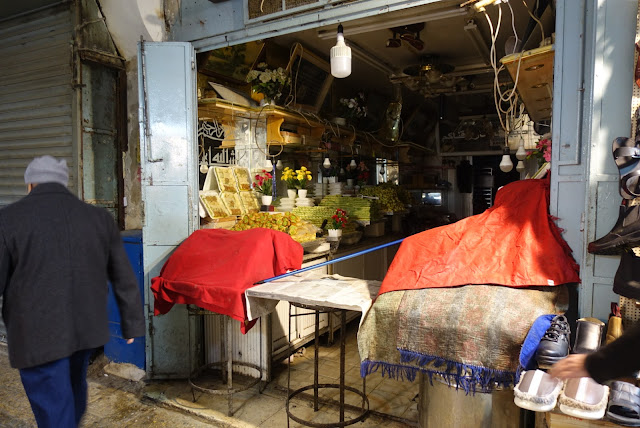 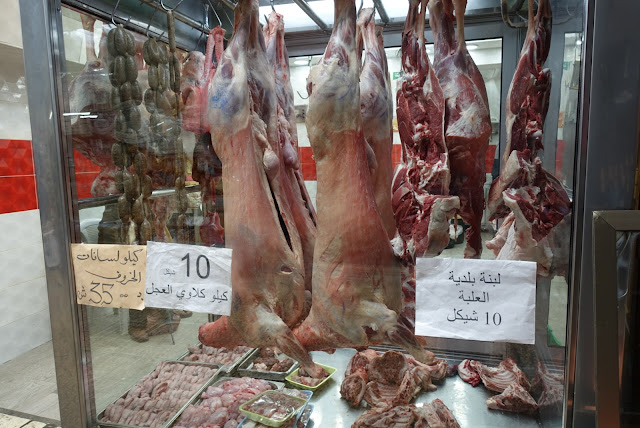 I went to the lounge once back at the hostel and visited with Oli, a New York Jew who has lived here more than 20 years.  I asked him for help with the Moovit app to make sure I knew how to get to Nazareth tomorrow via bus. Lots of the site is in Hebrew and I cannot see a place to change it to English. He looked and couldn’t see one either and then informed me that starting in about 10 minutes  (it was 2:50), everything would be closing and wouldn’t open until after Shabbat tomorrow which is around 6 PM. So, no restaurants, no shops of any kind and no PUBLIC TRANSPORTATION!!  So, I rushed out and found my shawarma place was already closed!  I walked to another street and met lots of what looks like American school groups walking with bags of food.  I found a very busy market and bought an assortment of delicious meat filled items- 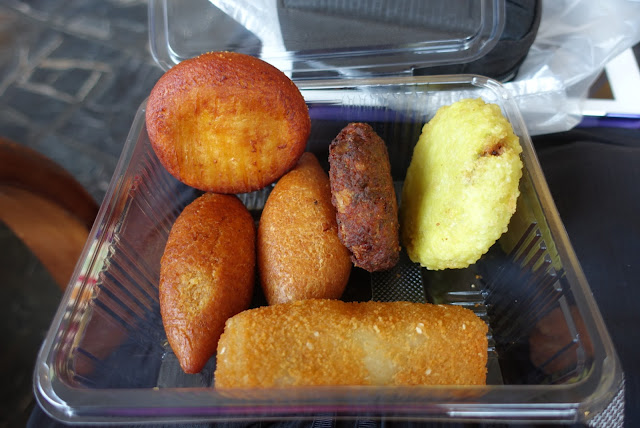 I’ll have plenty of time to visit the Rockefeller tomorrow!