My sleep was OK in spite of the fact Paul from Germany snored super loud. He got in late so I don’t know if he had been drinking but at one point it sounded like he swallowed his tongue. I hoped he choked to death because at least the noise would stop, but no luck!  It started again before I could fall asleep.  Right after breakfast I decided I might as well get going even though my flight was at 1:40. I have such anxiety about airports but I noticed that by getting there early I had none at all so that is my new plan. I would rather sit in front of the gate for a couple of hours than arrive just in time.

My anxiety might have something to do with the fact that I have missed a flight or maybe even more than one. A couple winters ago I was flying Guadalajara to Puerto Vallarta to meet Jane, Nico and Andi. I had left my Air BNB very early and had checked the day before at the bus depot to make sure I knew where the bus would stop. I stood on the sidewalk, waited, waited and waited some more.  A few buses stopped but when I said where I was going the driver shook his head and drove away. Eventually one came but he had to be the slowest driver on the planet. He talked to everybody who got on and he dawdled. Guadalajara airport is off the highway and the buses don’t go in so you have to walk,  probably half a mile at least. By the time I got off the bus I could wave at my plane overhead.  Luckily there was another flight later that day so I could still be in PV before Jane but of course it cost more money, a lot more!  I can’t even say live and learn because I left with plenty of time but a simple call to Uber and I would not have had a problem.

But today, talk about stunned. Once at the Tel Aviv airport I found the screen where they list the flights. I sat there for probably 40 minutes and finally realized that I was staring at the arrivals board. Eventually I found the check-in kiosks, got rid of my luggage which weighed exactly 13 kg, went through security, passport control and sat in front of my gate with at least an hour to spare. I had NO anxiety at all.

The flight to Abu Dhabi was fine. I sat beside a former mechanical engineer professor who gave me some tips as to which cities I should visit in the next 18 days. He now sells ceramic tile. He quit being a professor because there aren’t as many students studying engineering. I found that rather frightening.

I had a beer in the Abu Dhabi airport that only cost $9. That’s ok after Tel Aviv prices!

The Abu Dhabi to Delhi flight was fine too. I watched some episodes of Yellowstone from last season.

As soon as I got off the plane I could smell it. The air is smoggy or foggy or smoky but it smells like burnt garbage. I hope it clears off of it or at least I don’t smell it every time I breathe. I can’t imagine living in that all the time.

As soon as I got off the plane I could smell it. The air is smoggy or foggy or smoky but it smells like burnt garbage. I hope it clears off a bit or at least I don’t smell it every time I breathe. I can’t imagine living in that all the time.

Customs and luggage pick up was simple. A short taxi driver, they all seem pretty short here, was holding a sign with my name spelled incorrectly, waiting for me at the airport. I waited while he got the car- 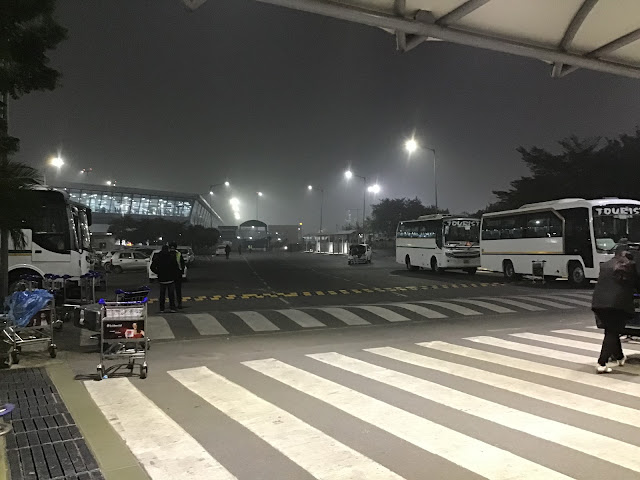 When I asked him how long it would take to get to the hotel he said I drive 50, one hour, I drive fast - 30 minutes and away we went. I wish I could mimic his accent because it was so funny and just the way he put his words together. He drove like a maniac, turning and passing others but soon I was in my hotel room. It was 5 AM and I was exhausted. My room is right at the lobby which is very noisy so I’ll move upstairs in the morning. I’m looking forward to see what’s “ out there” in the morning, or probably the afternoon.

I’ve booked my flight home. I’ll arrive in Saskatoon at 5:09 pm March 31. It’s a week or so earlier than I originally thought but that’s okay.