Ukraine is beautiful in the fall- 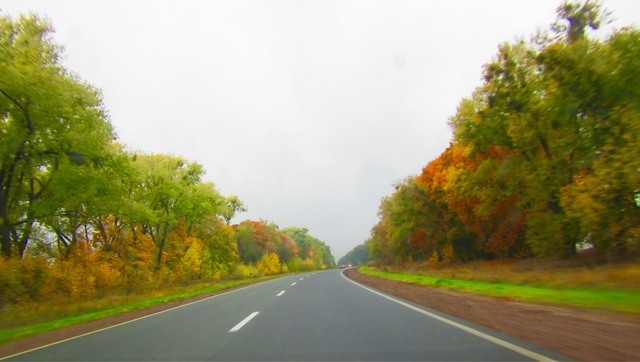 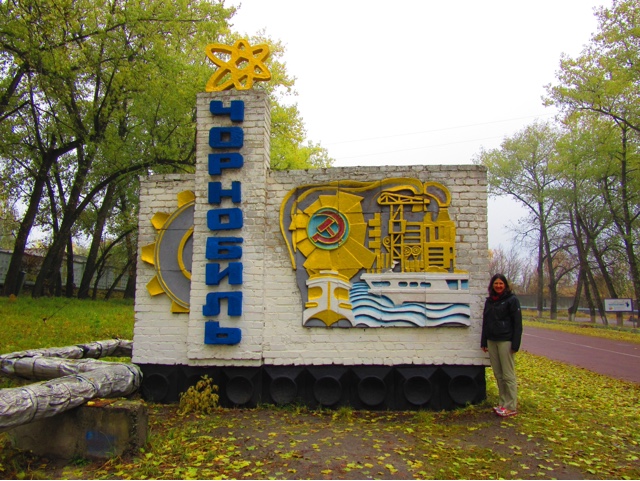 The Chernobyl Exclusion Zone covers 2600 square kilometers.  Radioactivity is present in both Ukraine and Belarus.  188 abandoned villages are represented in this park- 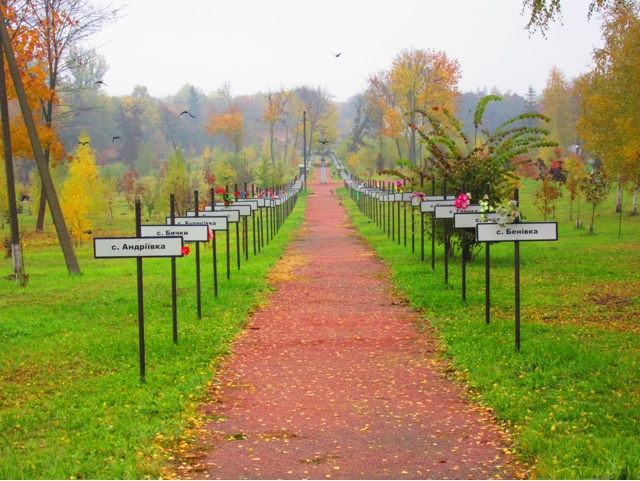 Construction continues on this storage facility for spent nuclear rods even though the last nuclear reactor (#3) in this area was shut down Dec.16, 2000.  G7 countries asked Ukraine to shut it down and gave them money to build safer plants.  Today, Ukraine has 4 operating nuclear power plants- 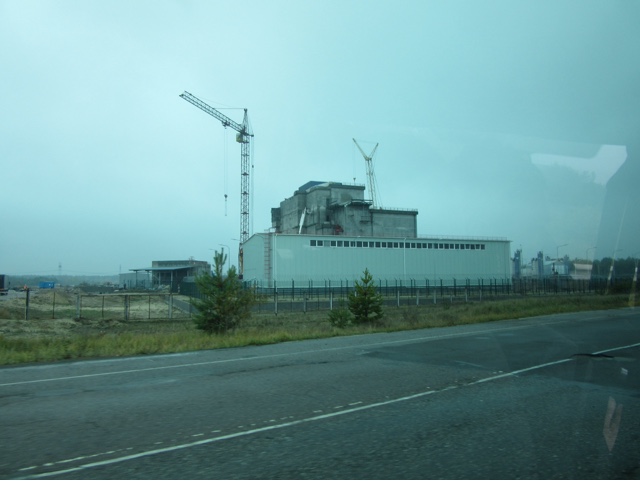 Reactor #5 was 85% ready to operate when Reactor #4 exploded so it was never finished or opened.  Cranes have been sitting idle for 29 years.  It was supposed to open November 7, 1986 (Day of the Revolution) but it never happened-

Today, Prometheus stands in front of Reactor #4 remembering the 31 workers who died within the first 3 months after the explosion April 26, 1986- 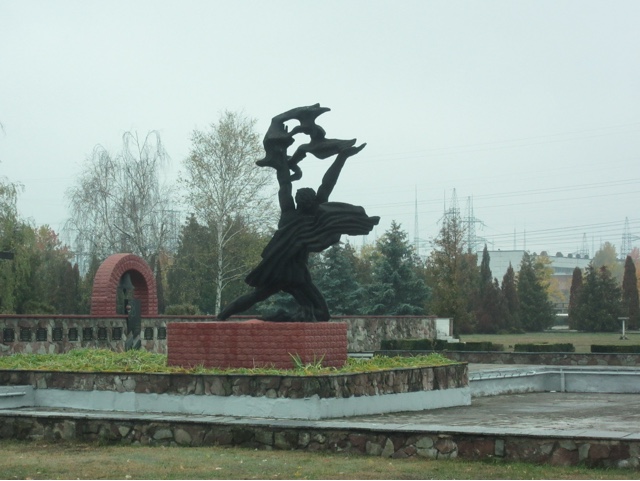 This new safe confinement building (sarcophagus) will be shifted over onto Reactor #4 in 2017.  It's made of thin metal sheets and will protect the mess- 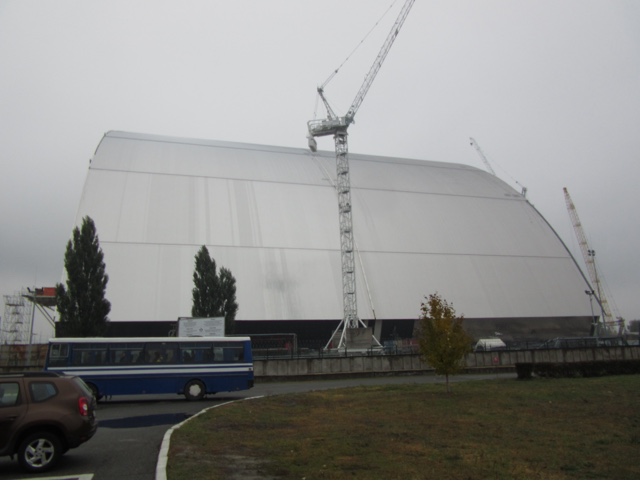 A geiger meter reads the level of radioactivity in micro severt/hour.  While I'm sitting in the van, it reads 0.09 but there were a few "hot spots" along the way- 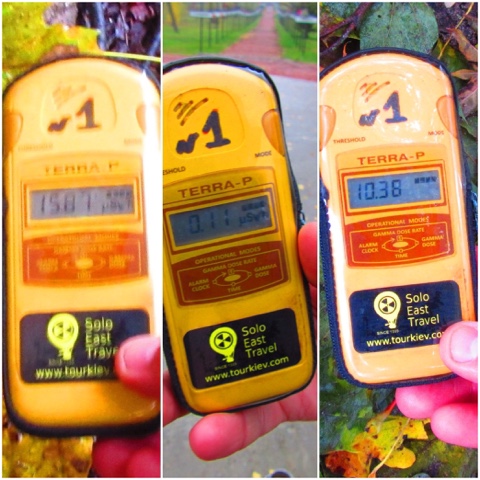 The Russian Woodpecker is a Duga 3 system, which was part of the Soviet ABM early warning network to intercept missiles coming in to bomb the nuclear power plants- 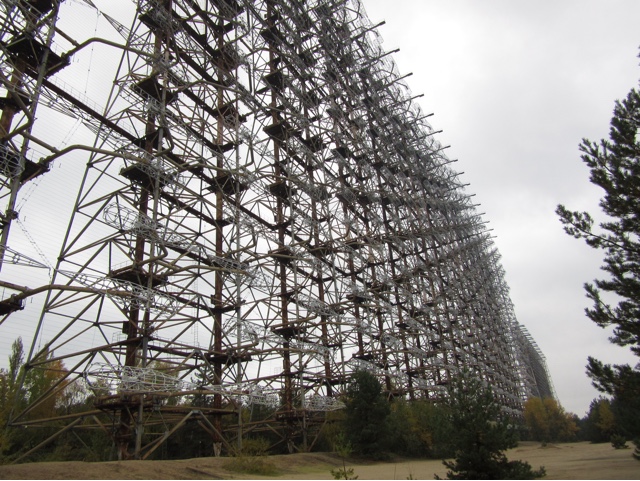 It took a couple of days for the USSR to admit there had been an explosion.  It wasn't until Sweden noticed increased radiation levels that the world learned the news.  Then, towns and villages were quickly evacuated.  People left with just the clothes on their backs and what they could carry.  Naturally, over the past 29 years, there has been a lot of vandalism.
The kindergarten in the village of Kopachi is a mess- 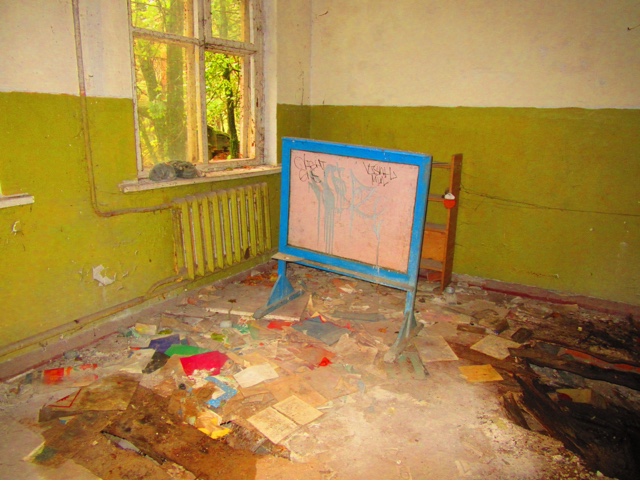 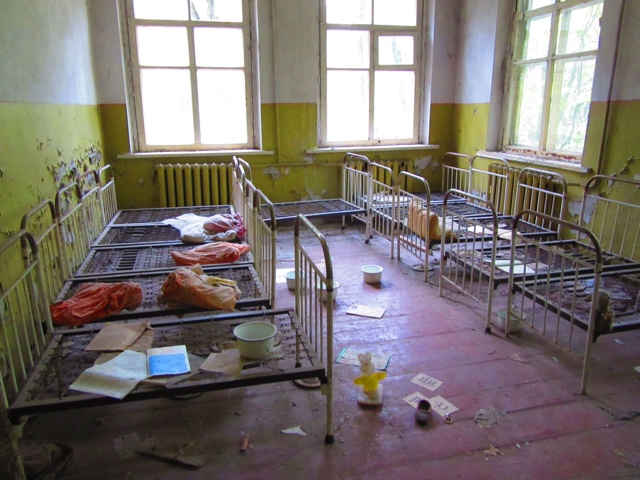 Each village has a World War II Memorial.  Kopachi is no exception- 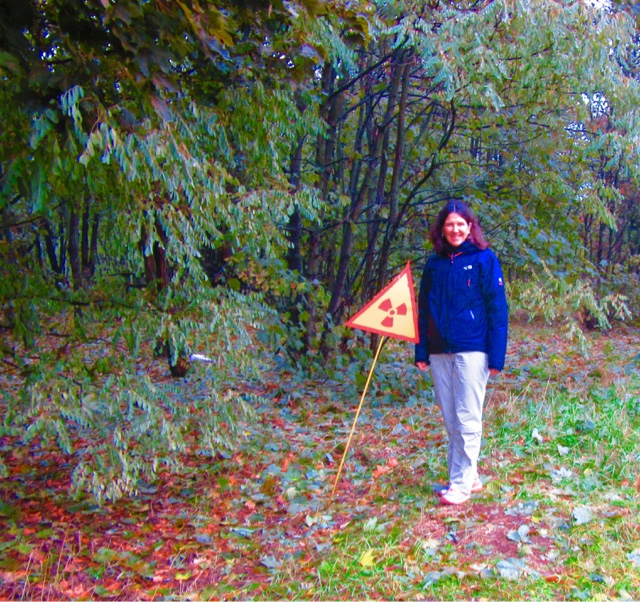 In Prypiat, 43000 people were evacuated the next day.
An abandoned apartment building- 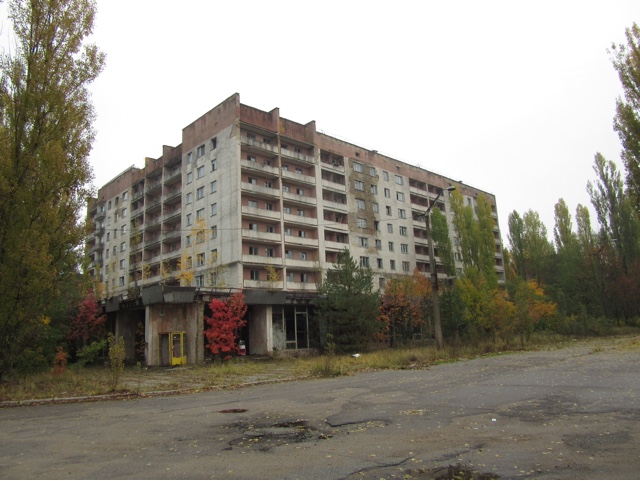 The gym and the swimming pool- 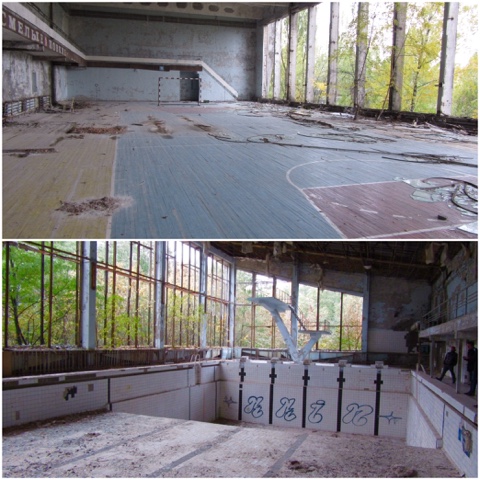 The cultural center with a deteriorating mural- 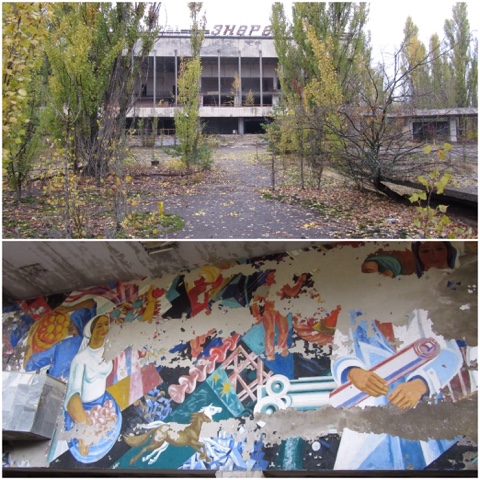 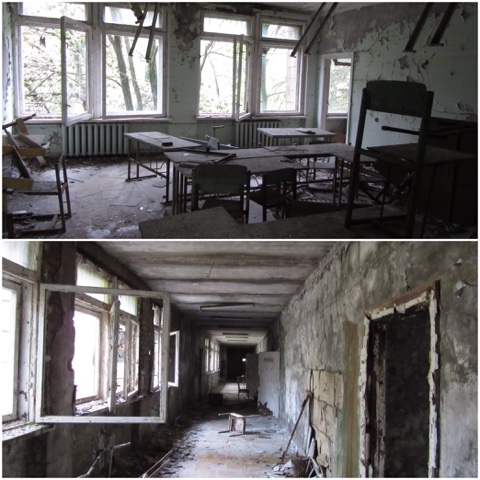 The amusement park was brand new April 26 but not yet open.  People had heard there had been some sort of 'accident' at Reactor #4 but to distract them, the park was opened but only for one day-
Ferris wheel and bumper cars- 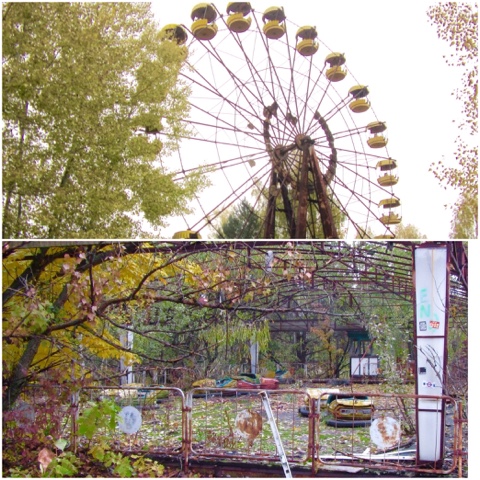 Today, people work in Chernobyl at various jobs.  Most have a 4 day work week and go 'home' on their off days.  Former apartments are used as dorms.  Leaving the area, we had to stop twice and stand in a machine to have our radioactivity read.  We all passed and so did our vehicle.
Along the way....
October 25 is local voting day so portable voting booths are set up around the area- 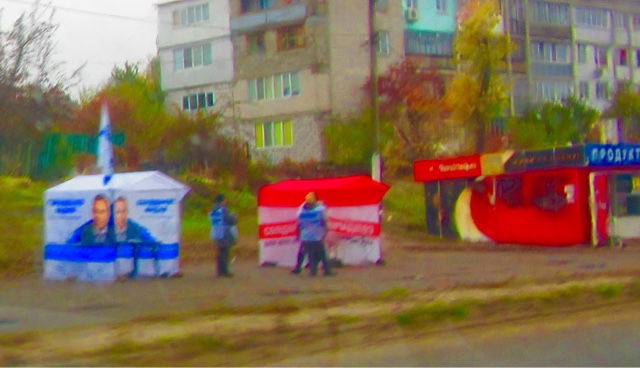 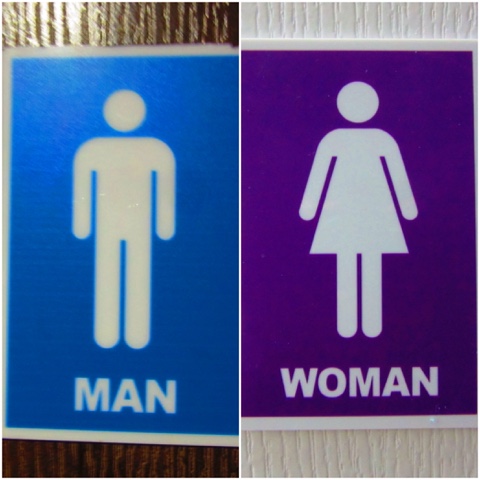 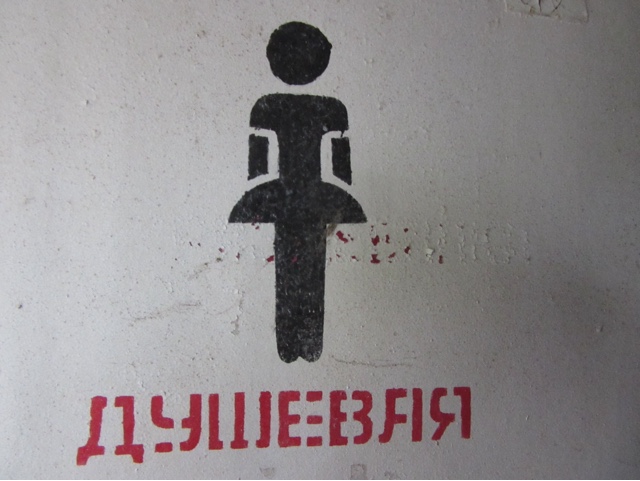 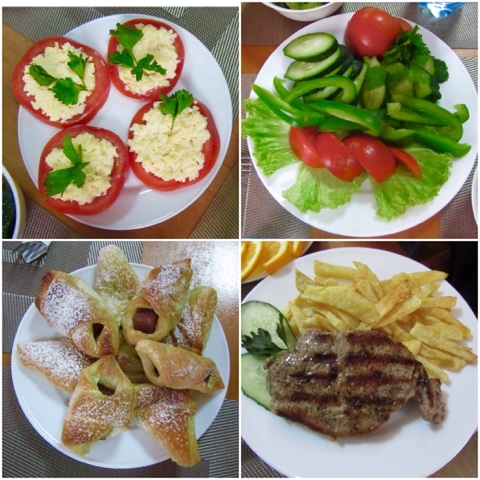 It was a great idea to spend the day in Chernobyl and driving around Kiev.  Looking forward to Amman, Jordan later this evening!
at October 23, 2015