Jerash is a Roman creation of well preserved remains of all the classical Roman structures dating from 2000 years ago.  At first sight, it was 'just another pile of rocks!', but now, looking back at my pictures, I think "wow!"  imagine when it was in it's hey dey!
Hadrian's Arch was built when Emperor Hadrian came to visit.  That would be quite a welcome!  Today it's 13 meters tall but was twice this when first built- 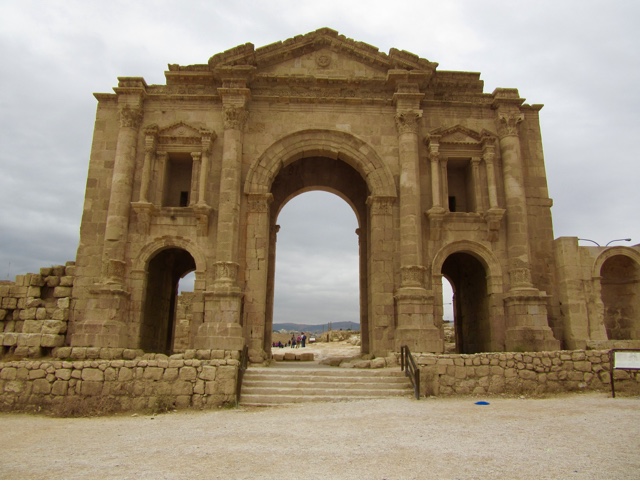 The columns are beautifully carved with acanthus leaves- 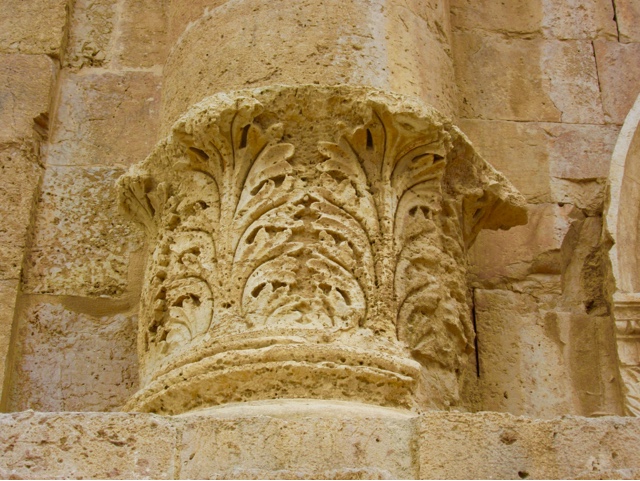 The Hippodrome is an ancient sports field that could seat 15,000.  The chariots came out of the arches- 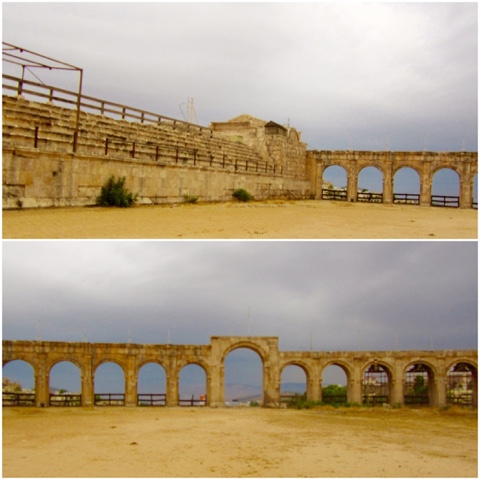 Over the years it was used for a pottery workshop, for polo matches and for gladiator fights.
The Temple of Artemis, the goddess of fertility and hunting, as well as the daughter of Zeus, was built between 150-170 AD.  The whole place was clad in marble and the niches were filled with statues of Artemis.  When Pagan temples were dismantled in 386 AD, it was picked apart for materials to make new churches!  Later, the Byzantines (members of the Eastern Orthodox Church) used it as a workshop- 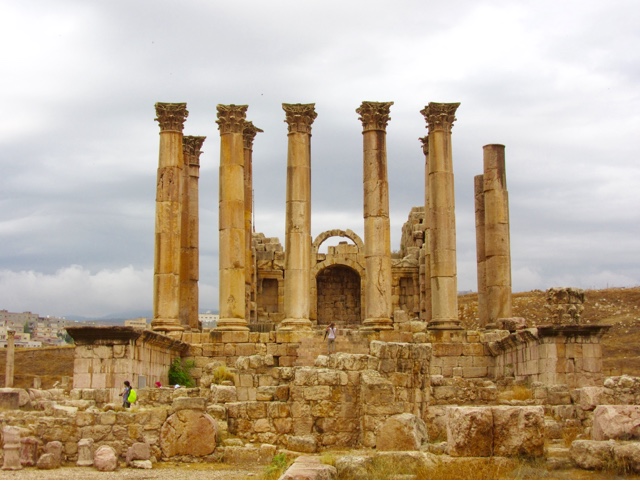 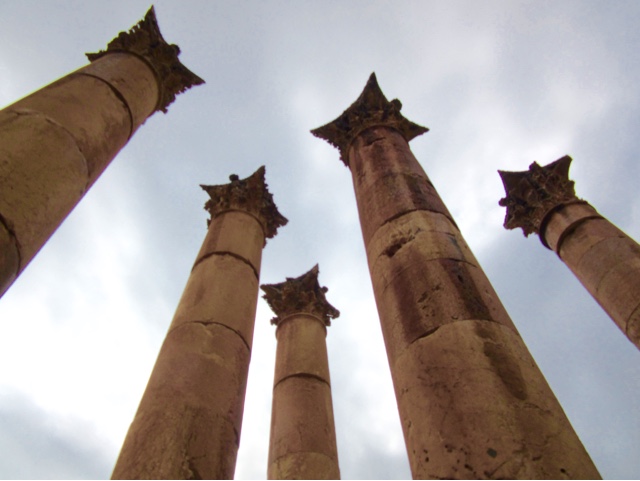 The Forum served as a marketplace and the center square.  It was made in the 1st century and there are 56 unfluted Ionic (scroll shapes on either side of the capital) columns- 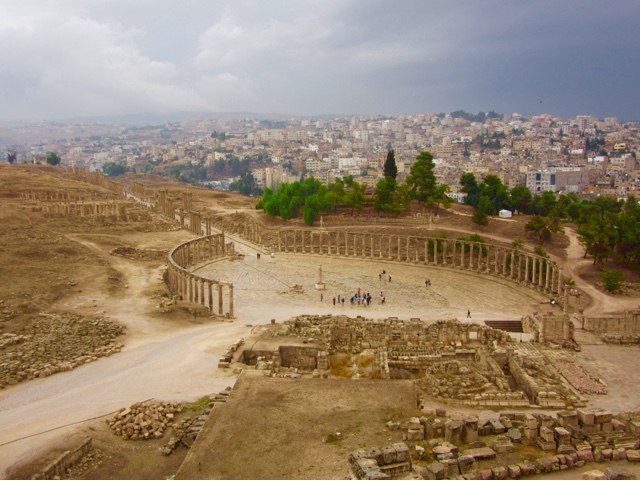 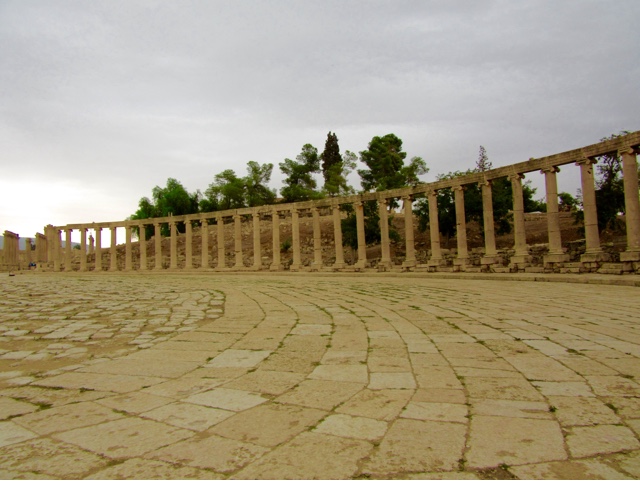 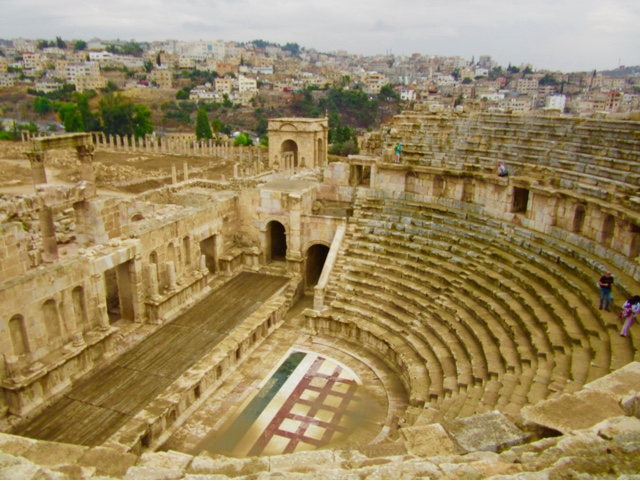 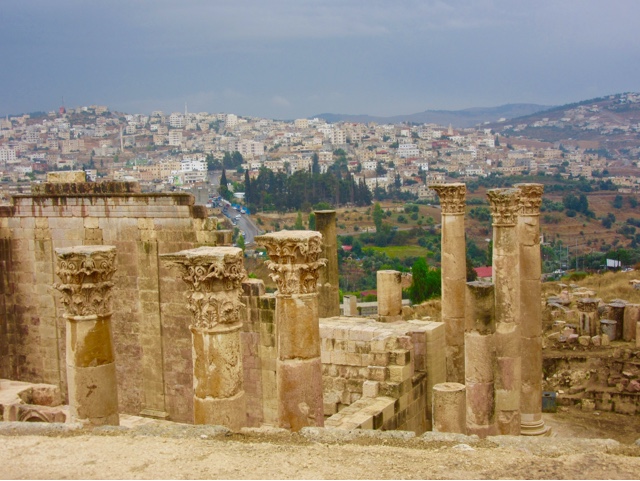 The Cardo Maximus is the main street and it is really cool.  It's 800 meters of columns and a rutted street of flagstone from thousands of chariots- 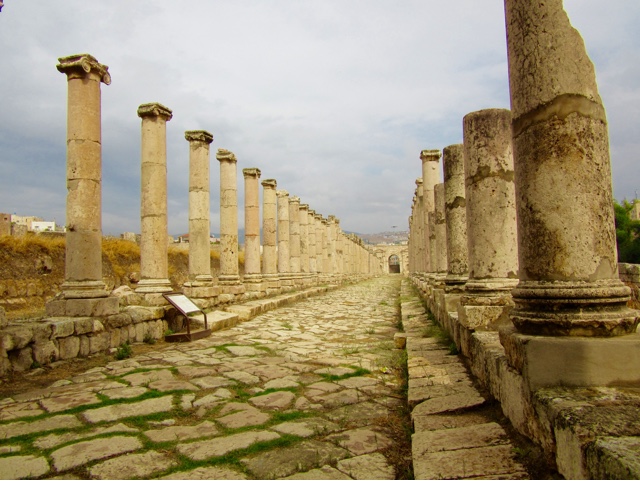 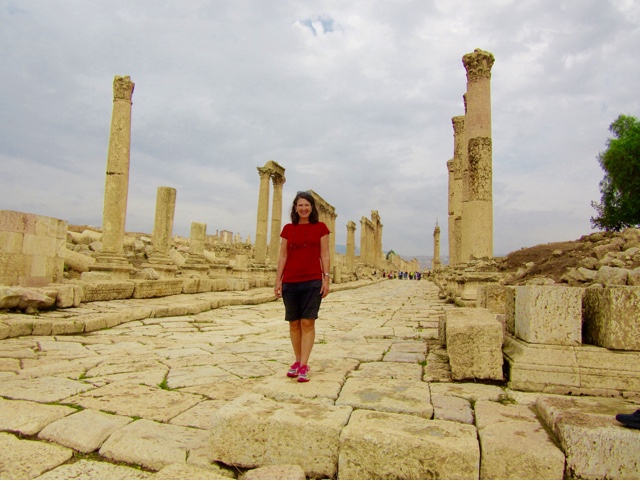 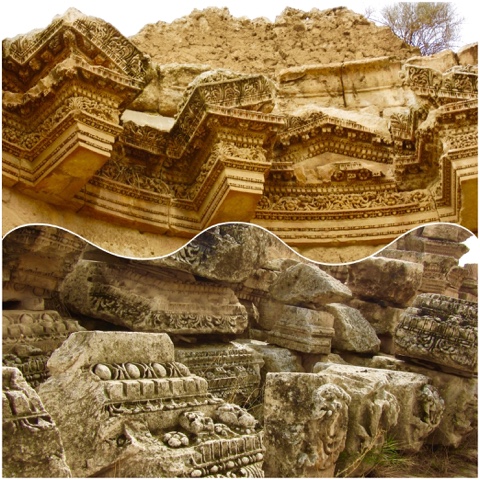 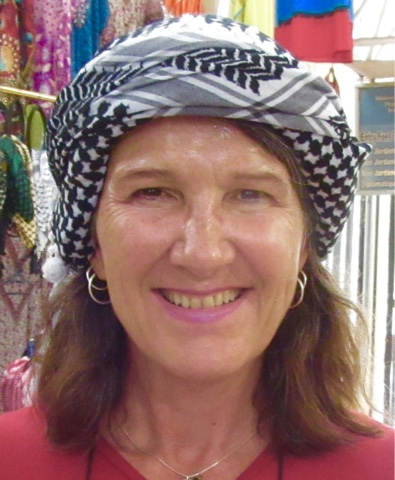 A little bit of home- 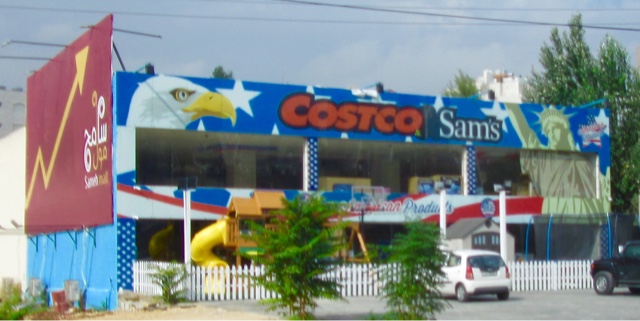 On the other side of the Dead Sea is Israel and the city of Jericho, the oldest city in the world.  The water feels oily and it's no wonder as it contains bitumen.  It's 408 meters below sea level and 390 meters deep.  It's really a lake, not a sea that is 3 million years old.  It shrinks half a meter/year because of evaporation and the demands of the potash industry.  It's dropped 27 meters so the "Peace Conduit" project is set to soon open, piping water from the Gulf of Aqaba to raise the water level- 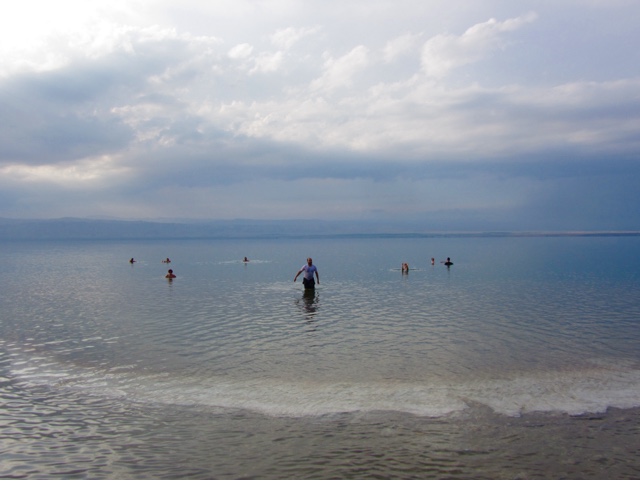 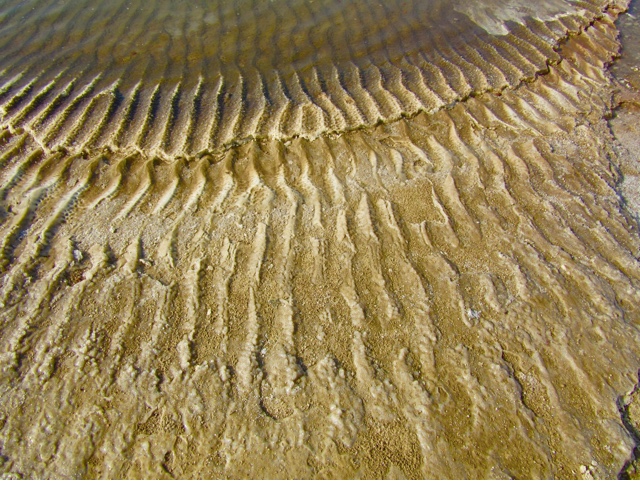 It's 31% salt because of the high evaporation rate.  I was super buoyant- 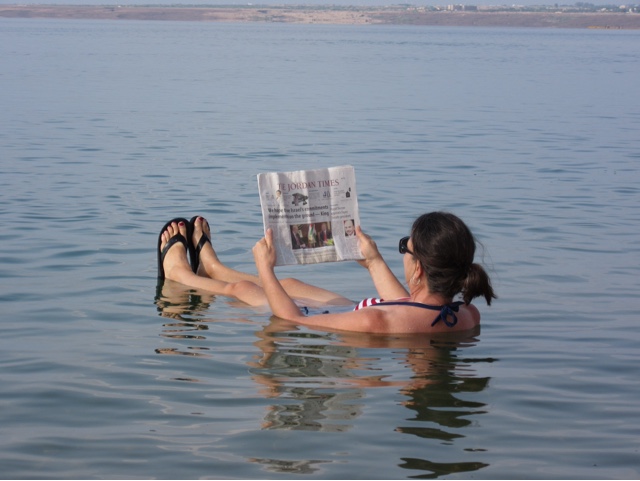 The mud is well known for its healing properties- 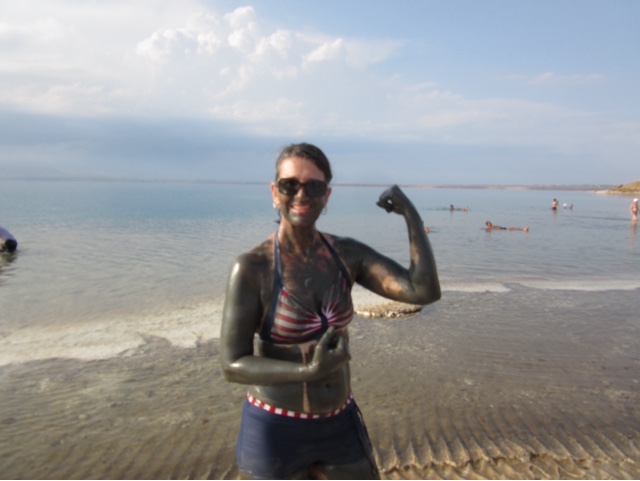 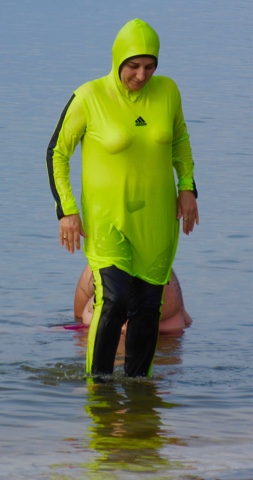 Supper was grilled minced lamb and chunks of beef with grilled onions and tomatoes.  It was very tasty- 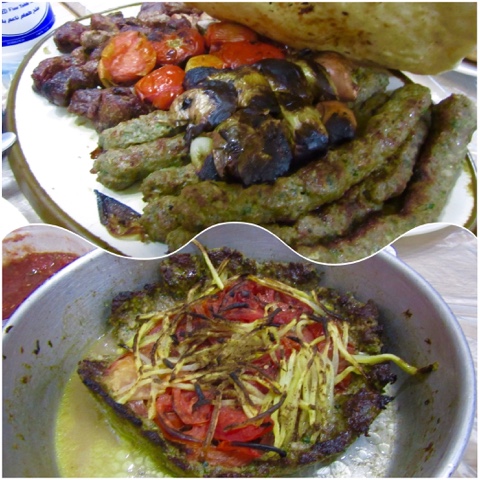 At the Pantastic Ice Cream shop, once flavouring is added to cream, the man went to work and 'made' the ice cream on a freezing cold pan.  It was delicious- 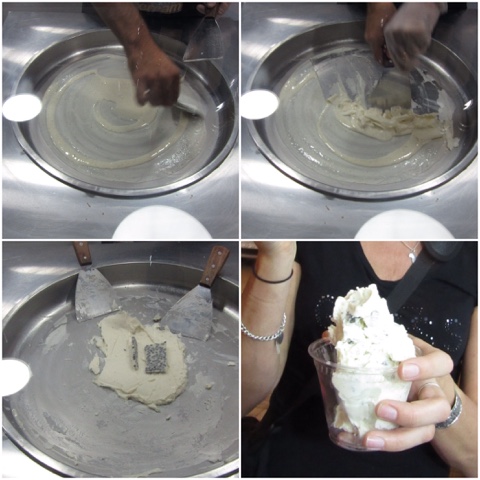